HOME Is Coffee Weird in Japan? From Trendy Cafes to Crazy Vending Machines - We Check it Out! 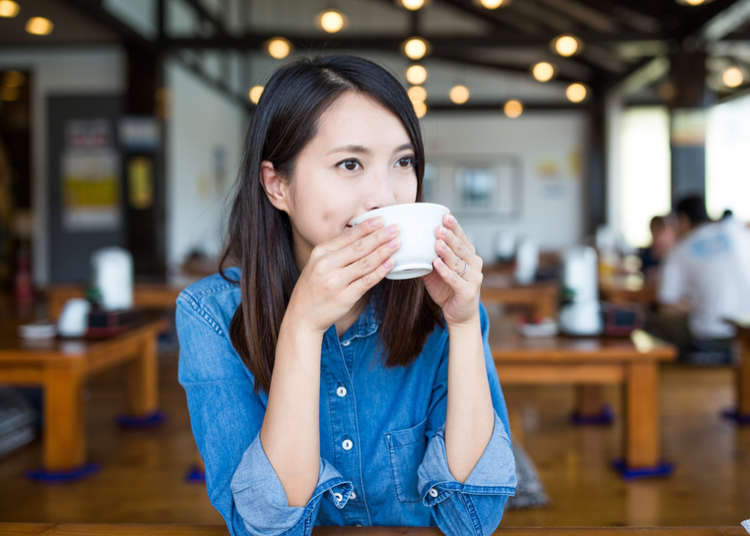 Is Coffee Weird in Japan? From Trendy Cafes to Crazy Vending Machines - We Check it Out!

A hot drink which Japan is most famous for is of course green tea, or if you like alcohol you might have thought of sake, but another hot bevvy which is a big part of Japanese life – and probably life across the planet – is coffee! Today it is a drink which has shapes the social life of many Japanese people, and for coffee shop owners the transition of the coffee bean to a delicious brew is a true art form. 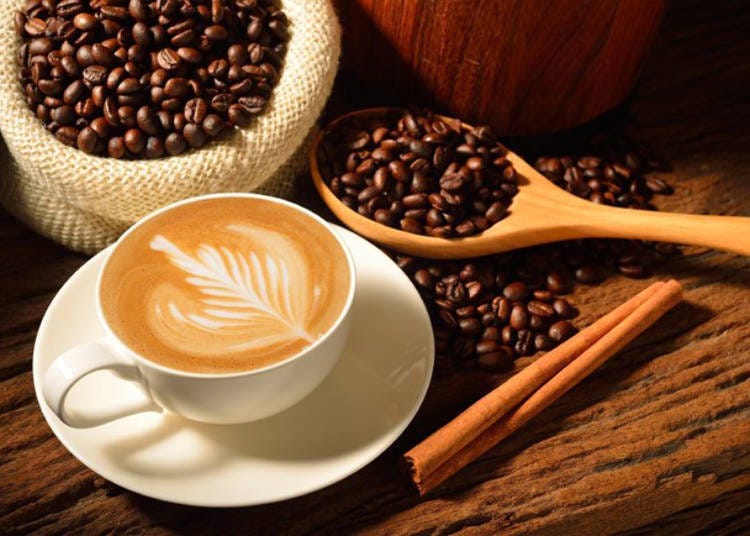 Coffee arrived in Japan over four hundred years ago along with Dutch and Portuguese traders, for this reason its name is very similar in Japan - kouhii (コーヒー). However it wasn’t until the Meiji Period that the first coffee houses were opened, partly because of foreign demand for coffee, and partly because of it being a new social scene for young Japanese people.

Coffee is also partly responsible for the strong connection between Japan and Brazil as just over a hundred years ago these two countries signed a treaty which allowed Japanese migration to Brazil in return for an increase in trade, such as coffee beans, and even today Brazil is Japan’s largest trading partner for both coffee beans and instant coffee. Today the coffee industry is massive in Japan with a variety of different types of coffee to be found from street corner vending machines, to convenience stores and trendy cafes. 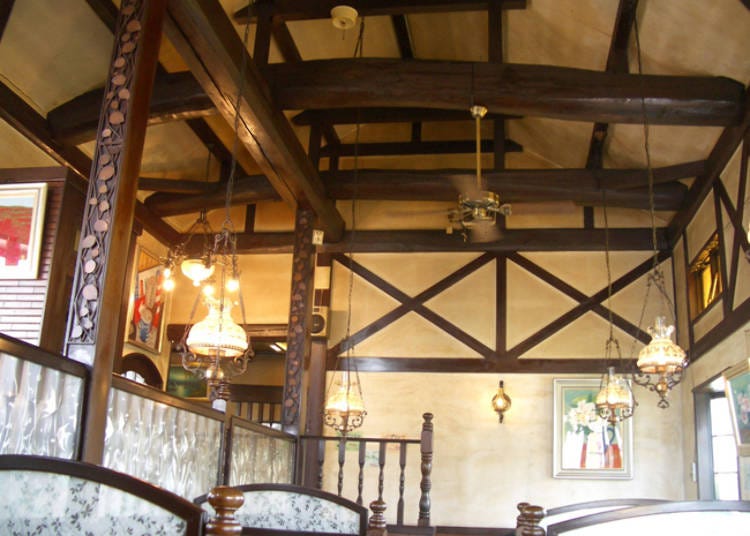 A café in Japan is known as a kissaten, and today they are very popular for enjoying a hot cup of Japanese coffee, a slice of cake, or a bite to eat while listening to music or having a business meeting. It was probably in the 1980s that Kissaten culture peaked with the bubble economy, but even today there are a number of these old-school coffee shops still around, imbued with a sort of Showa-era charm that’s definitely worth a visit for any coffee enthusiast. The more contemporary version of the kissaten are the modern coffee chains, which while they include major western coffee chains, there are also numerous Japanese clones. Probably after convenience stores, which are everywhere, a café is the second type of shop that you are most likely to come across. 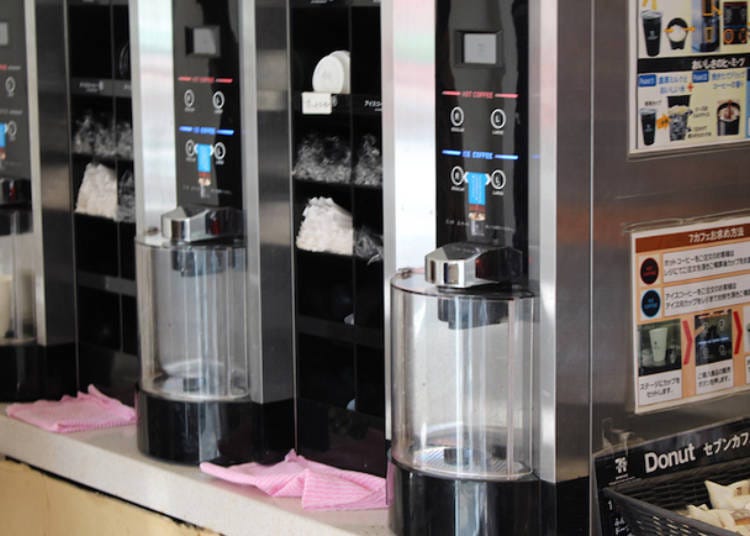 Getting a freshly brewed cup at a convenience store

It must be said however that there is a lot to be said for the coffee sold in convenience stores which is made by automated coffee machines that work at the touch of a button. The coffee sold in these stores is cheaper than that found in a café or coffee chain and the various convenience store brands have been under stiff competition with each other, installing machines that are capable of producing a fresh cup of coffee for less than two hundred yen. Though, even if you don’t see a café or a convenience store, you will definitely see a vending machine stocked with both cold soft drinks and hot coffee drinks. It just goes to show how developed the vending machine culture is in Japan!

In recent years a new kind of sophistication has been applied to coffee with the growing popularity of “third-wave coffee.” This is a movement that treats coffee not as a drink of convenience, but as an artisan beverage like fine wine or craft beer. In connection with this, but also in many old-fashioned cafes, skillful baristas are applying the same obsessive dedication and focus to their craft attached to traditional Japanese arts such as tea ceremony, calligraphy, and even swordsmanship. It’s not unknown for Japanese baristas to spend several years working in countries like Australia to improve their craft and latte art technique. In addition to working at kissaten, third-wave coffee baristas are founding their own independent coffee houses, often using traditional kissaten equipment.

How Coffee Is Prepared in Japan 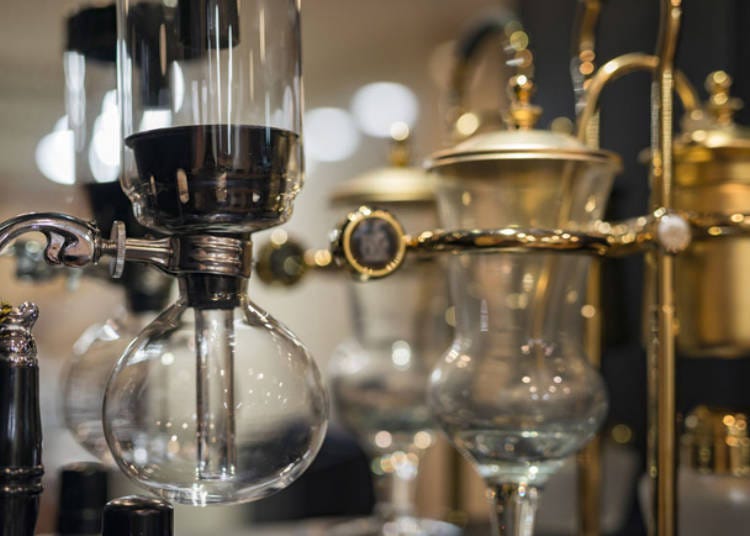 The siphon method and the pour-over are two traditional kissaten techniques, which are now being imitated by third-wave coffee shops the world over. Japanese pour-over coffee uses a long-necked kettle from which hot water is slowly poured over freshly ground coffee, in contrast siphon coffee uses a two-pot apparatus and a vacuum brewing method. Both methods brew a no-frills cup of coffee that draws incredible flavor from the beans.

Rather surprisingly, even behind the counter of even the tiniest independent coffee house in Japan, you might be rather taken aback to see top-of-the-line Italian espresso machines, which is perfect if espresso and lattes are more your thing! These machines force a high-powered stream of hot water through finely ground beans, resulting in a small shot of espresso with a layer of light colored, richly flavorful coffee foam called “crema” on top.

Cold-brew coffee is made by infusing ground coffee in cold or room temperature water over several hours, so it certainly isn’t quite the same as a fast, cheap, coffee from a convenience store. This is actually the oldest coffee brewing method in Japan, introduced by the Dutch in the 17th century. Coffee made this way is sometimes referred to as “Kyoto-style coffee”, after the tall tower-like glass apparatus that were popularly sold in Kyoto for cold-brewing.

Popular Types of Coffee in Japan 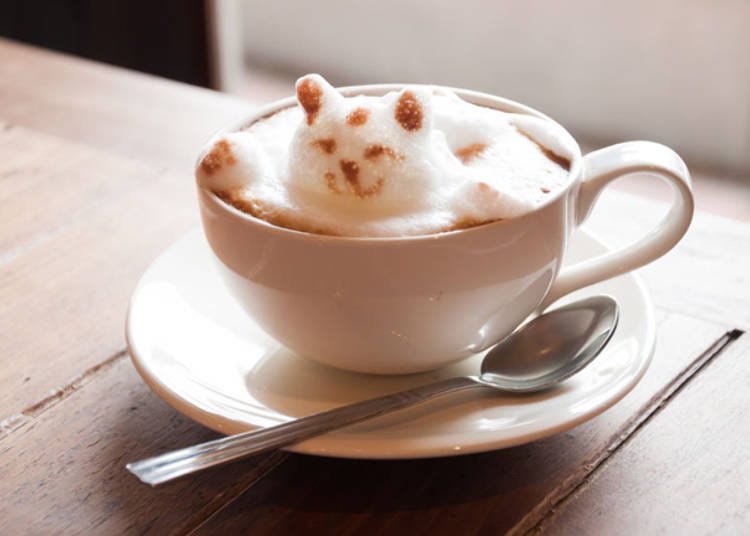 On the street, and train platforms you will see canned coffee being drunk everywhere, this is also the drink normally sold in vending machines. In addition to this you will often see adverts for canned coffee on TV or on posters. For normal working people it is the most convenient and affordable drink to buy, plus there is a big advertising connection putting together working hard and having a nice hot coffee. Vending machines sell both iced and hot canned coffees depending on the season—typically black and unsweetened, although black coffee with sugar, as well as coffee with cream and sugar can also be found in canned form. You can expect to find multiple varieties and brands of canned coffee sold within a single vending machine, and many popular brands of canned coffee in Japan even have advertisements featuring Hollywood celebrities.

If you have a coffee with a lunch set at a Japanese café or restaurant the waitress will ask if you want it as ‘ice’ or ‘hot,’ and actually iced coffee served with a bit of milk or creamer and simple syrup is one of the most popular items to enjoy with a lunch set. This might sound like cold-brew coffee but actually iced coffee in Japan is made with hot water. A small volume of hot water is used for a more concentrated brew that’s poured directly over ice. The hot water extracts the flavor of the coffee beans, while simultaneously melting the ice to balance the amount of water in the brew, which results in an iced coffee with a brighter and more dynamic flavor.

For those with a little more time on their hands, a café latte made with espresso and steamed milk is one of the top drinks enjoyed at Japanese cafés and coffee houses. In the past few years, latte art made by pouring steamed milk in the shape of fern leaves, hearts, and flower petals has started to become popular in Japan. Some Japanese cafés have even put a kawaii spin on their latte drinks with 3D latte art, made with sculpted milk foam in the shape of cute puppies, kittens, bunnies, and even beloved anime characters.

A Cat in My Latte?! Incredible Latte Art at Tokyo’s Oshiage Nyanko Cafe

If you want to experience a bit more of daily life for people in Japan, then one of the best places to start with is coffee. If you have a coffee from a vending machine you can imagine what an office worker feels like, if you go to an old fashioned kissaten then you can partake a little bit of 1980s Japanese culture, while in a modern chain café you can see more of the helter skelter of the contemporary social scene. Regardless of the choice you make, you can enjoy a nice hot, or cold, cup of coffee and watch the world around you.