HOME From Urchin to Plum: 12 Quirky Japanese Pasta Dishes That'll Make You Say 'I Want That!' 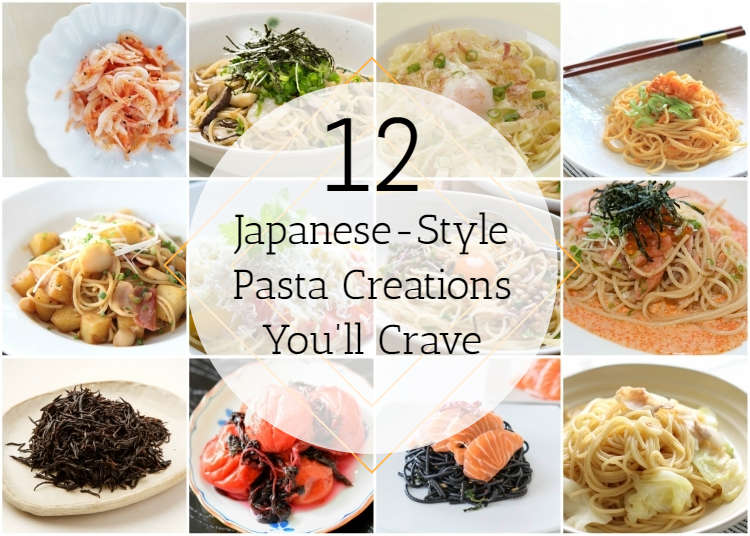 From Urchin to Plum: 12 Quirky Japanese Pasta Dishes That'll Make You Say 'I Want That!'

Visit Japan and you'll encounter a variety of unfamiliar foods - and many quirky fusions as well!

Japanese pasta - known as Wafu pasta - is probably something that you aren’t familiar with, and might have you thinking it has something to do with wafers or waffles, but this is actually a fusion of Japanese and Italian cooking.

During the Meiji period, Japan started to become internationalized, it was at this time that new innovations in recipes took hold such as sukiyaki using beef, and Italian pasta was introduced as well. While it found some popularity at this time, it was really in the post-World War Two period that it became more established as American GI’s brought a demand for Italian-American dishes to Japan.

It has since spread across the country and can now be found everywhere from Japanese homes to family restaurants and convenience stores. While more authentic Italian-style pasta is eaten in Japan, uniquely Japanese-style wafu pasta is also popular.

Wafu pasta features ingredients typically eaten with white rice that are instead mixed with spaghetti noodles. Here’s a guide to some of the most popular varieties! 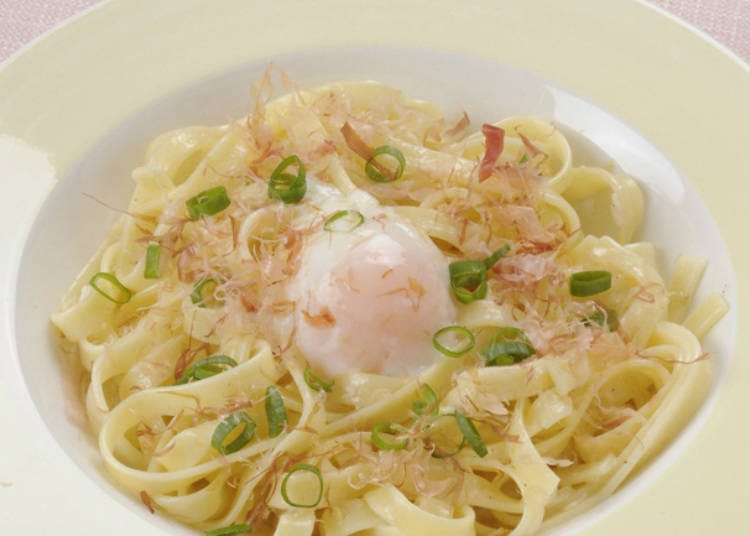 Katsuobushi is a kind of tuna which has been dried, fermented, and smoked; another name for it is bonito flakes, although that is when young bonito have been used as a substitute for tuna.

Katsuobushi and similarly prepared fish are also known as okaka, so you can see there are different names for the same thing! However, the most important point is that the distinct taste that comes from these flakes is due to its high inosinic acid content, and characteristically if you put it on hot food then the heat from the food will cause the flakes to move. 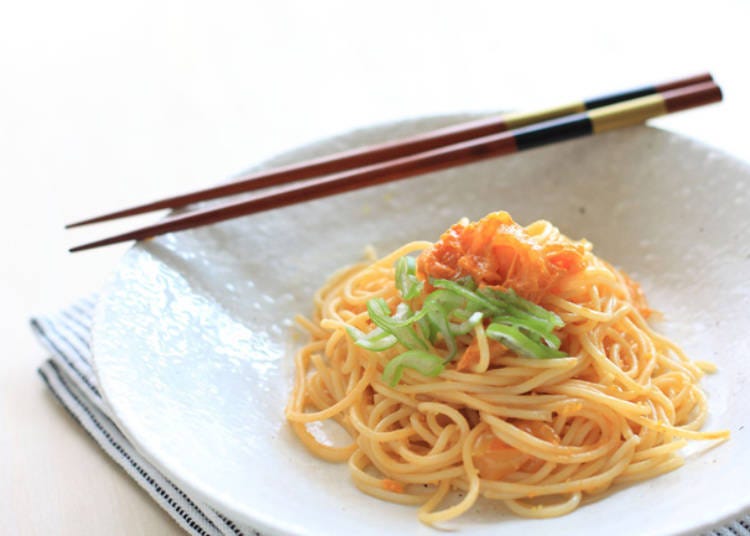 Uni (oo-nee) is the Japanese name for the edible part of the sea urchin, or more specifically the animal’s gonads. It has a range of colors, from a rich gold-like sheen to a very light yellow, but it is its texture which people can love or hate as it is quite creamy.

Uni is a huge delicacy in Japan, which luckily for the Japanese is home to a number of top-quality species of it. Uni pasta with cream, sake, and butter are a delicious type of Japanese pasta. 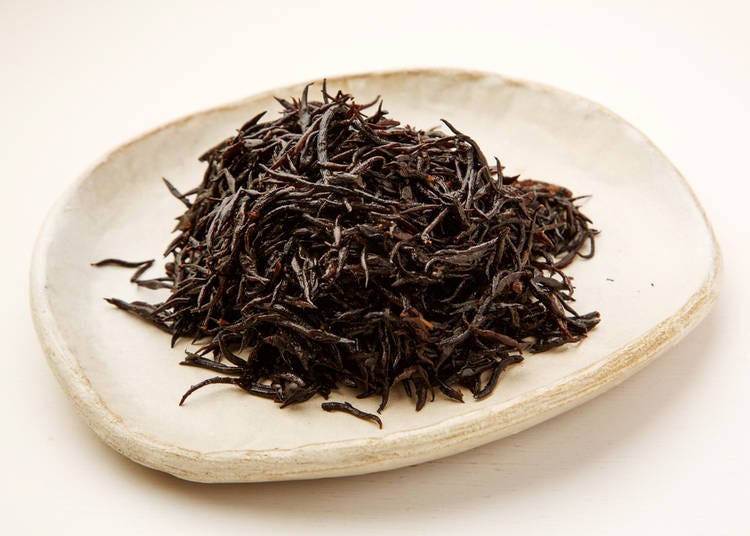 Hijiki is a brown seaweed that can be found growing wild on the rocky parts of coasts around East Asia and it has been part of Japanese cuisine for hundreds of years. It is believed that it aids health and beauty, and it is rich in fiber and minerals such as calcium, and magnesium.

It is normally sold dried; this can then be reconstituted with water before eating and cooking. It has an earthy, nutty flavor. Try hijiki in an olive oil based pasta with crunchy pickled ume plum and diced spring onion. 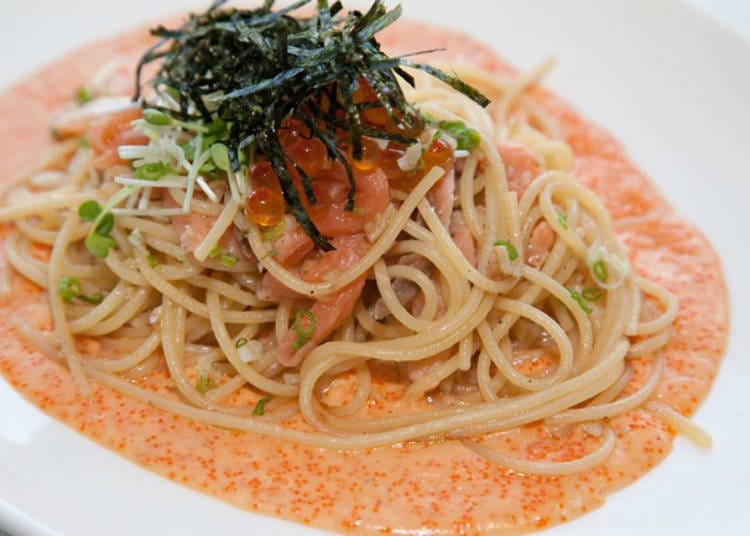 Mentaiko is made by marinating cod or pollock roe with chili peppers; it originates from Korea where it is known as myeongnan-jeot, and it came to Japan via an enterprising businessman who modified the Korean version to make it more appealing to Japanese consumers and called it mentaiko.

There is a milder, and much less spicy version in Japan as well, this is called tarako. When mixed into pasta, mentaiko creates a delicate pink colored pasta with a creamy, briny flavor and touch of spice that goes well with shichimi togarashi red pepper. 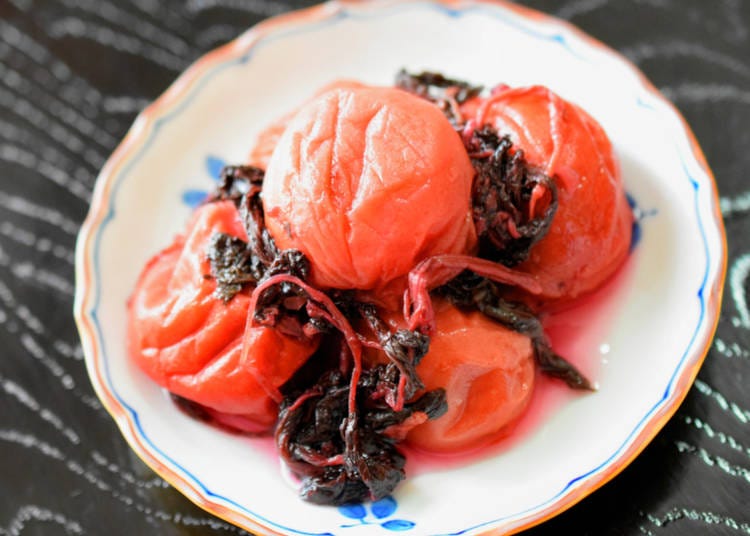 Pickled plums are known as umeboshi in Japan, it comes from the Ume tree which is actually more closely related to the apricot. They are extremely salty and sour, though there are different versions such as a sweet umeboshi pickled with honey.

Umeboshi is a very popular ingredient in Japanese cuisine, and can be eaten raw or cooked. As it is so sour it makes a deliciously tart paste for pasta sauce. Try it with a chiffonade of shiso (perilla herb) and toasted sesame seeds. 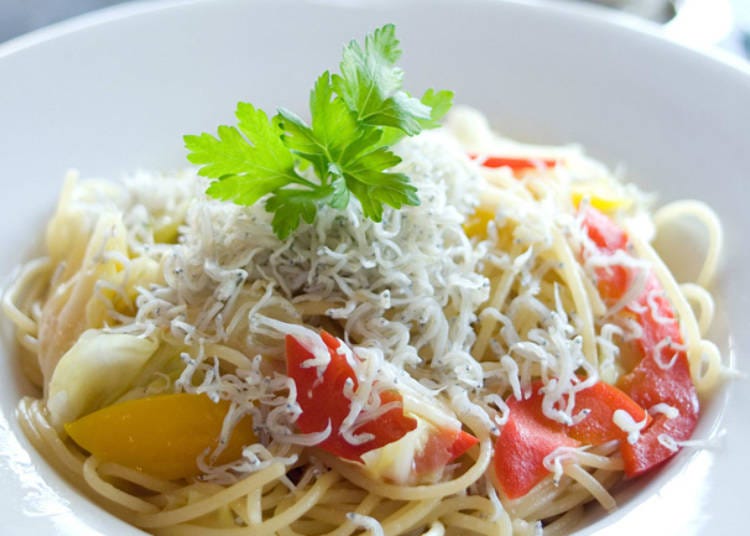 Shirasu is a popular ingredient for home cooking that consists of tiny baby sardines or anchovies. Kanagawa Prefecture’s Kamakura and Shonan areas are famous in Japan for this ingredient which can be eaten raw, or boiled and dried.

It can really add texture to a Japanese pasta dish as a delicate crunchy topping that goes well on pasta with roasted red peppers and cherry tomatoes. 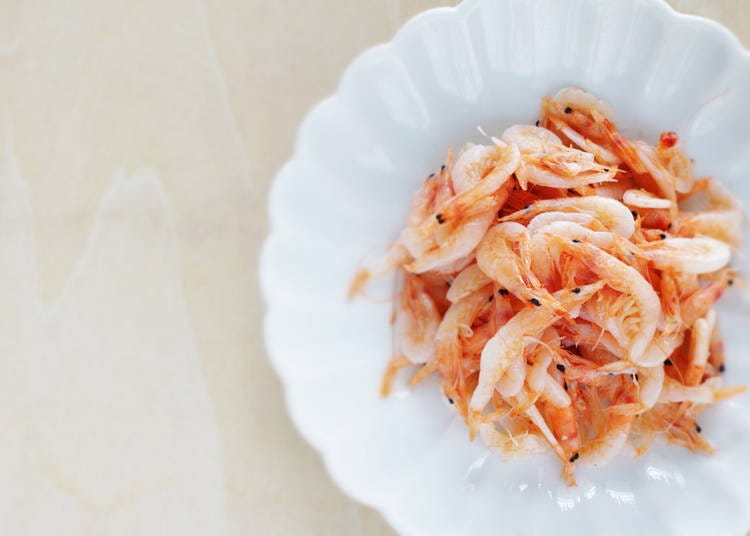 Sakura ebi are tiny dried shrimp harvested from Suruga Bay in Shizuoka prefecture that are called “sakura” for their delicate pink color. The drying process concentrates the umami savoriness of the shrimp, adding a boost of flavor to any dish. For a tasty Japanese fusion food, try sakura ebi tossed in olive oil and diced chives. 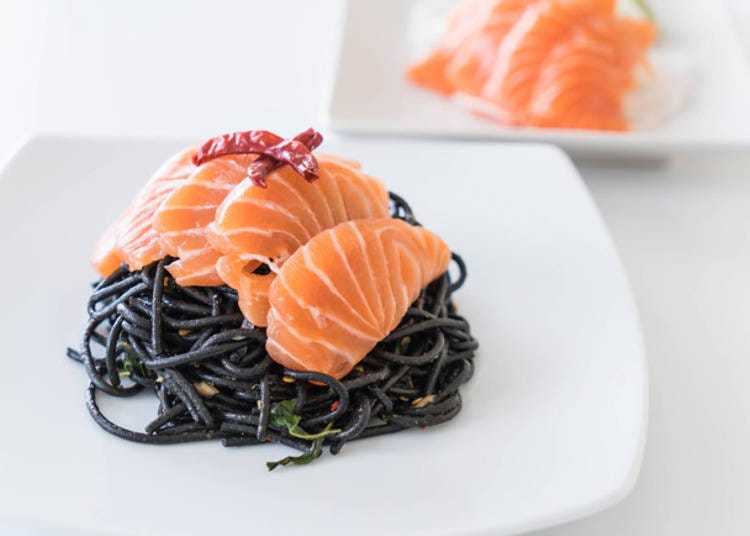 Sashimi normally refers to thinly sliced fish, a kind of seafood preparation which has been in use in Japan for hundreds of years and which today is a popular dish.

In Japanese cuisine it is considered as the finest dish in Japanese formal dining. While sashimi is typically eaten alone with soy sauce or ponzu dressing, salmon sashimi makes an excellent topping for black squid ink pasta. 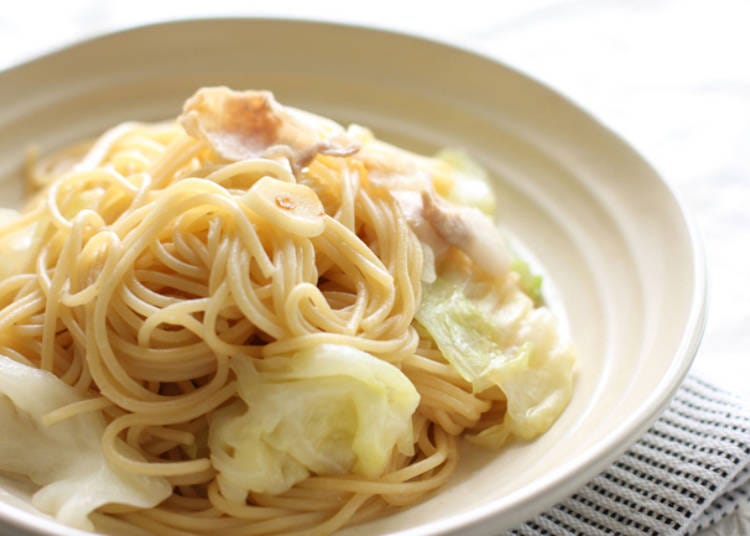 A common snack in Japan is thin strands of semi-dried and seasoned squid, otherwise known as saki ika. This type of snack was derived from a traditional kind of dried squid called surume. Pasta with squid wouldn’t be that unusual in Italy, but in Japan there is a uniquely Japanese style pasta which is made with this popular snack.

Known as “saki ika”, Japanese dried squid can be eaten as-is with beer or used as an ingredient in cooking. Saki ika goes excellently in wafu pasta with sauteed cabbage and spring onions. 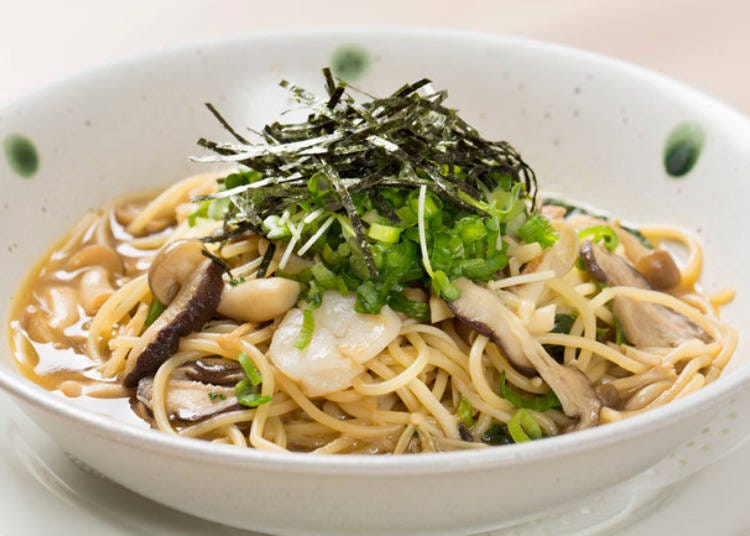 Soy sauce is a liquid made from a fermented paste of soybeans, roasted grain, brine, and Aspergillus oryzae or Aspergillus sojae molds. For westerners it is probably most associated with sushi as it is served as a dipping sauce. It was actually created over two thousand years ago in China before spreading all over Asia as a popular ingredient for cooking and condiment. 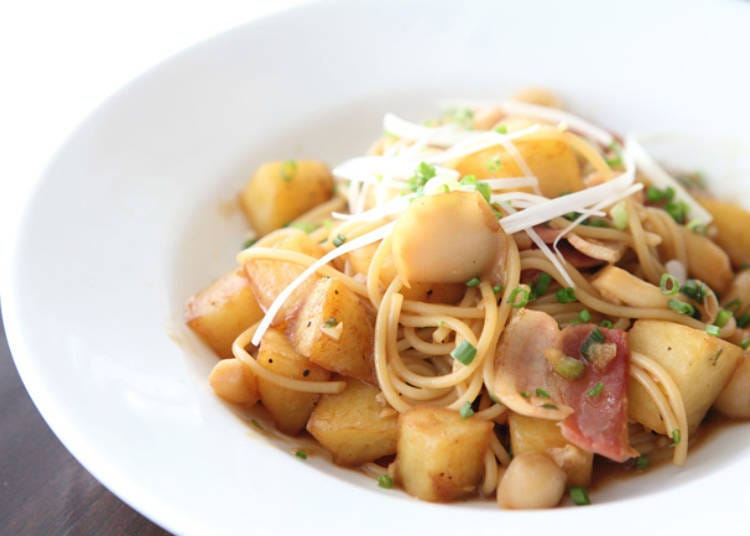 Miso is a traditional Japanese seasoning produced by fermenting soybeans with salt and koji (a kind of fungus), and sometimes with rice, barley, or other ingredients. The resulting thick paste is used as an ingredient to make sauces, pickle vegetables or meats, or it is mixed with dashi soup stock.

Perhaps the most famous miso dish is miso soup. Miso makes an excellent base for sauces and glazes and is delicious in pasta. A creamy miso sauce pairs well with ingredients like crispy bacon, grilled scallops, and potato. 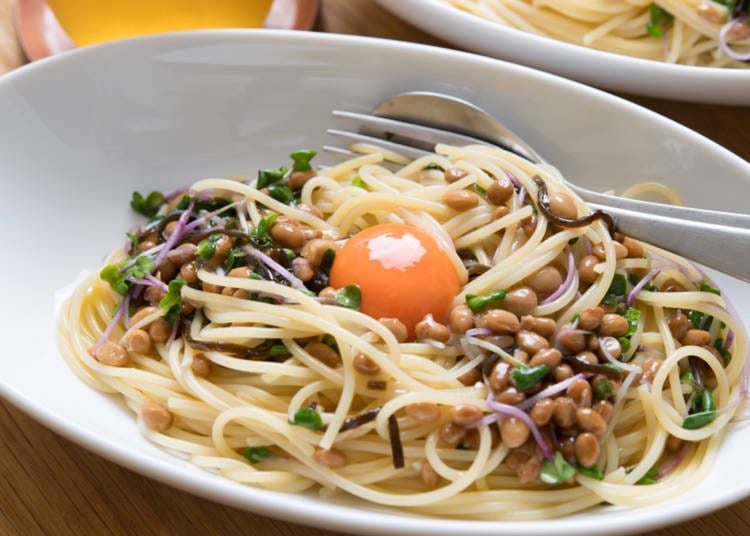 Natto is perhaps a unique Japanese food which everyone either loves or hates; it is a traditional food that is made from fermented soybeans. Many people outside of Japan are put off by its smell, and slimy texture, so it is bit of an acquired taste.

If you’re a fan of natto, then you’ll be sure to enjoy it in wafu pasta with sliced okra, yuzukosho (yuzu paste), sesame oil, and mentsuyu noodle sauce, garnished with nori seaweed strips. It’s a combination that tastes great whether it’s on Italian spaghetti or traditional Japanese noodles like thick udon, soba buckwheat noodles, and thin somen.

Wafu Pasta - A Tasty Example of the Creativity of Japanese Fusion Food!

In Japan you can find a lot of Italian food, whether that is genuine Italian pasta, wafu pasta, authentic pizza or pizza with some rather unusual toppings! Japan is a food tourist’s heaven, you can try all kinds of pasta dishes including the ones introduced above, and as food is always presented beautifully in Japan you can take some awesome photos for your social media accounts.

Japan is always associated with sushi and ramen, but you can go on an amazing pasta journey!

Quick & Easy Japanese Recipes! Cooking the dishes of Izakaya Nobu
9 Curious Takes on Italian Food in Japan – According To an Italian Expat!
Shopping at Keio Store: 10 Japanese-style Pasta Sauces to Expand Your Palate!
*This information is from the time of this article's publication.
*Prices and options mentioned are subject to change.
*Unless stated otherwise, all prices include tax.