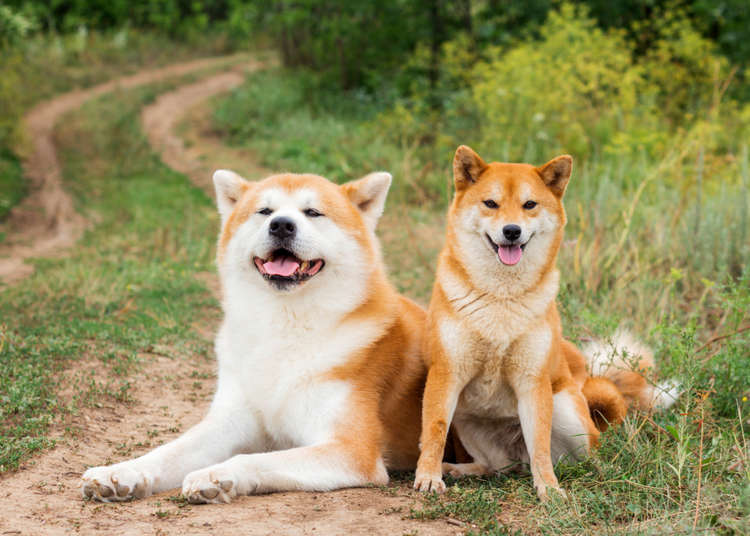 There are 6 Japanese dog breeds that are called "Nihon-ken" and are treated as Japan's national dog. The Nihon-ken include: Shiba Inu, Kishu Ken, Shikoku Ken, Hokkaido Ken, Kai Ken and Akita inu. (Akita Inu is the type of dog well-known as "Hachiko"!)

This standard was determined in 1934 by the Nihon-ken Hozonkai, a Japanese public organization that's responsible for preserving and maintaining registries for the six native Japanese dog breeds.

Here we'll share all about each of the 6 authentic Japanese dogs, plus give helpful information to people who want to have a Japanese dog as a pet - and even typical names for Japanese dogs!

Akita Ken
Hachiko, the adorable pup whose legacy lives on as a Japanese dog statue in Shibuya, was an Akita Inu.

Hokkaido Inu
Thought to have an older bloodline among the Japanese dogs, they have a thicker outer coat, larger paws, and smaller ears.

Kai Ken
The Kai Ken is one of the most distinctive of the original Japanese dog breeds; nicknamed the "tiger dog" from their coat colors.

Kishu Inu
A hunting dog that's still relatively rare even in Japan, they are intelligent, brave and independent, but also quite impulsive.

Shiba Inu
Arguably the most popular Japanese breed, the Shiba Inu is a Japanese national treasure.

Shikoku Ken
The Shikoku Ken is a beautiful Japanese spitz-type breed with a wolf-like appearance. 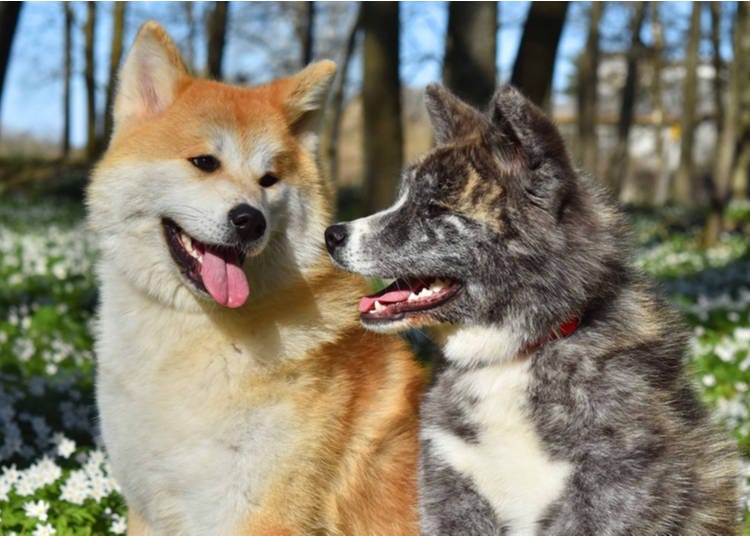 Have you heard of Hachiko - the adorable pup whose legacy lives on as a Japanese dog statue in Shibuya? Then you know about the Akita Inu.

Another well-known Japanese breed is the Akita Inu. But unlike the Shiba Inu, the Akita Inu is larger and bulkier.

You will not see many of this breed the city. Akita Inus are part of the spitz family and, therefore, have traits that are ideal for cold weather such as thick, long fur and a double coat. They have a bear-like face and large bone structure.

The Japanese Akita can be sesame, brindle, red, fawn, or pure white, but must have urajiro markings on the chest, cheeks, and tail areas.

Akita Dog: The adorable Japanese dog breed that the world cannot help but love!
Hachiko: The Legend of Japan’s Most Faithful Dog 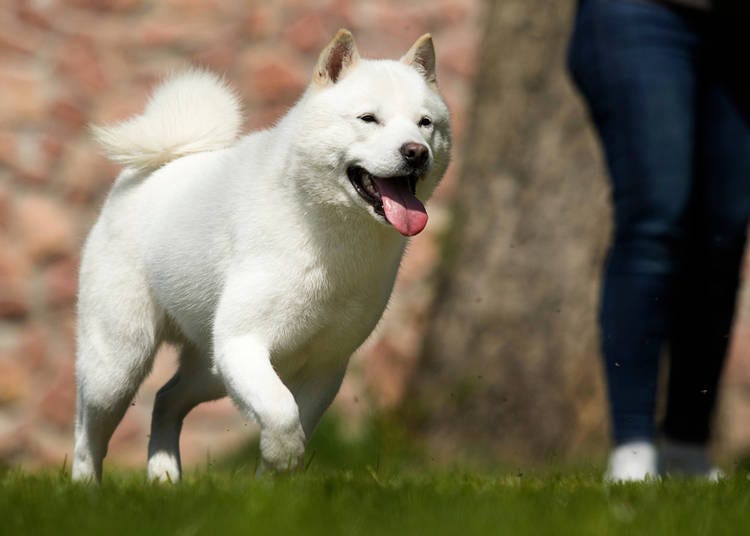 The Hokkaido Inu (or Hokkaido Ken) is believed to have an older bloodline compared to the other Japanese dog breeds. From Japan's northernmost island, the Hokkaido Inu has a thicker outer coat, larger paws, and smaller ears to help them cope with the frigid cold.

Intelligent, strong, and devoted, the Hokkaido Inu had been bred to be hunting dogs, capable of managing wild boars and even small bears. As a result, they continue to be very strong-willed breed and may show aggression toward other dogs. They tend to develop a very strong bond with their owners and require a fair amount of attention. 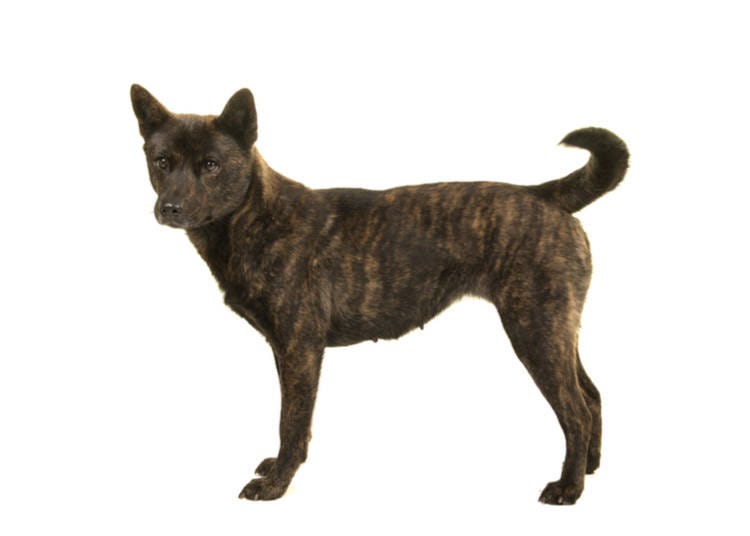 The Kai Ken is one of the most distinctive of the original Japanese dog breeds. It's easy to know why they are affectionately nicknamed the "tiger dog" from their coat colors.

The Kai Ken were bred to be hunters of wild game, including boar, deer, and fowl. As the breed originated in Japan's mountain regions, they evolved to be quick, with well developed muscles. They are also incredibly intelligent, quick learners, and tend to be fairly independent, though they love to please their owners.

Given their roots, the Kai Ken is a very active dog with an intact hunting instinct. As a result, you'll want to be sure you don't walk a Kai off-leash, as they'll likely scent out something more interesting! 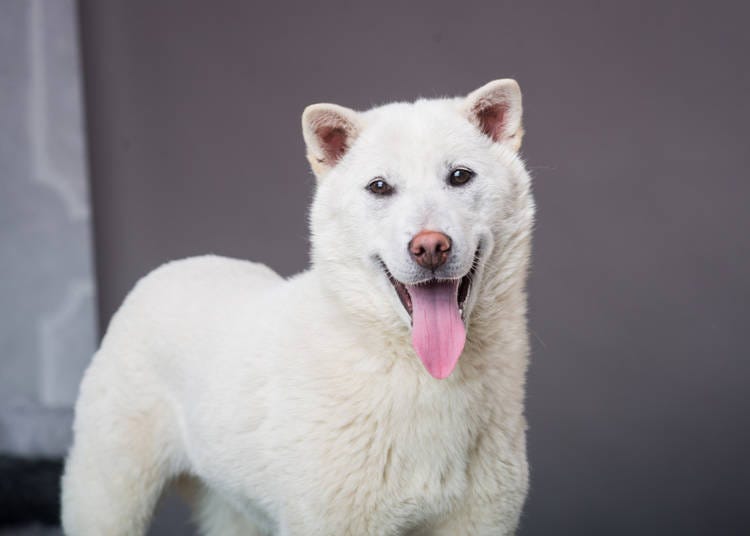 The Kishu Ken is a hunting dog that's still relatively rare even in Japan. According to one Japanese legend, the Kishu Ken actually descended from wolves.

In terms of temperament, they are intelligent, brave and independent, but also more impulsive than the other Japanese dog breeds. They have a strong natural hunting instinct and should not be left alone with other smaller pets as a result. They love being active and outdoors, but be careful: their intelligence also makes them excellent escape artists! 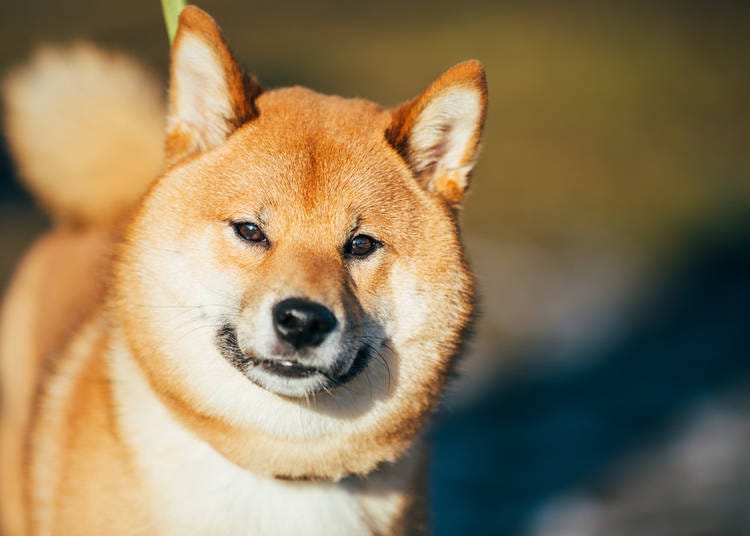 Arguably the most popular Japanese breed, the Shiba Inu is a Japanese national treasure. The Shiba is the smallest of the spitz breed of dogs in Japan.

Recently, however, smaller Shibas have been used to breed a cuter and more apartment-friendly unofficial ‘mame’ size, or bean-sized Shiba - certainly a cutie among Japanese dogs.

Shiba Inu have small pointy ears, a wedge-shaped snout, and a curled tail. 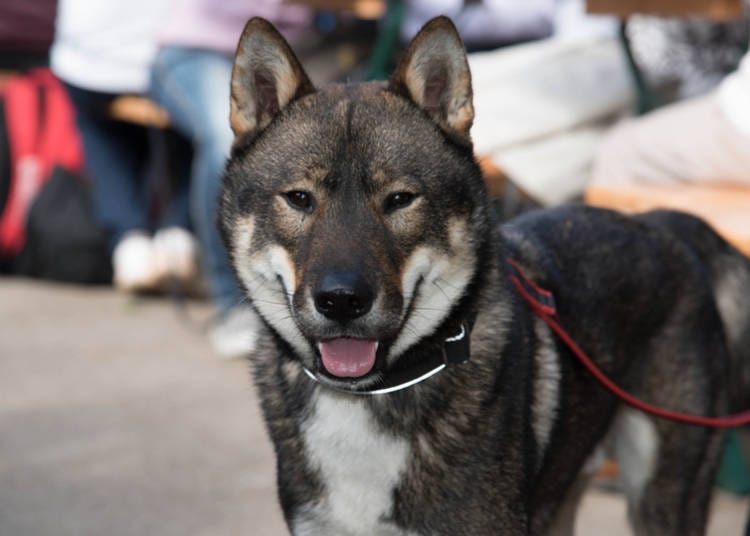 The Shikoku Ken is a beautiful Japanese spitz-type breed with a wolf-like appearance.

Like its smaller cousin, the Shiba, the Shikoku dog is a national treasure of Japan. This bread is extremely rare and is hard to find, even in Japan.

Shikoku Kens are known to be easier to handle than Shibas and Akitas as they are not as stubborn and are more friendly with other dogs. 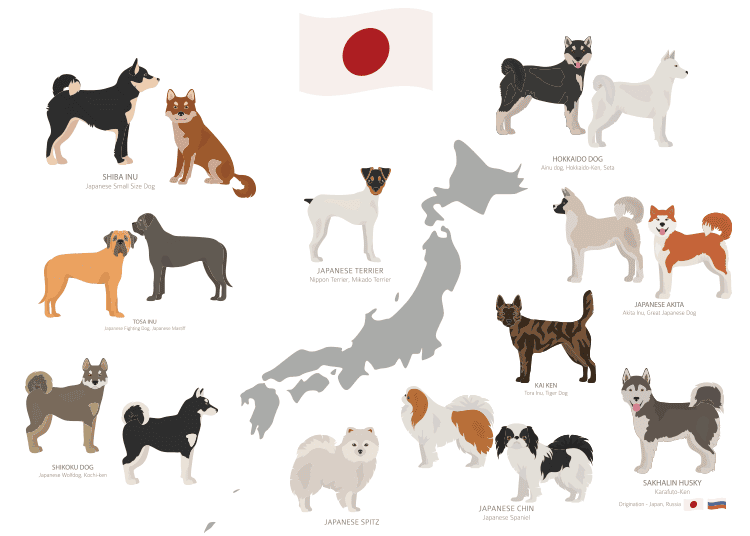 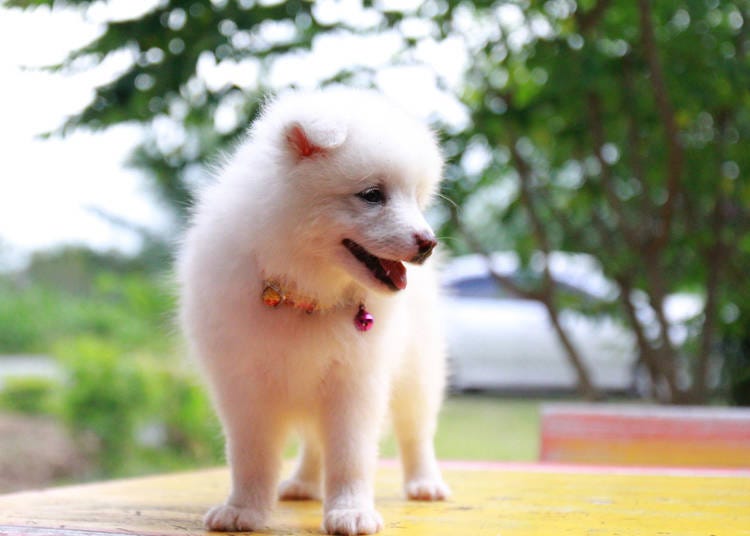 If you’re looking for a cute and cuddly companion dog, try the Japanese spitz. This small, fluffy Japanese breed makes the perfect companion dogs and was bred for city dwellers. They have close genetics to Siberian samoyeds, denoted by its thick, long coat of white fur.

Like other spitz breeds, it has a wedge-shaped snout and pointy ears. The Japanese spitz is energetic and obedient, but can bark a lot if not trained properly. This breed is very good with children and other pets.

The Japanese terrier, or Nihon terrier, are another small-sized Japanese dog. They are believed to have descended from smooth-haired fox terriers from the Netherlands, pointers, and indigenous Japanese breeds.

Japanese terriers typically have a black face with a white body. They have pointed ears that fold forward, and their tails are usually docked.

They make great companion dogs for quiet households. The Japanese terrier is rare, even in Japan. 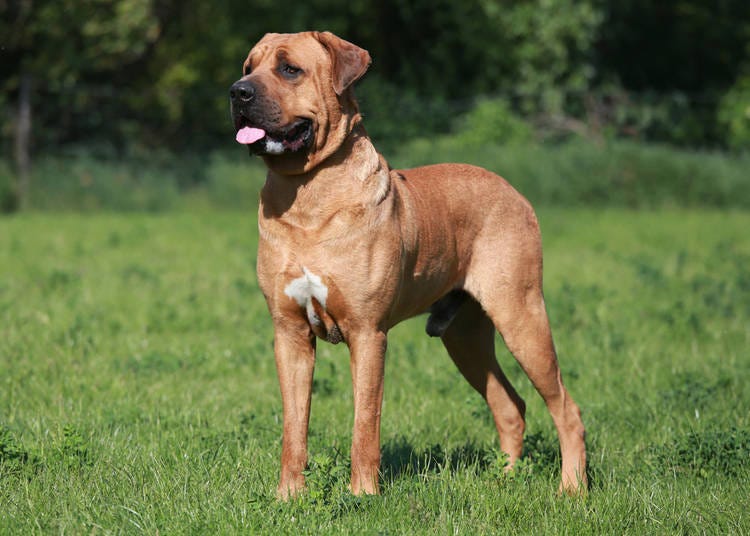 The Japanese mastiff has short, smooth hair that is red, fawn, or brindle in color. Tosa Inus are sensitive, loyal, and quiet. They make excellent guard dogs and are good with kids.

Getting a Japanese dog 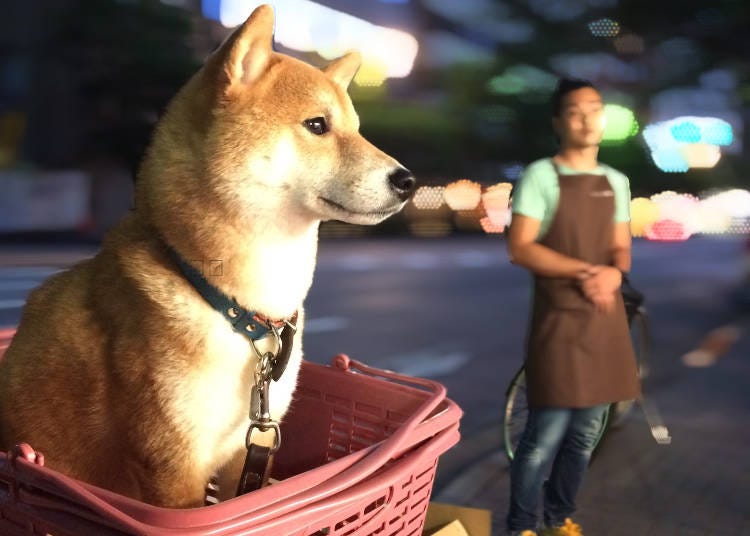 No matter what the Japanese dog breed you're thinking of getting, it's definitely harder to get one outside of Japan. For this reason, a fair number of people come to Japan with the hope of picking up a pet.

Exporting a Japanese dog from Japan comes with its own challenges. Not all breeders will want to export certain Japanese dog breeds, as they are considered 'national treasures' of a sort.

The next hurdle is cost. Prices of dogs in Japan vary, but in general, younger pups (2 months old) are cheaper than older pups.

Once you've picked out your Japanese pup, there will be additional costs with preparing to export. This will include vaccinations/microchip, dog crate, kenneling fees, export pedigree, Animal Quarantine Inspection, and other costs.

Actual shipping costs for shipping a dog from Japan will vary by country. Before buying a dog in Japan, be sure to check whether your airline ships pets! Also check the associated pet fees - it may very well be over $200.

You will have to know the import laws for your country. Many countries, in the EU for example, will require rabies vaccination and a 21-day quarantine period in Japan.

Generally, you may find it much less hassle to search for a Japanese dog breed exporter who can connect you with a breeder and take care of all the paperwork on your behalf. 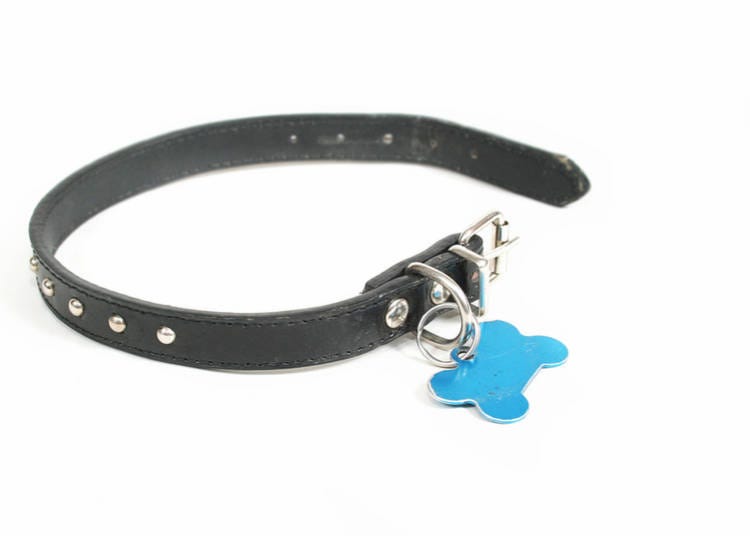 Now that you have selected your Japanese dog, naming him or can be exciting and difficult. In Japan, you can find dogs named anything from Ryuu to Lucky to Sausage. Take a look at some of these popular Japanese dog names. 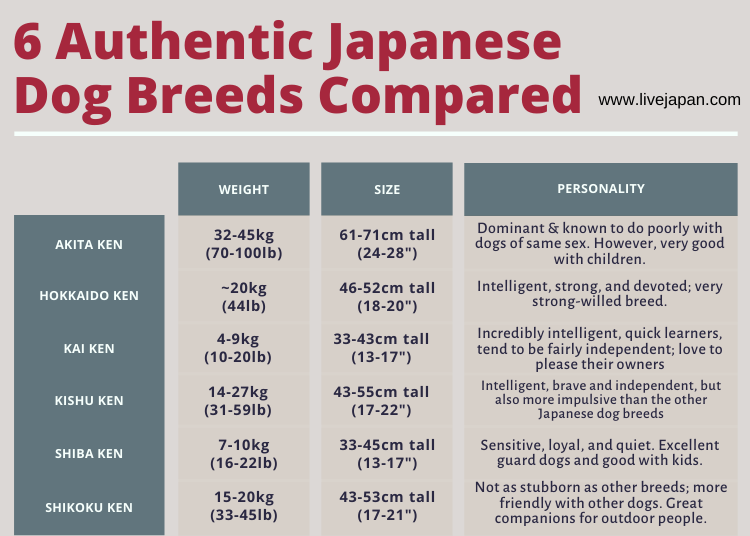 Japanese dog breeds are beautiful! These pets make for great companions. You can find Japanese breeds that are small, large, fluffy, or smooth! Next time you’re considering a new fur-baby, check out these Japanese breeds!

Meet Snoopy - A Look Inside Japan's Very First 'Peanuts Hotel'!
*This information is from the time of this article's publication.
*Prices and options mentioned are subject to change.
*Unless stated otherwise, all prices include tax.