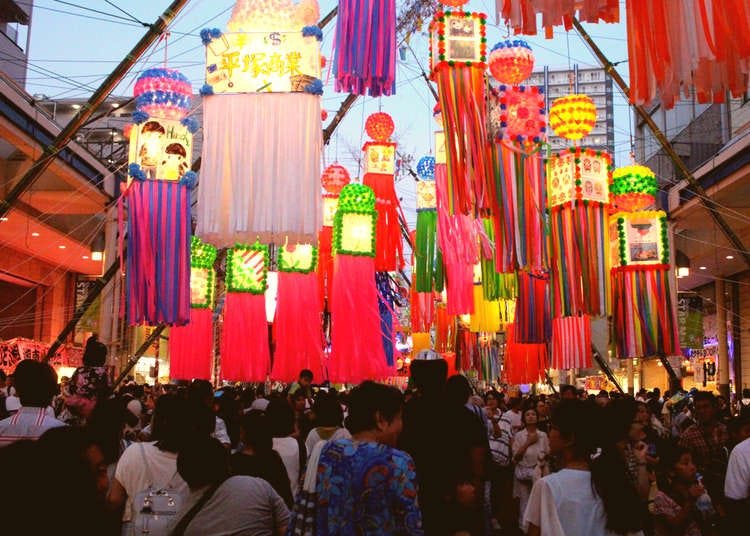 Summer in Japan means it’s festival season. From the lively Obon held to remember and celebrate one's ancestors to various fireworks illuminating the night sky, there’s no lack of opportunities to celebrate, the Japanese way. But there's one festival that is especially wonderful and magical: the Tanabata Festival.

The Star Festival, as Tanabata is also called, is celebrated in Japan since 755 and thus has a long and rich tradition within the Japanese calendar. It has its roots in China, in a celebration called Qixi Festival. The tradition was picked up by Empress Koken, the 46th monarch of Japan, who introduced the festival's lore and traditions to Japan. The people loved the idea behind the Star Festival and it was welcomed with open arms.

Orihime and Hikoboshi - The Story Behind Tanabata 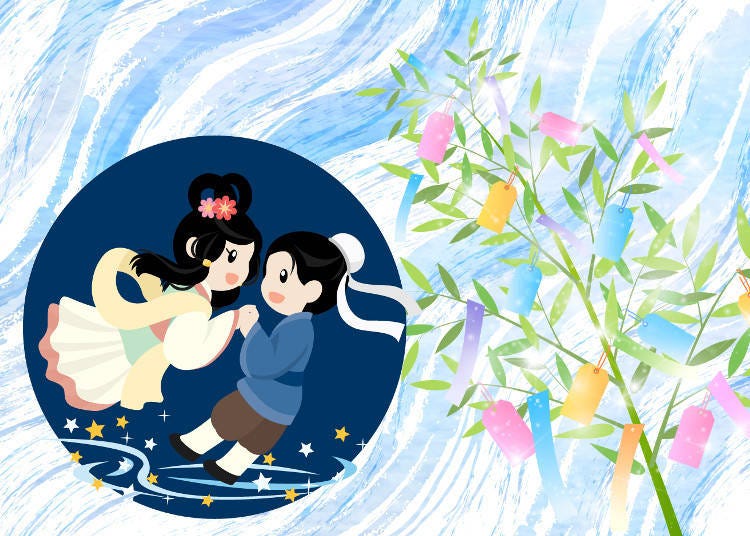 Throughout history, quite a few versions of what exactly lead to the Tanabata Festival have emerged.

Undoubtedly, the inspiration was the Chinese tale of "the weaver girl and the cowherd". Let’s look at the most popular version of said story.

Orihime, the Weaving Princess, was so skilled in weaving clothes along the bank of the Heavenly River Amanogawa, the garments she crafted were beautiful and fine like no other. Her father, the Sky King Tentei, loved wearing the clothes his daughter made.

Because of her father's fondness for her garments, Orihime worked hard to weave new and wonderful things day in, day out. While she enjoyed seeing her father happy, she also felt rather sad and lonely - focusing on her weaving, she'd never be able to meet someone and ultimately fall in love.

Her father noticed Orihime's sadness and arranged her to meet Hikoboshi, the Cow Herder that worked on the other side of the Heavenly River. The two of them fell in love the second as they laid their eyes upon each other. They didn't hesitate for long and became married shortly after. Living their life as a happy couple, Orihime neglected her weaving, and Hikoboshi let his cows roam free all over Heaven.

The Sky King was angered by the neglect of the couple's duties, separated them, and ultimately forbade them to meet. Orihime, on one side of the Heavenly River, was heartbroken, as her beloved was out of reach, on the other side of the river. She turned to her father in desperation, pleading him to let her meet her beloved Hikoboshi.

The Sky King couldn't help but notice Orihime's unhappiness and allowed her to see Hikoboshi on the 7th day of the 7th month. When the day of their meeting finally came, Orihime and Hikoboshi realized that there was no bridge across the Heavenly River - and by that, it would be impossible for them to meet.

Devastated, Orihime broke down and cried bitter tears. Her anguish was so great, a flock of magpies heard her crying and built a bridge with their wings, allowing Orihime to cross the river and see Hikoboshi. The birds also made a promise: they would come back on every 7th day of the 7th month to reunite the lovers.

Orihime represents the stellar formation of Vega, while Hikoboshi stands for Altair. You might have already guessed it, but the Heavenly River is none other than the Milky Way. The intersection of those two stars first gave birth to the lore that then created Tanabata Festival. The characters for Tanabata literally mean "Evening of the Seventh", a direct referral to the 7th day of the 7th month mentioned in the lore. 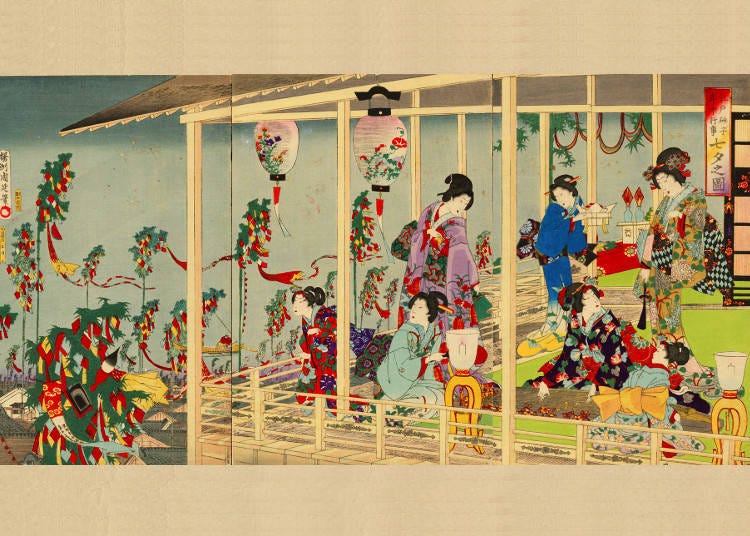 The annual reunion of the star-crossed lovers is celebrated in rather big fashion. The mortal population uses the happy event not only to praise the two stars but also send their very own wishes towards the heavens.

One of the most famous customs of Tanabata Festival is the writing of said wishes on small strips of paper called tanzaku, which are then pinned or hanged on bamboo decorations. The many wishes, along with their bamboo hosts, are then often set afloat on a river or burned after the festival.

This is a direct link to O-Bon, where instead of wishes, paper boats are set afloat. This link is not a coincidence, as the festivals of Tanabata and O-Bon used to be very close to each other, if not overlap, in the old Japanese lunisolar calendar. They became separate events as the Gregorian calendar was adapted and the dates for the festivals shifted. 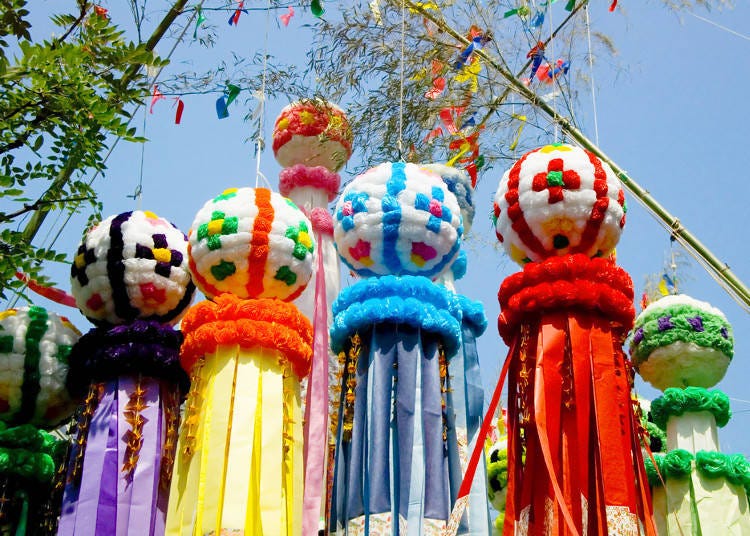 Apart from the bamboo decorations, paper plays a major role when it comes to decorating one's home or the streets of a city. Big, colorful streamers made from paper are installed wherever Tanabata is celebrated.

People also decorate their homes with smaller, handcrafted paper ornaments. These papers decorations are called nanatsu kazari and, as the name indicates, there exist seven different types, each with its own specific meaning.

・Kamigoromo: these kazari take the form of the traditional Japanese kimono and are hung up to commemorate Orihime's garments. They also represent the wish for a strong sewing arm.
・Fukinagashi: the streamers and main decoration. They symbolize Orihime's yarn and the wish for creativity and skill with the needle.
・Tanzaku: the paper on which the individual wishes are written. Hanging these up also represents the wish for improving one's penmanship skills.
・Kuzukago: the symbol of a waste bin to collect leftover silk and paper alike. They represent the wish for a sense of tidiness and thrift.
・Toami: a kazari that resembles seafood. Seafood is not only an important source of protein within Japanese cooking but also stands for the general wish for fortune and luck.
・Senbatsuru: paper cranes express the wish for longevity. The folding process is said to hone one's concentration skills as well.
・Kinchaku: symbolizing a purse, this kazari naturally expresses the wish for wealth. Not only in a financial sense, though: the purse also represents a "wealthiness of the mind" - being smart and wise.

There's also a song that is often sung during the celebrations, which goes as follows:

When is the Tanabata Festival Held? 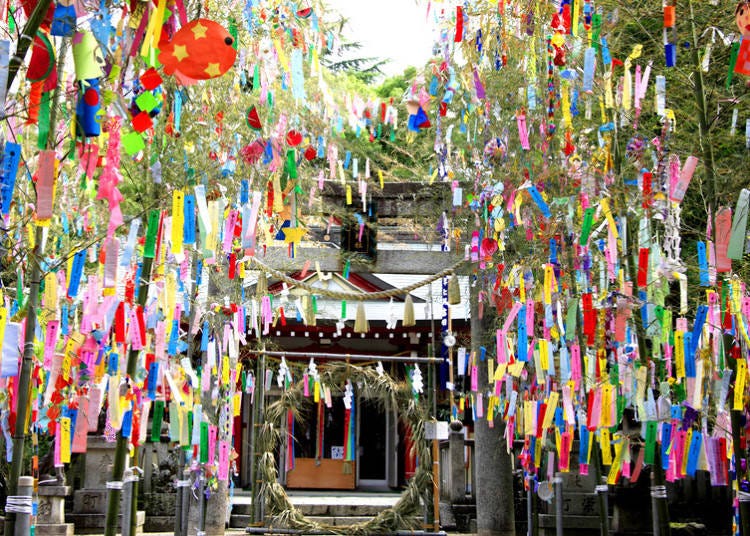 In most regions, Tanabata takes place during the first week of July, from the 1st to the 7th, the highlight naturally being the 7th night of the 7th month, when the two star-crossed lovers reunite.

However, just as every region in Japan has its own Tanabata traditions, the time-frame in which the celebrations are being held vary accordingly.

Where is the Tanabata Festival? 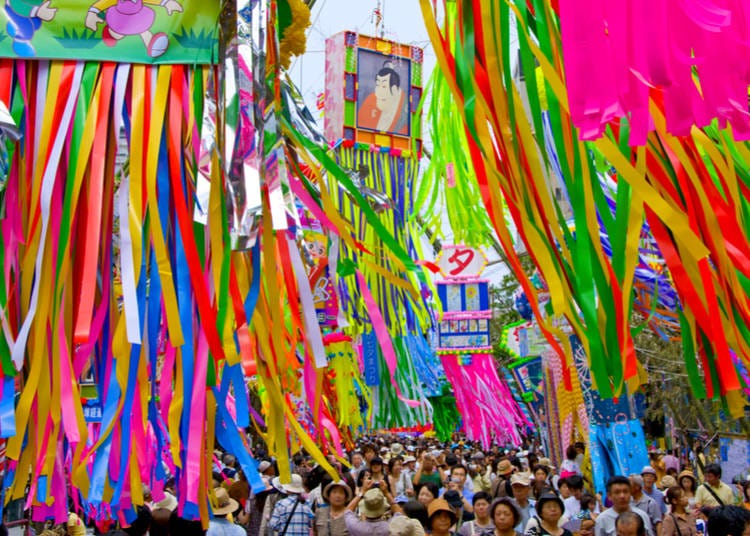 Hiratsuka
In the Kanto area, some of the biggest celebrations are held in Hiratsuka, a city about an hour south of Tokyo. The festivities are centered around the shopping street on the north side of the station. Main events will be held from the morning until 9 p.m. on Friday and Saturday and 8 p.m. on Sunday.

Tokyo
Numerous Tanabata celebrations take place throughout July all around the city. Noteworthy examples include:
・Asagaya Tanabata Festival, held at the Asagaya Pearl Center, a shopping street extending from the south exit of Asagaya Station
・Shitamachi Tanabata, held between Asakusa and Kappabashi
・Zojoji Tanabata, at the giant Zojoji Temple right next to Tokyo Tower

Sendai
One of Japan's most famous Tanabata Festivals is the one in Sendai. It's held from the 6th to the 8th of August every year - one full month later than most of the rest of Japan. Sendai uses the original date of the Japanese lunisolar calendar instead of the Gregorian date, so if you feel like experiencing this magical festival twice, Sendai certainly is the place to go.

Disney Tanabata Days! A Traditional Japanese Tanabata-themed Special Event '18
*This information is from the time of this article's publication.
*Prices and options mentioned are subject to change.
*Unless stated otherwise, all prices include tax.