HOME Understanding Traditional Japanese Kimonos (And How to Wear One!) 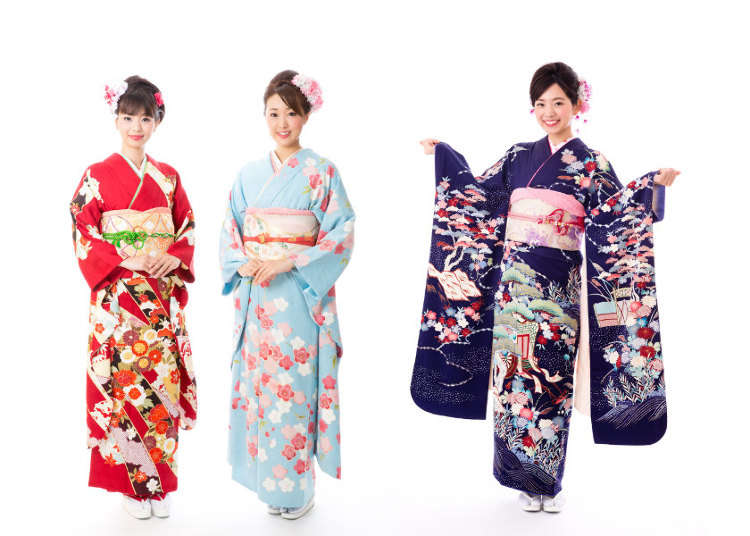 Understanding Traditional Japanese Kimonos (And How to Wear One!)

Just about everyone is familiar with Japanese kimono: the beautiful and most recognizable traditional garments in Japan. What you may not know, however, is that “kimono,” which literally means ‘thing that is worn,’ encompasses many styles, and can be worn for various occasions in Japan.

From casual, lightweight yukata worn during summer festivals, to expensive, high-quality furisode worn for formal occasions, kimono are woven into the fabric of Japanese life, even in modern times.

What is the history of Japanese kimono? 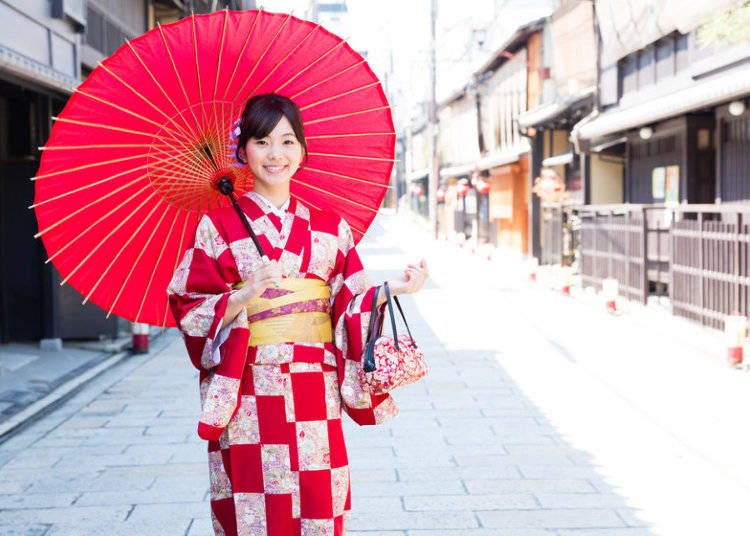 Though the kimono is a decidedly Japanese form of dress, it is said that its roots are from China. The earliest form of kimono was worn as a type of undergarment, gaining popularity in Japan during the Muromachi period (1392–1573), when they began to be worn without hakama (traditional Japanese trousers), and paired with a sash called an obi.

It wasn't until the Edo period (1603–1867) that the kimono, as we know it today, really came into its own, with an ever-expanding variety of colors, fabrics, and styles available. The obi became wider, and the length of the kimono sleeves grew as well. Kimono are typically only worn by women or girls; however, there are some exceptions. 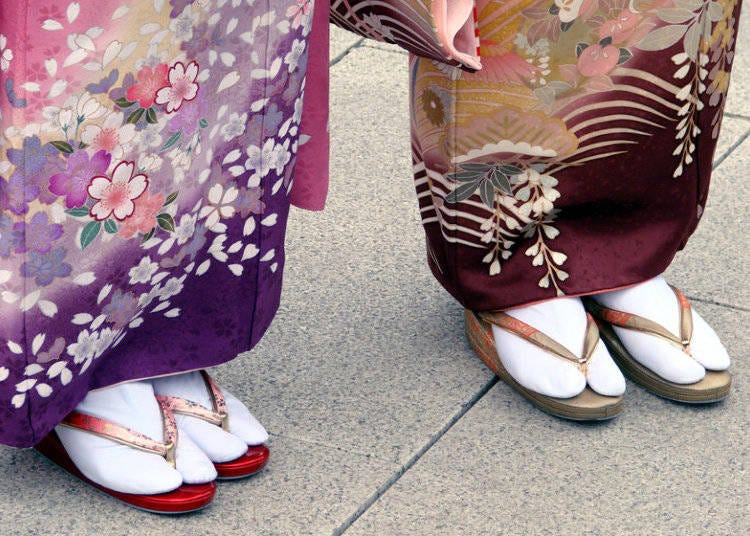 ・Kimono - This is the main garment, which can be made from a variety of materials including, cotton, linen, wool, and silk.

・Obi - The outermost sash that is tied around a kimono. The knot can be tied in a variety of decorative ways.

・Juban - A type of undergarment used specifically with kimono.

・Koshi-himo - A sash that is tied at the waist to secure the kimono in place.

・Datejime - A belt that is fastened over the kimono, but under the obi, which helps the obi keep its shape.

・Tabi - Socks explicitly made to be worn with traditional Japanese footwear. The toe area is split into two sections.

・Geta, Zori - These are some of the traditional types of footwear worn with kimono. They somewhat resemble modern sandals.

What kinds of Japanese Kimono are there and when are they worn? 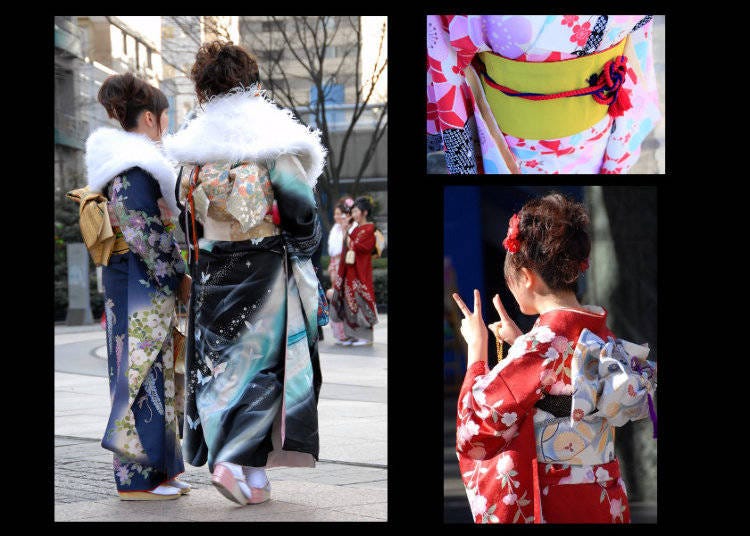 ・Furisode - This is the type of Japanese kimono worn by younger, unmarried women and girls. It is distinguishable by its long sleeves and often comes in bright colors. Furisode is the typical kimono worn during Japan’s Coming of Age Day (‘Seijin no Hi’).

・Tomesode - A formal kimono that’s worn by women who are married. It may be decorated in intricate crests and patterns; however these decorations are typically found below the waist. Mothers traditionally wear a black tomesode at their child’s wedding. There are also colored tomesode, which are sometimes worn by single women on occasion.

・Houmongi - Literally meaning “visiting kimono,” a houmongi is a type of kimono that’s suitable for any age and marital status. You can identify this kimono by the patterns that run over the shoulders, and across its bottom. This type of kimono may be worn to attend a wedding or tea ceremony. 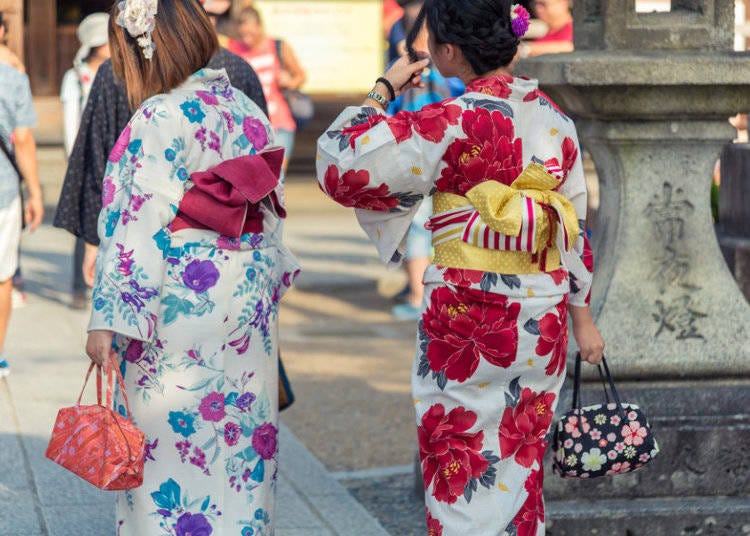 ・Yukata - These are the kimono most often seen at Japanese summer festivals. Yukata are made of thin material, and suitable for both women and men. However, men’s yukata are typically not as colorful, nor as flashy as the ones worn by women.

・Komon - Another type of casual Japanese kimono. A komon is usually decorated in a repeated pattern. The komon is perfect, casual daywear, as it was the common everyday garment in the days before Western clothing became the standard wear.

・Iromuji - A plain, solid color kimono without any patterns, worn by married and unmarried women alike. Iromuji may be in any color with the exception of white or black, however, they are in rather subdued tones. They may also be decorated with crests–the more crests there are, the more formal the kimono. This is a simple, but sophisticated kimono.

How to Wear a Kimono 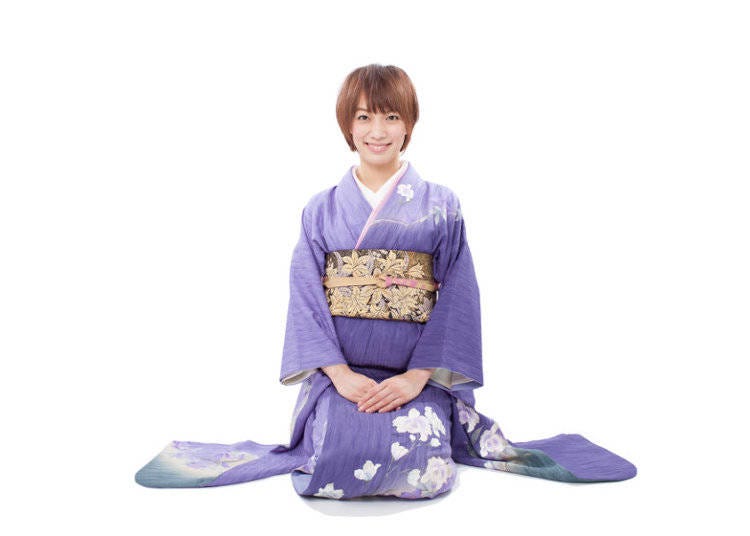 First, put on the juban, as well as tabi if you plan to wear them. Next, center the back seam of the Japanese kimono along your spine. Then wrap the right side of your kimono tightly over your body, towards the left. Bring the opposite side right, so that it overlaps the fabric. You should wrap it so that the bottom hem stops at the ankle. Kimono are designed to always have excess material, so it will be necessary to wrap accordingly. Tie the koshi-himo sash directly in front, below the excess fabric after crossing it around the back. Then, straighten said fabric over the koshi himo. Next, wrap the datejime sash around your waist and tie it in the front. (These days, datejime may also come with velcro attached for easy attachment.)

Wearing an Authentic Kimono in Tokyo’s Most Traditional Neighborhood! 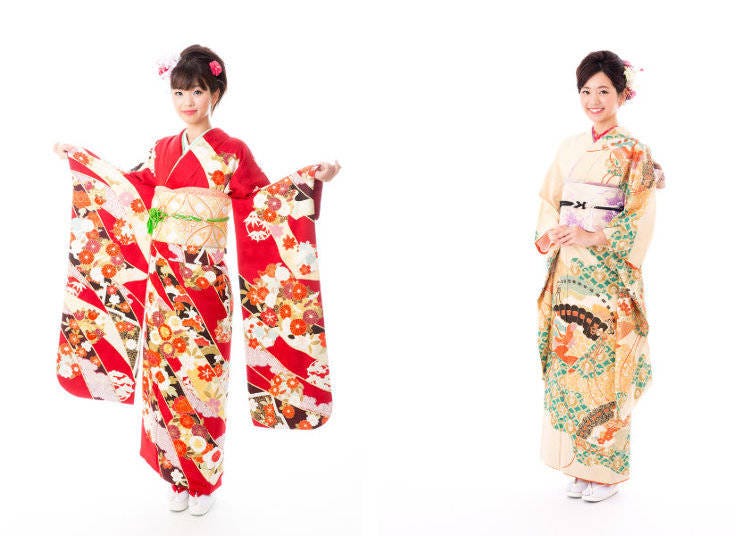 Once these steps have been completed, it is time to put on the obi. Wrap it around your abdomen, then fold it according to the type of knot you prefer, and then slide the knotted part all the way to the back. In the interest of convenience, obi with pre-made bows are also available for anyone wanting the look of an intricately tied knot without the hassle of having to perform a complicated tie on one’s own.

After the kimono has been properly put on, you may choose to further accessorize the obi with optional decorative items like an obi-age sash, or a decorative cord called obi-jime. Wearing geta, which range from casual to formal, depending on the kimono worn, is the final step. It is also worth noting that hair is traditionally worn up, away from the face when a kimono is being worn. 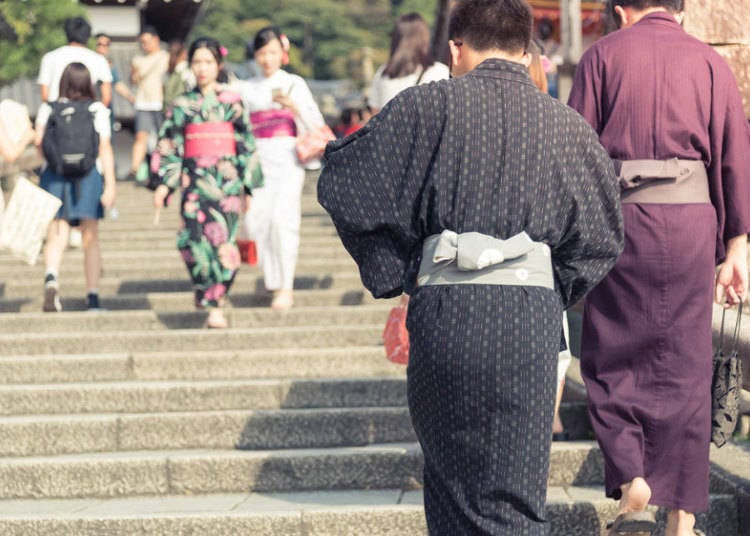 If the idea of putting on a Japanese kimono is daunting, you’re not alone; even Japanese people require help putting on certain types of kimono! Luckily, there are professionals at kimono rental shops who will dress customers, particularly the more formal kinds, in order to achieve the perfect look. The next time you are in Japan, try it for yourself!

Checking out Japan’s Traditional Footwear
All About Kimono: Designs, Patterns, Where (and How) To Buy!
Experience Japanese Tradition! 5 Popular Kimono Rental Shops around Tokyo
*This information is from the time of this article's publication.
*Prices and options mentioned are subject to change.
*Unless stated otherwise, all prices include tax.