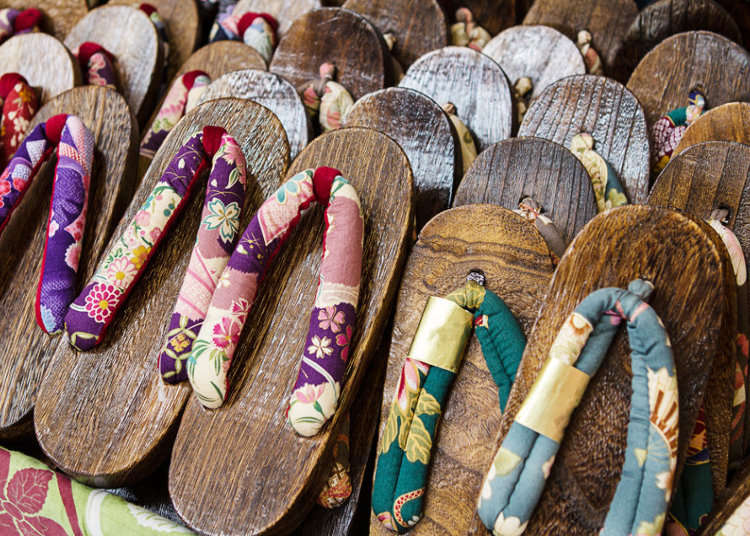 There's a lot to admire about traditional Japanese clothing: exquisite kimono, colorful yukata, boldly designed happi, and simple, but dignified hakama are all celebrated garments originating from Japan. However there is one area of classic Japanese fashion that sometimes goes overlooked: traditional footwear! 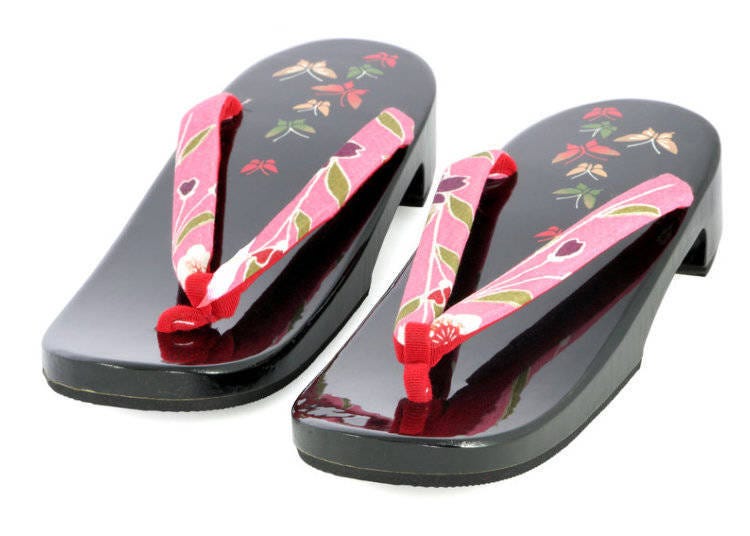 Where would any of us be if not for the shoes on our feet? Aside from serving a functional purpose, however, these traditional sandals and shoes can also be appreciated for unique aesthetic qualities that are considerably different from shoes outside Japan. Let's examine some traditional Japanese footwear! 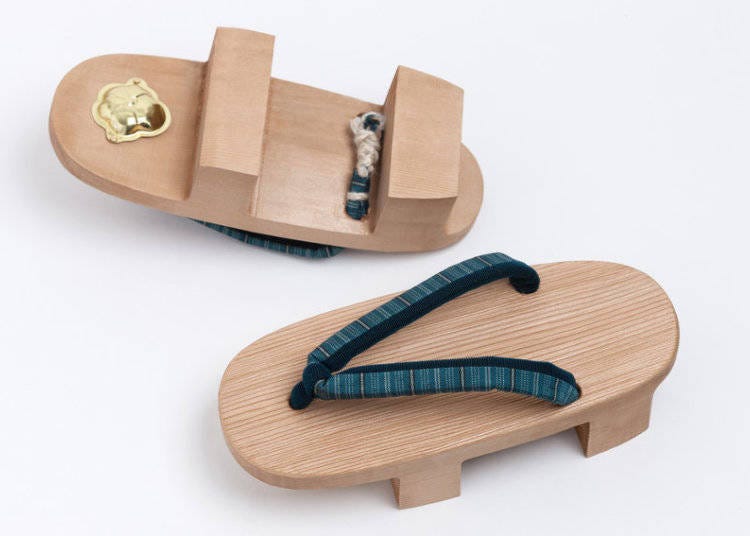 Geta are one of the most common traditional footwear you can find in Japan, easily spotted after hearing their distinctive ’karan-koron’ clacking sound.

Geta can be described as a kind of wooden sandal. A strong but soft fabric strap called ‘hanao’ is attached, securing them snugly to one's feet. Typical geta consist of a flat board-like piece called a ‘dai’ and two support pieces called the ‘ha’ (meaning ‘teeth’). Geta are most often worn with yukata, although you can occasionally see them paired with casual clothes such as jeans or shorts during the summertime. 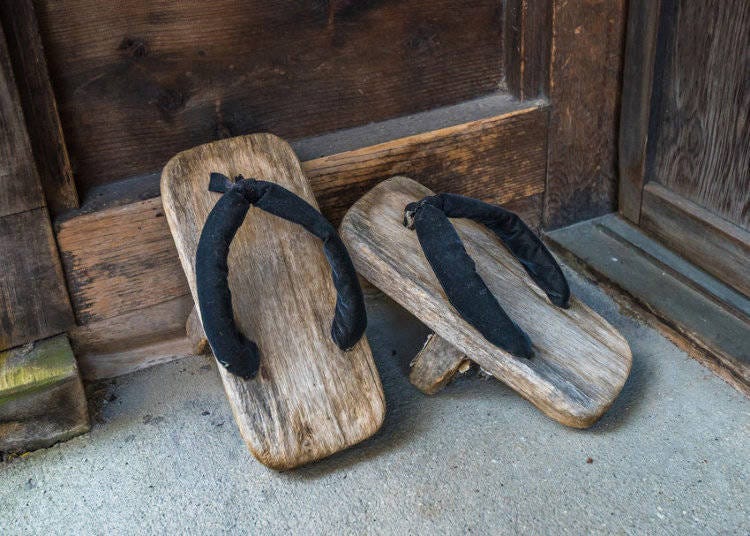 Although most geta consist of two dai, if you are lucky you can sometimes see dedicated geta-wearers walking in ‘ipponba,’ which are geta perched on a single tooth! More recently, designers have experimented with non traditional geta, featuring modern patterns and interesting accessories attached. There has even been a recent line that has animal footprints on the bottom instead of the traditional ‘ha’! 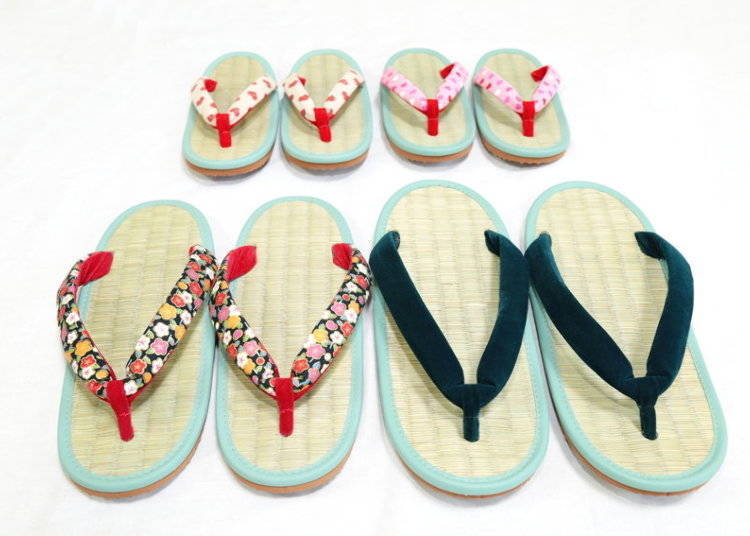 Zori are another type of Japanese sandal. The most common traditional zori are made from straw known as ‘tatami,’ however, cloth, lacquered wood, and leather can also be used. In recent years they have been made with synthetic materials as well. As there are several variations, zori can be worn with a range of clothing, from the casual loose-fitting jinbei to formal kimono. 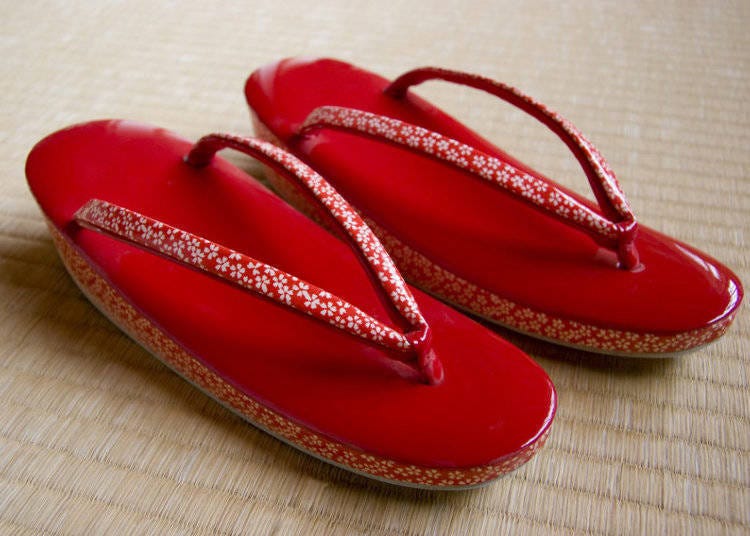 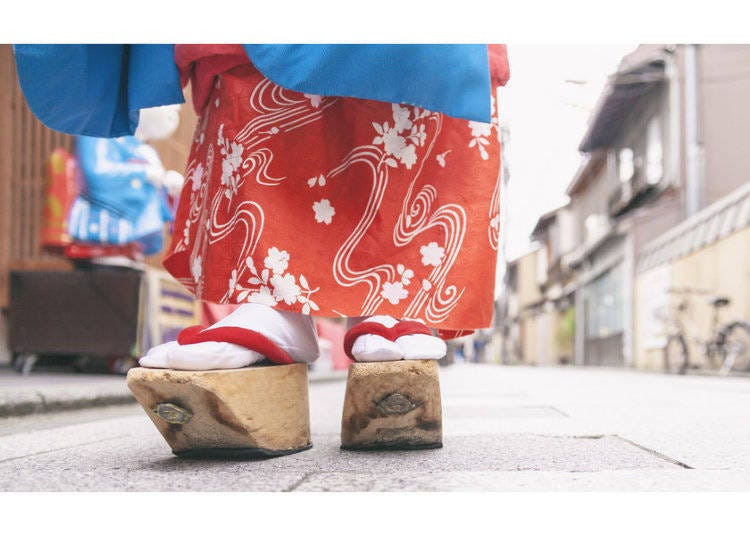 Okobo are a type of tall, willow-wood geta traditionally worn by maiko. The okobo worn by maiko are typically non-lacquered, except during the summer when they may switch to a black lacquered style. The colors of the straps signify the rank of maiko: red is worn by novices, while yellow is reserved for more experienced maiko. 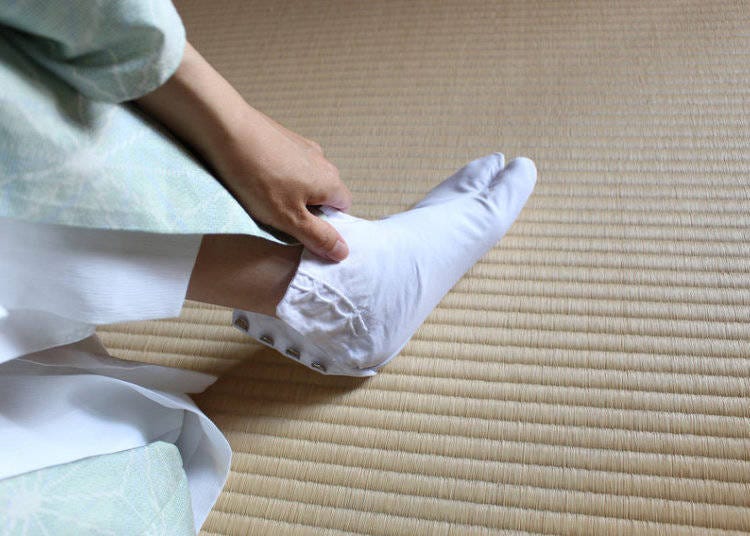 These two types of footwear go hand-in-hand (or rather, toe in toe).

Tabi are the traditional white socks worn with formal clothing, such as kimono. Unlike other socks, tabi are distinguished by the separation between the big toe and the others, allowing for use with geta or okobo. 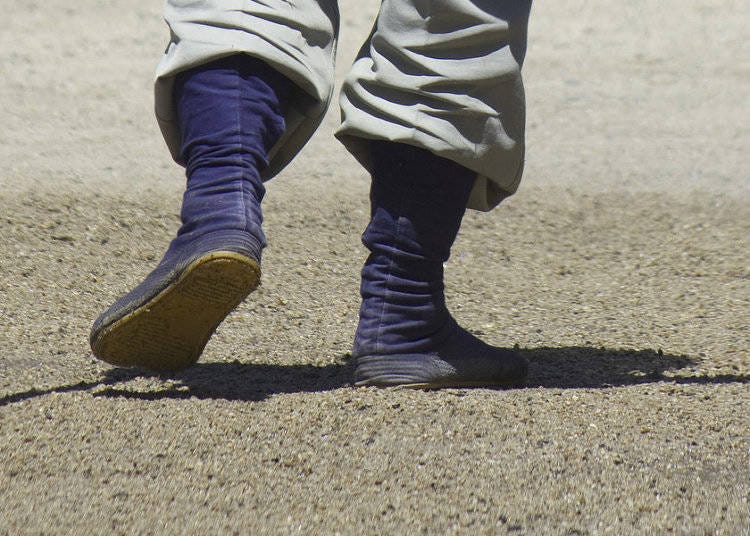 Jika-tabi, while retaining the same shape as tabi, function as a kind of shoe or boot. (The actual word means 'tabi that touch the ground'.) Jika-tabi, invented in the 20th century, are made of rugged materials such as rubber. The shoes are often worn by farmers, construction workers, rickshaw-pullers, or gardeners. 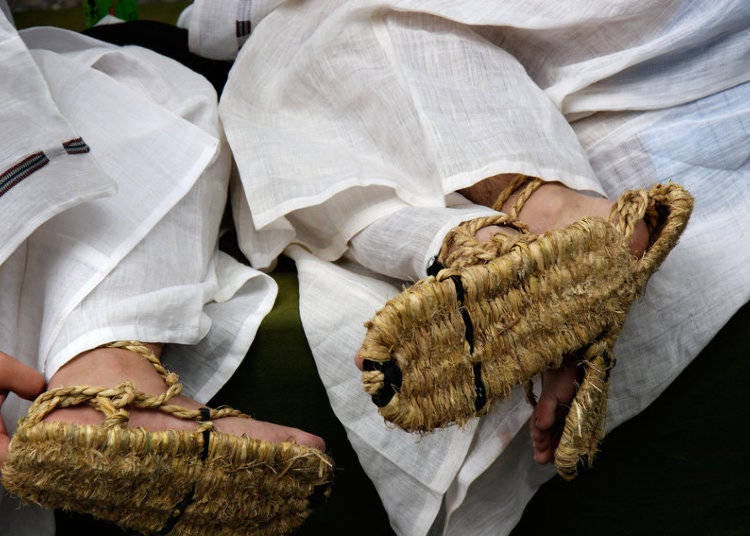 Waraji are arguably the simplest footwear on our list. These straw-rope sandals were the basic everyday footwear of old Japan. In the feudal era, samurai, as well as soldiers called ‘ashigaru,’ were known to have worn this type of shoe. In modern times, waraji are still worn by Buddhist monks.

Rice straw is the traditional waraji material, although the sandals can also be constructed from hemp, cotton, or palm. Waraji meant are to be worn with toes slightly overhanging the front.
Which of these traditional Japanese footwear is your favorite?