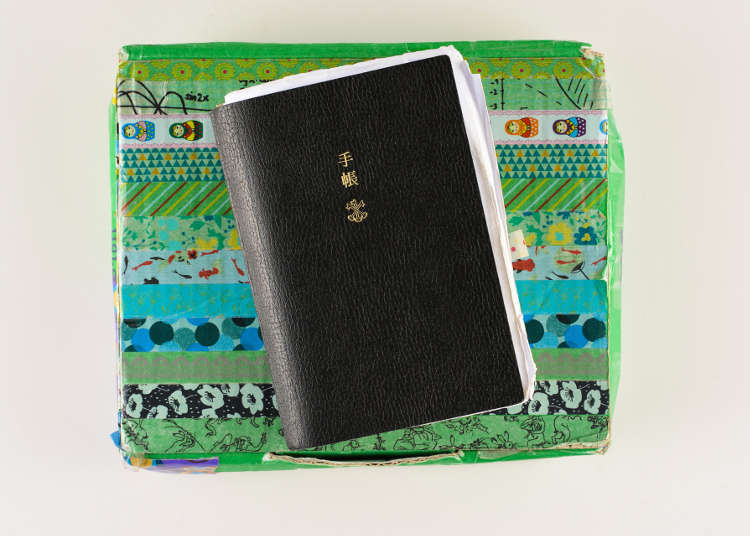 Why schedule your days the ordinary way when you could do it in style? Hobonichi Techo is the Japanese daily planner for people looking to add a little uniqueness to their daily routine. The brand has even won acclaim worldwide, with over 600,000 users outside Japan. Every September, Hobonichi Techo releases their new lineup for the upcoming year. LIVE JAPAN visited their TOBICHI 2 studio in Aoyama to get a special preview of the new designs, as well as take a closer look at some of the brand’s classic planners and talk about the “Traveling Hobonichi” project. 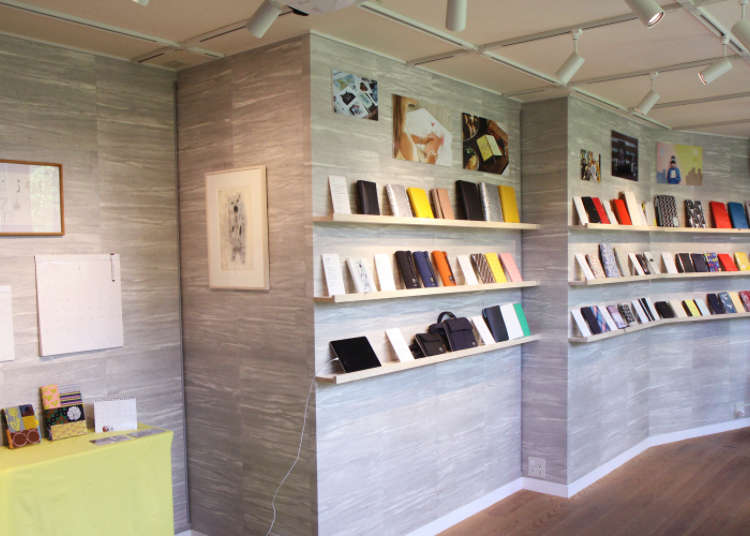 The idea for the Hobonichi Techo came about when well-known copywriter Itoi Shigesato, creator of the Hobo Nikkan Itoi Shinbun website (called “Hobonichi” for short) sought to create the kind of tetchō (daily planner) that he himself would use. Not content with the status quo of available daily planners, the team custom designed a planner that is as stylish as it is functional. The true beauty of the Hobonichi Techo is how customizable it is. The product, which features the motto is “This is my LIFE,” encourages people to use the planner however they wish. Some users have been known to fill it with notes, sketches, photos, or candy wrappers, while others use it simply as a way to keep track of meetings and appointments. There are a number of people who opt to use it as a diary, writing their thoughts daily on each page. In addition to being multi-functional, they are also available in a multitude of styles which appeal to people with varying tastes and lifestyles. At the current time, there are 79 covers from which to choose! Since the brand’s inception, there have been a number of collaborations with notable Japanese and international designers.

What Makes Up a Hobonichi Techo 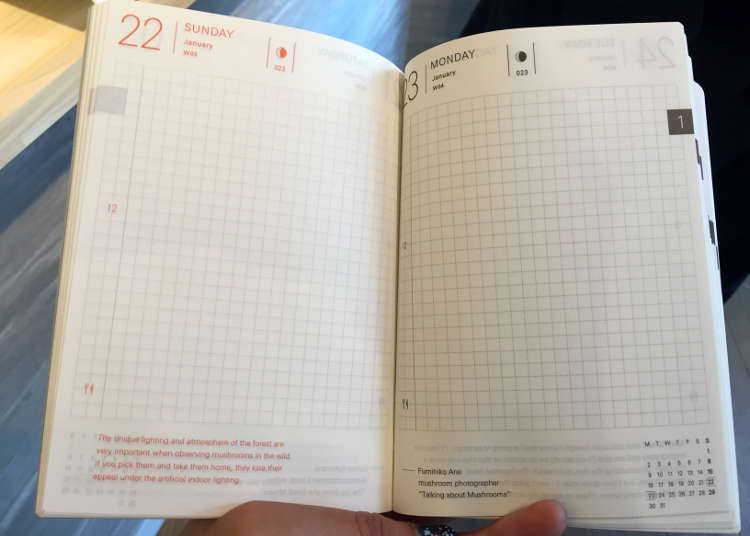 The ‘Original’ Hobonichi Techo is based on a one-page-per-day format. The A6 sized pages (the standard size of Japanese books) are made from Tomoe River paper, known for being both lightweight and strong. In fact, it is designed to prevent bleed-through. Special stitch binding allow each planner to lay completely flat at a 180-degree angle when open. The two loops attached to the cover serve a dual purpose, acting as a clasp as well as a pen-holder.

One feature that many users particularly enjoy are the daily quotes found at the bottom of the page, featuring interesting excerpts selected from artists, scientists, designers, and more. The quotes are meant to be lifestyle hints to help Hobonichi users each day. The ‘Hobonichi Techo Planner,’ the English version of the Original that was introduced in 2013, has the English version of these quotes. In addition to the Original and the Planner, there is also a double-sized version called ‘Cousin’ and a week-per-page version called ‘Weeks.’ 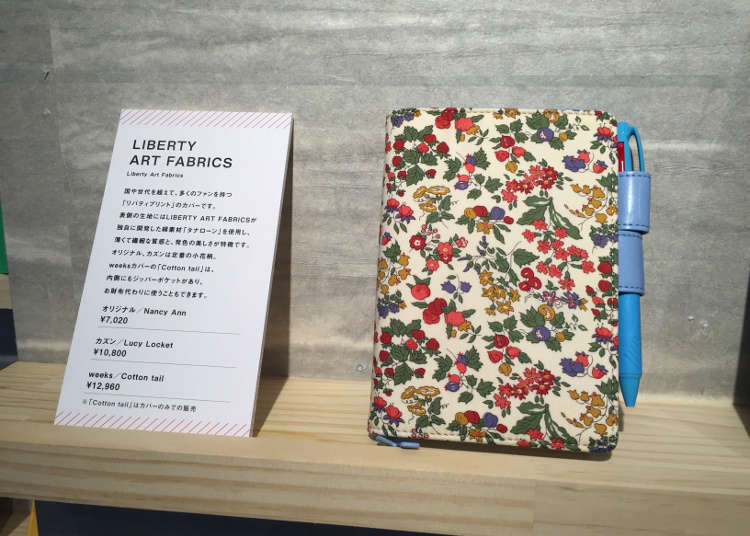 The new lineup will be available from the beginning of September. This 2017 edition features 79 different covers in a variety of styles. You’ll find planners that are chic, classic, artistic, cute, and even some inspired by Japanese pop culture. A wide range of materials are used, from the soft textiles of Liberty Art Fabrics and TRICOTÉ, to the fine Italian leather of Henry Cuir. As such, the prices also vary quite a bit, so you can choose the best planner to suit your budget and personal style. Let’s take a look at a few of the stand-outs from the upcoming collection. 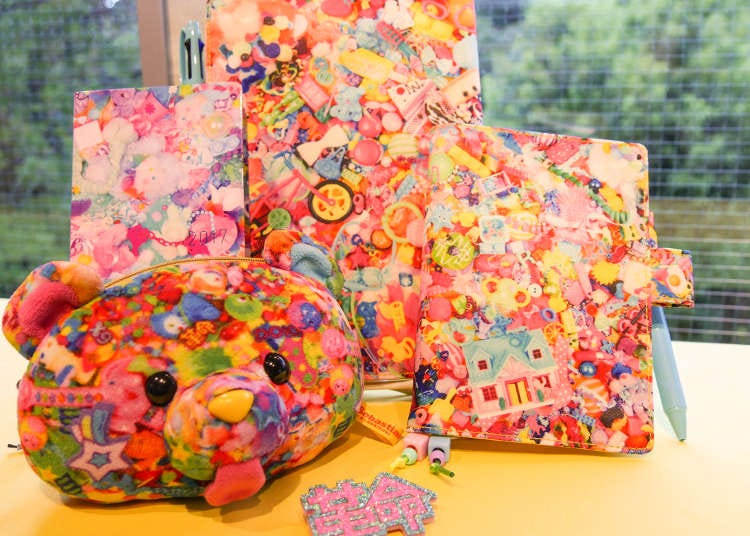 From the left: "Day Dream," and the two "THANK YOU ALL" planners by Masuda Sebastian

Masuda Sebastian, art director and founder of Harajuku’s legendary fashion shop 6%DOKIDOKI, is known for his trademark kawaii (cute) aesthetic. Masuda’s “THANK YOU ALL” covers for the Original and Cousin, and “Day Dream” cover for the Weeks planner feature a bright, candy-colored collage design and a sunny yellow interior. The bookmarks are neon yellow and neon green. With donuts, dollhouses, bicycles, and more, this quirky cover is sure to keep those who use it fascinated throughout the year. This is the planner that Harajuku fashion fanatics will not want to live without! 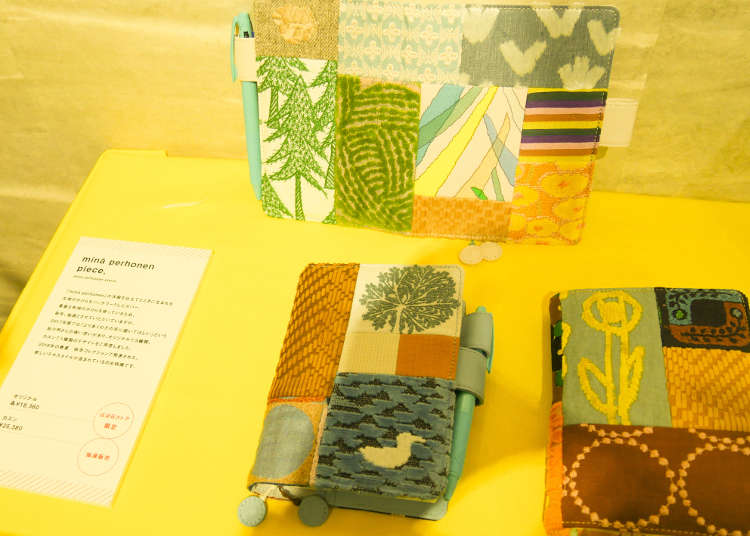 The "piece" collection by minä perhonen

Japanese fashion designer Minagawa Akira created the minä perhonen fashion brand 1995. This year, the brand has designed eight different covers for Hobonichi Techo. The “tambourine” features a herringbone patterned wool and subtle mauve pink interior. An especially charming collection is “piece,” which uses actual minä perhonen clothing leftover pieces of textiles to create patchwork designs in a choice of blue, yellow, and pink hues. These planner covers would make a lovely addition to anyone’s purse or work bag. Due to popular demand, preorders of "piece" have already sold out, including a special lottery. 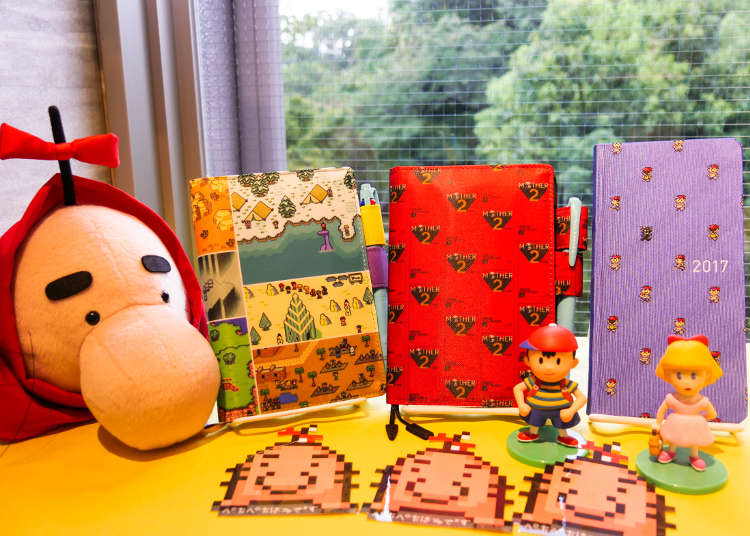 Although more than 20 years have passed since the release of the classic Nintendo game MOTHER2 in 1994, the game (known to audiences outside of Japan as EarthBound) has achieved legendary status among hardcore and casual gamers alike. Fans looking to carry a piece of gaming nostalgia with them daily have the chance to do so with three original MOTHER2 Hobonichi Techo covers. The collection is already proving to be one of the most popular in the 2017 lineup. “MEMORIES” features a collection of screenshots from the actual game, so true fans can relive their playtime day in and day out! 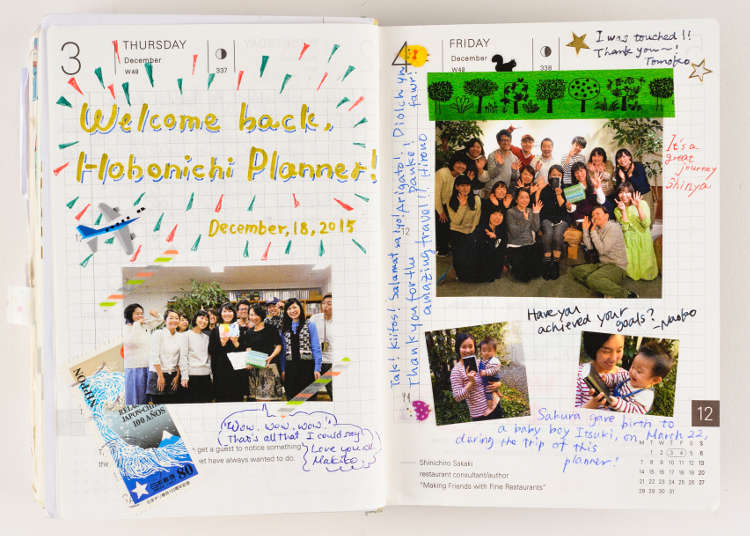 In 2015, one special Hobonichi Techo took a trip across the world. This became known as “The Traveling Hobonichi.” The project started when a Facebook-based Hobonichi fan group contacted the company with the idea of sending a single Hobonichi planner to various parts of the world, during which, the people safeguarding it would use it as they saw fit. During a period of January to December, the book passed through the hands of 36 participants in 14 countries across the Americas, Europe, and Asia, before returning back to its home in Tokyo. The planner grew thicker throughout the year, as it filled up with stickers and decorations, in addition to plenty of notes and illustrations.

Lindsay Moore, an American staff member working as a translator at Hobonichi Techo, was one participant of the Traveling Hobonichi project. She had the following thoughts on this unique book:

“It felt wonderful holding in my hands the very book that had traveled the world and been filled with the lives and feelings of other people. There's something inherently bonding when you meet a fellow Hobonichi fan for the first time, but it's never been as palpable as this little well-loved black book.” 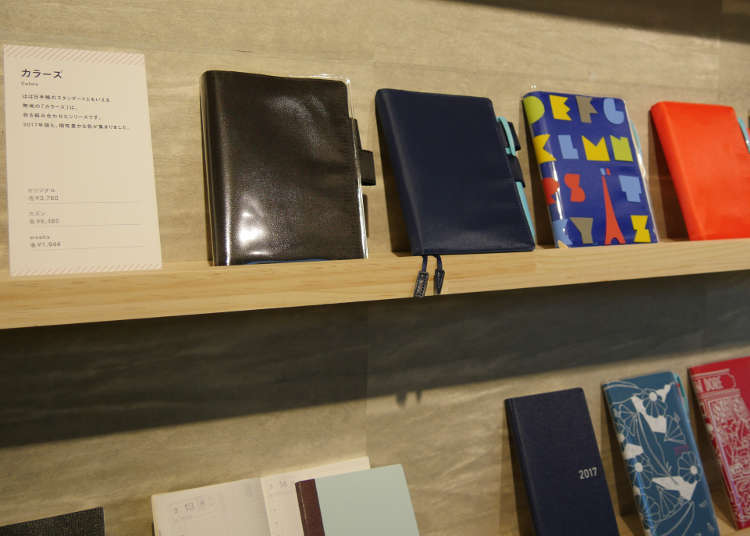 You can buy a Hobonichi Techo at the official shop in Tokyo’s Omotesando district, or by visiting any Loft. If you cannot make the trip to Japan, you can purchase both Japanese and English versions via the official website.
HOBONICHI TOBICHI
Hours: 11:00 a.m.-7:00 p.m.
Holidays: Tuesdays and Wednesdays