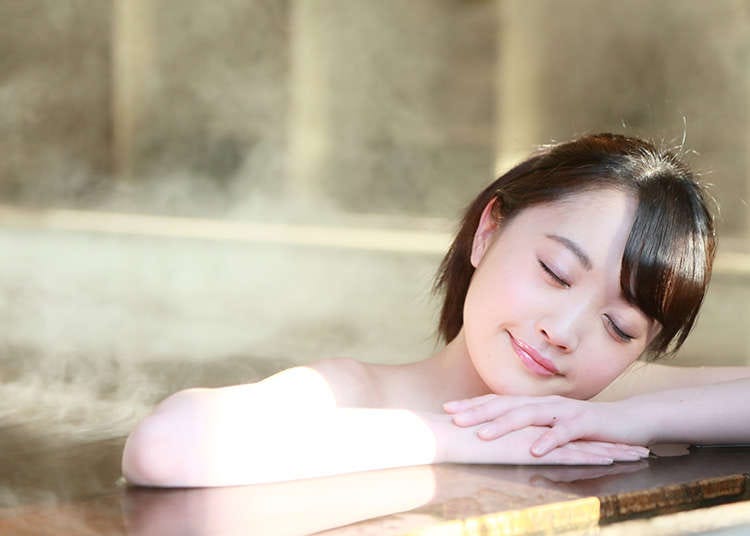 Japan is a nation that loves to bathe. For Japanese people, there’s hardly a greater bliss than to slowly soak their bodies in hot water. While technology changes with the times, traditional Japanese bath culture is still very much alive in the present day.

When not at their own bathtub at home, people go to large public baths or Japanese bathhouses – and, as opposed to the Western world, these places are frequented without any clothes.

People bathe together completely naked. Traditional Japanese bath culture is rooted deeply in the nation’s history and has its very own set of rules and norms.

What is the Difference Between Sento and Onsen? 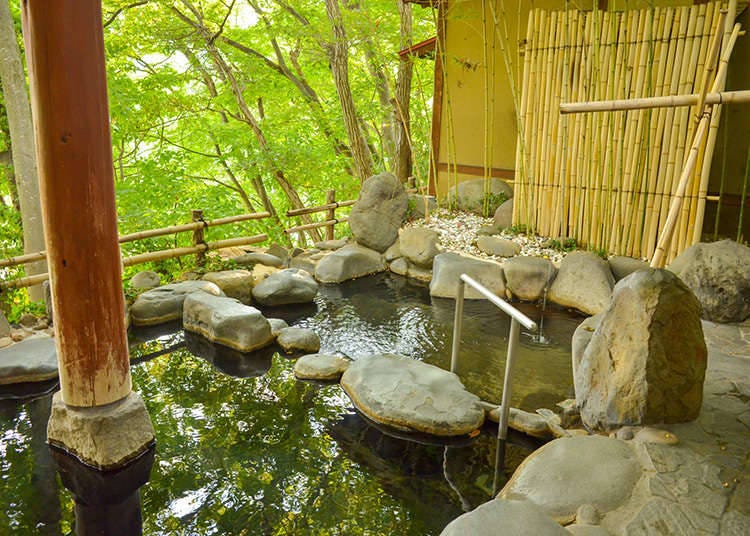 Sento refers to a traditional Japanese public bathhouse, while onsen describes a bath that uses water from an actual hot spring with a temperature higher than 25 degrees Celsius. Furthermore, onsen water must have at least one out of 19 different types of components, such as lithium or hydrogen ions.

Both in onsen and sento, a variety of different baths can usually be enjoyed. Traditional Japanese inns often feature “inner baths” inside the room itself. In contrast, public baths with spacious tubs are particularly popular, along with open-air baths (called rotenburo) in various shapes and sizes.

Soaking your body in refreshing hot spring water while overlooking a gorgeous natural scenery is an exceptionally relaxing experience. And it is an essential element of traditional Japanese bath culture. 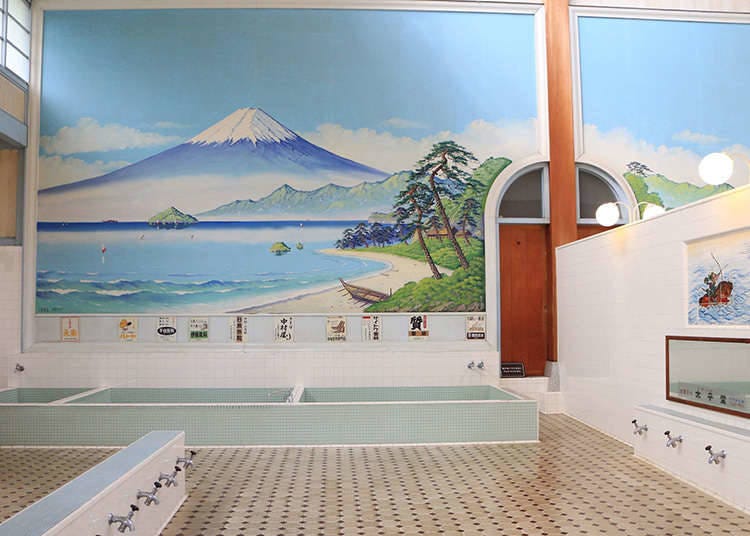 Sento are places that are frequented by all kinds of locals and thus offer a unique glimpse into the local people’s culture and day to day life.

A chat with the older man right next to you in the water, or some relaxation in the dressing room – little moments like these can turn out to be exciting experiences.

In the past, Japanese bathhouses featured a bath-attendant called the banto, who was on watch duty for both the female as well as the male side of the dressing area.

Nowadays, almost every public bath has abandoned this practice. Instead, a fee is simply paid upon entering the building, either via a reception or sometimes via a ticket obtained from a vending machine. 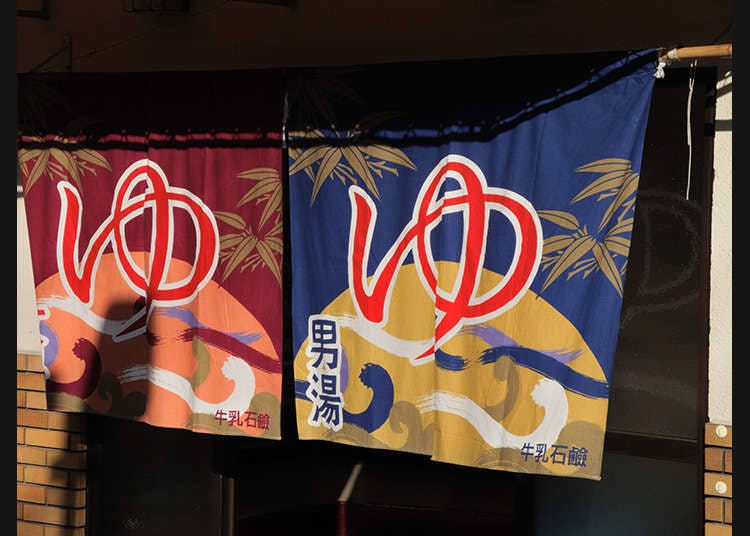 Of course, public bathhouses come in all kinds of variations – among them are so-called “Super Sento” and “Health Land” facilities, which are often tied to hotels or restaurants and offer a whole variety of spa services.

It’s not uncommon to find massage parlors, beauty salons, spacious resting areas, and even manga and computers inside a super sento or health land. Naturally, the entrance fee is much higher than for a regular public bath.

All across Japan, a variety of so-called day spas exist, free to use for an appropriate entrance fee without having to stay overnight, even when the bath belongs to a hotel or inn. In such cases, the entrance fee is simply paid at the reception.

Before Entering a Public Bath 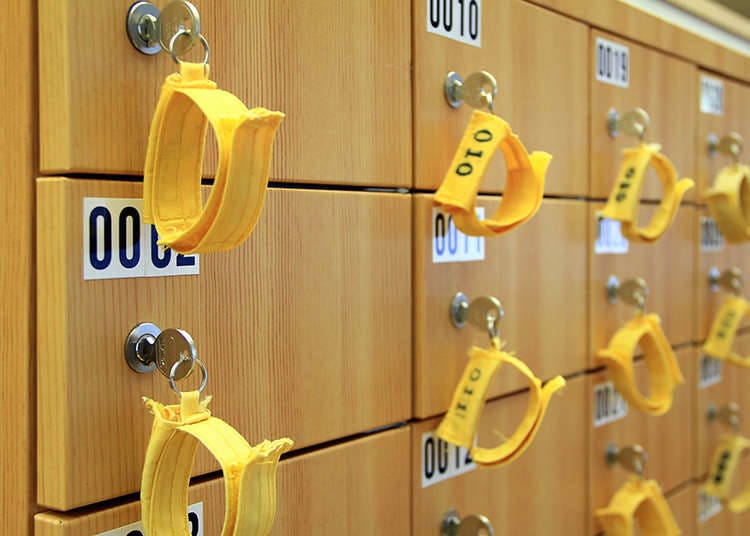 Every public bath has a dressing room equipped with lockers to store people’s clothes and belongings as well as baskets for towels and shampoo.

Neither swimwear nor underwear is allowed inside the actual water, and the big bathing towel that is used to cover up before entering can be kept inside this basket as well.

It is alright to bring along a small towel for wiping off sweat, or to put on one’s face – however, don’t put it in the water. Once inside, there’s nothing left to do but to relax and soak your body. 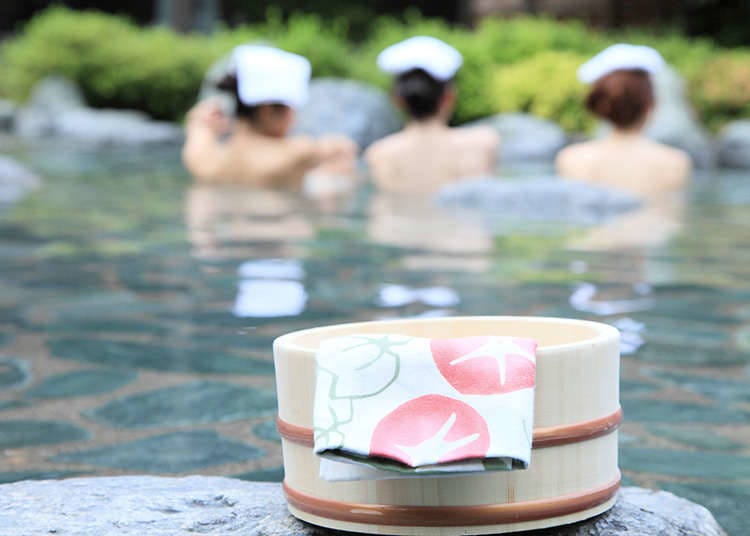 Kakeyu refers to the practice of cleaning one’s body thoroughly with hot water before even entering the water in the hot spring or public bath.

This isn’t only done to get rid of the sweat and dirt on one’s skin but also to accustom one’s body to the warm temperatures of the Japanese bath. Make sure to remove any make-up that you’re wearing as well.

As already mentioned earlier, towels shouldn’t come in contact with the bathing water either. Just wear it on your head or put it down next to the bath. Since hot springs and public baths are places of relaxation, it goes without saying that things like jumping in, diving, or swimming are prohibited – as is splashing around, obviously. The water is really hot and might hurt someone. 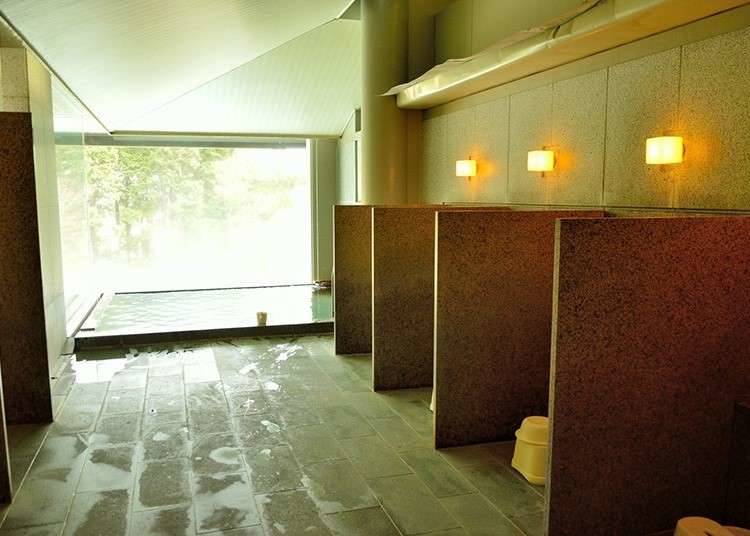 It might be surprising to some to see small white stools placed in the shower area. It is common for people to sit down while showering before entering the public bath or hot spring, so the chairs are free to use.

The most important part here is an obvious one: keeping everything clean and tidy. Simply make sure that there’s no shampoo or other residues left before you put the chair back at its original place.

Speaking of shampoo: it is common to bring one’s own shampoo to the public bath, so anything that is inside the provided baskets is likely to belong to someone. Certain places do offer free-to-use shampoo and soap, usually in large bottles fixed to the wall or something similar.

If you’re unsure, just ask the staff or people next to you. It’s always a good idea to bring your own products. 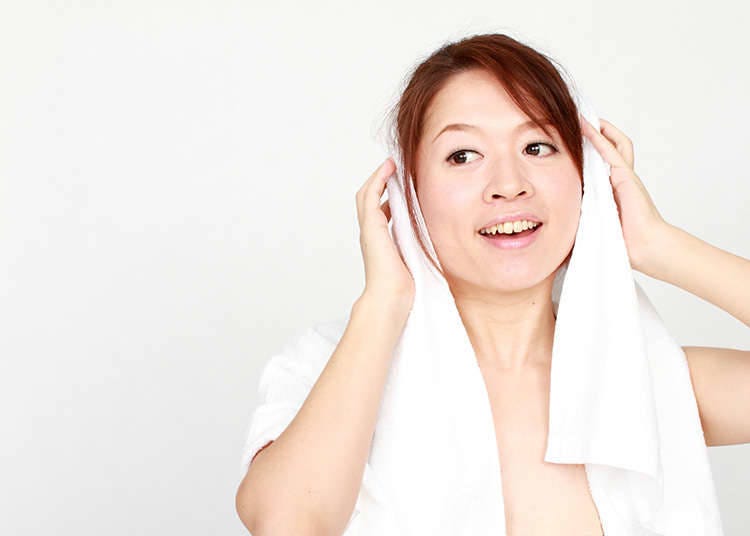 In Japan, wetness is considered to be unpleasant – this is why you’ll often see wet shoes, umbrellas, or even washing machines outside of people’s front doors. As such, returning to the dressing room while completely wet is considered rude.

No one expects you to be completely dry either, however, so just make an effort of getting nice and dry and wrap the bath towel around you before returning to your locker. Usually, the dressing rooms are also equipped with hairdryers, free for everyone to use. 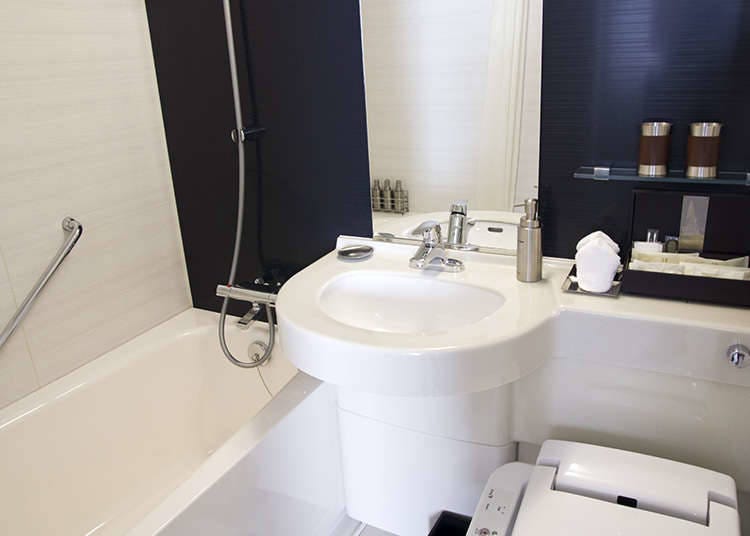 The bathrooms of regular hotels, such as business hotels, are generally equipped like a standard bathroom, featuring a bathtub, a shower, a sink, and a toilet – nothing much irregular here.

Certain hotels do even feature a public bath for everyone to use, generally divided into a men’s and women’s section. They work much the same way as regular public baths work, with lockers and dressing rooms. Additionally, however, they allow your valuables to be stored safely at the reception.

Rooms in bed-and-breakfast style lodgings and hostels may not have a bathroom inside the rooms and instead offer a public shower room for the guests to use. In these cases, the same rules for public baths apply to public bathrooms.

Japanese Hot Springs and Tattoos: Yes or No? 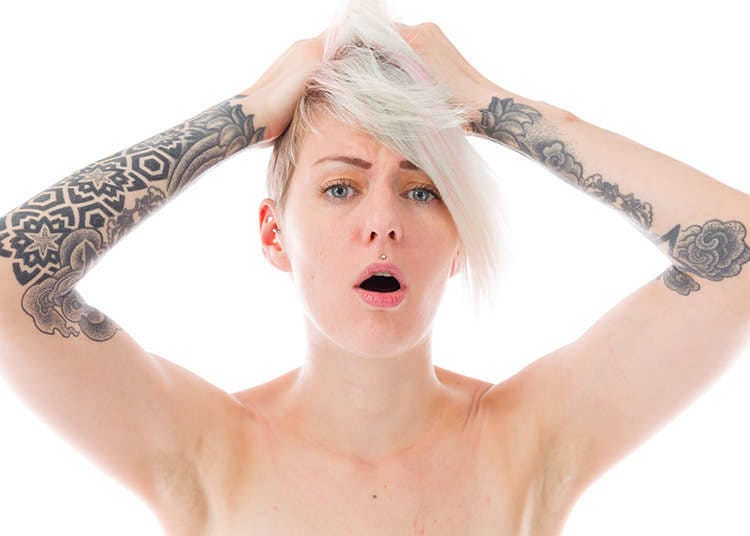 Japan is notorious for its strict policy on tattoos and hot springs and public baths. It is crucial to check beforehand whether the place in question allows people with tattoos or not unless you want to risk being asked to leave mid-bathing. A simple “tattoo ok?” will usually do to get a clear answer.

A tip for those with ink: booking a night in a traditional Japanese hot spring inn (ryokan is an alternative to visiting a public one. It might be a bit more expensive, but this kind of private onsen is a safe and convenient way to enjoy Japan’s unique bathing culture without having to worry about tattoo policies.

Live Japan's Top 3 Picks for Tattoo-Friendly Public Baths in Tokyo
'Thoroughly Unbelievable...!' 4 Weird Things About Japanese Bath Culture That Shocked Foreign Visitors!
Japan's Bath Culture: Tips You Should Know!
Hot Springs "Onsen" & Bath Houses Facility List
Onsen Rules! Complete Guide to Onsen Etiquette and How To Enjoy a Traditional Bath in Japan
*This information is from the time of this article's publication.
*Prices and options mentioned are subject to change.
*Unless stated otherwise, all prices include tax.