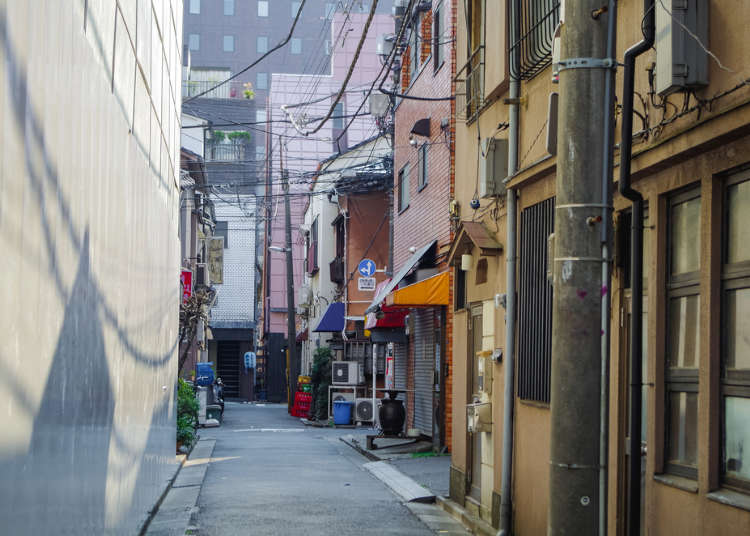 Here are the best Old Towns (Shitamachi) in Tokyo and Surroundings, with travel tips and more, according to LIVE JAPAN, a top-class travel website for visitors to Japan. Our ranking is based on the most popular pages viewed by foreign visitors in a given category.

For instance, Tsukiji Outer Market, Ameyoko Shopping Street, Yanaka Ginza Shopping Street and other related spots will be listed. Be sure to check them out during your visit to Tokyo and Surroundings! 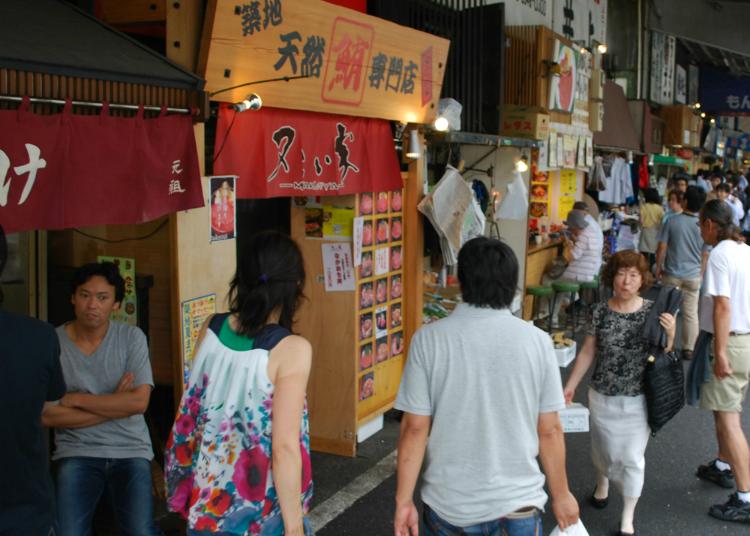 The Tsukiji Outer Market is located on the outer rim of the famous wholesale market in Tokyo. About 400 shops specialize in food-related products, such as freshly caught seafood, good-quality fresh produce, cooking tools, and tableware. There are also many restaurants that serve fresh seafood in the form of sushi and kaisen-don (seafood over rice). It is a very popular spot, not only for tourists but also general consumers. Seminars and events about food are held from time to time. The general information center, Johoichiba Puratto Tsukiji, opened in 2012. The center offers information about shops, sightseeing, and transportation, and it sells center-original goods. The center also has space for resting, and you can stop by at your convenience while you are sightseeing. Although the Tsukiji Outer Market will remain, the inner wholesale market moved to Toyosu in 2017. 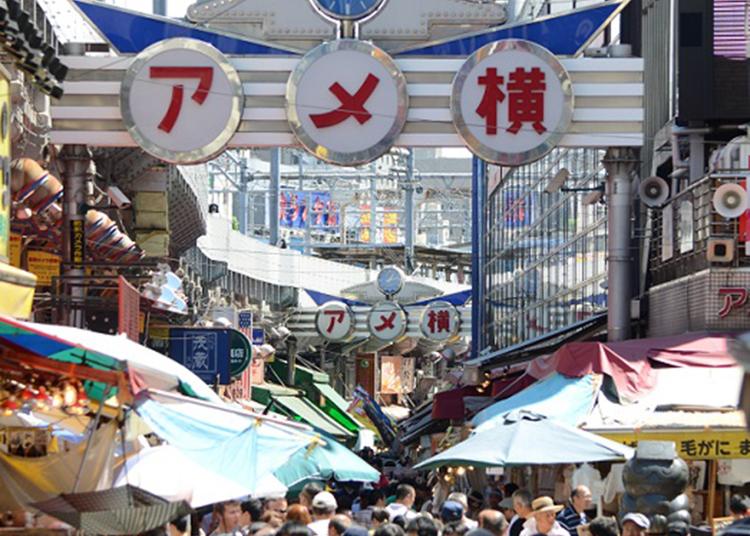 The Ameyayokocho shotengai (shopping street) is located between JR Okachimachi Station and JR Ueno Station. It is a lively market with the charming atmosphere of historic downtown Tokyo and is visited by many shoppers every day. In addition to the well-known fish and crab, there is a wide variety of shops selling everything from clothing to Asian food, as well as food stalls. Looking back at its history, it is said to have grown out of a black market that sprung up in the years following the end of World War II. Initially, when sweets were valuable, many shops sold sweet potato candies and candies called amedama, but once the Korean War started in 1950, many shops began selling articles procured from the American military forces and the Market gradually changed from a black market to a shopping district. Because it was selling imported goods, it began to be called Ameyoko, which is a combination of ”Ameya-yokocho” (candy store lane) and ”Amerika-yokocho” (America lane). Even today, there is an ”Ameya-yokocho” sign on the Ueno side where many food stores are, and an ”Ameyoko” sign on the Okachimachi side, where many import stores are. It is well-known as a market full of shoppers buying fresh food at the end of the year to prepare for the New Year. 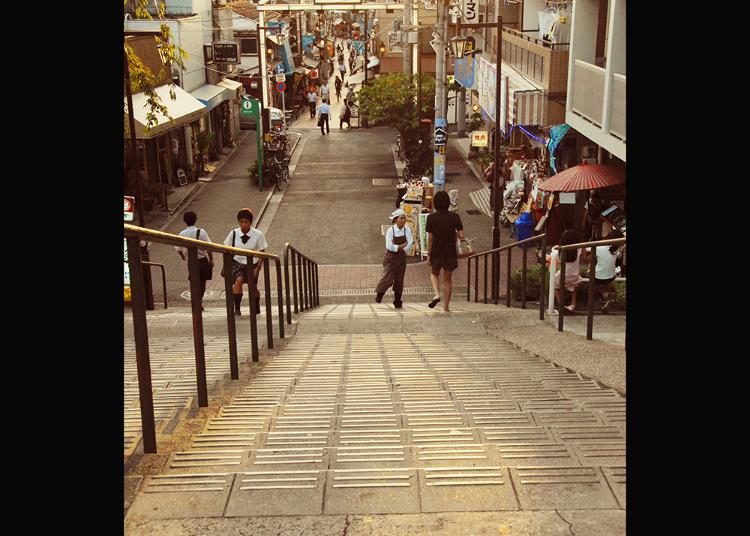 Yanaka Ginza Shopping District is a local shopping street in downtown Tokyo that retains the good old shitamachi atmosphere. The friendly service, the close rapport between staff and the customer, and the human warmth keep customers coming back. This district is located in an area called Yanesen, which is the connected areas of Yanaka, Nezu and Sendagi. It is so popular that many people come from afar, especially on weekends. There are 70 stores along the 170-meter-long street, mainly older private shops. Not only locals but tourists as well can enjoy traditional Japanese sweets, cakes, crafts, take-out dishes, cafes and so on. Enjoy a stroll along this pleasant street with its charming awnings, signboards and cat-motif street furniture. 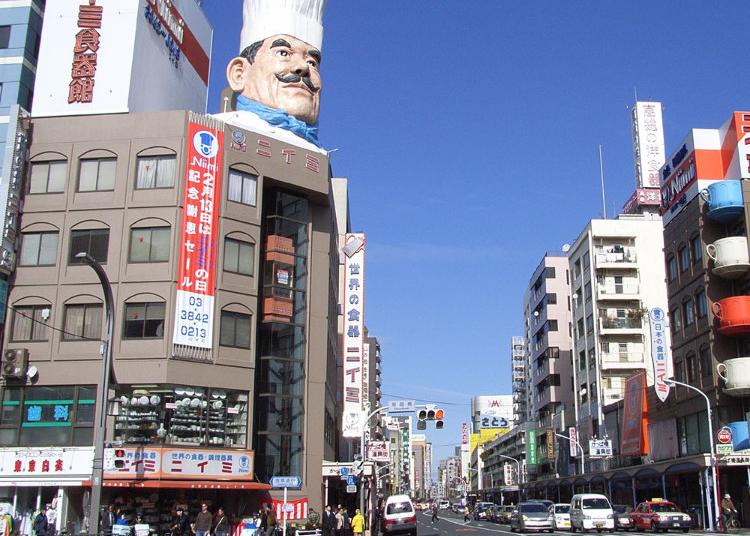 Kappabashi Dogu Gai or the Kappa-bashi Cooking Tools District is a shopping district that stretches around 800 meters from north to south between the Asakusa and Ueno areas. It originated from the merchant stalls trading secondhand tools on both sides of the Shinbori-gawa River in the early Taisho era (1912-1926). Around the same time as the reconstruction efforts were being made following the Great Kanto Earthquake of 1923, food-related stores began gathering around the Kappa-bashi area, particularly those selling confectionery tools. The area developed into a specialized shopping district where stores in various industries that meet the needs of the time for the food and drink industry are gathered. Currently, around 170 stores in a variety of fields are operating. From cooking tools and tableware to kitchen equipment and baking supplies, many tools are being sold. In the center of the shopping district, a gold-leafed bronze “Kawataro the kappa” (the literal translation of kappa is a river boy, an imaginary figure in folklore) statue looks up at the sky and prays for a thriving business. 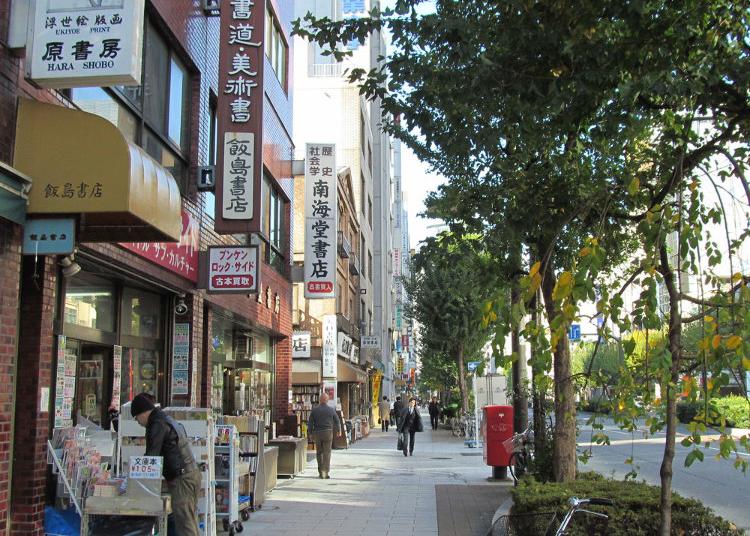 Jimbocho is known as one of the largest bookshop districts in the world; it is also called an antique-bookshop district. There are about 150 bookshops specializing in antiques, most of them located near the Jimbocho Intersection, where Yasukuni-dori Street crosses Hakusan-dori Street. You can find a variety of books when strolling through the district. While Jimbocho is considered an area for antique books, there are a surprising number of shops with new books, too. Yet these are slightly different from ordinary bookshops; they choose their stock differently, and competition is fierce. 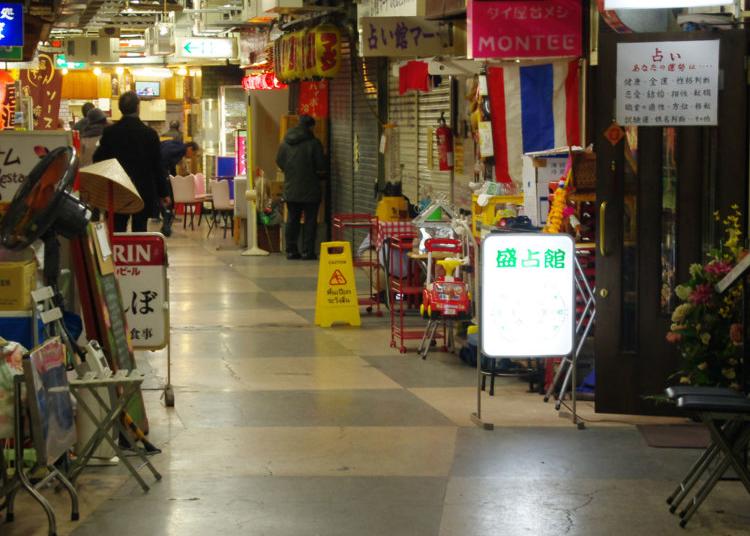 When it was built in 1955, Asakusa Underground Mall became the third such structure in Japan, and it is now the oldest remaining. The mall is filled with a nostalgic atmosphere, as if you had traveled back to the Showa Era (1926-1989), with bare pipes on the ceiling and water leaking onto the floor. The 23 shops here include a very cheap barber (haircut: 700 JPY), yakisoba eatery (one plate: 350 JPY), DVD shop, Thai restaurant, sundry goods store with permanent discounts of 50–90%, fortune teller, Qigong shop, and printing shop. Each one is small (33 square meters) and fun to explore. 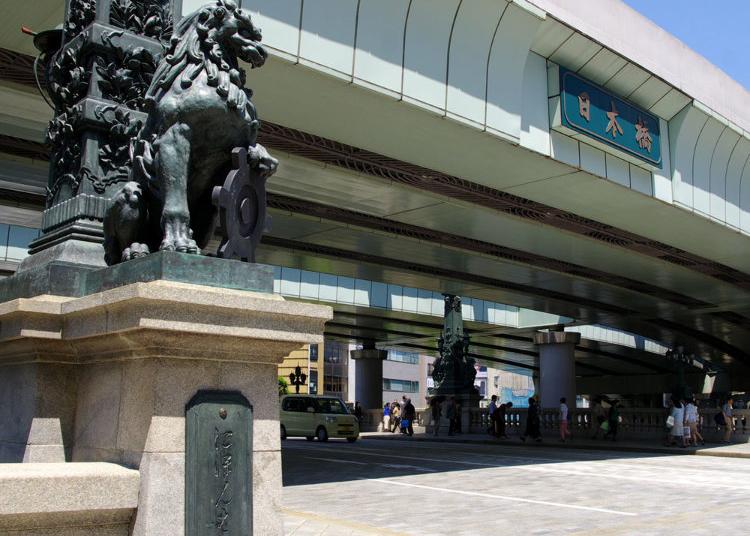 The town of Nihonbashi was established at the same time as the Edo Shogunate in 1603 and served as the heart of Edo (Tokyo) during the Edo period (1603-1868). Being the starting point of the Edo Five Routes established by the Edo Shogunate (Tokaido, Nakasendo, Koshu Kaido, Nikko Kaido and Oshu Kaido), it became a hub for people and products from all over the country and developed into a center of commerce, the economy and entertainment. Today, it has grown into an elegant town that has fused the traditional and modern aspects of Tokyo by adopting new facilities and cultures while retaining the good old Edo feel. One of the newcomers is COREDO Muromachi 1, renewed in 2014. There is a tourist information desk on the first floor below-ground, where concierges fluent in English will help you enjoy the town with information on time-honored shops and events about town. One way to appreciate Nihonbashi is from the water. You can board a cruise boat from Nihonbashi Boarding Dock and enjoy a view that can only be seen from the canals and rivers of Tokyo. 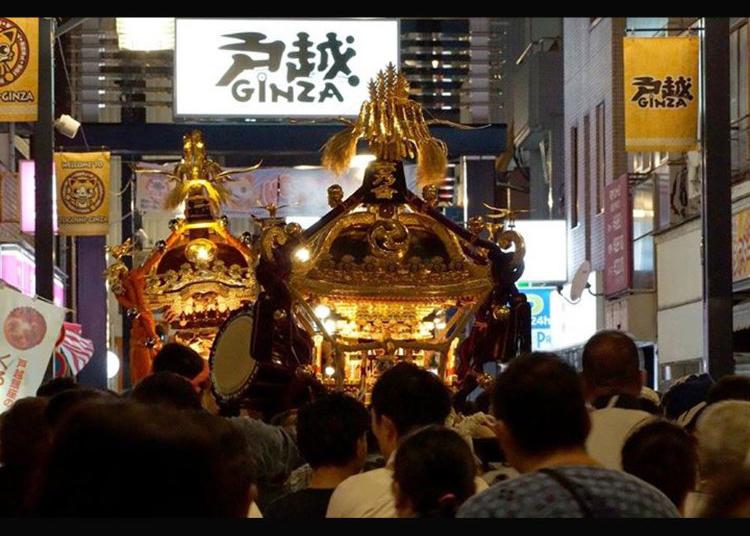 The 1.3 km-long Togoshi Ginza Shopping Street is one of the longest such streets in the Kanto area. It is a very lively street with many customers even on weekdays. There are 400 shops comprising three promotional organizations: specialty shops selling necessities such as grocery stores, clothing stores and general stores as well as essential services including medical clinics, welfare facilities, banks and dry cleaners. There is even a golf school and glass workshop to enjoy one's spare time. Overall, this is a community-based shopping district. It has a popular mascot character, Togoshi Ginjiro (commonly called Gin-chan) who livens up the street and events. Togoshi Ginza croquette (Japanese hash brown) is a popular food here that many shops make in their own style. Food fairs from different regions are held regularly at Gin-chan Bussan Theater; they offer free tastings and giveaways, too. 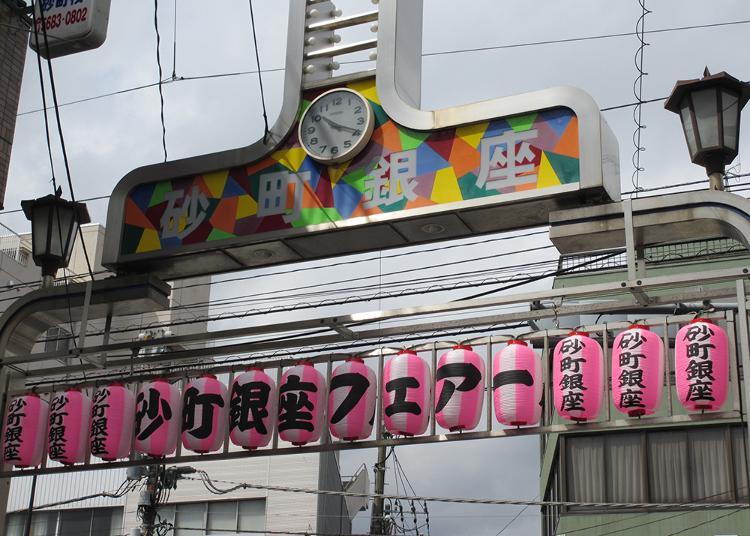 A 670 meter long shopping street with various stores. It used to be a small shopping street with only 30 stores called Heiwakai. When the shopping street received praise from a councilor of former Tokyo City in October 1932, its name was renewed to the current name. During the war, the area was completely destroyed and after the war, people returned to here to restart business. And then the number of stores increased rapidly and by 1963 the shopping street became almost the same size as today. The street organizes a variety of events such as the Hana-matsuri (flower festival) parade in spring, Koto’s traditional summer festival, Tanabata-matsuri (the star festival), beautiful illuminations during Christmas season as well as tombola and monthly Bakaneichi (crazy bargain sale held on 10th). 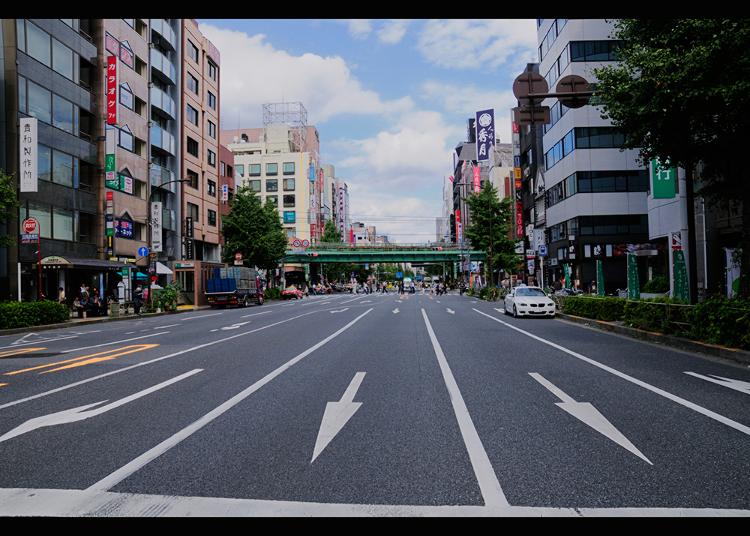 Edo-dori Tonya-gai (Edo Street wholesale District) is a street spanning from Asakusa bridge on Kanda River, across the JR Sobu Line tracks, to the Kuramaei-dori intersection. There are wholesalers such as long-established Japanese doll shops, toy shops and stationery shops along both sides of the 700-meter long street which retains an old shitamachi (downtown) atmosphere. The items sold differ from store to store and include products unique to Japan such as Japanese dolls and sensu (Japanese folding fan), as well as imported goods. Shops that sell beads and other craft and hobby goods are increasing in number and popularity. There is also a large number of shops that sell items for window displays and packaging. The wholesalers on this street are open to the public as well as to retailers, so anyone is welcome. There are plenty of restaurants along the street, so you can take a leisurely stroll while resting along the way.