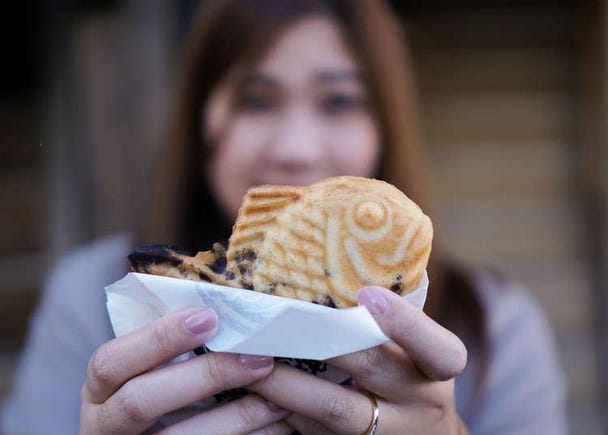 'I Wish We Had These Back Home!' Real Travelers Reveal Favorite Japanese Sweets & Snacks

Tourists to Japan share exclusive insights on their favorite Japanese sweets from fruit-packed sandwiches to animal shaped pastries and saucey dumplings on a stick!

One of Japan’s many modern wonders is its world of snacks. Convenience stores and confectionary shops peddle all kinds of treats spilling forth from the shelves in a rainbow of colors. Not surprisingly, snacks top the list of many visitors to Japan, so who better to ask for recommendations? We spoke with some sugar-loving travelers about their favorite snacks, all of which can be found the length and breadth of the country. 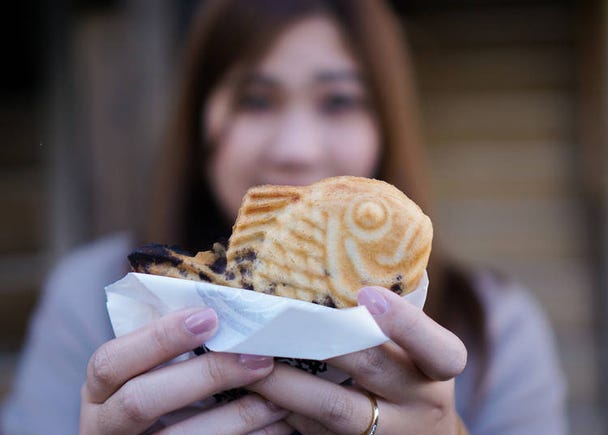 Sweet taiyaki is hard to resist!

When asked about her favorite snack or dessert in Japan, Melissa from Australia decided on a custard pancake/toasted sandwich she ate in Tokyo’s Ikebukuro district. These crispy fish-shaped pastries are called taiyaki (‘tai’ is sea bream, the fish from which it takes its shape; ‘yaki’ means grilled or cooked). These tasty snacks resemble fish in shape only; they are toasted doughy pancakes with a filling of custard, chocolate or anko (sweet red bean paste).

There are dedicated taiyaki shops all around Japan, and you’ll often find them available at local festivals, too. If you’re lucky, you might find the croissant versions which saw a huge popularity boom fairly recently. 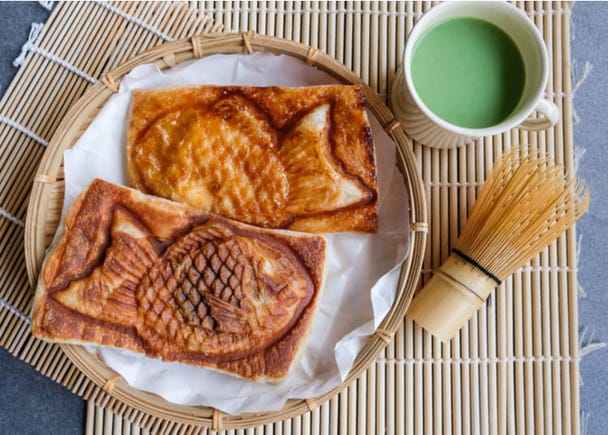 Croissant taiyaki like these saw a popularity boom recently

“The first time I heard about taiyaki, I thought it would have some sort of fish flavour... I was delightfully surprised to find out that wasn't the case! There was a cute little taiyaki shop near the university where I studied abroad for a bit; they had this croissant-style one too. Ever since, I've been trying to find as many different taiyaki as I can! I love the cute bite-sized ones I see at stations sometimes,” British traveler Cassie agreed with Melissa.

David from Australia shared the sentiment. “If you go to Asakusa please try the fish-shaped pancakes with salt vanilla cream inside; they are the best,” he said. While Asakusa’s taiyaki is indeed delicious, many other districts across Tokyo have window shops specializing in this treat, from Nihombashi to Koenji to Kita Senju to Ebisu. Basically, you’ll rarely be too far from one!

Kashi Pan - You Put What in a Sandwich? 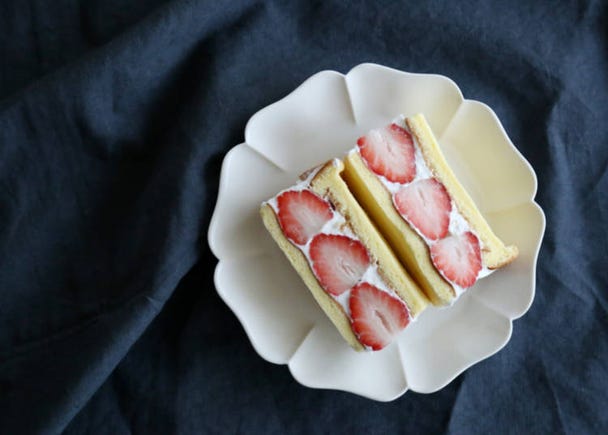 Though it may sound like an oxymoron, sweet sandwiches are the craze in Japan these days. Cream-filled, fruit packed, custard-buttered, and chocolate-breaded sandwiches dominate the shelves of Japan’s convenience stores.

One of the most popular versions is the strawberries and cream sandwich. You can find these in most convenience stores, and it’s a great light dessert after one of the famous egg-mayo sandwiches, if you’re feeling in a bready mood!

Eric from the U.S, told us he bought a chocolate, whipped cream sandwich just to see how it tasted. He liked it so much that he “had to get another on the way back to the train station”, yet claimed it “wasn’t overly sweet”. This may come as surprise, given the bright colors and packaging that typify this distinctly Japanese category of sandwich.

“The first time I saw a fruit sandwich, I thought it looked very strange,” said Glen from the UK. “But after a few too many drinks one night, I tried one with strawberries and kiwi. Actually, it was delicious!”

Like with many Japanese treats, first impressions don’t always paint the full picture!

Japanese name: Kashi Pan
What it is: Sweet sandwiches/fruit sandwiches
Where to buy: Convenience stores and supermarkets
Price range: 200 – 400 yen

Melon Pan - "I wish you could find it back home!" 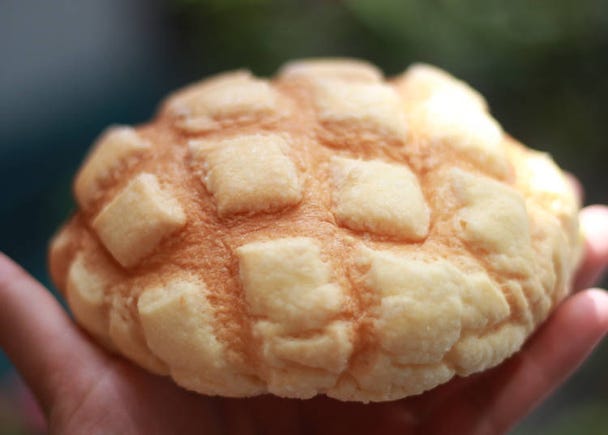 Melon pan often doesn't even have a hint of melon flavor

The Japanese love a good fruit-themed snack, and the melon seems to one of the most inspiring. Melon breads have become particularly popular of late, from breads that slightly resemble its shape, to longer baguette-style croissants that are bursting from within with saccharine flavor.

There are plenty of spots around the country where you can find them, but bakeries and convenience stores are the easiest ones to spot.

Bianca from Australia, told us her favorite treat in Japan was melon cream bread, a sweetened snack found in convenience stores across the country. She even claimed she “was eating at least one a day”; that’s how good they taste. 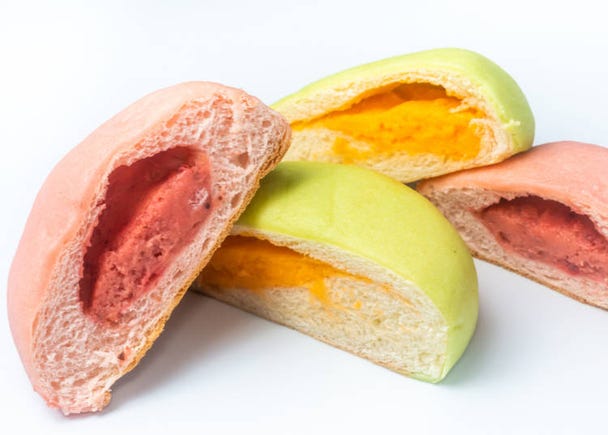 Also known as melon pan, these breads don’t usually taste anything like melon at all. Much like taiyaki, they are named for what they resemble instead. Normally, melon pan is a type of sweet bun with a crispy outer layer. The outer layer is cut with a cross-hatch pattern, and often has sugar sprinkled on the top. However, in recent years, manufacturers have started to offer them in a variety of flavors including strawberry, chocolate, and matcha (green tea). It even sometimes comes with a creamy filling inside, much like the ones Bianca couldn’t get enough of!

“I wish you could find melon pan back home. I tried making it myself but it just wasn't the same! I loved finding freshly baked melon pan in bakeries, or at specialty melon pan stores. Once I had it with ice cream and it's one of my happiest snack memories," another British traveler told us.

Japanese Name: Melon Pan
What it is: Melon-shaped bread, with or without fillings
Where to buy: Convenience stores, supermarkets, bakeries, speciality stores
Price range: 150 – 300 yen 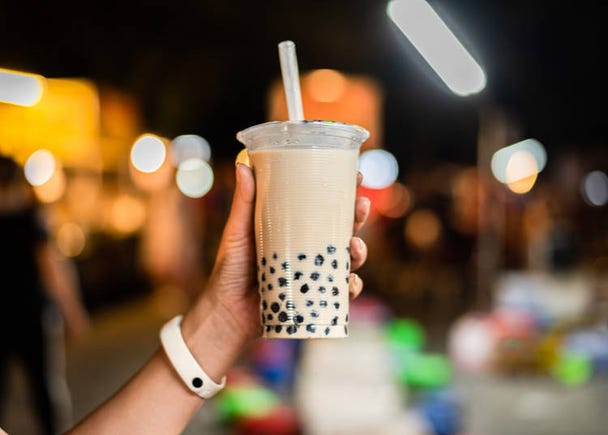 Bubble tea has taken over Tokyo!

Few snacks have captured the imagination of travelers to Japan like bubble tea, also known as pearl milk tea, boba tea and tapioca tea. Certain districts of Tokyo, Shimokitazawa being one of the most notable, are now awash in window shops selling bubble tea in all its myriad forms. Originating in Taiwan in the 1980s, the drink is defined by its bubble-like pearls, which are tiny balls of tapioca - a gluten-free starch that comes from the cassava root.

Dewi from Indonesia told us her favorite treat was a “unique” flavored bubble tea which she picked up in Otaru, Hokkaido. Ella from Sweden echoed the sentiment, saying she “dreams about going back to Japan just for the bubble tea”.

Though Shimokitazawa is a tapioca magnet, there are a host of other areas of the capital, and beyond, where you can indulge in this liquid delight. Major tourist hubs like Shinjuku, Shibuya, Harajuku and Omotesando all house speciality bubble tea cafes.

Dango – Dumplings on a Stick! 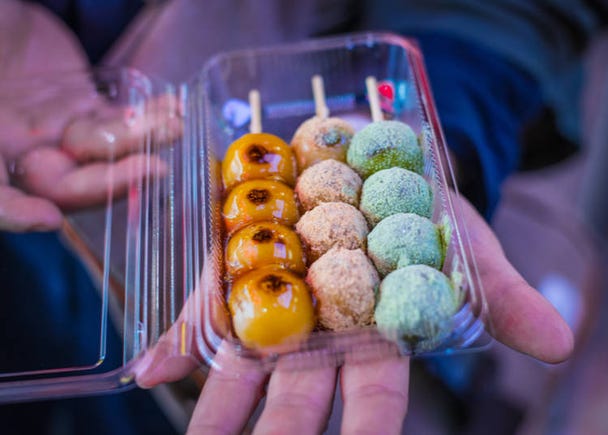 It may sound like the name of a Quentin Tarantino film, but dango is in fact a skewered Japanese dumpling made from mochiko sticky rice. Usually three to five dango go on a skewer before they are roasted on a grill and basted with a sweet soy glaze., The two most popular forms are white dango with soy, or hanami dango (named after cherry blossom picknicks) consisting of three mochiko balls -- one white, one pink, one green; the colors of spring. 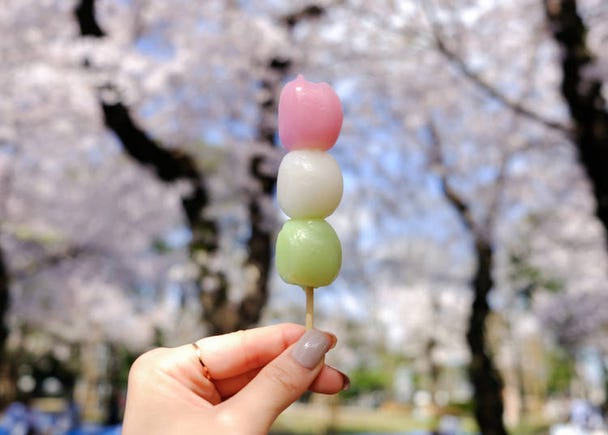 Dango seem to come in all colors under the sun!

Tan Seng from Malaysia said one his favorite treats from Japan was the dango skewer he ate outside Meiji Jingu Shrine (located in Shibuya’s sprawling Yoyogi Park). Dango skewers are commonly sold outside popular shrines, temples and monuments. And sometimes you’ll get them at the top of hiker-friendly mountains, like Takao san in west Tokyo, or at Japanese spring festivals.

Dave from Ireland was another fan of Japan’s mochi-based snacks. He told us, “With a bit of soy sauce lathered on top, dango was one of my strangest, yet most satisfying, culinary pleasures in Japan.”