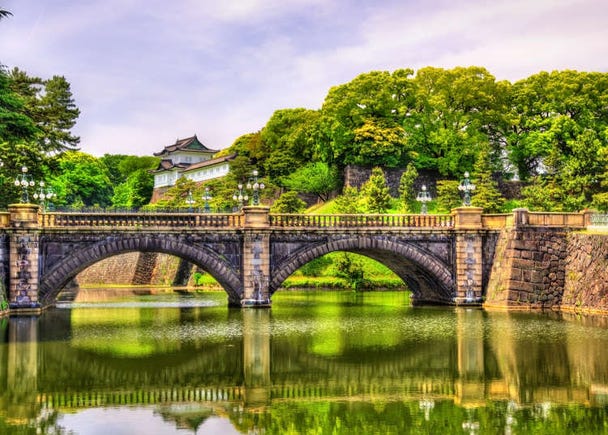 Complete Guide to the Tokyo Imperial Palace: Tour Reservations and the Best Ways to Enjoy Your Visit

The Emperor of Japan, one of the most revered symbols of Japan, resides in the Tokyo Imperial Palace. This is one of the tourist attractions with the largest number of visitors in the world.

Built over 400 years ago, the Tokyo Imperial Palace is adorned with flowers all year round, with many natural and green spaces, and there are numerous sights to see within. All these are free for the public to view at their own pleasure, making it a great place to just drop by if you’re ever in the mood for a visit.

We’ll walk you through some of these sights in the Tokyo Imperial Palace with photos!

Tokyo Imperial Palace is an oasis in the city 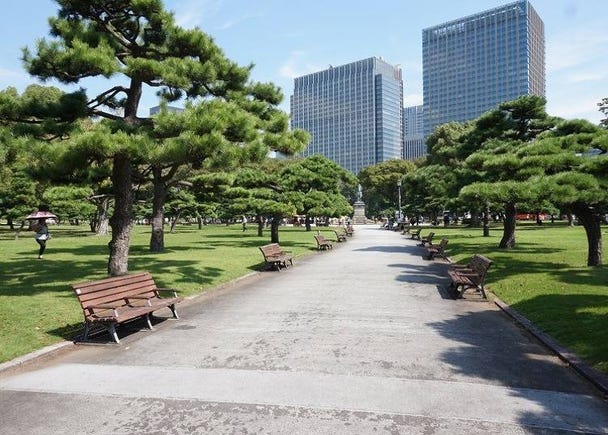 In the Tokyo Imperial Palace, there are three main areas that you can visit, the East Gardens and Outer Gardens, which you can visit for a stroll without any prior reservations, and the Inner Palace, which requires reservations.

The palace grounds span approximately 230 hectares (568 acres). Just a 15-minute walk away from Tokyo Station, the vast expanse of greenery and natural landscapes makes it an oasis amidst the towering skyscrapers of the big city.

Adorned with a forest of black pine trees and benches along the walking route, the Outer Gardens are an excellent place where you can take breaks while taking for a leisurely stroll.

First, we’ll introduce the Outer Gardens, which you can visit for free.

The statue of Kusunoki Masashige, with his undying loyalty for the emperor 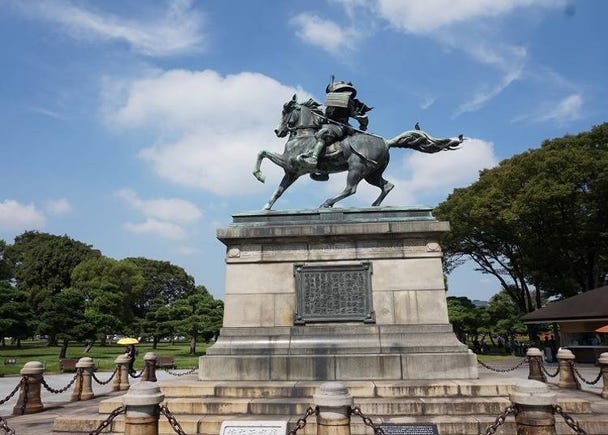 In 1900, the statue of Kusunoki Masashige was erected in the southeastern side of the Outer Palace, and is a popular photo spot, as one of the Three Great Copper Statues of Tokyo. The subject of the statue, Kusunoki Masashige, was a loyal samurai who served the 96th Emperor, Emperor Go-Daigo. He contributed immensely to overthrowing the Kamakura Shogunate, and is a beloved figure of the Japanese.

As it is considered impolite for the face of the statue to face the imperial palace directly, one curious trait of the statue is that it faces the opposite direction of the Tokyo Imperial Palace. The lively horse that the figure sits upon is another draw of the statue, and regardless of which angle you look at it, the balance of the sculpture looks equally beautiful.

The Nijūbashi Bridge, which leads to the Inner Palace 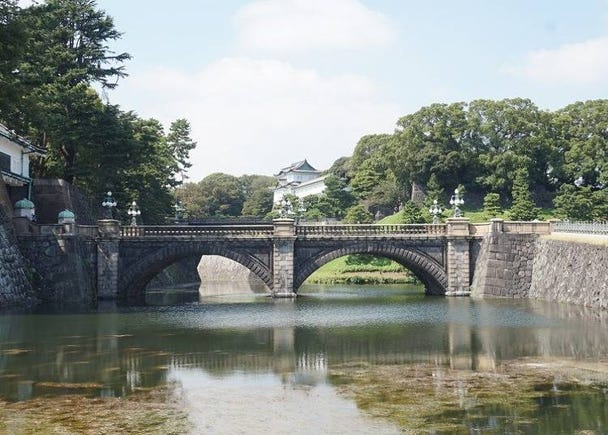 One of the bridges constructed to reach the Inner Palace from the square in front of the Tokyo Imperial Palace is Nijūbashi Bridge, which was constructed in 1614. Renovated in 1888, and once more in 1964, its shape changed to become what it is now. The beautiful castle which you see behind the bridge is Fushimi-yagura, which was moved over from Kyoto in 1628, and the sight of it paired with Nijūbashi Bridge makes for a lovely view.

The bridge is usually closed to the public, and only open twice a year, on the Emperor’s birthday and on New Year’s Day, when the public is permitted to enter the Inner Palace, where the Emperor greets the masses.

Sakurada-mon: The largest existing gate to the Tokyo Imperial Palace 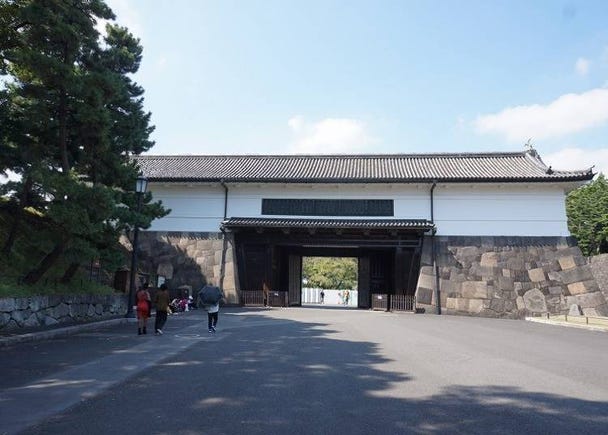 Built in 1612, the Sakurada-mon is the largest surviving gate to the Tokyo Imperial Palace. Destroyed in a fire during the Great Kanto Earthquake of 1923, it was reconstructed into the steel storehouse structure that stands today. The contrast of the finely shaped stone bottom with the white storehouse above is a beautiful sight, and is a popular photo spot for tourists. The double structure of the inner and outer gates allows for a gap in between the two, and it is a great place to see the streets of Tokyo from afar.

From the Outer Gardens, we introduced the Kusunoki Masashige statue, the Nijūbashi Bridge, and the Sakurada-mon gate. Next, let’s check out the East Gardens.

Ninomaru Gardens, where you can enjoy nature to the fullest 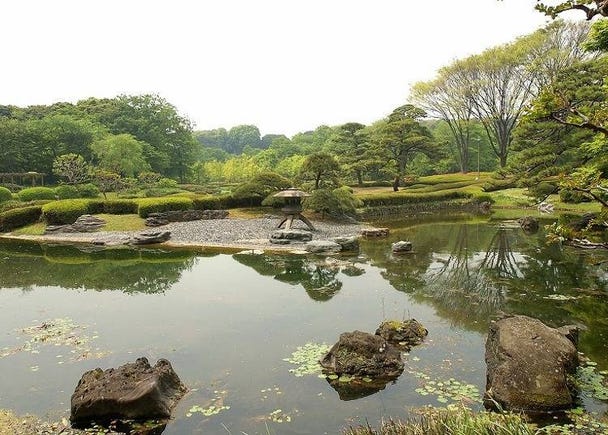 A garden with varied landscapes intended for walks and strolls, it was once the villa of shoguns. At approximately 20 hectares (49 acres), this large garden has plum blossoms in February, azaleas in April and May, irises in June, and maple in Autumn, and you can enjoy the changing scenery all throughout the year.

The ponds in the garden are home to fish, turtles, and other small animals, and you can even see the Hirenaganishiki-goi, a breed of koi fish that is highly prized in Japan. Affectionately referred to as the Ninomaru Thicket for its forest-like atmosphere in the middle of the city, it’s a place where you can relax amidst nature. 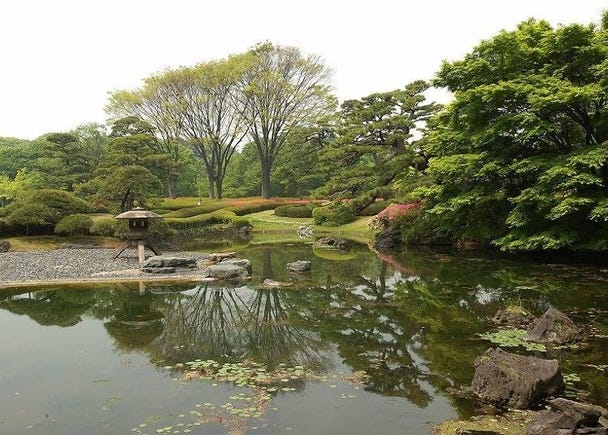 The ruins of the Donjon of Edo Castle, where you can see Japan’s largest donjon 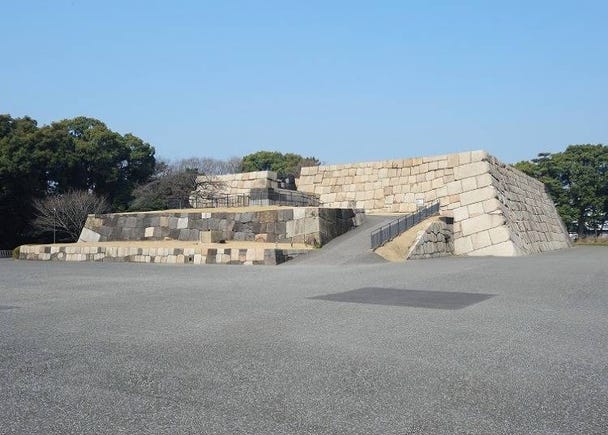 Previously where Edo Castle stood, all that’s left at the Ruins of the Donjon of Edo Castle is its stone foundation. Standing at 11 meters high and 40 meters across on each side, it is a breathtaking sight up close, as the largest donjon in Japan. Destroyed in the Great Fire of Meireki in 1657, all that’s left of the Edo Castle is the stone foundation, which still bears blackened areas and marks from the fire to this day.

The area where the castle stood has become an observation deck instead, and a slope was constructed for easier access. From the top of the observation deck, you can catch a 360 degree panoramic view of the nature in the Imperial Palace surrounded by the towering skyscrapers of Tokyo.

The Inner Palace, which you can visit if you make a reservation prior to visiting

If you make a reservation beforehand, it’s possible to tour the Inner Palace. Besides making reservations on the day itself, reservations can be made over the internet as well, and can be done in a variety of languages including English, French, Spanish, Chinese, and Korean, amongst others. 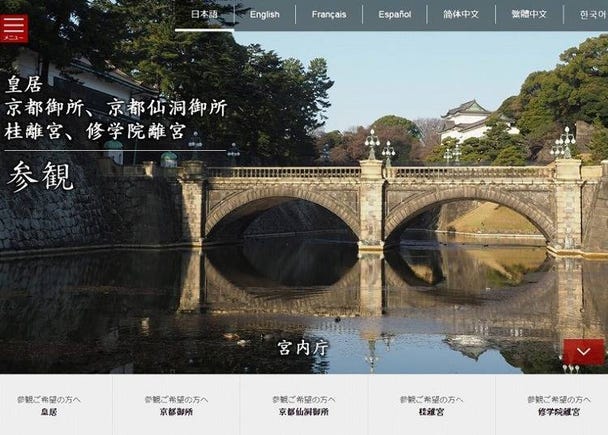 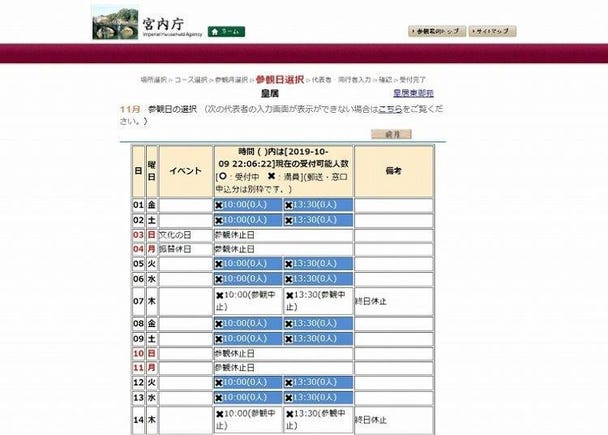 On top of this, personal identification documents such as your passport are needed for entry, so do remember to bring them on the day of your visit.

There is a smartphone application, “Imperial Palaces Guide”, available for download. The application provides audio tours, and like the home page, is available in multiple languages, including English, French, Spanish, Chinese, and Korean.

It’s recommended that you download the application before the tour itself, and on the day of the tour, you can request for an English speaking guide to bring you around too.

Within the Inner Palace, there are shops too, where you can buy rare souvenirs. From Japanese sake and sweets, to dishware and Japanese wrapping cloths, these souvenirs bear the motif of the chrysanthemum flower, which is the symbol of the Japanese Imperial family.

With so many items that are only available for sale here, be sure to check out the souvenir shop. Do be aware that you’ll only have a chance to buy souvenirs before the tour starts, so take note!

During the tour, you’ll get to see the Imperial Household Agency up close, which is a government agency responsible for handling matters related to the Imperial Family, as well as the Emperor’s residence within the Tokyo Imperial Palace. Do grab this chance to solemnly experience Japanese culture in this historic building.

One of the draws of the Tokyo Imperial Palace is the different ways you can experience it, from a leisurely stroll through the East Gardens and Outer Gardens, to the tour of the Inner Palace where you can view the chambers of the Emperor himself. We introduced numerous places of interest within the Imperial Palace, and if you have opportunity, be sure to check them out!

Visit the remains of Edo-jo Castle and Taste Matcha!
Meiji Shrine, Imperial Palace, Nihonbashi Walking Tour
1-Day Tokyo Private Sightseeing Tour (Eng. Speaking Driver)
*This information is from the time of this article's publication.
*Prices and options mentioned are subject to change.
*Unless stated otherwise, all prices include tax.