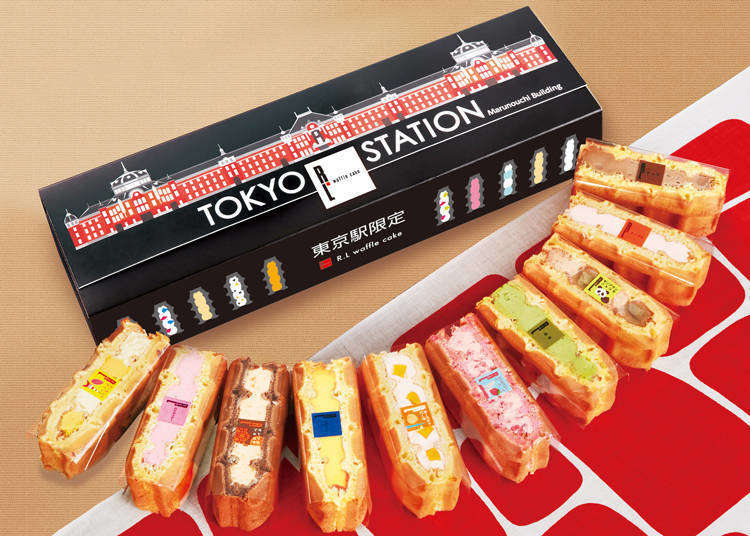 Top 23 Souvenirs in Tokyo Station: Shoppers Recommend What to Buy in GRANSTA 2019

GRANSTA is a huge shopping space located directly inside Tokyo Station on the first and underground floors. It has almost 100 shops (97 as of October 2019), and runs all the way between Yaesu and Marunouchi, making it a seriously popular spot for travelers. Once you pass the ticket gates, you don't have to leave and come back, either!

We took a trip to find out what popular souvenirs and gifts are around, and we found 23 must-haves for those looking for souvenirs in Tokyo. Our selections were made based on data obtained from talking to the folks shopping at GRANSTA.

There are many shops in GRANSTA and the sales area is very spacious. When you are waiting for a train and think, “I don’t have time to shop for souvenirs!”, then this article is for you. Let’s first begin with three hot items among the 23 selections of popular souvenirs to be introduced. 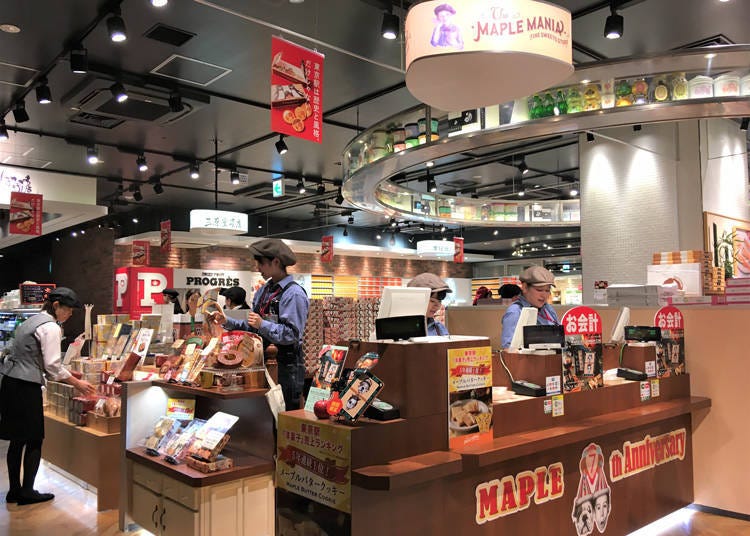 First up are the Maple Butter Cookies from "The Maple Mania." 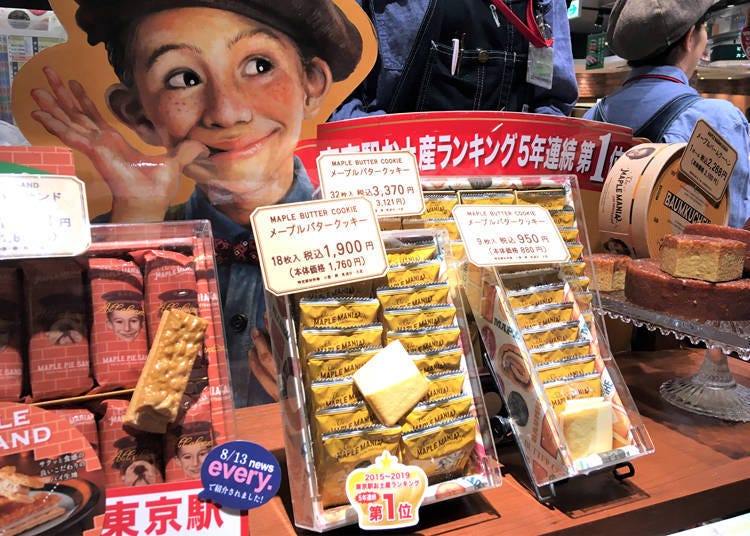 The box of 9 costing 950 yen (including tax) is the most popular. The popularity of this Tokyo Station souvenir is evident by it being ranked No. 1 for five consecutive years in a Tokyo Station City Management Council survey. More recently there has been an increase in the number of foreign tourists coming to buy this souvenir who have read about it on the Internet. 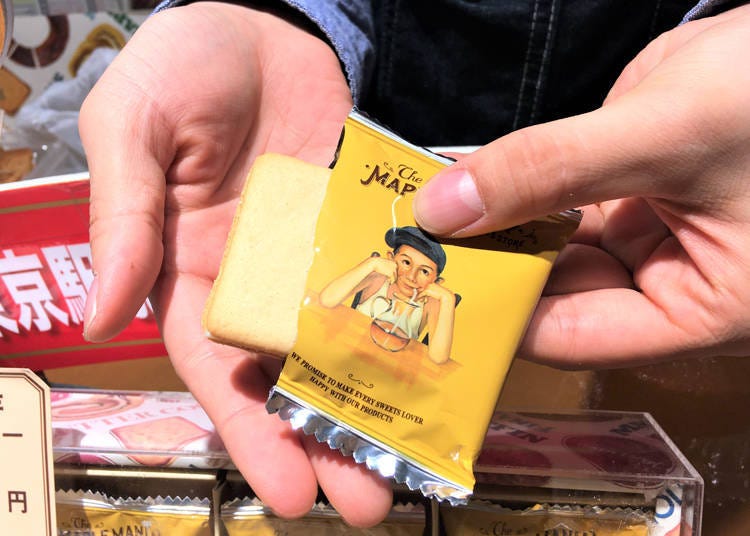 As its name suggests, the Maple Butter Cookie is a baked treat that has butter flavored white chocolate sandwiched inside crisp maple cookies. It has the distinct flavor of a pancake smothered in butter and maple syrup. Contrary to the image of it having a heavy taste because of the butter, it actually is quite light. If you prefer a less sweet flavor, then chilling it is recommended.

There are times when 2,600 of just these 9-piece boxes are sold in a single day! This item is consistently popular, so they are very careful to make sure they don't run out of stock towards the evening - so feel free to come and browse whenever you like! 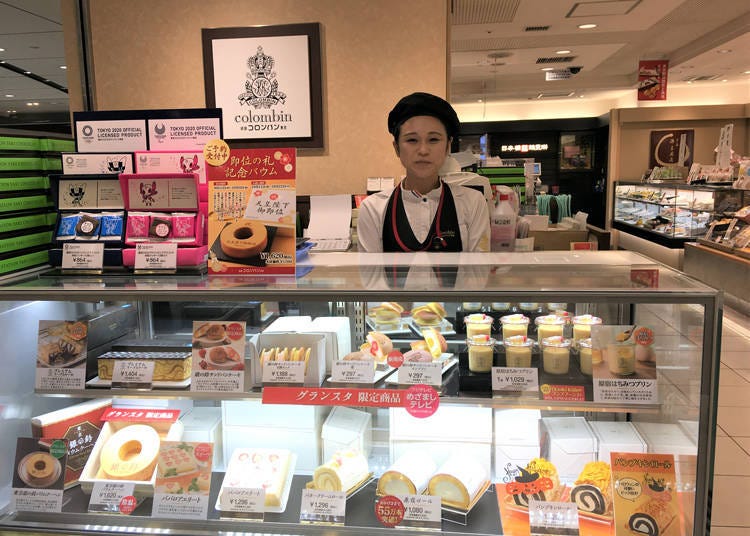 Next is the Gin no Suzu Strawberry Pancake Sandwich sold only at Colombin’s GRANSTA shop; 297 yen (including tax) each. 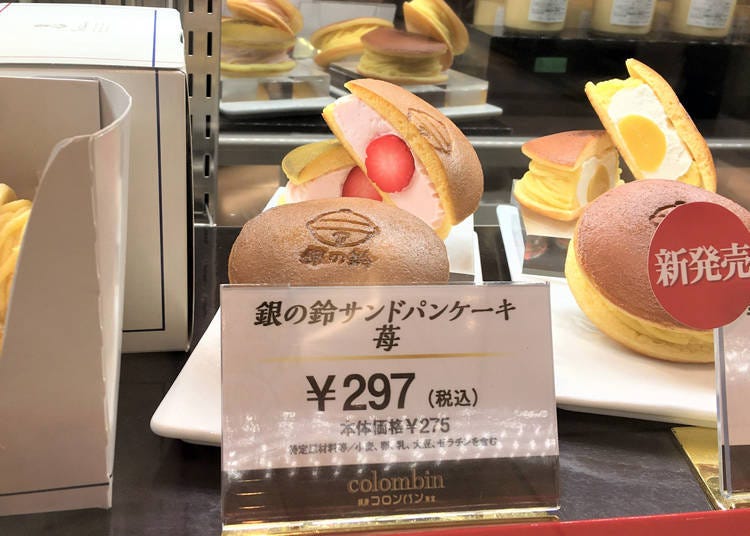 Strawberry flavored whipped cream and one whole strawberry are sandwiched in a soft, spongy pancake. Gin no Suzu is also the name of a famous spot in Tokyo Station used as a meeting place. The image of the Gin no Suzu is branded on the outer surface of the pancake. 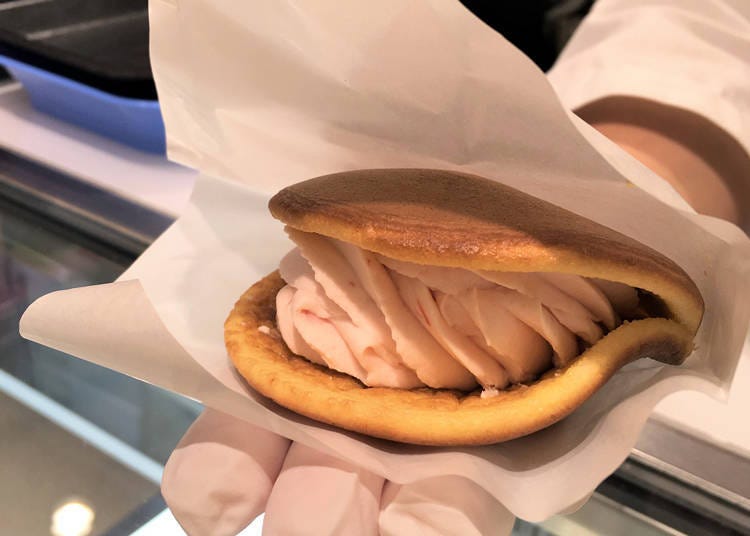 This is the Gin no Suzu Strawberry Pancake Sand, which is filled with delicious whipped cream. Many people buy it not only as a souvenir, but as a treat for themselves. Each is individually wrapped. A refrigerating package (free of charge and lasting up to 4 hours) is also included so that they can safely be taken back to your accommodation (so thoughtful)!

On weekdays this is often sold out by around six or seven in the evening, so we recommend you go earlier than that to ensure that you get your goodies! 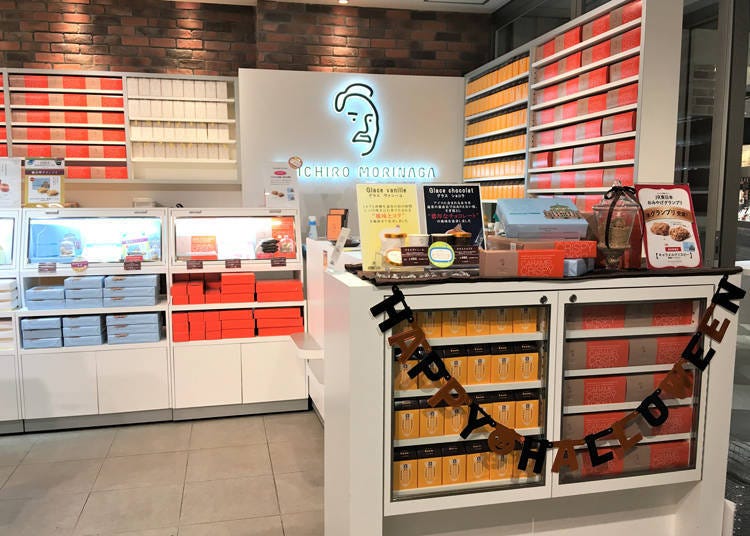 Caramel Crispy at the concept shop TAICHIRO MORINAGA, developed by Morinaga Confectionery, a well-known manufacturer of chocolate and caramel. 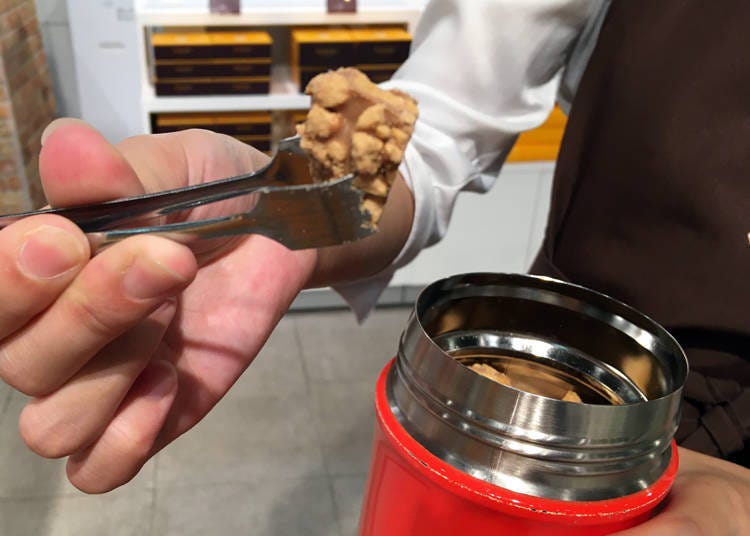 Biscuits containing condensed milk and caramel paste are coated with caramel milk chocolate, and then sprinkled with caramel chips. Sugar is added to make it less sweet and easier to eat. More than anything you should taste for yourself the new texture that is crisp, despite being made of caramel, which is made possible by an original manufacturing method of Morinaga. 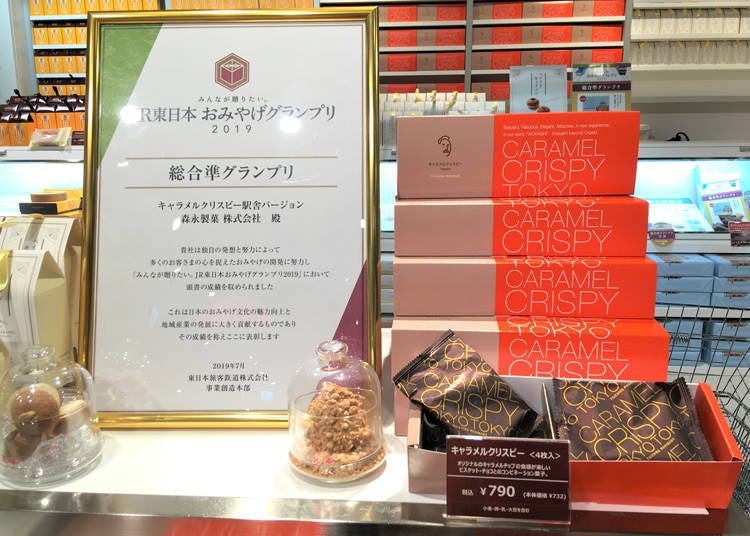 The box of 4 costing 790 yen (including tax) is the most popular. The grand Prix is selected by a Web ballot of the 197 types of souvenir entries entered from Tokyo and 16 prefectures in Eastern Japan, and this took second place in the JR Eastern Japan Souvenir Grand Prix 2019.

Often when shopping for confections as a gift, it seems that they are all rather similar. But among the 97 shops in GRANSTA, each strives to offer items that are uniquely different, highly original, and something that anyone would find essential with many but which could only be found here. Of the many such souvenirs to be found here, the following are highly popular Western confections that have been top sellers in 2019. 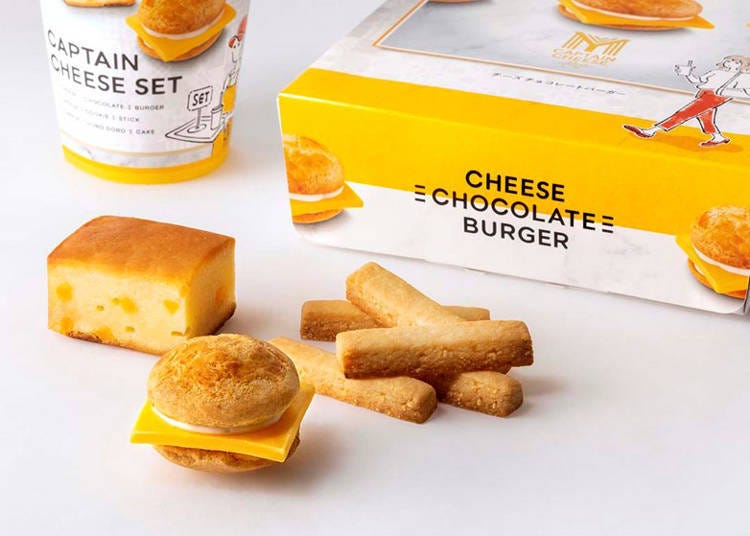 My Captain Cheese TOKYO opened in April 2019. This confection that looks like a hamburger is actually cheddar cheese chocolate in a cookie sandwich. Shown in the photo are the popular Cheese Chocolate Burger, the Cheese Cookie Sticks, and the Cheese Gorogoro Cake. One of each is sold in a set in 3 bags for 500 yen (including tax). 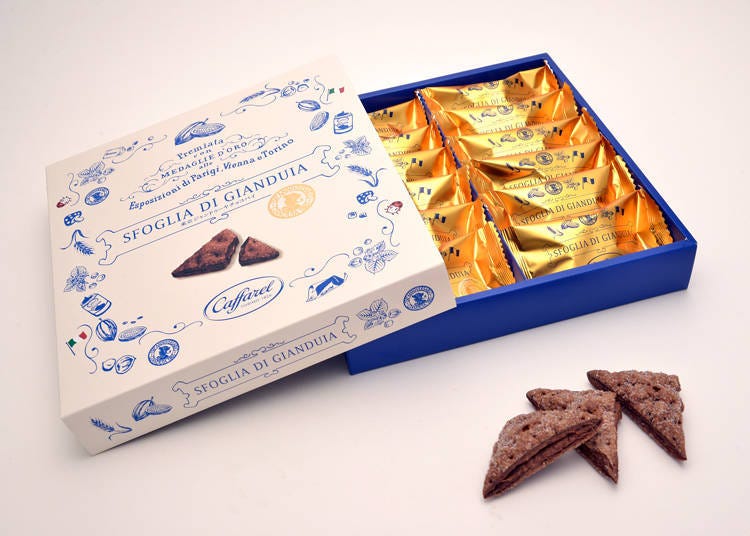 The Tokyo Gianduia Chocolate Pie sold by the long-established Italian chocolatier Caffarrel is only available at GRANSTA. Among those souvenirs that can only be purchased at Tokyo Station, this was ranked third in popularity with more than 1 million pieces sold annually. A box of 8 goes for 1,080 yen (tax included). 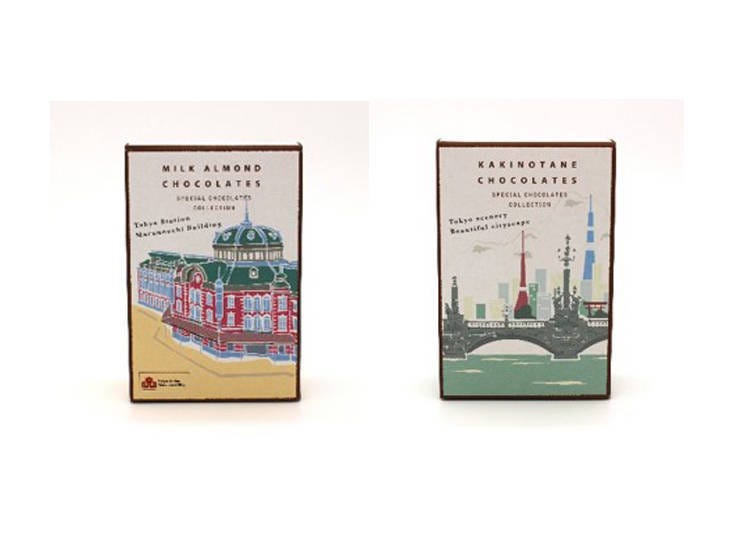 Chocolate covered nuts and truffles confections. This is a good gift to give to yourself. There are two types, both of which are only available at GRANSTA; the milk almond chocolate on the left and the chocolate persimmon on the right. 432 yen (including tax) for each. 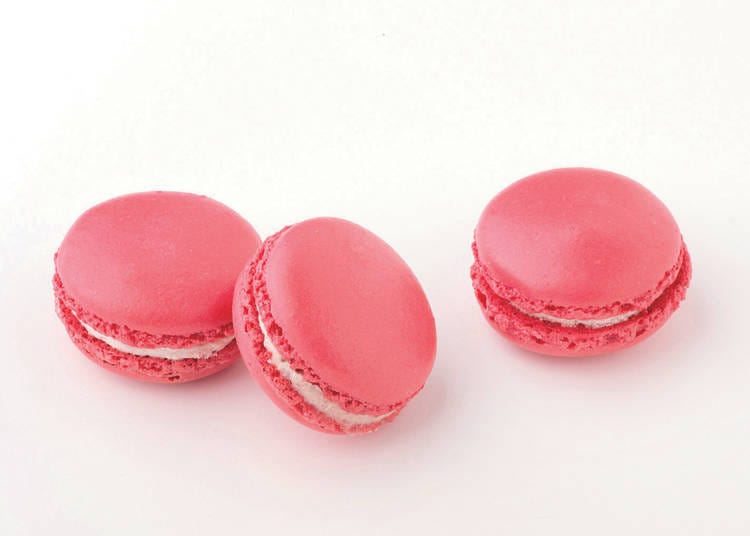 Dalloyau is one of France’s leading houses of gastronomy. Since 1832, it has been offering more than 100 types of confections ranging from the traditional to the new incorporating seasonal flavors. In addition to the Amaou shown in the photo, you can also enjoy such standards as Chocolat that are limited to the current season. 216 yen (tax included) each. 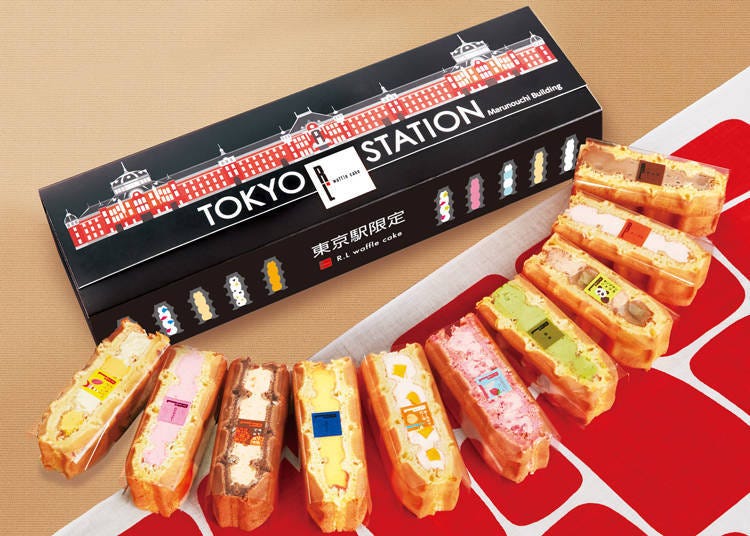 Kobe's waffle cake specialty store R.L is a unique brand launched by a first-class architect office. Packaged with the motif of the Marunouchi Station building, the Tokyo Station Limited Waffle Set of 10 includes five limited flavors. A box of 10 goes for 1,300 yen (tax included). * The package may change from time to time. 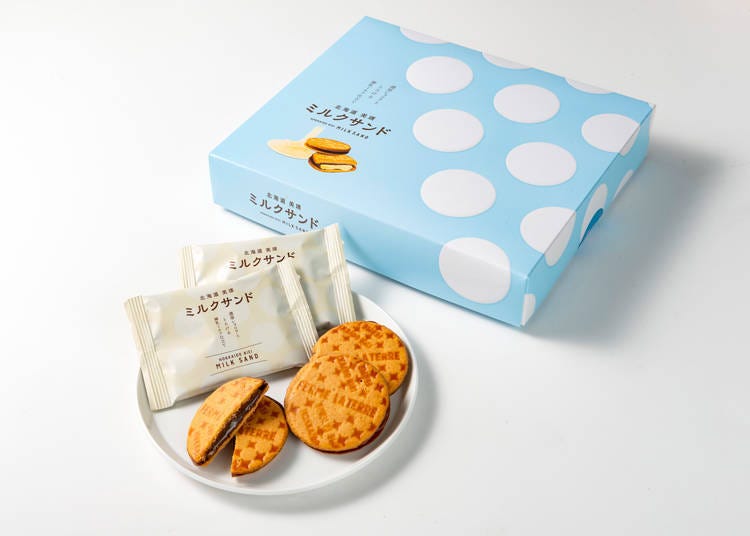 Terra Saison is careful to use only additive-free natural ingredients in its Milk Sand; "sand" being the abbreviated form of "sandwich". The cookies are made with wheat from Biei, Hokkaido and are filled with a condensed milk sauce coated in chocolate. Breaking open the cookie exposes the condensed milk which slowly oozes out. A box of 8 goes for 1,080 yen (tax included). 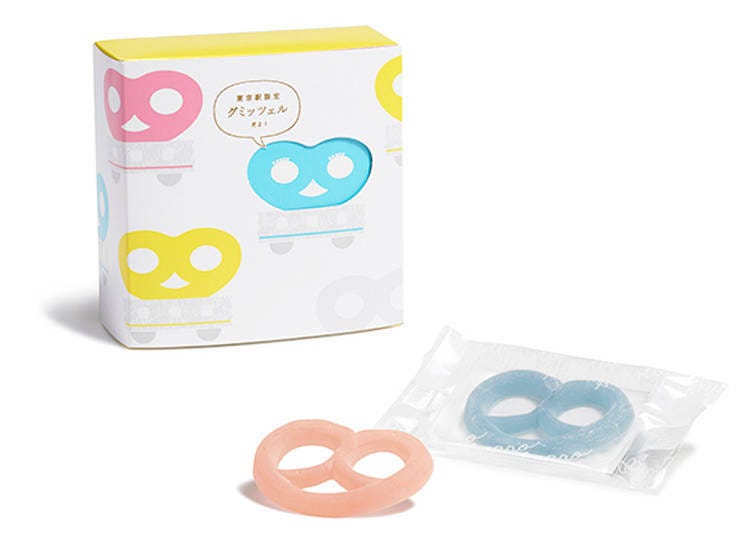 At the Hitotsubu Kanro, a directly-managed store of Kanro, which is known for its Kanro candy and Pure Gummy, the Gumizel Box 6-piece Set in a GRANSTA limited package is popular. A box contains six flavors, including orange and La France. 800 yen (tax included) per box. 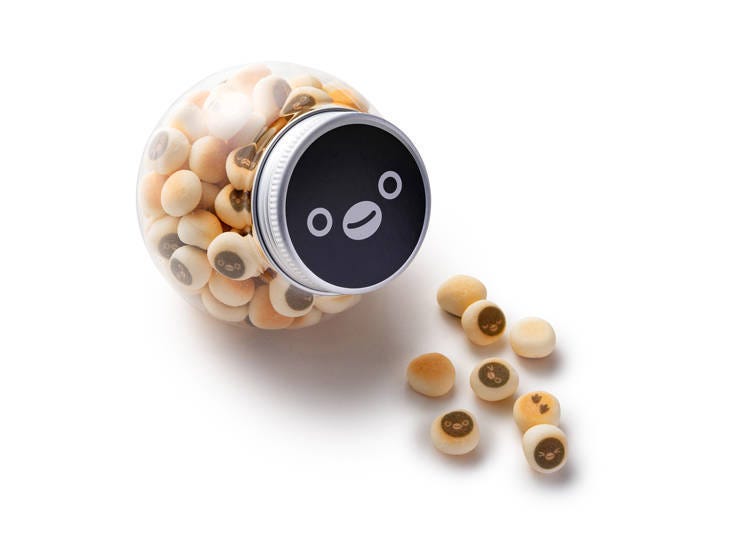 Mamegui also has handkerchief-sized hand towels, and if you choose them with sweets, the staff will wrap them up in a cute way. The limited edition Suica Penguin Bolo is a charming package, and the penguin expressions and footprints on each bolo are different! 648 yen (tax included). 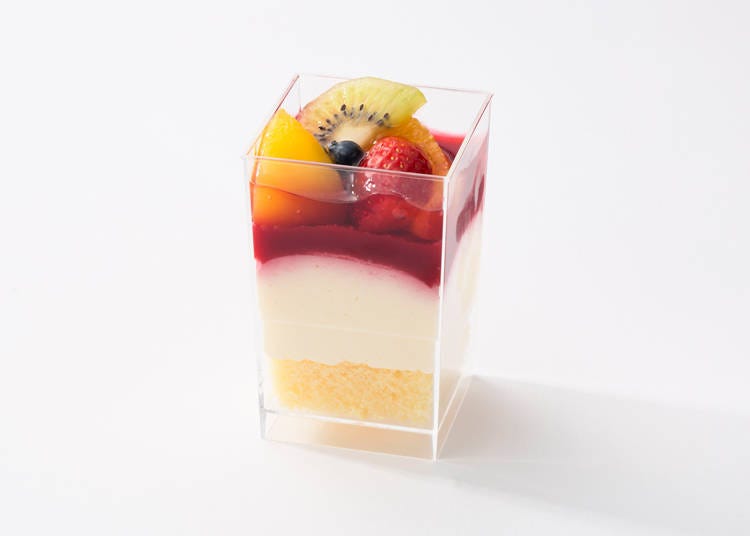 This is the beautiful Fruit Bavarois created by Kyobashi Senbikiya, a fruit specialty store that has been in business for more than 130 years. It is topped with colorful fruit on a fluffy mousse-like Bavarois. 648 yen (tax included). 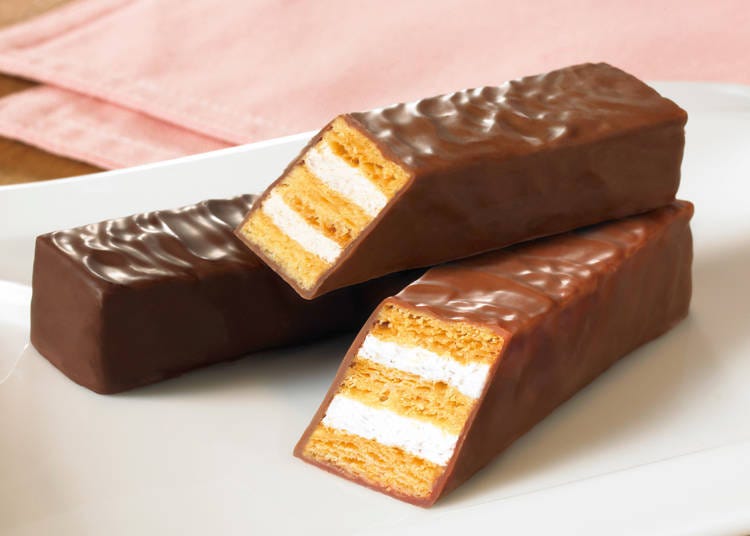 The long-established Western pastry shop Berne was the first in Japan to make mille-feuille coated in chocolate. Crispy pie crusts are sandwiched with cream and then coated with chocolate. This confection is popular both as a Tokyo souvenir and among gourmets. A box of 3 goes for 302 yen (tax included). 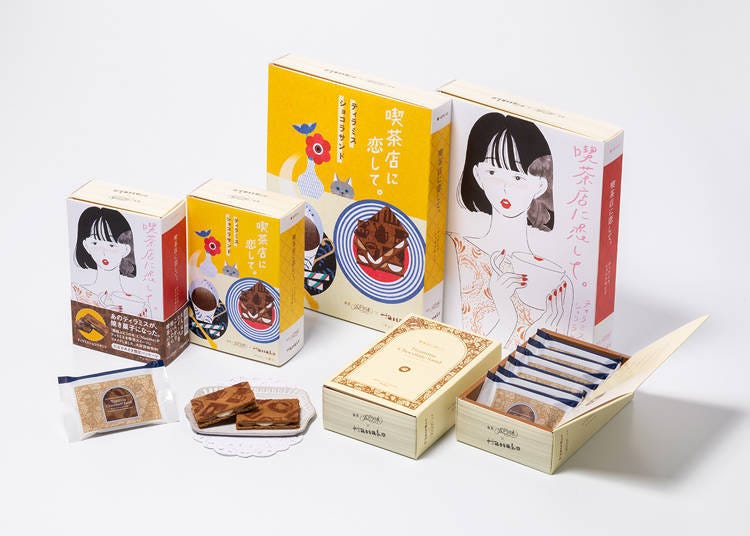 This is a collaboration between the magazine Hanako and the long-established Ginza pastry shop Budo no Ki [Grape Tree]. It is a limited-edition item created especially for GRANSTA. In the package that looks exactly like a paperback there are two kinds of crisp chocolate cookie sandwiches. A box of 6 goes for 788 yen (tax included). 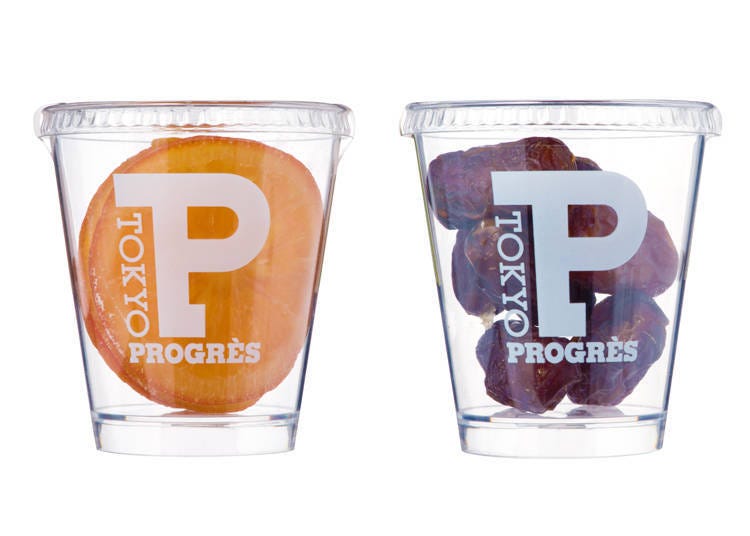 Progrès is a shop specializing in dried fruit. Depending on who the souvenir is for you can select contents to put in this glass made especially for GRANSTA. 540 yen (tax included). 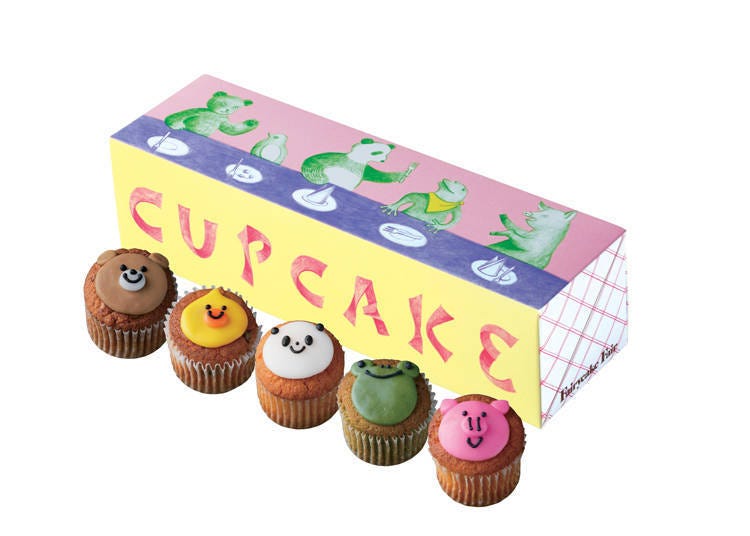 Fairycake Fair is a specialty store that makes cupcakes and biscuits having animal themes one at a time by hand. The most popular is Baked ZOO, an assortment of cupcakes with five flavors decorated with animals. These are fun to look at as well as eat. A box of 5 goes for 1,600 yen (tax included).

You've got to try these Japanese sweets during your stay. The elegant appearance and taste are luxurious and are liked by both men and women, so in Japan they are often chosen as souvenirs because they are suitable for everyone. Here are 6 popular Japanese sweets sold at GRANSTA! 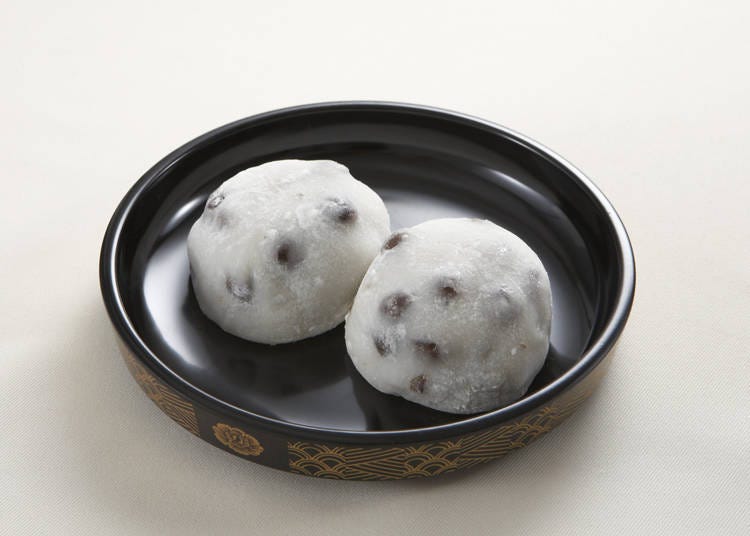 Ginza Kanraku, which has its main store in Ginza, is a Japanese confectionery store that offers seasonal fresh confectionery. Its signature confection is Mame Daifuku made with richly flavorful tsubuan [coarse sweet bean jam] made only with carefully selected small red beans grown by a contracted farm. 206 yen (tax included). 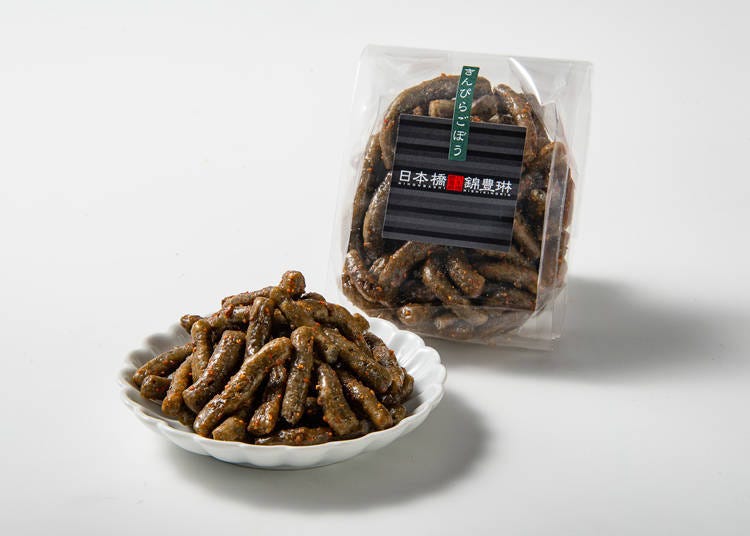 Karinto are fried dough sweets made mainly of wheat. At Nihonbashi Nishikihorin, produced by a long-established confectionery wholesaler, its Karinto is popular because it uses traditional Japanese flavors such as vegetables and purple sweet potatoes. The most popular item is the Kinpira Gobo flavored with kimpira burdock, which is made by adding burdock to the dough. 350 yen (tax included). 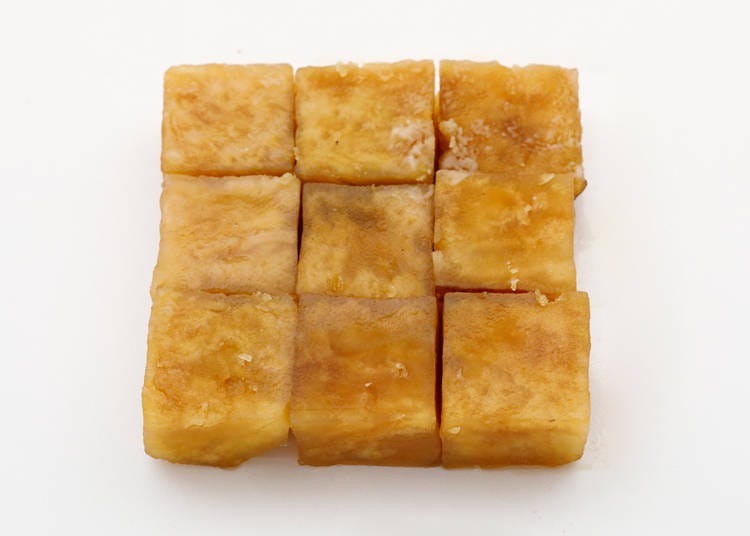 Kurio Shoten has been making "kaku" [squares] in exactly the same way since it was established more than 90 years ago. The high-quality sweet potato Naruto Kintoki is cut into squares, soaked in a long-protected secret molasses recipe and then dried. A box of 9 goes for 756 yen (tax included). 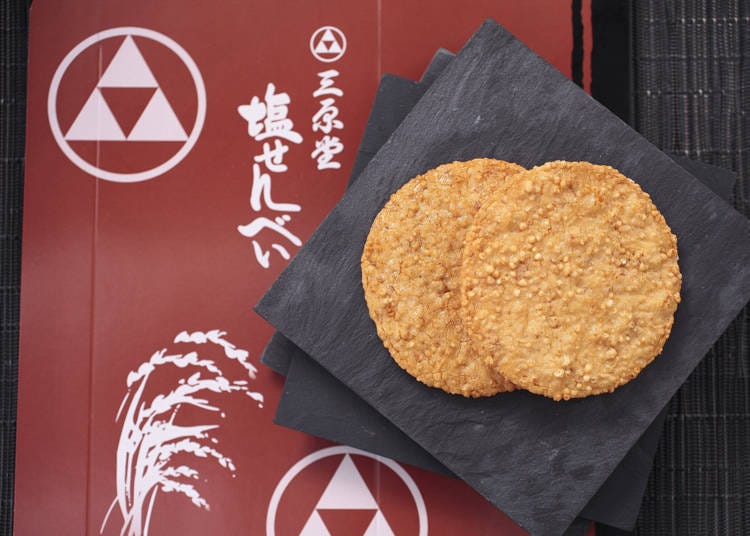 Shio Senbei [salted rice crackers] is a specialty of Miharado, a store established in the Meiji era. These have a natural flavor due to their abundance of minerals and the additive-free and not artificially colored bitter Hakata salt and German rock salt used in their making. A box of 23 goes for 1,080 yen (tax included). 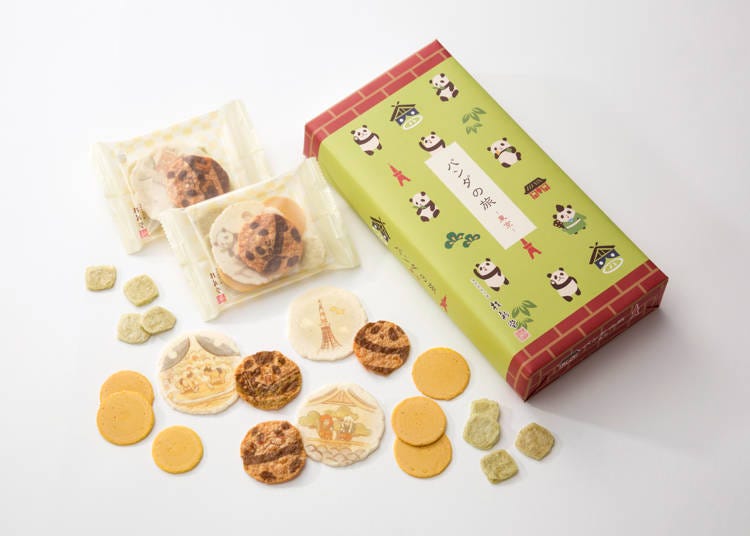 Keishindo, a long-established Nagoya firm, is famous for its ebi sembei [shrimp-flavored rice crackers]. A popular souvenir limited to GRANSTA is the bite-sized shrimp rice cracker featuring pandas, Tokyo Tower, Kaminari-mon and other Tokyo landmarks. The box of 5 costing 1,080 yen (including tax) is the most popular. 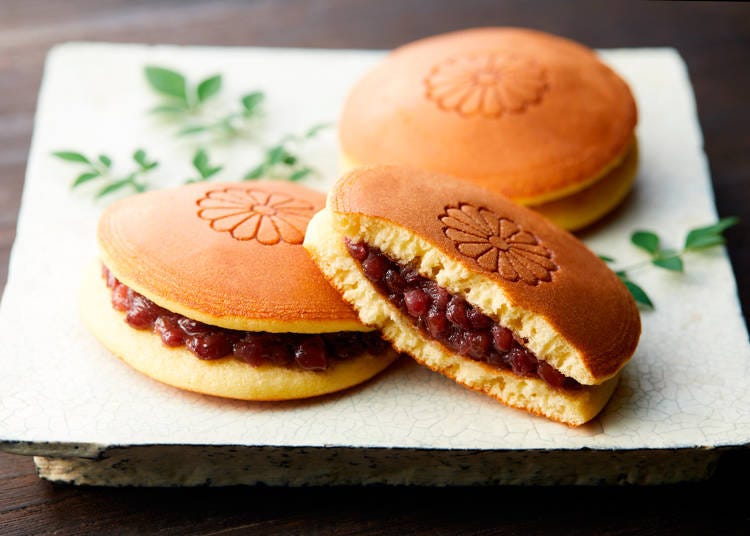 Kusunoki opened in April 2019. Dorayaki is an exquisite treat of high-quality bean jam produced in Tokachi, Hokkaido sandwiched between two fluffy pancakes. The chrysanthemum flower branded on the surface is a design that has been traditionally used on Japanese confections since olden times. 324 yen (tax included) each.

■ A Shinkansen snow globe to remember your trip by 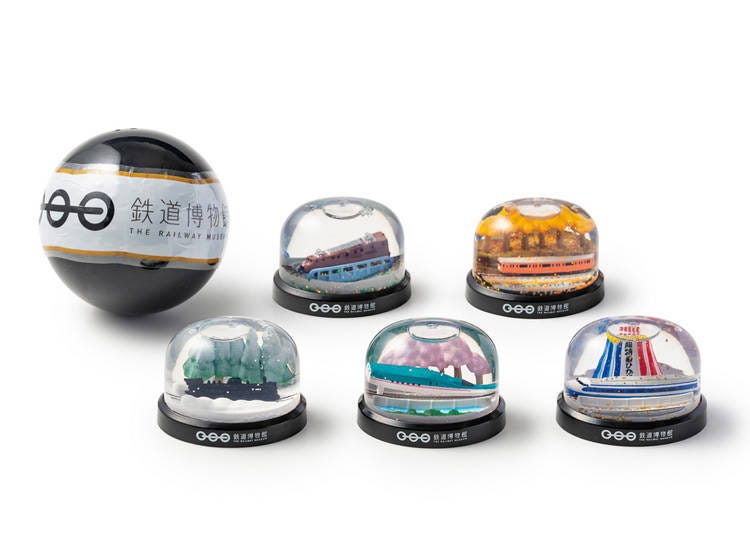 In addition to confectionery souvenirs, this would also make a nice memento of your trip.

The Snow Globe of Trainiart Tokyo, which also sells railway goods, is also popular. This is the perfect Tokyo souvenir because it compactly shows the popular Hayabusa Shinkansen and famous landmarks of Tokyo neatly together! The dome contains sparkling lame “snow”. This is an especially good souvenir to give to railway aficionados and children. 2,017 yen (tax included).

GRANSTA intends to further increase the number of shops going into 2020. Offering a rich selection of various types of souvenirs you will certainly enjoy looking at them. The facility also has a cloakroom, currency exchange service, and duty-free counters making it very convenient for foreign visitors.