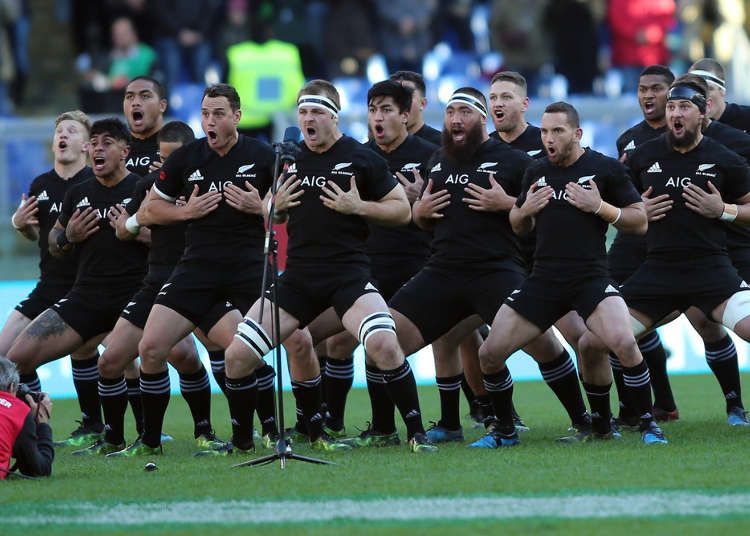 The Rugby World Cup 2019 Is Coming! Here's Some Japan Rugby Union Trivia that will Ensure Your Match Viewing Pleasure

Japan will be hosting the quadrennial Rugby World Cup this year! Ever since the Japan national team defeated rugby union powerhouse South Africa during the 2015 tournament, there's been a steady increase in the number of spectators for the domestic league, but we know some of you out there have never been to a stadium to see a live match before.

And that's why this writer, a huge fan of rugby who has spectated many matches is going to share with you some snippets of information that will make your first rugby match much more interesting! From that famous New Zealand dance to how players spend their time after matches, knowing some of these details will enhance your spectating experience and contribute to your enjoyment. 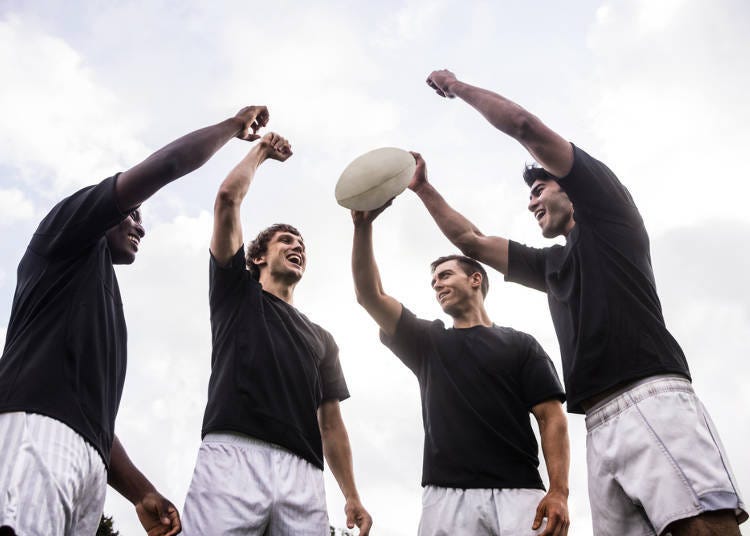 It may come as a surprise to you considering how rough the sport seems, with players charging into each other with all their might, but rugby is also known as the "gentleman's sport". Rugby originated in Britain in the 19th century and was popularized by prestigious universities such as Cambridge and Oxford. In the manga, or Japanese comic entitled "JoJo's Bizarre Adventure", there's even a scene where a British character who was brought up in a noble family, Jonathan Joestar played rugby with another character, Dio during their youth.

The truth is, that gentlemanly tradition can actually be seen from how rugby rules and etiquette are shaped.

Symbolic of a Gentleman's Sport: The Rugby Playing Charter

There is a Rugby Playing Charter that governs the etiquettes of the game. It contains the ethos shared by rugby players and fans all over the world.

The pillars of the Rugby Playing Charter are the core values of integrity, passion, solidarity, discipline and respect. Among these five, integrity is especially defined as being "central to the fabric of the game and is generated through honesty and fair play". There is no preferential order for the five values, but a sport that has "integrity" as one of its core values certainly reflects its gentlemanly origins, doesn't it? 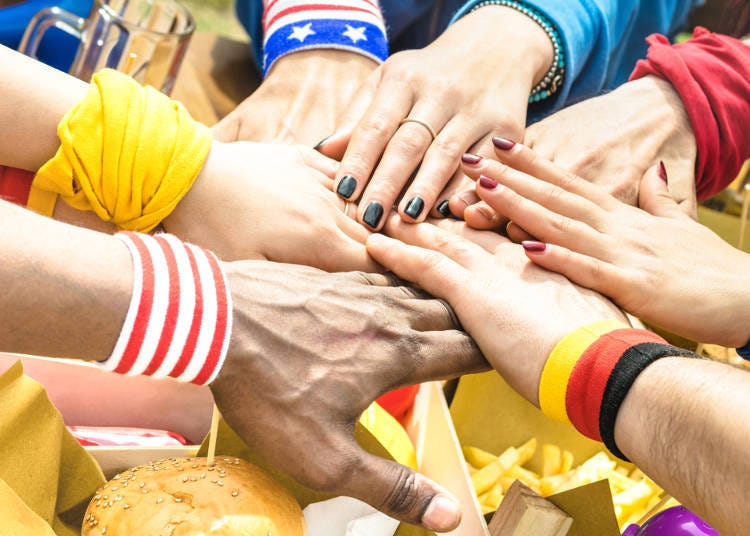 The common theme that runs through the Rugby Charter's core values is a "no-sides" or "full-time" spirit. What it means is that when the ending whistle is blown after full-time is reached, there are no sides - allies or enemies - outside the playing field. In the stadium, both teams share the same shower rooms, spectators aren't segregated based on the team they support, and other little things like those embody the kind of no-sides spirit the sport is trying to encourage.

The most apparent expression of rugby's no-sides spirit would have to be the after-match functions. As its name suggests, this is an event after the match where players from both teams along with related personnel and match referees gather together for interaction. Though they were fierce rivals just a few moments ago, everyone comes together for a hearty meal and to praise each other's performances on the field.

Fans Have Adopted the No-Sides Spirit Too! 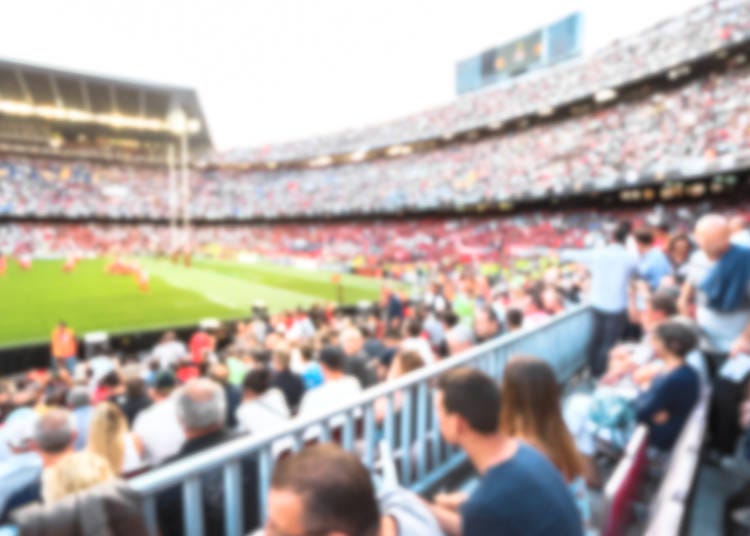 The no-sides spirit is an important value among fans as well. When the opposing team plays well, they are applauded, and jeering of any sort is looked down on. When a goal or conversion kick is being attempted, audiences remain as quiet as possible in order to allow players to have full concentration.

When people think of fervent fans, the hooliganism of soccer crowds often come to mind. Fans of two opposing teams meet on the streets, tempers fly, and things blow up in a split second...right? But supporters of both teams having a good time together shoulder-to-shoulder with a beer or two in a sports bar post-match is the more common sight for rugby. Looks like the fans have found a way to have their own after-match functions too, eh?

Why Isn't the Head Coach on the Bench?

In rugby union, the head coach is in charge of the entire team. The current Japan national team's head coach is New Zealander Jamie Joseph. If you've ever caught video clips of rugby matches on TV, you've probably wondered: Why isn't the rugby head coach on the bench giving instructions?

It's actually an unspoken rule in rugby that instructions during matches are the responsibility of the captain, and no one outside the playing field should be offering advice. That's not to say the head coach is just a passive observer during the match, of course. He'll be using a transceiver to give instructions to other coaches from the spectator stand. 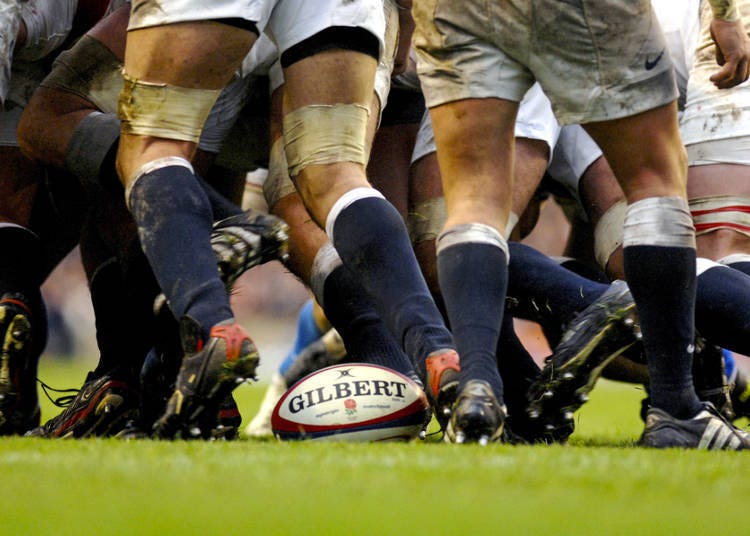 As of April 2019, the top 10 teams for rugby are, in descending order: New Zealand in first place, followed by Wales, Ireland, England, South Africa, Australia, Scotland, France, Fiji, Argentina, and then Japan in 11th place.

Many of these countries have distinctive traditional characteristics.

The teams mentioned above all have their own nicknames that reflect their national identity. For example, Japan's national team is nicknamed Brave Blossoms after sakura, or cherry blossoms. Here are some of the more well-known nicknames of other teams.

The New Zealand team's nickname is widely known in Japan as well. When they visit Japan, sports papers will often use the "All Blacks" moniker in their headlines. 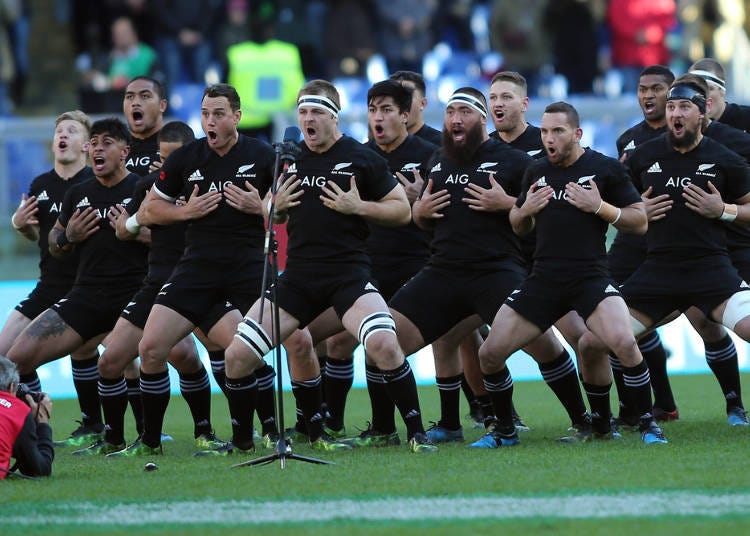 Splendid skills aren't the only things fans find mesmerizing about rugby union world number one New Zealand. The Haka dance that they perform before each match is quite something too!

Haka is a traditional challenge dance of the Maori, the indigenous people of New Zealand. It was performed before tribal battles to bolster morale. Heavy feet stomping and loud cries of phrases such as "Ka Mate (I may die)" and "Ka Ora (I may live)" leave lasting impressions on those who witness such displays. When performed in front of an opponent's team, it adds to the tension of the match that is about to begin.

Dances like Haka are called "war cries", and other national teams such as Fiji (Cibi), Tonga (Sipi Tau), and Samoa (Siva Tau) have their own dances as well.

England's rugby anthem "Swing Low" is also well-known among rugby fans. The original title of the song is "Swing Low, Sweet Chariot", and this song was popular among the blacks in the United States during the 19th century. There are many theories about how the song came to become the anthem of England's national rugby team, but regardless of the reason, the fact is that when everyone starts singing the song in unison during the team's matches, it raises the players' spirits and boosts their morales by leaps and bounds.

What to Bring and Wear for Your First Match? 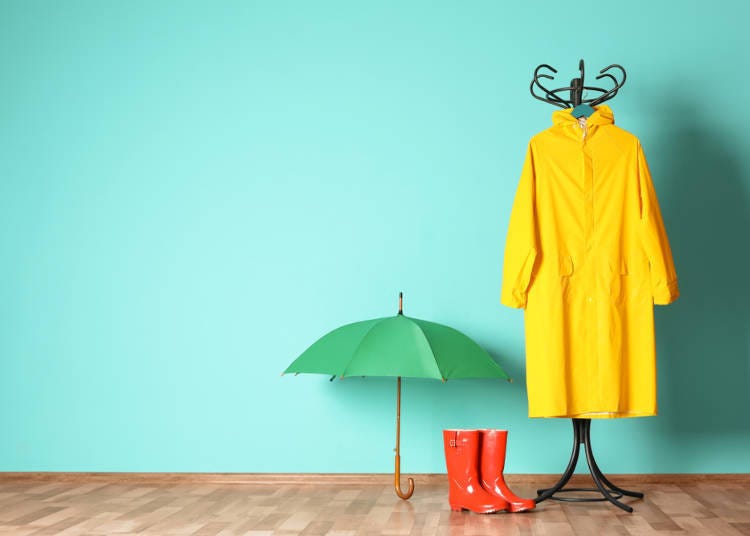 The Rugby World Cup 2019 will be held in Japan from September to November this year. If you arrive about an hour before the match begins, you'll be spending about three hours in the stadium, including match time. Rugby games take place outdoors. Some stadiums have roofs, but just in case, be sure to bring something for unexpected rain and cold weather.

Specifically, items like a raincoat, windproof jacket, muffler, and a pair of gloves will be helpful. Your knees can get rather cold if you're sitting all the time, so we also recommend bringing along a flannel blanket to deal with that, especially for the ladies!

Bringing along a foldable floor pillow or cushion will help you last longer on the hard and utilitarian stadium seats. Since rugby is a sport where players often gather together at one particular spot, a pair of opera glasses or theater binoculars will ensure that you always have an eye on the action.

It may be a good idea to keep a minimal amount of biscuits or nutritional supplements on hand as well, and definitely don't forget to bring enough drinking water!