HOME Tokyo and Surroundings Tokyo Tokyo Station The Rugby World Cup 2019 Is Nigh! A Guide to Japanese Union Rugby for Beginners 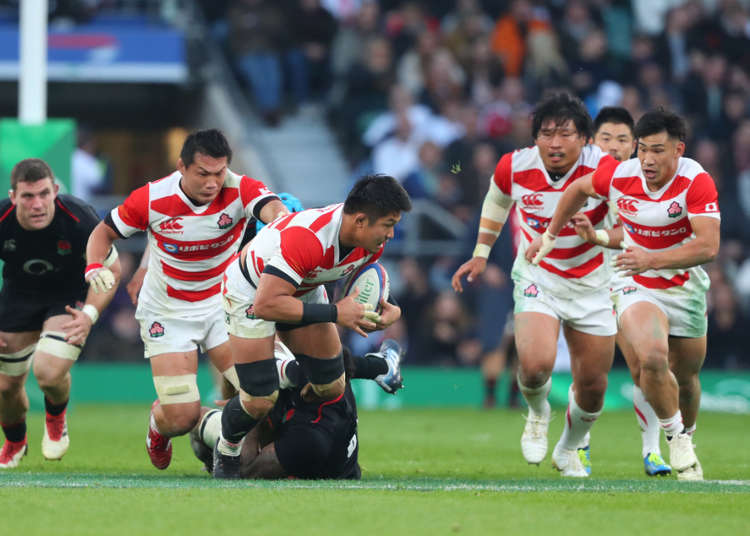 The Rugby World Cup 2019 Is Nigh! A Guide to Japanese Union Rugby for Beginners

When the Japanese union rugby team defeated powerhouse South Africa during the 2015 Rugby World Cup, a rugby fever swept through the entirety of Japan. This writer has been a fervent fan of the sport ever since that fateful day as well. Spectator count for the 2015-2016 season saw a new peak record and the sport continues to be hugely popular among the Japanese today. And this year of 2019, the quadrennial Rugby World Cup tournament will be held right here in Japan!

Rugby is a ball game with as much history and popularity as sports like baseball and soccer. The professional league and college tournaments are where most of the sport's enthusiastic fans gather to show their support.

In this article, this writer, who is, as mentioned, a hardcore fan of rugby with plenty of experience in spectating will be sharing with you more information about the sport's history, major venues, the Japanese national team, and players to pay close attention to. The article will also cover the basic rules of the game, what positions there are, and what constitutes a goal - all laid out in an easy-to-understand format that will help even absolute beginners be able to enjoy the sport as they spectate.

100 Years of Rugby in Japan 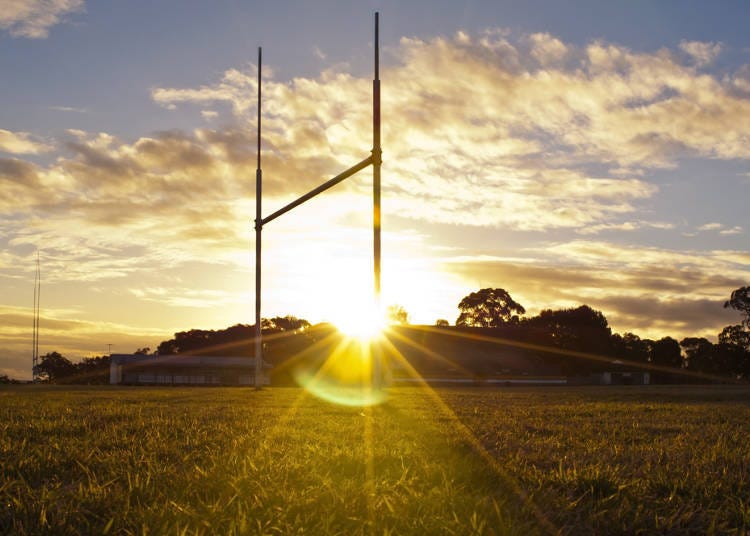 During the time period when there were no professional or company sports yet, Japan's sports fans turned to college sports to scratch their itch. Western sports were introduced by Western teachers and specialists (and later their offspring) who had been invited to Japan during the Meiji era (1868 to 1912), and they naturally found a home in the colleges these ones worked in. Rugby was one of those sports. It was introduced by Clark, an English teacher from Great Britain, who taught the sport to his students. Twenty-seven years after he laid that foundation, the Japan Rugby Football Union was born.

Tokyo's Keio University, Waseda University, Meiji University, and Kyoto's Doshisha University are historically known for being strong rugby competitors, and many athletes from the Japanese national team hailed from these university teams. Any match that pit two of these four major college teams against each other was a highly-anticipated event by fans of the sport, both in times past and recent years.

The premier rugby league in Japan, Japan Top League, started in the year 2003 after the Adult League and Regional Leagues were merged. Right now, there are 16 teams from all over the country enrolled in the league.

Chichibunomiya, Hanazono, and Other Major Rugby Venues of Japan 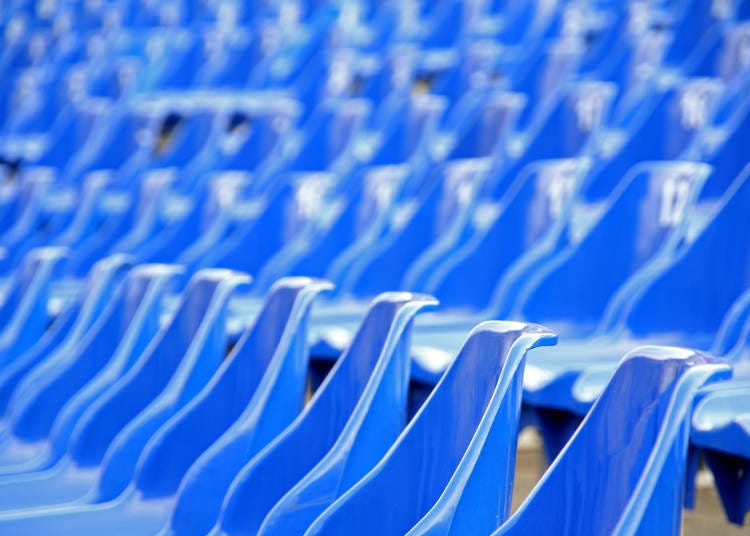 There are two long-established major rugby union sporting venues in Japan, also known as "Japan's Rugby Sanctuaries". One of it is the Chichibunomiya Rugby Stadium in Tokyo that was built in 1947, and the other is Osaka's Hanazono Rugby Stadium, built in 1929. Both stadiums feature an exclusive rugby playing field - an uncommon sight for stadiums in Japan - where exciting clashes between strong teams can often be witnessed.

A new "sanctuary" for the sport may well be on its way to being recognized - the Kamaishi Recovery Memorial Stadium that opened in 2018. Located in Iwate Prefecture's Kamaishi City, known as a "rugby city" because it is home base to a top-class rugby union football team, this is also an area that had been devastated by the 2011 Tohoku Earthquake. The new stadium is built on top of the site of an elementary school that was destroyed during the earthquake, and also serves as a facility to remember the history of that disaster. 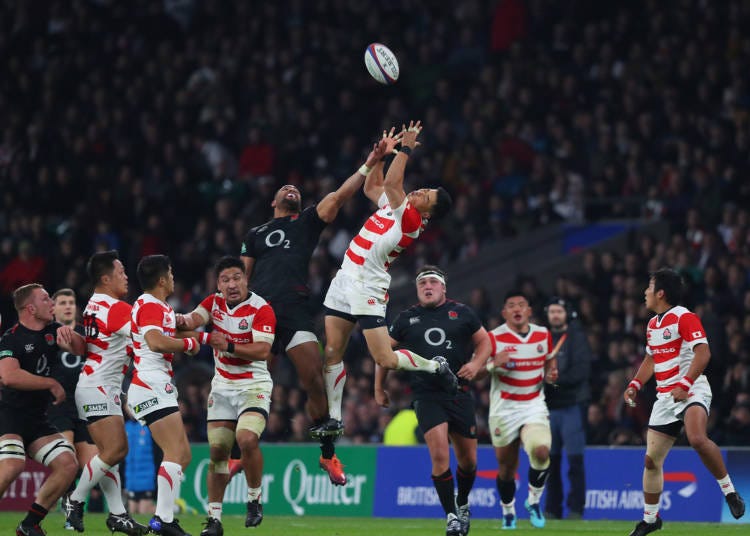 The men's Japan national rugby team is the team that represents Japan on the world stage, competing against other countries in international tournaments with each other's national prestige at stake. Each time, more than 30 active players in the Top League are recruited for the squad, and 23 athletes from this squad are eventually picked for the national team.

As of April 2019, Japan's rugby team is the top rugby team in the Asia region, with a world ranking of 11th place. The team's nickname is "The Brave Blossoms" and their uniform features red and white horizontal stripes with an emblem patterned after the sakura, or cherry blossom flower. Their current head coach is Jamie Joseph, a New Zealander who was formerly a Japan national rugby team player himself.

The Japan national team has qualified for the Rugby World Cup ever since its inception in 1987, with a career statistics of 4 wins, 22 losses, 2 draws. Three of those wins were during the 2015 World Cup, when the Goromaru Boom - named after fullback Ayumu Goromaru for his instrumental roles in the victories, exploded in Japan, especially when Japan defeated South Africa in a game widely described as "the greatest upset in the history of rugby union", leaving powerful impressions behind on people's minds.

Rugby powerhouse countries like New Zealand, Wales, England, and South Africa have players that are physically stronger than Japan's players. Trying to break into the top 10 international ranking of any sports is said to be exponentially challenging, and Team Japan is constantly tackling this difficult hurdle while thinking of ways to defeat teams with taller and heavier players than its own team.

There can be significant differences in team strategies depending on who the head coach is. For example, former Japan head coach Eddie Jones relied on a variety of momentum passes to creep forward with much effort. In contrast, current head coach Joseph prefers to cut deep into enemy territory with long kicks and avoid as much body contact as possible. 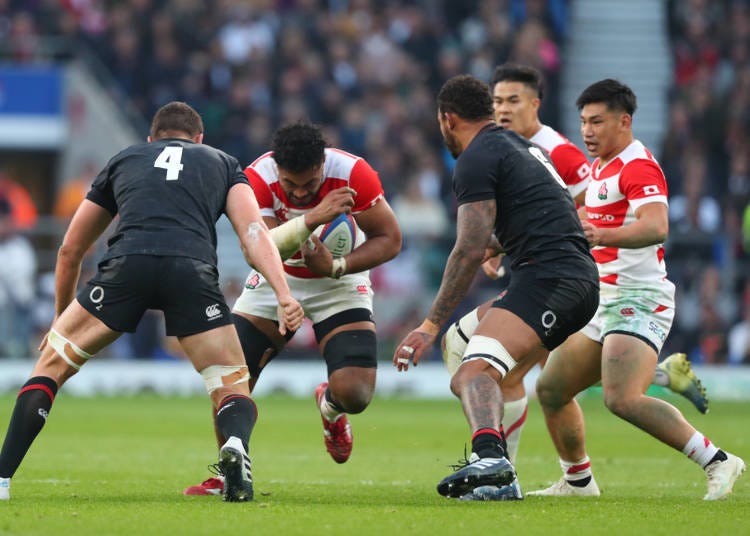 The International Rugby Football Board allows foreign-born players to represent countries they do not hold citizenship for. This may seem unusual if you're not familiar with rugby, but even major teams like England and Australia often draft foreign players into their ranks.

There are conditions, of course. For example, the foreign-born player must have lived for a certain time in the country they intend to represent, and they must not have represented any other countries in the sport before. One of Team Japan's legends came from New Zealand when he was only 23, and represented Japan for a total of 64 matches. The strength and experience of these foreign-born talents have grown to become indispensable assets of Japan's national team.

The load Japanese and foreign-born athletes have to bear in rugby is the same. After all, rugby is by nature a grueling sport where players clash into each other during scrums, and the road to victory is paved by large and powerful men breaking down the other team's iron-clad defenses with fearless charging. Of course, that's also a major part of what makes the sport exciting to fans and spectators in the first place! 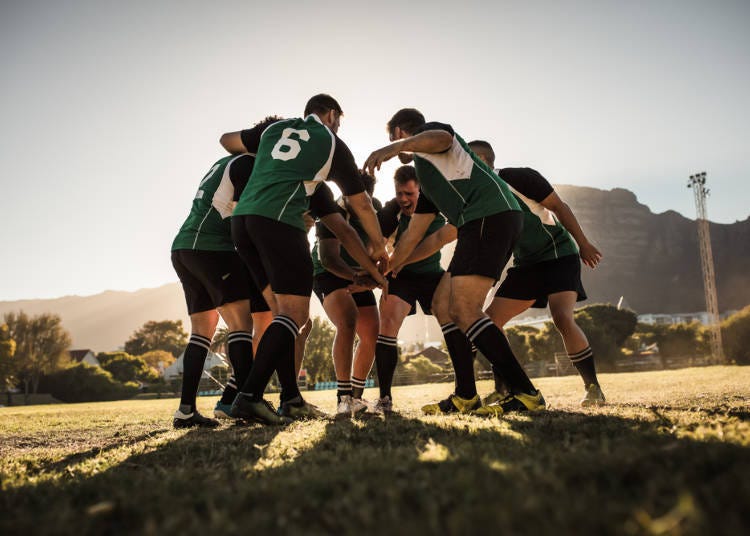 The list of handsome and ruddy rugby players includes old-timers such as Seiji Hirao and more recently, Ayumu Goromaru. What's more, the current Brave Blossoms team has been touted as the best-looking Japan national team since its inception.

Especially popular among this team of good-looking athletes are Kenki Fukuoka, Yu Tamura, Ryoto Nakamura, Kazuki Himeno, and Rikiya Matsuda. Let's also not forget Samoan-born Timothy Lafaele, a fine-looking gentleman whom many have even compared to the likes of - believe it or not - Keanu Reeves!

12 Super Fundamental Rules You Should Know Before Spectating 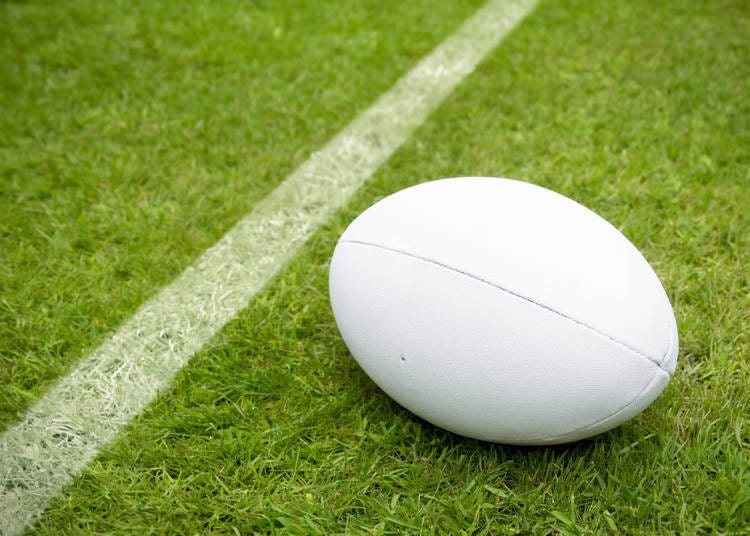 Basic Rules
1) Each team has 15 players. They are generally split into eight forwards and seven backs.
2) Both teams face each other at the start of the match, and the goal is to bring the ball into enemy territory.
3) Running with the ball is allowed.
4) The match is split into two halves of 40 minutes each, totaling 80 minutes.


Scoring
5) There are four ways to score: Try, conversion, penalty, and drop goal.
6) Try: Grounding the ball in the in-goal area earns the team five points.
7) Conversion: After scoring a try, kicking the ball between the goalposts earns the team two more points.
8) Penalty: When the opponent makes a rule infringement, for example, by executing a dangerous tackle, the other team can choose to kick the goal and score three points if successful.
9) Drop goal: Players can also score three points by dropping the ball onto the ground during play and kicking it into the goal on the half-volley.


Rule Violations
10) Knock-on: When a player makes contact with the ball and the ball goes forward.
11) Throw forward: Passing the ball to a teammate in front.
12) For minor offences like knock-on and throw forward, the sanction is a scrum. In a scrum, the forwards of both teams face each other to restart play with a contest for ball possession.

Keep these rules at the back of your mind while watching your first rugby union match for maximum enjoyment, and let's all support the Japan rugby union team together!