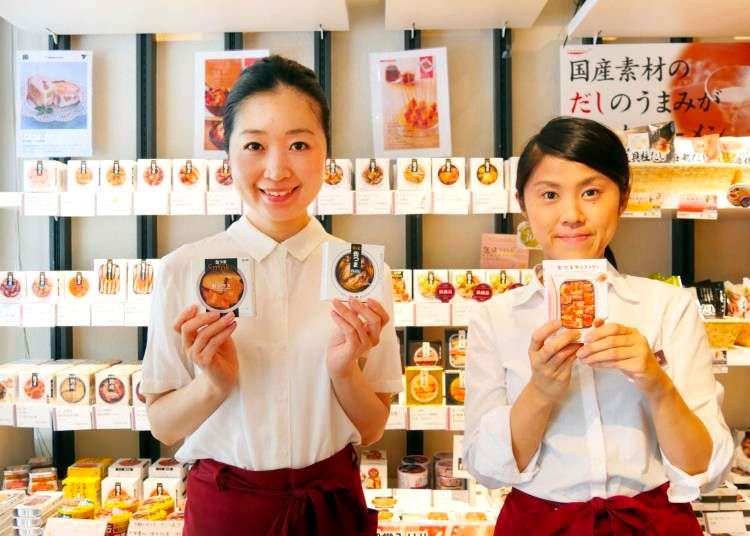 Japan is a country that seemingly prides itself on its eccentricity. With countless numbers of fanatical subcultures, if you can imagine it, it most likely exists in some form here. It should come as little surprise then that one of the latest crazes to hit the Japanese foodie scene is gourmet canned foods. When most people think of canned goods, they instinctively picture tuna fish or sardines sitting unused in kitchen cabinets around the world. Japan however has turned this concept on its head; canning everything from loaves of bread to $100 sea urchin. Taking the concept even further, canned food bars and restaurants have been on the rise throughout the country; finding everything from drinks to appetizers served exclusively in cans! 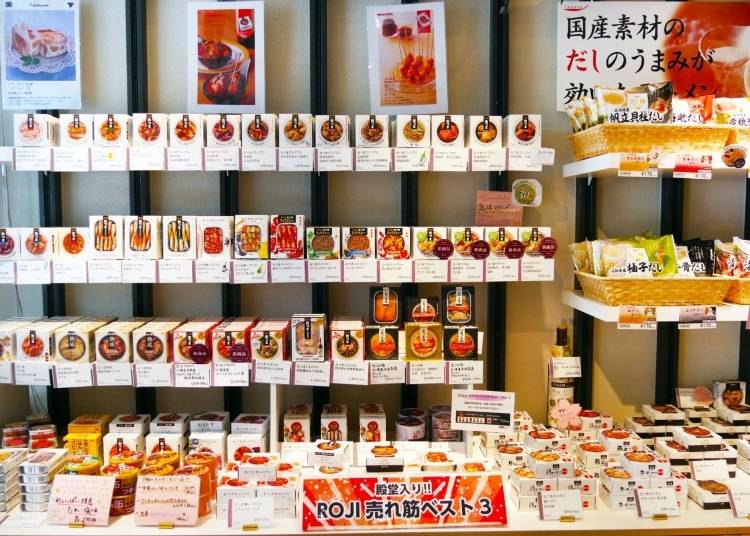 Some of the 70+ canned item selection available at Roji Nihonbashi

One of the leading luxury canned food brands in Japan is K&K. They are manufactured by Kokubu Group Corp., a company founded over 300 years ago in 1712. With the canned food craze continuing to grow in popularity, we’ve chosen five K&K canned products to review. Unlike the canned foods many westerners are familiar with, these are meant to be eaten as is or simply heated and enjoyed. And at around $5 each, these cans not only make an excellent snack (or otsumami in Japanese) when paired with a beer or glass of wine, but are a unique souvenir for friends and family back home as well! 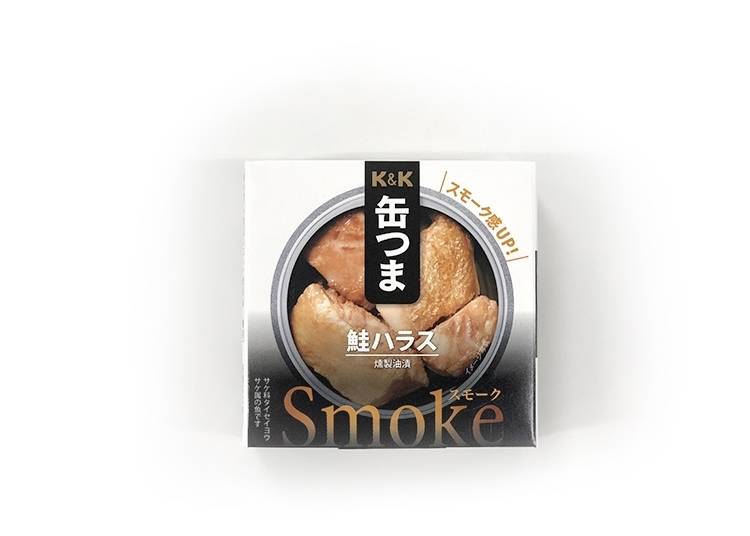 Our first canned food is a unique twist on a classic: smoked salmon belly. The first detail that caught my eye was the use of sakura wood. Salmon is typically smoked with alder wood, but sakura is such a distinctly Japanese element that it warranted being our first pick. Rather than the thin strips of smoked salmon filet that is often found in delis and grocery stores across the United States, K&K has chosen to use the salmon belly; the fattiest and therefore most flavorful part of the fish. The smoked salmon bellies are served in small, bite-sized nuggets, making it ideal for a standalone snack. 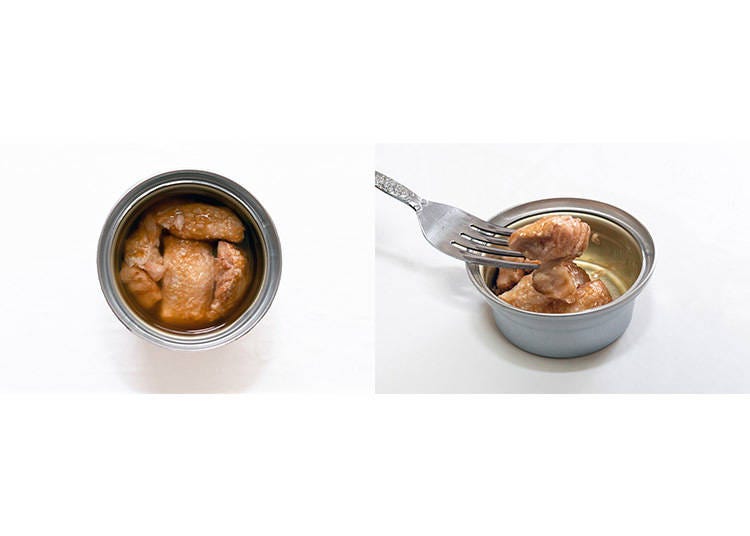 The Taste Test
I was immediately struck by how tender and moist the fish was. As someone whose canned fish experience had been previously limited to dry tuna fish, I was surprised by how similar the texture was to a medium cooked salmon filet. The oils from the fattier cut of fish truly help to preserve the freshness.

The aroma upon opening the can was quite smoky (as to be expected), but the flavor was surprisingly mild. The fish itself tasted very rich with just a hint of smoky finish. The subtlety of the sakura smoke would appeal to both smoked salmon enthusiasts as well as first time eaters alike. I personally preferred this cut of fish over the traditionally thinly-sliced smoked salmon as it feels more like something you could eat on its own rather than as an accompaniment to another food. 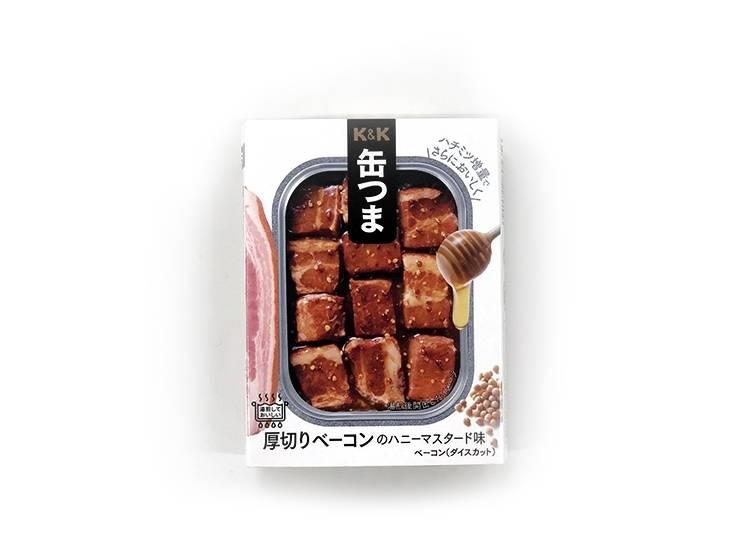 Our next can features thick-cut bacon pieces in honey mustard. Rather than the bright yellow sauce most of us have become accustomed to, this version uses honey mixed with whole mustard seeds. Incorporating the earthiness of the mustard seeds but without the vinegary bite of yellow mustard, the complex sweetness of the sauce pairs well to the bacon’s saltiness. 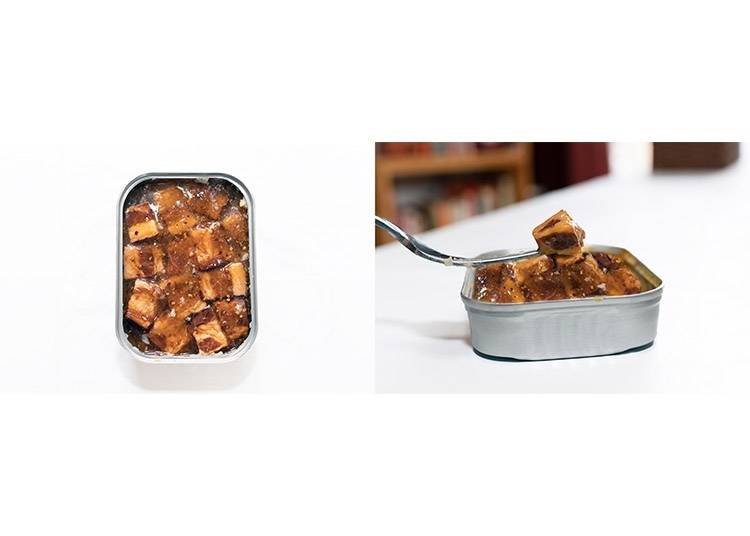 The Taste Test
As someone who personally believes bacon and honey mustard each deserve their own spots amongst the food pyramid, I was excited to dig in. I love thick cut bacon, but these pieces are served so thick that the texture is more reminiscent of ham. It’s ready to eat straight out of the can, but a quick pan fry would go a long way in providing some of that signature bacon crispiness. While I appreciated the mature take on honey mustard, a part of me missed that nostalgic taste I’ve come to know and love. That being said, the saltiness of the bacon really helped to cut through the honey’s sweetness; the result of which was a very well-balanced smokey and sweet flavor. 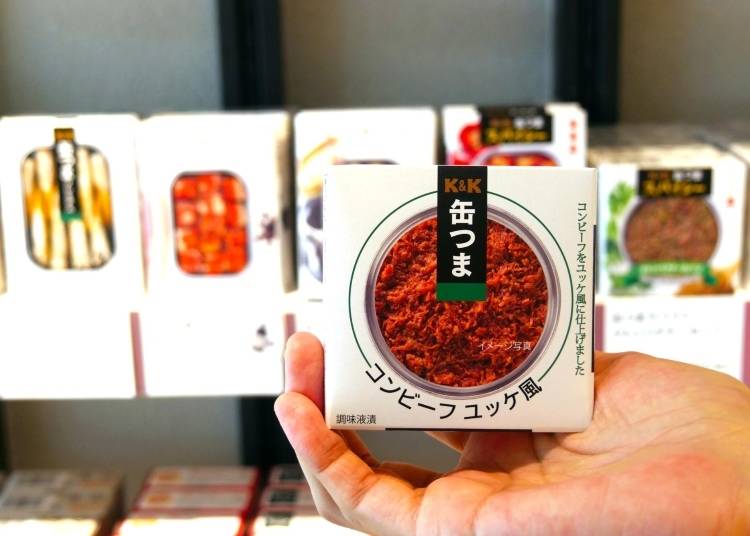 For many in the United States, corned beef is a food that makes only one appearance per year; on Saint Patrick’s Day. Despite its lack of popularity as a mainstream food, this slowly simmered meat is incredibly tender and versatile enough to serve as everything from an entree at dinner to a pate-like spread on a cracker. It’s not something that often shows up on restaurant menus, but when served in an easily-accessible can, it can be enjoyed at any time of year. K&K’s version is flavored with sesame oil, adding a bit of Asian flair to this typically western dish. 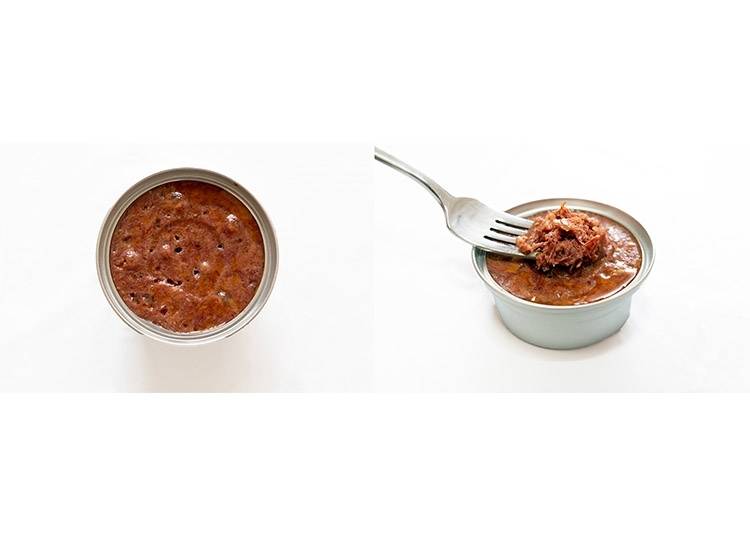 The Taste Test
Straight out of the can, I found the texture to be a bit confusing. In appearance, it was smooth like a paste, but still felt a bit stringy in the mouth. On the plus side, the stringiness indicates that it is indeed made from finely cut corned beef and not some sort of highly processed substitute. The flavor of this one had a much more apparent smokiness to it than the first two canned foods we sampled; so much so to the point where the casual everyday eater probably would not enjoy more than a few bites. The sesame oil used to flavor it added to its overall rich taste as well. Once heated in a frying pan for a couple minutes however, the texture became much smoother and the taste more balanced. 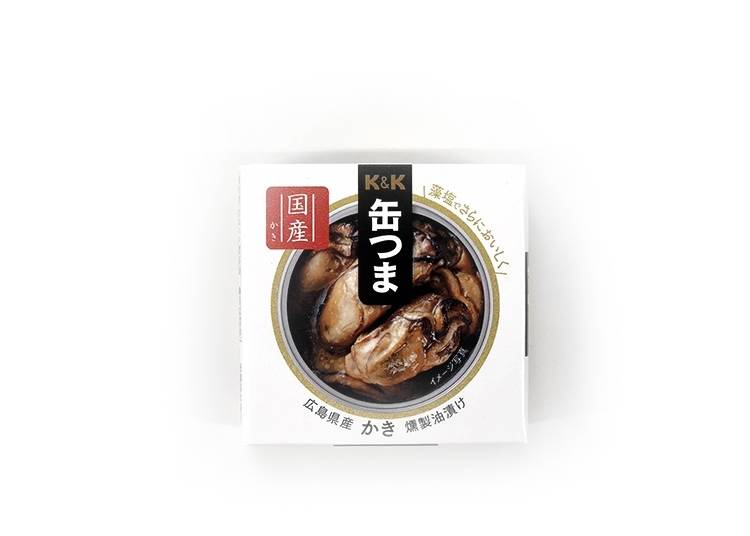 As the largest oyster producing prefecture in all of Japan, Hiroshima’s oysters are renowned for their quality and excellent flavor. While most people are familiar with raw oysters served on the halfshell, these K&K canned oysters have been smoked, leading to a firmer texture while still managing to lock in a great deal of moisture. During the smoking process (using signature sakura chips), dried seaweed salt is added to the oysters, creating a unique, umami brine. The combination of the smoky flavor with the signature briney finish of oysters makes for an experience reminiscent of a beachside cookout. 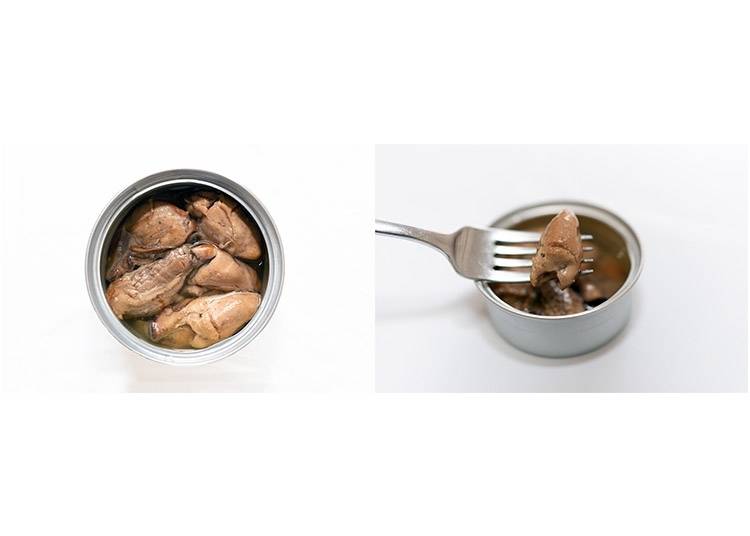 The Taste Test
As I had never tried smoked oysters, I was not sure what to expect as far as texture and appearance when first opening the can. What I found was something similar to steamed clams; a food I was very familiar with having grown up in New England. As someone who is not typically a fan of raw oysters’ slimy texture, this was a welcome change for me. Despite its firmer mouthfeel, preparing the oysters via smoker seals in all of the moisture, resulting in an almost creamy texture while eating. The flavor was quite mild overall, with the brininess of the oyster balancing well with the smokey notes. The can contained 7 oysters, which seemed a generous amount given the low price tag.

Can #5: Beef Simmered in Red Wine 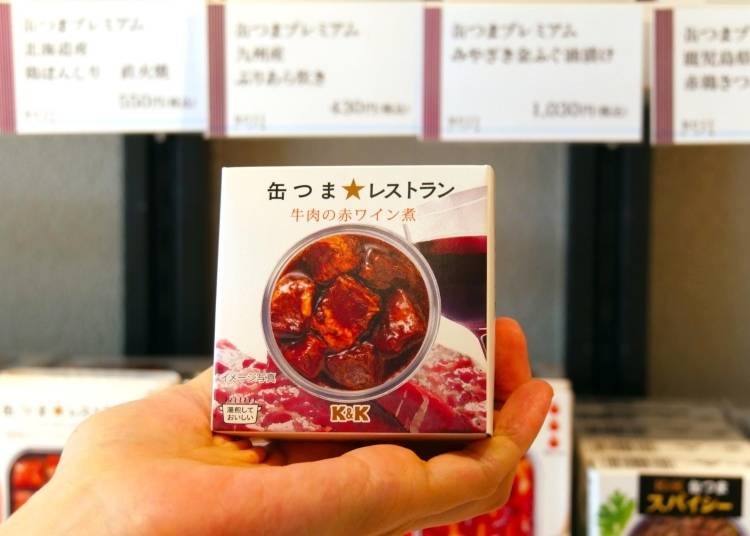 As any food connoisseur will tell you, beef pairs beautifully with red wine. Our final canned food has opted to cut out the middleman and simmer the beef directly in red wine with carrots and onions. The end result is thick, well-marbled pieces of beef infused with flavors of earthy notes and dark red fruits. When heated, this works well as an appetizer on its own or as part of a larger meal. 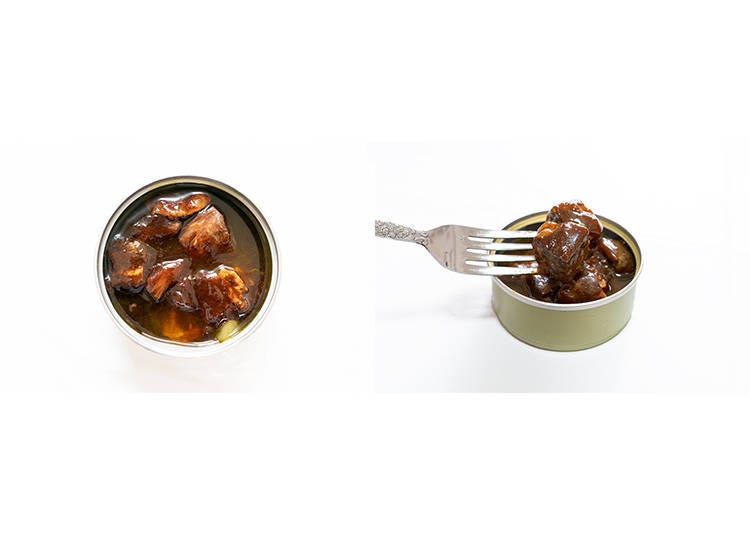 The Taste Test
Much like the bacon I tasted earlier, the texture straight out of the can is quite soft. Served at room temperature, the marbling on the beef has a somewhat gelatinous texture, which does not make for a pleasant eating experience. That being said, I think most people would assume that beef is meant to be heated before eating, and doing so makes for a world of difference. After a few minutes in a frying pan, the beef has just enough firmness to feel like a proper medium rare to medium steak. The red wine marinade ensures that the beef stays juicy throughout heating and serves as a delicious pan sauce once ready to eat. This is a canned good I believe everyone could benefit from having in their kitchen as it takes very little effort to put together a simple yet wholly satisfying meal. 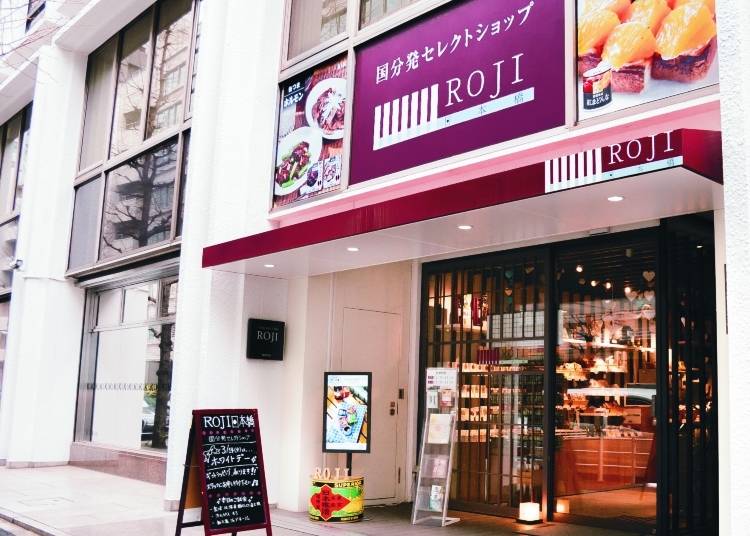 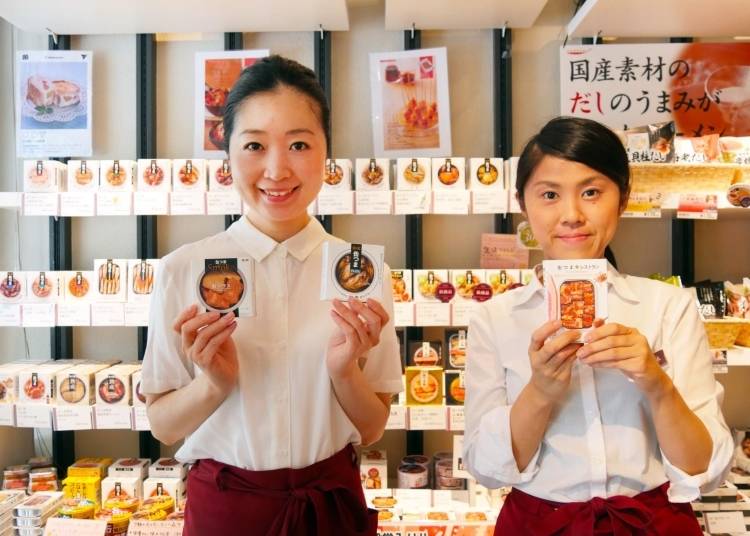 On the whole, I was pleasantly surprised from our K&K canned food taste test. Canned foods typically have a dim reputation as being somewhat bland, flavorless, last resort meal options; but this is clearly no longer the case. The recent wave of canned food mania in Japan has pushed manufacturers to step up their game and become truly competitive in their offerings. With over 70 different options available in their canned goods lineup, there is guaranteed to something that you’ll love. When you’re ready to take part in the canned food craze, head over to Roji Nihonbashi and pick up some cans for yourself and friends!

*Contents and packaging for certain products were updated on August 20, 2018 and may appear differently from what is presented in this article. 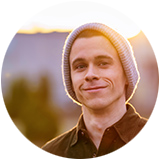