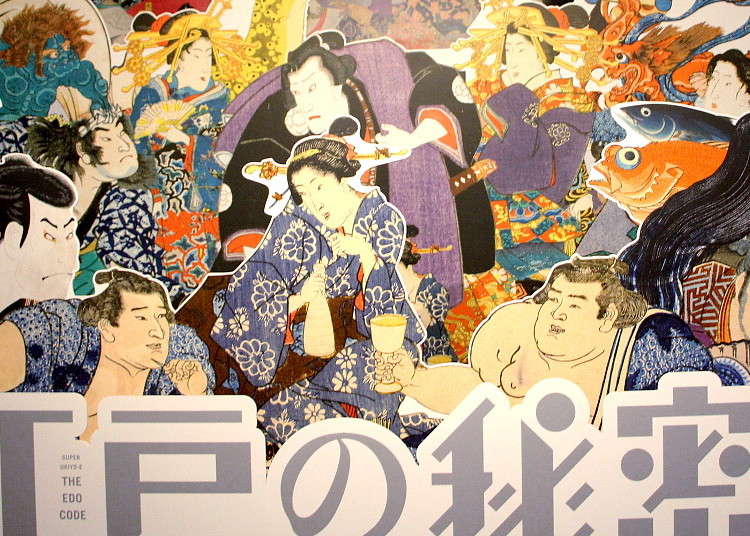 When talking ukiyo-e, there are certain keywords that always seem to be floating around and even those people who no idea what ukiyo-e is or means are likely to have heard at least one of them: Hokusai, the Great Wave off Kanagawa, Japanese wood block printing, and so on. This art style translates to the enigmatic name of “pictures of the floating world” and, with its vivid colors and diverse themes, seems to be the perfect representative of the Edo period, the Old Japan of geisha and samurai.
I have to admit, when first hearing the term “Super Ukiyo-e,” I wasn’t too excited. Sure enough, I like art and I particularly like Japanese ukiyo-e, but by now, I have seen my fair share of beautiful ukiyo-e works – back then, I had no idea that I was about to step into an entirely new and enigmatic world of art.

What is Super Ukiyo-e? The Basics of the Edo Code 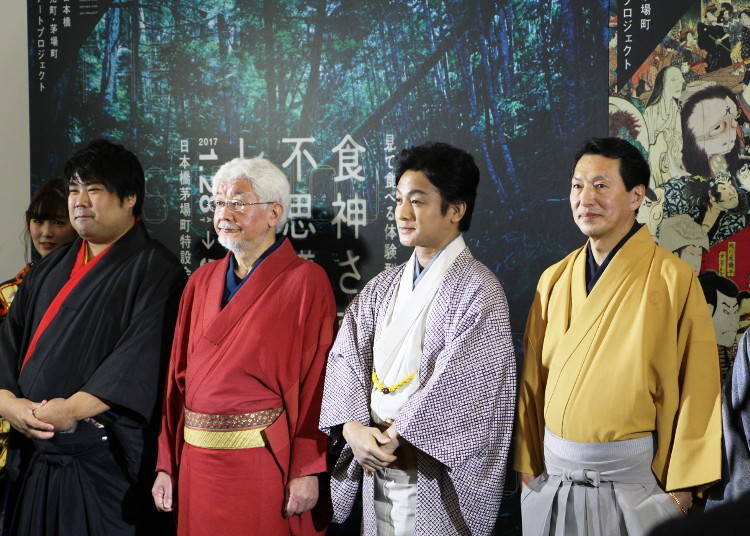 Let’s cover the basics first: what is Super Ukiyo-e, the Edo Code? It is an art exhibition with a mission to discover the secrets of old Edo, doing so by digitalizing the nation’s most famous ukiyo-e works and infusing them with 21st-century state of the art animation techniques. The exhibition is split into four main categories: Nihonbashi, a part of Tokyo that was an important center of commerce and traffic back in Edo; Women’s Fashion, illustrating the beautiful garments of Edo’s geisha and working women; Ikemen, which translates to “handsome guys” and showcases the ukiyo-e that illustrated kabuki actors, the pop stars of old Edo. Think of those as the Edo version of the posters from Tiger Beat. Last but not least, there’s the Bakemono category, which was among my favorites. Bakemono means monster, that’s all I am going to say for now!

But even knowing what the exhibition Super Ukiyo-e is about, I still had trouble understanding how this traditional wood printing and modern computer techniques are supposed to harmonize. And indeed, reflecting upon my impressions of the unique experience, it is somewhat hard to put the fascination I felt in words. Ukiyo-e and digital art are centuries apart, and yet they complement each other in such a perfect way that it is hard to believe the one wasn’t explicitly made for the other. Take a look: 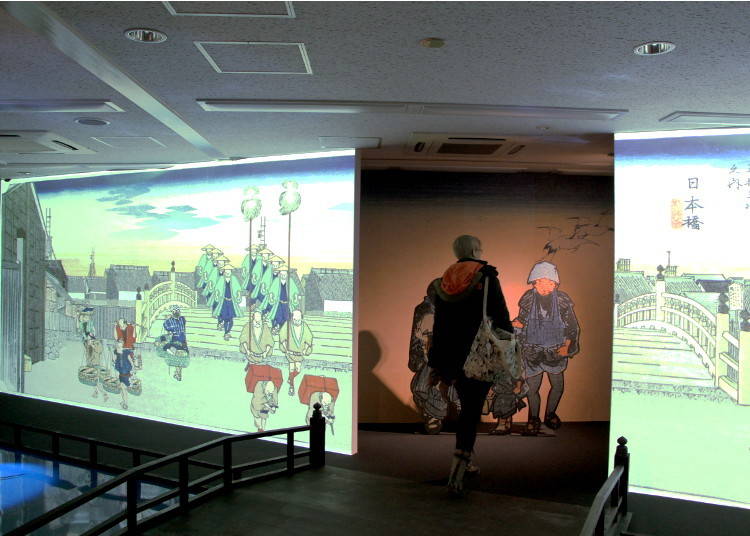 After attending the press conference that accompanied the opening day of Super Ukiyo-e and learning more about the people behind this amazing exhibition – the atmospheric and explanatory comments of the installations are all done by Ainosuke Kataoka, one of Japan’s most famous kabuki stars – I was anxious to get a taste of the real deal. After a brief elevator ride with other equally excited ukiyo-e enthusiasts and passing the large poster at the entrance, I found myself standing right in the middle of the first category, Nihonbashi – quite literally. While the original wood block print works hung on one wall, to be admired in their unedited beauty, the artists of Super Ukiyo-e had dissected the prints in their own way. What may sound cruel to the work at first turned out to be a breathtaking experience: the people of Edo, once tiny prints on paper, now stood to my left and right, as big as me, in all their colorful splendor. Not only were the unique parts of the ukiyo-e used as 3D-props, so was the ukiyo-e itself. A large wooden bridge spanned the room with the Nihonbashi scenery of the print stretching to its left and right via large screens, allowing me to take a walk right through the timeless masterpiece!

Lively ukiyo-e koi frolicked in the digital water below me, and I could hear the chatter and gossip of the wood block people brought to life via atmospheric sounds and recordings. Not only I was moving, however, so was the procession of people about to cross Nihonbashi, the famous bridge. On the original ukiyo-e, they’re frozen in their movement forever, but we are talking Super Ukiyo-e here and enhanced by digital art, the merchants and travelers do actually enter and leave the scene like in an ancient anime.

Face Paint on Print: the Pop Stars of Old 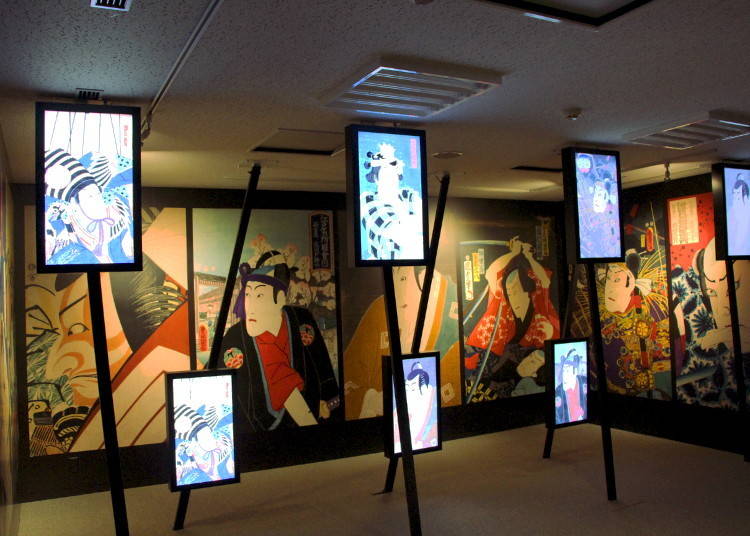 After crossing Nihonbashi, I found myself standing in a kabuki theater. Surprised by the change of scenery, I stared at the animated stage in front of me as the curtain was suddenly pulled aside, revealing a colorful play with vividly mimicking and gesturing actors. Around the screen, the life-sized audience had come to a printed-out life as well, making me feel like I am a part of them, cheering for their favorite faces. Speaking of – the Ikemen section was right up ahead, displaying dozens of portraits of kabuki actors of Old Edo. As ukiyo-e prints were relatively cheap in production and even easier to replicate, prints of kabuki stars of the time were sought after by Edo’s common folk, much like people nowadays strive to have a poster or autograph of their favorite musician or actor.

Super Ukiyo-e brought the most famous of those kabuki portraits together and not only showcases them, but actually animates them. I almost jumped in surprise when one of the grim looking actors in the typical red and white face paint suddenly drew his mouth into a snarl and rolled his eye menacingly, in accordance with his role. I wonder how an Edoite of the time would have reacted if their newly purchased ukiyo-e print suddenly started glaring at them... 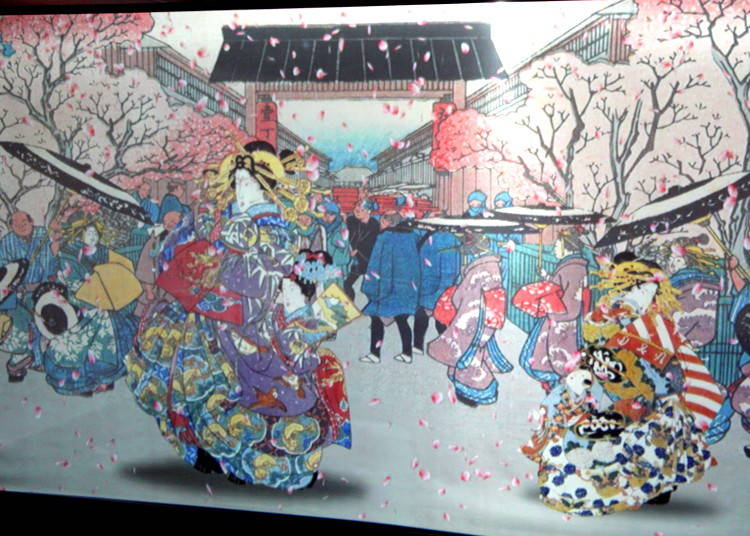 The exhibition led me from handsome men to fashionable women, showing off both day to day fashion and more elaborate garments of the Edo society. I stood in front of a wide screen portraying a beautiful winter scenery in front of a river, snowflakes dancing down slowly from the skies. This old winter wonderland actually turned into a runway as two kimono-clad ukiyo-e women walked gracefully onto the screen, beautifully and fluently animated from head to toe. I have to admit that it was hard to focus on the garments that they were wearing, as this category clearly was the Women’s Fashion – I was far too captured by the gracious movements, a naked leg peeking out from under the fabric with every step, a snowflake dancing just in front of one woman’s half-covered face.

A similar sight awaited me just around the corner, when the season turned from winter to spring and it suddenly wasn’t a river anymore but we found ourselves right in the middle of Edo’s amusement quarters. Now, it wasn’t snow dancing from the skies but pink cherry petals, setting the scene for extravagant geisha and beautiful noblewomen. Looking at this amazingly animated explosion of colors, ukiyo-e brought to life, I felt like I understood what the “Edo Code,” mentioned in the exhibition’s title, actually is.
Ukiyo-e are famous for being depictions of the authentic day to day life of common people. And while you’re likely to find a myriad of tiny details in every wood block print, Super Ukiyo-e shows the very scenery that the ukiyo-e artists themselves saw in front of them as they created their masterpieces. This is the real Edo, brought authentically to life with the medium of the time. 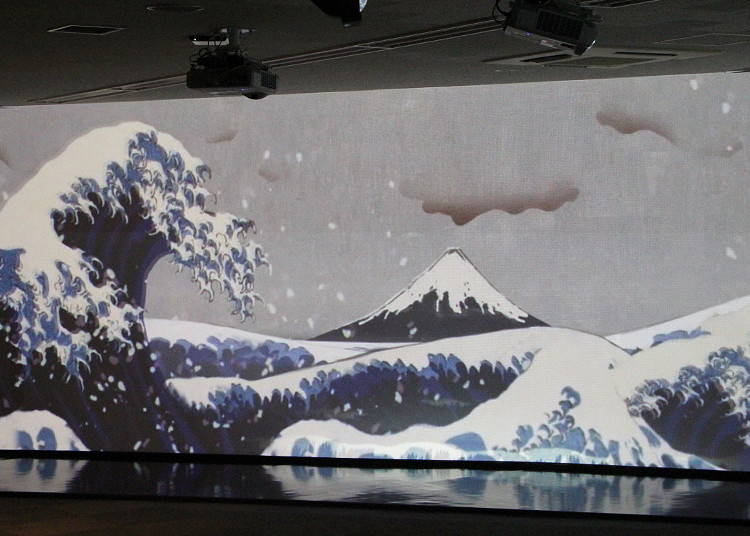 This impression that I got when looking at the graceful geisha was further strengthened when I stepped into another large room – and an entire ocean spread in front of me. With Mount Fuji towering in the background, it was immediately clear what this installation was based on: Hokusai’s Great Wave off Kanagawa. It was all there; the sounds of waves and seagulls, drops of sea spray raining down... and suddenly, as I took in the sight with all my senses, it appeared. The Great Wave off Kanagawa rolled in with a roar, across the screen, before a second and a third one appeared, along with fishing boats being tossed through the wild waters. I wasn’t the only one who stood in awe, watching the spectacle unfold in front of me. The other visitors were equally amazed, likely wondering the same thing as me: “This is what Hokusai must have seen. This is ukiyo-e.”

Once the sea had calmed down again, a school of fish appeared, jumping up and gliding through the air before disappearing into the dark waters again. Just like the Great Wave had suddenly appeared, now a massive whale emerged from the ocean, rolling its eyes as the onlookers – I could have stood for hours in front of this screen. 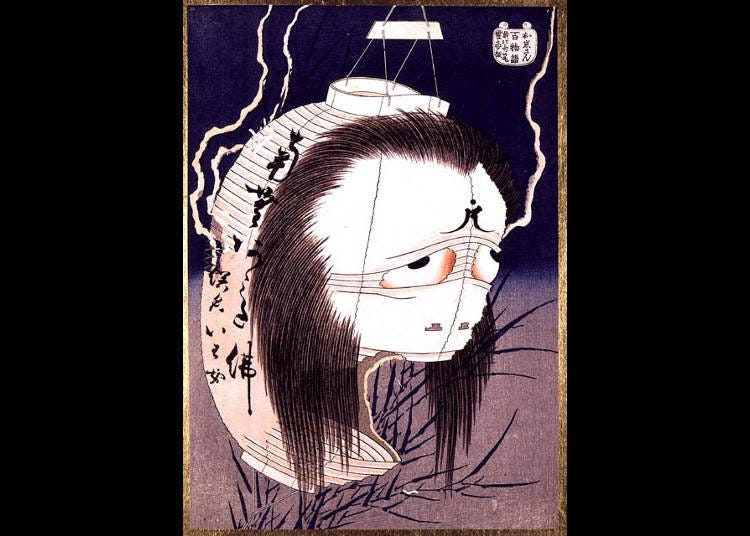 In the end, I had to move on, as there was yet another category to discover: Bakemono; monsters, ghosts, and spirits! As a fan of ancient ghost stories of all cultures but particularly the Japanese ones, I am familiar with the many unique ukiyo-e depictions of all kinds of creatures. Accentuated by ghastly howls and uncanny snickers, I stepped into yet another world, inhabited by giant skeletons, ghost ships, and lantern spirits. Narrated by the voice of Ainosuke Kataoka, the famous kabuki actor, the old legends and stories all came to life, one after another. I stood particularly long in front of a ghost called Oiwa-san, illustrated by Hokusai himself.

Oiwa is a protagonist in a kabuki horror story of epic proportions called Yotsuya Kaidan, or the Ghost of Yotsuya. To make a rather long story short, Oiwa is a woman first tricked and facially scarred by another woman who desires her husband, then betrayed by that very same husband in the worst possible manner and killed in the process. Oiwa isn’t done, though, and so she returns as a ghost and haunts her terrible ex to the brink of insanity – such as emerging from a paper lantern, the scene that Hokusai portrayed in his ukiyo-e work. Written in 1825, a time that was particularly tough for women, the play enjoyed massive popularity, as people could easily relate to the victimized characters and particularly enjoyed the tormentor, Oiwa’s husband, turning into the tormented. The giant Oiwa paper lantern that groaned at the onlookers at Super Ukiyo-e would have impressed and entertained a good deal of the Old Edo crowd, I am sure of that. 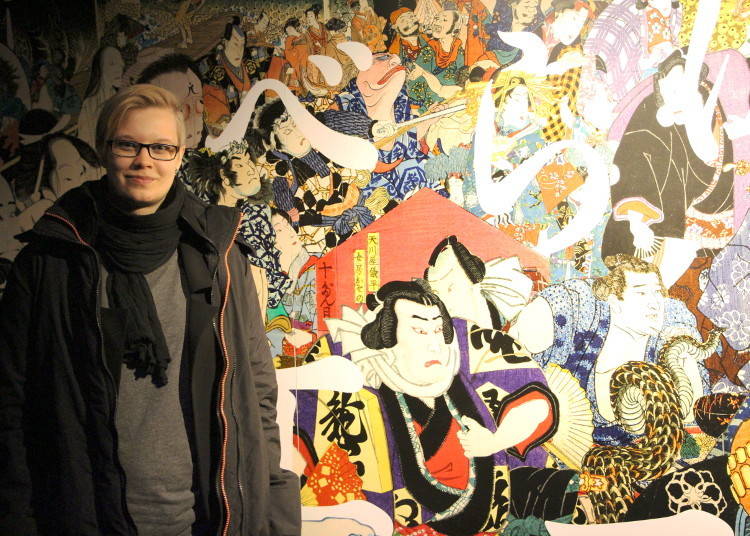 With Oiwa’s howling in my ear, I stepped in the elevator to face daylight once more, and while I left the exhibition, the many impressions of Super Ukiyo-e are sure to stay with me. From the beautiful recreation of Old Nihonbashi and the kabuki stage to the magnificent geisha and ghastly ghosts, I genuinely was surprised by how much the exhibition made out of those famous ukiyo-e creations that we have seen time and time again. And yet, every single one of those is portrayed and can be experienced in an entirely new way. Most of all, however, Super Ukiyo-e does crack the Edo Code: by animating all the different works and oftentimes transforming them from 2D to 3D, you’re entering the very world that the ukiyo-e masters of old, being able to see it in all its vivid colors, sounds, and movements. You think you know Edo and ukiyo-e? Don’t be too sure about that - go experience Super Ukiyo-e for yourself and see what kinds of things you’ll find in the Edo Code! 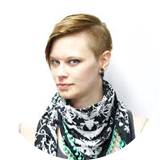