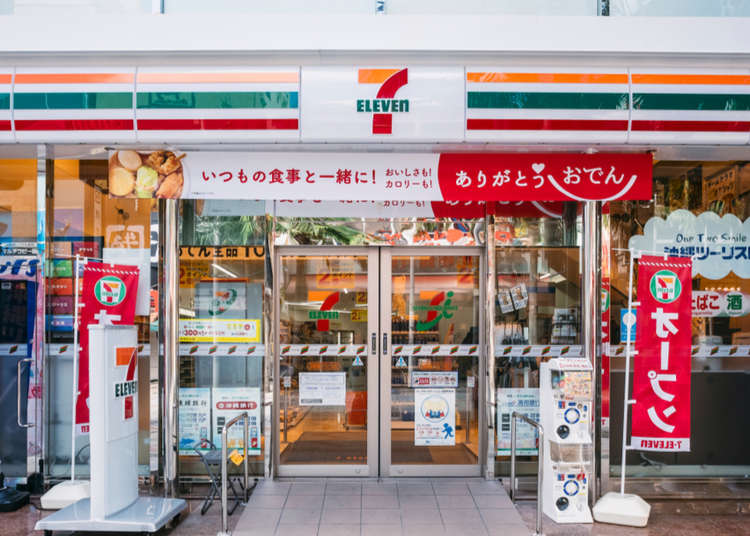 What are the best sweets at Japan’s top convenience store? We asked tourists to vote on their favorites from 7-Eleven, resulting in a mouth-watering smorgasbord of snacks! 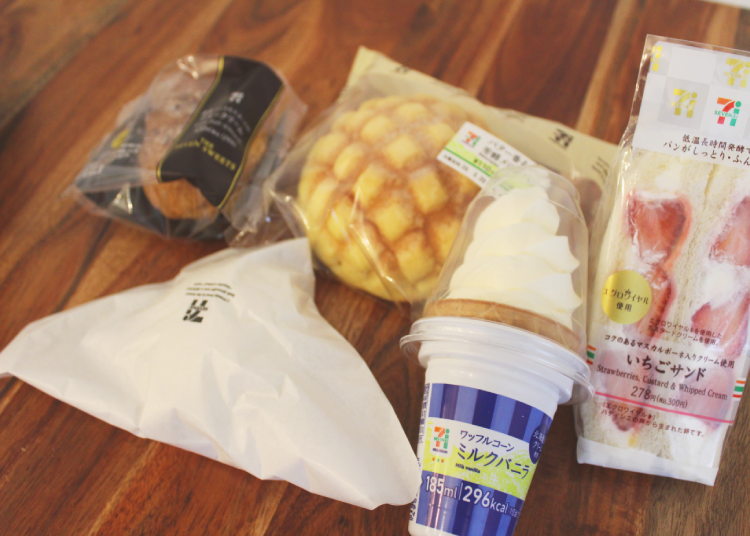 Okashi, Japanese Sweets, have captured the hearts of travelers of all stripes. But you don’t have to find a bespoke confectionary store, go to a high-end patisserie, or dine in pricey soft cream parlor. Quite the opposite in fact! 7-Eleven, Japan’s most ubiquitous convenience store chain, is paradise for those with a sweet tooth, and has a wide range of sugary delights.

We asked a group of 70 tourists on a popular online travel group to share their favorite sweets from 7-Eleven in Japan. But which one topped the charts as their ‘love at first sight’? Or should we say, ‘love at first taste’? Here’s what we found: 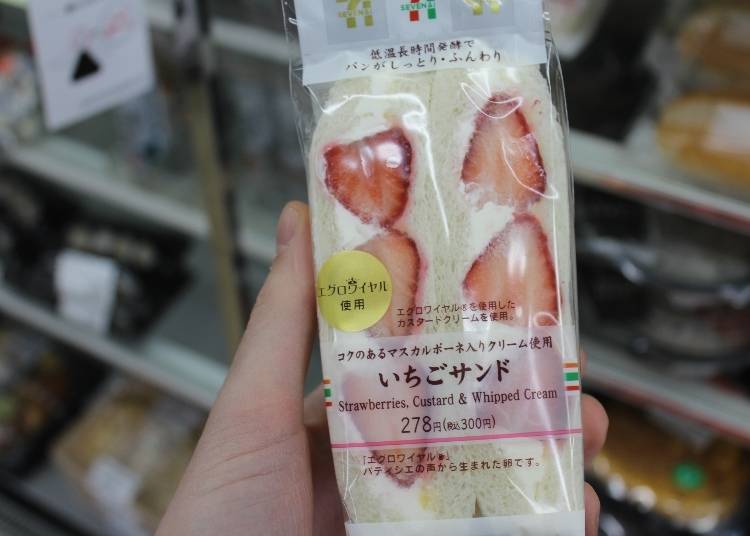 Strawberry sandwiches, known as ‘ichigo sando’, topped the voting charts, with 23 votes totaling a third of the overall number of votes cast. They are exactly what they say on the tin: sandwiches that replace their typical savory filling with sumptuous strawberries (and a dollop of whipped cream for good measure). 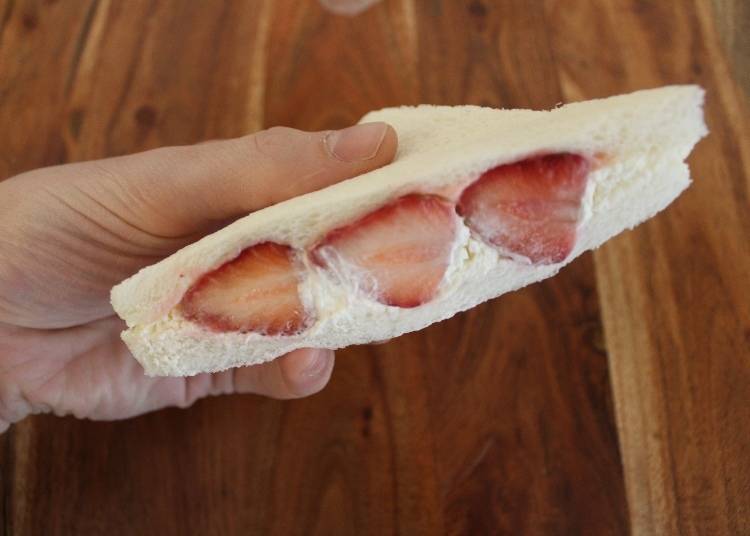 Taste and Texture?
7-Eleven’s strawberry sandwiches are surprisingly not overly sweet, but do pack a little sugary punch. Inspired by Japanese “strawberry shortcakes”, they use light fluffy bread with fresh strawberries and cream; most of the sweetness actually comes from the custard that’s hiding within. Texturally, they are light as a feather, thanks to the airy bread used in lieu of thicker Western-style loafs. 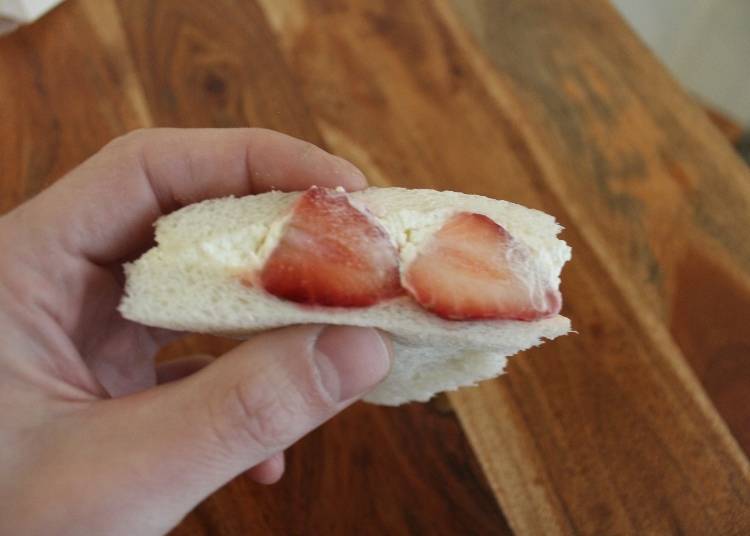 When and How to Eat It
As ichigo sando are considered desserts, they pair well with the same accompaniments that other desserts do: tea, coffee, milk and other milk-based drinks (of which 7-Eleven has no shortage). Spring is Japan’s strawberry season, and as such is the best time to chow down on of these sandwiches, but that shouldn’t stop you from indulging at any other time of year! 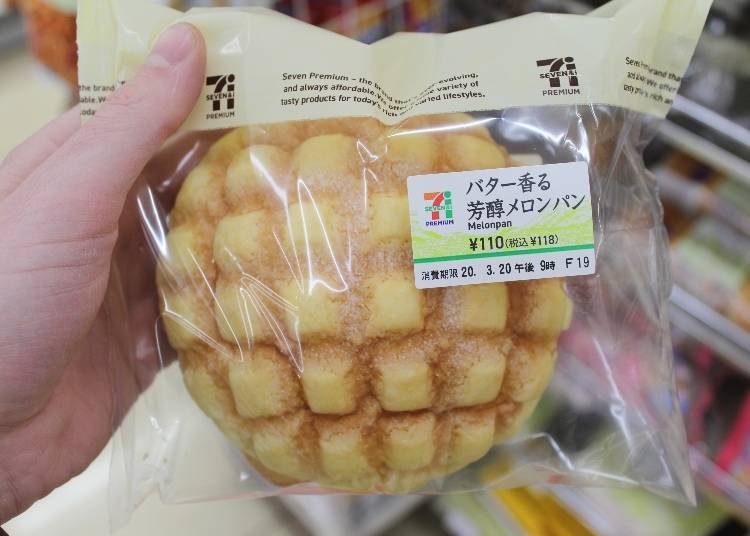 Melonpan was a convincing second on our list, with a total of 17 votes. It comes in a few variations, only one of which, surprisingly, tastes remotely like melon. Melonpan is a sweet bun covered in a crispy outer layer. The cross-hatch pattern baked into the outer layer is what gives the bread its name; made from cookie crust, it resembles melon rind… well, sort of. Melonpan now comes in a variety of flavors including strawberry, chocolate, and matcha (green tea). You can also find variants with creamy fillings inside. But it is 7-Eleven’s standard melon pan that we are concerned with today. 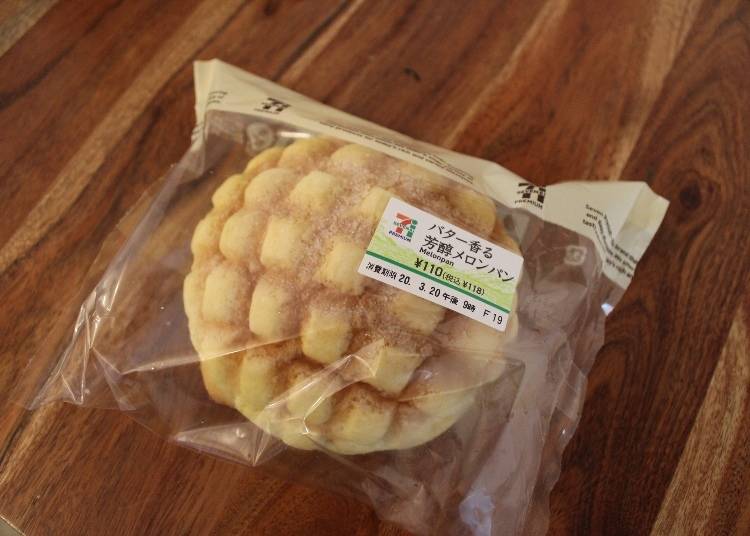 Taste and Texture?
Similar to 7-Eleven’s strawberry sandwiches, their melonpan is actually not overly sweet, which is probably an explanation for its popularity; giving customers the freedom to keep coming back for more without the guilt of overindulgence. Texturally they are light, like many other Japanese breads, and taste similar to French croissants: buttery, a little sweet and a little salty. The crusty topping provides a nice contrast with the bread’s lightness and is where much of the sweet flavor comes from. 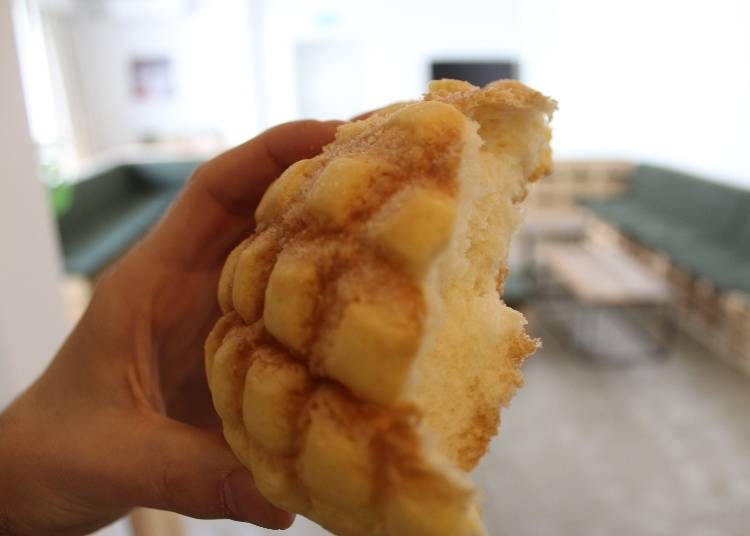 Soft on the inside

When and How to Eat It
The fact that its flavors are not too brash or overpowering makes it work well as a quick breakfast, lunch or snack bite. Naturally this means it goes down well with your morning cup of joe too. In terms of season, there’s no bad time to get better acquainted with 7-Eleven’s melon pan. 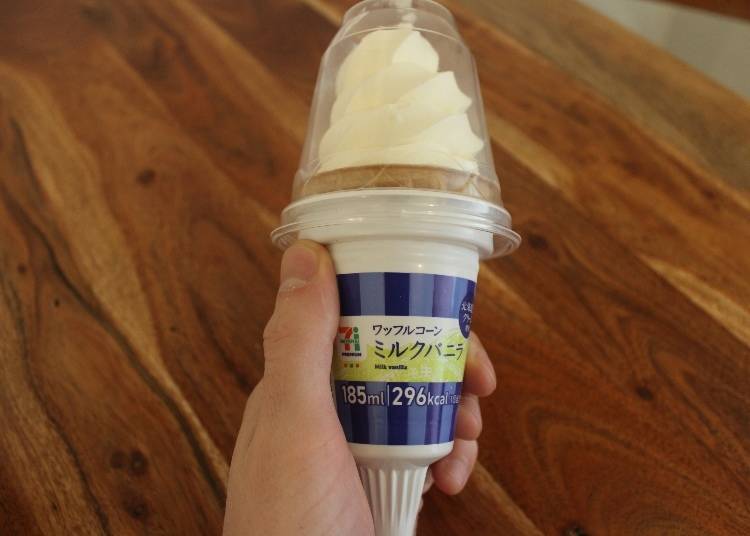 7-Eleven’s swirly vanilla ice cream, known by its ‘Japanglish’ name Milk Vanilla, was a respectable third in the poll with 9 votes. What differentiates this from other ice creams is primarily its waffle cone. Cone ice creams usually come on top of a plain conical wafer, which may facilitate holding, but doesn’t really enhance the taste all that much. The ice cream used by 7-Eleven is a nice milky, and relatively thick, vanilla blend swirled on top of a sweet waffle cone. Befitting of a convenient store it’s also super easy to grab as it’s pre-packaged and ready to go in the freezer! 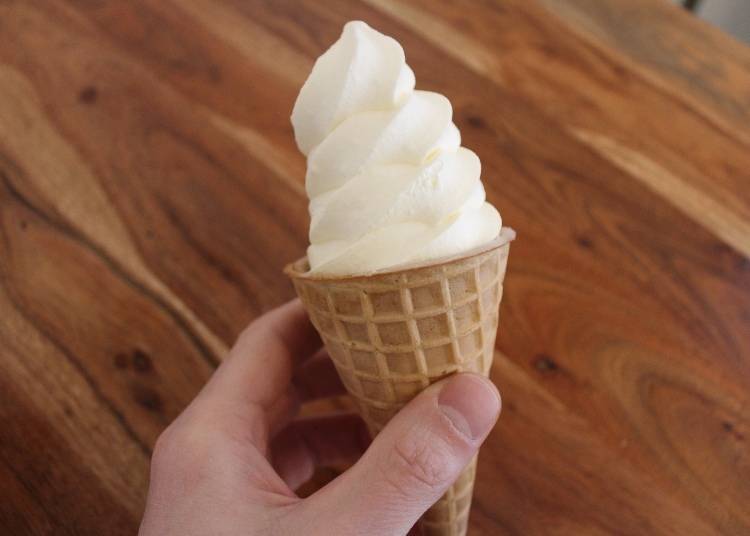 The perfect ice cream for a sunny day

Taste and Texture?
Milk vanilla ice creams are undoubtedly delicious, with the cone adding an extra bit of oomph to the sweetness of the snack. Both the ice cream and the base are quite heavy, but with vanilla being a slightly more neutral flavor than say chocolate or caramel, it balances itself out. It’s no wonder that this seemingly run-of-the-mill snack has sparked hype across the walls of social media. 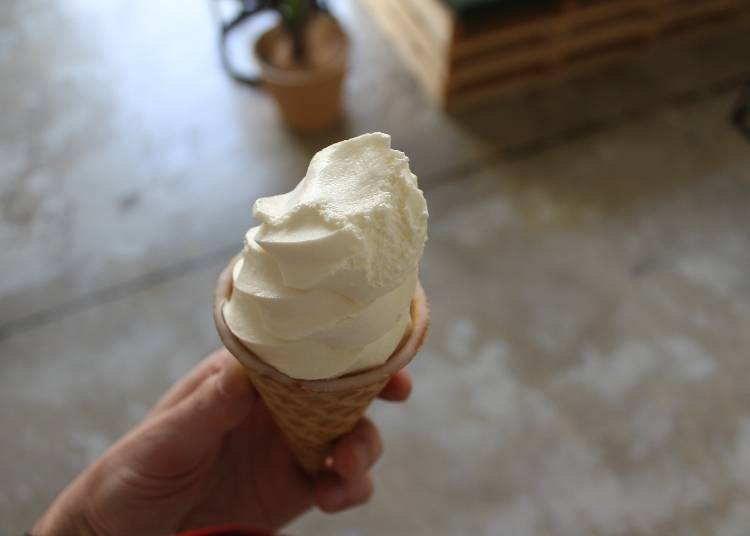 A soft ice cream that keeps perfectly in the freezer!

When and How to Eat It
Unsurprisingly, summer is the optimum time of year for some milk vanilla ice cream. The Japanese summer can be furnace-hot, and especially in larger cities tourists often find themselves walking and walking and walking. 7-Eleven’s most popular ice cream is a great way to give yourself a little cooling reprieve from the sweaty outdoors. If you wanted to go all out, you could even add a small chocolate bar into the ice cream, as a pseudo-99 flake! 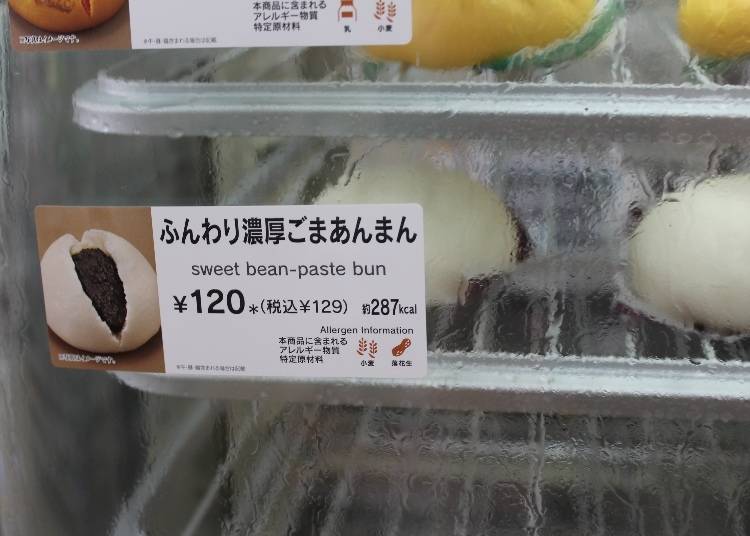 7-Eleven’s an man are hot, Chinese-style steamed buns with an anko (sweet red bean paste) filling. They came joint fourth on our list with 3 votes, and are arguably the most ‘Japanese’ sweet of the lot. Anko is made from red azuki beans that have been boiled with sugar and mashed into a paste. It is a common addition to a myriad Japanese treats, from traditional style buns filled with anko given out during temple visits, to anko balls that are added to matcha ice cream – a delicacy in Kyoto. In the case of an man, the anko filling is surrounded by a bao bun made from yeast, popularized by Chinese cuisine. 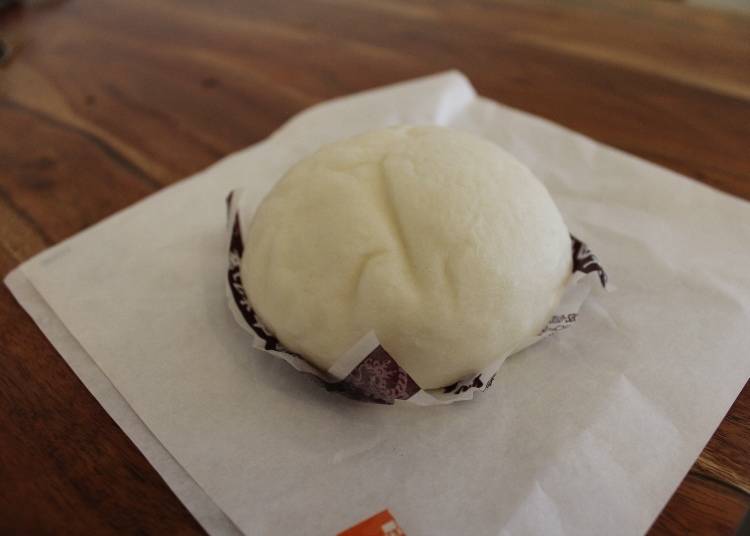 Taste and Texture?
Like most bao buns, an man’s outer texture is light – almost jelly-like – soft and airy. Inside is where the sweetness comes from. Anko has a mushy texture, but combined with the softness of the hot bun makes a wonderfully delectable combination. While anko is sweet, it is more representative of traditional Japanese treats where the sugariness isn’t too overpowering. 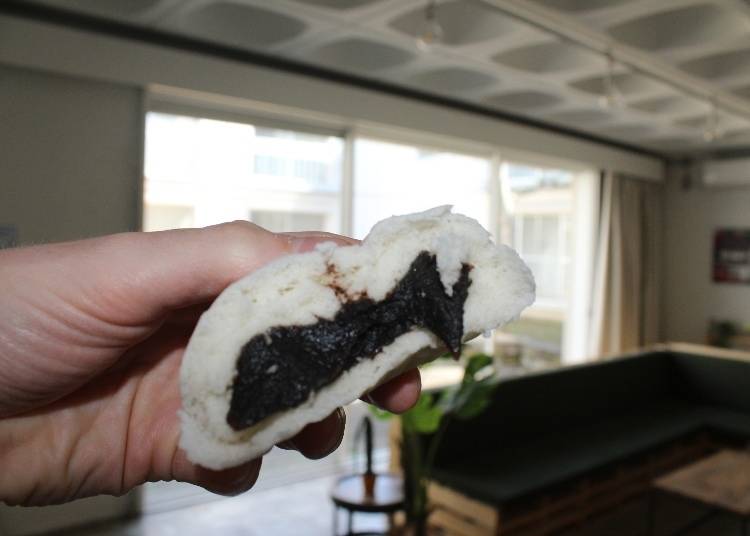 Look at all that sweet bean filling!

When and How to Eat It
An man are found in heated glass counters by the shop till. Given their small size, they are a great light snack and go very well with 7-Eleven’s range of Japanese teas (hot or cold), such as matcha, oolong, jasmine, hojicha, or most other teas. They also work well as a light breakfast snack if you weren’t able to fill up at your hotel! 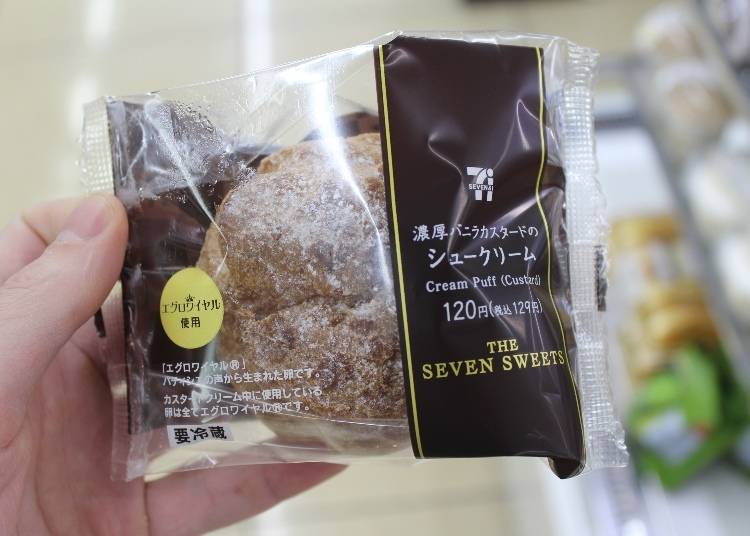 Joint fourth also with 3 votes was Shu cream. Known colloquially as ‘cream puffs’, they are little pastries filled with custard, or custard and cream depending on your inclination. They are baked using classical French techniques, with flour, butter, eggs, sugar and a rich cream which uses extra vanilla beans to give an added sweetness to the overall flavor profile. In France ‘choux’ is a light pastry dough, and this is where the ‘shu’ in the pastry’s Japanese name derives from. 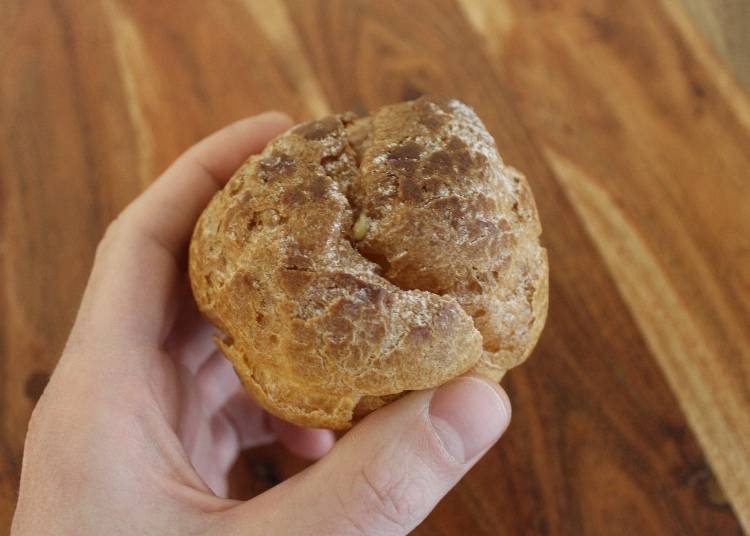 A round little Japanese pastry

Taste and Texture?
As you would expect from a French-style pastry, 7-Eleven’s shu cream are a light and crispy textural delight. The burst of flavor comes from the sweet and creamy filling which really compliments the outer layer. It’s hard to believe that these pastries come from a packet, and not the shelf of a bakery! 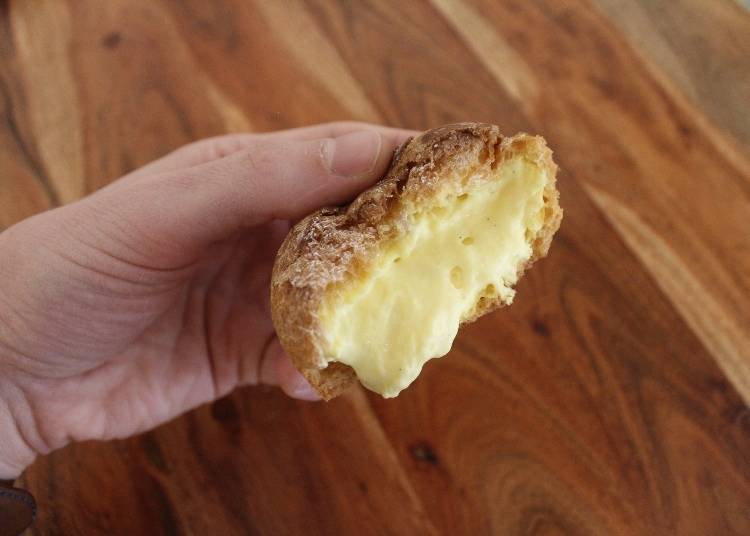 All that creamy goodness!

When and How to Eat It
Shu cream puffs could work well as a breakfast substitute if you don’t mind saccharine flavors in the morning, but lean more toward the snack or dessert end of the spectrum. They go great with coffee, particularly milky coffees like lattes or cappuccinos. If they are refrigerated, the creamy filling can be extra refreshing in the hotter months of the year!

A Little Taster of What’s in Store

The above is just a small sampling of the deluge of snacks and treats that Japan’s 7-Elevens have in store. Our list of snacks included 10 popular options, but in the end these came out on top by a landslide!

So, while Japan’s touring public has spoken, and decided upon their top five favorite 7-Eleven sweets, there’s plenty more still to feast on. Enjoy!

*Tax inclusive prices are based on the 8% consumption tax as of the time of posting
*Product specifications, prices and release dates may vary depending on the region.
*Availability may vary by store and season