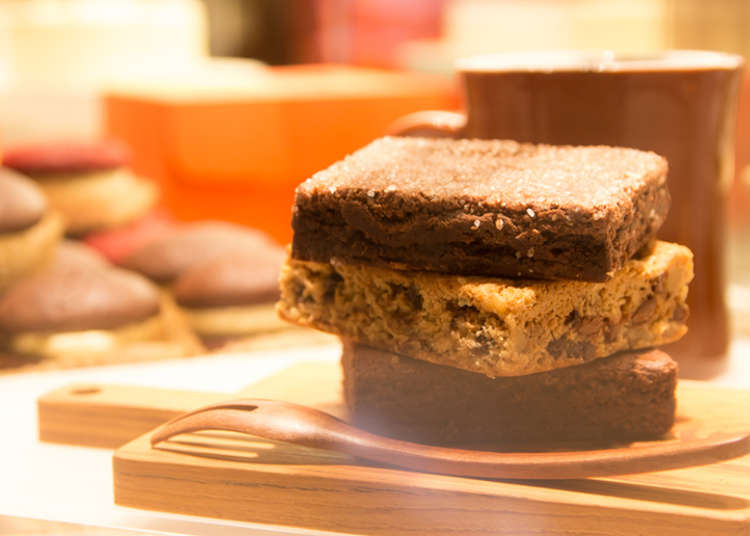 Coming a long way from home to Japan, anyone would want to get renowned products as souvenirs for their friends and family back home. Getting them original, area-specific products especially in wide wide Japan would surely make for excellent gifts. Receiving such goods that are a whole different level from the generic riff-raff will surely make anyone happy.

But where in Japan should one start? For such a situation, Japan’s venerable 131 year-old department store “Isetan Shinjuku” makes for an excellent choice. Boasting a collection of goods of the highest grade within Japan, you can be guaranteed the quality of your present if it’s from Isetan Shinjuku. Today, we’ll pull out our top recommendations from said collection. 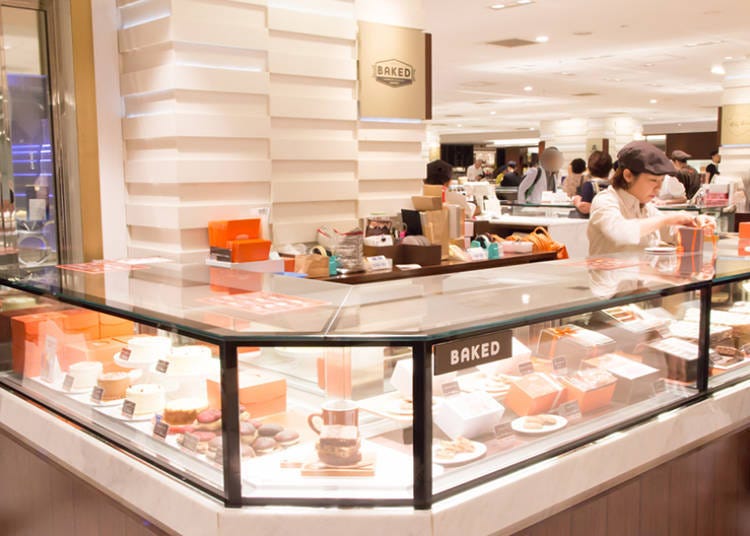 “BAKED” is a Western sweets shop that’s being making waves around Brooklyn in New York. For now it can only be found in Isetan Shinjuku, specializing in American baked treats like brownies, cheesecakes, crackers, and whoopie pies. It’s a shop that has received much support from visitors from both the East and West, as well as those from Northern Europe. 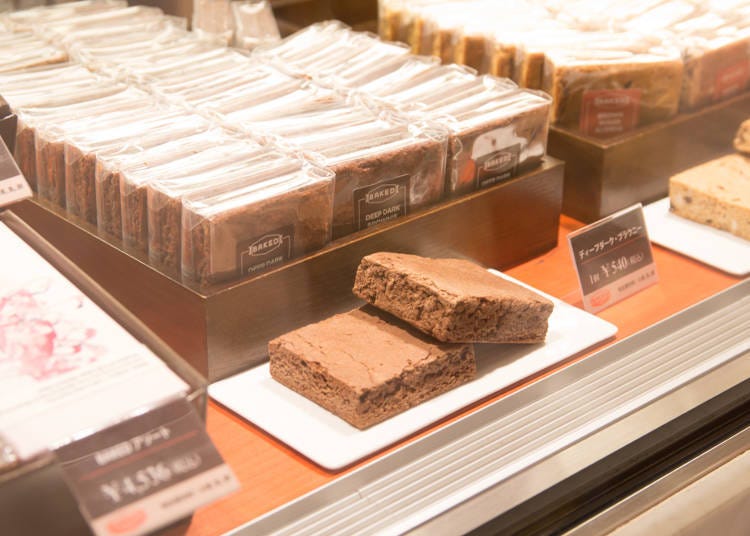 The (figurative) poster girl of BAKED, the Deep-dark Brownie is a faithful reproduction of the Brooklyn bakery’s original recipe. Heavy and chunky, one bite and the flavor of the rich mellow chocolate spreads throughout the mouth. At 540 yen apiece, it’s popular with customers looking to get small presents. 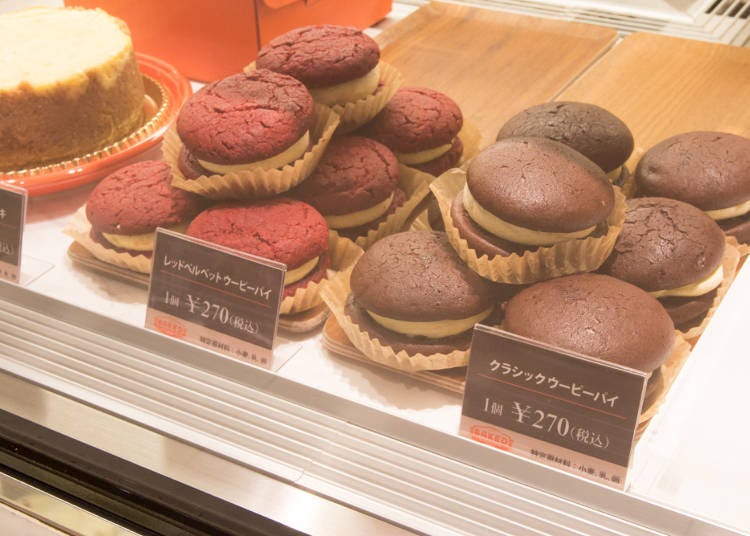 Other than brownies, the store also carries whoopie pies, a New York classic delicacy made by sandwiching butter cream crafted from dense Swiss meringue between pillowy soft cookies. These are best enjoyed fresh, so it’s recommended that it’s consumed on the day it’s bought.

Tastes as good as they are cute. “Hallongrottor” by “Fika” 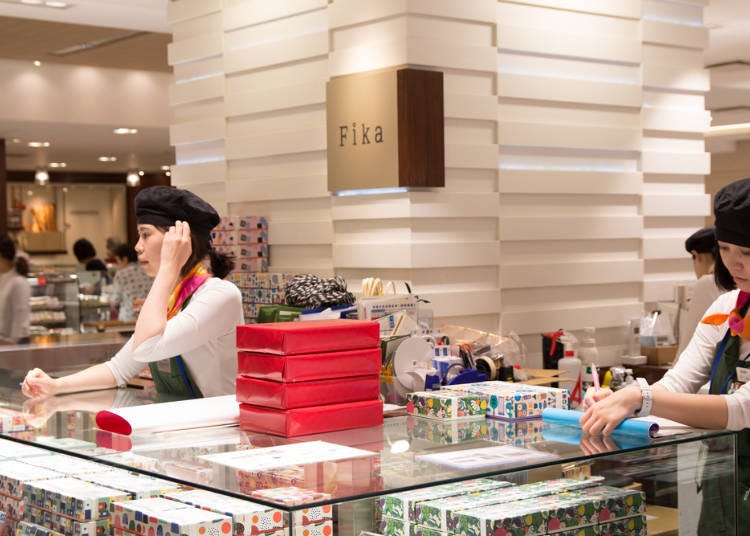 “Fika” is a Swedish patissiere that specializes in sweets commonly eaten in Northern Europe. The brand itself was originally produced in Mitsukoshi Isetan, and opened another branch at Isetan Shinjuku. The store’s namesake, “fika”, is Swedish for “snack time”, embodying the importance the Swedish place on their coffee breaks. 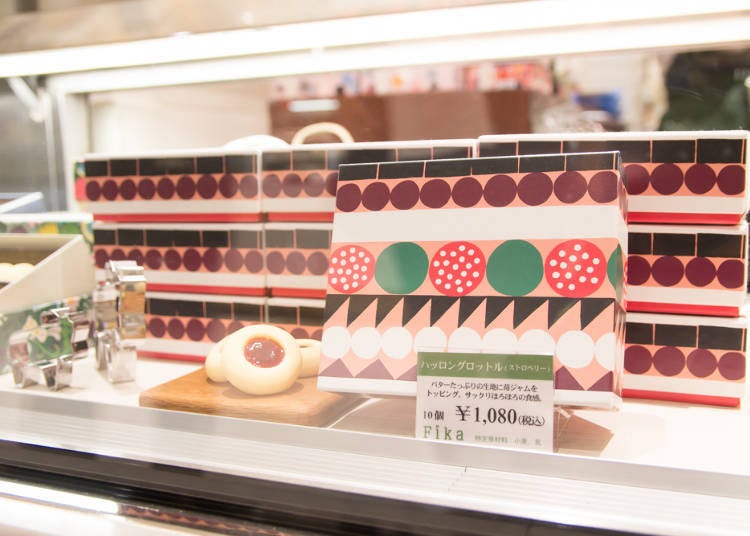 Crumbly cookies where you can taste the buttery goodness brings about the characteristic flavor of Northern European confectionary. The packaging which adopts a Scandinavian design is so cutely printed that it wouldn’t be surprising if someone were to be tempted into buying it simply because of its box. Its size is also a good fit, especially for the price. Once, a customer presented to his significant other a bouquet of flowers garnished with rings of Hallongrottor.

The Aroma of Scorched Butter Will Leave You Wanting for More! “Noix de beurre”’s financiers 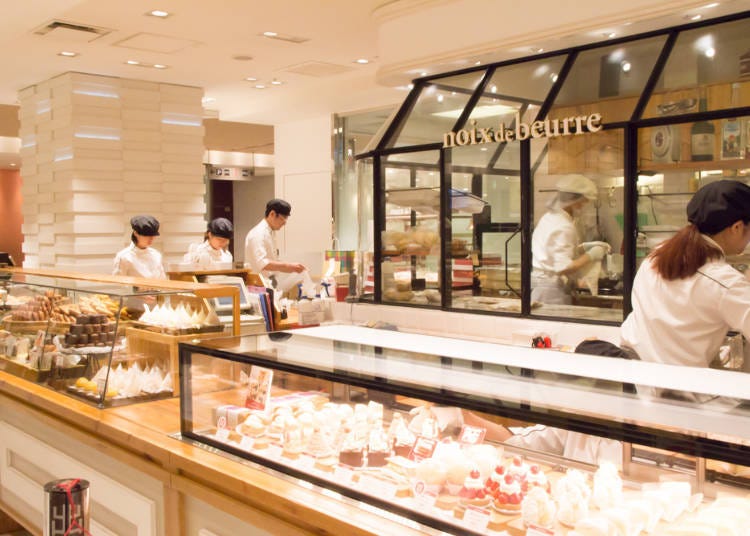 This Western sweets shop is usually surrounded with the drifting aroma of scorched butter. From cakes to baked sweets, it has a large repertoire of delicacies for sale and can only be found in Isetan Shinjuku and the Mitsukoshi department store in Nihonbashi. Among its already impressive menu, its Baked Financiers are the top of the popularity charts, baked fresh in-house everyday. 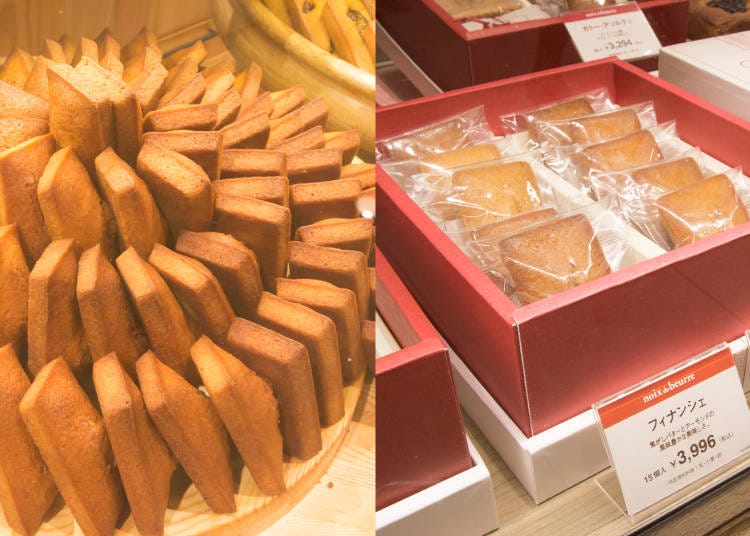 On the Left: Baked Financiers / On the Right: Regular Financiers in Packs

While the shop is famous for their Baked Financiers, their regular financiers which come in packs, are also surprisingly popular in the summertime as snacks that can last the entire day without being refrigerated. According to the staff, both are made from the same ingredients the same way, but the result is a completely different texture and taste.

The baked ones are crunchy on the outside, yet soft on the inside. The regular ones, however, are somewhat soft both inside and out, as the batter needs to settle down as quickly as possible, and thus is a more consistent flavor. Since they both have their own strengths, one should consider the preferences of the receiver as well as when they are receiving the gift. 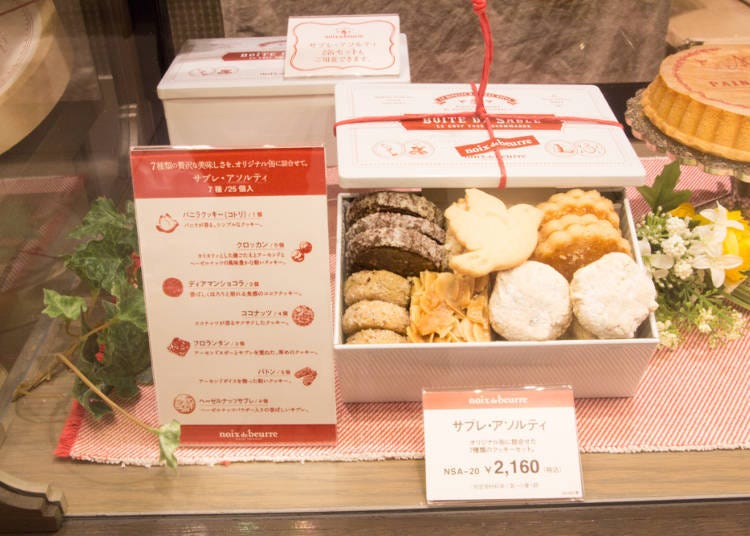 Other than financiers, their sable assortment that comes in an original can containing 7 different cookies is also a great choice. Opening the lid of the container reveals a bundle of cookies each overflowing with individuality, truly a sight for sore eyes. Again, this is perfect for being carried out for the entire day, and as such is popular with customers just about to fly home from Japan. 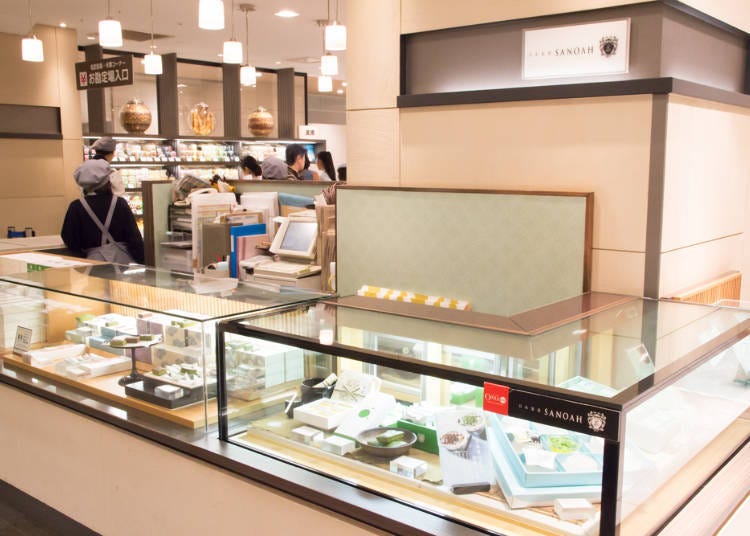 A shop whose creations are based on the concept of “edible Japanese tea”, the Japanese confectionary “Nihonchaka SANOAH” makes one-of-a-kind matcha sweets that greatly complement the modern lifestyle. 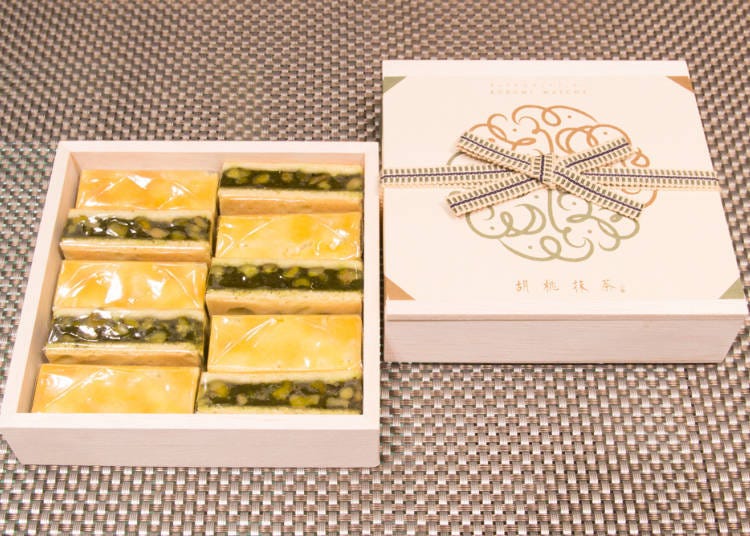 Their most popular item is their “Caramel Sandwich Cookie Kurumi Matcha”. Neatly packed in an ultra-classy wooden box, wrapped neatly and beautifully by “sanadahimo”, a special string cord made of a material oft used in kimonos. According to the staff, the store was involved in creating wrappers for the tea industry for over a 100 years, and so pays extraordinary attention to the packaging. 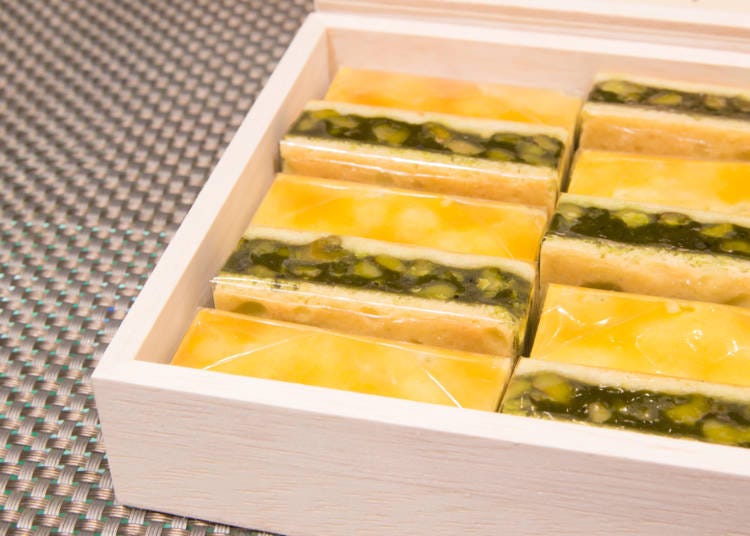 High quality uji matcha was lavishly used to create a cookie of unparalleled luxury. Chewy caramel batter coupled with the bold matcha accents the chunks of walnut in the paste well. Bite-sized yet filling, this is one of limited goods only available at Isetan Shinjuku. 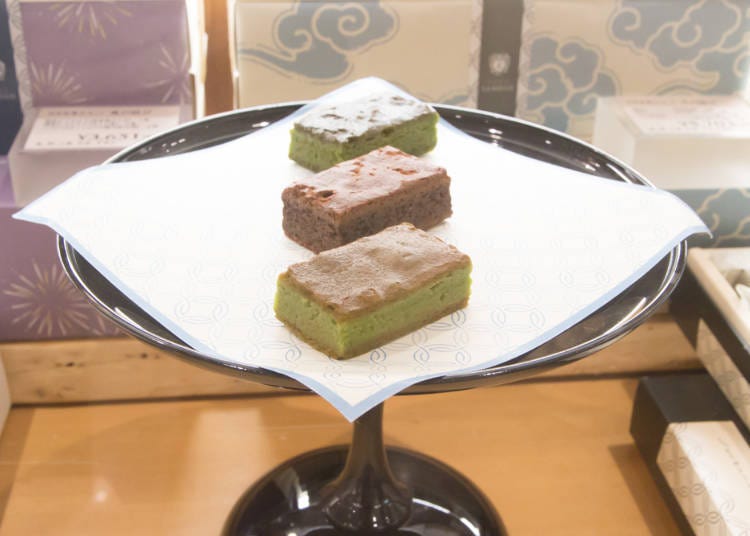 Other than the Caramel Sandwich, the “Moist Gateau Chocolat Kinunosa” chocolate pastry has its own fair share of popularity. A baked treat in which the flavor of the Japanese tea is further emphasized when coupled with French chocolate, it utilizes three kinds of Japanese tea: matcha, hojicha, and sencha. The differences in flavors between the different tea leaves is enjoyable in itself, and would be a perfect present for someone who loves Japanese sweets.

The Comforting Taste of Matcha Milk Will Make It Your Comfort Food! “Shinjuku Nakamura-ya ISSUI”’s “Sonoshizuku” 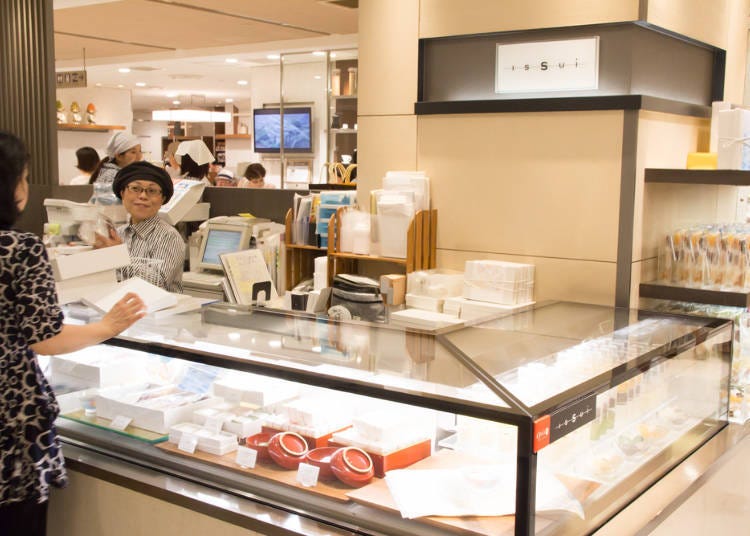 Dating back to the Muromachi Period, the “kashiwan” is said to be the root of wagashi. Using such a bowl in a modern arrangement of Japanese sweets is the core of the store “Shinjuku Nakamura-ya ISSUI”. This time’s recommendation is a jelly available only at Isetan Shinjuku. 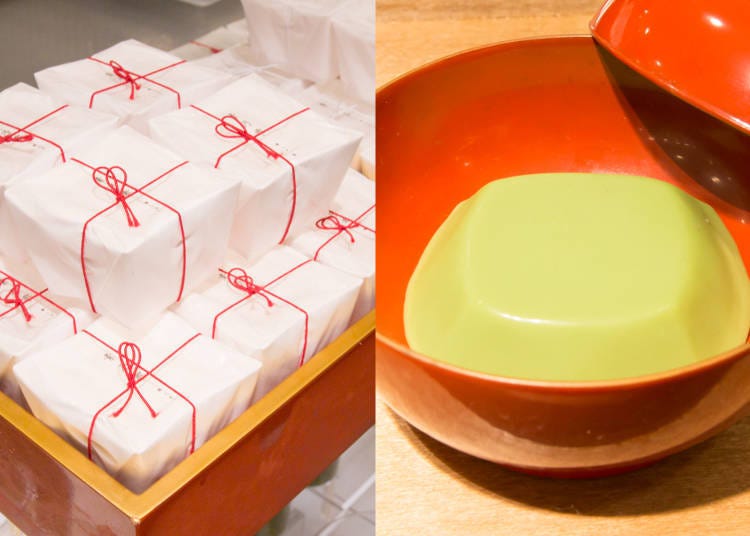 Carefully kneaded warabimochi topped with milk and fresh cream then jellyfied, this Isetan Shinjuku-limited snack prides itself in its springiness. One bite and an explosion of matcha and milk erupts in your mouth, an exquisite match of flavors. A simpler version that doesn’t use matcha, the “warabi flavor”, is also available, and customers who get both to go are plenty. 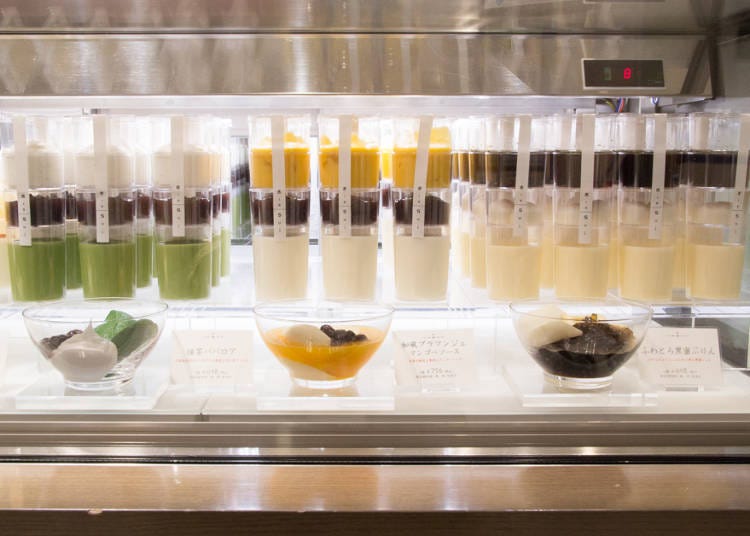 Of course, more modern Japanese sweets are also available as mentioned above, the most popular being the “Fluffy Melting Kuromitsu pudding”. Setting the standard, each product is finely arranged like a bowl, or wan, so one can enjoy authentic kashiwan in the comfort of their own home 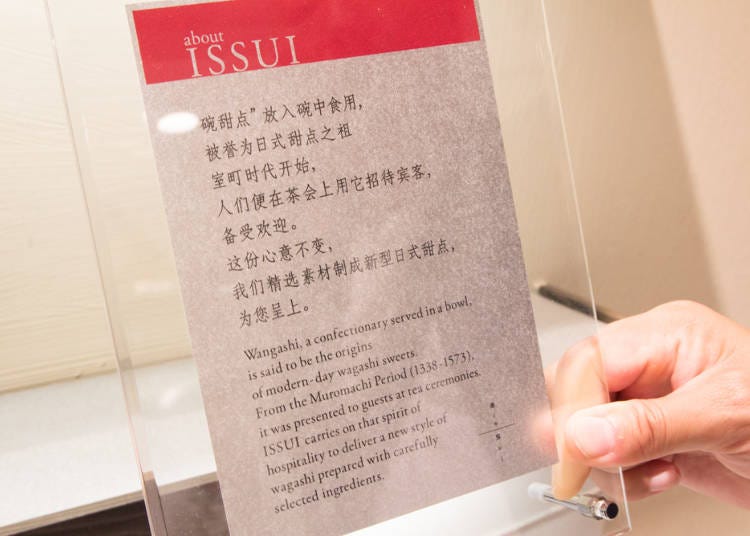 Additionally, the store’s menu, written in English as well as Chinese, is another unique trait. The history of the store, what kind of goods it handles, all of it is written in the two languages, so even foreigners can grasp the nature of the shop in but a glance. In truth, many Asian customers frequent this shop, and many have voiced how helpful the introduction is. The Japanese’s consideration for others, “The Heart of Omotenashi” shines bright in this small act.

Transcending Hospitality: The Happiness When Receiving A Hard-to-obtain Gift

The products we’ve introduced this time around are mostly limited to Isetan Shinjuku. Precisely because these gifts are hard to come by that the receiver is bound to be happy. Many of the recommendations are in essence can be brought around for the entire day without needing to be kept in a fridge, thus they are perfect for not just petty goods, but for Tokyo souvenirs as well. What do you think? Why not try paying a visit to Isetan Shinjuku in a quest for rare souvenirs as well?