HOME Tokyo and Surroundings Tokyo Shinjuku Complete Guide to Shinjuku Station: Find the Shortest Route and Access to Your Destination 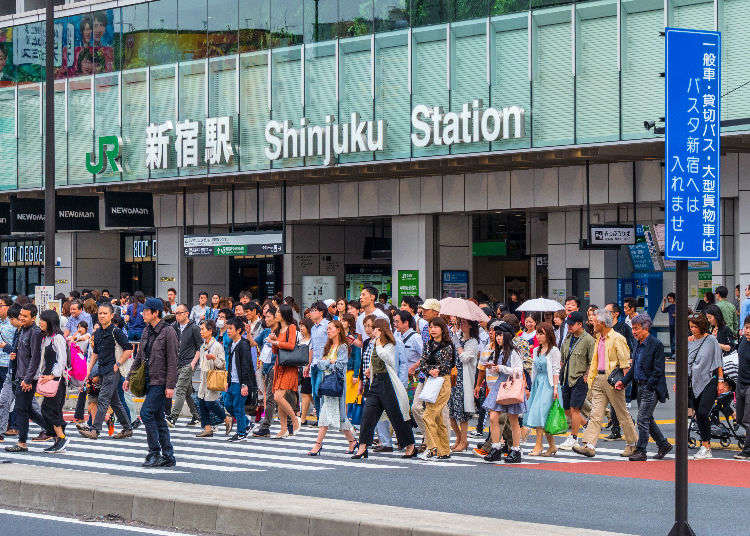 Shinjuku is one of Tokyo’s – and Japan’s – busiest areas, acting as an office town, a shopping district, a center for urban culture and lifestyle, and a prime tourist destination. In the center of all of this is Shinjuku Station, a massive hub that connects five railroads and people from all over the country.

Giant shopping malls border the enormous station and Kabukicho, Tokyo’s most famous red-light district. Towering home electronics stores sell state-of-the-art electronics to locals and tourists alike - and everything is connected by a vast underground network of exits, arcades, and tunnels, all belonging to Shinjuku Station. The hub deserves its reputation as a labyrinth of over 200 entrances that, at times, can be seemingly impossible to navigate.

Here, we will explain the intricacies of Shinjuku Station and the best way to reach the exits you want so that you don’t have to be concerned about getting lost while sightseeing in Shinjuku or when transferring between lines. We will also cover where to go if you get lost and how to navigate through the many signs. If you are planning to use Shinjuku Station, prepare in advance! 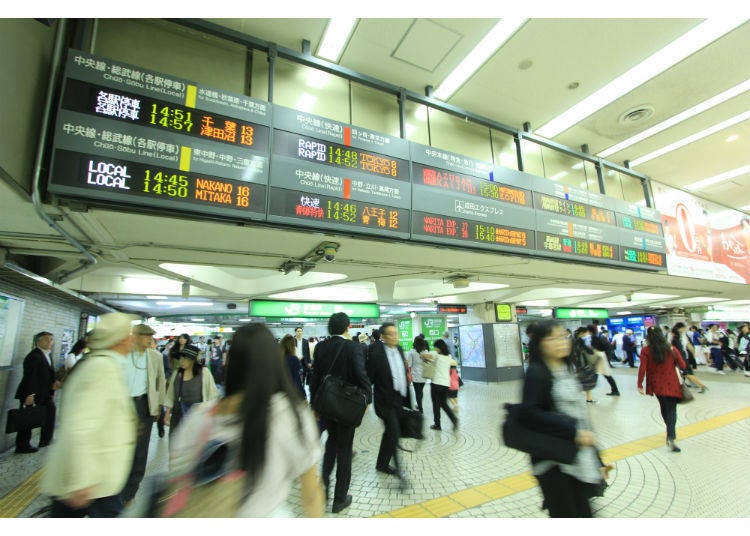 ― Guinness World Record Holder as The Busiest Station in the World
Shinjuku is the busiest train station in the world, with an average daily passenger count of about 3.42 million in 2015, granting it an entry in the Guinness Book of Records. The Odakyu and Keio lines in Shinjuku Station are on its West side. This is also the central station from which to reach Hakone/Odawara, a sightseeing spot in western Tokyo or Kanagawa Prefecture. Also, Shinjuku Station on the Tokyo Metro Marunouchi Line is on the North side of the JR station, and the Toei Oedo Line and the Toei Shinjuku Line are on the South-west side.

― Over 200 Exits and Ticket Gates
Above the station, there are seven station buildings, including the JR LUMINE department store, Odakyu Department Store, and Keio Department Store, as well as an underground shopping mall, station concourse souvenir shop, and restaurants. The ticket gates and exits of the railway companies are scattered in various directions, and the number of exits from the underground to the surface is over 200.

― Over 30 Platforms, 16 at JR Alone
Shinjuku Station is located in the southwestern part of Shinjuku Ward. It’s only 800 meters from the following “Yoyogi” Station (Shibuya Ward), so you can even hear the announcements playing in Yoyogi Station on platforms 5 and 6 at the southern end of the JR station.

In addition to the Yamanote and Chuo lines, there are many others, including, Sobu Line, Saikyo Line, and Shonan Narita Express. There are 16 platforms for the JR lines alone. 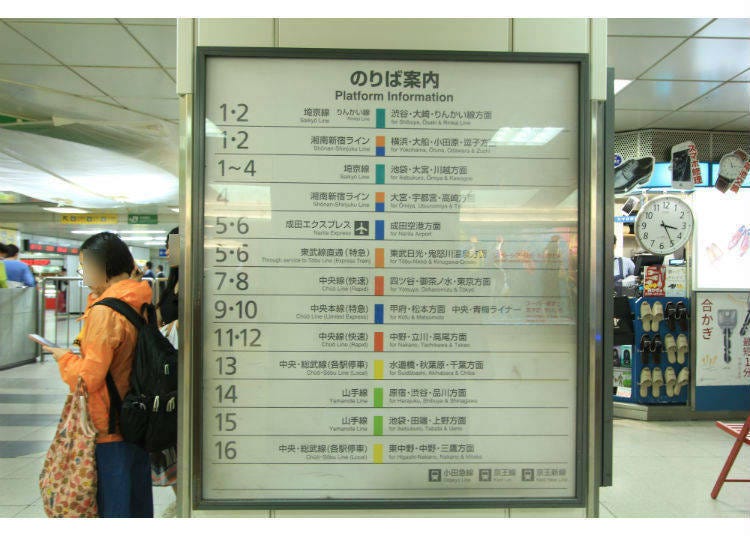 ↑The Connection Guidance at JR Station

The JR, Odakyu, Keio, Tokyo Metro, and Toei Lines that enter Shinjuku Station are shown in the table. This is a must-check when traveling around Tokyo, or suburban areas reachable from Shinjuku Station, or when transferring. 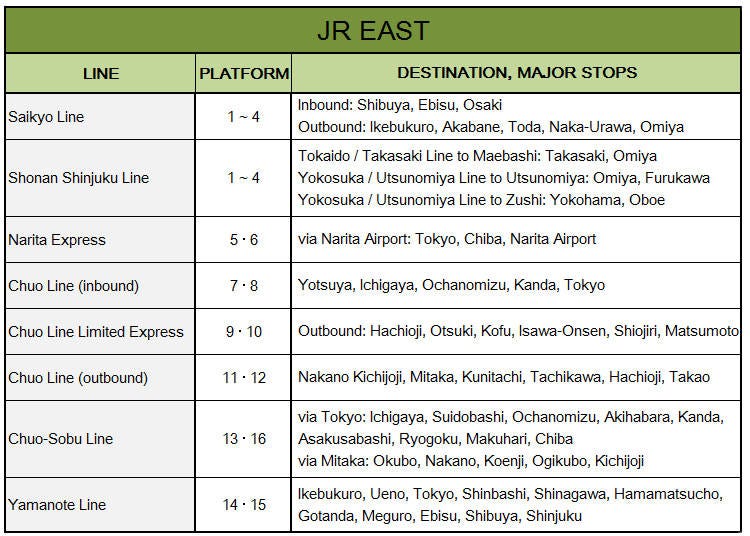 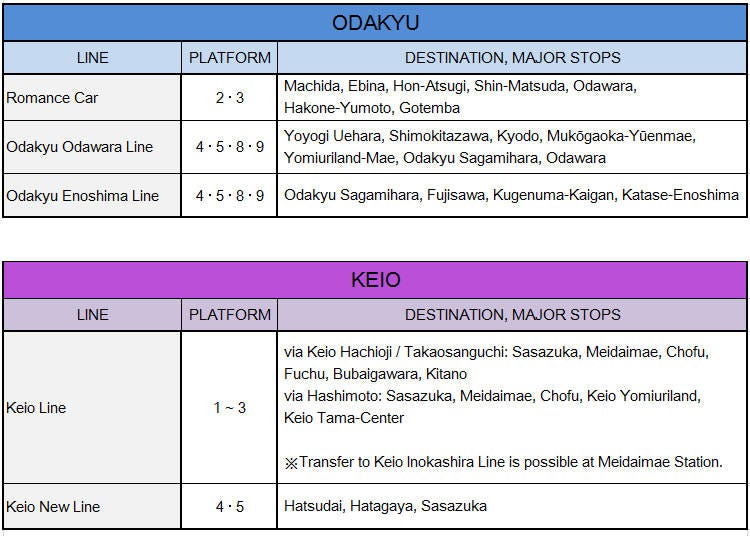 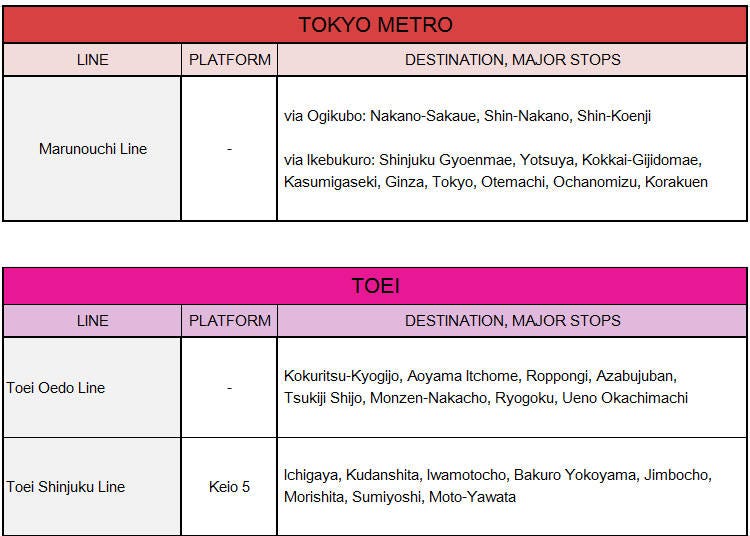 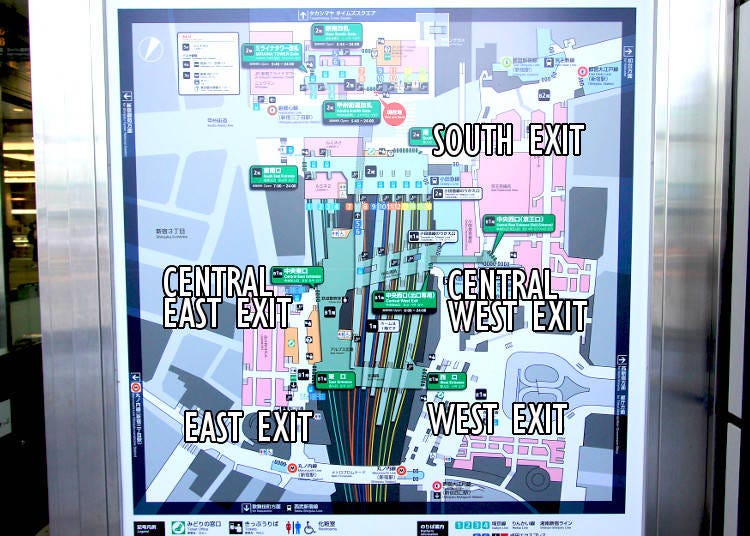 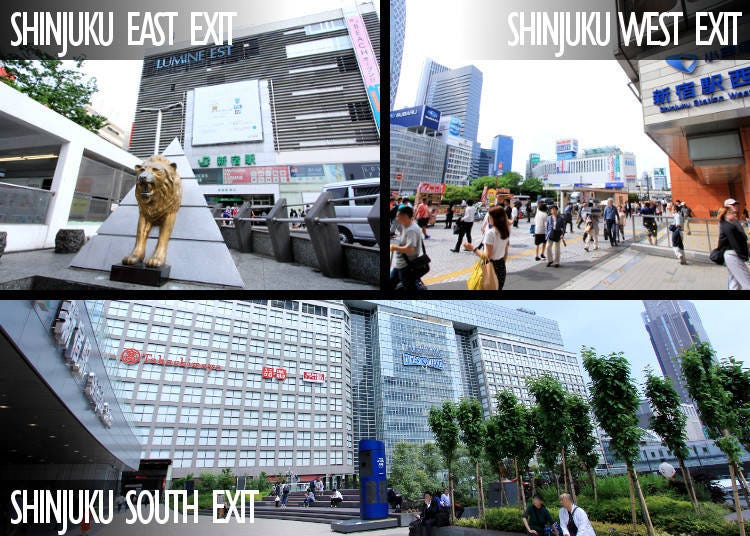 4) List of destinations for each exit of Shinjuku Station 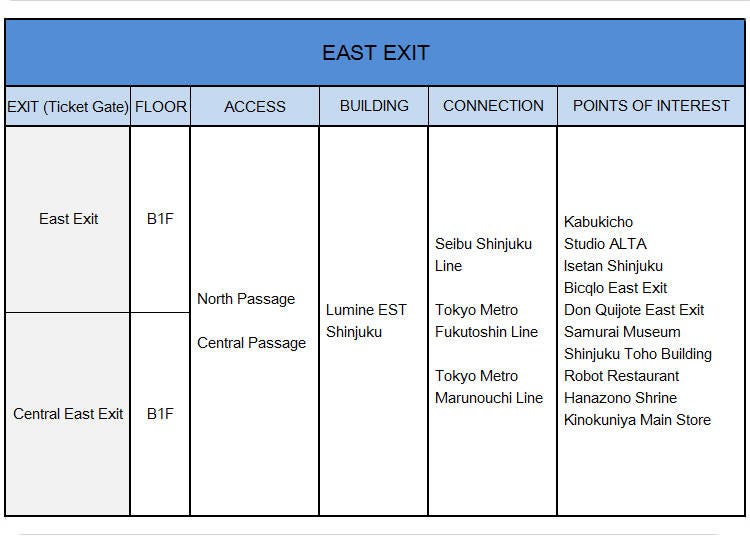 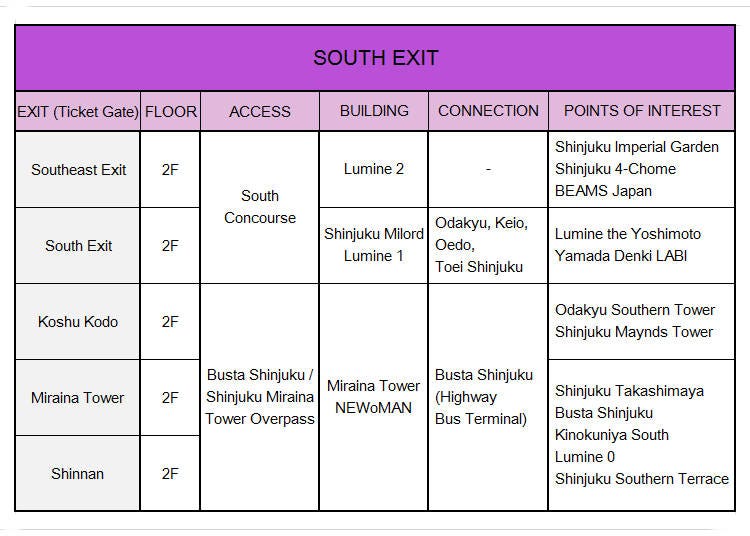 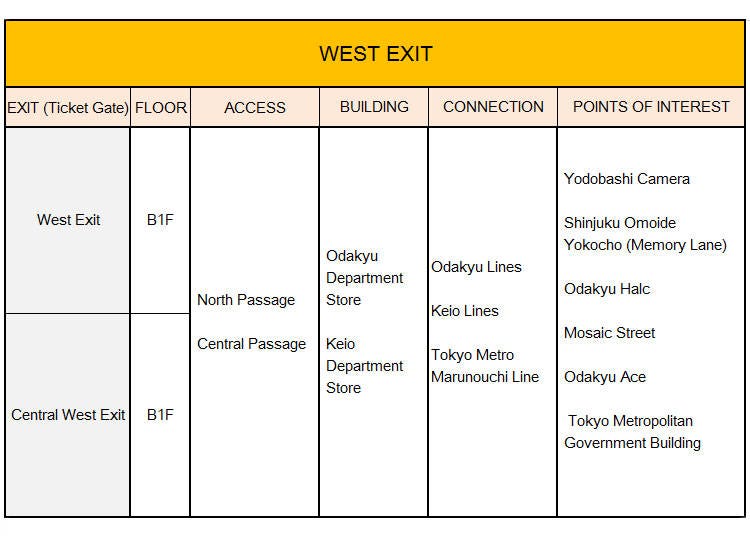 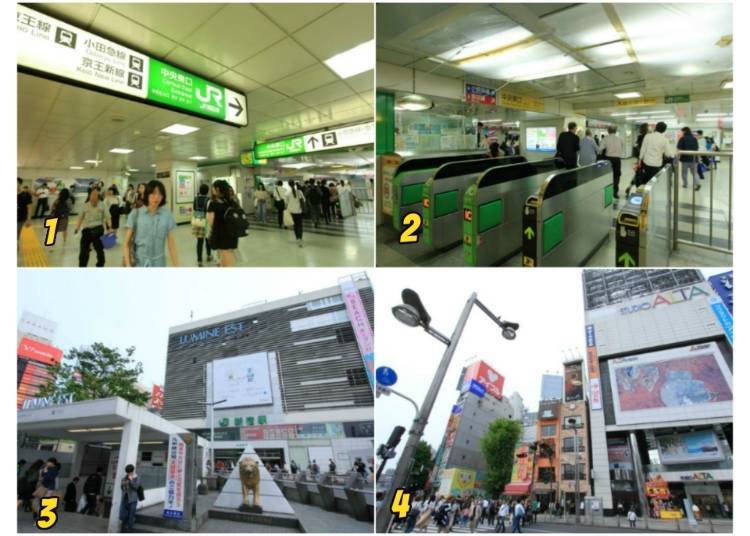 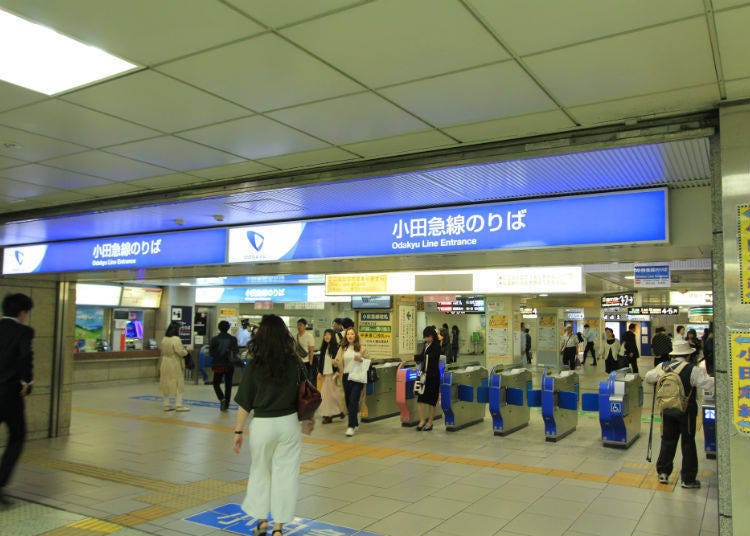 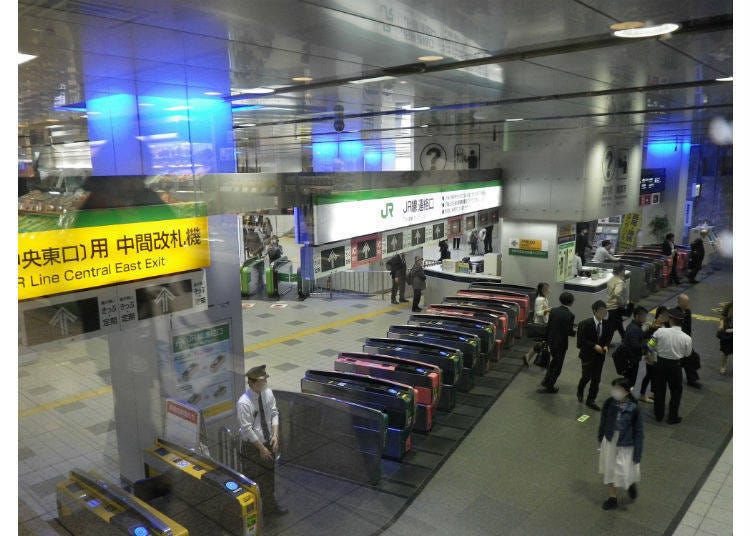 ■ How to get to the East Exit from the Tokyo Metro Lines
After passing through the ticket gate, use the A8 / A9 exit to get to JR East Exit and Central East Exit. Take exit B13 to get to Studio ALTA. 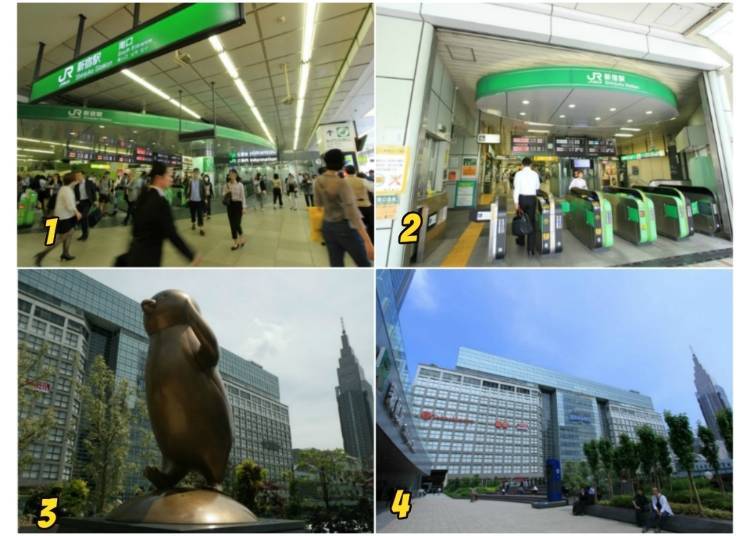 The South Exit of Shinjuku Station leads to the Koshu Kaido, or the Koshu Highway, with numerous exits leading to this very road.

In 2016, the South Exit got a lot more busy with the opening of both Busta Shinjuku, the largest high-speed bus terminal in Japan, and NEWoMan, a shopping facility targeting female shoppers.

■ How to get to the South Exit from the Odakyu Lines
Take the stairs at the southern end of the platform. On the second floor are the South Exit ticket gates. You can leave the station a little west of JR's south exit. 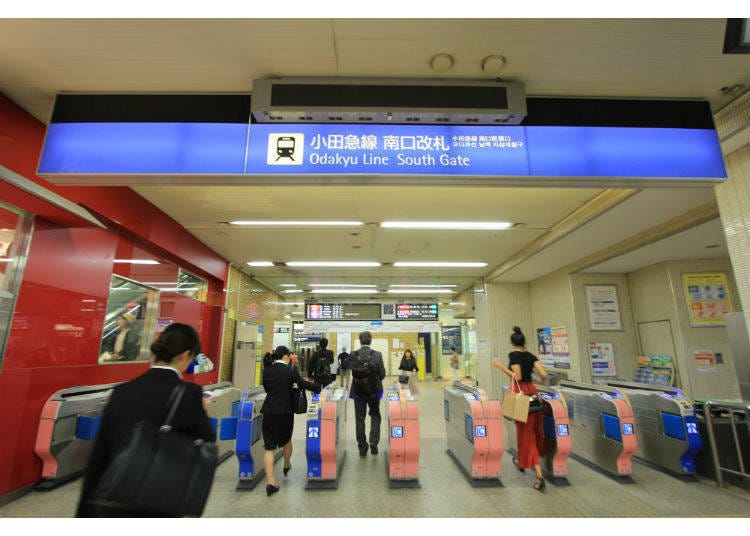 ■ How to get to the South Exit from the Keio Lines
Go up the stairs at the southern end of the platform to the ground level and use the Lumine Exit ticket gates. If you go up the stairs one more time, you can leave via the JR South Exit area for the Koshu Highway. 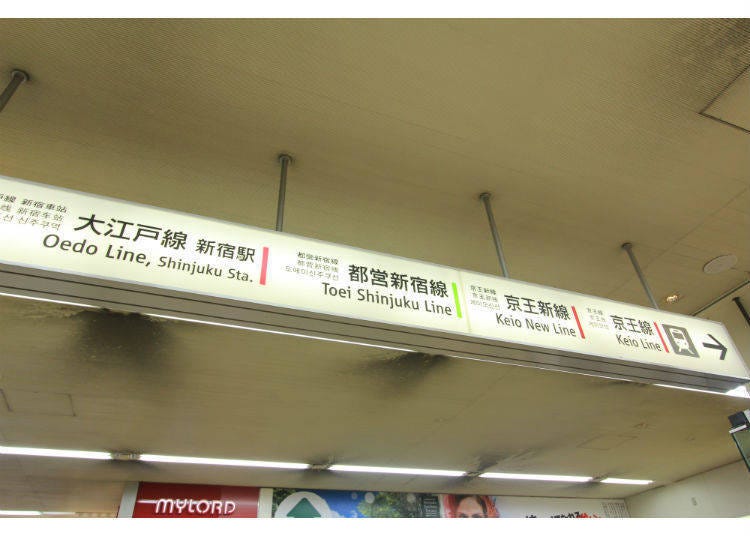 ■ How to get to the South Exit from the Tokyo Metro Lines
Take exit A9 at the JR East Exit, leave the station and head south. 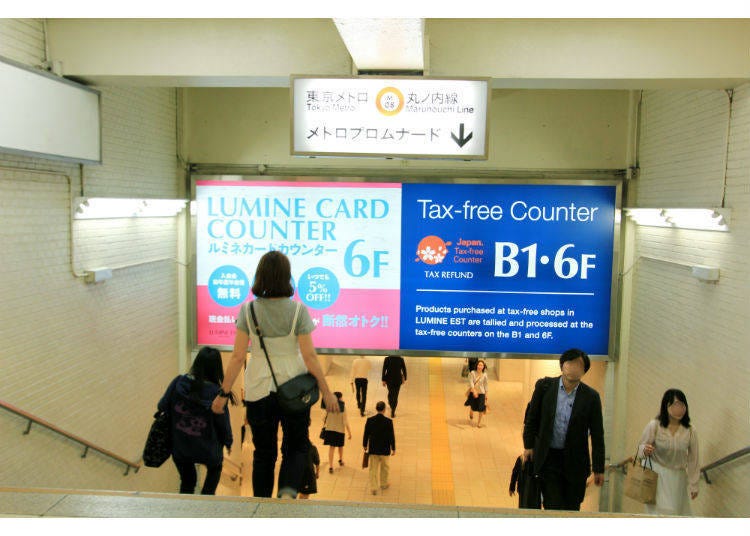 ↑the Tokyo Metro Marunouchi Line and the JR Station are connected by the Metro Promenade.

The Toei Oedo Line and the Toei Shinjuku Line are on the southwest side of Shinjuku Station. Transfer to JR lines, Odakyu lines, and Keio lines is possible with a short 5-minute walk via underground passages. 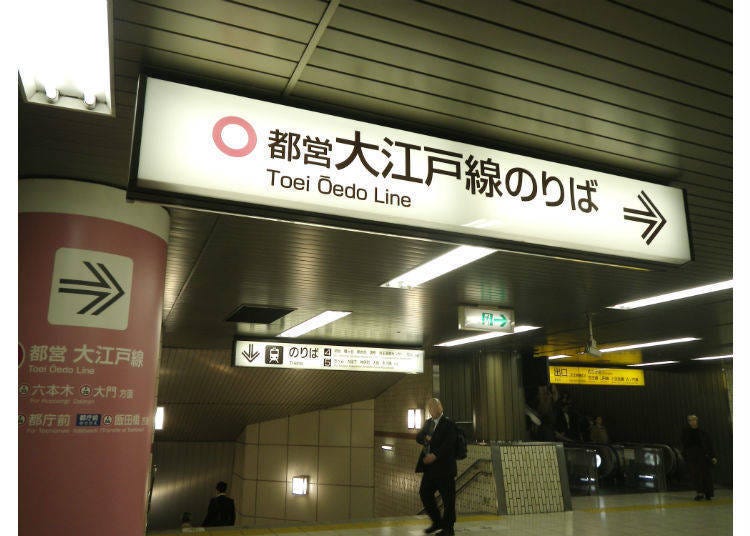 ↑Entrance to the Toei Odeo Line 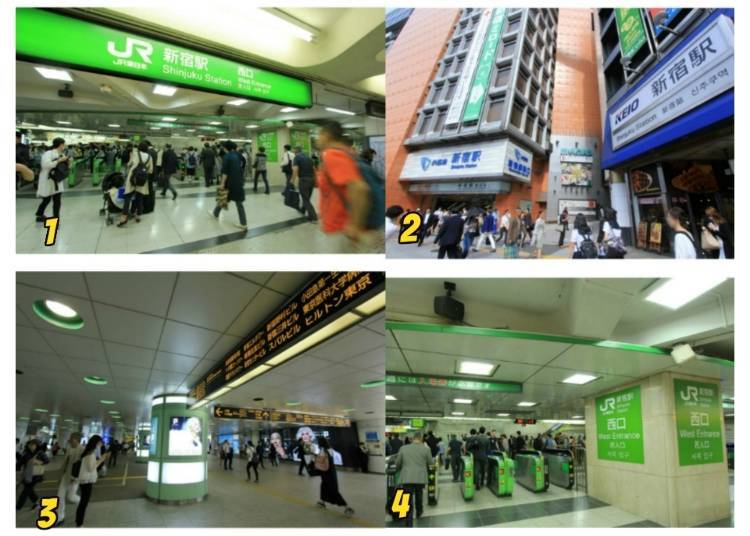 Shinjuku Station's West Exit is the access point to the many massive electronics stores and the Shinjuku of skyscrapers and government buildings.
The JR lines, Odakyu lines, Keio lines all have ticket gates facing the vast open space that is the Shinjuku Station West Exit Underground Passage.

■ How to get to the West Exit from the Tokyo Metro Lines
The exits A10 to A15 will lead you to the JR West Exit ticket gates and the Odakyu Department Store, while B16 / 18 are the most convenient exits for Odakyu HALC.

To get to Shinjuku's district full of large electronics stores, you need to walk around the big rotary at Shinjuku Station's West Exit. The best way to get there is via the West Exit Underground Passage.

As the station does seem like a maze at times, do make sure to keep an eye on the many helpful signs above your head. If you're lost, they'll make navigating Shinjuku Station a lot easier.

8) Going to Hakone and Mount Takao via Shinjuku Station

■ To Hakone
The best way to reach Hakone, a popular tourist spot near Tokyo, is by the Odakyu Limited Express Romance Car, which connects Shinjuku Station to Hakone Yumoto Station in about 85 minutes.

If you are transferring from the JR Line to the limited express Romancecar, if you already have a ticket for the Odakyu Line, or if you are using a SUICA or PASMO card, go West through the central underground passage of the JR section of the station, and, from the ticket gate named “Odakyu Line Passage Entrance,” enter the Odakyu section of the station and go up to platforms 2-3.

If you don’t have a ticket, get out via the JR South Gate at the South Exit Concourse in the JR section of the station, and go right. You will immediately see the south exit Gate on the Odakyu Line and an automatic ticket vending machine. 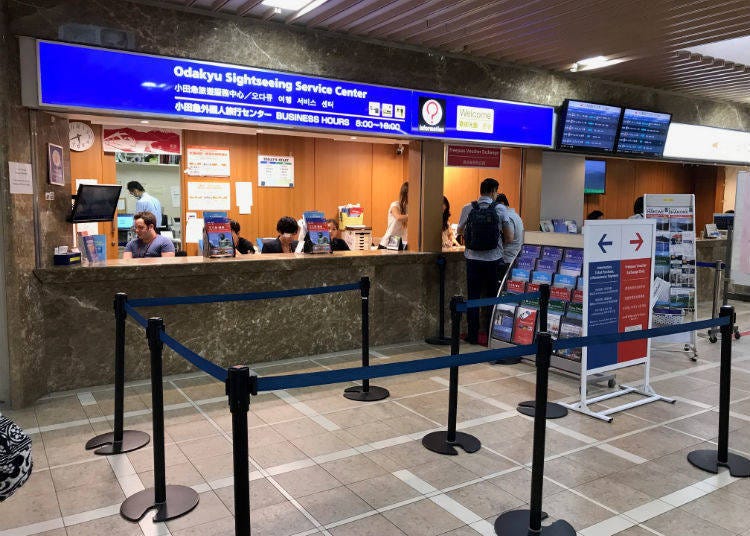 Coming from JR lines, follow the passage between the JR Central West Exit and the Odakyu Exit ticket gates to get to the Keio Line ticket gates.

If you don't have a ticket yet, you can find vending machines at the ticket gates. 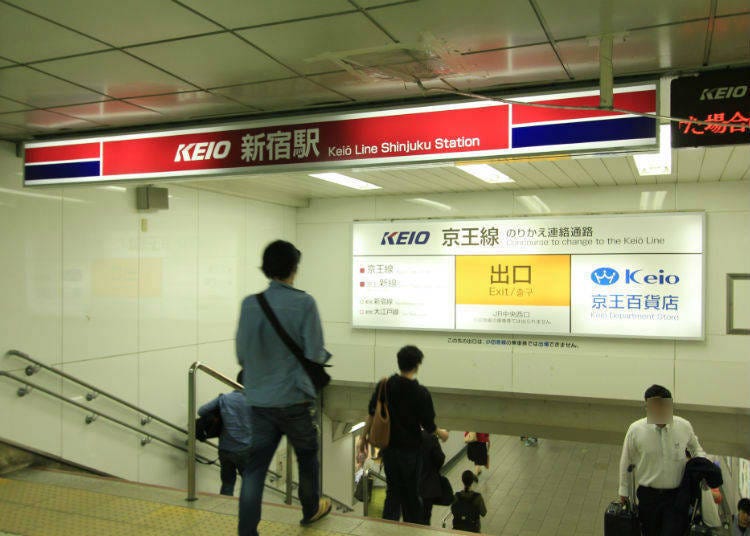 Although it’s a JR transfer, platforms 5 and 6 are located near the South of the station and are not directly connected to the North passage, the Central passage, and the South exit concourse, so they are a bit difficult to find.

Once you go through the southern end of your platform and go down to platforms 5 and 6 via the Busta Shinjuku/JR Shinjuku Miraina Tower Overpass, it may take about 10 minutes to reach the platforms, depending on which platform you are walking from. 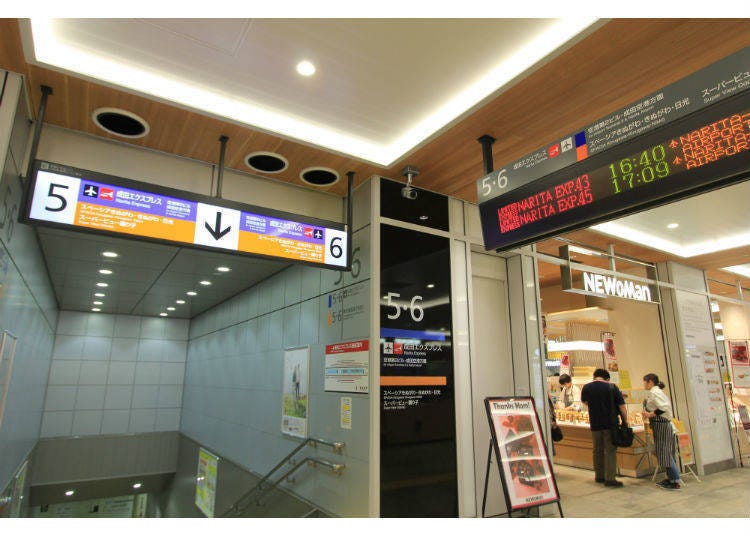 ↑the staircase at JR platforms 5 and 6

Before you go to Shinjuku Station, let’s master how to get to your destination!

Shinjuku Station, a sub-center of Tokyo, is a huge terminal station where many Japanese people get lost due to its complexity and large number of commuters. That is even more true for foreign tourists. Please refer to this article and plan your course in Shinjuku Station before visiting it.

*The information presented is accurate to the time this article was written (May 2017), with some edits and corrections.