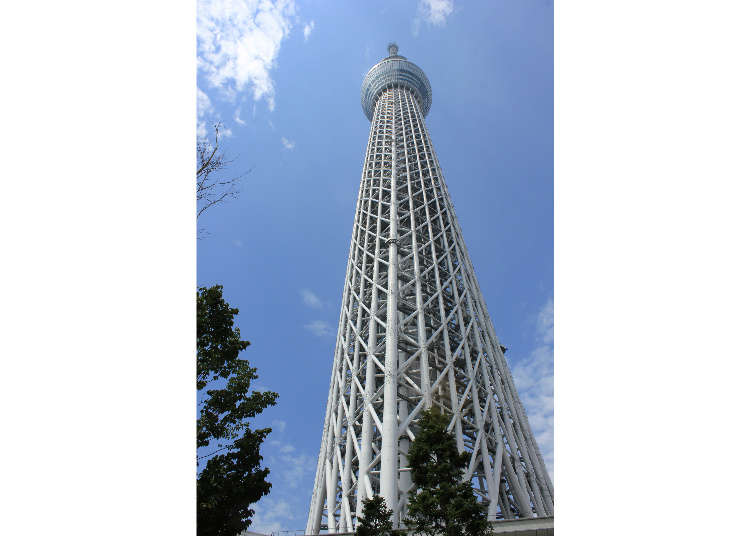 This is the first time coming to Tokyo for four students learning Japanese in China’s Guangdong Province. They’re headed to Tokyo Skytree(R), the tallest tower in the world at the time of their visit in August, 2017.

Before the Skytree was completed, Canton Tower in Guangdong where the four students go to school was the world’s highest. Have you all gone up Canton Tower?

Okay then! Let’s get a move on and see Tokyo from this amazing height.

Learning the Basics about the Skytree 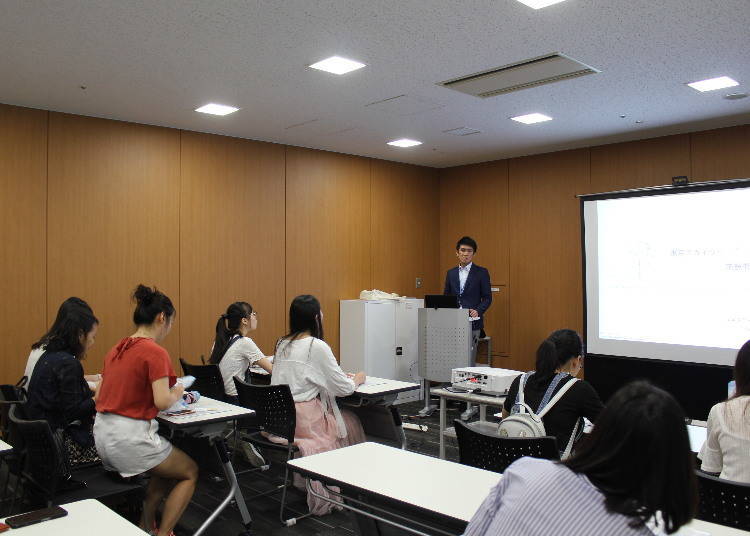 Before they go up to the observation tower, we have the students listen to a special talk about the Skytree. Kenta Suzuki, the head of the tourism division, is giving the talk. The students are looking at pictures and hearing about the special construction required to resist Japan’s frequent earthquakes as well as different ideas that went into the design of the tower.

Although much of the economic development in Tokyo has been concentrated on the west side, the Skytree was built as a symbol of encouragement in the eastern section of the city along with providing improved television signal with the increase in high-rise buildings. The tower was also built to help with communications during disasters as well as improving cellular signal. While the above-ground portion towers at 634 meters, the underground base is a mere 50 meters deep, yet it is built with the latest vibration-controlling design that can withstand high winds and earthquakes, and support the whopping 36,000 tons of weight of the tower. It’s said the builders also referenced the construction of the 5-storied pagoda, which while weak to typhoons and fires, was not affected by earthquakes.

“It’s amazing it was completed just a week after the Tohoku earthquake. I’m surprised it wasn’t damaged by the earthquake.”

“I knew it was a tourist attraction, but I didn't know that it was used for researching clouds and lightning, too.”

After listening to the talk, the students explore the unique exhibits in the area and take a close-up look at the braces supporting the Skytree. Everything they see here is pretty rare and there are a lot of worthwhile sights to take in before heading up to the top. 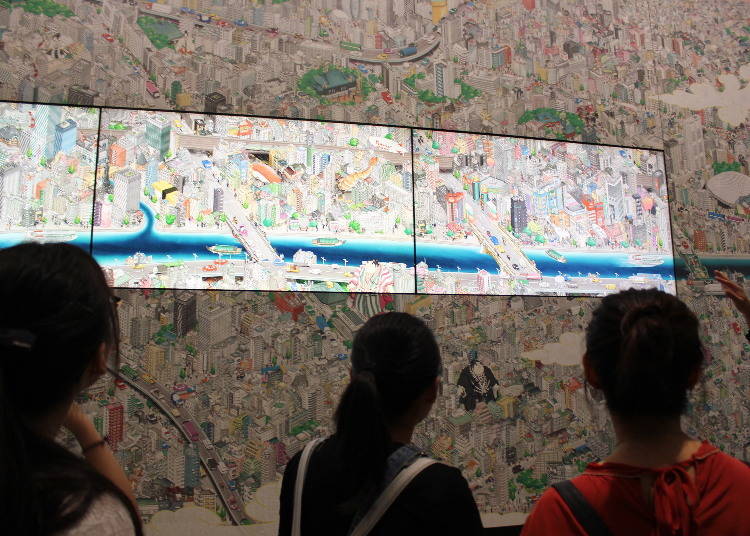 Next to the Sumida River, there’s...hand-rolled sushi?! 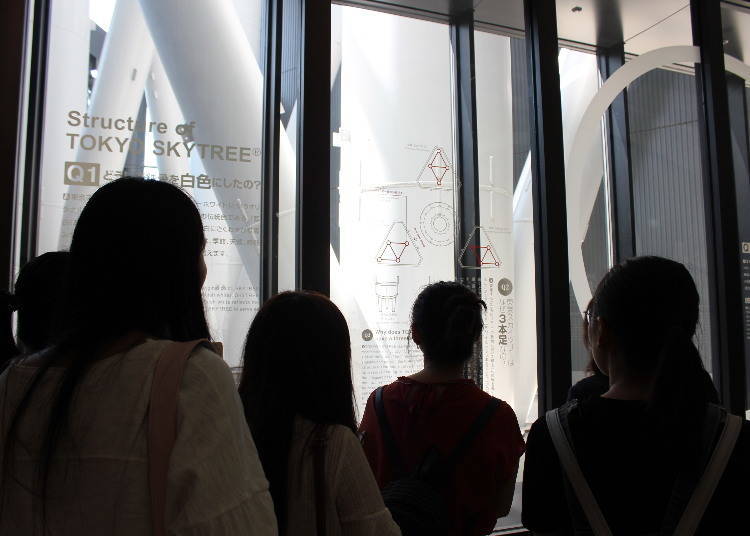 The beams are really big, but I still can’t believe they can support a 634 meter steel tower. 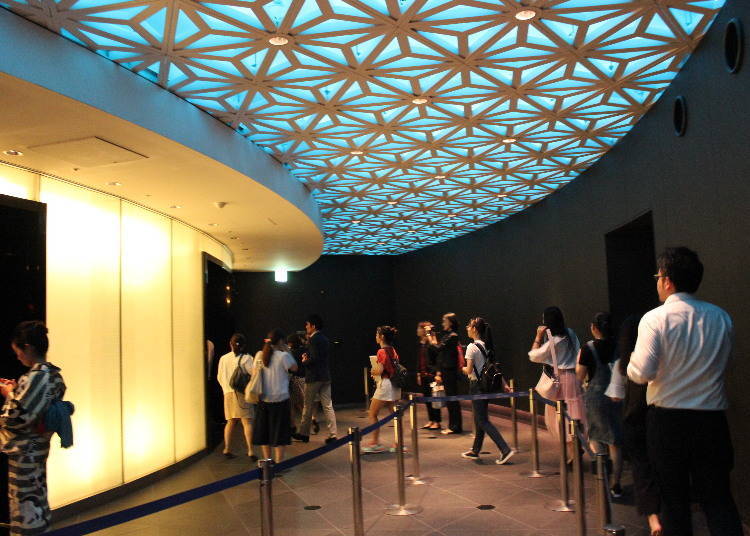 An elevator hall with a Japanese design. Each of the four elevators has its own design from one of the four seasons. The elevator the students ride has fluttering birds of winter.

Finally, the students head up 350 meters in mere seconds in the Tembo Shuttles.

“I can’t believe the elevator ride was only 50 seconds!”

It’s over in an instant, but before you know it, you’re far above the ground.

Finally Heading to a Height of 350m 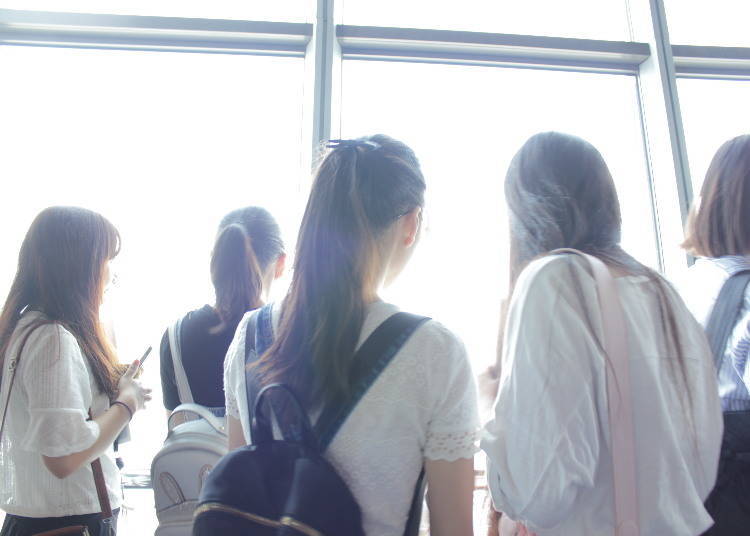 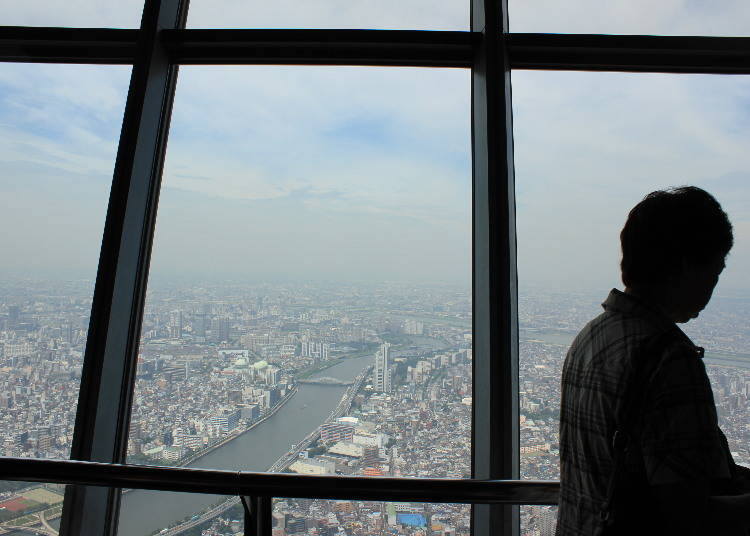 The Sumida River they looked at on the map is right in front of them.

Coming up to the Tembo Deck, the students participate in a stamp rally and take in the views. It’s amazingly high up, but perhaps because there are so many other tourists, it’s oddly not scary.

“What river is that? The Sumida? It’s the famous one from that Japanese nursery rhyme, right?”

Clearly she’s been keeping up with her Japanese studies. Right on the money. 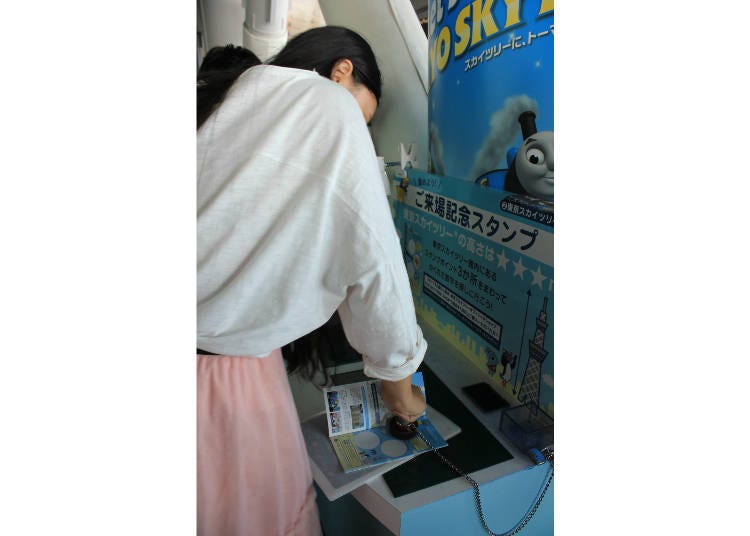 Let’s get a stamp to commemorate the visit.

“There are just so many buildings when you look around from above. You really feel you’re in the middle of a huge city.”

“It’s like the city is laid out right in front of us.”

“It looks like a toy city. I like how all the buildings are neatly in a row.”

After circling the observation floor once around, the students head up even higher. Now they’re climbing to a height of 450 meters. The four of them walk the 360 degree corridor, surprised that the building is designed so that not only can they look out the sides, but also diagonally downward toward the ground. 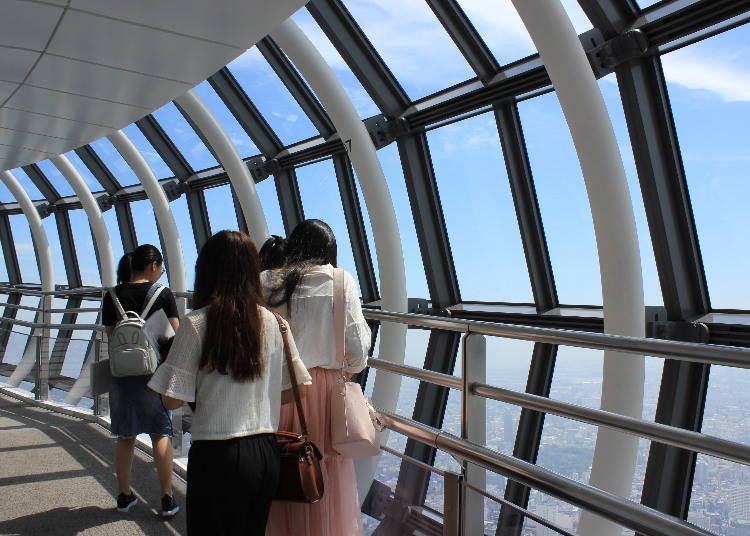 We’re closer to the sky! I’m kind of afraid to look down... 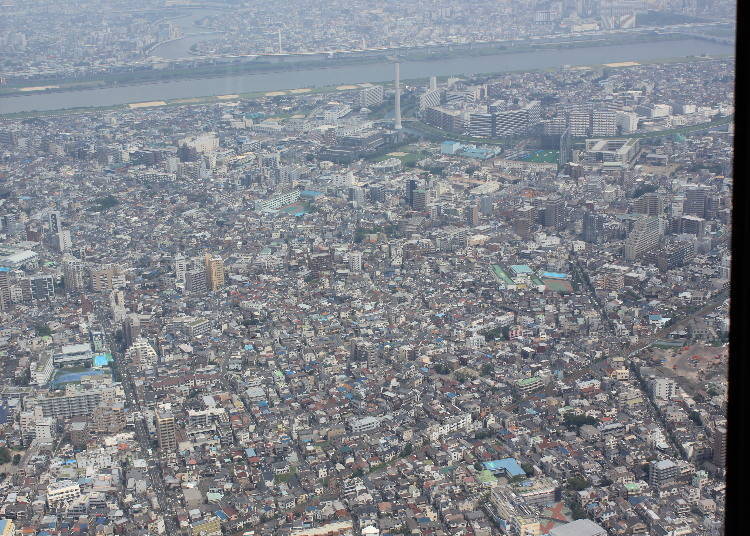 The river seems even farther away than at 350 meters.

“Looking down is a little scary after all.”

“What’s that building? The Ryogoku Kokugiba? You can watch sumo there, can’t you?” 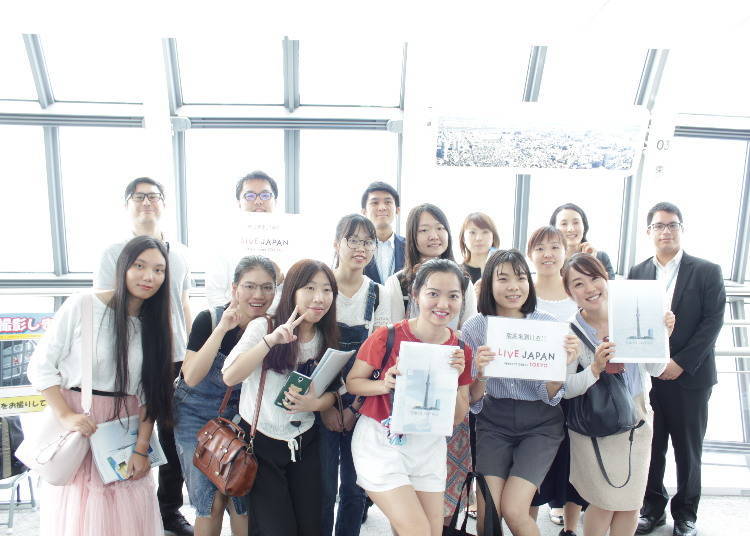 It’s right in the middle of summer vacation. There are displays with all the kids’ favorite Thomas the Tank Engine, and the little ones are running all around the observation floor. In the midst of the peaceful atmosphere where it doesn’t really feel like they’re so high up, what really surprises the students is the glass floor at the 340 meter level. 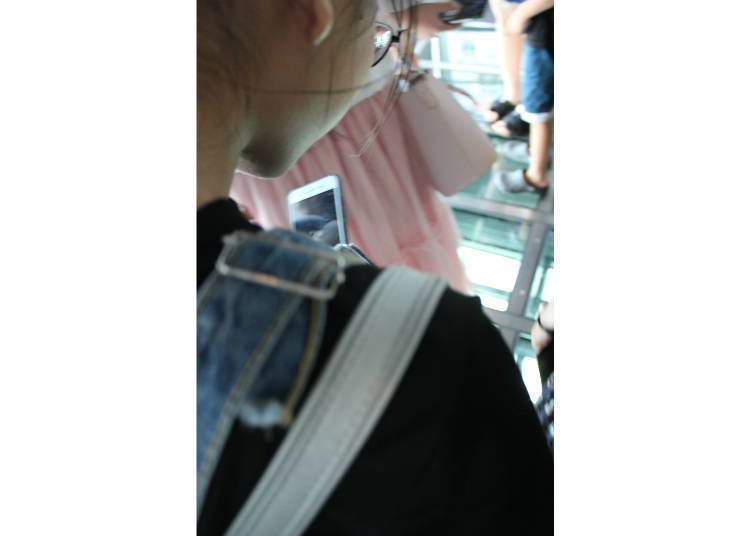 The flooring is made of reinforced glass and you can see straight from your feet all the way to the ground. Sightseers cautiously place one foot after the other to stand on the glass. Even just standing on the edge, looking down will give you the willies. Some people squat down on the glass. 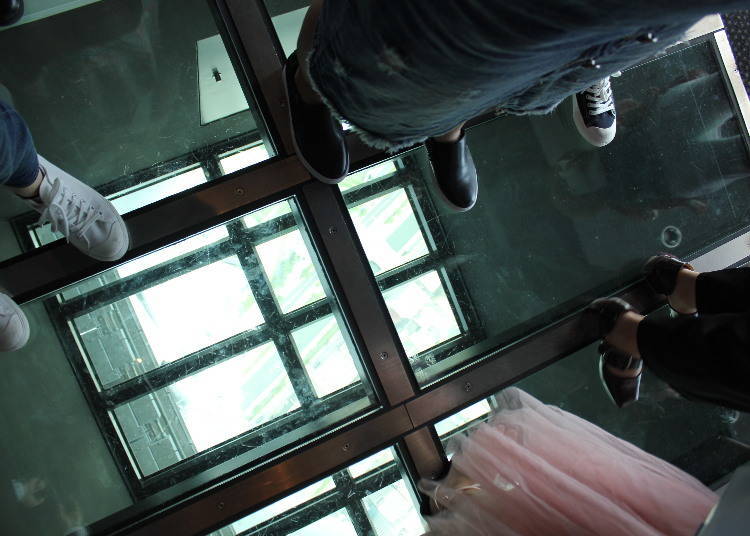 I can see everything! If I were afraid of heights, I wouldn’t even be able to get close! 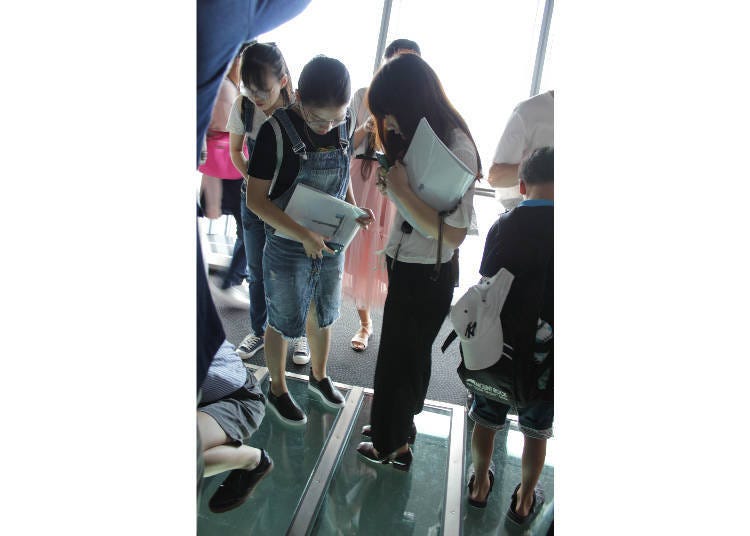 They get used to the view, but can’t quite summon the courage to move to the middle...

“But let’s take a picture!”

After heading back down in the Tembo Shuttles, they find all sorts of stores in the lower levels to buy souvenirs and more. The students are drawn to a display of toy foods that was being shown at that time. 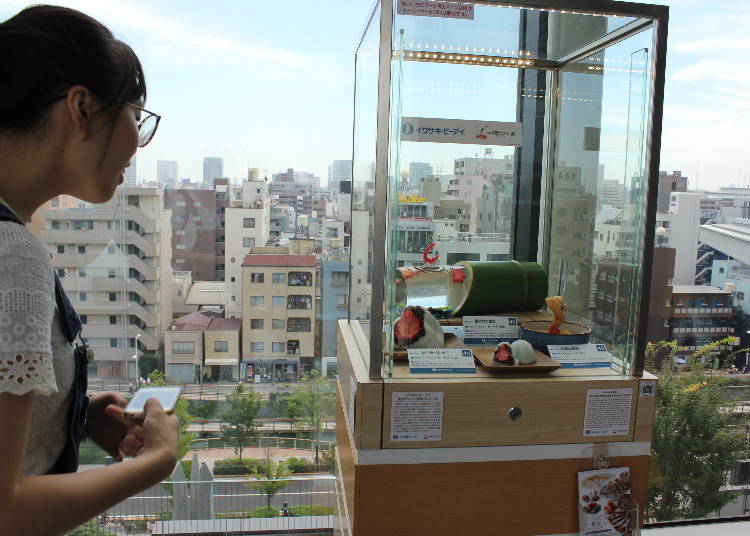 They exit the building and return to the world that just earlier they were observing from above. Looking back at the towering Skytree once more, the four of them take pictures of that amazingly tall tower. 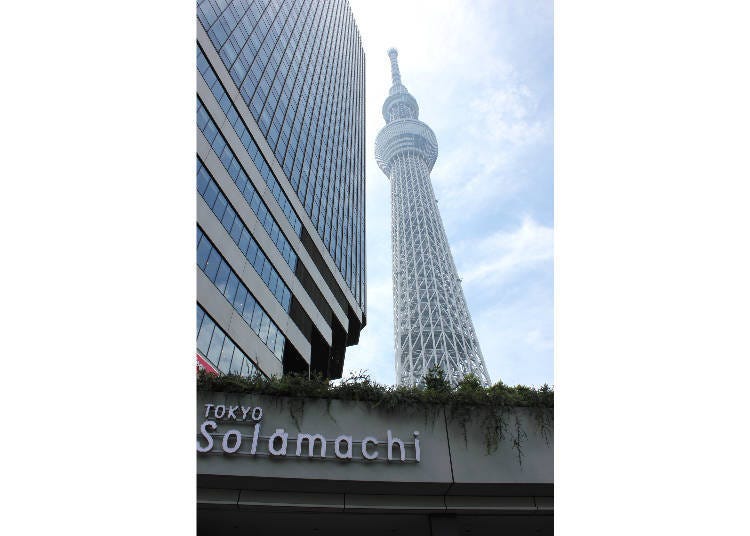 It really is super tall. 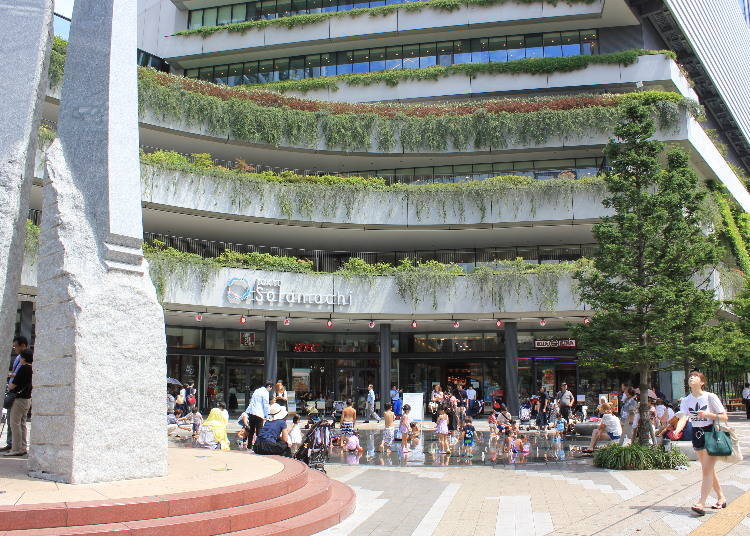 Children play in the water by the riverside entrance.

“Next time I want to spend more time looking at souvenirs.”

“I want to look in the shops and also see the aquarium that’s here.”

“It’s amazing they can build such a tall tower in a country with so many earthquakes.”

“I want to come back in winter because I hear you can see Mt. Fuji from here then.”

Although today they climbed the tower in midst of high temperatures and humidity, during dry days of winter you can see not only Mt. Fuji but the entirety of the Kanto region. Having returned to stand on solid earth, the four students look up once more at the tower and dream of returning in the winter.