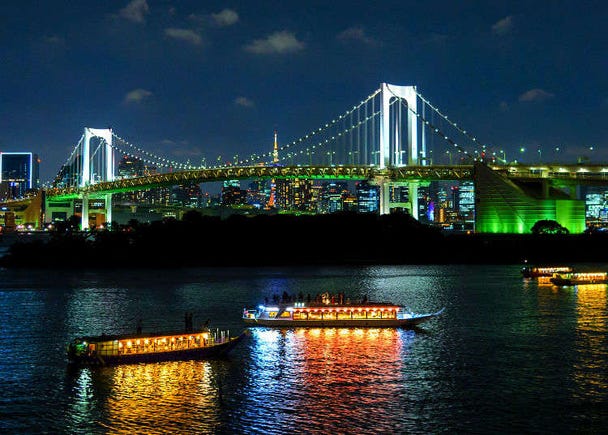 Boasting excellent access from central Tokyo (just half an hour from Tokyo Station), the artificial island of Odaiba offers a variety of exciting spots such as a theme park, museums, shopping malls, and hot springs. Especially famous is Odaiba’s stunning night view of Tokyo Bay, with the illuminated Rainbow Bridge and both Tokyo Skytree and Tokyo Tower twinkling in the distance. It’s a breathtaking panorama of city lights, best enjoyed after spending a fun day of sightseeing on Odaiba! We’ll take you to the island’s very best night view spots to make the most out of your Tokyo evening!

1) Daiba Park: Rainbow Bridge and the Heart of the City, the Most Popular Night View 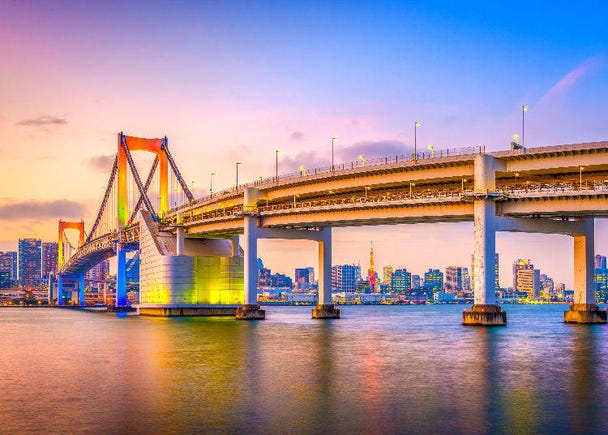 Sunset dyes both the sky and the city in a soft orange. 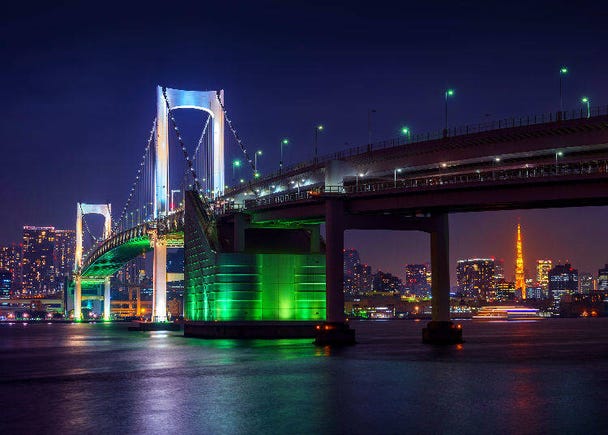 The iconic scenery of Rainbow Bridge with central Tokyo in the background. 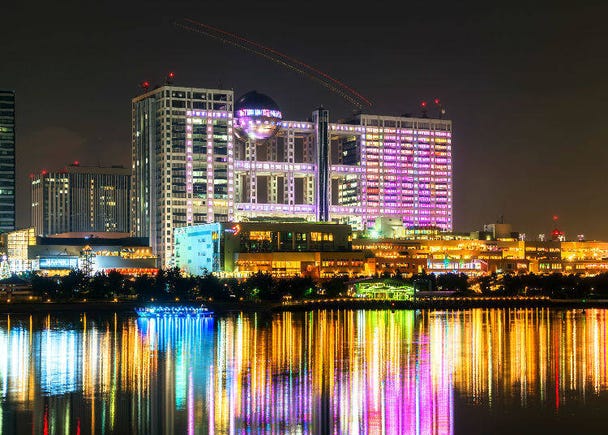 Odaiba sparkles at night, seen from the south side of Daiba Park.

Daiba Park is Odaiba’s most historic spot and one of the island fortresses that the Edo Shogunate built to protect Edo (old Tokyo) from invaders. It’s a 10-minute walk away from DECKS Tokyo Beach, an amusement spot especially popular for its barbecue. Daiba Park boasts a beautiful view that is thoroughly unique to the island, featuring the sparkling city lights and Rainbow Bridge on its north side while Tokyo Bay and Odaiba sprawl in front of you on the south side. No matter what time of day, the park and its iconic view are always a sight to behold and one of Tokyo’s most representative.

2. Aqua City Odaiba Shrine: Gazing Down from a Shrine on Top of a Shopping Center 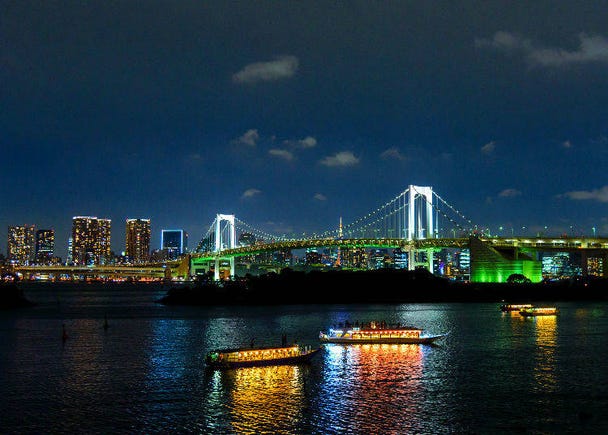 The Shinto shrine on top of the massive shopping mall Aqua City is somewhat of a secret tip. It can be found on the seventh floor of the mall, right on the rooftop, and is one of Tokyo’s ten major shrines dedicated to a branch deity of the Ise Shrine, with the main one being Shiba Daijingu Shrine in Minato. From there, look down on Rainbow Bridge in front of the sprawling lights of central Tokyo and find yourself getting lost in the mesmerizing view. The shrine is also said to grant seven wishes, such as prosperity in business, good health, and so on, so why not buy a omikuji (a fortune) for 100 yen and get a glimpse of what the future holds? With its romantic atmosphere and beautiful view, Aqua City Odaiba Shrine is also one of Odaiba’s most popular date spots. 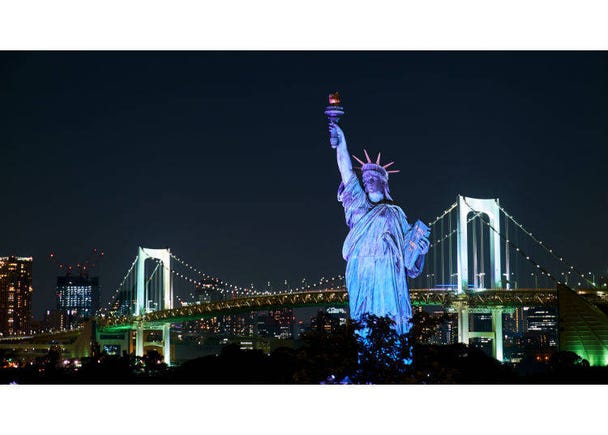 Lit-up after sunset, the statue looks quite different at night.

Just below the observation deck of the Symbol Promenade Park stands a replica of the Statue of Liberty, 11 meters tall and weighing about 9 tons. To commemorate the “French Year in Japan” in 1998, France’s own Lady Liberty from the Île aux Cygnes came to Japan until 1999. Once the French one had returned home, Tokyo set up a replication of it with France’s blessing because Tokyoites had grown so fond of the statue. It was unveiled in 2000 and has become one of Odaiba’s most recognizable symbols where you’ll always spot people taking commemorative pictures.

4. The Center Promenade: Colorful Illuminations Light up the Night 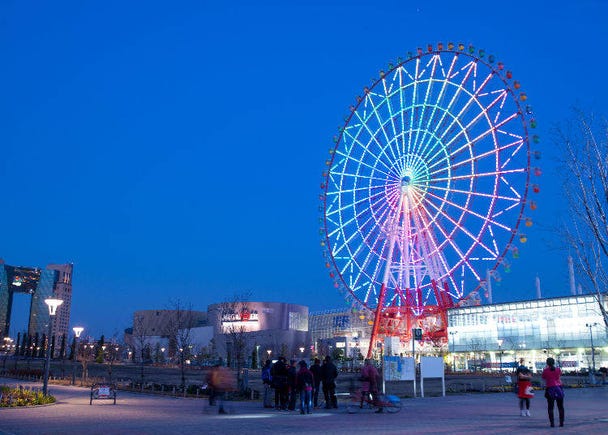 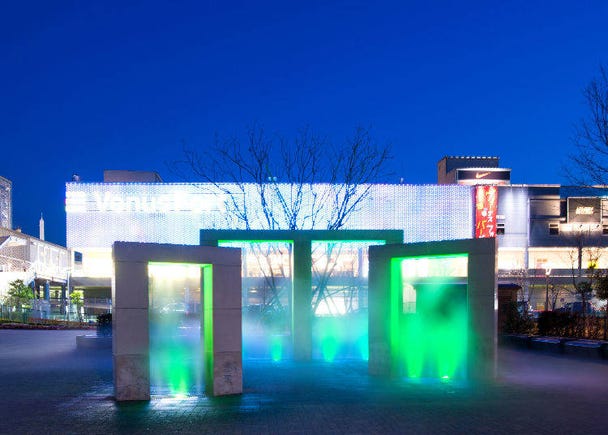 Even the modern art pieces on Center Promenade look different during the night. 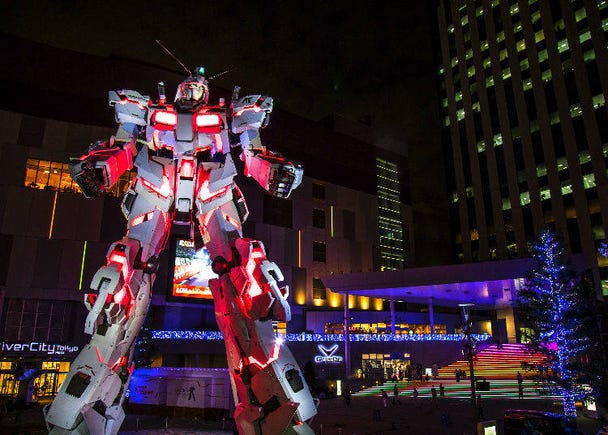 The lit-up Gundam Statue, a highlight not only for anime fans (as of August 2018, ⓒSOTSU・SUNRISE)

The Center Promenade connects Aomi and its Palette Town to Ariake and Tokyo Big Sight, leading you right across Odaiba. It’s surrounded by greenery, seasonal flowers, and plenty of water, with a variety of shopping malls and other entertainment spots to be found on either side. It’s also often the venue for food festivals, sports events, and flea markets. On sunny days, you might even be able to see Mount Fuji in the distance from Deai Bridge and Yumenoo Bridge. Every spot on Central Promenade is lit up after sunset, creating a wonderland of colorful illuminations and a dreamlike atmosphere. The many twinkling, colorful lights are one of Odaiba’s most popular night views. 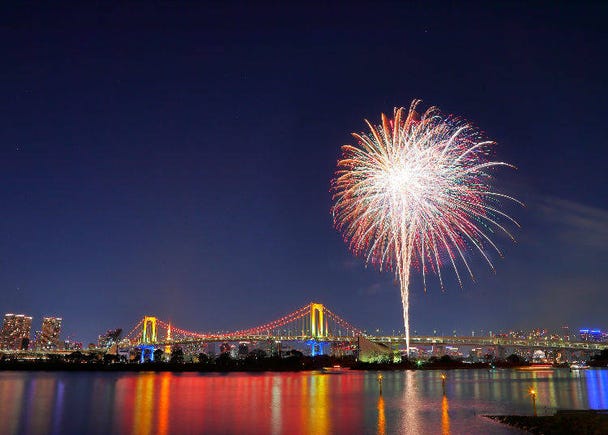 Odaiba Marine Park sprawls right in front of Decks Tokyo Beach and Aqua City Odaiba, offering an oasis of calm on the modern island. Next to various fun activities such as shell gathering and windsurfing, the park also offers what is possibly the most iconic view of Rainbow Bridge and the Odaiba Statue of Liberty. Especially stunning is the transition from sunset to night and the park is the place to go for events such as the Odaiba Rainbow Fireworks and the Tokyo Fireworks Festival. The plethora of colorful cruise ships sailing peacefully right in front of Rainbow Bridge is a symbol of Tokyo, so do not miss out on this amazing panorama.

The Top 9 Things to Do in Odaiba (Daiba), Tokyo
Hotels in Odaiba: Enjoy Tokyo’s Popular Island with Fun and Fanciness!
*This information is from the time of this article's publication.
*Prices and options mentioned are subject to change.
*Unless stated otherwise, all prices include tax.