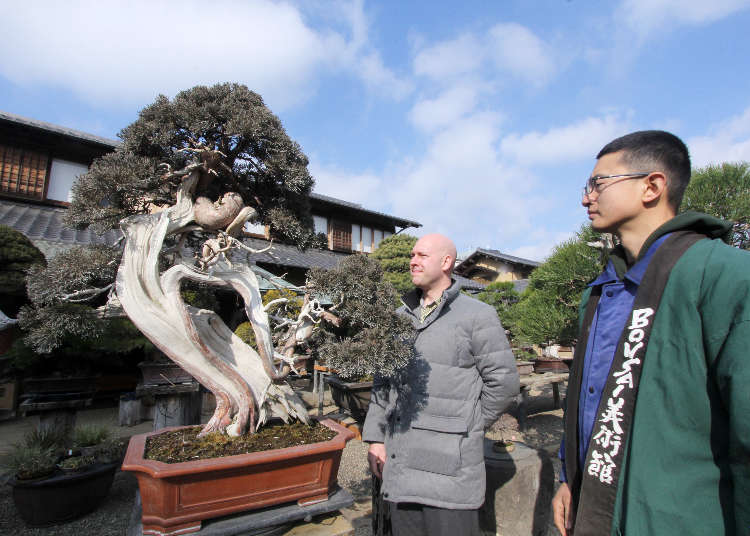 Million-Dollar Bonsai!? How To Tell A Bonsai Legend Apart

Bonsai is one of those things that is so closely linked to Japan, you cannot think of one without the other. The little trees are strangely beautiful and fascinating, enjoying admiration by professionals and hobbyists all around the world. The price for a proper bonsai can be anywhere from a few hundred dollars up to one million for the extremely high-grade plants. That’s an astonishing amount of money and even the vast majority of Japanese people aren’t able to tell a regular bonsai from a million-dollar one. To explore the vast world of bonsai further and find out the secret of such expensive trees, we had to dig deeper and visited Shunka-en Bonsai Museum in Tokyo. 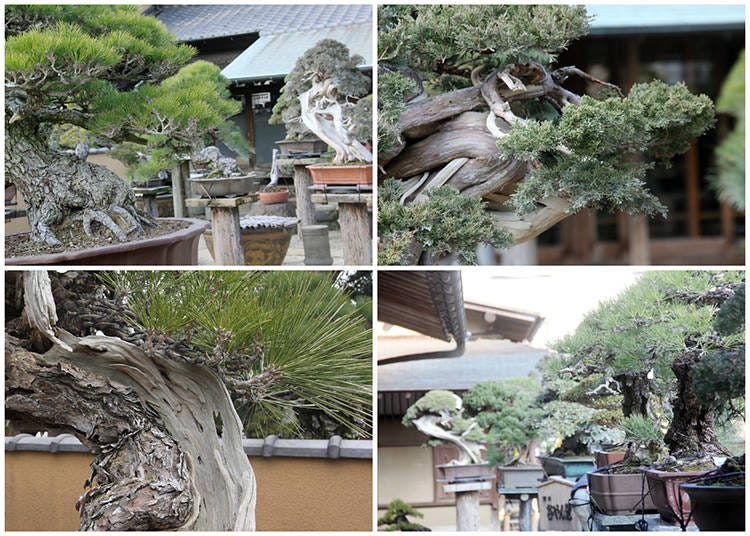 Bonsai refers to a Japanese gardening technique that revolves around planting the cutting of a tree or other source material plant in a pot. Then, it is cultivated and shaped, with the ultimate goal being to create a real-looking, tiny landscape for indoor decoration.

A bonsai can be made from all sorts of source material, but some of the most commonly used plants include pine, Chinese juniper, Japanese apricot, Japanese cherry, maple, the satsuki azalea, and more. Bonsai is an art that is centuries old, shaped and passed down by various experts and enthusiasts throughout the generations.

The Black Pine Bonsai Challenge: Which One Costs One Million Dollars? 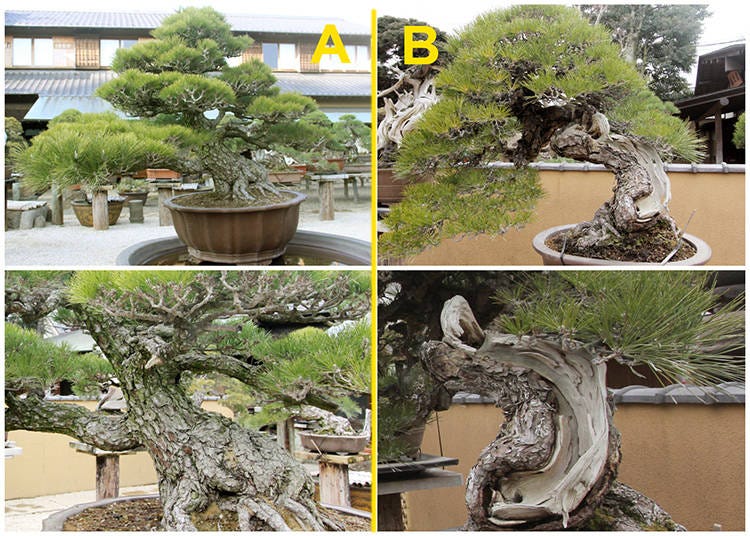 Now, let’s take a closer look at the miniature trees.
One of these black pine bonsai is worth one million dollars, while the other one ranges (“only”) around $122,000. Are you able to guess which one the one-million-dollar bonsai is? Black pine is one of the most common source materials used for the miniature trees, by the way.

We asked our resident editor, Timothy, to take the bonsai challenge. He tried to prepare himself as best as possible beforehand, but will he be able to correctly identify the bonsai? 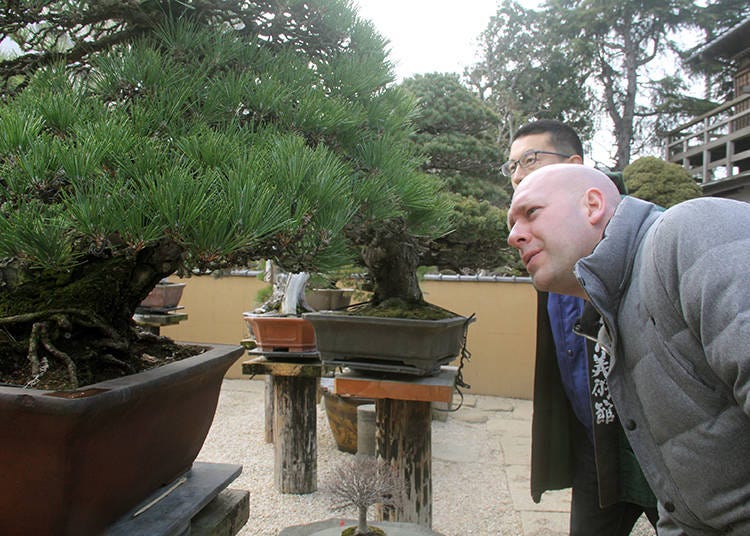 Timothy is Sure: That’s the One! 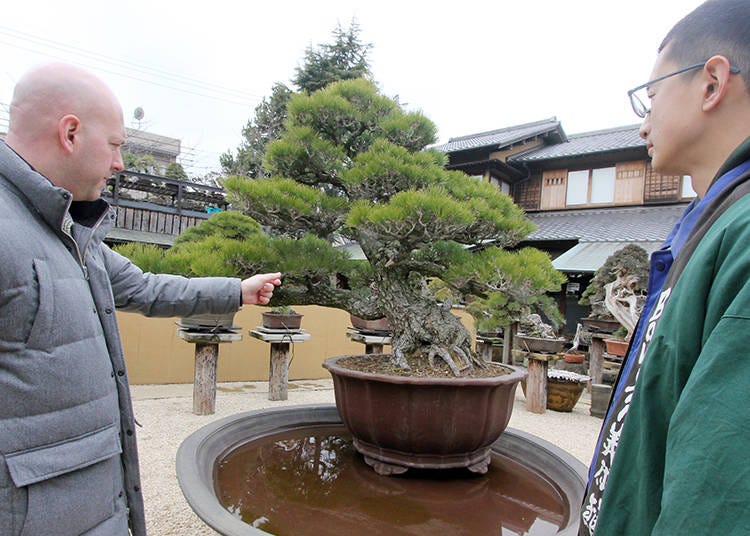 He takes 10 minutes to properly examine the plants, pacing back and forth between them. In the end, Timothy makes a confident choice and points to Bonsai A: “This one has a thick trunk and the way it stretches to the side looks especially majestic. This one must be old.” Then, the bonsai pro reveals the answer...

...and the Million-Dollar Bonsai is B! 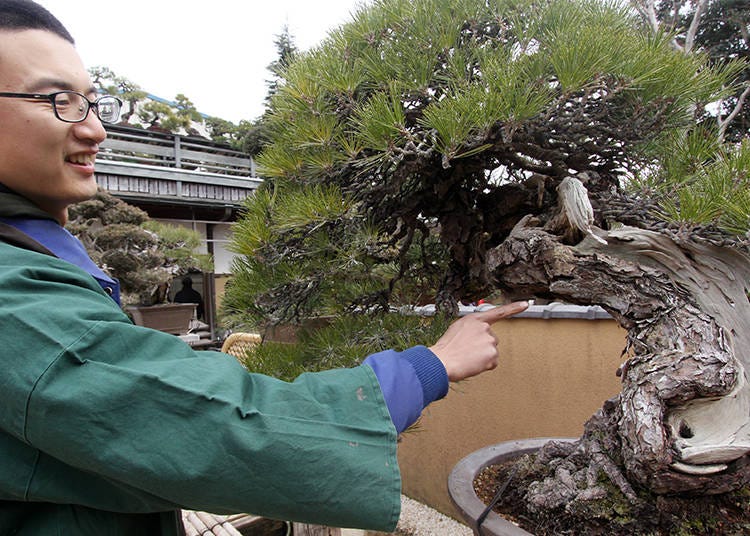 The correct answer was actually B! We asked Jin-san, a bonsai pro who works at the Shunka-en Bonsai Museum and tends to the visitors with answers, explanations, and all sorts of interesting stories about the miniature trees. How can you determine a bonsai’s value? What are the main factors?

Miki, the trunk: a large portion has become dead wood, expressing the rawness of nature over the long years (1, 2 on the image below)
Edajun, the branch lineup: this technical bonsai term refers to the tree’s branches lining up in order. Here, they grow at a slight downward angle from the trunk and boast a nice balance, looking very natural overall. (3, 5 on the image below)
Nebari, the root spread: the roots spread above the soil while connecting firmly and strongly with it underneath. (4 on the image below) 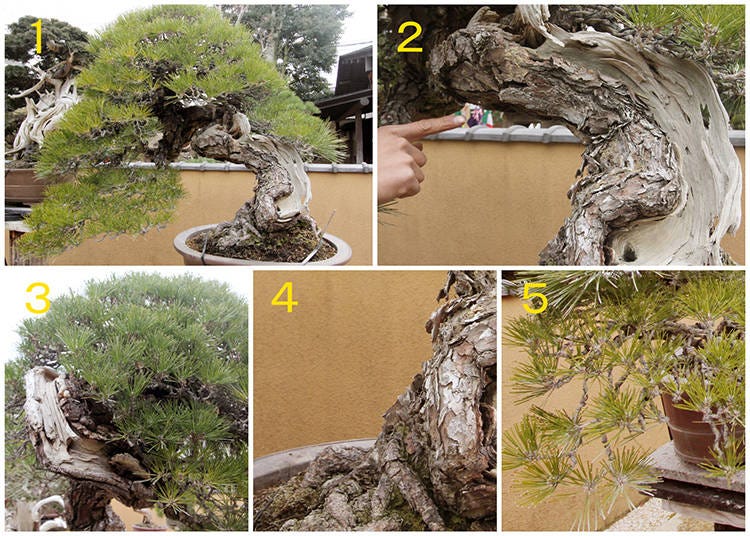 In the end, it is important for a bonsai to appear like an ancient tree growing amidst nature, shaped and formed to last by the elements. Incidentally, Bonsai B, which is worth one million dollars, boasts an age of about 500 years, while Bonsai A ($122,000) is about 200 years old. 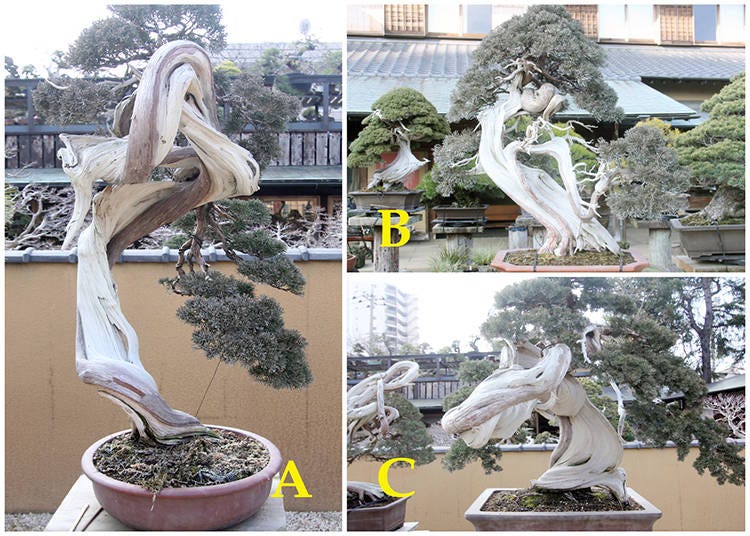 Another popular bonsai variety is the Chinese juniper, which is our next bonsai challenge. The pale, almost white trunk and branches are one of its main characteristics. Look at the photos above and try to rank them by value, from highest to lowest. 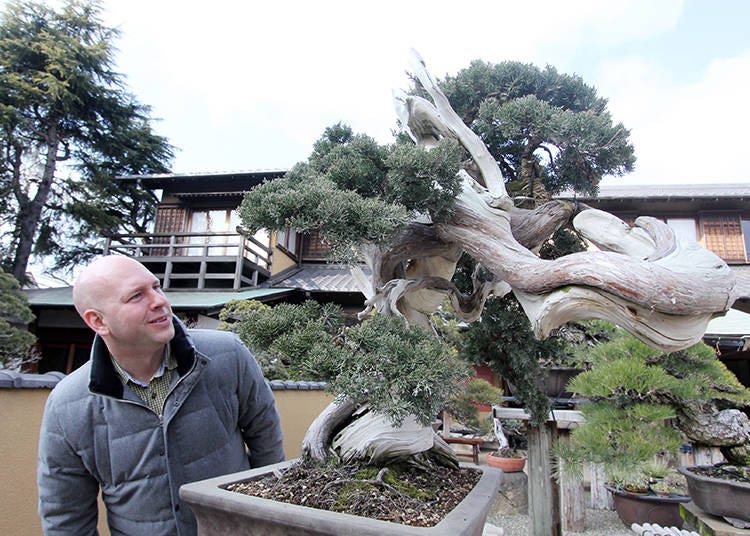 This is Timothy’s Top Bonsai Pick! 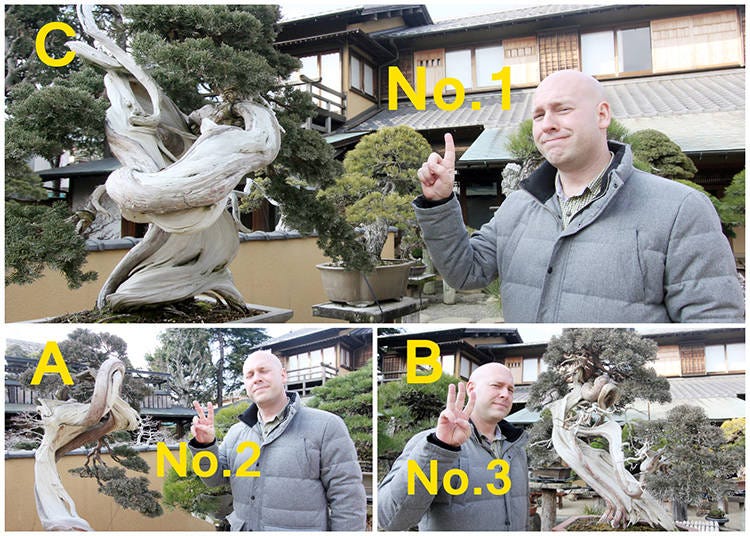 Timothy’s ranking is as follows. First place is C, second place is A, and third place is B.

“C’s trunk is twisted in an intriguing way and it seems quite old. A is small but its shape is unique, so this uniqueness might be valuable. B also looks quite expensive but is still somewhat regular in appearance.” 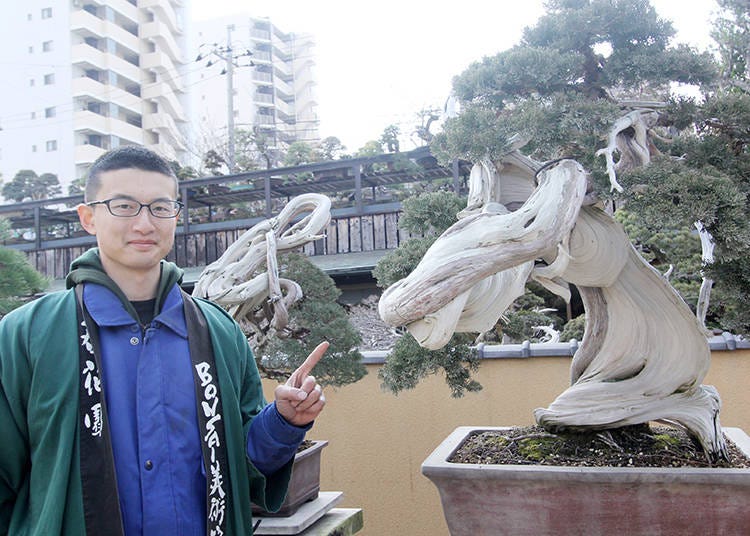 And his choice for the first place is correct! However, he got second and third place wrong: those two are the opposite. According to Shunka-en Bonsai Museum’s Jin-san, the important points for a Chinese juniper is the shari, which is dead wood under the bark, revealed once the bark is gone. It twists and tangles with the living part of the trunk called mizusui, evoking the image of “the presence of both life and death.”

1st place – over $750,000
・It resists the harshness of its environment and the elements around it, evoking an image of a force of life. The twist of the living trunk highlights this bonsai as a masterpiece.
・Age: about 800 years

2nd place – about $280,000
・Although it boasts beautiful shari and ochi’eda, “falling branches,” it is not quite enough to twist the living part of the trunk.
・Age: about 500 years

3rd place - about $16,000
・The trunk beautifully displays the characteristic of the Chinese juniper, but the living part of the trunk is thick and lacks intensity.
・Age: about 120 years 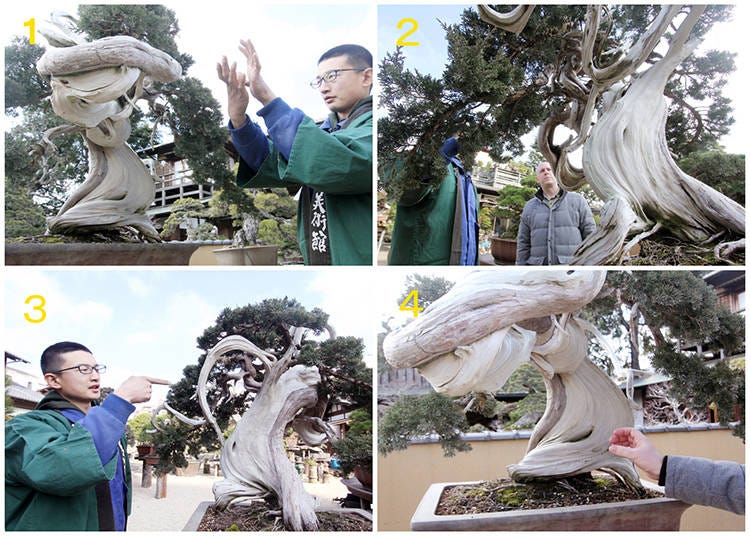 1) and 2) The living and dead part of the tree is clearly separated while twisting dramatically 3) The branches are bent and features beautiful “jin,” bare, dead parts of the branches 4) Estimating the tree’s age based on the annual tree rings of a branch

The Bonsai Catalog: What are the Best Trees for Bonsai? 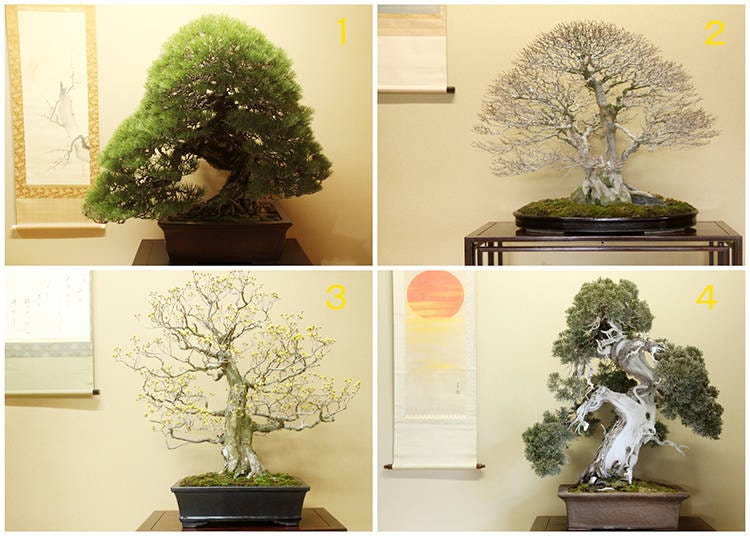 1. Kuromatsu, black pine: the bark is grayish-black and thick, and it is one of the most popular bonsai varieties. On the photo you see the masterpiece called Shokaku, its shape is reminiscent of a wild eagle spreading its wings. At age 600, it’s valued at almost 1 million dollars.

2. Kaede, maple: a deciduous variety; its small, filigree trees grow densely on the branches. Summer clads it in a fresh green, while autumn drapes the bonsai with vivid colors. The Japanese writer Yasunari Kawabata loved this tree. The one on the photo is 300 years old.

3. Sanshū, Japanese cornel dogwood: the cornel also belongs to the deciduous trees and is known for the small, yellow flowers that blossom in early spring. In autumn, red fruits sprout from its branches. The one on the picture is 180 years old.

4. Shinpaku, Chinese juniper: the juniper is an evergreen shrub that enjoys a lot of popularity as a bonsai variety. The twisting white trunk and branches give it a somewhat antique look. The one on the photo is a masterpiece by Kunio Kobayashi, called Seifu. It’s 450 years old. 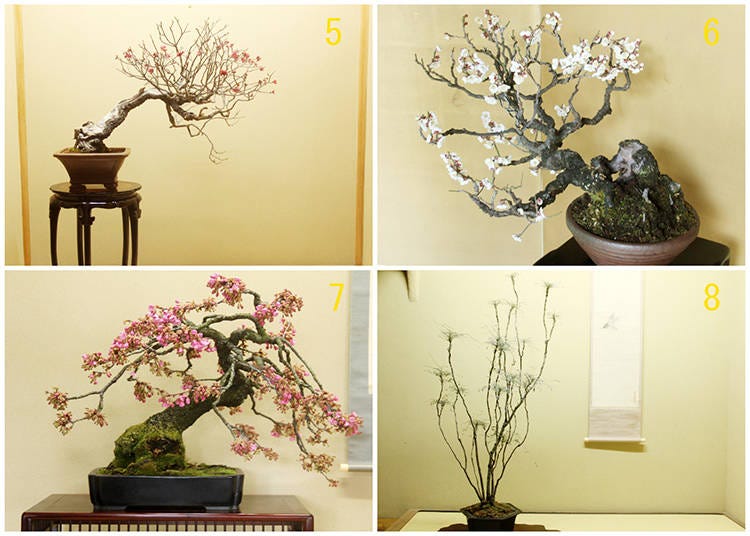 5. Hibai, Hibai Japanese apricot: its main characteristic is the trunk, looking lively and as though it were in motion. It blossoms in a vivid pink in early spring. The one in the picture is 60 years old.

7. Hikanzakura, Taiwan cherry: with its small leaves and flowers, the Taiwan cherry makes for an excellent bonsai. It sports vivid pink flowers around February. This one boasts an age of 100 years.

8. Kinshi nanten, thin-leaf nandina: this is one of the classical gardening plants that was extremely popular during the late Edo period. Its main characteristic is the thin leaves that almost look like single threads. It is 80 years old.

※All photos were taken at the end of February at the Shunkaen Bonsai Museum. They’re in no particular order.

Kunio Kobayashi On the Value of Bonsai

Kunio Kobayashi is the man who runs Shunkaen Bonsai Museum and one of the most important people when it comes to bonsai evaluation and assessment.
“A bonsai’s value is about being able to feel a sense of ‘dignity’ from the entire tree. When you stand before a bonsai, ask yourself just what this ‘dignity’ is as you refine your sense of beauty. Apart from bonsai, it is also important to appreciate paintings and other masterpieces.

During the Meiji Period, Kakuzō Okakura, a master of Japanese art, left us the words: ‘All accomplishments are like chasing eternity.’ All artistic activities are like pursuing a sky without limit. By studying one another, the artist and the viewer create an artwork reflecting their era. I want you to judge the value of things like you would judge the value of a bonsai. What is the difference between a nameless tree in a forest and a bonsai? The shape is changed by human hands, it is watered for a generous period of time. What will you feel in this continuous life?”

Q1 – How much are bonsai trees?
A bonsai’s price ranges from about $100 to several thousand dollars, up to one million. There are also miniature bonsai that can be had for $20-30, those can be enjoyed more easily.

Q2 – Can I buy bonsai as a souvenir?
Shunkaen Bonsai Museum sells bonsai to tourists and international visitors. The circumstances depend on the country you’re from, so please contact us if you are interested in a purchase.

Q3 – Can you grow your own bonsai?
A bonsai needs to be planted, watered, and groom, but everyone can grow their own bonsai. Beginners should buy a bonsai that has been shaped to some extent, then raising it to the shape of their choice. If you have a bit of experience, you can grow bonsai from a seed, although that does take time. Certain trees are vulnerable to extreme humidity and cold, so you should buy your bonsai at a specialty store to find a fitting choice.

Q5 – What tools do I need to raise a bonsai?
Scissors able to cut thick branches, scissors to trim thin branches and leaves, tweezers, scissors for gnarls on a trunk, wire, special pliers, and so on. Initially, a bonsai set for beginners is recommended.

Q6 – How old does a bonsai get?
Depending on the kind of tree, bonsai can live from decades to centuries if cared for properly. If you want to enjoy your bonsai for a long time, care for its well-being and give it a long life.

The World of Bonsai at Shunka-en Bonsai Museum 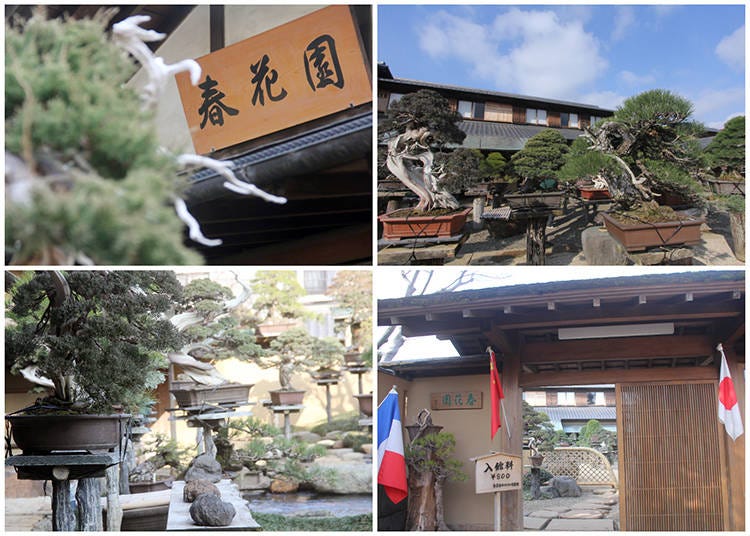 1) The sign of Shunkaen Bonsai Museum 2) and 3) Old, expensive bonsai lined up in the large garden 4) The entrance, featuring the flags of various countries

Shunkaen Bonsai Museum was opened by Kunio Kobayashi, one of Japan’s leading bonsai creators. His goal was – and still is – to spread the charm and wonder of bonsai throughout the world. It’s a quiet 20-minute stroll away from Koiwa Station on the JR Sobu Line in Tokyo’s Edogawa ward. Or simply take a bus if you don’t feel like walking.

The museum welcomes visitors from all over the world on a daily base. Kunio Kobayashi’s works and those of this students are both exhibited and sold in traditional Japanese buildings, enhanced by a beautiful Japanese garden with a little pond. In spring, cherry blossom trees bloom beautifully as well! On Sunday, there’s a bonsai class that offers a one-day experience of the magical world of bonsai. For this, reservations are required and the cost per person is 3,800 yen – for an extra 2,000 yen, you’ll be able to take the material back home with you.

The world of bonsai is surprisingly deep and rich, but a basic understanding of the little trees’ main criteria opens the doors to this intriguing part of Japanese culture. The Shunka-en Bonsai Museum is a wonderful place to discover the unique charms of bonsai. It features a lot of works of the famous Kunio Kobayashi, a prodigy when it comes to the art of bonsai. Enjoy the tour to make the most of your visit and get to know bonsai on a wholly different level!