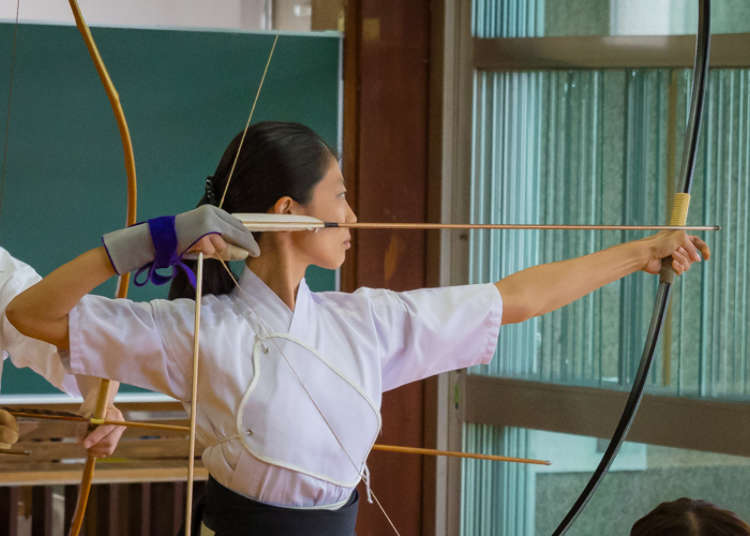 Ever wanted to try your hand at Japan's way of the bow? While it may seem daunting to head out to the local dojo with limited Japanese, there are other options available for you experience Japanese Archery. 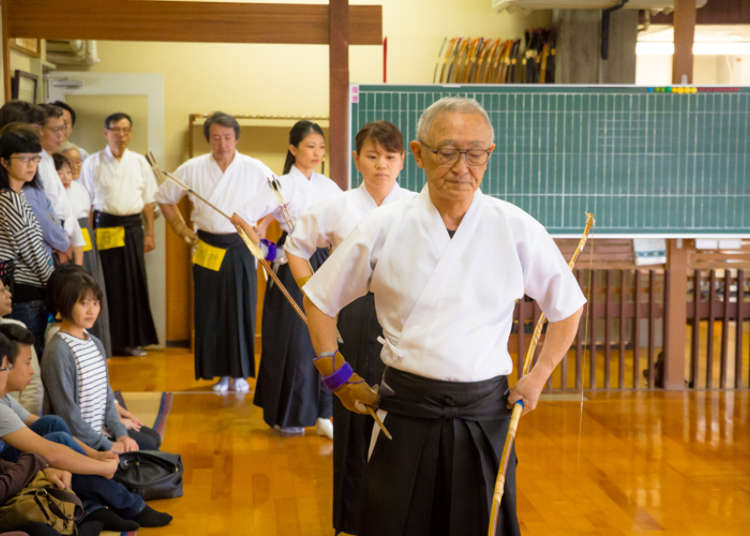 Thanks to the Meguro International Friendship Association, I was able to participate in a Kyudo open-house-like event in Meguro with a group of more than 30 international residents and tourists.

Held at a gymnasium, the event itself was around 3 hours long and began with a brief explanation of safety rules and a demonstration by black belt Kyudo practitioners. English-speaking interpreters from MIFA were on-site as well to help translate and provide explanations, so don't be worried if you don't speak Japanese.

A Brief Explanation of Kyudo 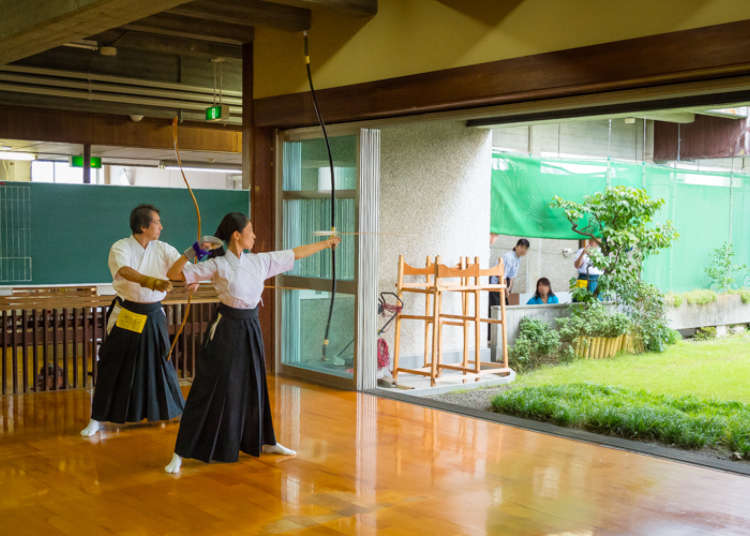 Although not as physically demanding as other martial arts, Kyudo is an elegant art that evolved from the age of warfare when bows and arrows were predominant ballistic weapons.

When the need for archery was no longer needed, Kyudo was developed as "The Way of the Bow" and combined a zen-like state of mind with a focus on correctly achieving each step leading to the firing of the arrow. 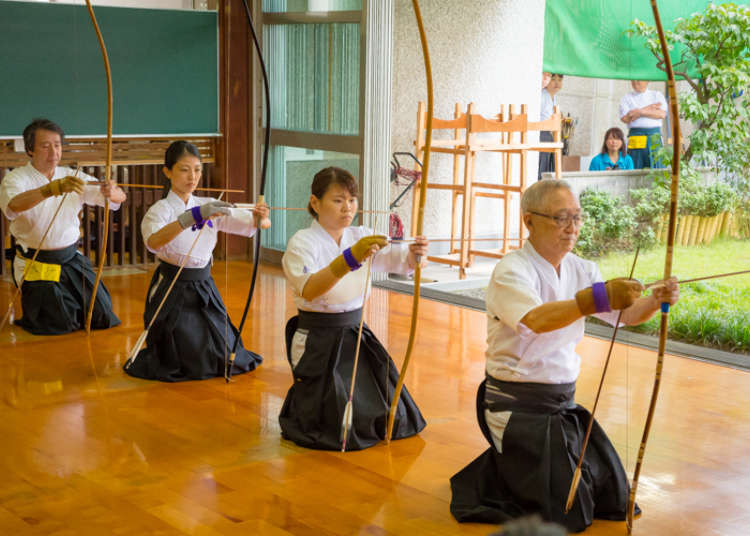 Watching a Kyudo black belt practitioner is a treat in and of itself. The precision in their movements and their deep focus up until the arrow is fired is inspiring to say the least. It's this focus and state of mind that I too would love to try to attain and that is why I was glad to participate in this day's event.

I have to admit that I had no prior experience to using a bow and arrow, however hours of video games have taught me that it should be fairly simple. I was wrong.
Luckily, there were 7 instructors assisting all the participants with tips on how to hold the bow, the method of drawing it, and finally, firing the arrow. 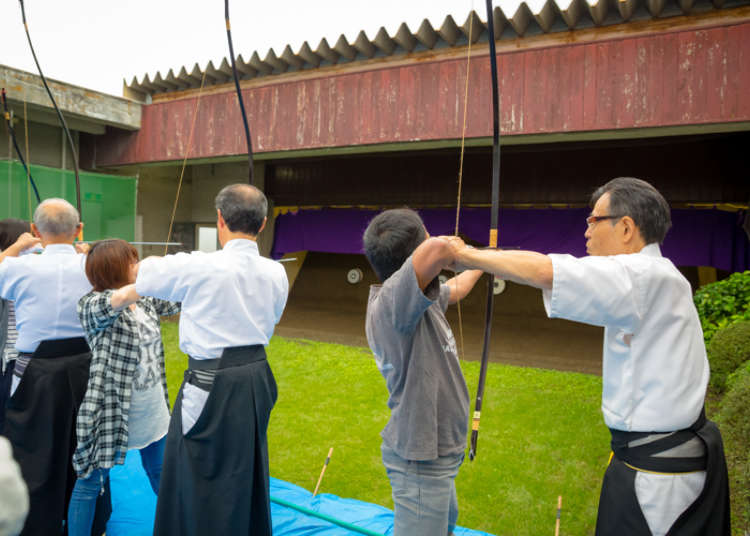 There were 6 lanes where everyone got the chance to try their hand at hitting the target. As we were all newcomers to Kyudo, we were moved closer to the targets as opposed to the usual 28 or 60 meters.

When it was my turn to give it a try, I tried my best to follow instructions, but I missed every shot except my last. It was much more difficult as it looked and as I previously assumed. 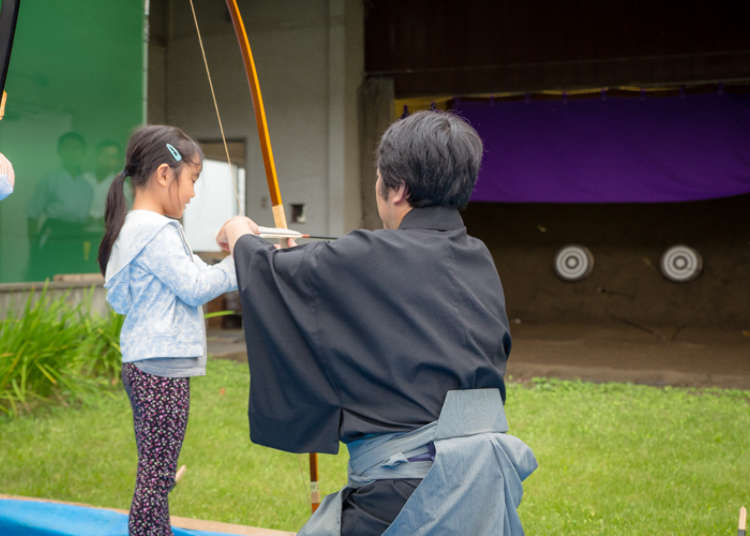 One of the most interesting things that I saw that day were the kids giving Kyudo a try. The bow itself was 3 to 4 times taller than they were, but a few kids were able to successfully fire a few arrows. Overall, this event was a great success and definitely opened up the doors for me to give Kyudo a more serious chance.

This event is held annually on Sports Day and is offered in cooperation with MIFA with another event being held in May. If you would like to participate in their next Kyudo event or other related events, make sure to visit MIFA's website for more information.

Membership is not required, but can be useful for those staying in Japan for a prolonged period of time as other events are held throughout the year.

Experience it for Yourself 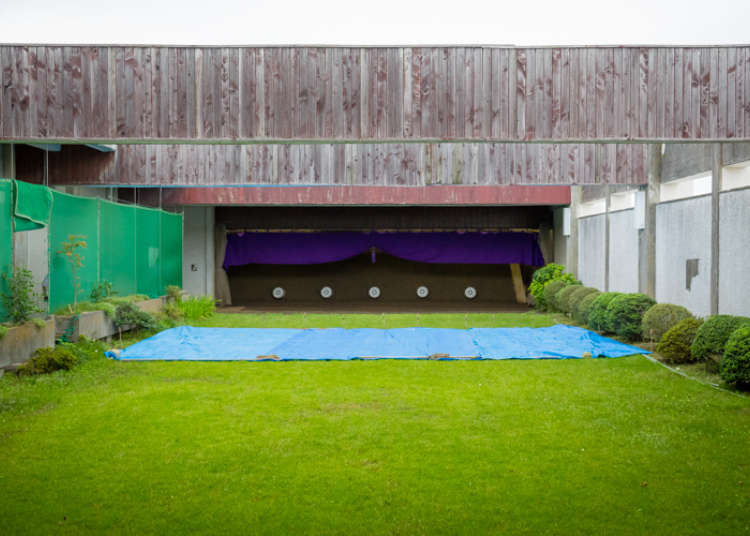 Although the MIFA event is only held twice a year, you can freely attend lessons at the Meguro Chuo Gymnasium on Sunday afternoons: 2:00 p.m. to 4:00 p.m. for a small fee of 400 JPY. Be aware that the gymnasium itself does not have an interpretation service or staff available, so a minimum amount of Japanese language skill is required.

Kyudo may not be as widely-known as Kendo, Aikido, and the others, but it is slowly gaining in popularity and steadily becoming more accessible for international residents and tourists in Japan.

Give Kyudo a Shot! 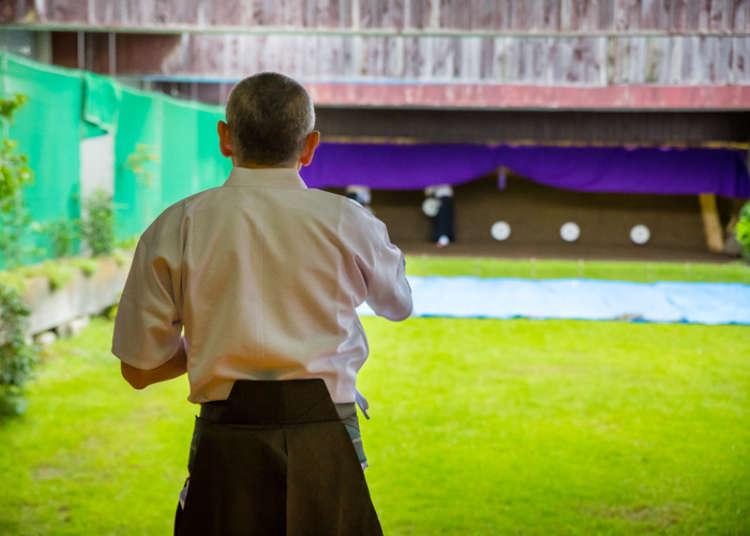 Would you give Kyudo a try or do you practice yourself? We would love to hear from you, message us on our social media outlets and let us know your experiences.