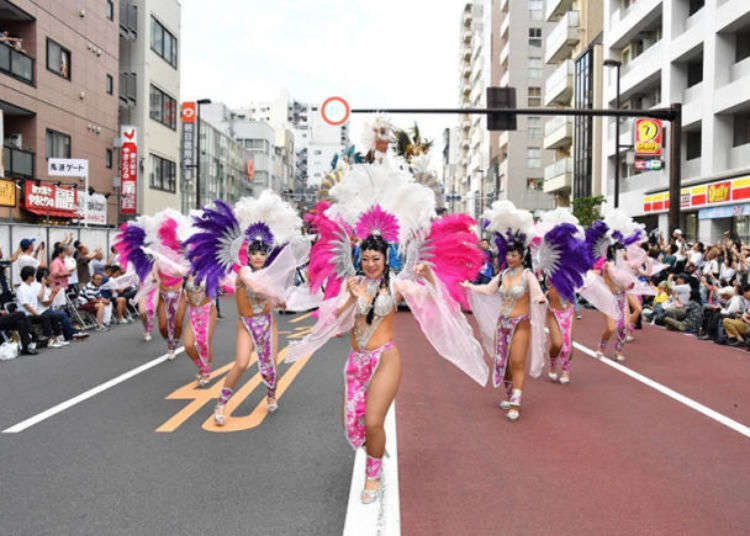 In Japan, summer is marked by a ton of lively festivals, and the Asakusa Samba Carnival is one of Tokyo's most colorful!

Held in Tokyo’s Asakusa, on the last Saturday in August, this colorful contest and parade of around 5,000 samba dancers and teams from across Japan attracts over 500,000 spectators each year. If you are visiting Japan in the midsummer, you should definitely add this one-day festival to your plans!

*On April 25, 2022, tentative dates for the Asakusa Samba Carnival were released, however definitive plans for 2022 have yet to be announced.

What is the Asakusa Samba Carnival? 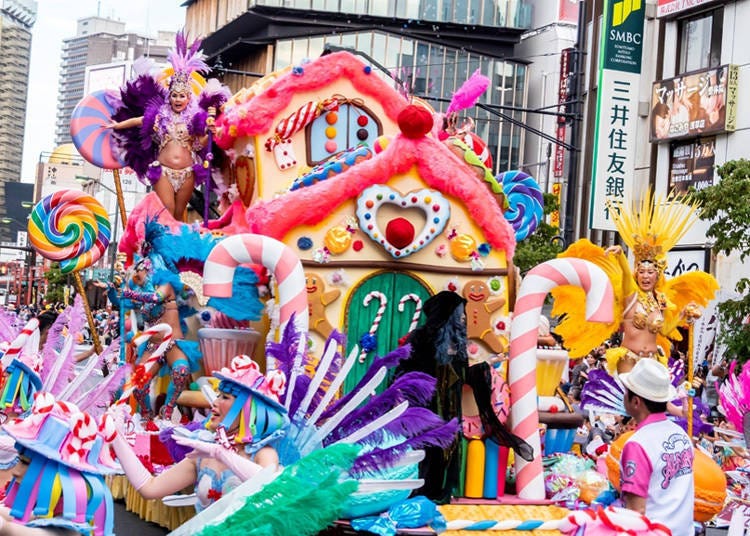 Asakusa is one of Tokyo's historic downtown areas. There are many sightseeing spots centered around Sensoji Temple, where you can feel the old Edo culture and Japanese culture all in one place, and it is a popular area for foreign visitors. And this is where the Asakusa Samba Carnival, Japan's largest Carnival event, takes place. It gets a lot of attention, particularly on TV, and it will probably pop up in one of your tour books! 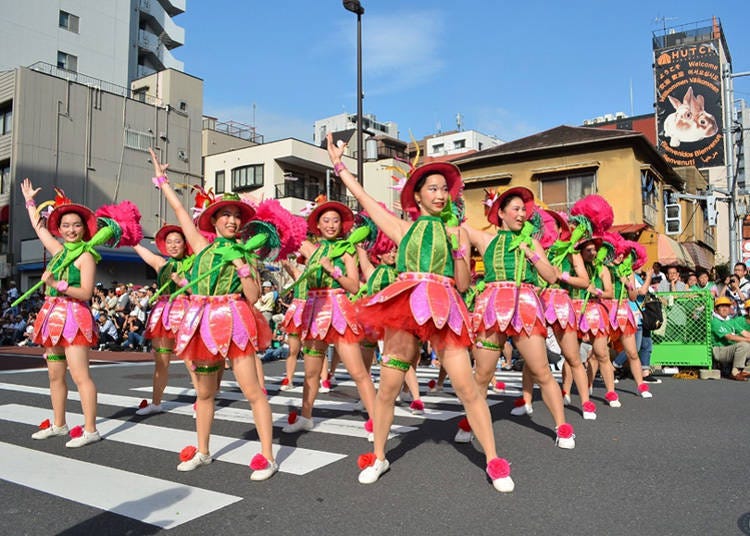 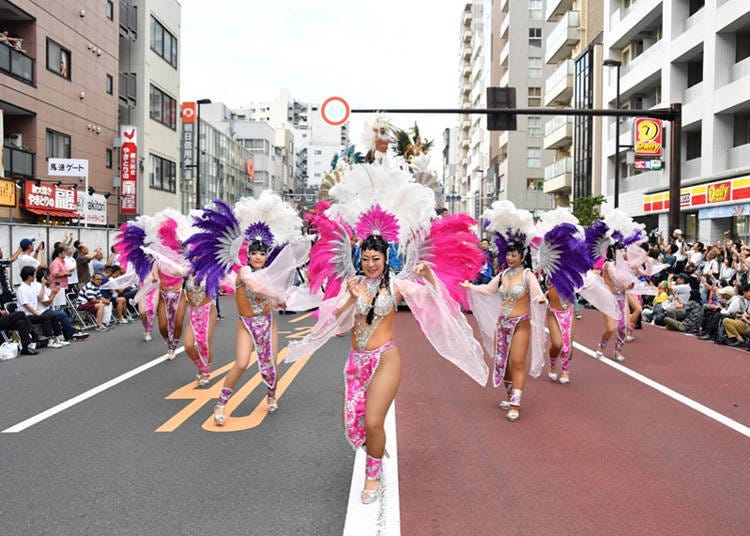 Asakusa Samba Carnival started in 1981 as an event intending to revitalize the town. Today, it has become one of Japan's leading events, attracting some 500,000 spectators every year. The popular highlight is the contest-style parade with around 5,000 participants! While riding the rhythm of authentic samba, the gorgeous costumes, and performances of each team charm the audience.

The contest attracts a large number of spectators. Initially, the teams were more in the category of costume competition than the samba parade. However, it has gradually changed into the authentic samba parade that it is now.

Two leagues battle it out to rank first!

In the Asakusa Samba Carnival Parade Contest, samba teams gather from all over the country are divided into two leagues: the S1 League and the S2 League. Teams compete for rank. These two leagues have a replacement system, and the lowest-ranked team in the S1 League will be replaced with the highest-ranked team in the S2 League. In addition, the lower two teams in the S2 League will start from the paperwork screening process just like the new teams who wish to participate in the following year.

How are the Asakusa Samba Carnival Parade Contest rankings decided? 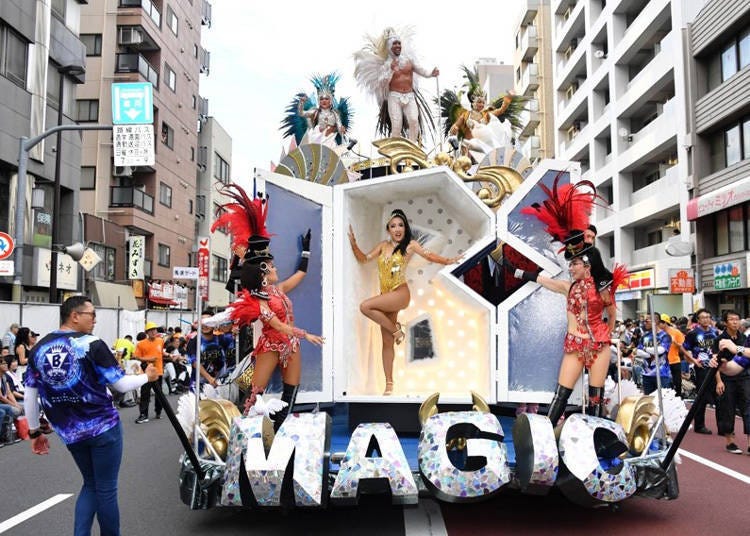 The ranking of the Asakusa Samba Carnival Parade Contest is decided by the votes of 10 judges consisting of people who are connected to Asakusa and Brazil, plus celebrities, as well as mobile and internet voting. Six basic factors are considered: expression of the theme, enthusiasm, costume, performance, dance, and overall evaluation. Furthermore, for the S1 League, three elements (team elements for approaching Rio's carnival) have been designated, and points are deducted for missing elements.

The method of totaling scores is similar to Rio's Carnival. Among the scores given by the judges, the scores for the middle six are totaled. A score of 60 points is a perfect score for each factor being judged. There are six factors for a total maximum of 360 points. For reference, the S1 League winning team in 2019 had a total of 344 points. 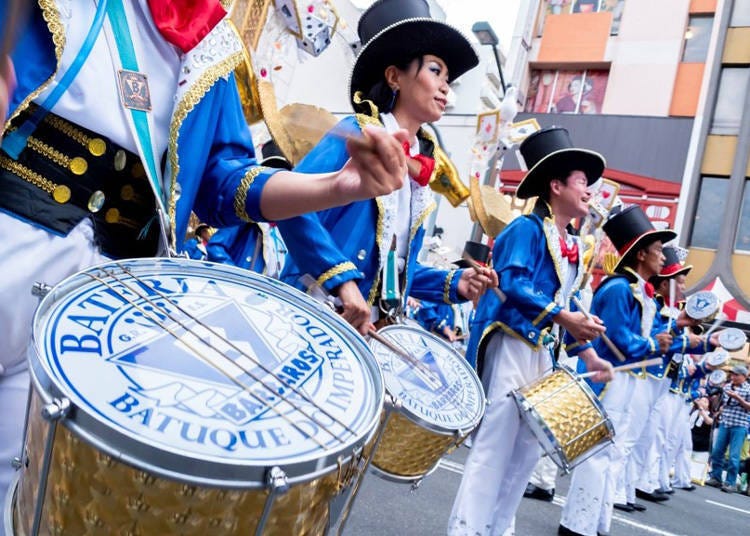 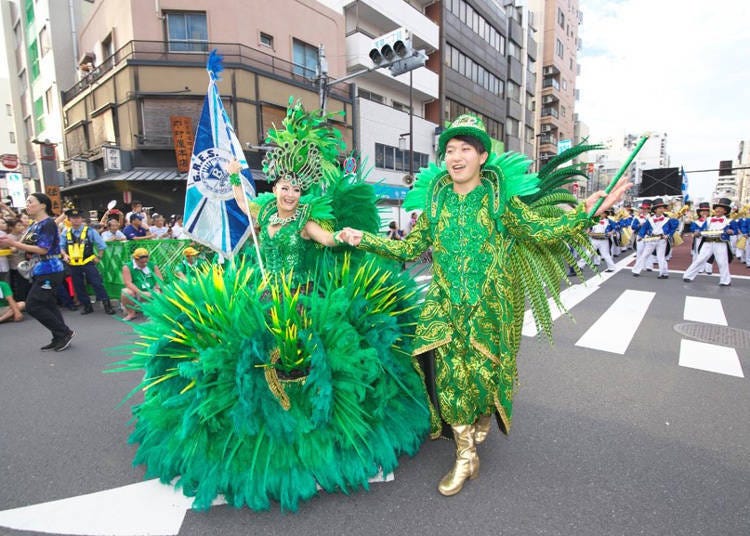 Where is the best spot for watching the Asakusa Samba Carnival? 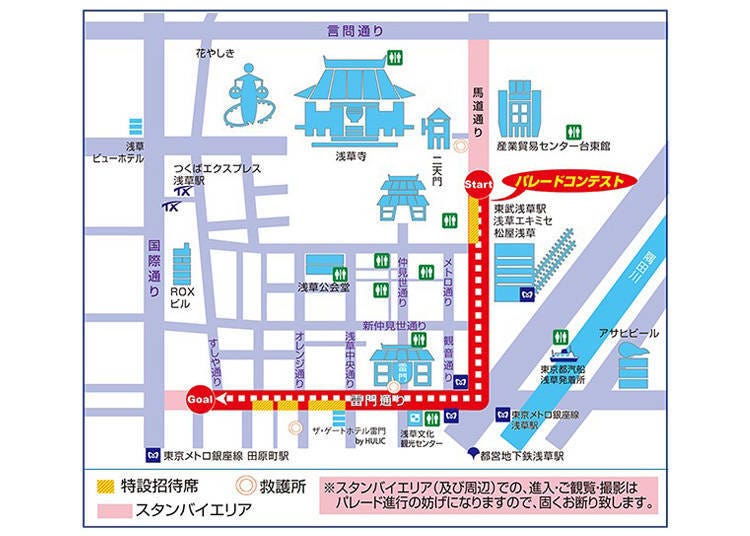 On the day of the carnival, expect huge crowds. Be sure to not try to get there too early in the morning. An excellent time to observe the events and see how excited the whole city is is at the Asakusa Samba Carnival's opening.

At the time of holding in 2019, there were ticket sales on the day for chair seats, which came with an original item as a gift, for a sponsorship fee of 6500 yen. If you want to get close up to the action and have a relaxing time at it, be sure to check it out on the official website. 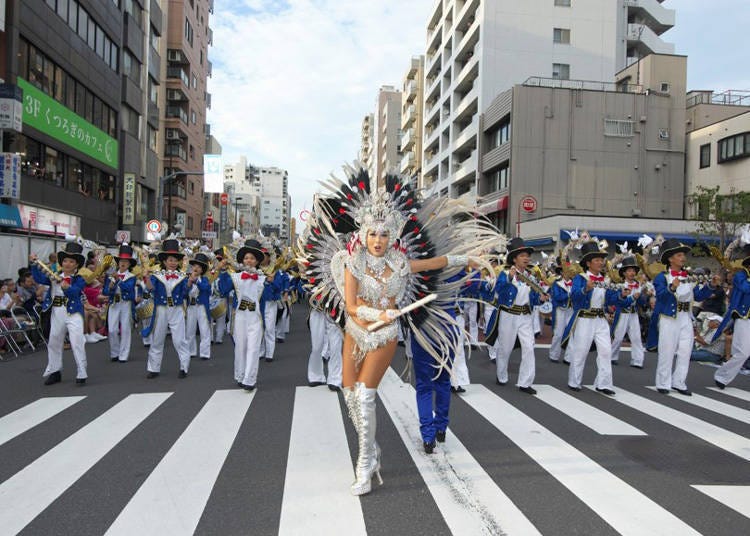 The S1 League can be a team of up to 300 participants! (Photo provided by Asakusa Samba Carnival Executive Committee)

The Asakusa Samba Carnival is held annually (*) on the last Saturday of August. It starts at 1pm and ends at 6pm. During the five-hour carnival, this rough time schedule will determine when and in what league the parade will take place.

It's a long parade that takes 5 hours to complete, so it's a good idea to think about which part of the parade you want to watch and when to take a break.

Trendy "Robot Restaurant" has even participated

In recent years, Robot Restaurant has been a topic of the parade for the theme samba league. Robot Restaurant is a performance restaurant in Shinjuku, which is said to have a total construction cost of 10 billion yen (around 94 million USD). The luxuriousness and "anything-goes" mentality are so appealing to foreign tourists that some visit Tokyo just with this destination in mind. 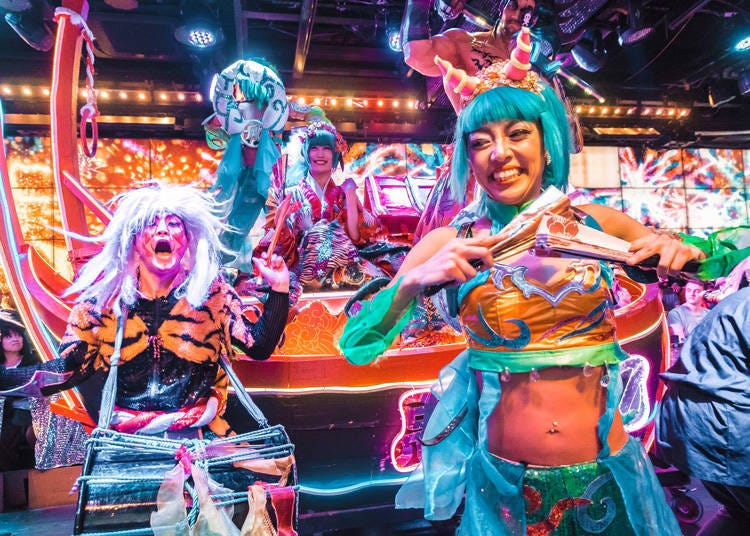 The performers of such popular restaurants will show the gorgeous, extraordinary, and slightly sexy parade at the Asakusa Samba Carnival. They don't necessarily participate every year, but if they do, it's a must! You can enjoy a powerful parade with an anything-goes atmosphere.

There are many ways of getting to Asakusa, so access is straightforward. Depending on where you want to see the parade, you can choose between two stations.

The whole Asakusa area is filled with the Carnival atmosphere on the day, so you can quickly walk around, follow the crowds, and find your favorite spot.

Tips for the Asakusa Samba Carnival

There are a few points to remember to enjoy this fun festival event. Summer in Japan is hot and humid, and Asakusa Samba Carnival will be held in the scorching summer heat. Be careful about heatstroke. Be sure to buy water or a sports drink in advance and stay hydrated; sunblock and sunglasses are recommended as well.

Cafes, restaurants and convenience stores near the venue are open on the day of the event, and you can purchase drinks at shops along the road; however, they are very crowded, it's best to bring your own drinks.

Also, public toilets are available around the Nakamise Shopping Street, and in the nearby department store. Since there are not many, it is advisable to check where they are located in advance and to refrain from drinking alcohol, which will make you need it more frequently.

Be careful of the heat and enjoy the Asakusa Samba Carnival!

Asakusa Samba Carnival is becoming a Japanese summer tradition. It's an event where you can easily enjoy the atmosphere. When going out, be sure to take measures against the heat, don't litter, follow the staff's directions, and enjoy together with everyone else to make this a fun event.