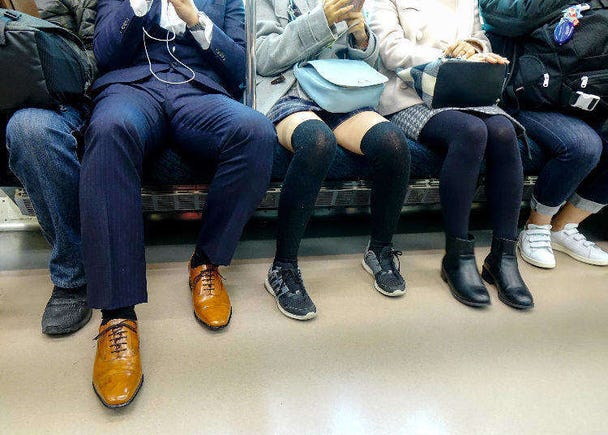 Japan’s Nuisance Ranking: What Annoys Japanese Most About People in Trains

Japan’s crowded trains, especially full during the rush hours in the morning and evening, are a part of Japanese culture that is known around the world. Japanese people, who are dealing with these intensely crowded situations day by day, have created a unique set of “etiquette for riding the train”.
When this series of unspoken rules is violated somehow by others, many Japanese tend to roll their eyes, quietly irritated by the lack of social awareness of the offender concerned.
To give insight into how Japanese view trains and the unspoken, unwritten rules regarding their use, we’re taking a look at an interesting ranking of the behavior that Japanese people find the most annoying when riding the train. We hope that you can learn some points to be aware of when using trains in Japan!

Understanding Japan’s Train Etiquette with the “Most Annoying Behavior Ranking” 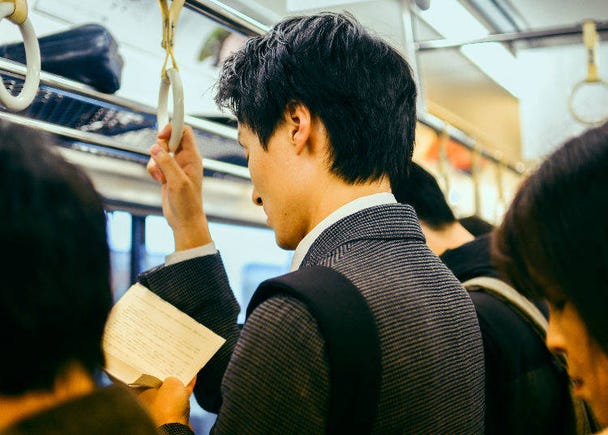 How do the Japanese people who use crowded trains every day feel about their train etiquette? The Association of Japanese Private Railways, made up of 72 private railway companies such as Tokyo Metro, Tokyu Corporation, Keio Corporation, Seibu Railway, Odakyu Electric Railway, Tobu Railway, and others, conduct a survey every year regarding “etiquette at the station and inside the train,” which is where the “most annoying behavior ranking” comes from. The survey was conducted online from October 1 and November 30, 2017, and asked people about the things other people do in trains and stations that they find the most annoying. Below is a summary of the results. 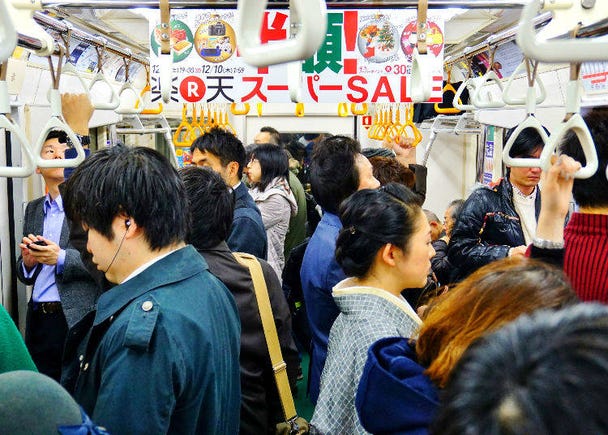 Looking at the results of the ranking, “noisy conversation, rompish behavior” is in first place for nine consecutive years. It shows that maintaining a quiet space inside the train is regarded as common courtesy. Other answers include “sound coming from headphones” (#6), “ringtones and speaking on the phone” (#7), and “sounds of electronic devices” (#16).
Japan’s unique culture of being quiet in the train is somewhat rare even on a global scale and it is considered to be related to Japan’s educational situation. From early childhood, Japanese education emphasizes focusing on actions in consideration of others rather than oneself when in a group setting. Together with the thought of always maintaining the order of a group over acting individually, these two aspects can be said to be at the root if this custom. In this way, this consciousness focusing on the public that is created by school education may be the reason for the “etiquette of silence” in Japanese trains. In the same way, phone calls, conversation, and music are easily seen as nuisances.

“The way of sitting” in second place 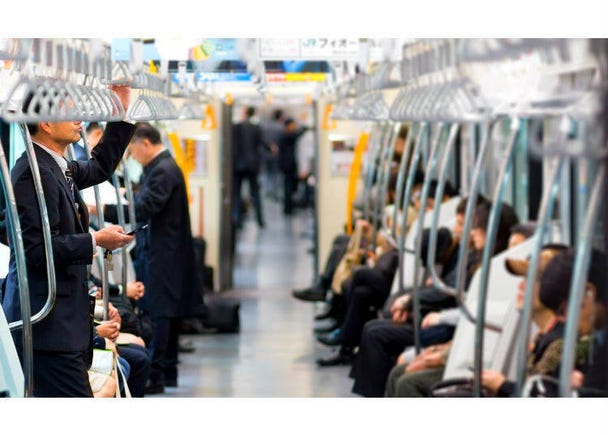 The second-most annoying nuisance is “the way of sitting.” Especially “blocking a seat” has been quoted as an act of major annoyance. This refers to the way that people conduct themselves, and we can understand that it is seen as annoying when passengers act without considering others around them. In this case, consideration means “not depriving others of space.” Of course, there is no designated space for every passenger, but an invasion of personal space is nonetheless a nuisance. “The way of holding/carrying bags, luggage, etc.” (#3), “sitting on the train floor” (#12), and “reading newspapers, magazines, or books in a crowded car” (#17) is also part of this, an expression that one’s personal space inside the shared space of the train car should be respected in mutual awareness. If someone acts upon their own needs alone, someone else is bound to be negatively affected. Next to these examples are many things regarded as an annoyance for this very reason.

Doing one’s makeup in the train (#11): Japanese women do their makeup on the train?! That’s not annoying at first glance, but... 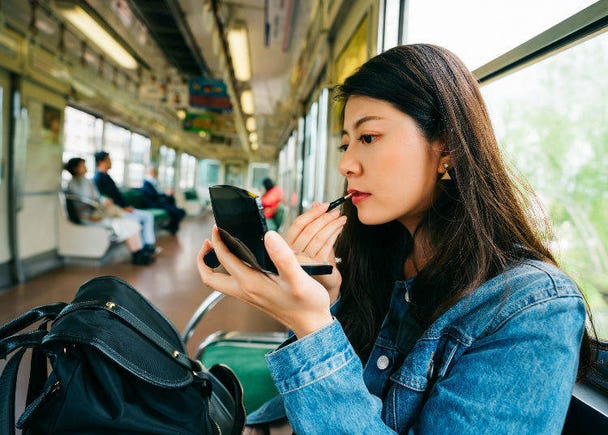 From all the list of train nuisances, “doing one’s makeup” in 11th place seems to stand out. At first glance, it might not seem like an annoying act at all. The passengers doing this may justify their behavior with the thought of “I do not directly inconvenience anyone with it,” but can it really be said that a personal act involving only yourself is not a nuisance?
Taking restaurants as an example, eating and drinking there is natural and appropriate, whereas eating and drinking in a train, clearly meant for transport, that same act is no longer appropriate. “Public spaces” each have “appropriate and inappropriate behavior.” If we look at a train as an “enclosed space intended for transportation,” we can see that the act of “doing one’s makeup” is inappropriate. In other words, while it does not directly harm other people, it is not something you should do in a “train,” a public space that an unspecified number of people use as a means of transportation. The act causes discomfort to others and is seen as a nuisance as a result.

Eating and drinking in a crowded car (#13): that’s a taboo as well? 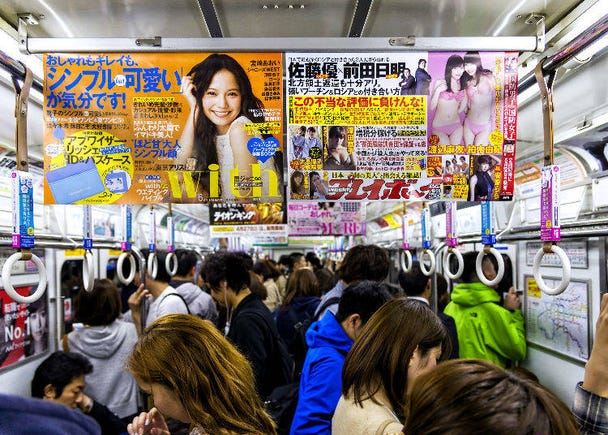 Also a personal action, eating and drinking directly inconveniences other passengers. It is not only the smell of food and beverages that can be an annoyance, but because you use your lips, teeth, tongue, and jaw for eating, all of that produces sounds. People in the direct vicinity will be visibly displeased. In other words, eating and drinking is, in itself, an act carried out only by the concerned party, but in the closed space of a train, eating and drinking impacts the visual sense, the sound impacts the hearing, and the smell impacts the olfactory sense—offending three out of five senses.

Specific Nuisances: Did You Do Something Unknowingly? 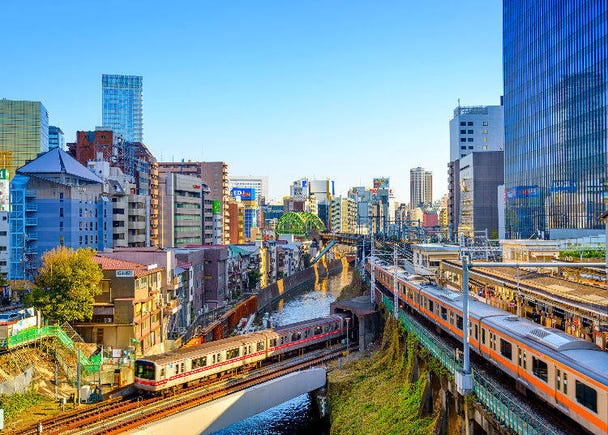 Let’s look at specific nuisances regarding “how to sit” (#2), “the way of holding/carrying bags, luggage, etc.” (#3), and “not following etiquette when getting off/letting people get off (#5). When riding a train in Japan, these are things to keep in mind to not inconvenience others. 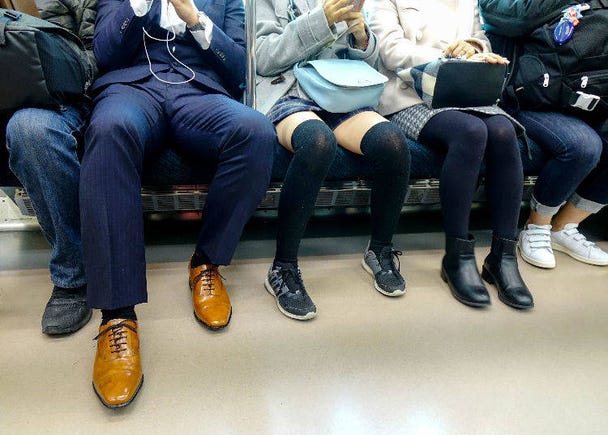 Pay attention to personal space when sitting! Try to touch your neighbors or people standing in front of you as little as possible 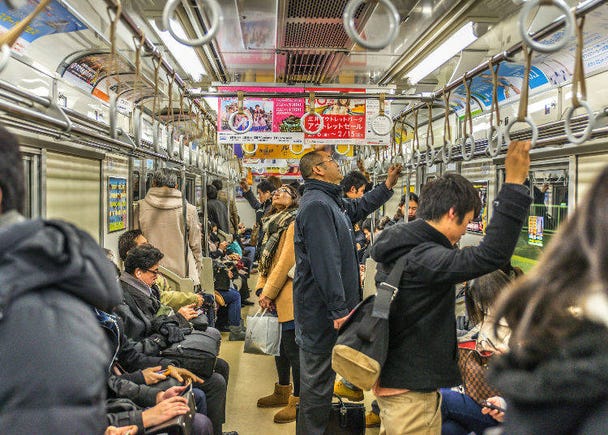 Part of the most annoying actions of “the way of sitting” in second place is “blocking other seats” and “stretching or crossing one’s legs.” Many passengers think that while as many people as possible should be able to get in the car, there should be some distance to others, even if just a little. Under these circumstances, blocking other seats or stretching your legs will be an inconvenience for others. 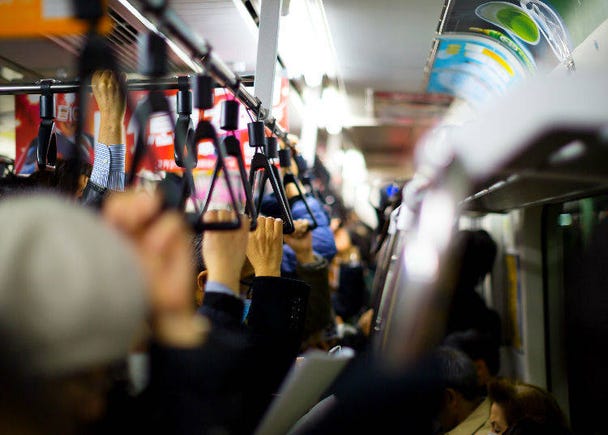 Wearing a backpack in a crowded train is a nuisance! Let’s take it off before getting on 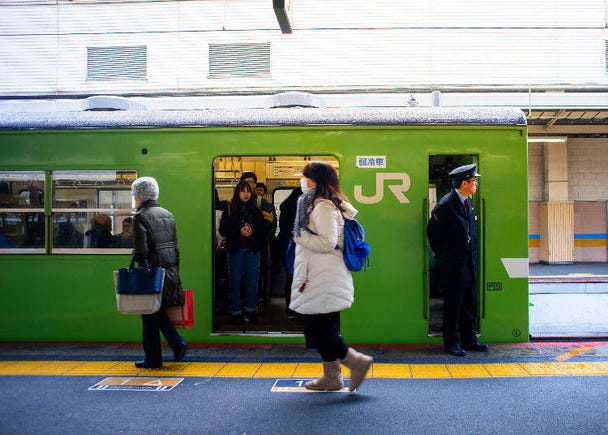 Among the more detailed responses in regard to “the way of holding/carrying bags, luggage, etc.” is “carrying a backpack or bag on one’s back or shoulder” as particularly annoying. Especially in crowded situations when people get pushed against each other, it is hard to notice one’s backpack being an inconvenience if it is carried on the back. For that reason, the custom to take off one’s backpack or shoulder bag and holding them in the front has developed. For Non-Japanese people who are not used to such crowded trains, this might seem obscure, but it is necessary to follow this unspoken rule and hold one’s belongings in the front when boarding a train. Besides that, putting one’s luggage on the floor and on seats was cited as a nuisance as well. Keep your bags as close to your body as possible and always in front of you. 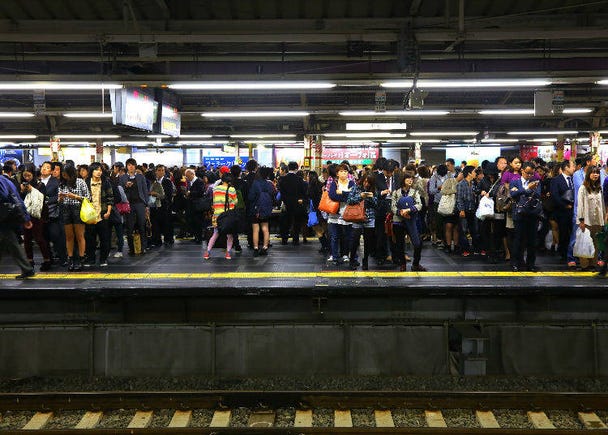 If you stand close to the door in a crowded train, follow the etiquette and get off to let people pass! 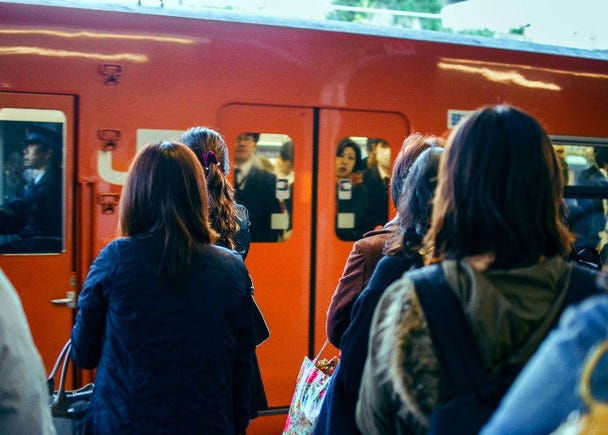 The fifth place is occupied by “not following etiquette when getting off/letting people get off,” but let’s look at this etiquette first. “First letting everyone get off who needs to before you get on” is an implicit rule of riding a train. At the same time, “people who stand near the doors get off to make room,” “people inside the car move further to the back for the boarding passengers,” and “passengers who want to get on line up in two rows next to the doors” is the general custom. In regard to this procedure, the biggest nuisances were named as “not moving away from the doors (even when the train stops at the station, not moving further in to make room, hindering people in getting on or off, etc.), as well as “getting on without letting people get off first” and “cutting the line of passengers next to the doors to get in faster.”
The philosophy of “being always considerate towards others” is one aspect that would seem to be interpreted as Japanese politeness, but the trains are very crowded and filled with an unspecified large number of strangers hurrying to their workplace or school and it seems that some people are not willing to uphold this mutual consideration.

What is Common Courtesy Inside the Train? 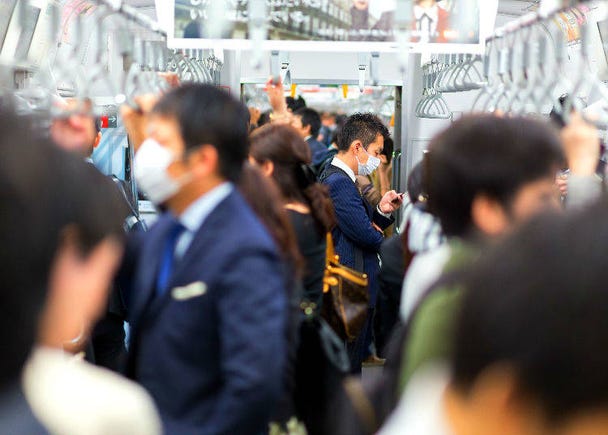 Part of the “nuisance ranking” was not only larger and smaller grievances but also positive acts and customs that make the shared train experience easier to bear. Here are some examples.
・ I gave my seat to a senior and not only did they thank me as they sat down, they thanked me again as they got off. (50s, female)
・ When I was pregnant, I was standing close to the doors, but someone saw the pregnancy tag on my bag and very kindly offered me their seat. (30s, female)
・ When someone with a stroller tried to get off the train, the people around them actively helped them with it, that warmed my heart. (20s, male)
・ I saw a student help out an international tourist by showing them the route on their smartphone, and I thought that was great. (40s, female)
・ I wanted to move further back in a crowded car and said “Excuse me.” The person in front of me took down their backpack to let me pass. (30s, female) 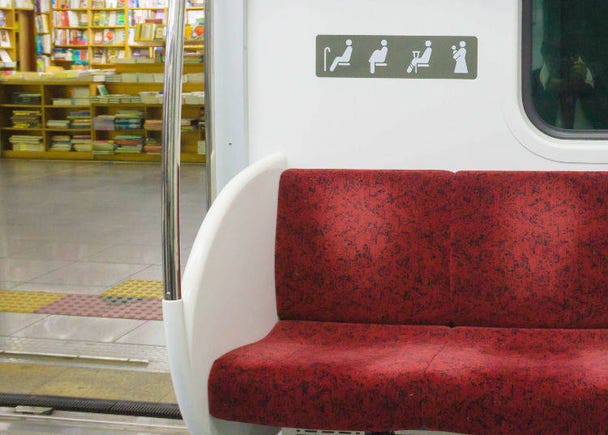 This positive behavior witnessed inside a train, such as “giving up one’s seat for seniors or pregnant women,” or “thanking people for their considerate actions,” are part of a broader societal etiquette.
In recent years, a lot of Japanese people note the trend that not many a person approaches someone proactively who seems to be in trouble in a public space. Of course, sometimes hurrying to one’s destination such as work prevents us from helping, but the background for this is different.
Japan is a society in which people with various different personalities coexist. As a result of the rapid development of culture observed in the last few decades as increasing numbers of people draw toward cities, some Japanese have wondered whether they may be able to catch up with the level of this development when it comes to human communication. In present-day Japan, there is a high possibility that this gentleness of reaching out to people with kindness becomes some form of enemy. In such a Japanese society, a lot of people act to “defend themselves.” Avoiding contact with other people as much as possible and “keeping oneself safe” are the iron rules of current Japanese communication. 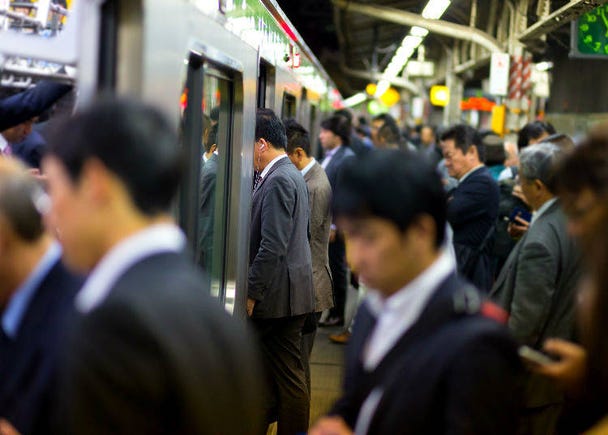 Etiquette differs by country and region and is “the basic set of rules for people smoothly coexisting in one place,” so “when in Rome, do as the Romans do” is natural. The etiquette for Japanese trains, formed by Japanese passengers using these trains day by day, does not only concern Japanese people. When riding a train in Japan, in order to avoid the glaring gaze of other passengers, it’s helpful to be mindful of your surroundings and about what the norms are in the country, making for a more comfortable experience for everyone.