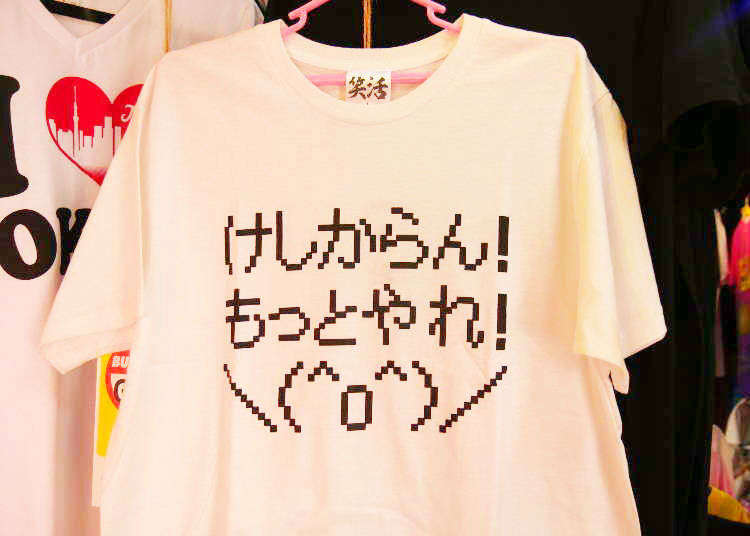 While walking the streets of Japan, sometimes people are wearing shirts that make you want to do a double (maybe even triple) take! These shirts aren’t just popular among Japanese people; they have also gained a lot of recognition from foreigners here as well. In the case of foreign tourists, sometimes it’s hard to tell if they really know what they’re wearing, but nonetheless these shirts are becoming more and more common here!

“Where can I find one,” you ask? Sparkle is a business selling these crazy t-shirts in one of the most-traveled places in Tokyo—Asakusa!

Sparkle: Home to the new breed of souvenir 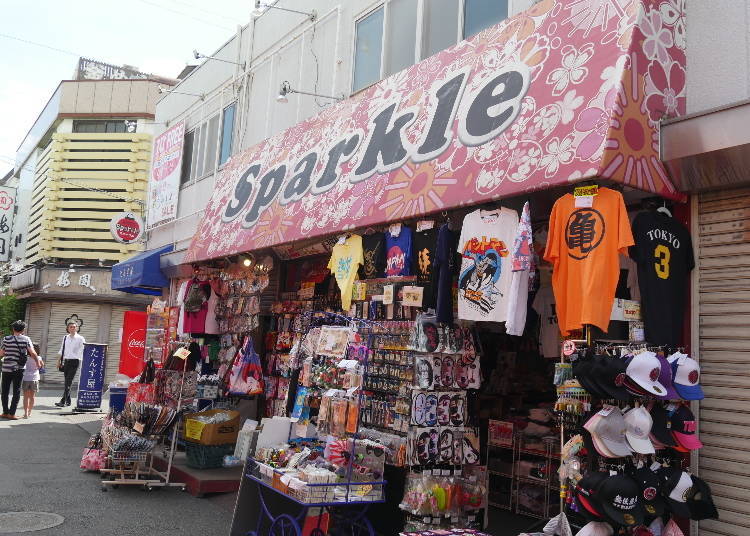 Located in the back shopping streets of Asakusa, Sparkle opened in 2011, making it still a very young shop. Just looking at the storefront, you can instantly tell this place is going to be full of interesting goodies. Although it may not be the typical Japanese souvenir one may imagine, Sparkle is overflowing with amusing items! 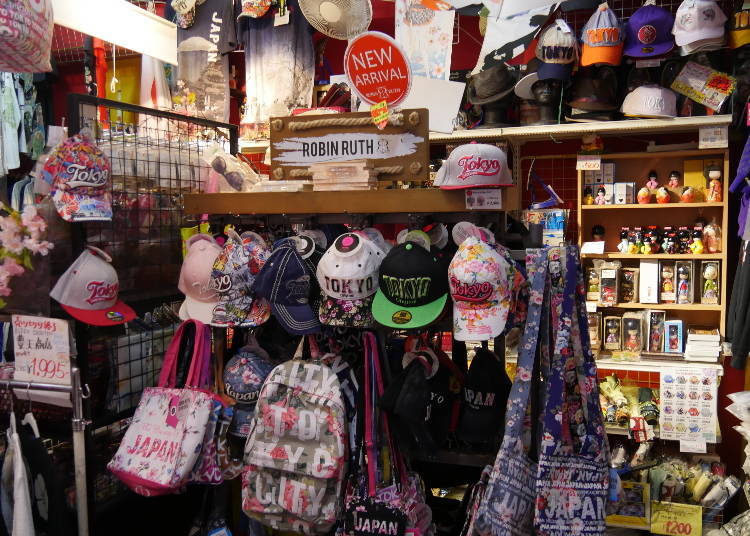 When first opening, Sparkle was selling primarily Japanese-style printed clothing, but quickly realized that the more odd items were being purchased more frequently. Some of these more eccentric items were the t-shirts written in Japanese. 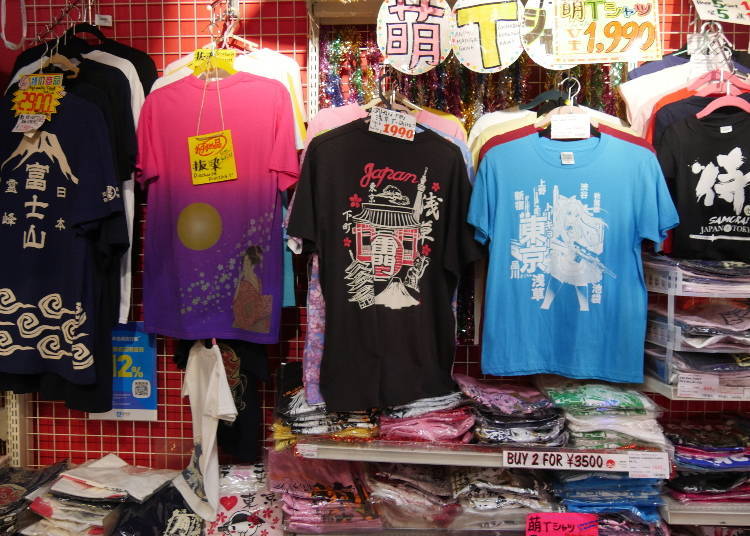 Abroad, it isn’t uncommon to see shirts with Japanese writing on them because many simply like the appearance of the characters. This shop is contributing by making their own original Japanese t-shirts!

We asked Sparkle to tell us about their best-selling t-shirts, and here are the results:

5th place: “That’s disgraceful! Do it some more!” 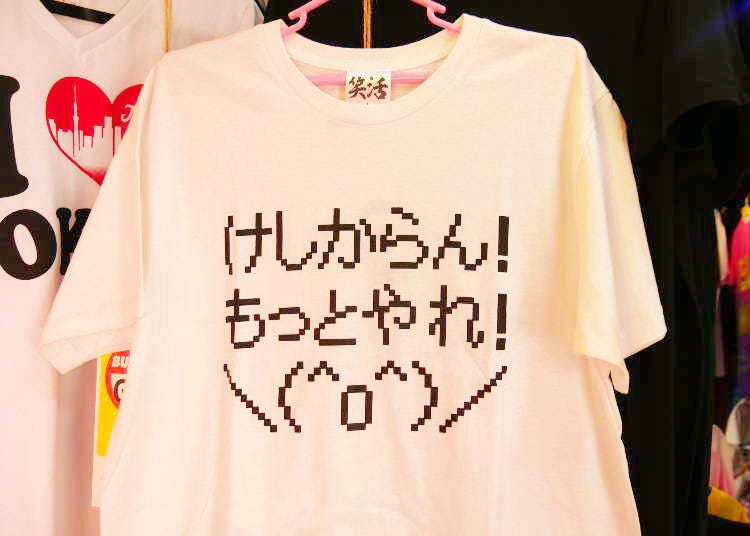 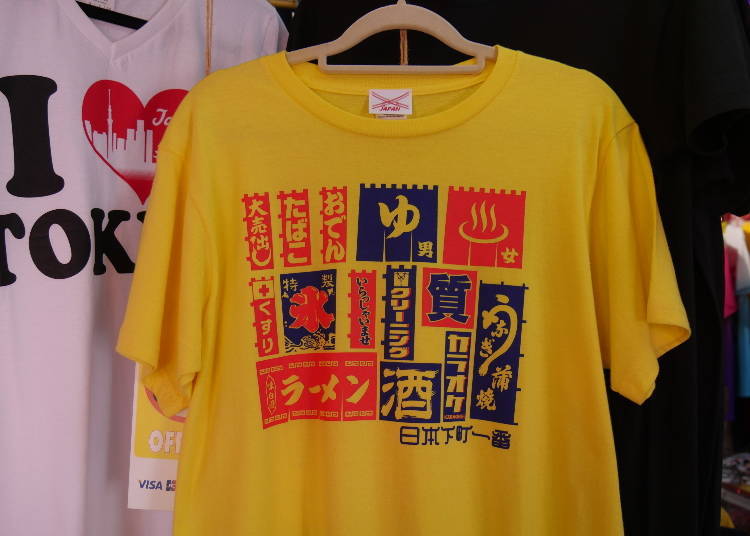 While Japanese people are quite accustomed to seeing these “noren” (curtains at the entrance to a shop) or “nobori” (banners) with writing or pictures on them, they’re something that really stand out and feel special for a lot of tourists! Apparently, this shirt is very favored among expats who have been living in Japan for a while as well. This shirt just has a distinct Japanese flavor to it, which it seems people love! 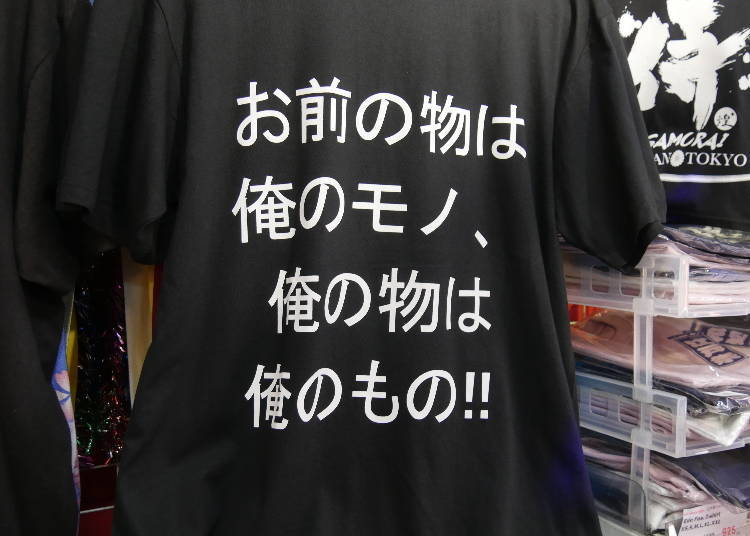 This is a famous phrase among Japanese people, with most people knowing it right away! This is the quote the antagonist in a very famous Japanese children’s anime. This shirt can make one’s self-centeredness known to all without saying a single word! 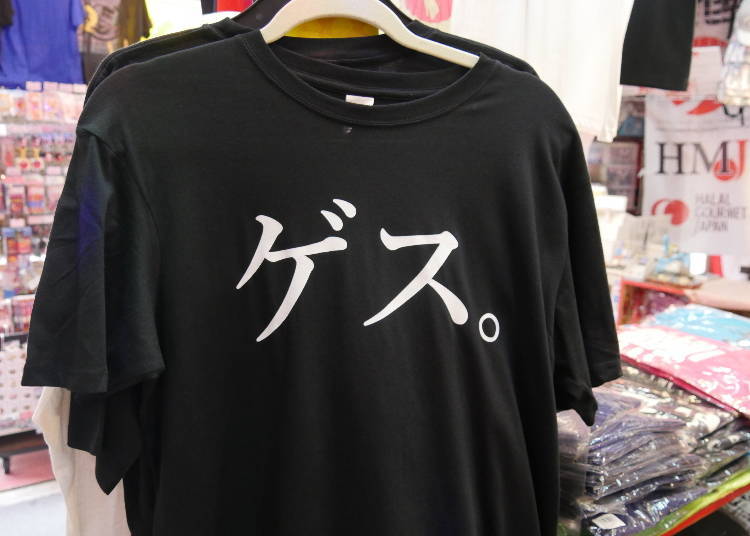 Although just one simple word, this shirt really packs a punch! Even after explaining the meaning of this word, many people happily buy it! So…for the lowlifes out there, we have found the perfect shirt for you!

Just then…a rather gentlemanly tourist decided to take a look at this shirt! 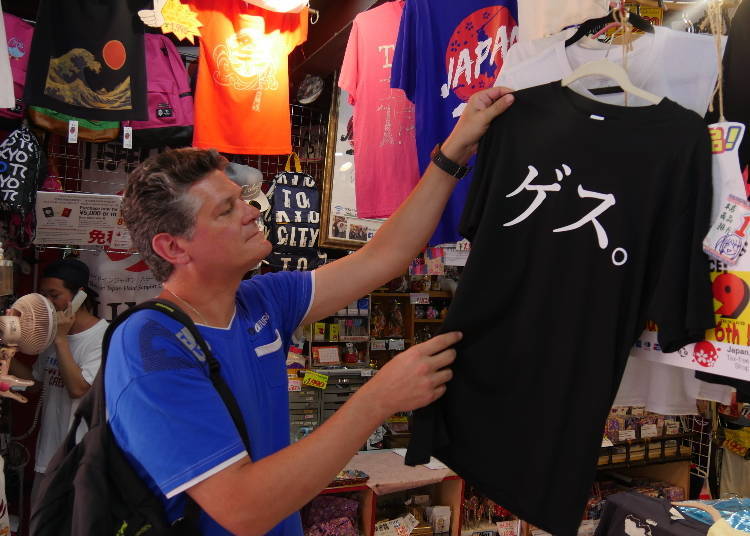 We didn’t have the courage to ask him if he was a lowlife himself before purchasing it, or if the saying just tickled his sense of humor! 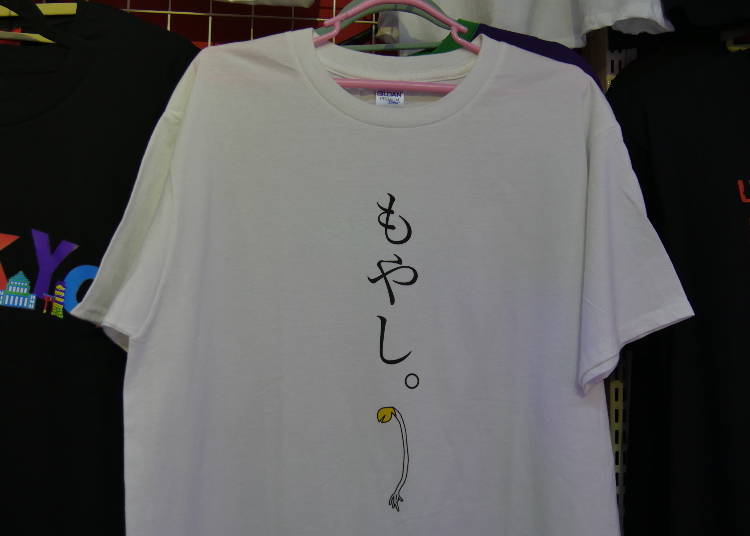 The 1st place bestseller from Sparkle is a plain white t-shirt with a sad-looking little bean sprout with the word “bean sprout” written in a plain font. There is something almost artistic about this simple t-shirt that we just cannot put our finger on! Perhaps this is part of the key to its popularity.


Other than “Bean sprout,” these shirts are usually sold at 999 yen apiece (“Bean sprout” is 1,990 yen). Sparkle also has a constant buy five, get one free deal, so many people take advantage of this and buy several shirts at once!

What kind of people buy these wacky shirts?

We’ve asked head of sales Mr. Tejima about who buys these shirts here in Asakusa, which is mainly known for its traditional Japanese feel. 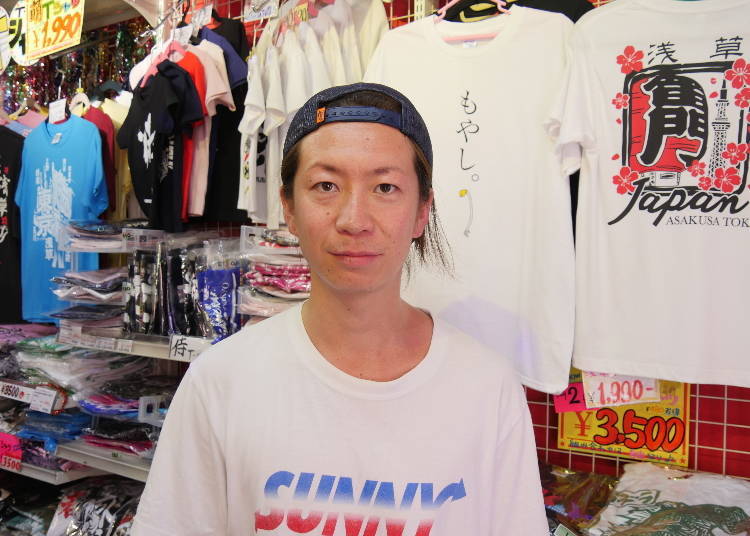 “We of course have people come from all over the world, but something unique about our store is that we have many Indonesian customers because we have a Muslim prayer room here. It’s important to continue worship even while traveling, so many are very happy with it. I’m not sure if it has to do with our prayer room, but many famous Indonesian artists have also visited and buy a lot from us,” says Mr. Tejima.

Japanese customers tend to be school-age kids on a field trip in the area. A lot of them will be surprised by the shirts and really get a kick out of them! So, put very exaggeratedly, Sparkle could perhaps be turning into the Disneyland of Asakusa because of its novelty.

Tejima also tells us that many Japanese students planning to go study abroad will buy t-shirts there for their host families. Instead of the typical gift or souvenir of chopsticks or origami, it seems that these t-shirts are also becoming popular!

There are countless bizarre items to be found inside of Sparkle that it almost feels like a treasure hunt going through everything! We asked the head of staff, Ms. Karino, to introduce to us items most popular among foreign visitors! 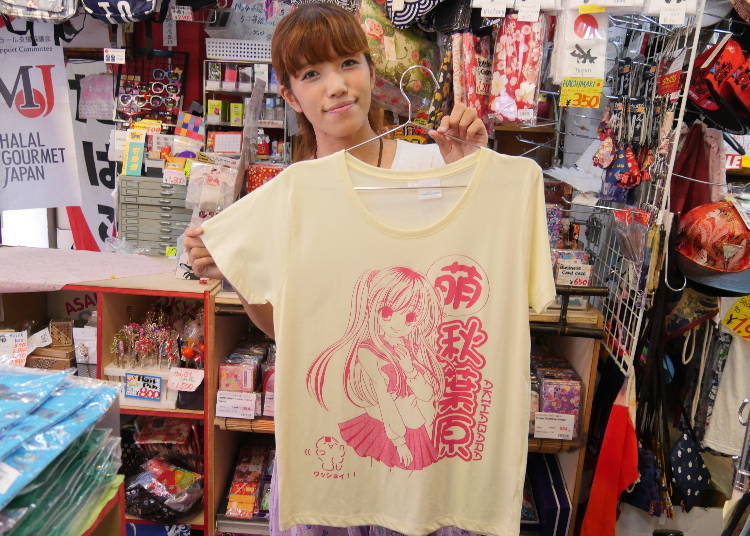 Without having to go all the way there, you can have a taste of Akihabara’s otaku culture right in the heart of Asakusa! It seems that “moe” is a word that many foreigners know well, and it shows in this shirt’s popularity! 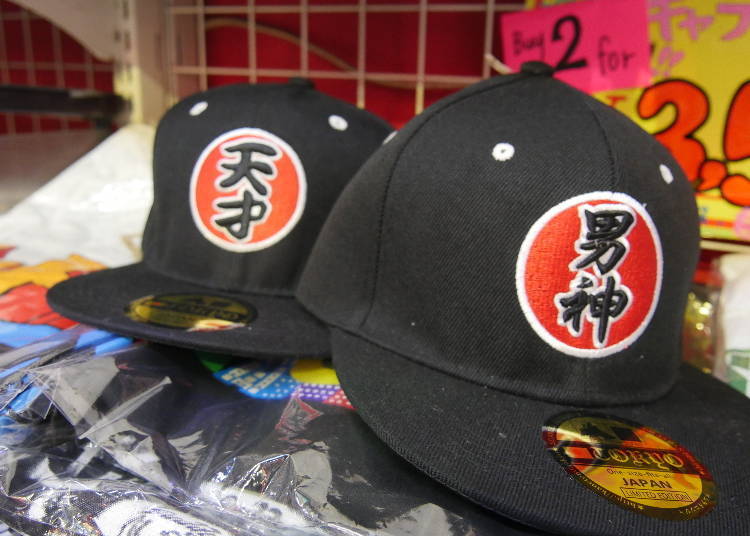 These caps that say things like “genius” or “god” are also quite popular at Sparkle! For those of you who just want the world to know how great you are, these are definitely the caps for you! 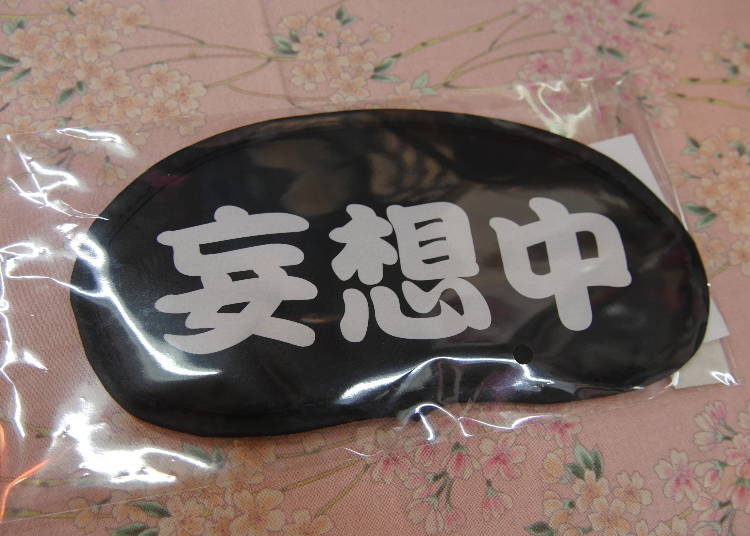 This eye mask that says “fantasizing” really makes you wonder what kind of person is under the mask and just what on earth they are fantasizing! It doesn’t end here—Sparkle has several odd eye masks for you to choose from. 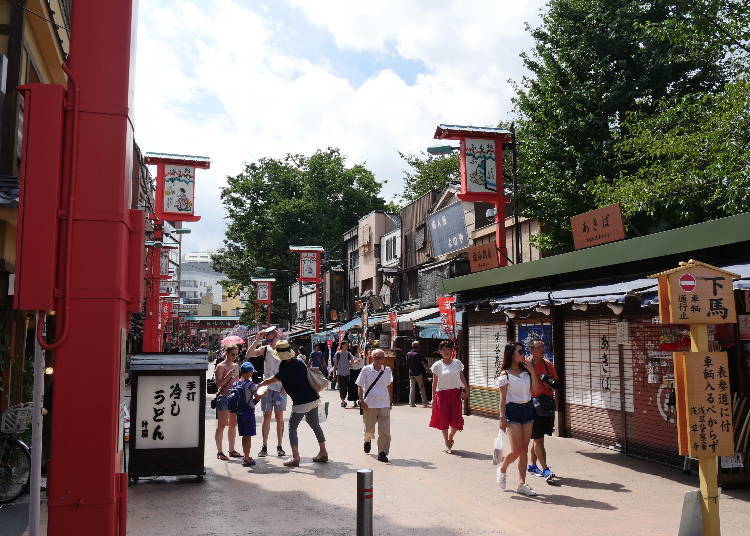 Although the Asakusa area has the image of being very historic and conservative, it’s also full of originality and fun. We really have to tip our hats to the unique taste of the customers at Sparkle!

Asakusa is now a fascinating mix of the contemporary and the traditional, and Sparkle is definite proof of it. Sparkle is always looking for fresh ideas and trying new things and listening to the requests of their customers, so it’s likely you’ll be able to enjoy it no matter how many times you visit. Sparkle is definitely a spot to add on your list while you are here in Tokyo!

After working as a grand hostess, secretary, university career counselor and as a web director, she became an independent writer. A single mother in her 40s, she enjoys having liquid lunches at izakayas. If you're interested in izakayas that are open for lunch, you can follow her on Twitter at @crystain_writer.