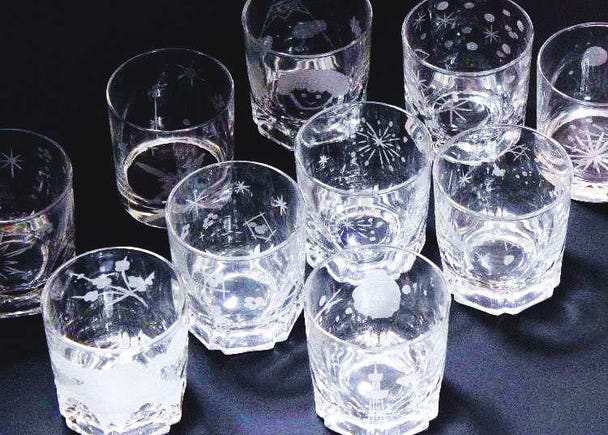 Edo Kiriko is a beautiful Japanese glass cutting technique that is said to have its beginnings at the end of the same-named Edo Period, in 1834. The one who came up with this technique is Kyubei Kagaya, at his glassware store in an area of Edo called Odenma-cho. A lot of the unique patterns and designs that this glass cutting technique is known for were created by craftsmen of the time, hence earning it the name Edo Kiriko.
At Asakusa Ojima, the Edo Kiriko technique still lives on in all its beauty and authenticity, and visitors to the shop can get a real, first-hand impression of this craftsmanship. LIVE JAPAN joined nine exchange students as they tried their hands at Edo Kiriko themselves!

The glassware is created by highly skilled craftsmen with traditional techniques.

“It’s really beautiful but wow, this is expensive!”
“If it doesn’t have to be that detailed, I think I can do it! Which pattern should I choose...”

Eiji Ojima, who is teaching the students about Edo Kiriko today, is a third-generation craftsman of the glass cutting technique. He started learning the craft from his father, Nobuo Ojima, and it takes a total of 10 years to truly master Edo Kiriko. Today, Eiji Ojima is offering hands-on experience workshops on top of his creative activities at Asakusa Ojima. 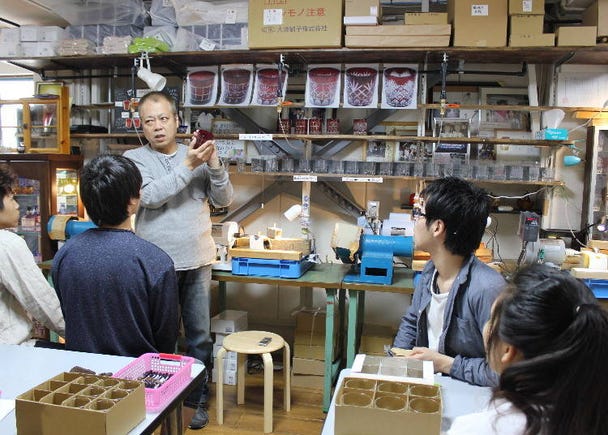 Eiji Ojima’s workshop started right after all nine students had made themselves comfortable in the classroom. After getting to see real Edo Kiriko products, they learned more about the history of the technique, as well as how to use the kanaban, a rotating metal disc, and the grindstone. Then, the real experience started.

The students got to choose their favorite of three differently shaped glasses and started out with a rough sketch of their Edo Kiriko design. Some people just drew whatever came to their mind, others used their mobile phones to do further research or get inspiration – their first ideas took shape as everybody started drawing on the glasses with markers. 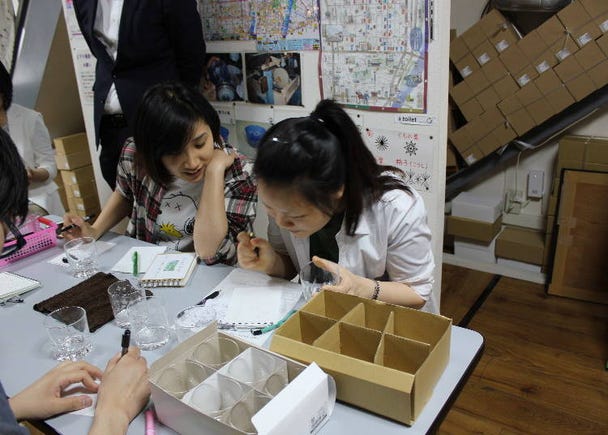 “What are you drawing?”

“I think I want to have my name on it.”
“I’ll draw Chibi Maruko-chan!”
“Japan-like things are nice, such as Mount Fuji and cherry blossoms.”

The ideas were are endless as the possibilities. Once the sketch is complete, it’s off to the machine immediately.

Harder than it Looks – the Height of Edo Kiriko Craftsmanship 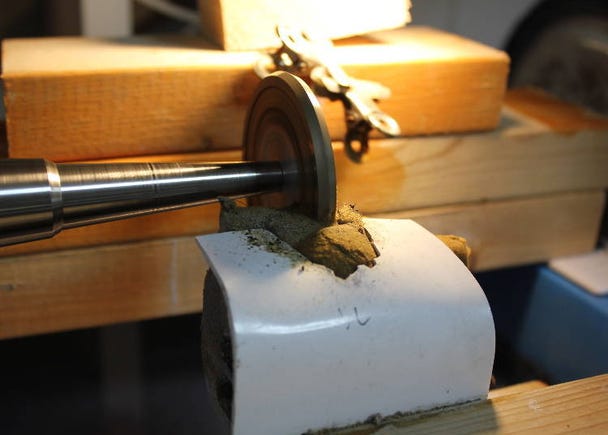 The glasses are carved by a spinning metal disc called kanaban.

Chatter and laughter died down fairly quickly, as the glass carving really demands all of one’s concentration. Under the direction of Eiji Ojima and his staff, the students tried to carve the glass carefully in their desired design – just the right amount, lest the glass shatters under the wheel.

“I thought I could make it look nice pretty fast, but I can’t do it like I imagined at all. This is hard!”
“You really have to concentrate, because you need a certain pressure and accuracy at all times.” 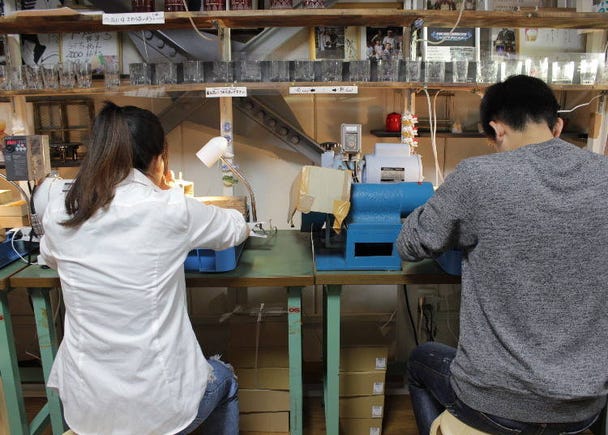 Concentrated work. It’s a simple machine, but it nonetheless requires both skill and knowing certain tricks.

By trying Edo Kiriko for themselves, the students realized how much highly skilled craftsmanship one of the glasses they’d looked at earlier really requires. Some of them changed their designs, to make them simpler and to adjust them to their own technique. 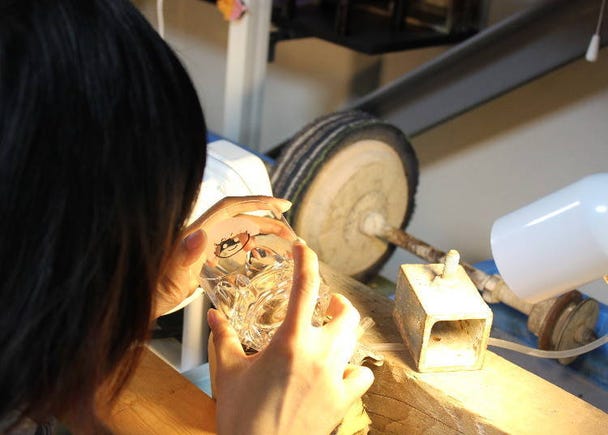 “I can’t seem to carve where I wanted to...” and “I never thought it was going to be that difficult. I tried to make something a bit more complicated, but it’s really hard,” were some opinions while everybody worked in a sort of concentrated trance – the workroom was almost devoid of voices.

After about one and a half hours since the start of the Edo Kiriko workshop at Asakusa Ojima, all the glasses are completed. Of course, everyone wants to see what the others made while presenting their own little work of art, take photos, and just enjoy the hands-on experience. So, how did the students like the workshop?

“Now I understand why the beautifully designed glasses are so expensive. I admire the craftsmen and their high skills. When I started cutting the glass, I was nervous, but then I was able to immerse myself in the work. I think I got to understand what can do if I pour my heart into it, and I really could feel Japanese culture deeply.” (Nationality: Vietnam)

“I ended up with something slightly different from my original design, but I am happy that I have my own hand-made glass.” (Nationality: Japan)

“I was able to learn something new about Japanese culture. I’m happy that I was also able to experience it. I don’t just recommend it to people from outside of Japan, but to every Japanese person as well!” (Nationality: China)

“First, I thought that the Edo Kiriko glasses that we looked at seemed somewhat ostentatious, so when I tried making one myself briefly, I didn’t have confidence in what I did and so I kind of got lost. I think this [glass] is a reflection of my own heart.” (Nationality: Japanese)

“Because I could freely design and make the glass myself, I made great memories.” (Nationality: Vietnam) 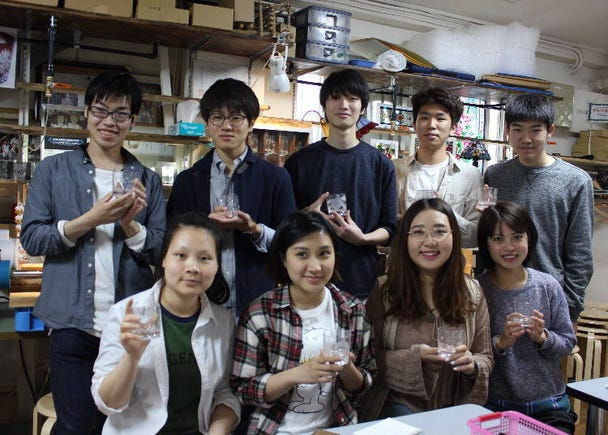 Edo Kiriko glasses as a wonderful piece of memorabilia.

Asakusa Ojima provides proper wrapping and boxes for each glass, so it can be taken home safely without breaking. Why don’t you stop by after visiting Asakusa’s famous Senso-ji Temple and make your own hand-made Edo Kiriko glass, as an authentic souvenir of traditional Japan? 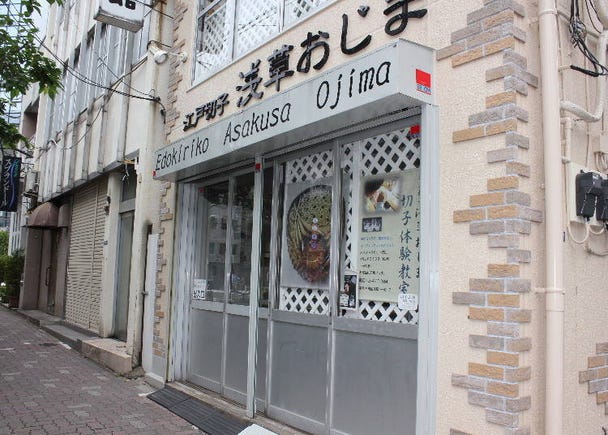