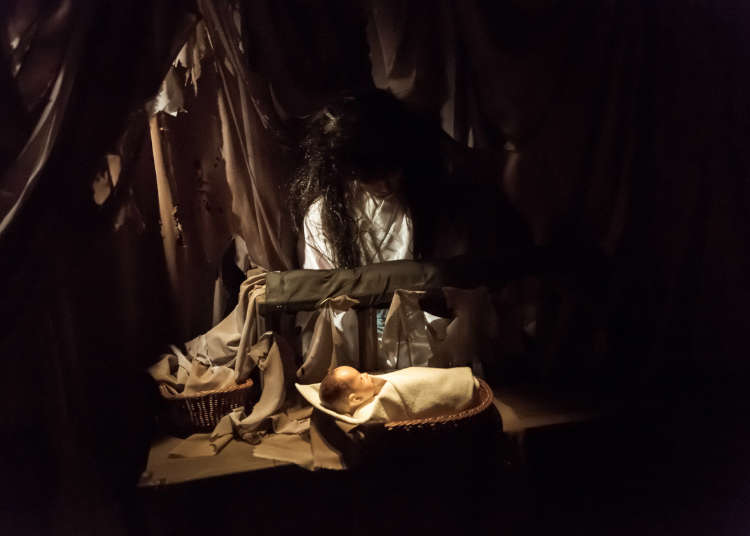 [MOVIE] Entering the Depths of the Spirit World - Akanbo Jigoku

Summer in Japan. A lovely time of year where you can go to the beach, listen to the iconic sounds of cicadas, participate in one of the countless summer festivals, and best of all, enter the confines of a demonic spirit world and brave the bowels of a haunted house!

That's right! Summer in Japan is more than just the rainy season and festivals. This time of year brings about an air of frights and haunts that coincides with the arrival of Obon, a time of year where spirits are believed to return from the grave. You can think of it as a time of year that resembles the spooky Halloween season.

Called "obake yashiki" (お化け屋敷), these haunted houses are popular in the summer time and are believed to help you beat the heat with the chills and frights you receive. With this in mind, I was pretty excited that I got the opportunity to visit a newly opened attraction "Akanbo Jigoku", by famed haunted house producer: Hirofumi Gomi.

Time to Escape the Heat 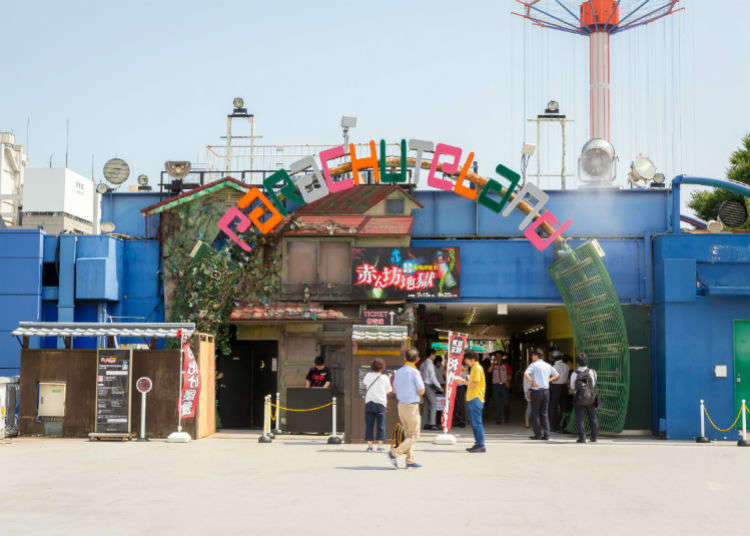 If there is one thing that I love about Japan that stands out, it's how they do horror. Unlike most Western haunted houses which rely on grotesque scenes and jump scares alone, many Japanese haunted houses focus a lot on the chilling story, interaction with the environment, and have a sense of dread as you walk through the corridors. Being a huge fan of haunted houses, I couldn't wait to walk through this new attraction.

When I arrived at Tokyo Dome City, the sun loomed directly overhead with the temperature approaching 36℃ (96°F). From the outside, the haunted house didn't seem too daunting as the surrounding area had colorful attractions for young children. Posters for Akanbo Jigoku were littered around the entrance, revealing a creepily smiling figure hovering over a woman and her child. Although I shook off any feelings of fear at first, the more I stared at the poster, the creepier it became, leaving me to wonder what awaited me inside. 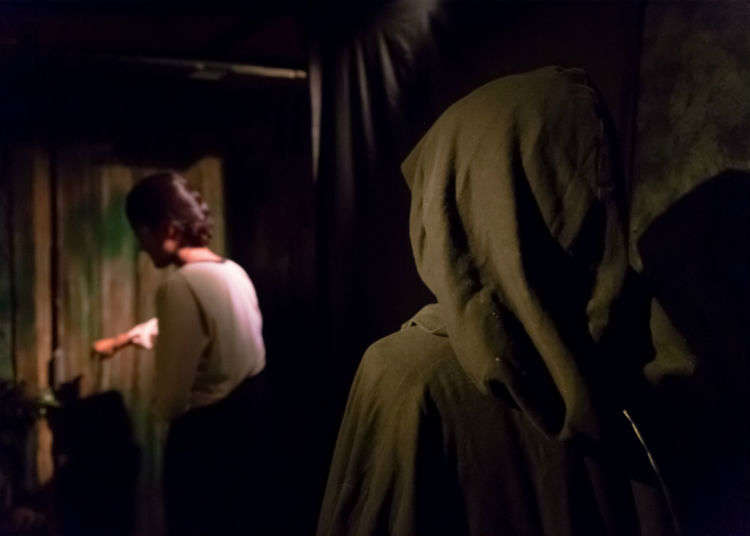 Awaiting my turn to enter, I could hear screams occasionally coming from the attraction. I laughed at the thought of young kids being frightened by an animatronic or by spooking themselves, but as the group of 5 exited the attraction, I noticed that they were all around their mid-thirties. Going in as a group of 3, my bravery began to quickly recede. Immediately, the guide gathered us together and took us into the entrance of the haunted house.

We were in a small enclosed room that was barely lit and as the door closed behind us, a narration began to play in the dark room. The story began to tell us of an event that occured 20 years prior. A baby was born from a human mother and a man from the spirit realm. Soon after, the woman left the spirit world, leaving her child there. Regretting her decision to leave her child, she asked brave people to take her child from the spirit world. The child was saved and was named Shoko.

Twenty years later, Shoko got married and had a child of her own. However, one night Shoko sang a lullaby from the spirit world and due to this, the spirit world found her whereabouts. Soon after, a nanny kidnapped Shoko's child and took it back to the spirit world. Now it us up to us... me, to rescue the baby and bring it back to Shoko.

Too Late to Turn Back... 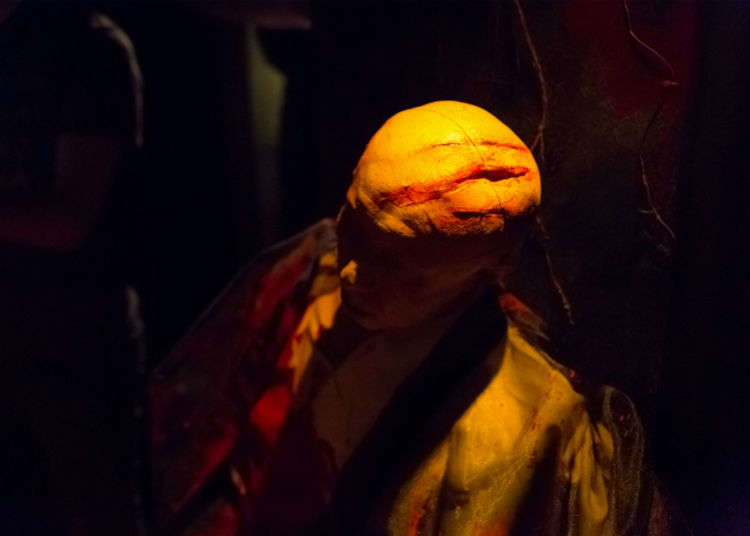 After the story finished, the doors in front of us opened slowly, revealing a dimly lit entryway with red walls. I tried to sneakily move to the back of the group to safety, but was called out and forced to the front of the foray into the spirit world. The ambient sounds and music began to kick in and my senses began to heighten. I could hear the screams of other patrons from a few rooms ahead of us and I knew I would soon have to face whatever terrors crossed their path.

I began to scan the room for any possible jump scares and I bravely walked forward (was pushed forward by my group), however that was a mistake as was focused in the wrong direction and jumped at the sudden scream that echoed the room. They got me. The haunted house got me good.

In the next area, we were greeted by metallic structures covered in the blood of distorted bodies that covered the room. Not wanting to accompany them, we quickly moved to the next area where we were finally face to face with a ghostly woman, looming over Shoko's child.

Can We Make It Back Alive? 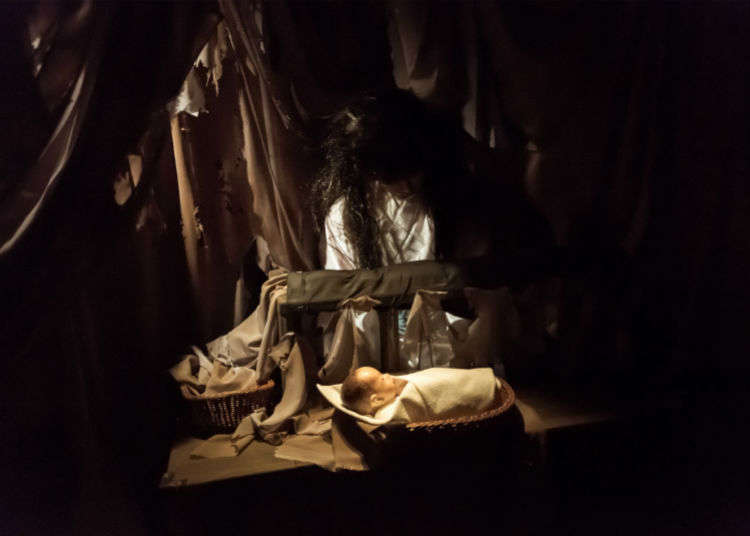 The woman had matted hair and a pale face, moving sporadically over the baby. She asked us to take the child and I reluctantly complied. Cradling the baby in my arms, I was surprised that it had a good amount of weight and at the amount of detail they put into it. Now that our mission to find the baby was complete, it was time to continue through the spirit world and return the baby to Shoko.

What followed was a heavy amount of screams and a perfect mix of ambience and shocking scares. A ghost that resembled the woman that loomed over the baby in the early part of the house was now hunting us as we proceeded through the rooms at a quickened pace. At one point, she appeared behind an enclosure and aside from her ghastly visage, we assumed we were pretty safe. Nope! She somehow seemed to have gone through the wall and began to chase us as we ran in terror. 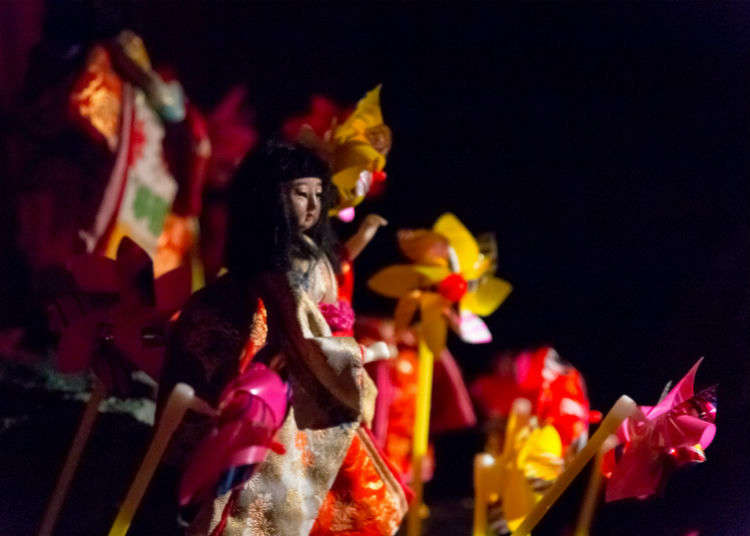 After escaping the ghost several times, we finally made it to the exit where we found Shoko. Arms stretched out to receive her child, we thought we were safe. I laid the baby down in it's crib, finally relieved to exit the nightmare when one of the biggest scares of the entire attraction sent me flailing towards the exit and back into the safety of Tokyo.

Overall, it was an amazing experience and I'm excited to try it again. Apparently, there are two versions of the attraction: a "light" scare version, and an extreme version and I can't wait to try that one out! So if you find yourself in the Tokyo Area this summer, make sure to head down to Tokyo Dome City and experience Akanbo Jigoku yourself. Just make sure to make it back in one piece.