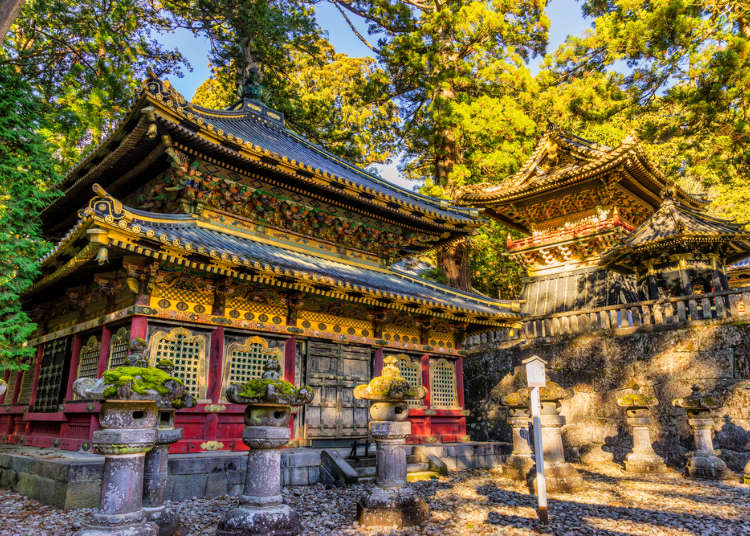 Shrines and Temples of Nikko is a beautiful world heritage site that consists of various shrines and temples in and around Nikko, just as the name suggests. Among them, eight buildings alone belong to the famous Toshogu Shrine, along with 34 designated national treasues and 55 structures, all of them unique and elaborately crafted works of art. 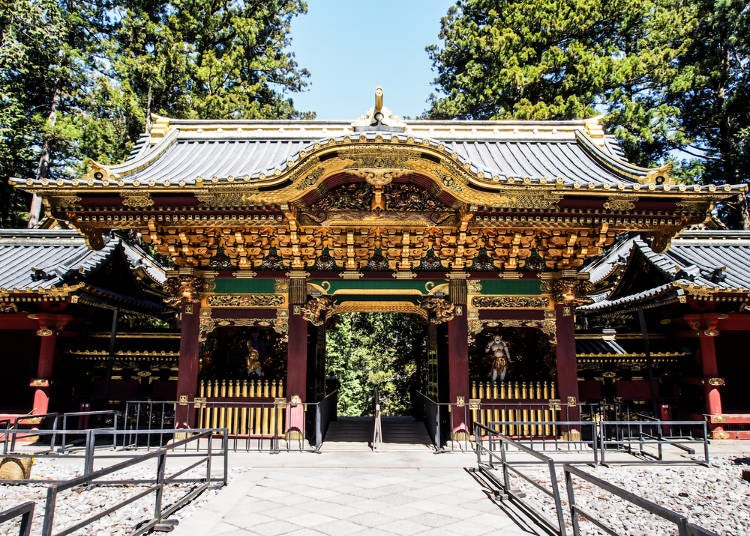 2016 celebrates the 400th anniversary of the deification of Tokugawa Ieyasu, the founder of the Tokugawa Shogunate, as well as his enshrinement at Toshogu.
As you enter the shrine grounds through the large stone gate called a torii, you'll see the magnificent five-storey pagoda to your left, and an admission reception just a little further ahead. A information center where audio guides, available not only in Japanese but also in English and Chinese, can be rented for a small fee is located right behind the front gate. This guide provides shrine visitors with detailed and interesting information about 35 different items and buildings

The Three Sacred Storehouses and The Three Wise Monkeys 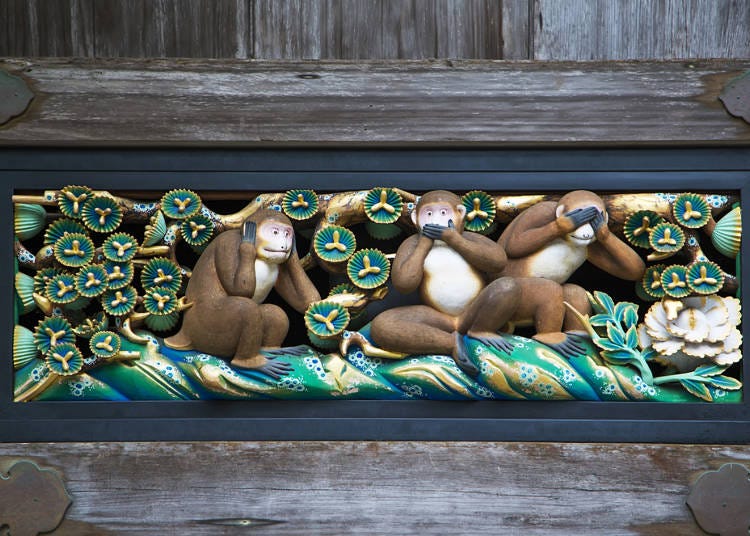 The first thing that comes into view when entering the ground of Toshogu are three distinct buildings that are also known as the "Three Sacred Storehouses". Harnesses and costumes are kept inside to be used in the shrine's spring and fall festivals, while the famous carving "The Imaginary Elephants" can be seen right under the roof. On another building, the engraving of the "Three Wise Monkeys" catches the eye of many a visitor. They stand for the old teachings of childhood: speak no evil, hear no evil, see no evil - the last one is also often exchanged for "do no evil." This monkey sculpture has eight different sides which are said to represent a human life. (From June 2016 to March 2017, The Three Monkeys are under rennovation.)

Yomeimon and the Sleeping Cat 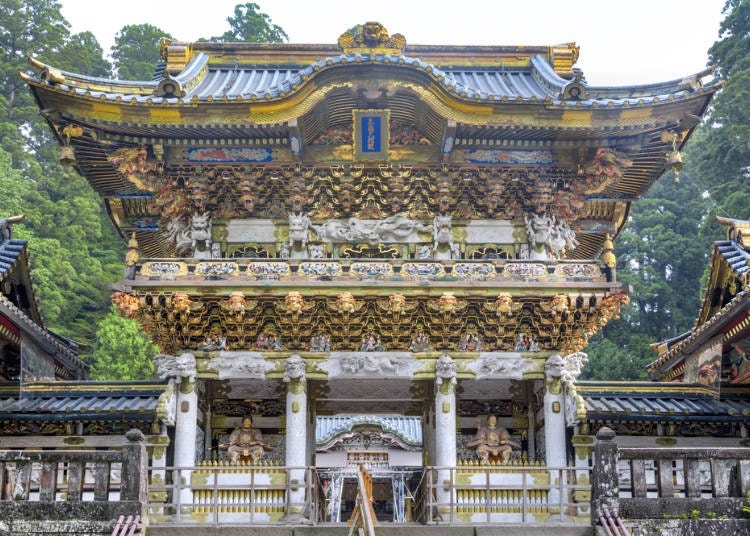 As of June 2016, the gate called Yomeimon is undergoing massive renovations. Representative of traditional Japanese aesthetics, the Yomeimon is often called the most beautiful shrine gate in all of Japan. 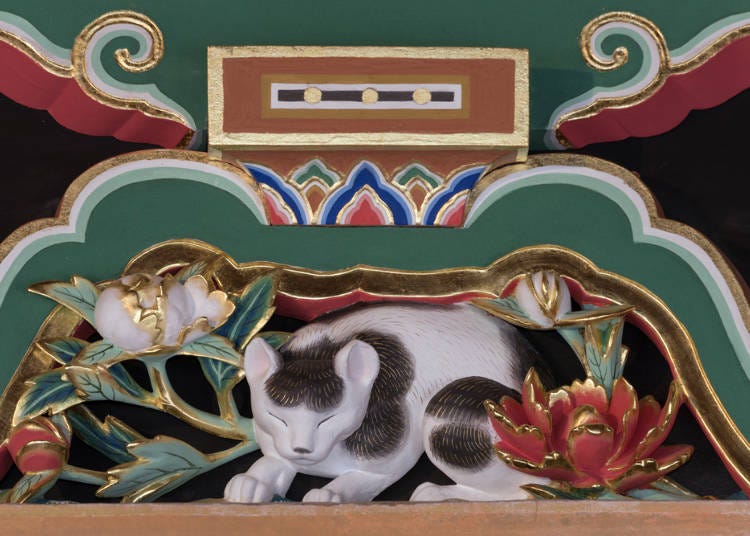 Another famous "resident" of the Nikko Toshogu is the Sleeping Cat, protecting the rear shrine. "Nikko" itself means sunlight, so it is only natural that the sleeping cat is taking a relaxed nap while bathing in warm sumlight - a scultpure that is said to symbolize peace. (The photo shows the Yomeimon as it will look after the renovations, which are scheduled to last until 2019.)

The Stone Steps Behind the Rear Shrine 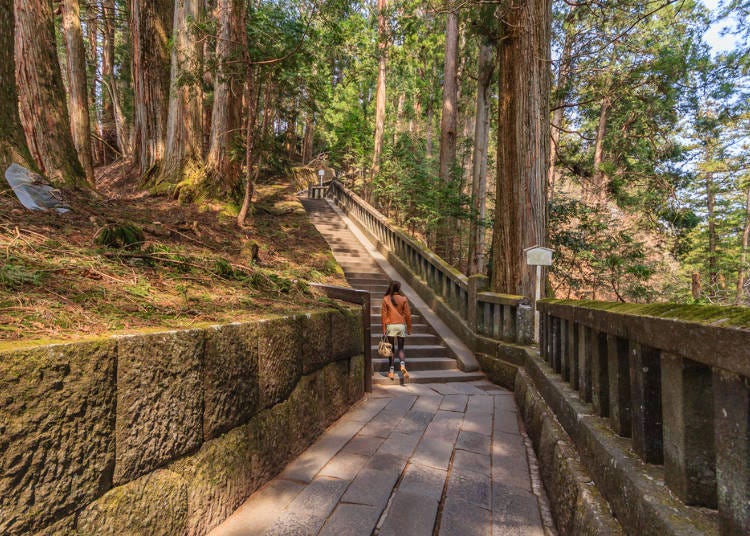 Behind the rear shrine called okumiya, which contains the tomb of Tokugawa Ieyasu, are the famous 200 stone steps. Every step is made out of a single stone, as well as the long handrailing along the stairs, which is carved from one single boulder. Passing through the torii, you will come upon the treasure house called gohozo, where a lot of old, important imperial edicts and other documents are stored. Further up the stairs is the okumiya haiden, a place that only the Shogun himself was allowed to enter, a pagoda containing the sarcophagus of the ruler himself. Close to this pagoda stands a sacred tree called the kanaesugi which is said to grant people's wishes.

The Main Shrine of Yomeimon 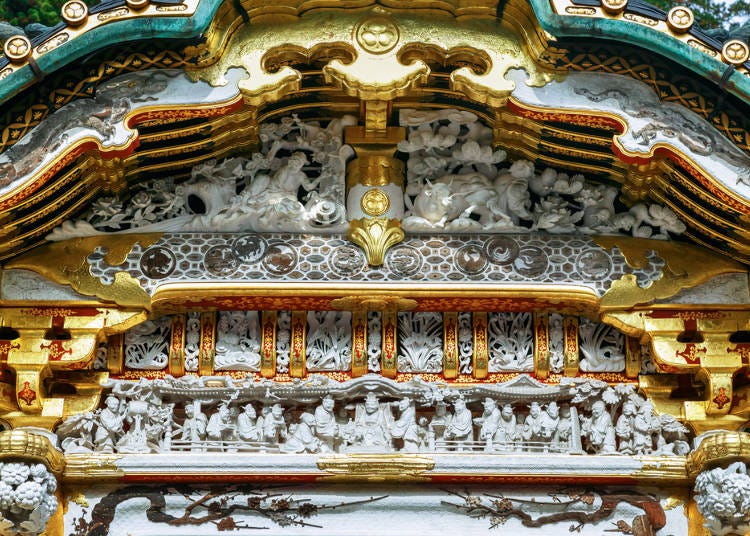 The main shrine, called honden, is located within the Yomeimon. It can be visited but photography inside the main shrine is forbidden. The main shrine is fashioned with many beautiful carvings of a variety of animals. Since it can be quite crowded around the shrine and its amazing features thus hard to see, we recommend visiting early in the morning. To the left and right are the worship halls called Shogun-Chakuza-no-Ma and Hoshin'no-Chakuza-no-Ma which are definitely worth a look even if one cannot enter the halls directly. 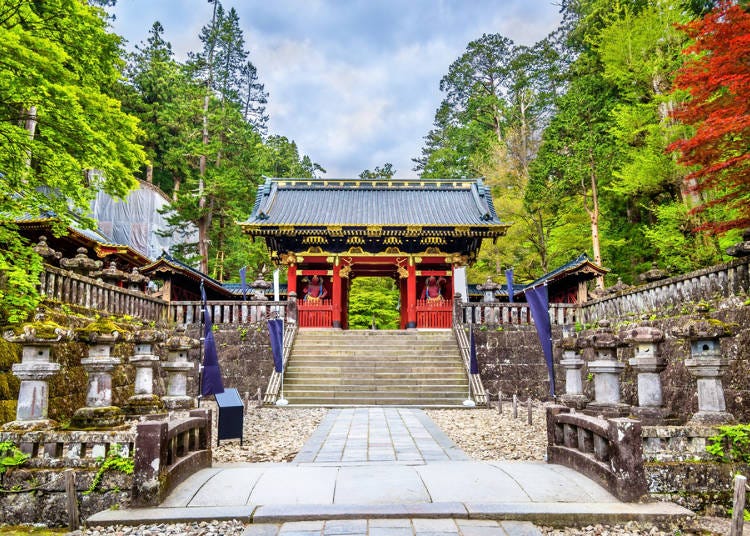 The Grand Procession is carried out every year on the 17th and 18th of May.
On the 17th, the Shinji Yabusame, or horseback archery festival, attracts a lot of attention from the festival visitors, as well as the ancient ritual called Yoinarisai, the procession three portable shrines called mikoshi, of the Nikko Futarasan Shrine - an amazingly spectacular sight to see.
The majority of visitors come on the 18th of May, however, to see the 400 year old tradition of the procession of samurai. The solemn atmosphere of the event gives an authentic glimpse of the power of the Shogun of old.

TOBU RAILWAY CO.,LTD.
5 Reasons to Visit Nikko: Japan's Mystical City, Rich in Nature
Experience the Edo Period at "Edo Wonderland Nikko Edomura!"
Guide to Nikko area's famous sightseeing locations and activities...
*This information is from the time of this article's publication.
*Prices and options mentioned are subject to change.
*Unless stated otherwise, all prices include tax.