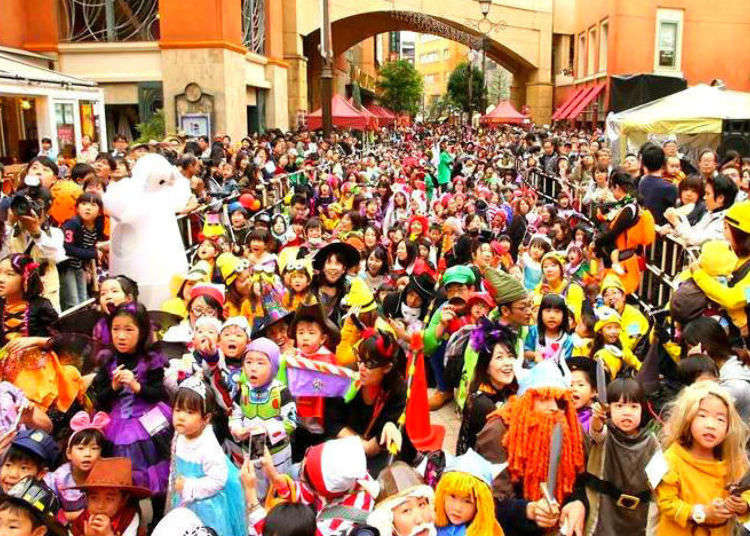 Without a doubt, Kawasaki City is one of the quirkiest neighborhoods in Japan. Located in Kanagawa Prefecture in the south of the Tokyo metropolis, it attracts people from all over the world especially for its Kanamara Festival in spring and Halloween Parade in fall. With a reputation for its uniqueness, the area is one of the most exciting places in the country.

You can get to Kawasaki in less than 30 minutes from central Tokyo, and you will want to get there bright and early, as the Halloween festivities go on all day and there is so much to see in and around the event space!

Revel in a Full Day and Night of Halloween Fun in Kawasaki! 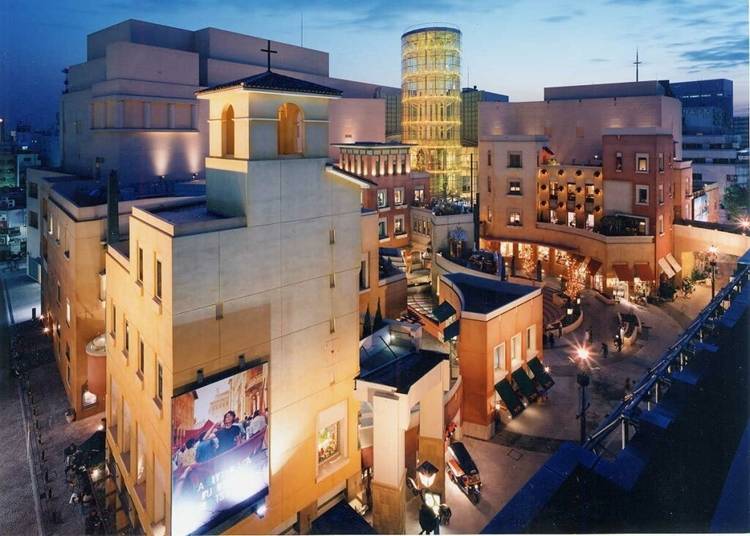 Before the Halloween parade begins, soak up some of the other events happening around Kawasaki Station! The fun starts from 10:00 and includes: kimono rental and dressing services available until 17:00 at Tohteru Honten (3,000 yen); a free kimono dressing and photo experience at Le Front (60 minutes, starting after 11:00); free sake tasting on offer at Atre; and much more besides. Make sure you don’t miss the chance to enjoy traditional Japanese comic theater called kyogen, scheduled to be held at Kawasaki Nogakudo on Saturday the 27th and performed by an actor who is known as a living national treasure. Most restaurants inside LA CITTADELLA have menus in seven languages so you can order at ease. 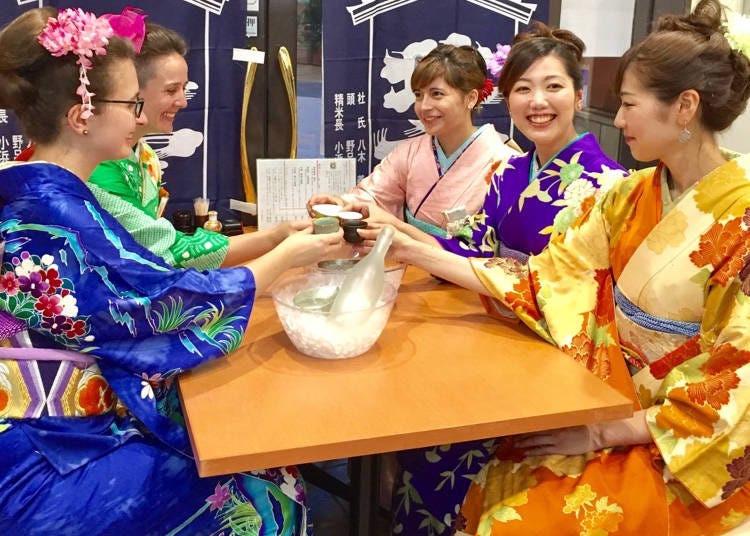 You can even participate in the stamp rally for additional rewards! These include a variety of Kawasaki’s regional specialty goods, local sweets, rice crackers called daishimaki, stainless-steel tableware, glass paperweights featuring images of the factory zone at night, and other items made by local artisans. Just collect three or more stamps from any of the nine participating tourist attractions and then apply through the Kawasaki Halloween app. For more information visit the “Kawasaki City Travel Guide” Sightseeing Stamp Rally page, which has all the details.

Be sure to check out the official Kawasaki Halloween app 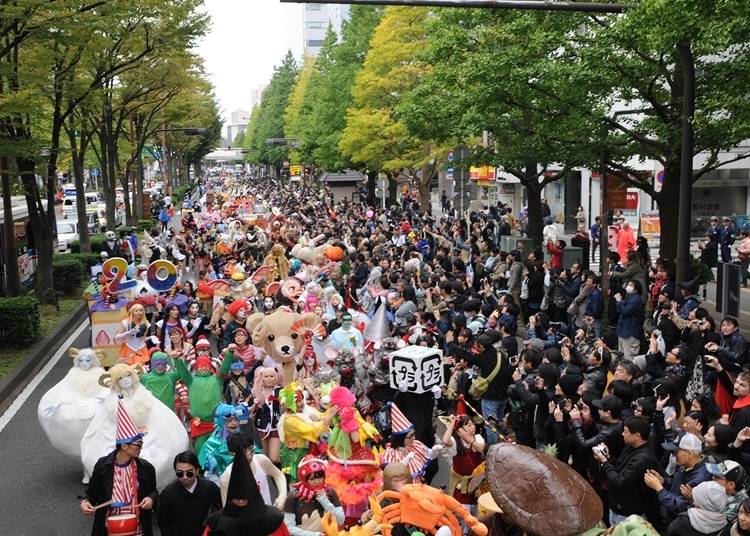 This year, Japan’s biggest Halloween parade—expected to draw some 2,500 participants—will showcase some of the most elaborate costumes to date.

On October 28, standards will be especially high as the marching contestants compete for the best costume award—a whopping ¥500,000 (about $5,000)—the largest in the event’s 22-year history. 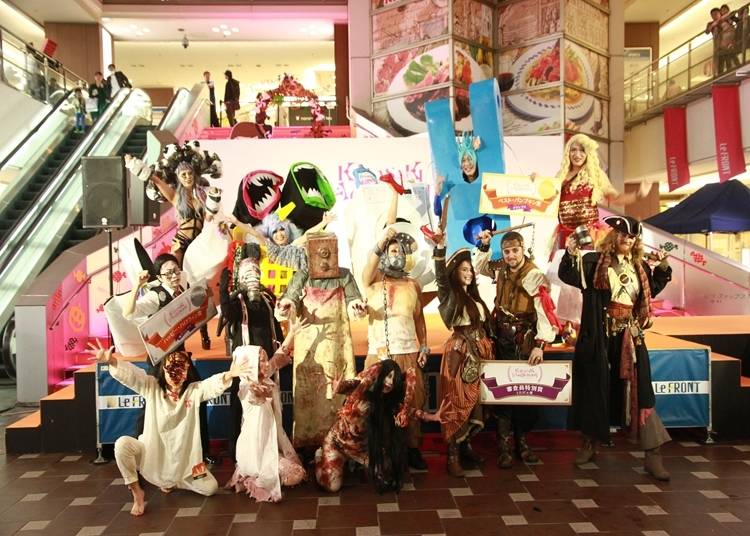 Registration for the parade and contest costs ¥1,000, but partying on the side with 130,000 other participants is totally free.

For those who don’t want to be swallowed by the spooky jamboree, an exclusive space that offers a full view of the parade will be reserved for visitors from abroad who buy tickets in advance.

The parade will take place around the East Exit of JR Kawasaki Station. For more details, check out the event’s app, which also provides information about the Kids Parade, Halloween flicks showing at CLUB CITTA’, Dancing Pumpkin after party, and other events happening in October.

After the Parade, Explore Kawasaki! 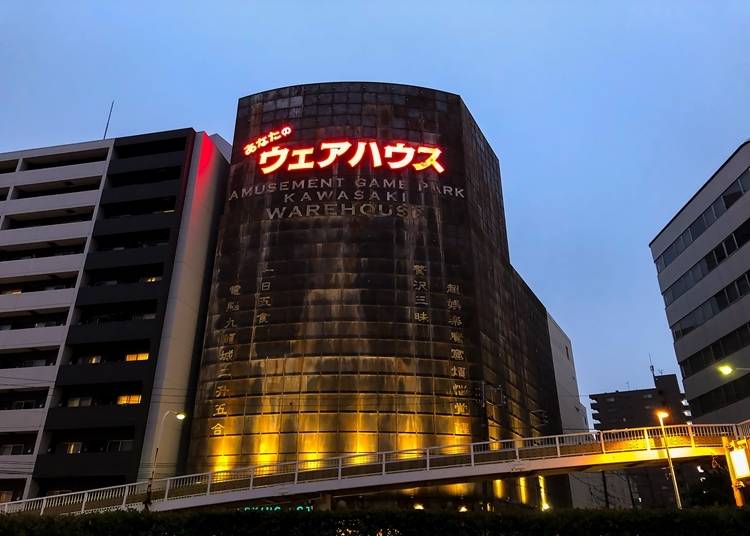 Kawasaki Warehouse
Those who enjoy the spooky ambiance of Halloween will also appreciate Anata no Warehouse for its eerie decor, which is located within easy walking distance of the Halloween event area. Modeled after the legendary Kowloon Walled City in Hong Kong, this multi-story amusement center and its rusty facade is hard to ignore in the midst of modern high-rise buildings.

As you approach a sign banning entry to those under 18 years of age, a set of steel doors bursts open to a dim red-lit antechamber.

Another door leads to a dingy corridor that immerses you in a downtown setting filled with synthesized sounds of rats and indecipherable dialogue. Painstaking details bring to life grimy windows that look into a room with a scantily clad mannequin lying on a bed, neon signs, frayed posters on walls, laundry hanging on a clothesline, and a replica of an open-front meat shop—all recreating the lawless Kowloon Walled City where crime, commerce, and community once coexisted. 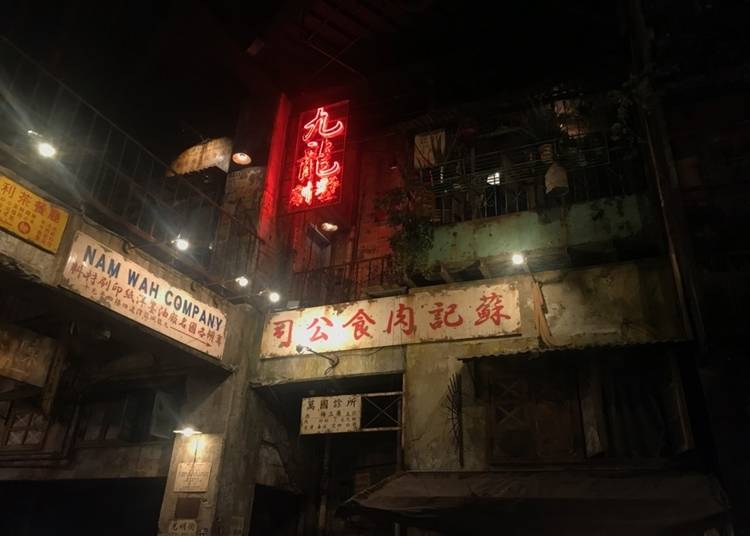 An arcade can be found between the second and fifth floors, boasting a myriad of entertainment options: retro games from the 1980s, the latest video games, music games, crane cranes, pachinko (Japanese mechanical pinball), darts, billiards, a spacious internet cafe, and more. As it is a popular spot for gamers, cosplayers, and Instagrammers, visit on weekdays to avoid the crowds and experience optimal creepiness. Entry is free throughout the year. 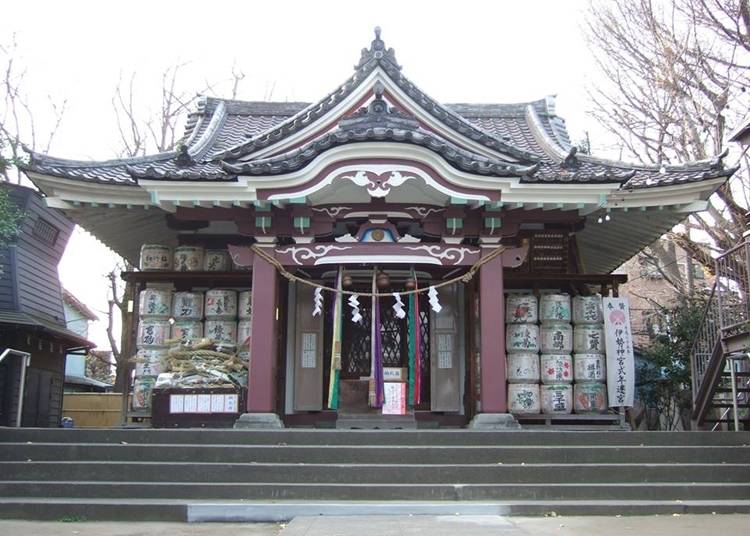 Kanayama Shrine
Kawasaki is also home to an unusual Shinto shrine and a famous Buddhist temple. Every spring, 50,000 spectators gather around Kanayama Shrine to watch three mikoshi (portable shrines) with phallic effigies of varied colors, sizes, and shapes get carried around the neighborhood. This eye-catching Kanamara Matsuri or “Festival of the Steel Penis” has become increasingly popular among international visitors.

But there is a serious meaning behind this surprising Japanese festival. Kanayama Shrine canonizes deities of mining and blacksmith, and legend has it that these gods cured a burn on the lower body of Izanami—the goddess of creation and death—that occurred when she gave birth to the god of fire. This folklore led sex workers at nearby post stations during the Edo Period (1603–1868) to pray for protection against diseases. This faith remains strong as the shrine and festival continue to promote good marriage, fertility, safe childbirth, and play a role in boosting sexual health awareness.

Even if you can’t make it to the annual festival on the first Sunday of April, you can still visit the modest shrine, located within the compound of Wakamiya Hachimangu, and pray to the phallic statues any day of the year. 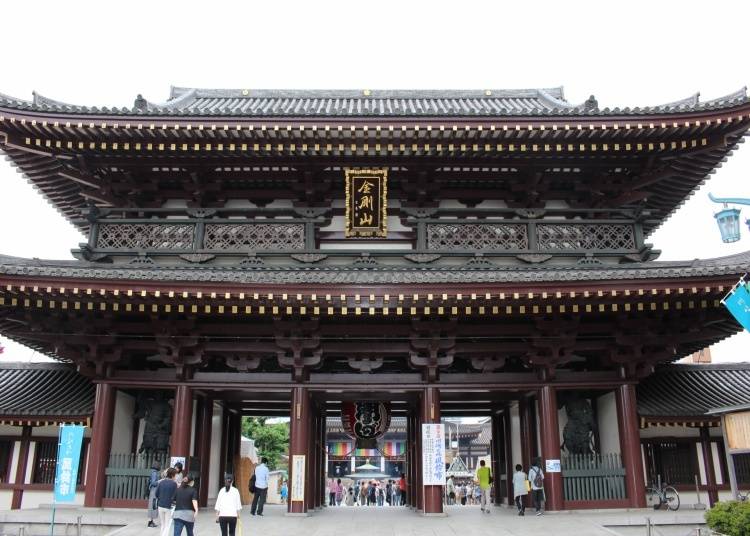 Heigenji/Kawasaki Daishi
Within walking distance is the large Buddhist temple of Heigenji, commonly known as Kawasaki Daishi. Believed to ward off evil, it is one of the top three destinations in the country for hatsumode, a nationwide custom in which people visit a shrine or temple at the start of a new year.

Beginning New Year’s Eve and usually ending around January 5, more than three million worshippers form a long queue from the nearby train station to the temple. Both the path and temple grounds fill with a couple hundred street vendors that offer sweets, savories, beverages, and toys. On ordinary days, the approach can be pretty quiet, except for the rhythmic beats of chopping heard from several candy shops. These sounds are part performance and part byproduct of creating taffies called tontoko-ame—a local specialty. 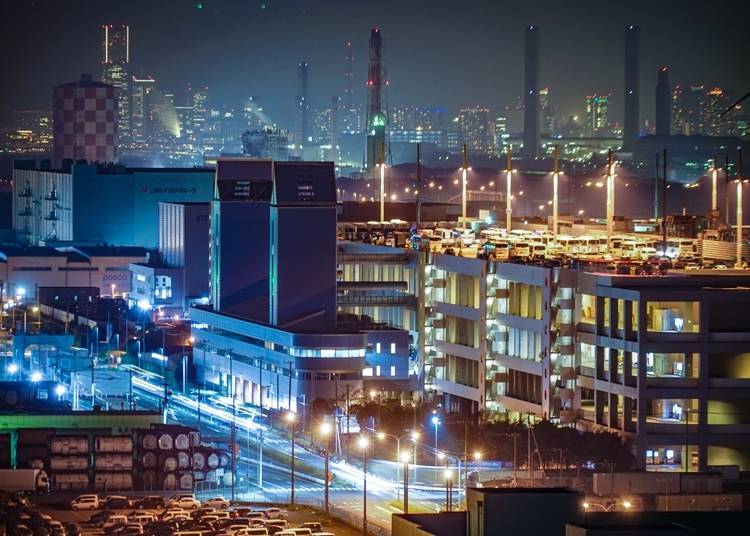 Kawasaki’s Industrial Side
What better way is there to end your day in Kawasaki than visiting factories after dark? While this may sound absurd, kojo yakei (industrial nighttime sightseeing) is an activity that has been gaining popularity over the past decade. Several bus tours and boat cruises take tourists out to Kawasaki’s industrial waterfronts on the shores of Tokyo Bay. Passengers join not to learn about how the plants work but to appreciate the industrial aesthetics. Under the night sky, gleaming lights that reflect off intertwining metallic pipework and steam that rises from smoke funnels create what look like gigantic deserted outdoor art installations.

Independent travelers can also explore by themselves. Kawasaki Marien is a good place to start since there is an observation deck on the tenth floor with free admission that offers a 360-degree panoramic view of the sprawling industrial area, as well as the city lights of Yokohama and Tokyo.

Pocketalk makes it all easier 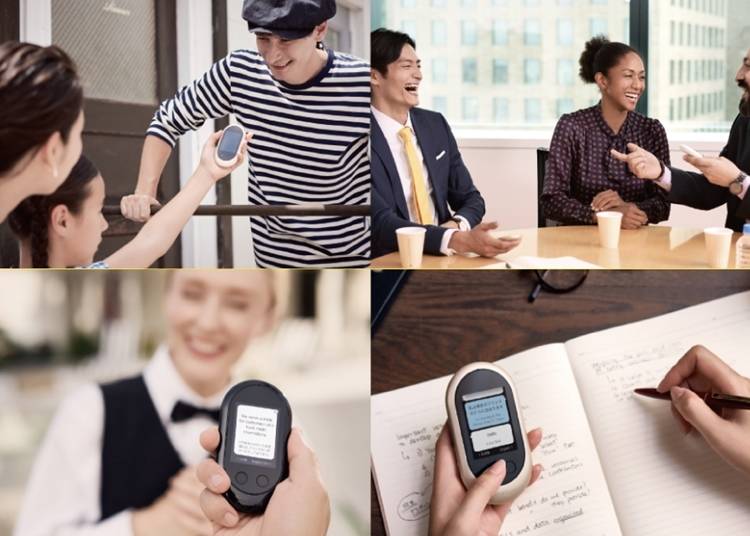 To make itself as accessible as possible, most major hotels around JR Kawasaki station are renting out thePocketalk translation device—which can interpret 74 languages—during the whole month of October at a discount. This means that non-Japanese speakers can delve into the depths of Kawasaki soon after arriving at nearby Tokyo Haneda Airport.
You are spoiled for choice when it comes to the wide range of activities and places that Kawasaki offers, but no-matter where you visit you can say sayonara to any language barrier with this pocket interpretation device. Check the Kawasaki Halloween Official Website for details.

Kawasaki Halloween Official Website (Tourist Information)
Reserve an exclusive space that offers a full view of the parade
Reserve to watch a kyogen performance
*This information is from the time of this article's publication.
*Prices and options mentioned are subject to change.
*Unless stated otherwise, all prices include tax.