HOME Hokkaido Hokkaido Shiretoko Some Like it Hot: The 10 Best Places in Japan For a Volcanic Experience 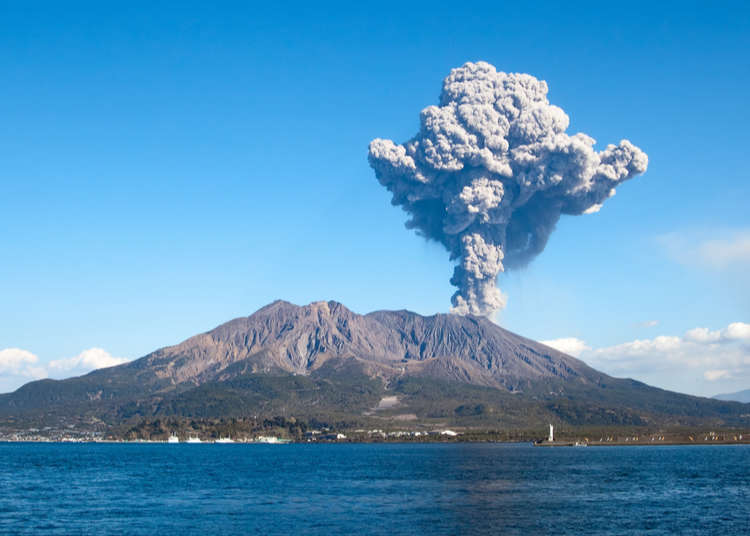 Some Like it Hot: The 10 Best Places in Japan For a Volcanic Experience

You are probably thinking to visit Mt. Fuji when you visit Japan, but did you know it is a volcano? And an active one at that!

In fact most mountains in Japan are either active or inactive volcanoes. You will definitely be planning to go to an onsen, but a natural onsen actually is a hot water spring – which quite often is due to geothermal activity in the ground, such as volcanoes!

Japan has around ten percent of the world’s active volcanoes; that means over a hundred volcanoes!

Another result of volcanically active ground is the hell valleys - land with scalding hot water springs, sulfuric gases, and a complete lack of vegetation and wildlife. Certainly amazing to look upon, but deadly to walk upon.

While Mt. Fuji holds Japan’s title of being the highest mountain, and accordingly it has had a big impact on the Japanese consciousness over time – Hokusai’s The Great Wave being a good example – Japan also has a volcano which has been creating one of the world’s youngest islands! Nishinoshima started erupting in 2013 for the first time in 40 years and became an island, which even as of 2017 was still growing. As the land it is producing is quite fertile, and it is already attracted birds, perhaps one day we will see vegetation taking root; however it will probably be a long time until it gets its first human tourists, especially as it is located quite far away. 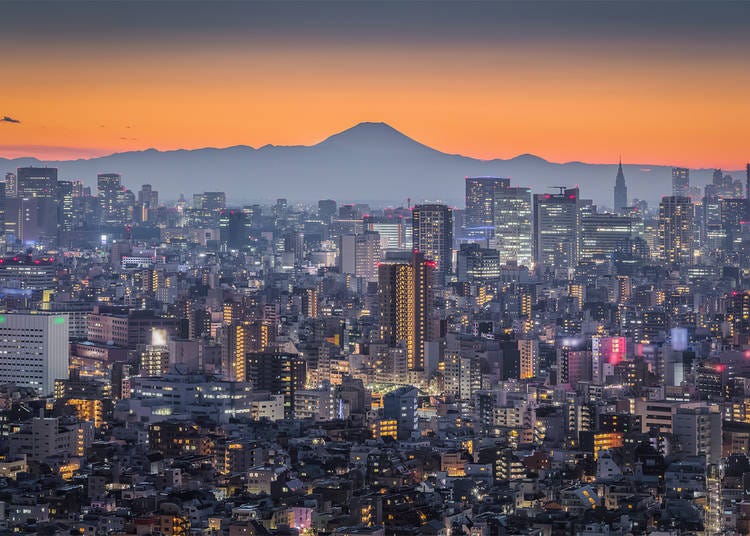 Tokyo night view with Mt. Fuji in the background

Although words like ‘volcano’ and ‘hell valley’ can sound a bit scary, and we are certainly not suggesting you should go anywhere near an actively erupting volcano. They are really fascinating to see and experience! There is more to volcanoes then deadly eruptions, as well as creating iconic landscapes like that around Mt. Fuji, and young new islands like Nishinoshima, there are massive calderas, hell valleys which are safe to visit, natural onsens (including onsens where wild monkeys go to bathe), multi-colored hot springs (the kind that are too hot to use as an onsen) and even volcanic lakes. So let’s have a look at the best spots across Japan! 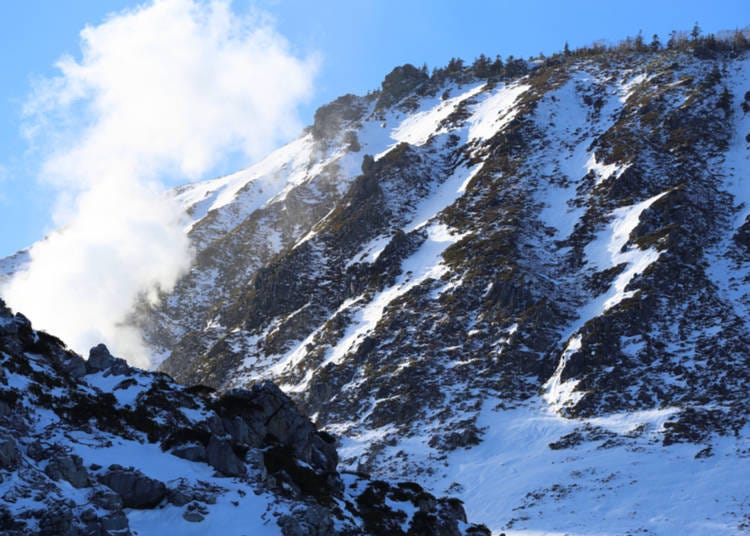 Mount Io
This is one out of a group of Hokkaido's most active volcanoes located in Akan National Park, and its name literally means sulphur mountain! It will be no surprise then that there is a lot of sulphur here, which you can visit, and in addition you can try the nearby Kawayu onsen (which has particularly acidic water). Mt Io was responsible for the creation of the Shiretoko Five Lakes, which some have likened to the fingerprints of god, and which are great for hiking. 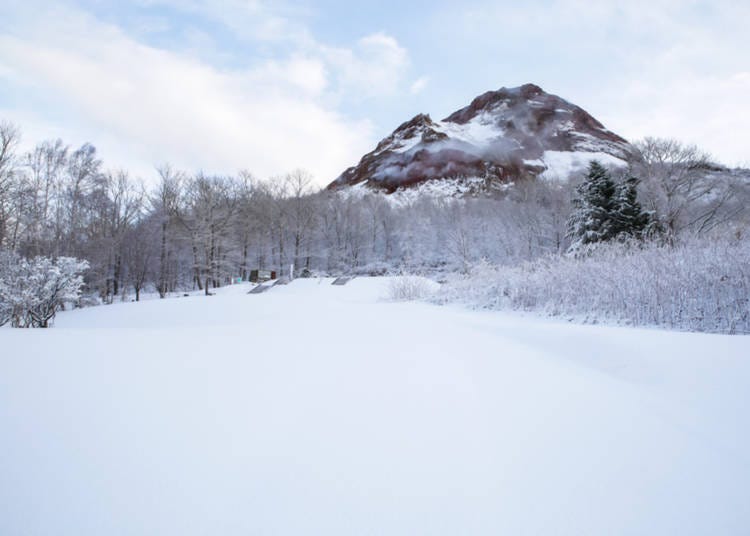 Shikotsu-Tōya National Park
This park is named after the volcanic caldera lakes of Lake Shikotsu and Lake Toya. Lake Shokotsu is the second deepest lake in Japan and is located in a caldera which was formed tens of thousands of years; still today there are three volcanoes on the rim of this very same caldera. Lake Toya is in an even older caldera which has the volcano Mt. Usu perched on its rim. This national park is famous for the spectacular views of these lakes and the active volcanoes nearby, in addition there is an amazing hell valley near Noboribetsu Onsen that has vents in the ground where steam is escaping, and sulphurous ponds. It is also the source for Oyunuma River, a literally hot steaming river winding its way through a nearby forest. 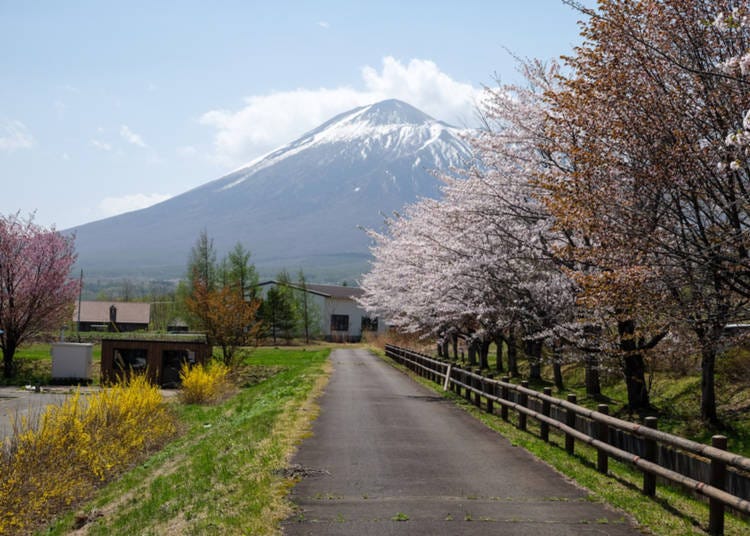 Mount Hachimantai in the spring

Mount Hachimantai
Located in the Towada-Hachimantai National Park, this mountain is the highest peak out of a group of volcanoes all located on a volcanic plateau. It was included in a book of Japan’s 100 famous mountains. Around this mountain, and this park there are many walking trails and onsens, but in particular around the Goshogake Onsen there are fixed walking paths for visitors to see a really steaming hell valley. Besides the usual steaming vents you can see Japan’s biggest mud mountain, this bubbling mud monster is only a few feet tall, but it is a truly nightmarish creation!

Mount Akita-Yakeyama
This is a fairly small volcano also located in Towada-Hachimantai National Park, with fairly frequent small eruptions it is also known for the acidic water located nearby in its own hell valley. As hell valleys go, it looks a lot like another planet with numerous steam vents, and dead black and grey ground. The hot waters here feed nearby onsens with Japan’s most acidic waters (pH 1), while the rocks are an unusual radioactive stone known as hokutolite! 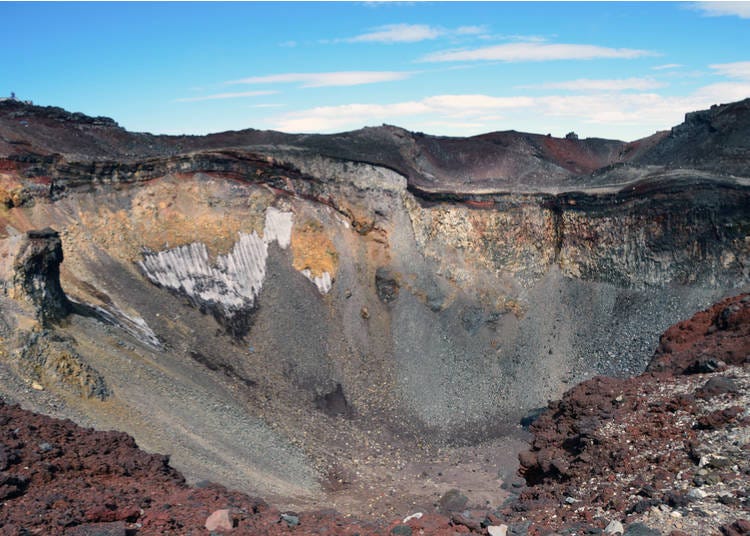 Mount Fuji
The most famous mountain in Japan, and its tallest, Mt. Fuji is literally an icon of Japan made famous in movies, paintings, and even in sweets. It hasn’t erupted in over three hundred years; the current Mt. Fuji is believed to have formed over ten thousand years ago over an older ‘Fuji’ which was much, much older. It is surrounded by five lakes, and parks, which make it great for hiking and sightseeing, and of course one of the most popular activities is climbing to the summit! 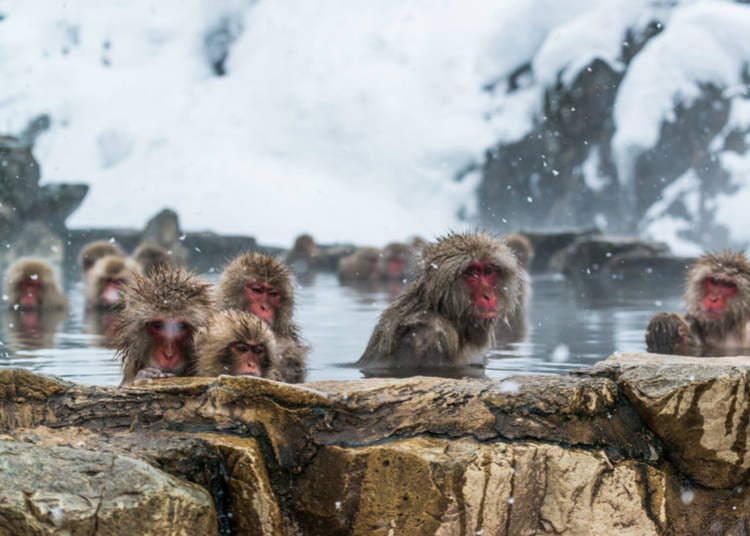 Mount Asama
This volcano, located in Joshinetsu Kogen National Park, is the most active on the island of Honshu and while it isn’t in the top ten highest mountains of Japan, it is pretty tall at 8,425 ft. It has regularly erupted over the past thirty years, and is quite spectacular to look upon as well as some impressive landscaping it has created around it such as ancient lava flows. The Joshinetsu Kogen National Park itself is made up of a number of active and dormant volcanoes, and includes the infamous Jigokudani Monkey Park. Located in a hell valley, this is where tens of thousands of visitors make a pilgrimage to a very special onsen – one where monkeys relax in the hot waters! 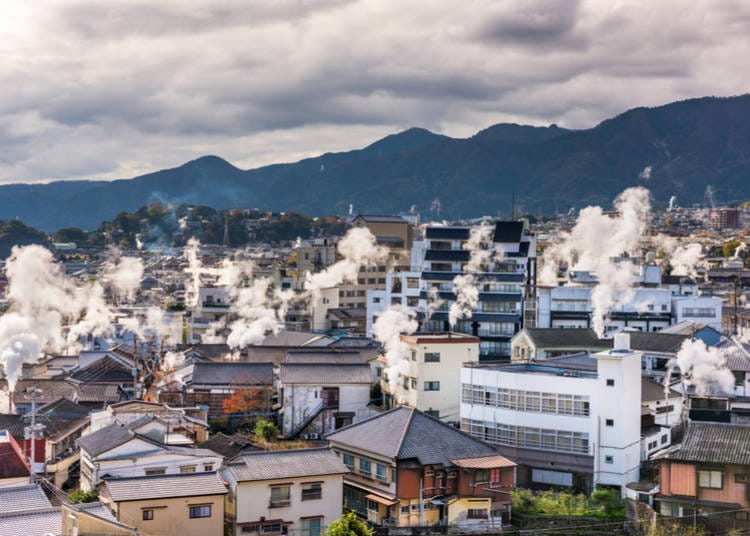 The literally steaming city of Beppu

Beppu (Tsurumi volcano)
Rather unusually we are including a city in this list, because it is an unusual city! It is practically sitting on top of Tsurumi volcano, which is made up of several mountains and has a massive source of hot spring water – meaning that the whole city is practically steaming all the time. The amount of water gushing from the ground is only surpassed by Yellowstone National Park in the whole world, and its nearly 3,000 hot spring vents represent 10% of those found in Japan. It is also the location for the Hells of Beppu, eight hot springs which are of different colors, including red and blue. 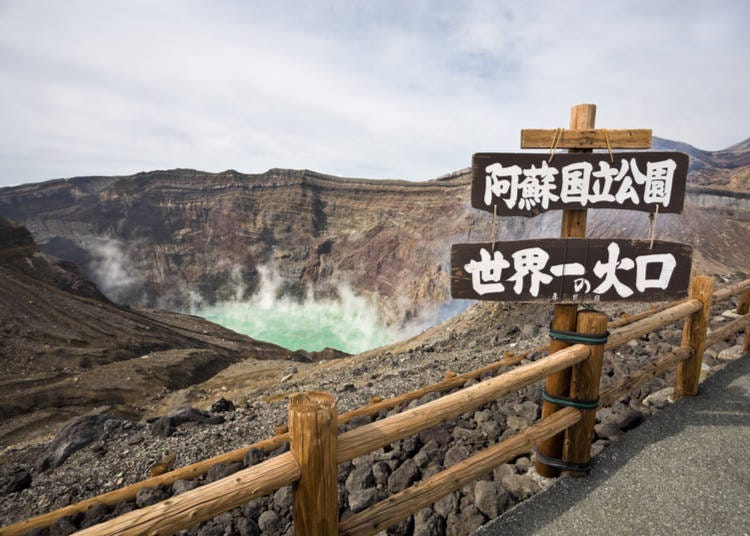 The Caldera of Mount Aso 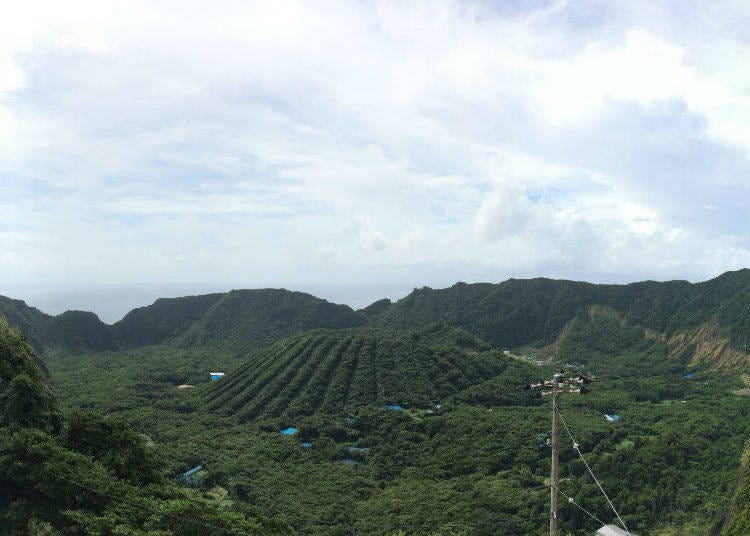 Aogashima
This island which is 200 miles south of Tokyo is one of the most difficult places to reach in Japan; the people living here are literally living on top of an active volcano. The last time it erupted, in 1785, half of the population died. With a current population of under 200 it is also the smallest village in Japan, and can only be visited by flying to nearby Hachijojima Island and then taking a ship or helicopter to Aogashima. The island itself is surrounded by stunning steep cliffs, while the island itself is a caldera.

Nishinoshima
Unfortunately, this isn’t an island that you can visit, but it can’t be left out of any list of volcano islands. This is of course the youngest island in the world, still in the midst of being created it has been gradually expanding over the past five years.

Japan is famous for being a land of earthquakes and part of the Pacific Ring of Fire and this inevitably includes being a land of volcanoes too. It is pretty special when we think about how much Japanese culture has been impacted by the existence of volcanoes, ranging from the iconic Mt. Fuji which looms large within the consciousness of society right down to Japan having the world’s young island. Volcanic activity led to the abundance of hot springs in Japan, and as anyone who has visited Japan can tell you, going to an onsen is culturally significant. If you are ever invited to a family or friend’s home in Japan, if you go to the bathroom you will realize it is quite different to a western bathroom – the way of using an onsen has even reached people’s homes where they try to recreate the experience by having a shower and then getting into a hot bath. Without going into too much detail, there is a lot of Japanese culture which has its roots in Japan’s volcanoes and the resulting geothermal activity. Japan wouldn’t quite be Japan without its volcanoes, which although they are spectacular, they are also quite dangerous. When visiting Japan we recommend that you experience the literal heat of the earth and remember how it is a part of this country’s history and culture, but even if you just stay in Tokyo on a clear day you will be able to see the volcanic giant of this land, Mt. Fuji.

Onsen Japanese Rave About! 5 Perfect Hot Springs in Noboribetsu Onsen
*This information is from the time of this article's publication.
*Prices and options mentioned are subject to change.
*Unless stated otherwise, all prices include tax.