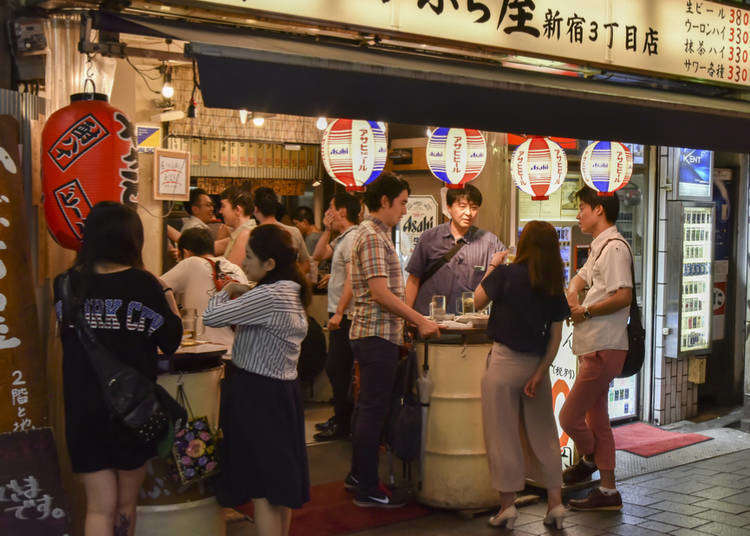 Japanese Drinking Culture is so Different! Exploring the World of Japanese Bars

Whether you want to drink while eating your favorite eats, sing your heart out with a little help from some liquid courage, or have some fancy wine while peering over the landscape of Tokyo’s night view, there are a plethora of places one can go to enjoy their favorite alcoholic beverages in Japan. Want to make some drinking friends for the night? Try a standing bar where almost everyone is a regular and willing to give newcomers a chance. Wishing that cute bartender would pay just a little more attention to you? Head on over to a snack bar. Whether you’re drinking alone or with a group, the possibilities are endless.

Feeling Thirsty? Here are 10 Types of Bars in Japan

Japan has long had an affinity for drinking. The earliest record of the Japanese enjoyment of alcohol dates back to the 3rd-century classical Chinese text “Records of the Three Kingdoms”, which describes the ancient people of Yamato drinking and dancing. At the time, the first alcoholic beverage produced in Japan was sake (rice wine), known in Japanese as “nihonshu”. This was followed centuries later by shochu from the 16th century, and then beer, which was brewed in Japan from the 17th century.

Drinking is still central today in daily life, for both social occasions such as office nomikai (drinking parties) and festivities such as hanami (flower viewing) picnics in the springtime. Read on to learn all about the different kinds of bars in Japan. 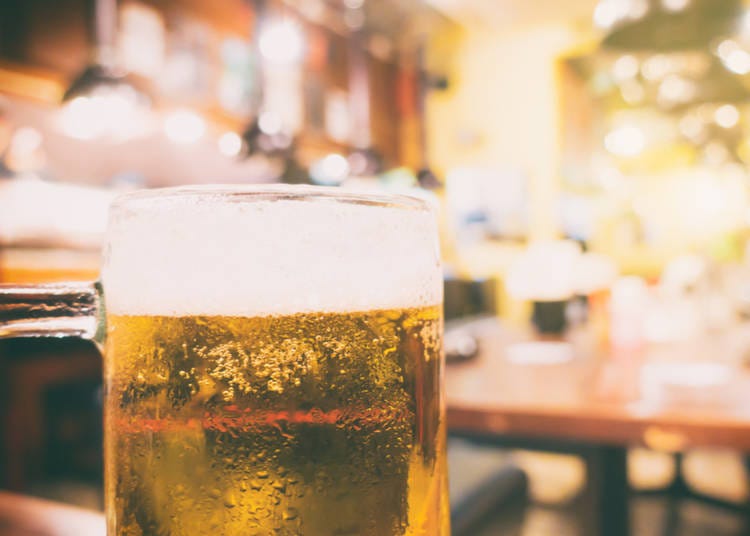 Another foreign-style drinking establishment, German beer gardens and halls are incredibly popular during the summertime in Japan. They are usually found on the rooftops of hotels and department stores, as well as on the terrace of restaurants and bars. One famous beer garden can even be found at the peak of a local mountaintop in Tokyo. Although dining al fresco can be uncomfortable in the summer humidity of Japan, a beer is a great way to escape the heat. 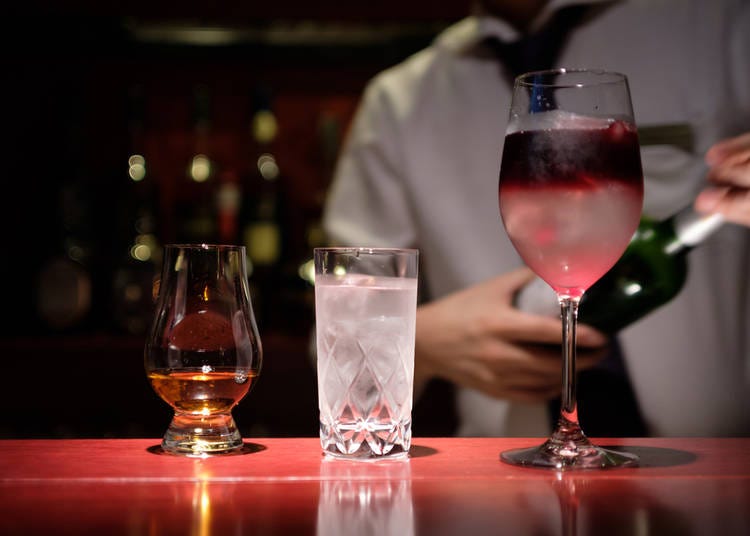 While cocktail bars have recently experienced a revival in America and other countries, artisan cocktail making never faltered in Japan and is among the highest level of craftsmanship in the world. Tokyo, in particular, is known for its cocktail bars, often found in hidden away locations, featuring hand-carved ice and elaborate concoctions served up in high-end stemware. Recently, aspects of kaiseki dining (Japan’s traditional haute cuisine) such as the use of locally sourced seasonal ingredients have found their way into Japan’s cocktail bar scene. 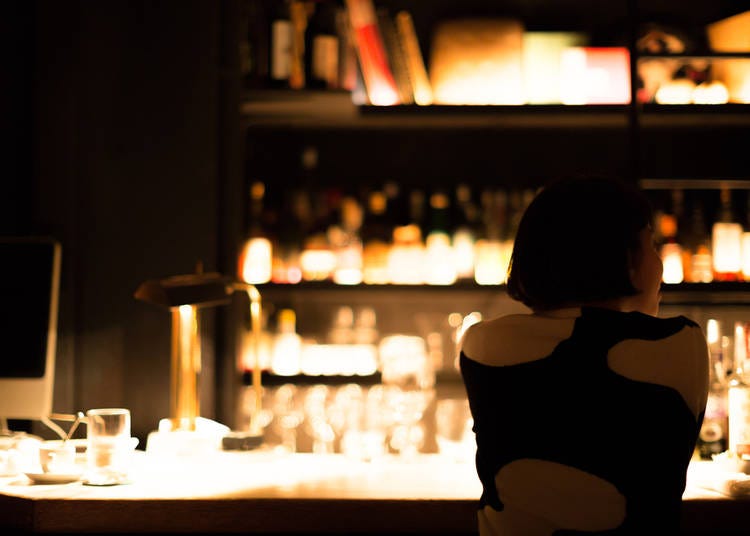 In Tokyo especially, the hotel bars found at the top of the city’s numerous high rises offer stunning vistas of the city skyline for a premium price. Although it can be a bit expensive, a drink at one of these towering skyscraper bars is an excellent choice for a special night out with high-quality drinks and bar food. Many bars offer live jazz music, and the quiet murmur of strangers’ voices in the background against the rustling piano is the perfect setting for enjoying a good drink and fantastic view. 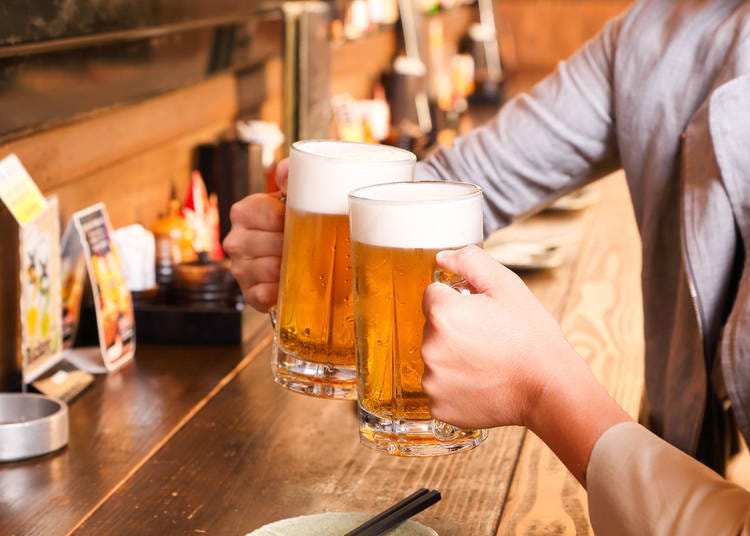 Izakaya are Japan’s traditional epicurean gastropub, a place to enjoy beer, Japanese spirits, and good food. They first appeared as sake bars during the Edo period, which over time began offering small bites of food to customers to enjoy along with their drinks. Today, they are one of the main food and drink establishments in Japan. The style may range from the traditional, where you take off your shoes to sit in a section with tatami flooring, to the modern and polished. One trait that is common across most izakaya, however, is the practice of offering “otoshi” or a small dish of food to go with your first drink that doubles as a sort of table charge. You’ll find all kinds of customers in izakaya, from college students being rowdy and playing drinking games to older men in their business suits who tend to wrap their ties around their foreheads after they’ve had a bit too much (Yes, they actually do this). A night at this type of Japanese bar is an unmissable experience! 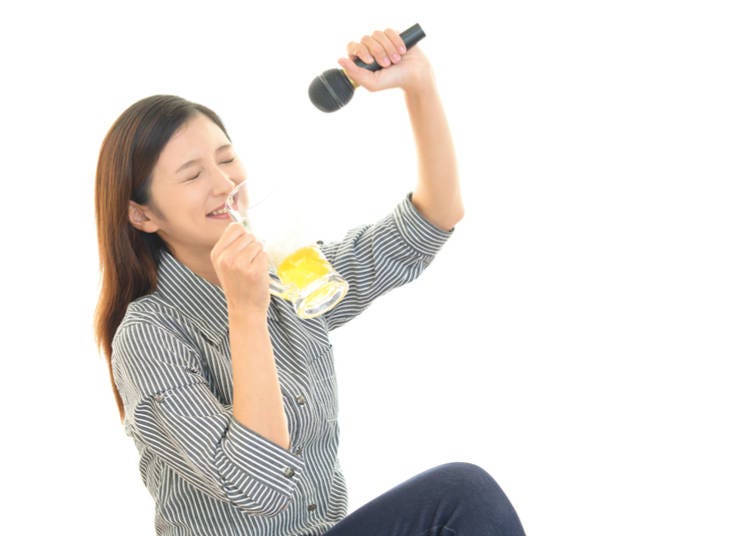 Originating in Japan, karaoke is originally short for kara no okesutora which means “empty orchestra.” While most Westerners’ experience with karaoke involves drunken singing in front of a large crowd at a bar, karaoke establishments in Japan are designed as halls of private—although not totally soundproof—rooms. They’re found all throughout Japan and typically are open late into the evening or until the early light of morning. Many karaoke joints offer a range of food and drinks, including a “nomihodai” (all you can drink) option. These are a great option for any small to large group of friends that wants to let it all out through song. Don’t worry if you’re not confident about your singing prowess. It’s all about having fun! 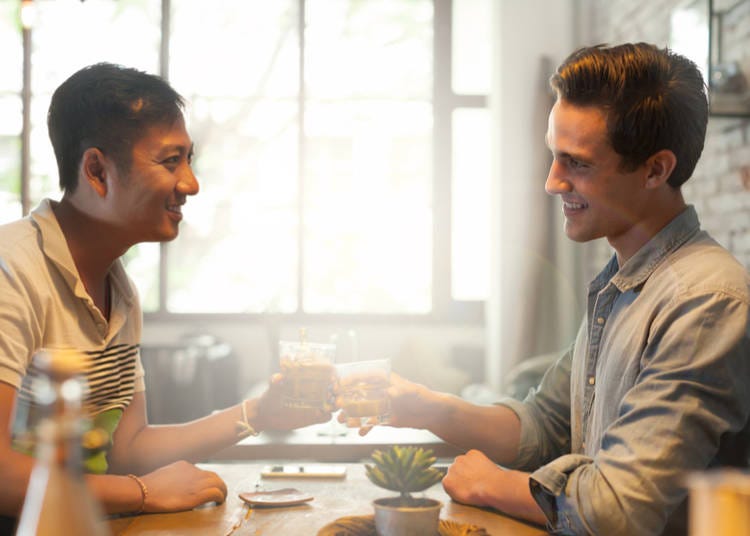 A vibrant gay bar scene can be found both in Tokyo and Osaka. In Tokyo, the Ni-chome district of Shinjuku is home to hundreds of pocket-sized bars making it the highest concentration of gay bars in the world. The bars typically seat fewer than a dozen and are known for their specific themes, which can range from the style of the bar’s interior to the types of customers served. Although a bar may seem unwelcoming if you don’t fit their particular theme, find one that fits and you’ll be warmly welcomed.

In Osaka, the primary gay scene for the under-40 crowd is around Doyama, close to the Umeda/Osaka Station complex which offers small relaxed bars, livelier clubs and drag shows, and even saunas. The people of Osaka are known for their friendliness and this definitely extends to the LGBT scene. Other gay and lesbian districts can be found in the Namba/Shinsaibashi area and the Shin-sekai area to the south. 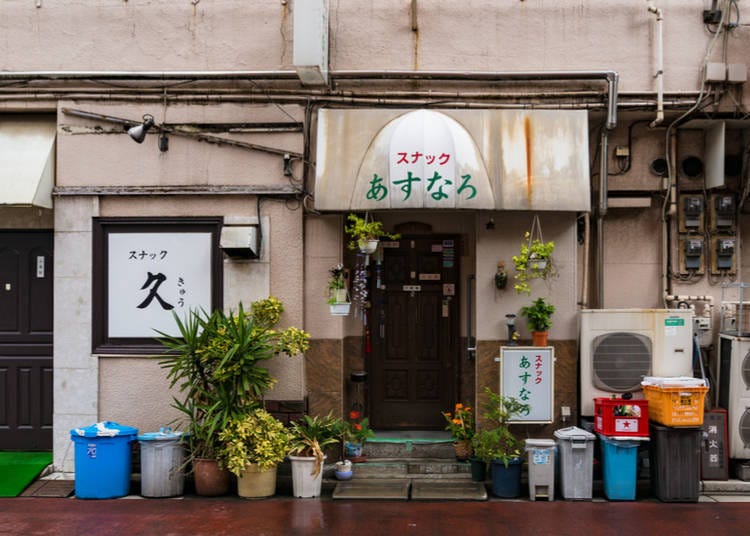 The exact definition of a “sunakku”, or snack bar, can be difficult to pin down, but it’s usually a bar run by an older woman called the “mama” who sees to the comfort of her patrons by pouring drinks, lighting cigarettes, making small talk, and singing along with them in karaoke. Although heavily associated with the over-40 crowd, sunakku have seen a revival in recent years. This may be because young people in Japan are finding the down-to-earth sunakku scene as more authentic than the overly polished bars and clubs targeted towards young people. As such, in most places nowadays, the mama is accompanied by several younger women (usually in their early 20s) to cater to the younger crowd (and possibly the older as well). The service usually costs a set amount of money per hour and are all-you-can-drink, though the drinks are usually limited to shochu and possibly one other type of drink. If you’re trying to save your money and one of the girls asks if they can have a drink, be careful because this costs you extra. Sunakku are a truly unique Japanese bar experience. 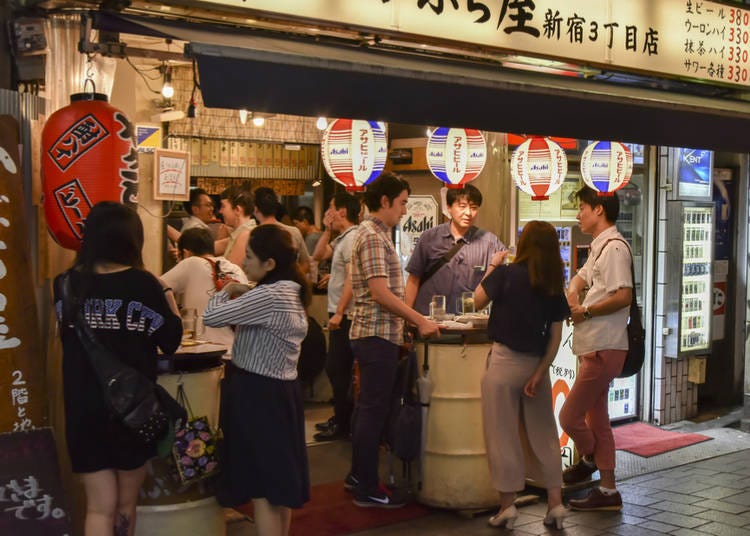 Tachinomi, or “standing bars”, offer a lively, no-frills environment for grabbing a casual drink and a few bites after work. Although these were traditionally Japanese bars catering to the working class, in modern times tachinomi establishments have become a hip place for drinking, and you can find chic tachinomi sake bars and epicurean tachinomi wine bars offering a selection of charcuterie. Tachinomi bars are usually crowded, so if you visit one, try to grab an open table or look around for a space to squeeze in. These days most local tachinomi bars are frequented by regulars, making this type of bar almost like a drinking club. No forms, no monthly fee, just walk in, order a beer and make some friends! For those tachinomiya that tend to have a high turnover rate, be sure to order drinks right away, and leave as soon as you finish your drinks, to allow other guests to enjoy the bustling experience. 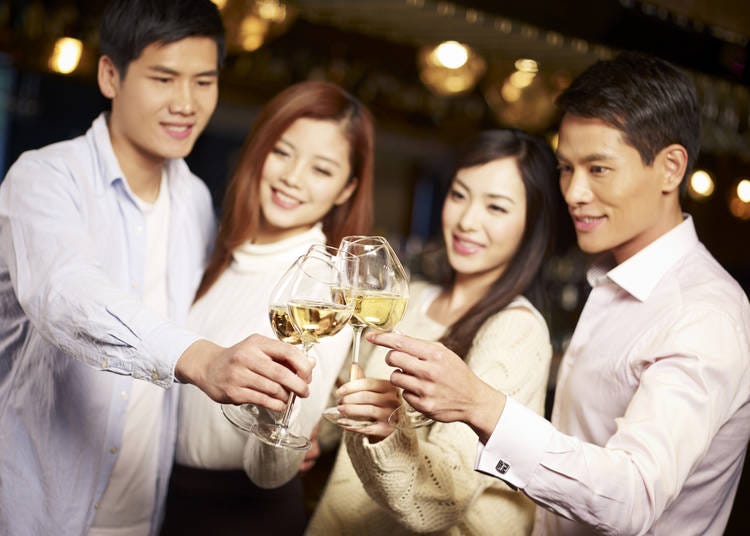 Although not traditionally Japanese, wine bars are a highly popular type of bar in Japan, serving vintages from around the world, in particular, Spanish, Italian, French, and Australian wines. This is matched by European-style food, including small plates like bagna cauda, olives, bread, cheese, and charcuterie. Japan has also been producing wine domestically since the late 1800s, mainly around Yamanashi, Nagano, Yamagata, and Hokkaido prefectures. Be sure to give one of Japan’s many domestic wines a try when you visit bars in Japan, as they are not widely available outside of the country. 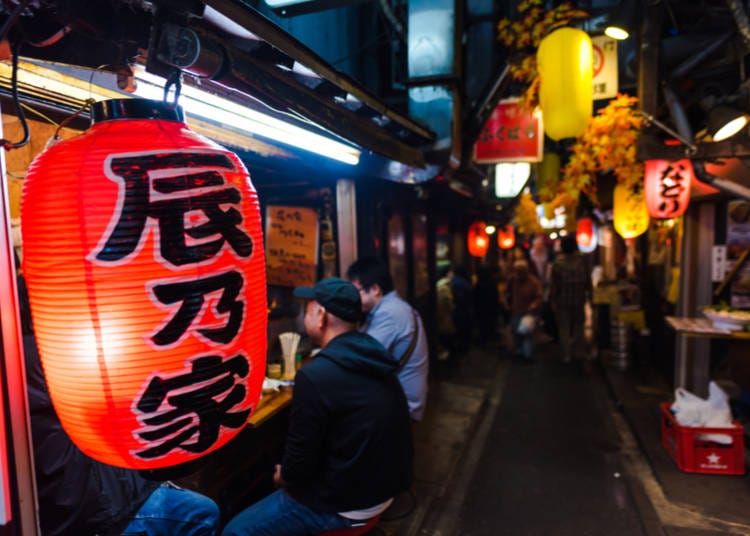 The term “yokocho” refers to the alleyways off of busy main roads where one can find food and drinks in the evening. It’s the perfect location for a pub crawl, with strings of drinking establishments packed closely together along the narrow side street. Yokocho establishments vary from tiny pocket-sized bars that seat only a handful of people to bigger izakaya serving food and drinks. Certain yokocho areas even allow you to get “delivery” from the nearby stores so you can keep your seat at one shop while enjoying a snack or two from another (The menu is usually limited to 1 or 2 of their popular items for delivery). Most yokocho bars have a seating charge known as “otoshi”, so don’t be surprised to find that the peanuts offered to you by the bartender when you sat down weren’t complimentary.