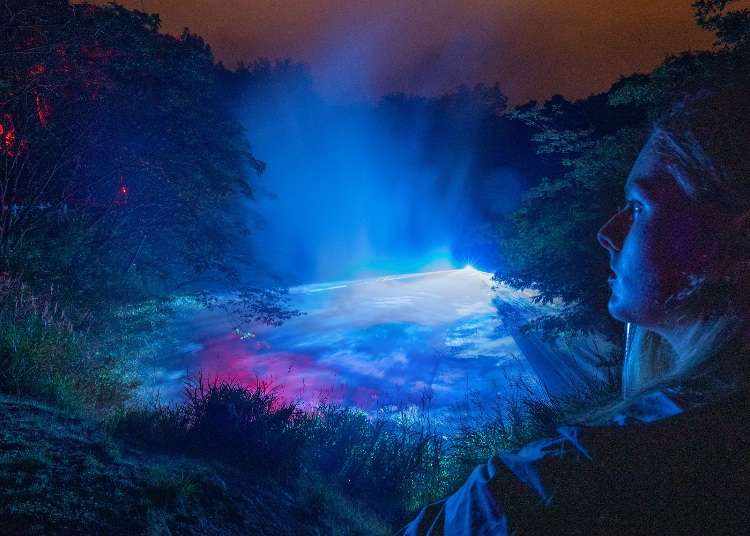 Kamuy Lumina is an adventure activity that takes you through an enchanted forest at night, created via various digital techniques including, light, video, and audio. The show takes place on the Bokke Nature Trail in the Akan-Mashu National Park, located on the shores of Lake Akan in Hokkaido. Kamuy Lumina opened in July of 2019 and will continue until the beginning of November this year. It is also tentatively planned to be held from the end of May to the beginning of November in 2020). This time we are introducing parts of the show for guests before they visit, enriching their experience, and highlighting sightseeing spots around Akan.

A First in the World for a National Park! How Did Design Factor Take the Natural Environment into Account? 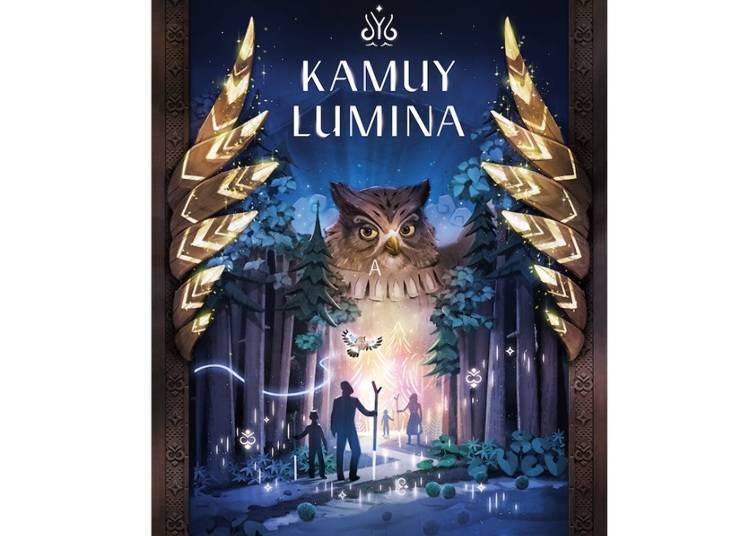 Kamuy Lumina is the latest experience in the Lumina Night Walk series, and was created by the top-level Canadian multimedia and entertainment studio, Moment Factory. The company has ten different projects around the world, and Kamuy Lamina is the first in the series to take place in a national park. Holding this event in a national park which had been designated for nature conservation, meant that there were many hurdles to be overcome. However, the program was created with consideration for the environment and features the theme of “coexistence with nature.” Kamuy Lumina was developed via cooperation with the Ministry of the Environment, the Forestry Agency, and the Maeda Ippoen Foundation, which owns and manages the forests around Lake Akan. 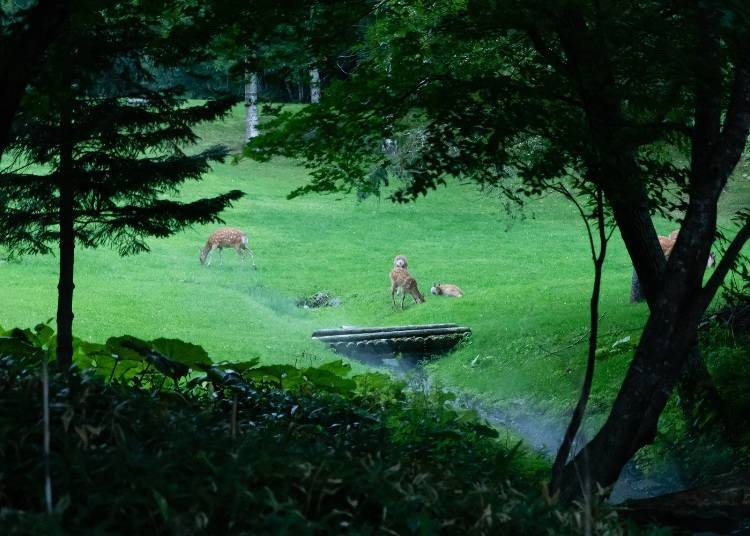 As for the Bokke Nature Trail where the experience takes place, guests can visit sight-seeing spots where they can view natural phenomenon nearby, such as mud volcanoes, volcanoes formed by a volcanic activity where gasses and water vapor are released deep from within the Earth, and untouched old-growth forest. Due to the park’s high number of visitors during the day, all equipment used in Kamuy Lumina is taken down after the final show every day in order to not ruin the natural scenery. For equipment that cannot be moved, they are camouflaged with nearby fallen leaves and branches.

The Ainu are the indigenous people of Hokkaido who have an ancient oral tradition known as “Yukar” (Ainu Oral Saga). The story of Kamuy Lumina is a yukar from the Akan Ainu people. It tells the story of a god in the form of a jay bird who saves everyone from a great famine. The Ainu people themselves were involved in the creation of the modern arrangement of this story.
Part of the profit is utilized for natural environment protection activities, promotion of Ainu culture, maintenance of the forest and lake, and development for Ainu culture.

The Time Is Now! Venture into the World of the Kamuy Together with the Owl and the Jay Bird. 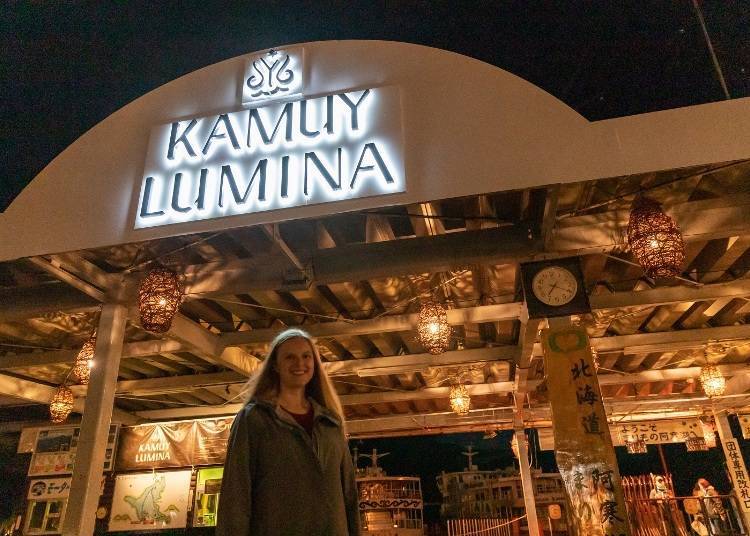 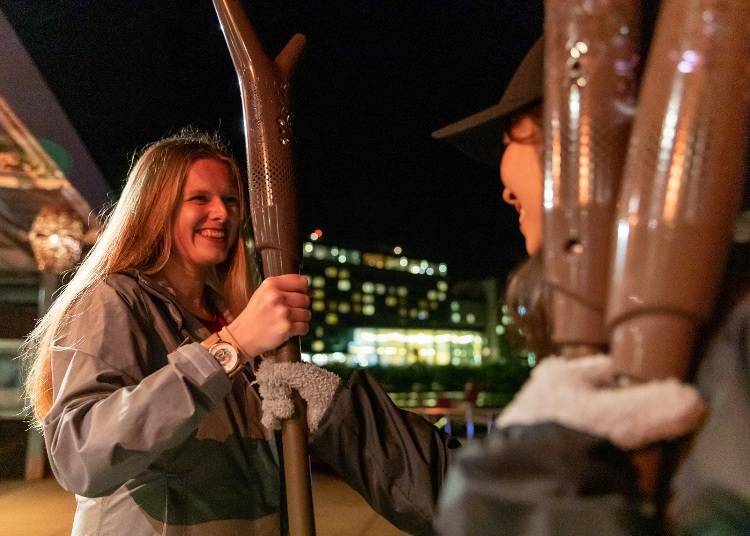 Receive your “Rhythm staff” at the entrance. The staff is modeled after the Ainu staff. When in designated areas, narration and music will flow from the rhythm staff. It also shines various colors representing each part of the story. In order to conserve nature as much as possible on the Bokke Nature Trail, there is almost no lighting installed. In their stead, the rhythm stick lights up while walking through the pitch-black forest.

The Protector & The Messenger 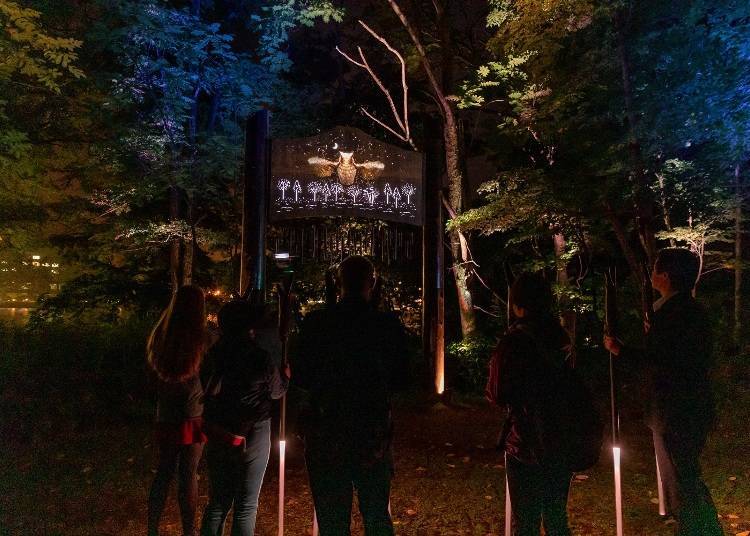 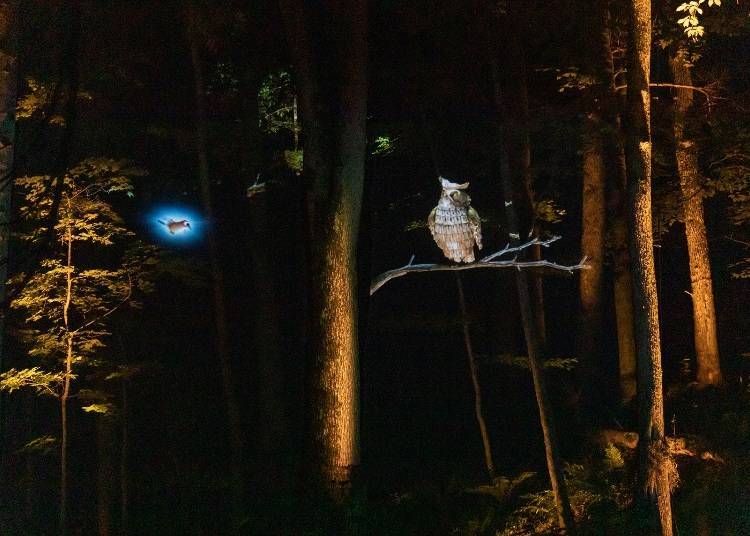 Video is projected onto mesh screens which makes The Owl and The Jay Bird appear as if they exist.

The following is a simple explanation of Kamuy Lumina:
The Ainu people have coexisted with nature and animals and revere them as Kamuy (gods). However, humans have neglected their manners and etiquette for the Kamuy, and they have stopped revering animals. The Kamuy are angered by this and have stopped sending food in the form of fish and deer to the human world. The Owl, the protector of the Ainu, is worried about people suffering from famine, and decides that he wants to give the Ainu one more chance. That is where the being with the most beautiful singing voice in all of the forest, the Jay Bird, is chosen to be the Kamuy’s representative in the human realm. The Owl requests the humans to support the Jay Bird with the rhythm stick. As for what happens when you keep rhythm with the rhythm stick, you’ll have to go and try it out for yourself!

Escape of the Deer & Message of the Marimo 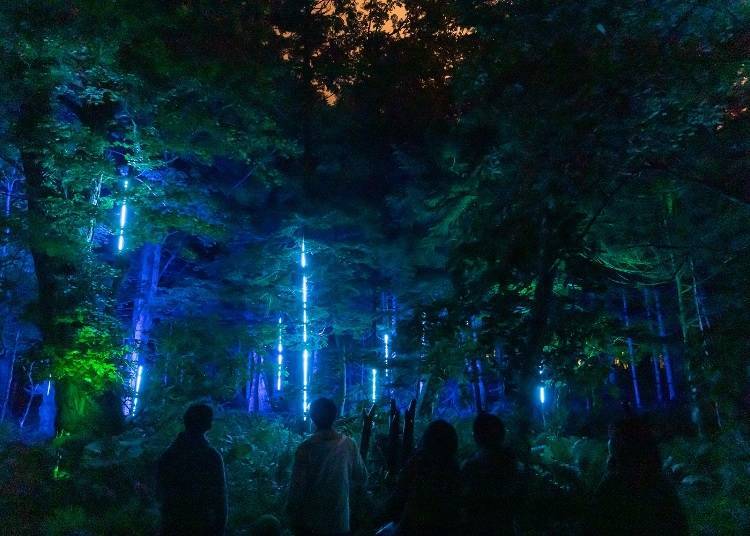 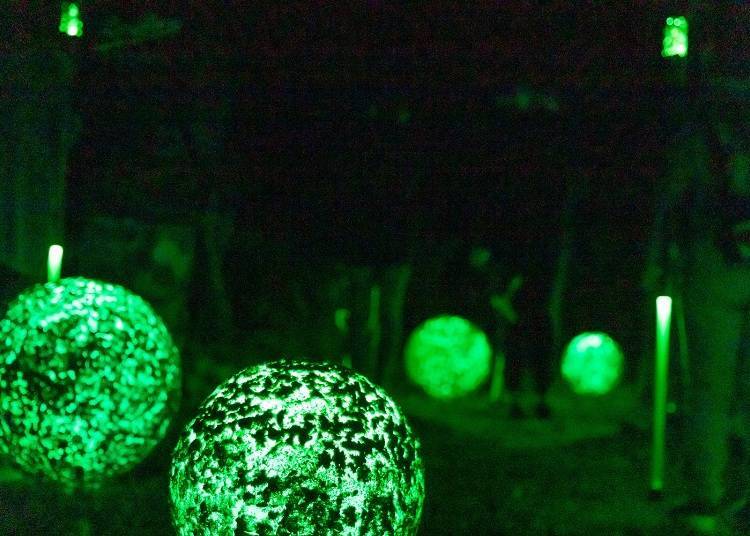 Deer and fish are gradually starting to return home to the world of the Kamuy. Living Marimo (moss ball) appear in Lake Akan and play a rhythm to save the humans. In the stillness of the forest, the shining lights are wonderfully enchanting. 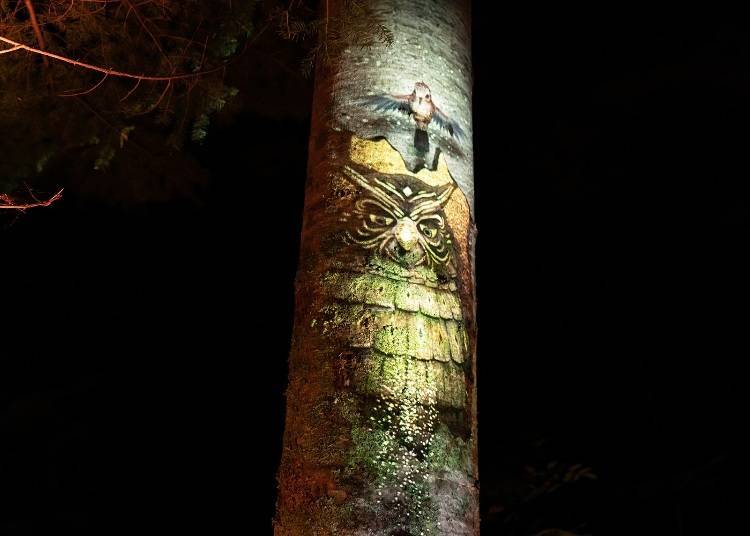 The Owl himself appears on the path connecting you from zone to zone. Be careful that you don’t miss him!

Land of the Kamuy & A Warning 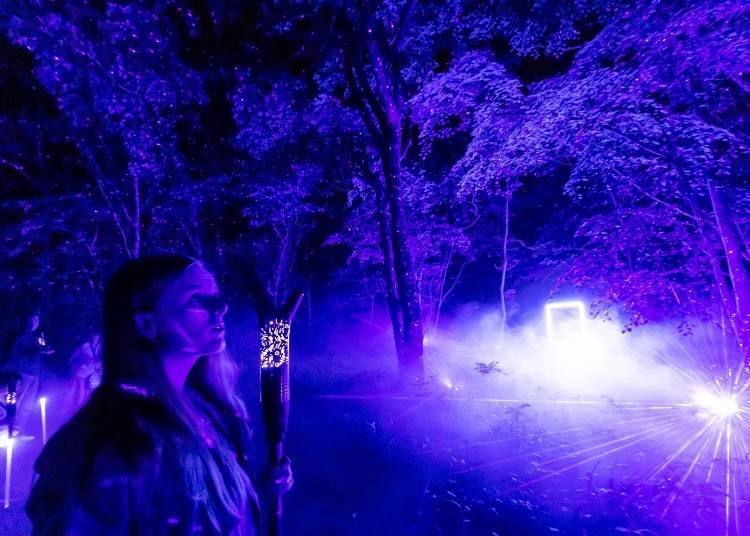 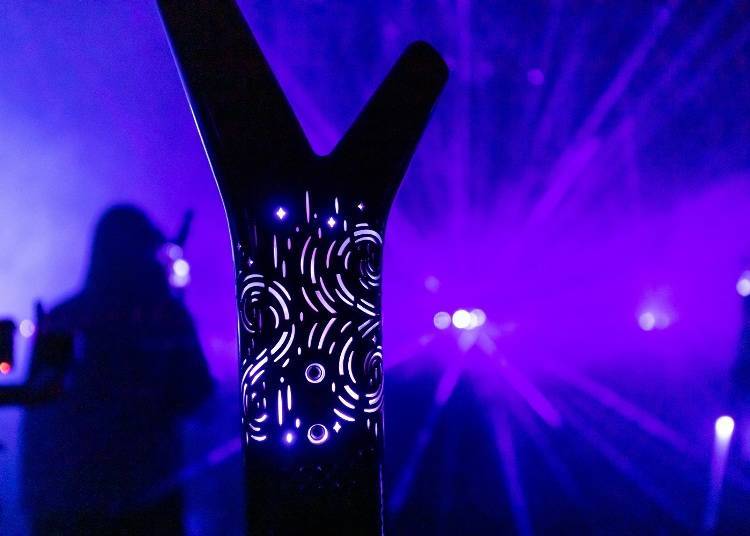 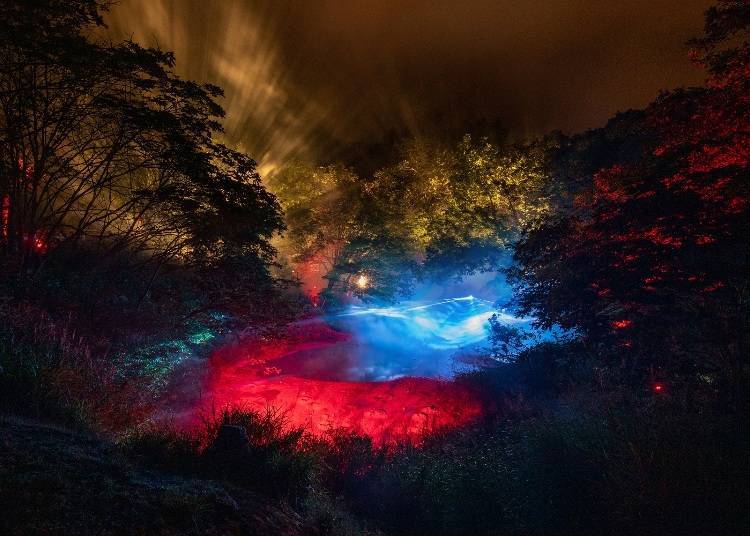 The constantly changing laser lights are stunning as they appear to quiver throughout the steam rising from the mud volcanoes! The enshrouding sulfur aroma adds to the story.

The enchanted forest twinkles with blue light as the holy gate that connects the worlds of the Kamuy and the Ainu, the “Kamimado”, appears. Just beyond the gate, the angry voices of the Kamuy echo out at humans who do not show respect for animals and have neglected their prayers. This scene packs a lot of impact!

A Collective Rhythm & The Return 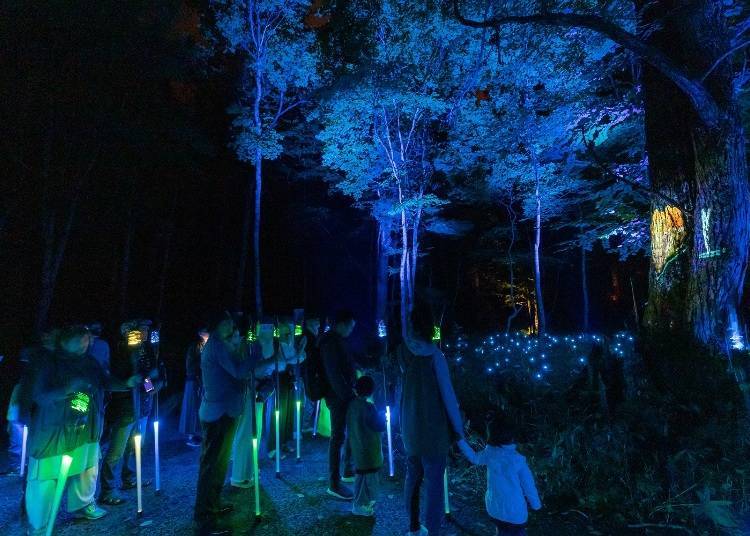 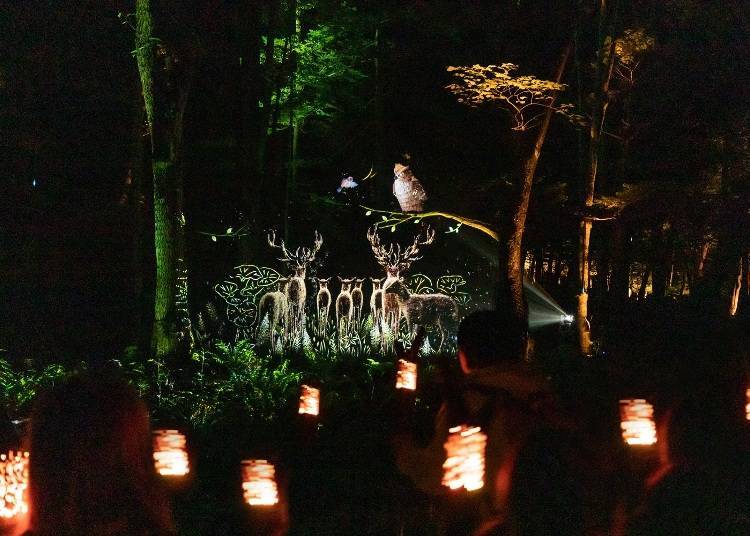 With the teachings of the Kamuy in hand, The Owl continues to appear as you move through the forest. Urge the animals to return to the human realm by keeping rhythm with the rhythm sticks. Watch the figures of animals return to the forest one after another as you follow after the audible voice of The Jay Bird. And then, the story comes to an end. 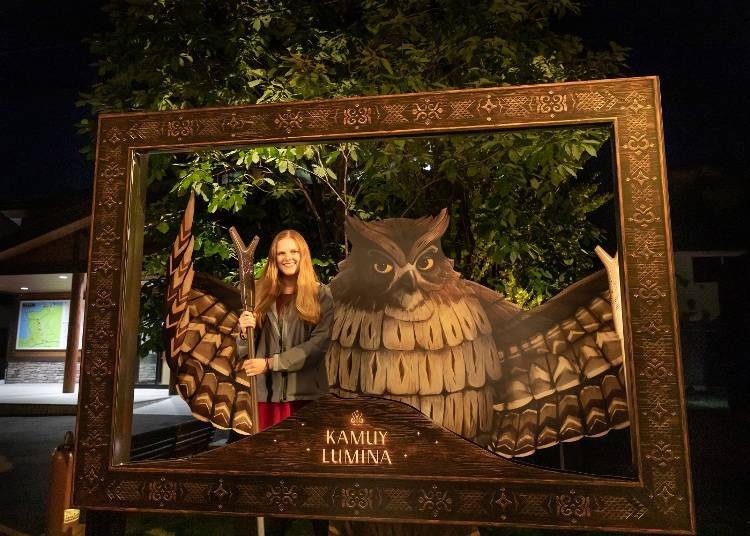 Don’t forget to take a memorial photo with The Owl at the photo booth at the end!

The show is narrated in Japanese, but the video is clear and the story is easy to understand, so guests can enjoy without being able to understand Japanese. Program books are distributed at the exit in five different languages, Japanese, English, Chinese (Traditional & Simplified), and Korean, allowing guests to look back on the story. This book was created without using staples. The reason being is that, in the event a book is dropped and forgotten, the environmental impact is minimized.

There is a hamburger shop which sells Kamuy Lumina t-shirts near the entrance. It also has limited-time special offers for guests, so please be sure to stop on by. The souvenir shop of this hot springs town also sells official goods including baseball caps and mug cups. We recommend getting one as both a souvenir and a memory of your trip.

Want to Immerse Yourself in the World of Ainu Even More? Then Check Out “Lost Kamuy” at the Lake Akan Ainu Theater Ikor! 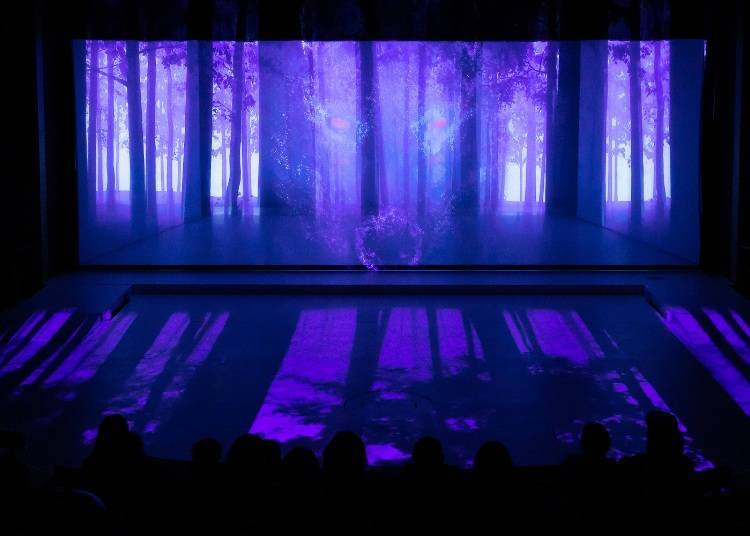 A popular tourist attraction is the “Akanko Onsen,” a stretch of onsen hot springs that lines the shore of Lake Akan. To the west, approximately 120 people live in an Ainu kotan (village) where the culture and life of the Ainu people still continue to this day. There are more than 20 antique and folk craft stores that sell woodcrafts and accessories, and restaurants. In addition, guests can watch ancient Ainu dance performances and puppet theatre shows at the nearby the Lake Akan Ainu Theater “Ikor.” 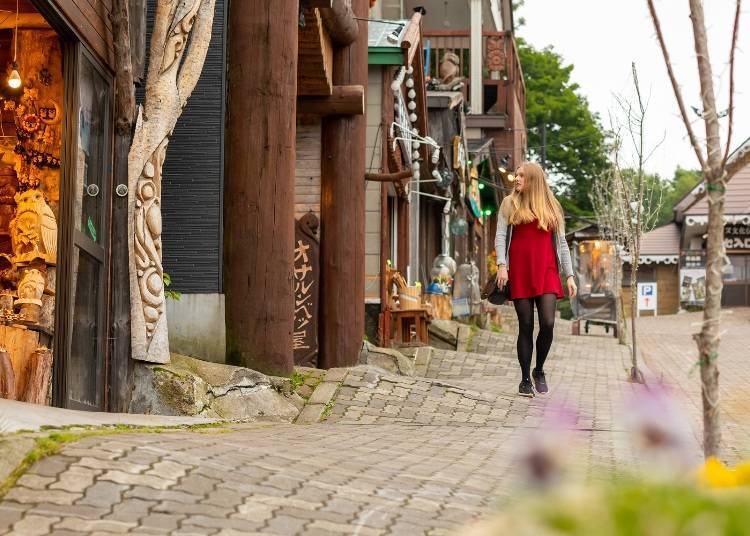 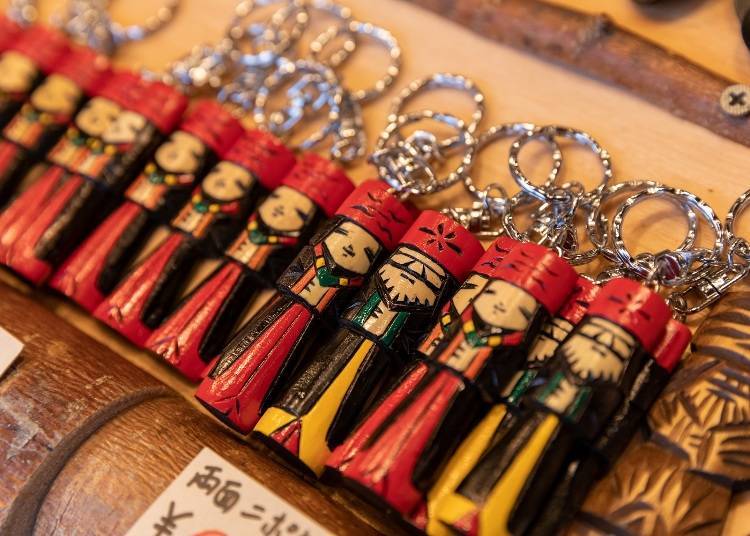 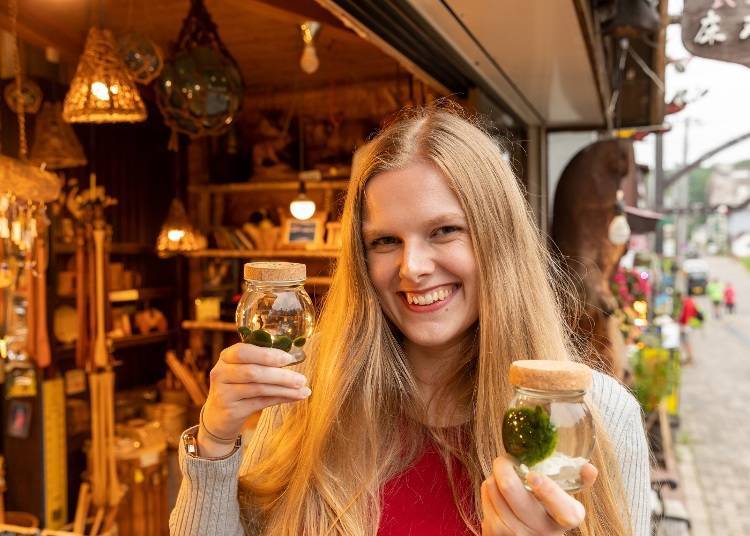 Here at Ikor, “Lost Kamuy” is where a performance that fuses together ancient Ainu ceremonial dance, contemporary dance, 3-D digital imagery, sound design, and more, and is put on by creators who are active in both Japan and abroad. 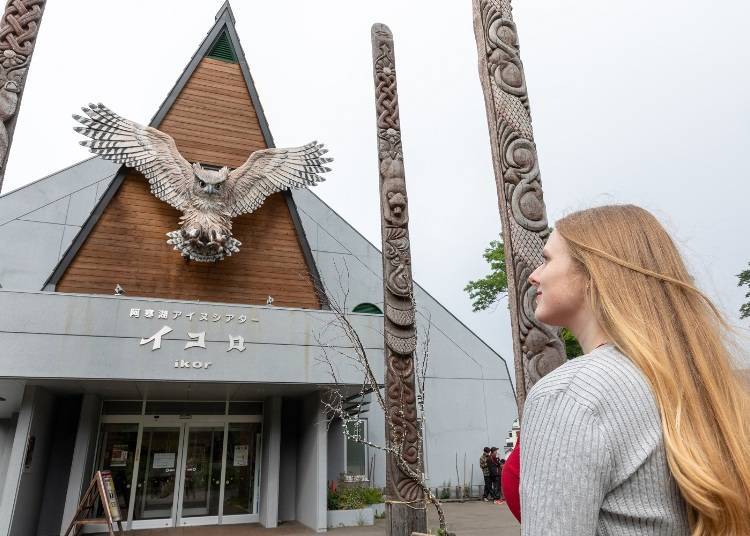 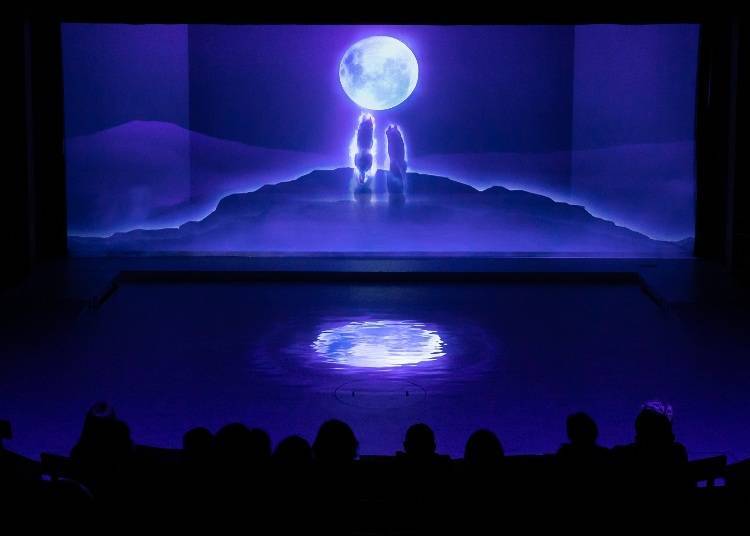 Those deeply involved in the creation of Kamuy Lumina created Lost Kamuy. 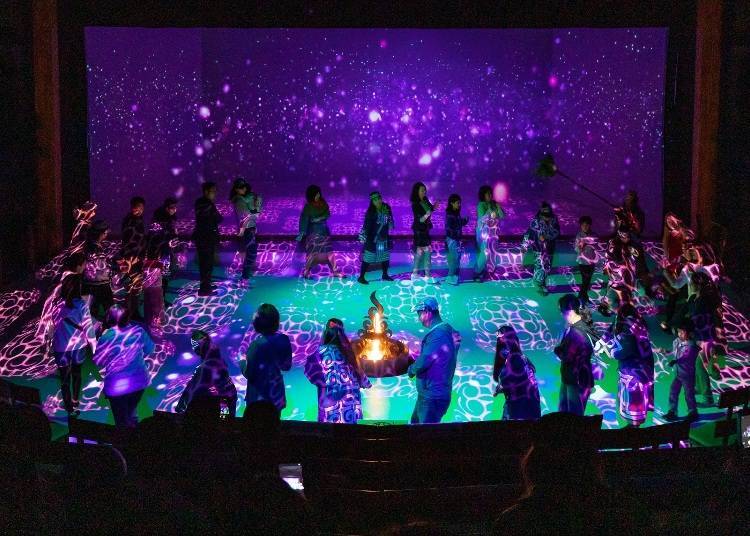 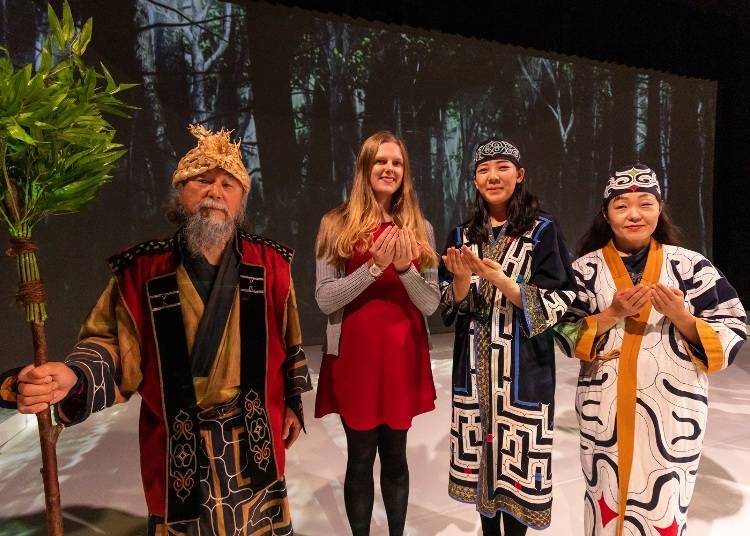 At the end of the show, guests are encouraged to get on stage, too. You can dance together with the cast and take photos with them.

There is plenty to enjoy at Akan in addition to Kamuy Lumina! The area is great for a relaxing vacation with its many hotels and hot springs. This fall take a chance on a moving digital art experience that lets you get up close with Ainu culture.

Kamuy Lumina Official Website:
http://www.kamuylumina.jp/en/
JAL Domestic Reservations Website:
*This information is from the time of this article's publication.
*Prices and options mentioned are subject to change.
*Unless stated otherwise, all prices include tax.