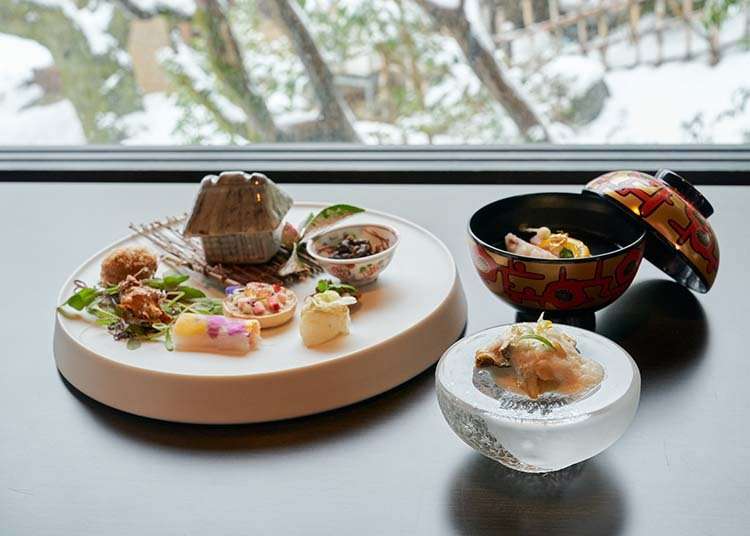 Stepping into Kenrokuen Garden in the historic town of Kanazawa, Ishikawa Prefecture, you could be forgiven for thinking you had jumped back into the feudal Japan of centuries past. Especially now, in January 2022, the timeless landscape garden blanketed in snow appears like much of Japanese tradition—frozen in time.

But this would be a mistaken impression of Japanese tradition, for Japanese culture has continually changed over time. While some aspects of it remain fixed, the culture overall has always been open to compelling new ideas.

The Japan Cultural Expo is an important representative of this historical dynamic, presenting events that respect the past but live in the present. One of their newest projects is with CLUB RED, which explores new frontiers in the art of regional dining. We visited the latest event from this project, Travelling Dining in Hokuriku, to find out more.

Tradition being as it is, passed down from generation to generation, CLUB RED is mindful of the importance of including young people in their activities. In fact, RED U-35, a part of CLUB RED, is a competition to recognize talent under the age of thirty-six.

Young chefs are rewarded with prestige and prize money, and this competition is one of the most exciting places to discover new talent. Not that these chefs need to be discovered; many of them are already lauded as chefs in their own right and have their own restaurants, some even featured in Michelin guides. These are the best of the best. 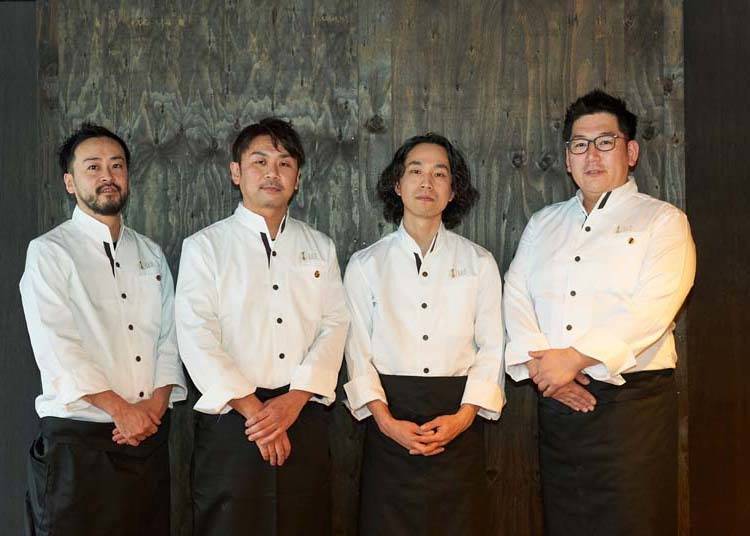 The four chefs who curated the special menu for this event (left to right: Hirata Meijyu, Hamada Yuta, Sunayama Toshiharu, and Kawashima Toru).

For Travelling Dining in Hokuriku, four of the award-winning RED U-35 chefs were invited to explore the Hokuriku region and present a menu inspired by their discoveries. The focus was not just on the produce and flavors of the area but also on the crafts, customs, and spaces that accompany the local food. The chefs put together a magnificent nine-course tasting menu that expressed their findings, not only to encourage people to visit the region but also to offer different perspectives for local chefs and inspire novel dining experiences.

Hokuriku is a region located to the northwest of Tokyo along the coast of the Sea of Japan and includes the prefectures of Ishikawa, Fukui, and Toyama. The name Hokuriku predates the prefecture system, and prior to the construction of the railways that connect Tokyo with Kyoto and Osaka, the region was the main trade route between those cities. Additionally, Hokuriku has key ports on the ancient seafaring route that connects Hokkaido at the northern end of the archipelago to the south, so Hokuriku really was the golden route that connected Japan.

As such, Hokuriku developed a rich culture fueled by exchanges with other parts of Japan. And yet, with some of the heaviest snowfall in the world, certain areas were rendered gloriously isolated and free to create their own unique culture.

The city of Kanazawa is one of the most important cultural capitals of Hokuriku, a gathering point for the many kogei, or Japanese artisanal crafts, that the region produces. As a place that unites the different cultures of Hokuriku, Kanazawa was chosen as the location for this project. 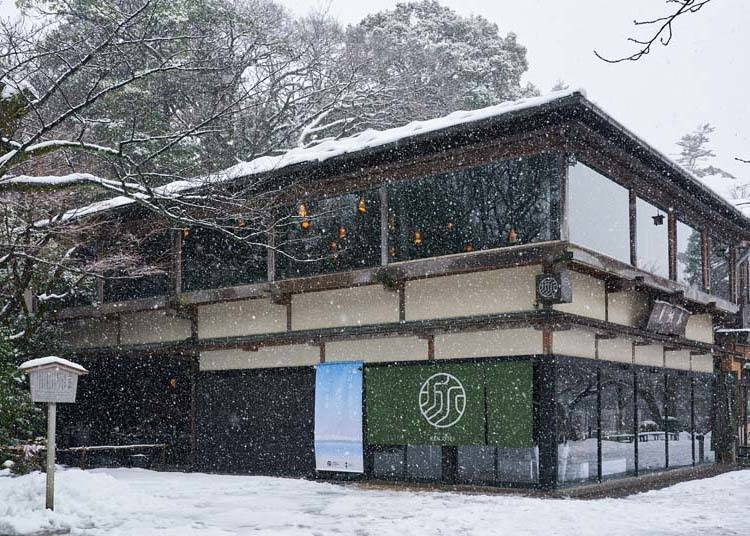 The venue for the Travelling Dining in Hokuriku event in snowy Kanazawa.

The stage was set at the Kenjotei, a tea house and restaurant next to the Kenrokuen landscape gardens and overlooked by Kanazawa Castle. 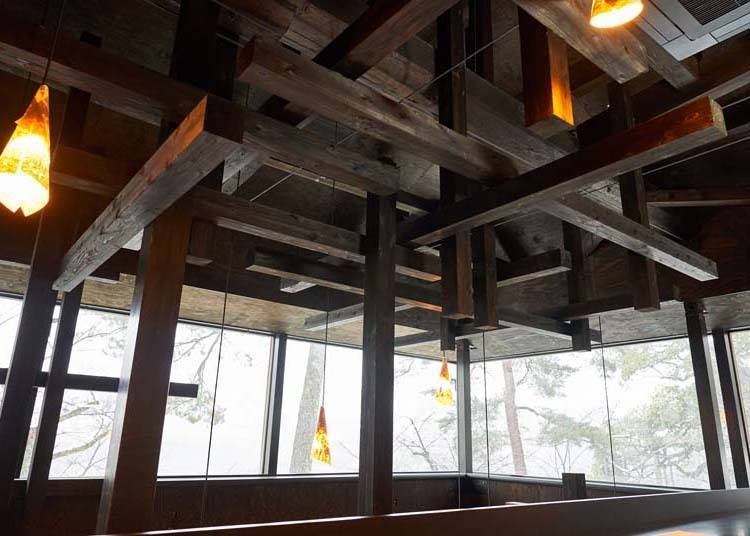 The traditional-looking building was designed by contemporary architect Kuma Kengo and includes many modern flourishes, which just goes to show that Japanese tradition lies in the hands of the current generation. 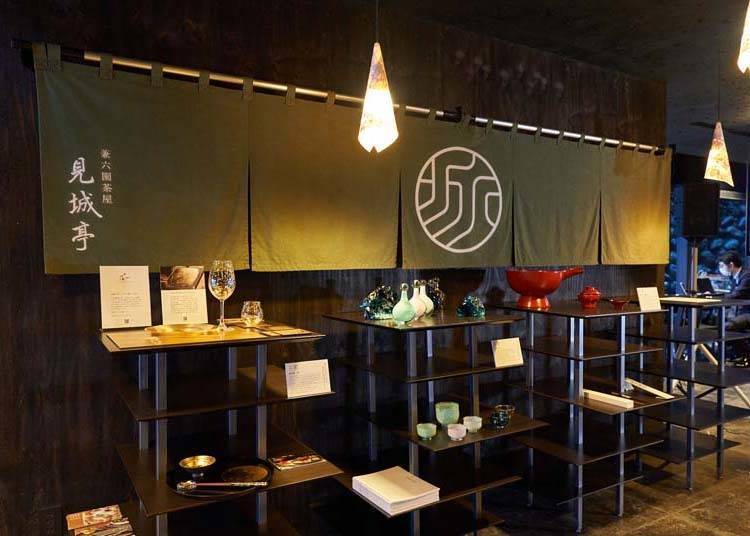 Arriving at the venue, we were greeted by a selection of kogei tableware from all around Hokuriku. 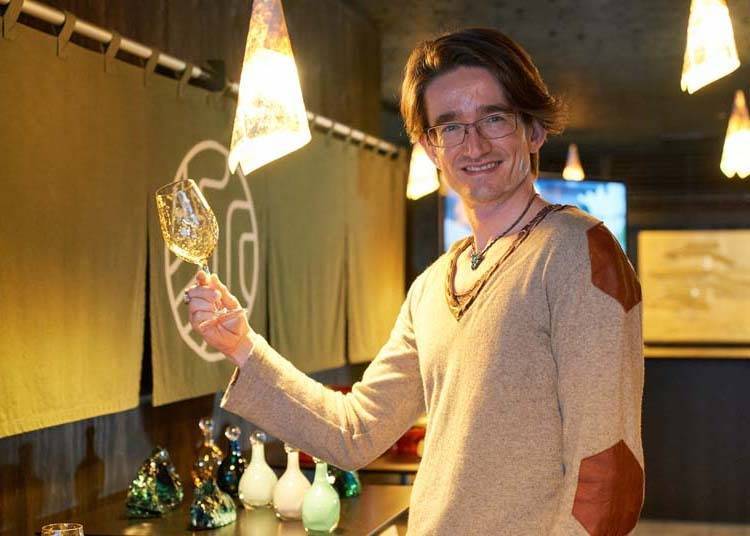 Getting in the mood for dinner with a wine glass fused with gold leaf.

Nothing says Kanazawa more than gold leaf, and if you have ever visited a Japanese temple and basked in the glorious golden light of a Kannon or a Buddha hall, it is odds-on that the gold leaf used there was made in Kanazawa. The labor-intensive method of making fine gold leaf was all but perfected in Kanazawa, and gold leaf has been the calling card of the city ever since. 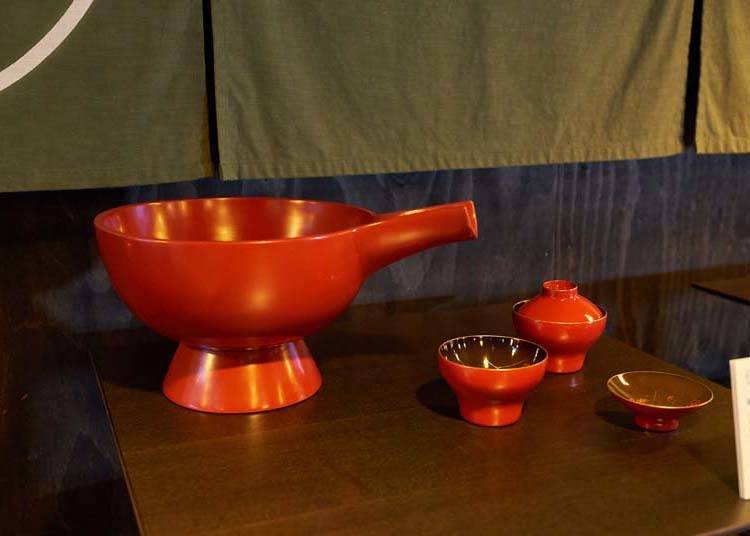 But it doesn’t stop there. The cool yet moist climate of Hokuriku is perfect for making lacquerware, which has historically been one of Japan’s key exports, even to the point where lacquerware was called “japan” in the West, similar to the way ceramics (porcelain) are called “china.” 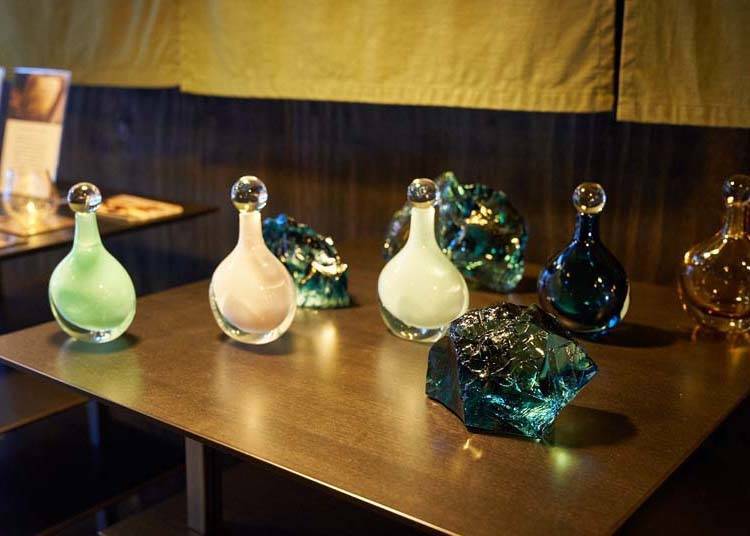 Toyama Prefecture, to the east of Kanazawa, is famous for its glassware and has been synonymous with glass in the mind of the Japanese people, but the glassware has yet to find an enthusiastic audience abroad. Looking at the glassware’s delicate shapes, which appear almost ephemeral, you may find it hard to understand why it hasn’t yet caught on globally.

But that is surely the point of this kind of event. Without going to see it for yourself, you might never have the chance to experience something as truly magical as this.

Japanese tableware tends to be viewed as art in the West, whereas it is really meant to be used in everyday life. An attending craftsperson explained, “The work is only complete when it is in use, so please use it often.” 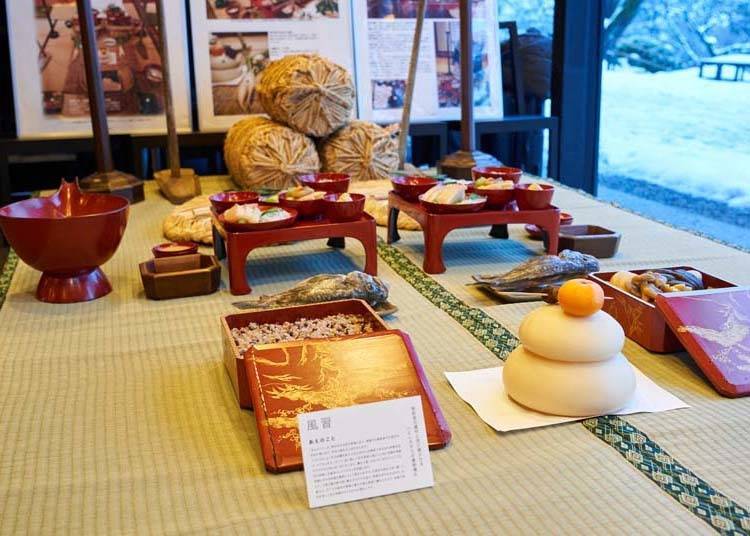 Finally, there was an exhibition of ae-no-koto, a form of harvest ceremony unique to the Noto Peninsula in the north of Ishikawa Prefecture. In this ceremony, food and hospitality are offered to the gods of crop cultivation, and it is one of the many ways that the unique culture of Hokuriku has shaped cuisine in the area—making food fit for the gods is no trifling matter. 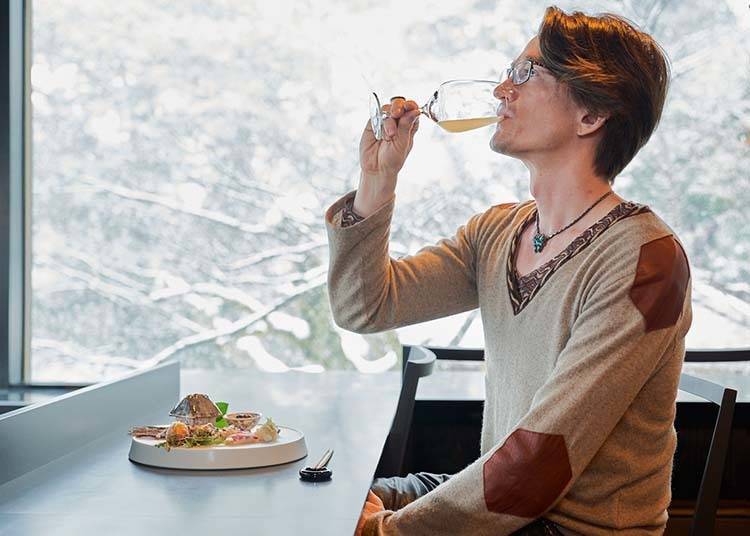 At last, the tasting menu beckoned, and we were led upstairs. After an introduction from the four chefs who had created the feast, the nine courses began to make their appearance. 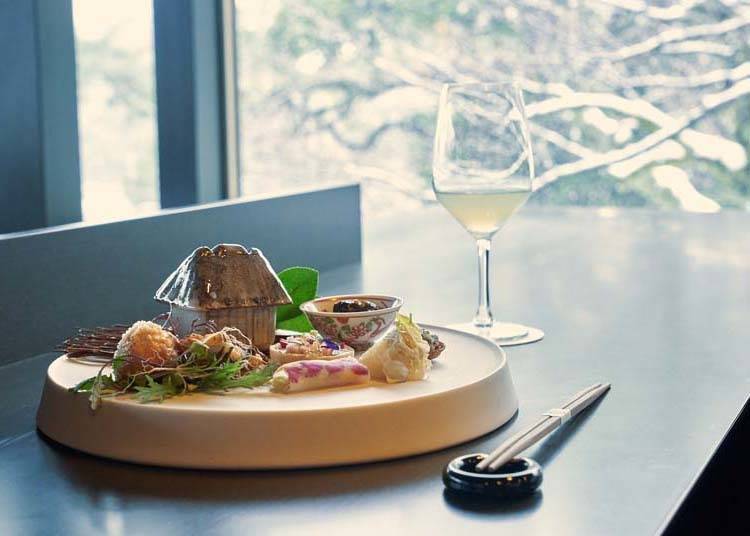 Straightaway, you could only be struck by the artistry of the presentation. Japanese cuisine is often presented so immaculately as to be de rigueur, but even for the experienced, there are times when your breath is quite rightly taken away. 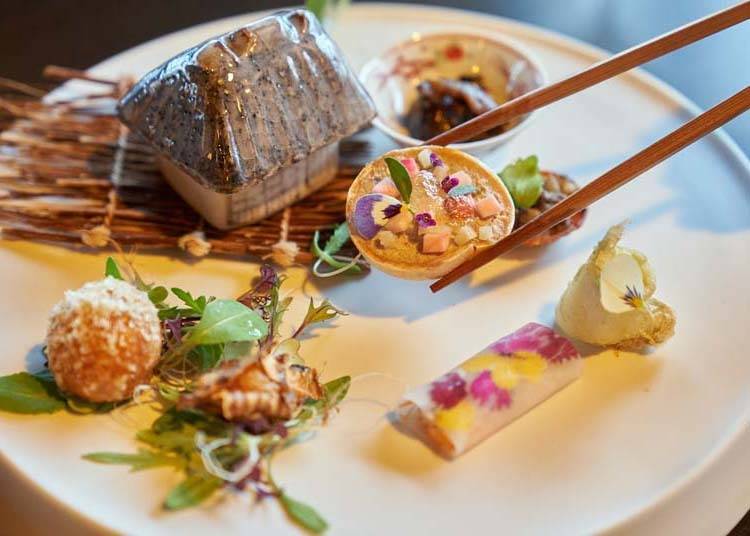 A stunning snowy landscape laid out on a platter was the first to appear. A house could be opened to yield yet more treasures inside. This single platter was a taste tour of Hokuriku itself: tartlets with tofu from Toyama, squid from the Noto Peninsula, and fugu caviar straight from the Sea of Japan.

“I wanted the theme of this menu to be tabi, the Japanese for ‘journey,’ a trip around Hokuriku without leaving your chair,” explained lead chef Kawashima Toru. 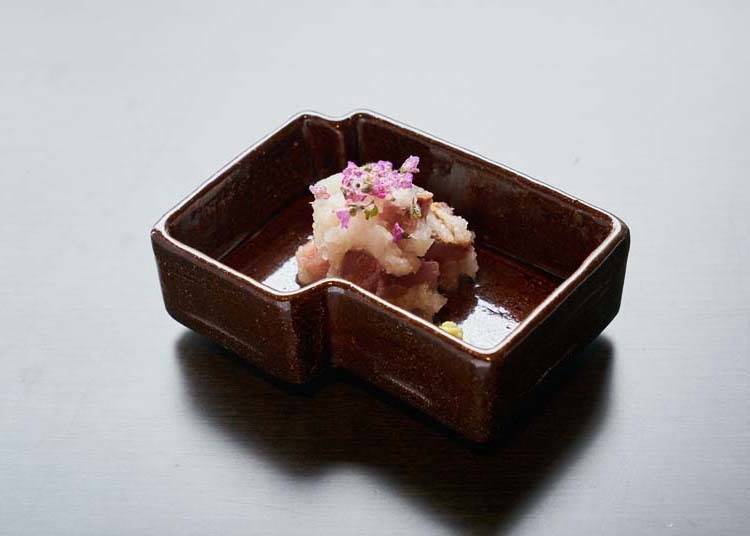 The menu followed Japanese tradition to a degree, adhering to the basic structure of kaiseki formal dining in Japan—going from starter to soup to sashimi to steamed and fried food to fish followed by meat, and finishing with rice and pickles, then tea and dessert.

“I don’t want people to think of this menu as just kaiseki formal dining; this is Hokuriku dining, an expression of the area. If people are put off by the rules of traditional dining, I want them to feel that this kind of menu invites anyone in to enjoy the artistry, flavors, and artisanal crafts that surround Japanese food,” says Hamada Yuta. 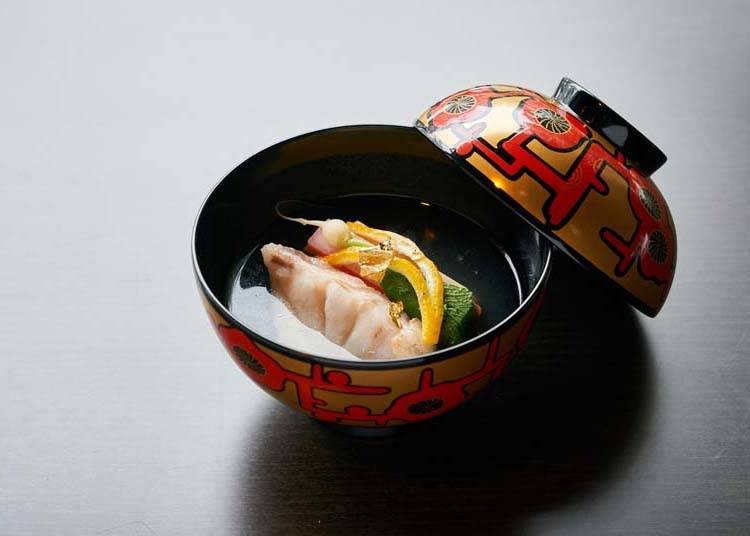 Whether it was the gold leaf glinting in the broth or the Japanese babylon shellfish in a daikon-radish foam floating on a Toyama glass vessel, the dishes revealed an attention to detail that was magnificent. As for the taste, lots of bold flavors took advantage of the rich culture of fermentation that developed in Hokuriku as a means of preserving food through the snowy winter.

“For me, the quintessential flavor of Hokuriku is found in the fermented food; that is part of the story of everyone who has lived in this area; that is what gives it its distinctive character,” says Sunayama Toshiharu. “That is hard to communicate in words, but I feel if people taste it, they will understand it instantly.” 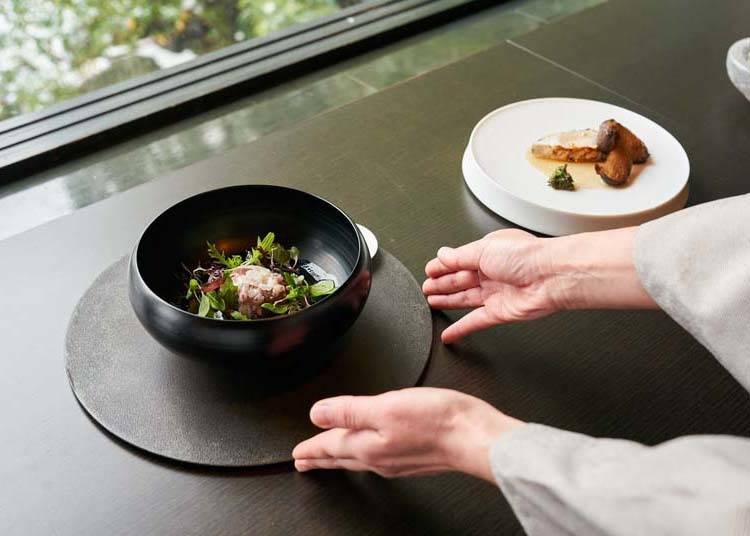 Special mention must go to the surprise addition of bear meat on the menu. There has always been a long history of eating bear meat in mountain communities, where it is ethically hunted to keep the population under control, and it is interesting to see this custom spread further afield. Served here charcoal roasted in duck fat with just a hint of mustard, it was a real delight. 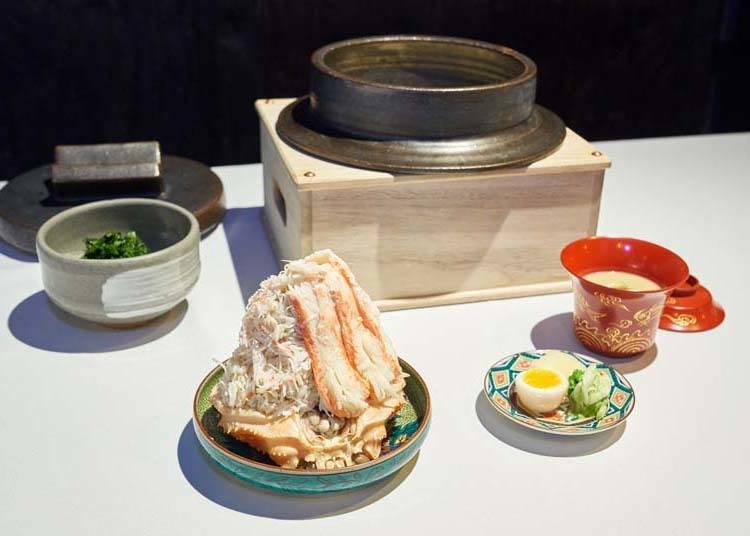 If you mention Hokuriku gastronomy to any Japanese person, only one thing will come to mind—crab. The crab season is pretty much the same as the tourist season in Hokuriku, because many Japanese people come from afar to eat it. So, of course, crab had to take pride of place on the menu as the main dish. It arrived as a mighty tower to be mixed into the rice with egg and beer-stewed radish. 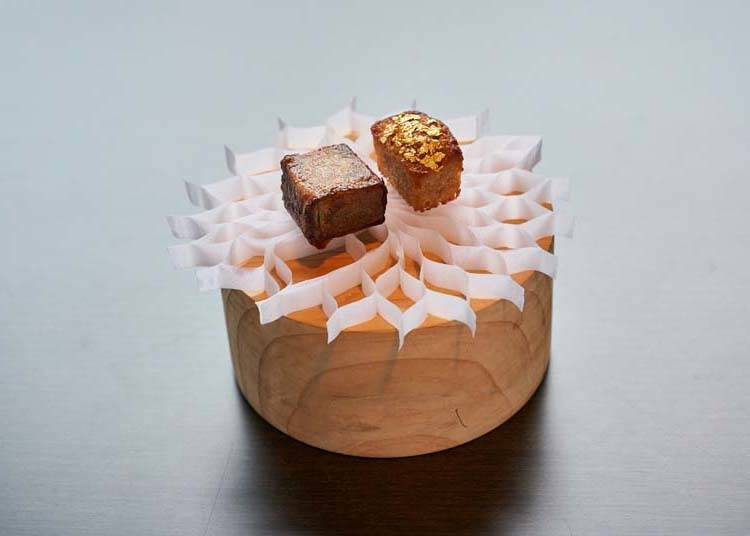 Dinner in Japan has begun to include sweets more and more. Those with a sweet tooth, rejoice!

With all the emphasis on celebrating Hokuriku at this event, it was surprising how the chefs managed to cross borders and build a fair amount of global cuisine into the menu. Sunayama Toshiharu and Hirata Meijyu have backgrounds in French and Italian cuisine, respectively, and seeing those influences interpreted through a Japanese lens was fascinating.

Unexpected hints of something as simple as basil, which is quite alien to Japanese cuisine, added another dimension to the menu and were welcome from a foreign perspective, even though they must be quite a shock to the older generation of chefs!

“With my background in Italian cuisine, I feel that I could approach the structure of Japanese cuisine from scratch. I could ignore the rules of the various courses if I wanted to!” beams Hirata Meijyu. “But this is still an authentic expression of Hokuriku, and if you were to eat this menu, you would understand the character and values of the locals.”

This is just one of a series of projects to promote the new face of Japanese culture as we move beyond the current situation and can once again welcome international visitors to Japan. In the meantime, you can stay up-to-date with both the Japan Cultural Expo and the RED U-35 competition through the links below.

This coverage was carried out with all necessary precautions in consideration of the COVID-19 situation as of January 2022.