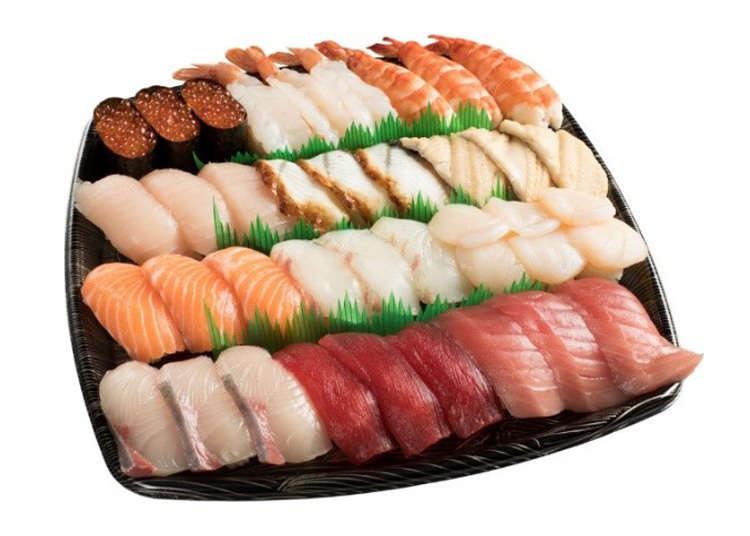 With more and more people ordering take out in Japan, and while they may not be known as take out restaurants, some popular conveyor-belt sushi chains have jumped on the bandwagon too! Here are some takeout sushi recommendations from Kappa sushi, Sushiro, Kura Sushi, and Genki Sushi.

There are plenty of budget-friendly sushi options for your next #stayhome dinner. 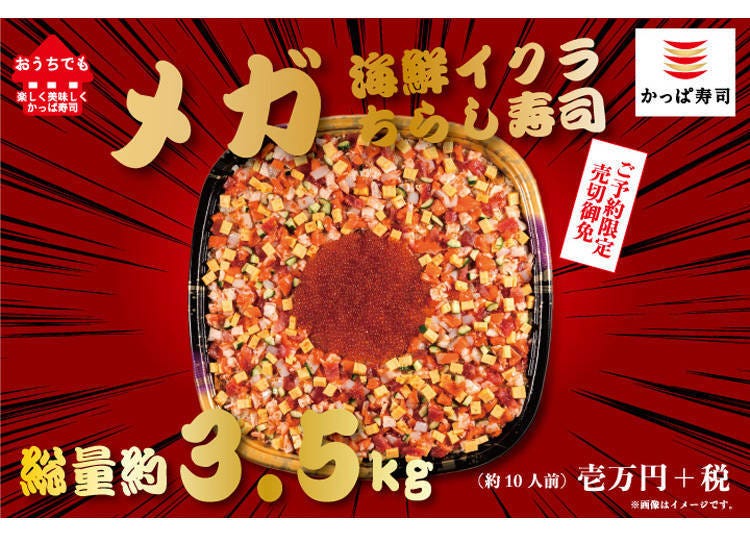 Kappa Sushi has a new insane take-out only set, namely the 3.5kg(!) "Mega Seafood Ikura Chirashi Sushi ". They also have their “Ima Dake Mori”(Now Only Set) "Kazoke Manpuku Ima Dake Set" (Now Only Full Family Set), which came onto the scene in May.

But kids might be excited to try out the “Okosama Set”, which comes with awesome Kappa Sushi original toys! All these are to be implemented at every Kappa Sushi branch. 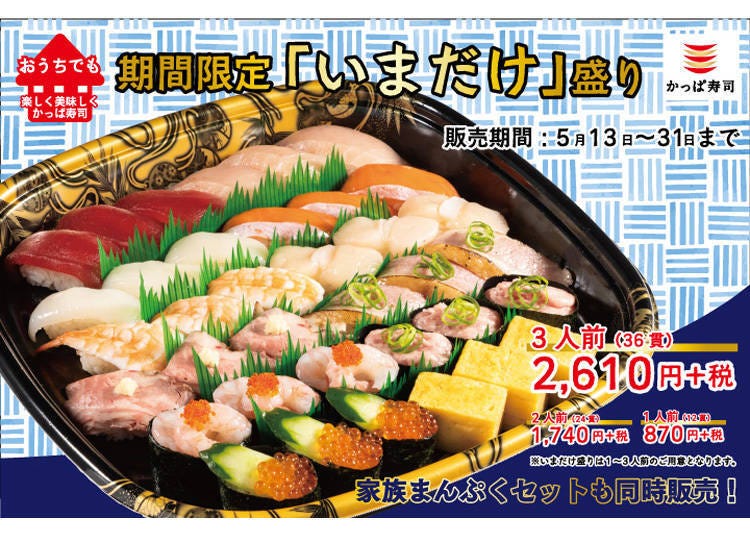 Of course, there’s also the “Okosama Set”, which has two different types: 1. Ikura and Tobiko, 2. Tuna and corn. The gachapon toys and original cards will be chosen at random, so the kids can have fun finding out their surprise present!
Price for 1 child: 490 yen (excluding tax) 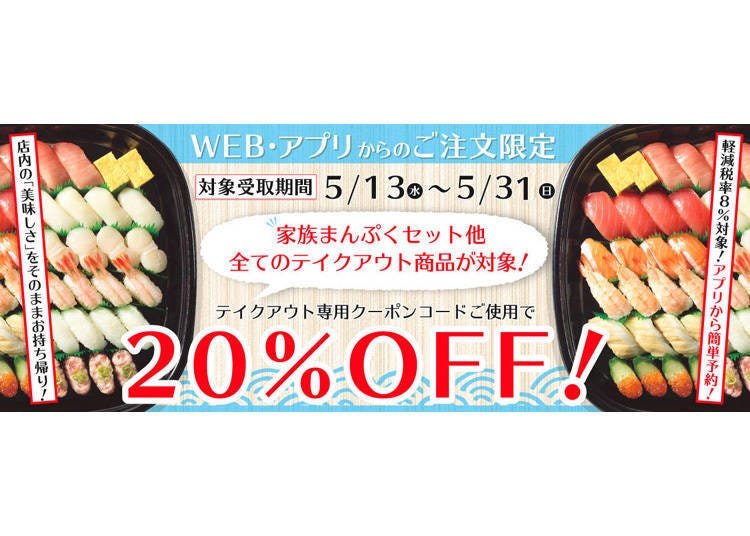 20% off coupon for takeout sushi during the above period. Can be used on the “お持ち帰りWEB予約” and “かっぱ寿司公式アプリ” sections of Kappa Sushi’s official site.

Kappa Sushi will also be offering four new takeout options from Wednesday, June 3, as below: 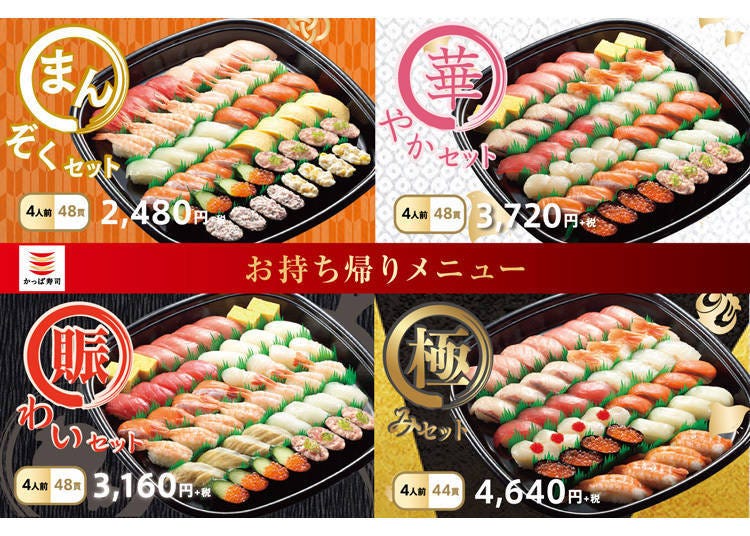 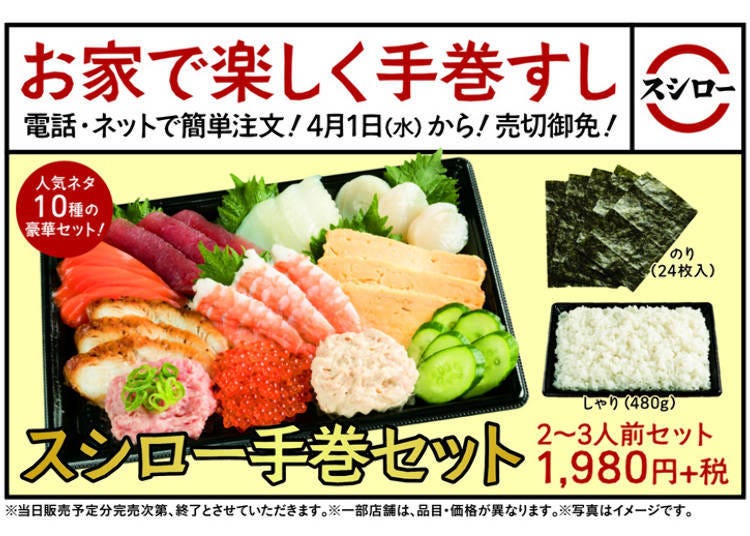 Sushiro is known far and wide, and now their takeout menus are making citizens drool in every corner of the country! Let’s check out their sets: "Sushiro Temaki Set" (2-3 servings) 1980 yen, "Sushiro Tokujo Temaki Set" (2-3 servings) 2980 yen, and "Sushiro Set 12-Shu" 1950 Yen, "Sushiro Tokujo Set 12-Shu" 3750 yen (excluding tax). You can order your sushi online via the Sushiro app or their website. 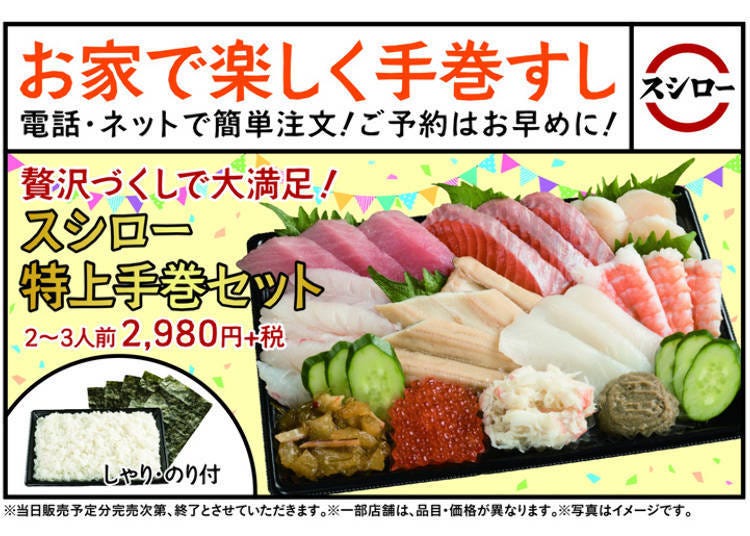 You can even get their special “Sushiro Awase Soy Sauce” to take home, as they started selling this in all stores nationwide in April!

Kura Sushi: Get a Sushi Chef Hat With the Temaki Set! 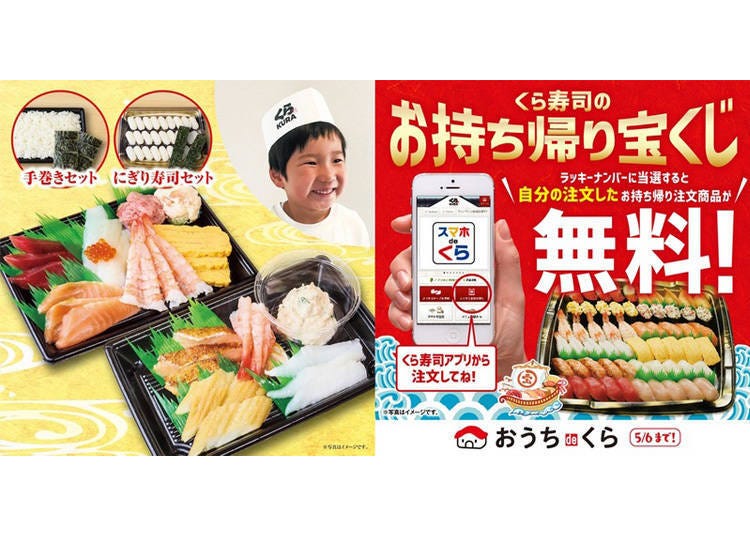 Conveyor-belt sushi chain Kura Sushi rolled out their takeaway sushi options in April, and they even started a lottery where you can win a free item via their phone app! 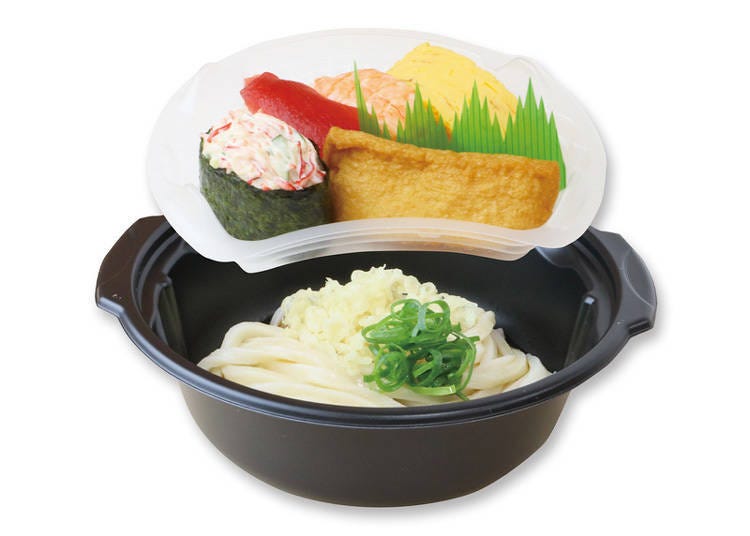 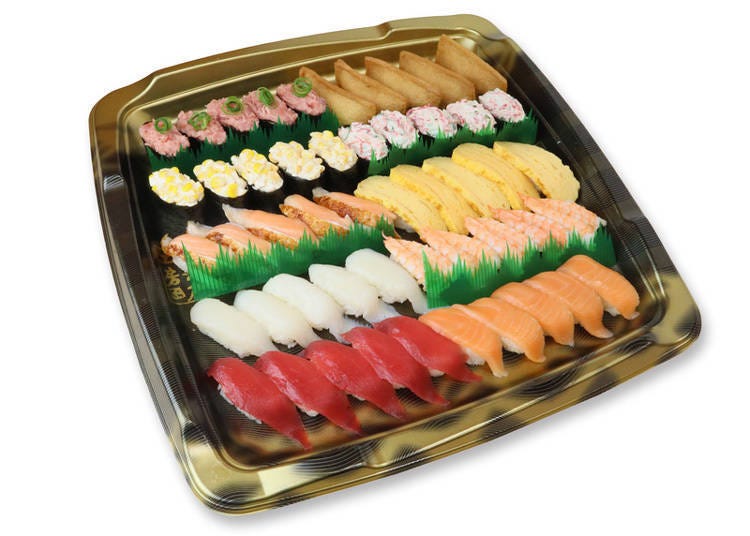 At Kura Sushi , you can even take home udon and ramen that were previously sold only inside the store! On Monday, May 25, they started takeaway noodles such as udon and ramen, which sell more than 20 million meals a year, at 29 stores nationwide. 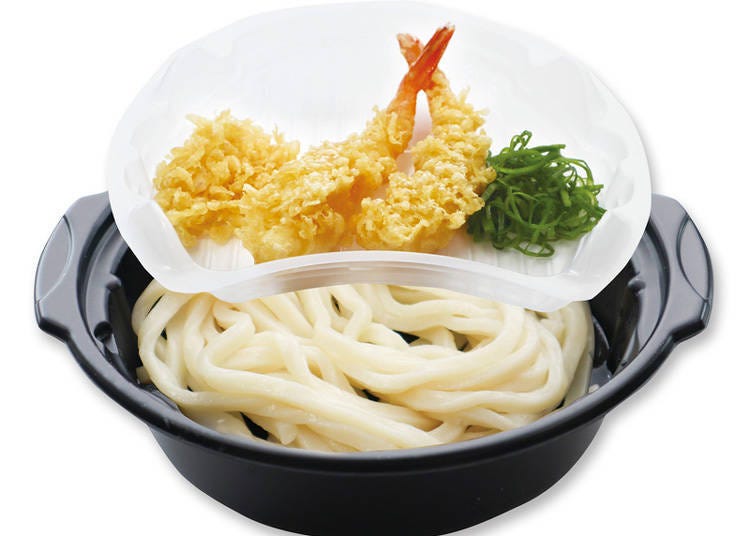 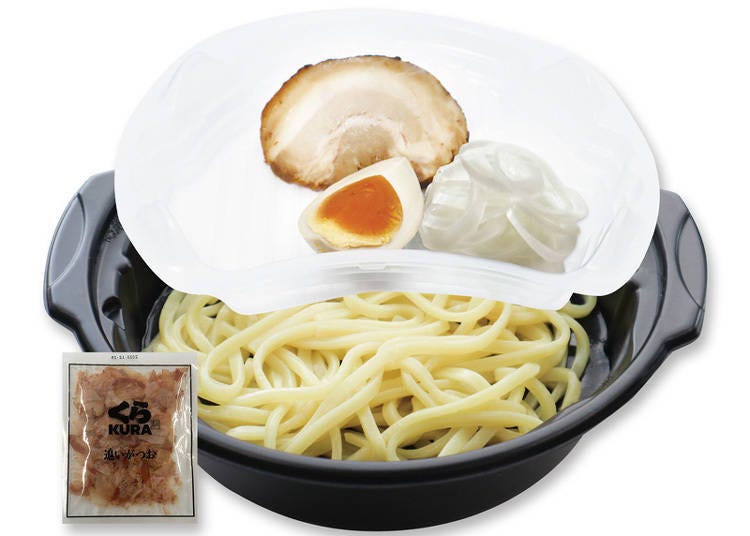 Ebi-ten Udon and Kitsune udon, shoyu, miso, and chicken noodles; take your pick! You can now enjoy the special eat-out tastes at home.

Conveyor Belt Sushi in Japan: Check Out the No. 1 Side-Dish That's Got Us Completely Hooked! 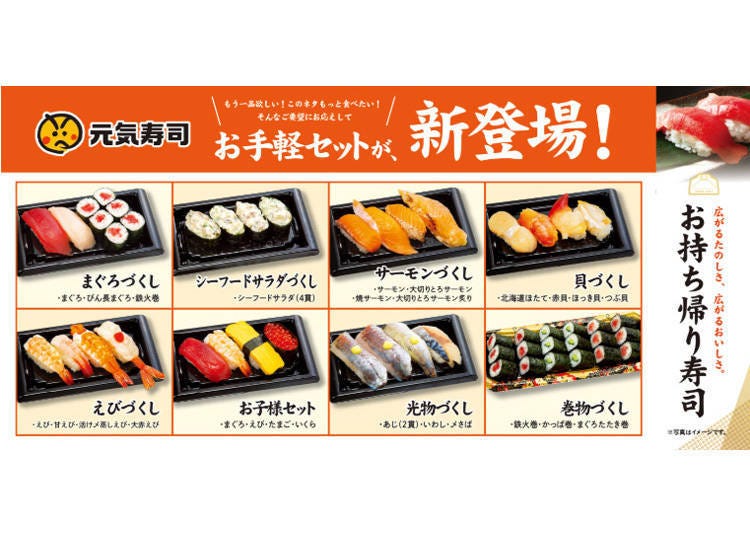 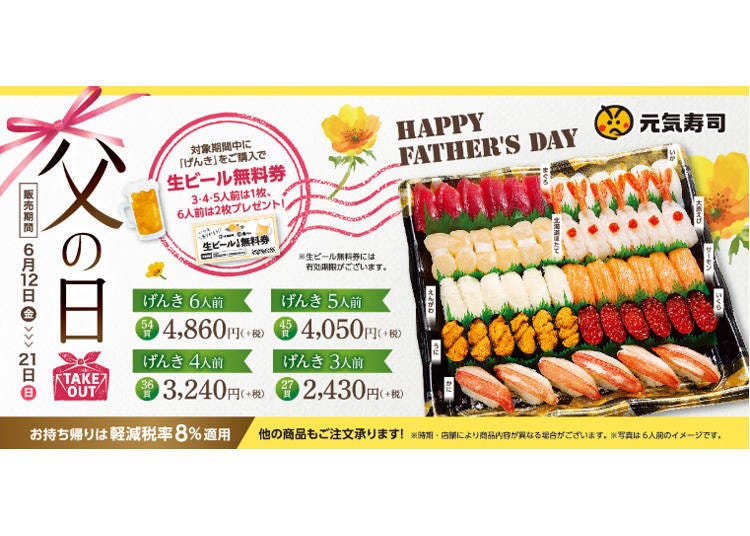 *Products not sold at some stores and prices may differ.

So what are you waiting for?! Kick up your feet and grab some takeout sushi this weekend!