HOME Does It Snow in Tokyo? Snowfall Probability based on Snowfall Amount and Number of Snow Days 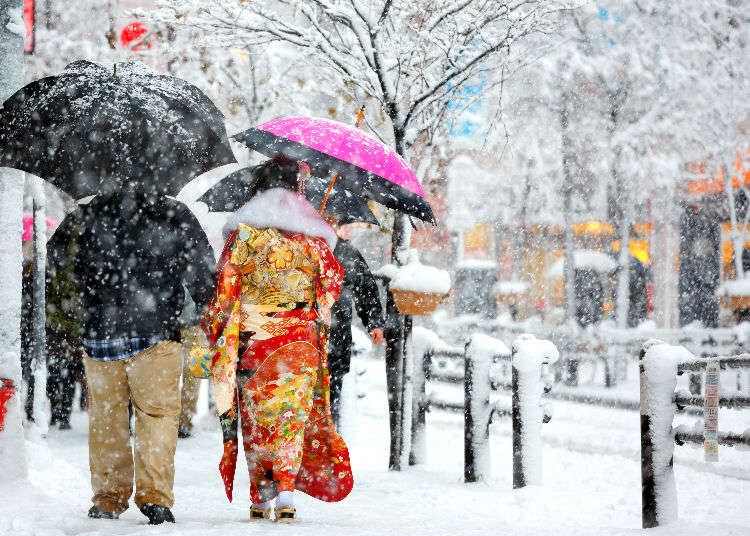 Does It Snow in Tokyo? Snowfall Probability based on Snowfall Amount and Number of Snow Days

A country known for its four seasons, in Japan one can enjoy watching the transitions between spring, summer, autumn, and winter. Beautiful cherry blossoms are in full bloom in the spring. Fresh green trees dot the city in the summer. Bright autumn leaves and flowers paint the autumn scenery. And in the winter, blankets of snow transform the city into a winter wonderland. Indeed, enjoying the changing expressions of the city that comes with each season is just one of the pleasures of a trip to Japan.

Many people who visit Tokyo during the winter are impressed by the snowscape of the city. Even amidst the bustle of Tokyo, the white snow drifting down appears to slow down the flow of time, creating a different image of the city than usual. Watching the snowfall in the unfamiliar town of an unfamiliar new country can be one of the most unforgettable memories of your life. If you happen to take the time to visit Tokyo during the snowy season, please enjoy the changing shape of the city under the snow.
So how often can you actually see snow in Tokyo? We estimate the snowfall probability in Tokyo in reference to snowfall amount and the number of snow days by the Meteorological Agency of Japan. 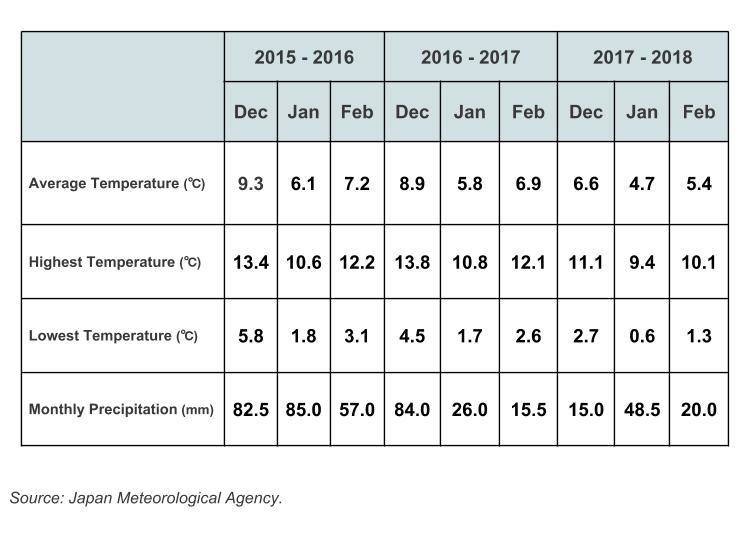 According to the chart which shows the winter climate change in Tokyo during years 2015 to 2018, there was a tendency for the average temperature to drop by 2 to 3 degrees from December to January. The cold also appears to peak during these months. Also, because the temperature in January generally hits a low of less than 2 degrees (C), make sure to properly prepare against the cold when sightseeing around Tokyo. Dress appropriately, such as with thick coats and down, and don't forget your gloves and scarves.

1. Tokyo Experiences Snowfall about 7.6 Times per Season, Concentrated in January and February

Looking at the number of snow days in Tokyo over the past 10 years, the year with the most snowfall was 2010 with 14 days, and the year with the least was 2013 with only 5 days. The average number of snow days in the past 10 years is 9.6 days. This means that the opportunity to see snow in Tokyo is limited to about 10 times a year. So when exactly is the best time with the highest possibility to see snow? 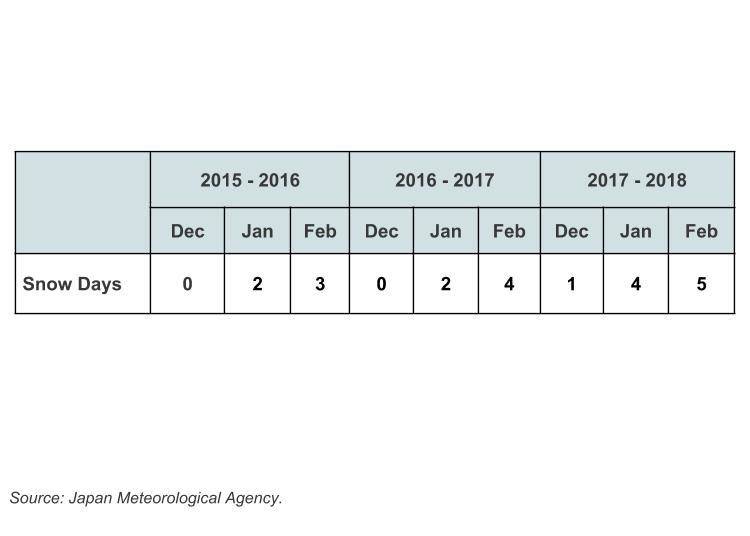 Looking at the number of snow days by month over the past 3 years, we can see that these days are most concentrated through January and February, when the temperature reaches the biggest drop during the year. If you want to enjoy seeing snowy Tokyo, the best bet would be to visit between January and February.

2) What kind of weather conditions must be met in order to see snow in Tokyo? 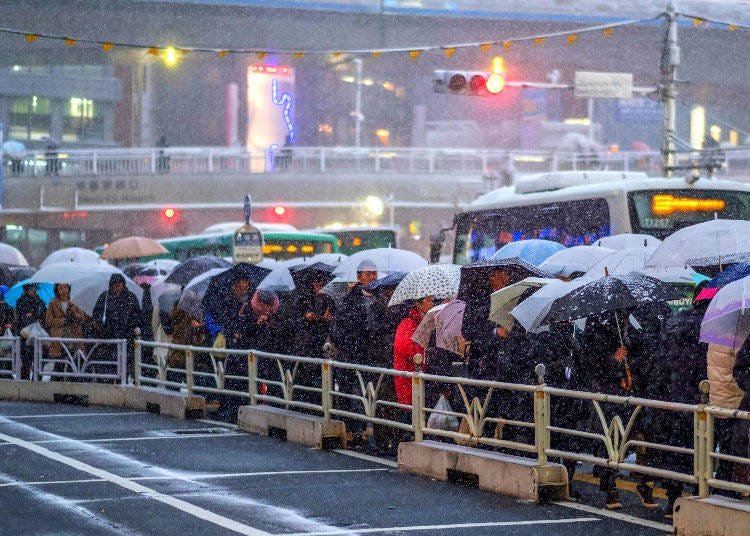 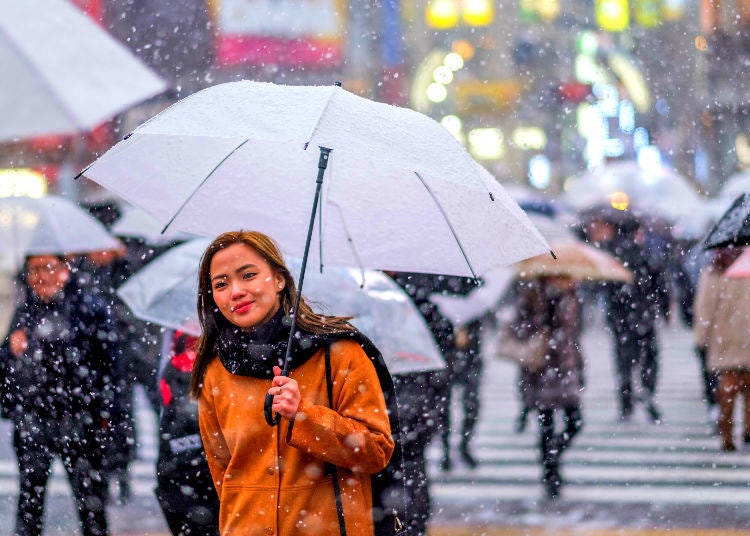 In the upper atmosphere, snow exists regardless of the season, however it only appears on the surface of the earth as snow if the temperature is low enough. If the temperature is too high, the structure of the snow will melt and fall as rain. In other words, it is necessary for the temperature to remain low in order for the snow to reach the Earth's surface as snow. One theory also states that when the temperature is roughly 2 degrees (C) or below, atmospheric pressure becomes another key factor affecting snowfall. Generally, when the 'south coast low pressure' passes south of the Hachijo-jima Islands located south of Tokyo, there is a high possibility that the moist air from the low pressure will cool in the upper-air sky and snow will fall around Tokyo. However, it is still difficult even for professional weather forecasters to accurately predict snowfall dates just by reading the air pressure. Therefore, it is probably much simpler and more appropriate to remember that "there is a possibility that snow may fall when the temperature is between 0 to 2 degrees (℃) and humidity is low."

3) Is the snowfall heavy in Tokyo? The substance and texture of Tokyo snowfall

How much snow falls in Tokyo? Looking at the max snowfall amount over the past 10 years, the most snow accumulated was in 2014, at about 27 cm high, or knee-depth. While it wasn't enough to make walking impossible, it was a dangerous amount for people traveling by bicycle or motorcycle. It also impacted various transportation facilities, causing delays and cancellations for most of the Tokyo railways, and road closings on some highways connecting Tokyo with other regions. One should bear in mind that when snowfall in Tokyo reaches an amount high enough to classify it as 'heavy' that it is likely to have the biggest impact on transportation.

■ Snowfall Days and Depth in Tokyo, Nagoya, and Osaka 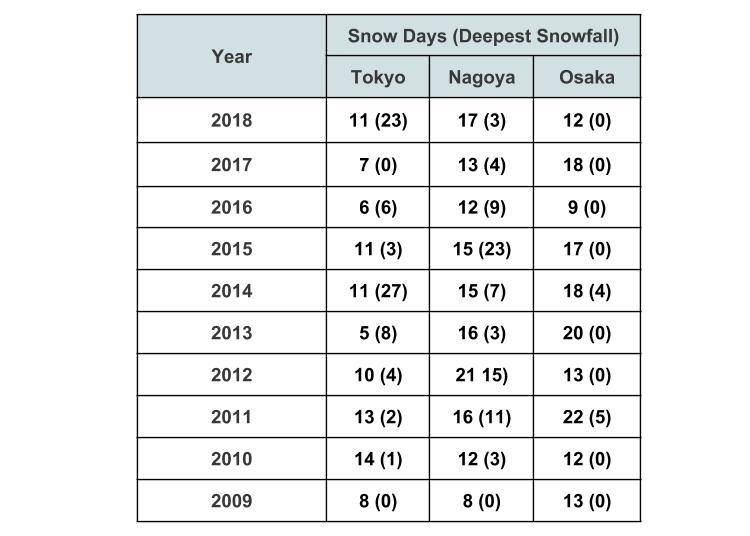 Compared with Osaka and Nagoya, the number of snow days in Tokyo is smaller throughout the year, while the amount of snow accumulation tends to be greater. However in Osaka, the number of snow days is greater than Tokyo, yet snow accumulation rarely reaches over 5 cm. Compared with other major cities of Japan, we can see that the amount of snowfall in Tokyo is relatively large

Changes in Tokyo Due to Snowfall 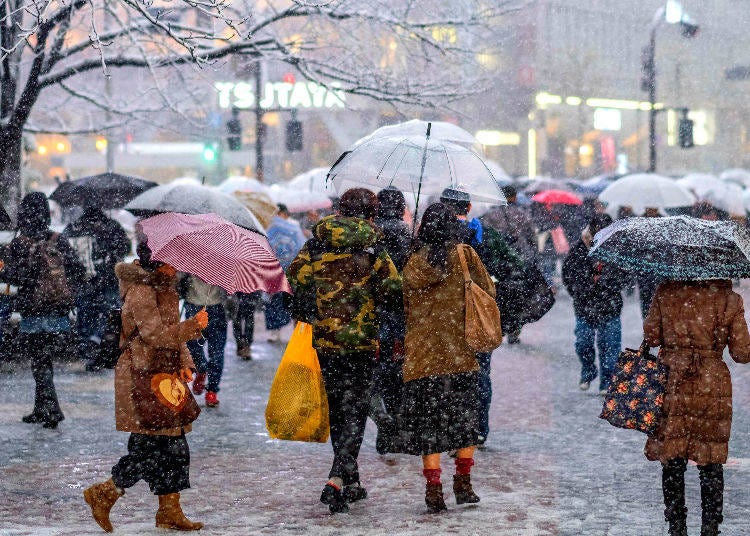 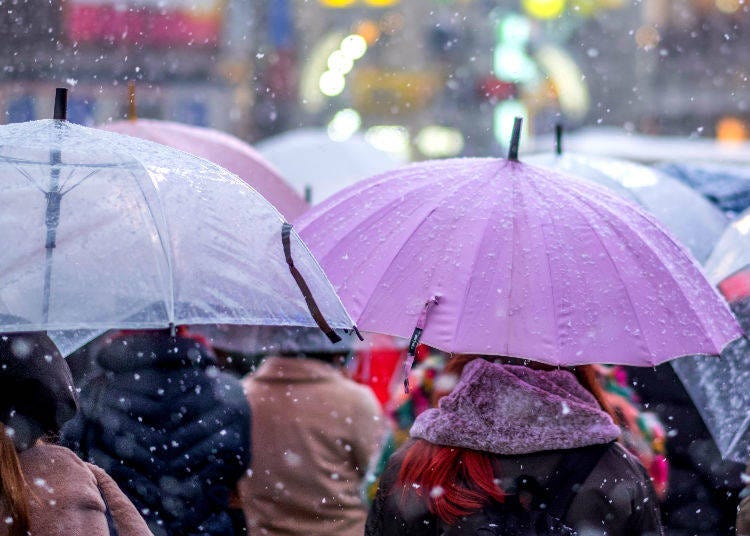 In conclusion, yes, you can definitely experience snowfall in Tokyo. Compared with other major cities of Japan such as Nagoya and Osaka, though snowfall days in Tokyo are few, when snow does fall it can be as heavy as 20cm in depth. If you want to sightsee around Tokyo's snowy landscape, the best recommended period to do so is between January and February, when the temperature reaches its lowest point in the year. If you are lucky enough to experience the snowy days of Tokyo, the winter scenery of the city is sure to become a memory you will cherish for the rest of your life.