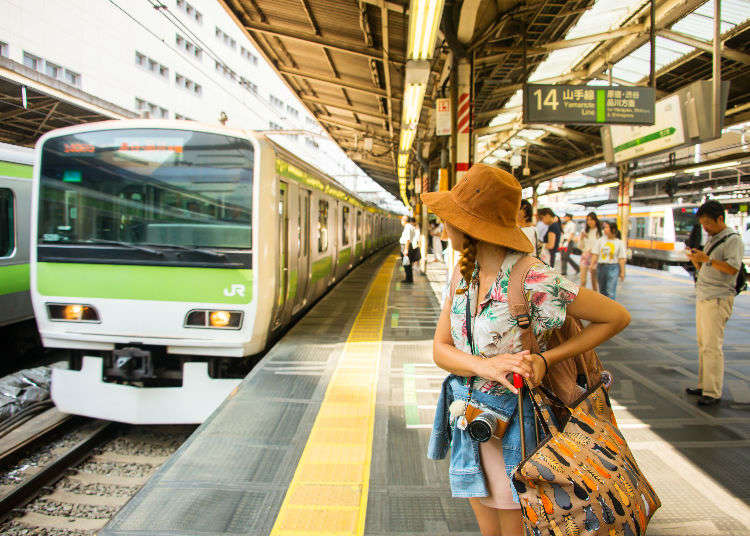 Probably one of the first things a foreign visitor notices when riding a train in Japan is how quiet it is inside the car. No matter how crowded it might be, almost no one is talking. Instead, most appear to be looking at their smartphones, listening to music, reading books, or dozing off. In large cities such as Tokyo the morning rush hour often can have a “congestion rate” of 200% of the standard set by the Ministry of Land, Infrastructure and Transport, a situation described as feeling a sense of discomfort crammed together with others, but still one just might be able to read a magazine. Inside the car there are those who do not hold on to straps and in the winter the windows become fogged up. Many people are forced to put up and suffer through this uncomfortable situation on a daily basis commuting to work and school. In order to reduce the stress caused by this, people are careful not to do anything which might disturb others, and this is an “unspoken rule” in Japan. There are times when the trains are not crowded, just as there are when they are crowded, but at anytime it is important to be aware that inside the train is a public space and efforts should be made not to inconvenience or disturb others. Here are 10 tips you should keep in mind when riding the trains in Japan to help you observe Japanese etiquette. 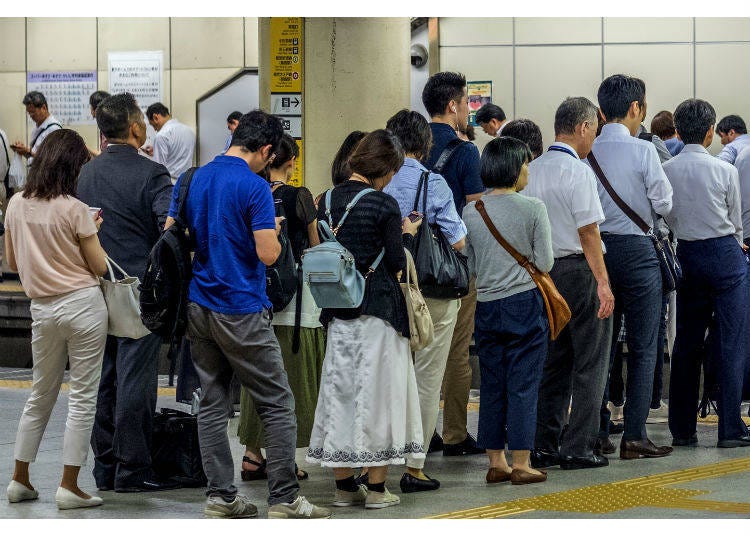 When waiting on the train platform, it is customary to wait in two lines which are indicated, one on either side of where the train door will open. There is a yellow line near the edge of the platform designating a safety area which you should stay behind. When a train arrives and stops, people getting off the train have priority, so make certain that they have done so before boarding the train. Do not cut in front of others waiting in line nor try to board before others who are waiting. Wait your turn and board in an orderly fashion.
In cities the morning rush hour peaks between 7:30 and 8:50 AM. Also, trains become crowded after 5:00 PM when business offices begin closing. There are times when not all the people waiting on the platform can board a car. So, regardless of whether you are in a hurry or not, you should not try to crowd onto a train when it is already packed, but wait until the next train arrives. In the city, trains arrive every few minutes. Running to board a train and other thoughtless acts can be dangerous and result in accidents or train delays and inconvenience other people. 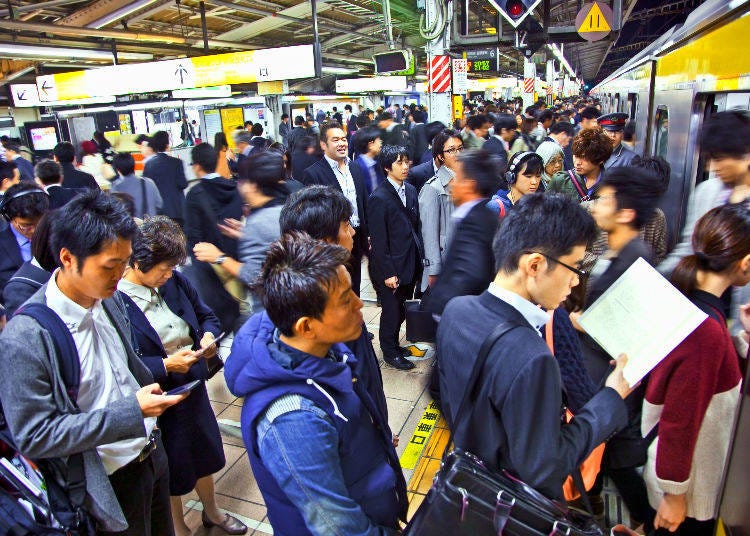 If you are standing near a train door inside a crowded train, please step off the train when the train doors open to let others get off. Once they have done so, you can get back on. There is a saying in Japan equivalent to the “haste makes waste” in English. Being hasty can lead to accidents, so rather than try to cut corners, it is better to be patient and safe. Cooperating in the boarding and disembarking from trains makes that smoother and prevents accidents and thus allows trains to run on schedule which will directly benefit you, too.

2. Not Being Noisy on the Train is an Iron Rule 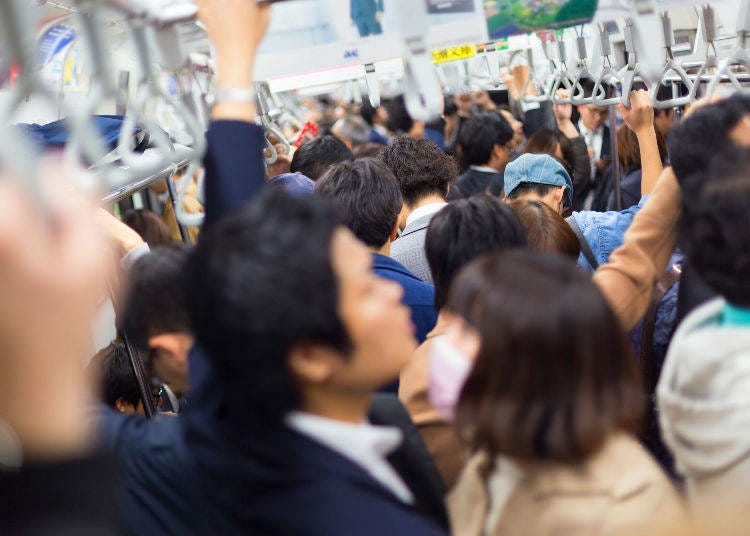 Generally it is quiet in the train cars in Japan, so loud noises are very conspicuous. Almost all people listen to music using earphones and turn the sound off on their smartphones. There is no rule against talking in the train car, but if your conversation is loud enough to be heard by those around you, it is considered rude and annoying. Japanese consider discussing private matters in public to be unseemly and rude. Always keep in mind that trains are public spaces and it is important to be conscious of not disturbing others and observing proper etiquette.

3. Set Your Smartphone to Silent Mode and Avoid Talking on it When on the Train 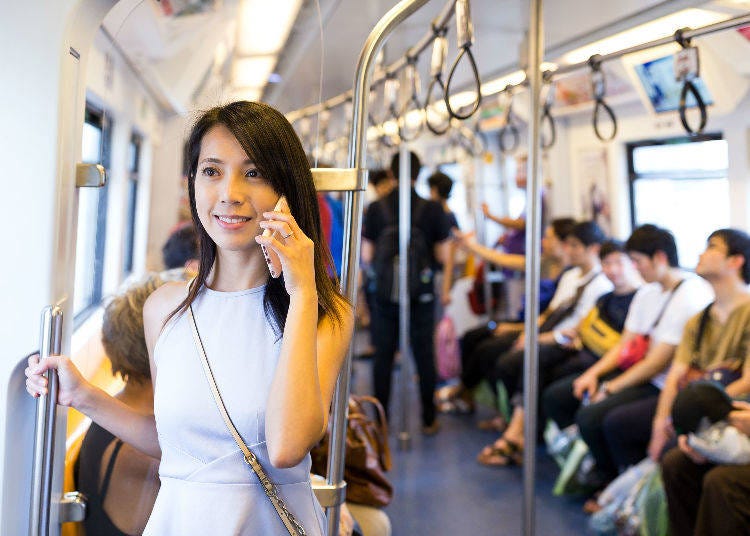 It is the custom in Japan when riding on public transportation to set your smartphone to manner mode so that it does not make any noise. If you should receive a phone call while on the train, tell the person that you will call them back. Generally when this happens the person receiving the call gets off at the next station to call the other person back before getting back on another train.
If it is an urgent matter that must be dealt with at that moment, just convey the necessary information as simply as possible and try to minimize any noise, perhaps by covering your mouth with your hand over the phone and speaking in a low voice.

4. Do Not Look at Your Smartphone When You are Walking in the Station or on the Train Platform! 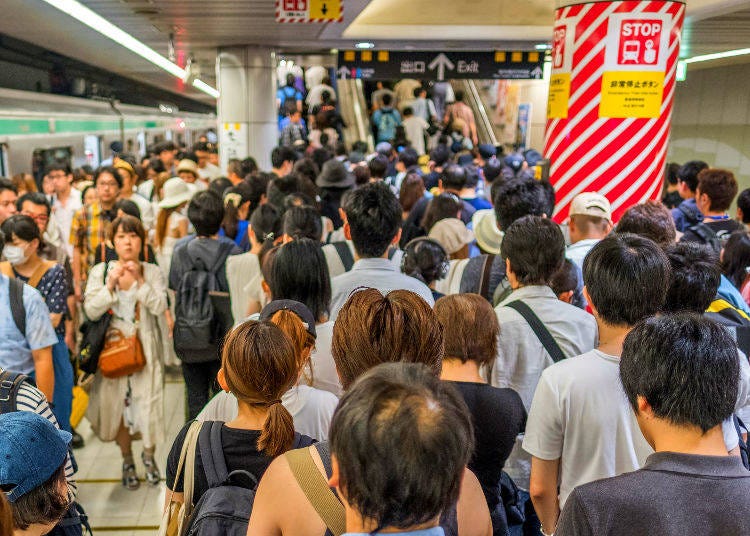 Smartphones are widely used by many people and a great many can be seen looking at them while riding the trains. Used in a wide variety of ways, such as SNS, online gaming, checking the news, reading and answering email, many have come to rely on them heavily. Becoming too engrossed in them, though, one is likely to forget that he is in a public place and not pay attention to where he is walking. Be very careful not to look at your smartphone when you are walking. Overconfidence in your ability to do so can lead to tripping on stairs or falling off of the train platform or bumping into other people. Please pay special heed to this.

5. Generally Eating or Drinking on the Trains is Taboo! 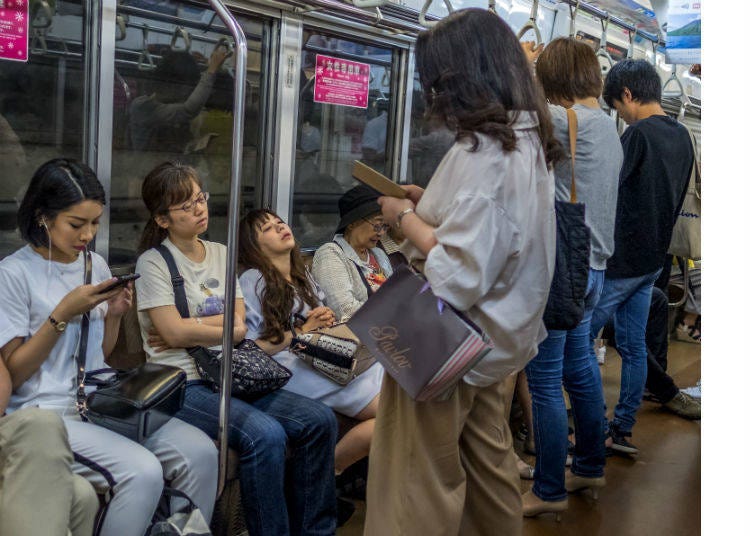 It is considered bad manners to eat or drink inside trains, the exception being on the Shinkansen or other long-distance express trains. The smell of the food offends those around you and there is always the possibility of spilling drinks or food, so please avoid bringing food and drinks into the train. Restrict items you bring into the train to bottles of water or tea.

6. Be Careful How You Sit on the Train! 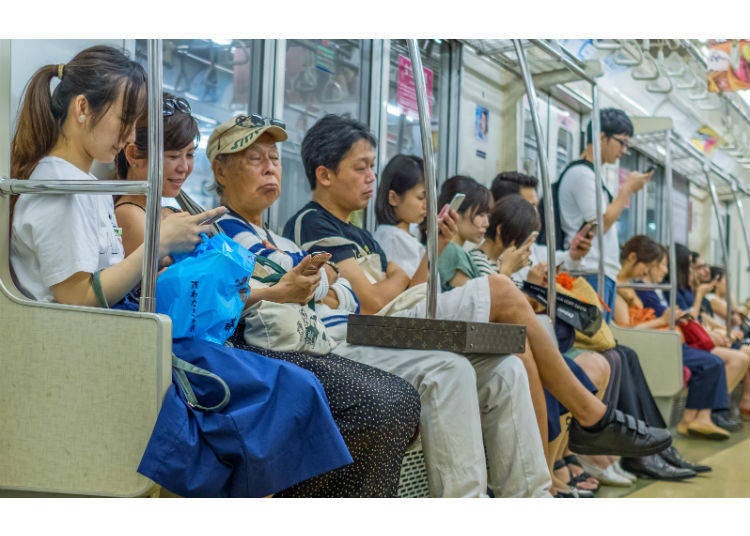 The seating on most trains is enough to seat 7 or 8 people. In order to enable as many people as possible to sit, be careful to sit in the space for one person. If you have bags or other items, hold them on your lap or place them on the overhead rack so as not to inconvenience others. Avoid placing items on empty seats or spreading your legs to place the items at your feet.

When sitting, do not spread your legs or stretch out your elbows or sit in a way that would disturb others. Also, it is considered bad manners to rifle through your bags looking at items you purchased as though you were doing so at home. Again, keep in mind that you are in a public space where attention should be paid to such etiquette.

7. Be Careful that Any Large Bags or Luggage Do Not Inconvenience Other Passengers! 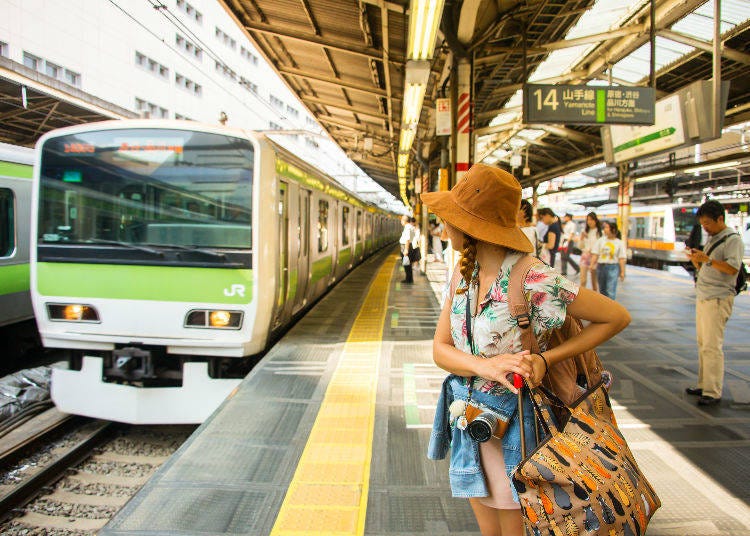 When you have a suitcase or other large item with you, hold it carefully so that the motion of the train does not cause it to move around. Also be careful to keep it in a place away from the doors so that it does not hamper passengers getting on and off the train. For strollers, you should fold them up when the train is crowded to minimize the space they take up. Even when the train is not so crowded and children can remain in strollers, be careful that you do not block the path of passengers getting on or off the train.

8. If Sitting in a Priority Seat, Relinquish it if Necessary! 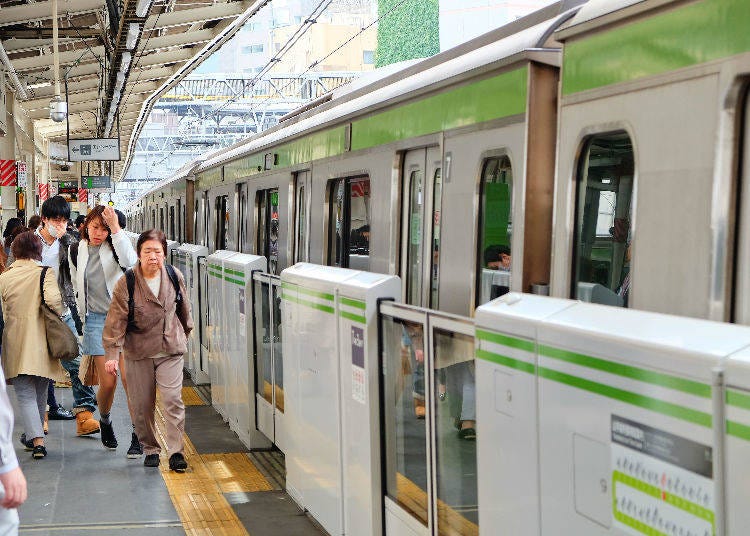 In addition to regular seats, there are priority seating areas which should be avoided when possible. These priority seats are of a different color than the normal seats and they are reserved for the elderly, those with disabilities, pregnant women, and small children. When the train is relatively empty and no one is sitting in a priority seat, you may do so, but if someone who qualifies for it should board, please give your seat to that person.

It is possible that some sitting in a priority seat may have pacemakers, so if you are standing near a priority seat, please turn the power of your smartphone off. The safest thing to do is try to find a place to sit other than a priority seat even when the train is not crowded.

9. There are Train Cars Reserved Only for Women during Rush Hours! 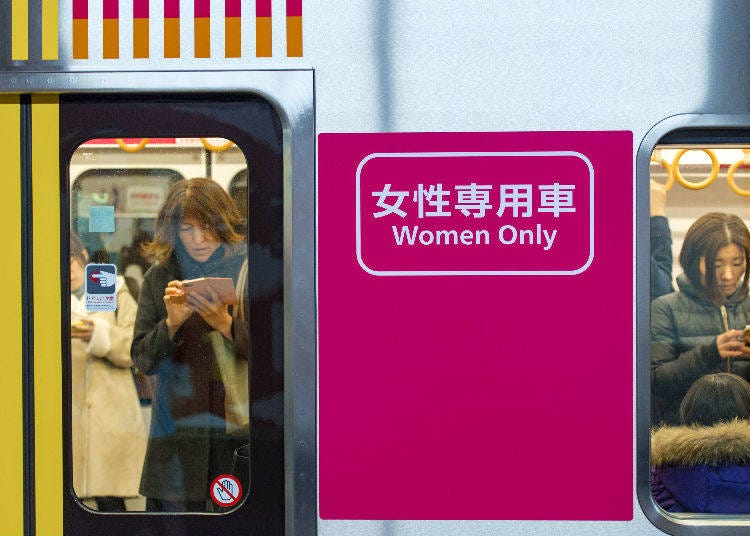 Most city trains in Japan have train cars designated for women only. These cars are designated on the train platform with some cars being of a different color than the regular cars. The location of these cars varies depending on the region and line, but in the Tokyo and Kanto area, generally these cars are the very first and very last cars of the train. At certain times, normally during the rush hours, only women can ride in these cars. Again, times may vary according to region and train line. Usually there is indication given on the train platform and through announcements, but generally you can understand by just observing those around you whether men can ride those cars or not.

10. Protect Yourself on Crowded Trains / Beware of Molesters 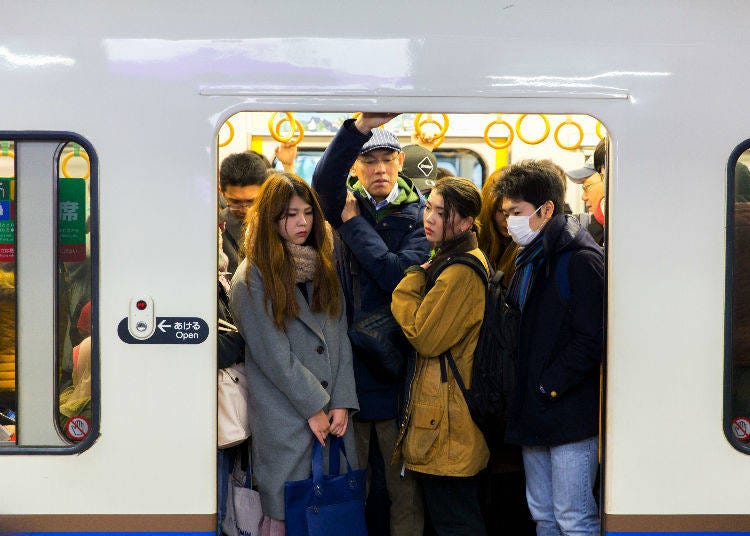 Riding crowded trains is very uncomfortable because you are often pressed up against other people. The swaying of the train can cause some people to fall forward or back, so you are advised to securely hold on to straps.
If the people around you are uncomfortably close, place a bag or other item between yourself and the other person and when the opportunity arises, move to a more open space.
If you should feel ill or discomfort when riding the train, if the windows are the type that can be opened, request someone to open them. Get off the train at the next station and request a station attendant for assistance because each station has a room where you can rest and receive medical attention if necessary. 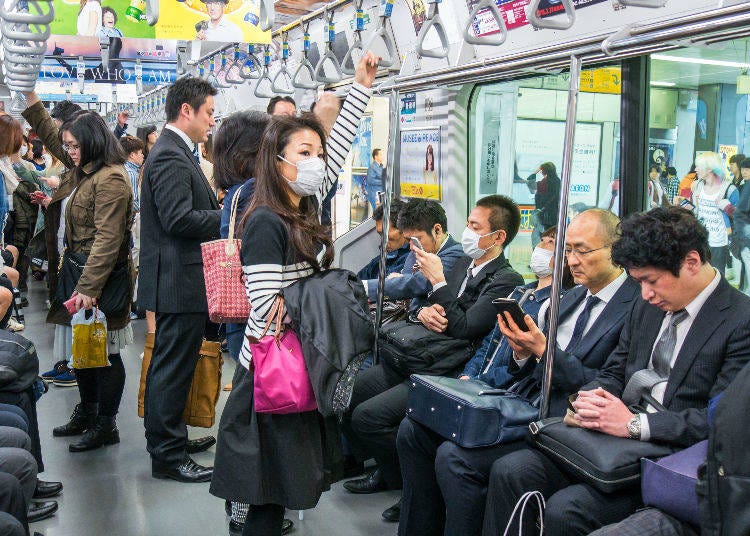 Also, the occurrence of molestation is highest when the trains are crowded. It is advisable for women to ride in those cars designated for them at these times. For men to avoid being mistakenly accused of molesting someone, it is best to keep both hands in plain sight, as by holding on to straps. Men also need to take precautions against being falsely accused of molesting others. 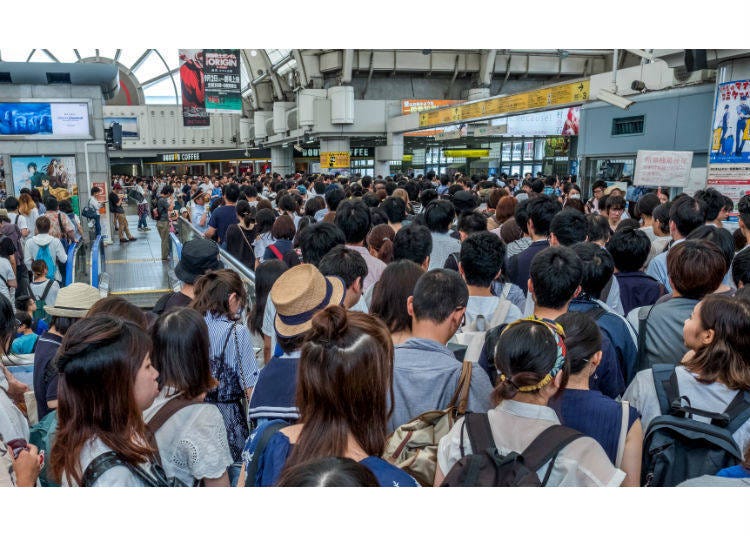 Train cars are different from automobiles in that there are no private spaces. If people acted and did as they pleased it would invariably lead to trouble. It is therefore important to keep in mind that trains are public spaces and attention paid to not bothering other people.