HOME Cheap and Expensive Goods: Prices in Japan as Compared to Other Countries 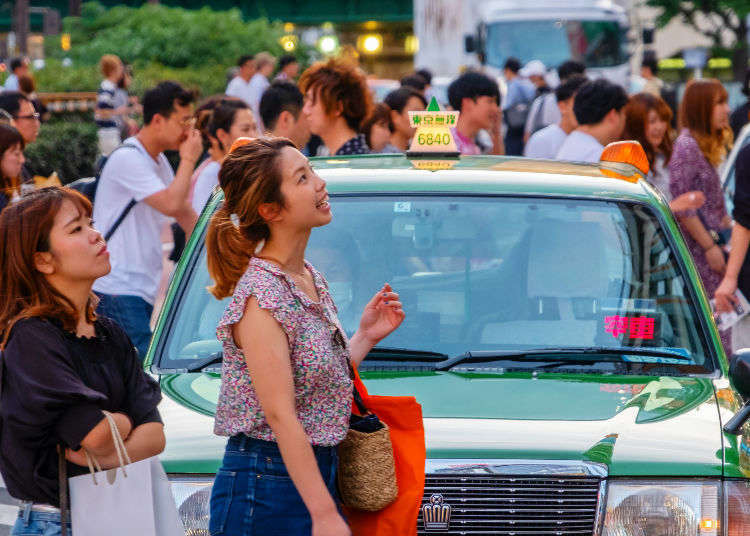 Cheap and Expensive Goods: Prices in Japan as Compared to Other Countries

Though it is often said that prices are generally high in Japan, some visitors from abroad are surprised by the cheapness of Japanese grocery stores and restaurant chains. In Japan, deflation continued for about 20 years after the bubble economy collapsed in 1998, and the rise of cheap restaurant chains and fast fashion brands grew. According to the competition of small profits and quick returns, it is said that some goods actually became cheaper.
So are prices in Japan really that expensive? Let us now introduce some of the cheapest and most expensive things in Japan as compared to other countries. 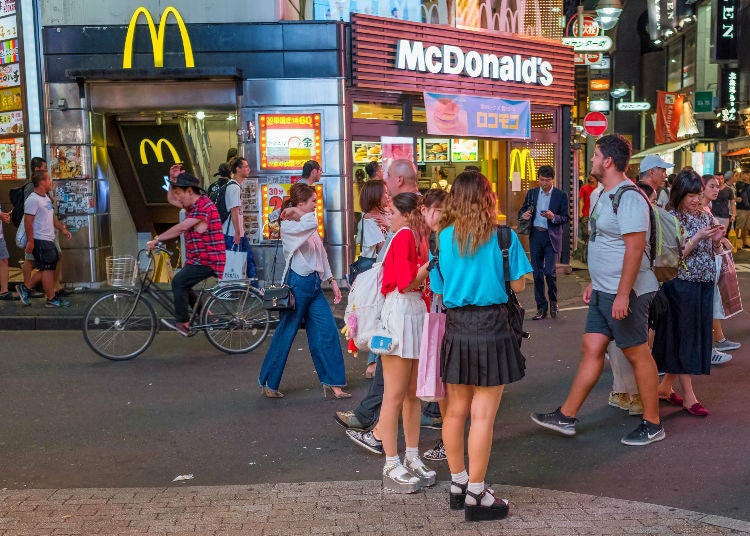 Often used as an indicator to compare the purchasing power parity of a country's currency is the "Big Mac Index," introduced annually by the UK economic journal, The Economist. Because the McDonald's Big Mac is available all over the world and made with products of nearly identical quality, its price is considered to be a good comparison marker of the costs of various goods such as raw materials, shop utility costs, and employee expenses.

Out of the top ten most expensive countries as announced by The Economist in their Global Big Mac Price Ranking, seven were European countries, the United States ranked 5th, Canada ranked 6th, and Brazil came in 9th. Japan ranked 35 out of the 56 countries, standing at a lower rank than Sri Lanka (33rd) and Thailand (34th), and priced at about $0.50 cheaper than the average $3.93 cost per country.
As we can see, Japan's Big Mac is surprisingly cheaper in comparison to other countries! 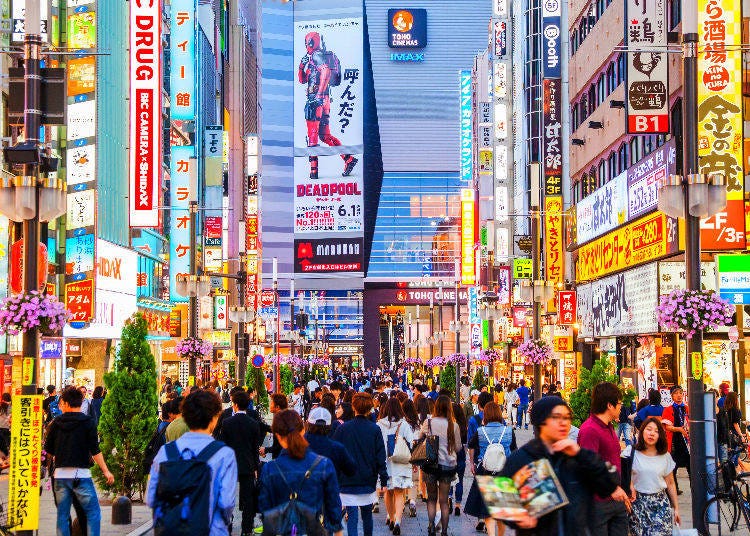 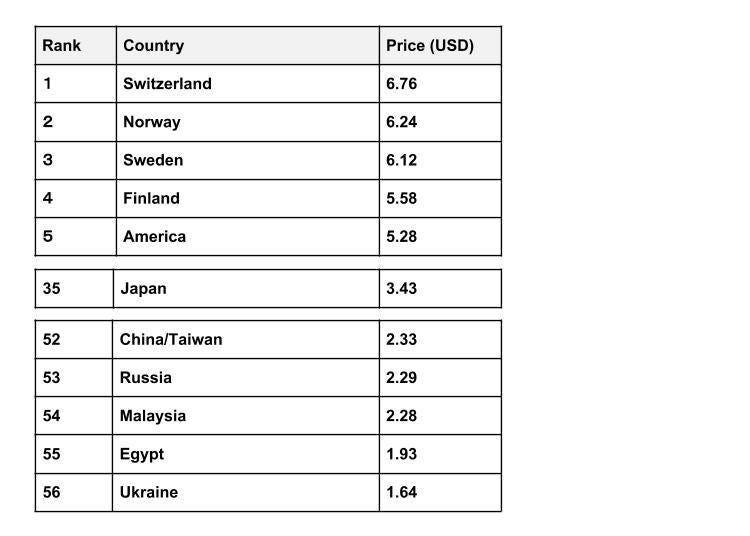 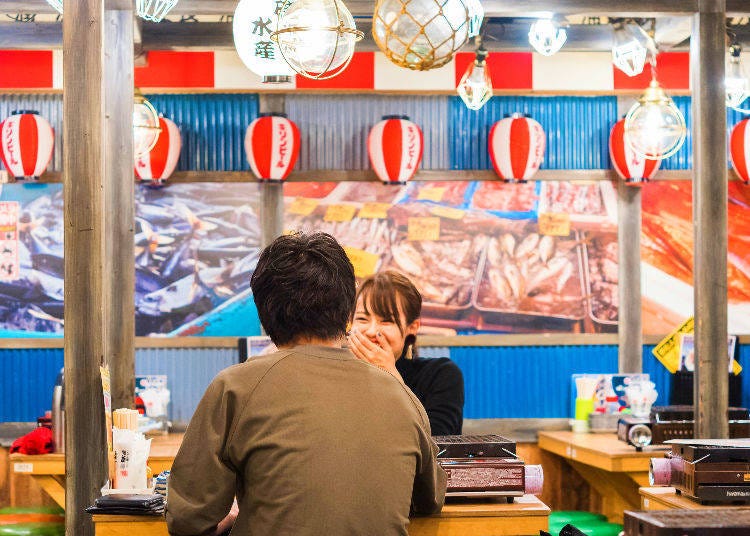 Some of the goods and services most recognized by foreigners as "cheap" are places such as izakaya, all-you-can-eat menus, and Japanese fast food chains. For example, all-you-can-eat shabu shabu restaurants go for about ¥3,000, all-you-can-drink plans including beer and cocktails are around ¥2,000, beef bowls go for ¥500 or less, and ¥100 dishes are available at kaiten-zushi restaraunts. So while there are many costly upper-class establishments, there are also many locations that you can enjoy a good meal at surprisingly cheaper costs! 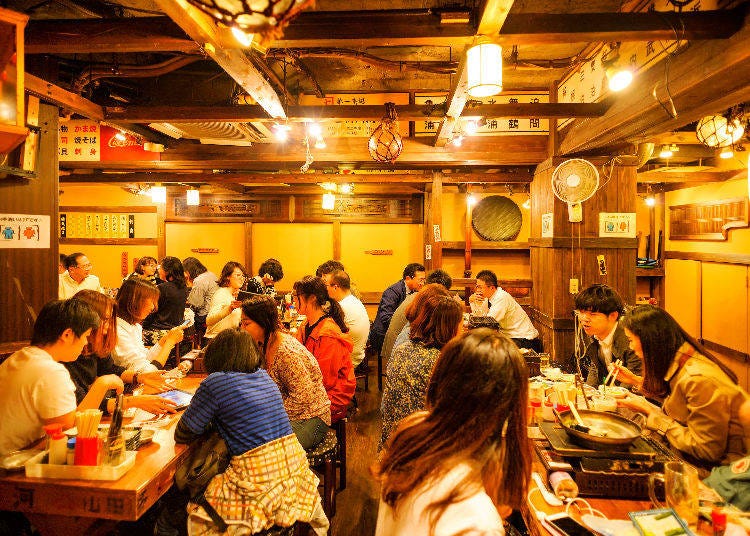 There are also several other Japanese food bowl chains, such as rice and udon, both around ¥500. 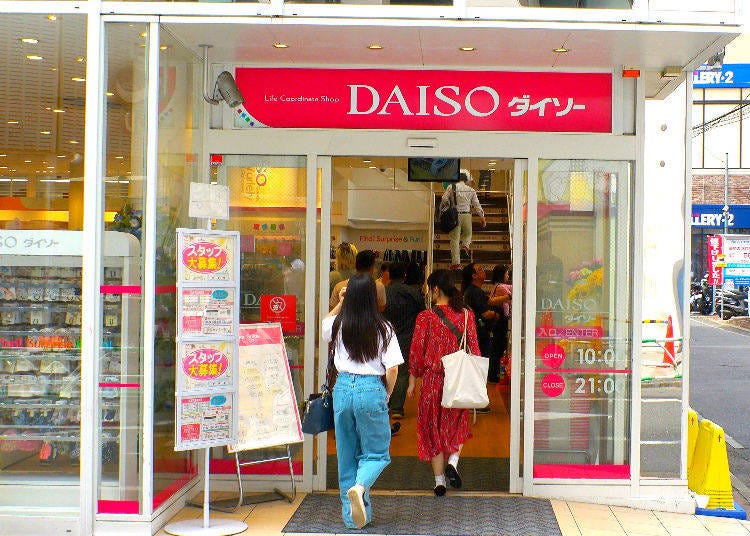 You can find all kinds of daily necessities in a Japanese 100-yen shop, such as kitchen items, washing and cleaning supplies, cosmetics, electronics, gardening tools, interior goods, party goods, and more! And almost everything is, in fact, ¥100! Not only are the items cheap but also high in quality. With tons of goods great for all your ideas and convenience, these shops are popular among Japanese and foreigners alike. From travelers’ necessities such as folding umbrellas and cosmetics, to souvenirs and miscellaneous goods, you can buy just about anything here! 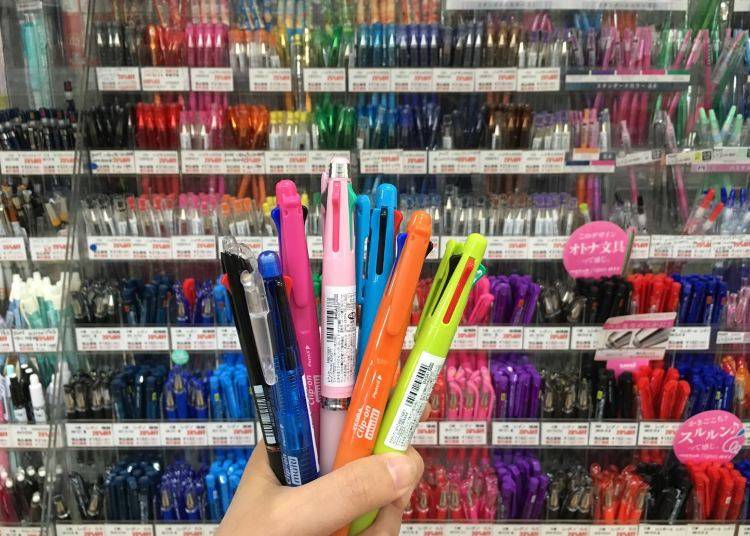 There are many types of stationary available in Japanese shops, both fashionable in style and versatile in functionality. Colorful ballpoint pens as well as ballpoint pens that you can erase letters can also be found for around ¥300. There are also many stationary available with cute characters, making them popular amongst students and adults alike. 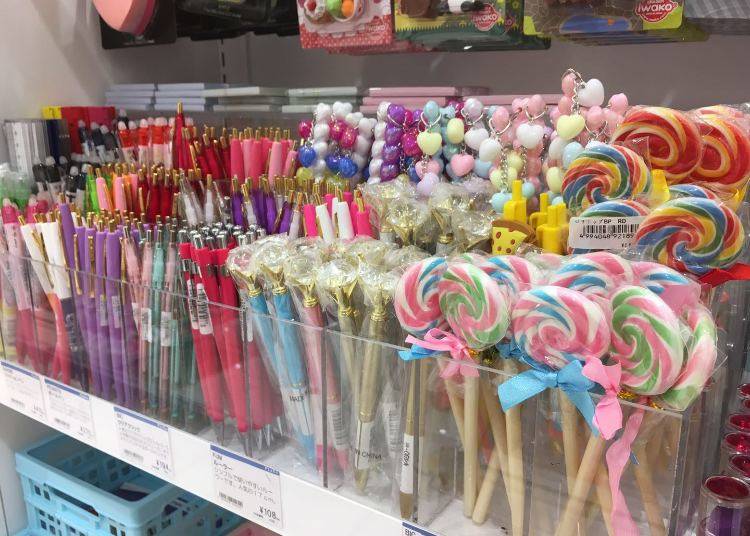 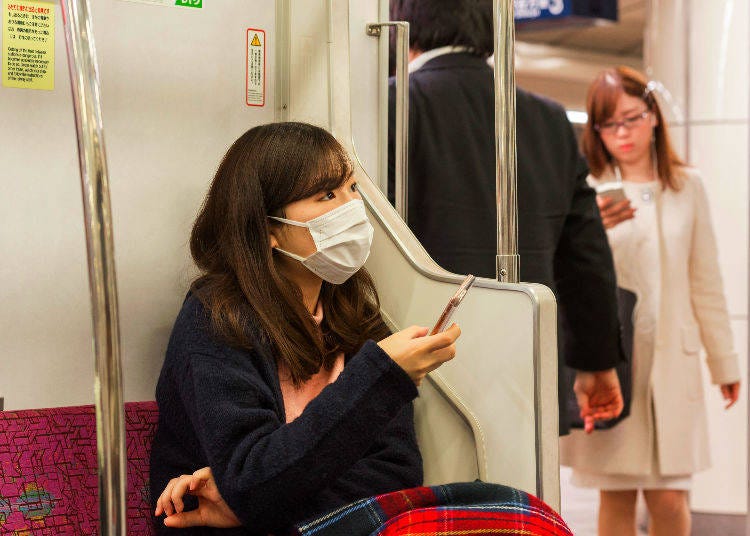 All Japanese citizens are subscribed to a national public insurance system. With this insurance, medical expenses to be paid by individuals at hospitals is 10% for elderly 75 or older, 20% for 70 to 74 years, 30% for less than 70 years, and 20% for children under 6 years. Dental treatment such as tooth decay is also included, and additionally, in the case of expensive treatments, you can even receive a medical expense tax deduction. For this reason, most Japanese people feel comfortable going to the hospital, even when only suffering something mild like a cold. 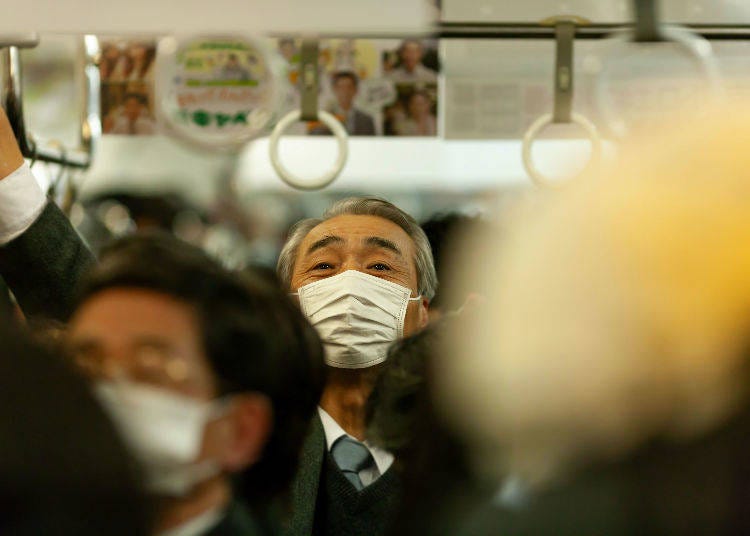 According to the following Individual and Private Medical Expenditure Ranking Per Capita graph which targets 44 major countries, the average medical cost is about 926 USD. Japan sat below that average at 718.23 USD. 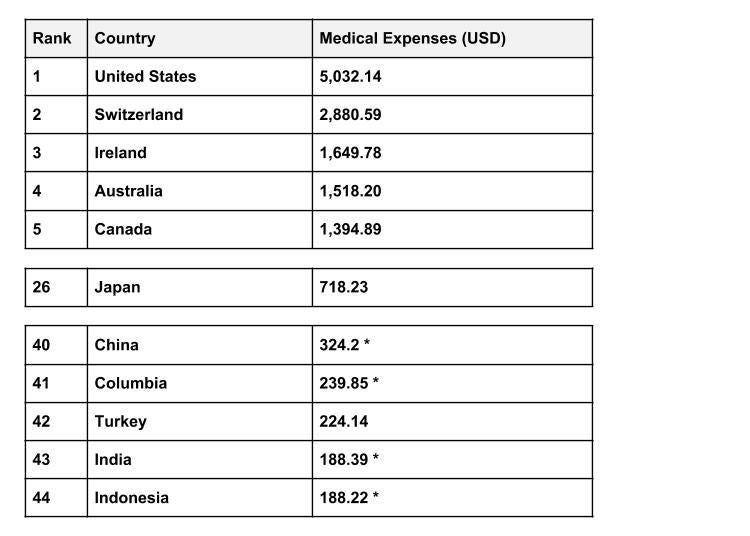 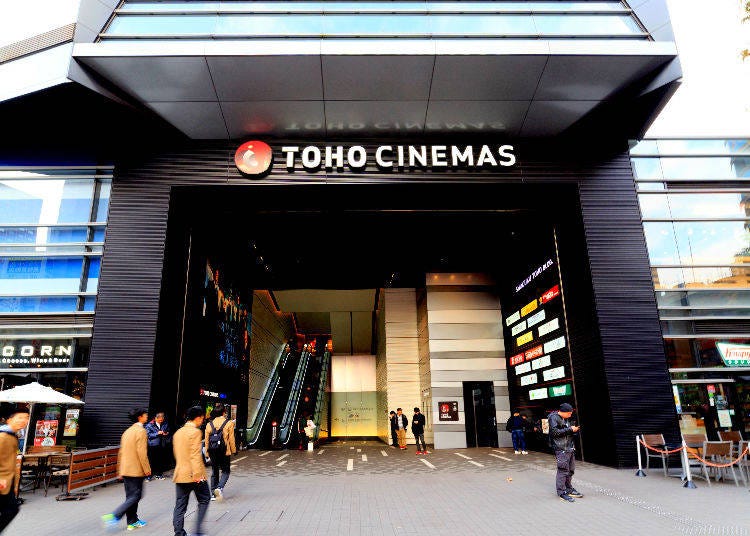 The admission fee for the movies is higher in Japan as compared to other countries. The average price amongst the target 87 countries is about 6.2 USD. Japan stands at about 11 USD, which is even more expensive as compared to the United States (about 8.4 USD), France (about 7.2 USD), and Korea (about 6.5 USD). 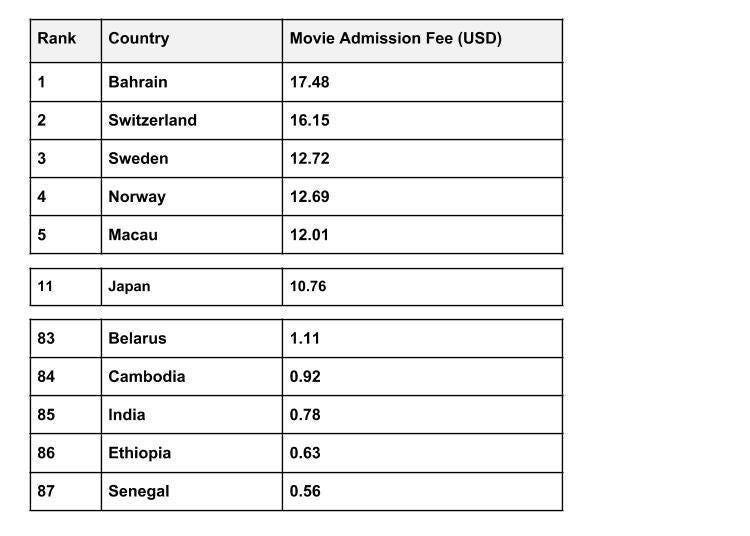 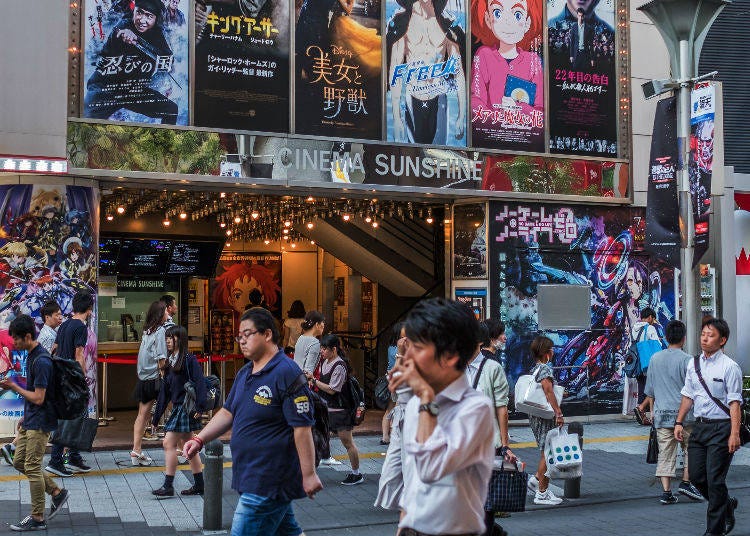 There are discounted entry times such as the matinee, the late showing, ladies' day and senior discounts at the Japanese cinema, and there are certain days when ¥1,800 tickets can be purchased at a discounted price of ¥1,100 to ¥1,400. Service may vary by theater. 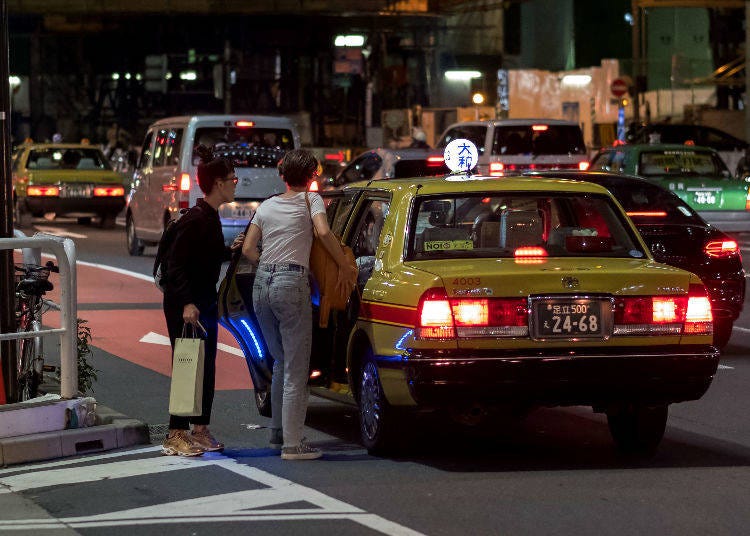 Many foreign visitors may not know how expensive Japanese taxis can be. This is because there are relatively few people who use taxis frequently thanks to the convenience of the public transportation system, which includes trains and buses throughout central Tokyo, with an average taxi distance of about 4 km. The taxi fares of Tokyo (the 23 wards of Tokyo, Mitaka, and Musashino City) were revised in 2017 to promote cheaper single fares for distances less than 4 kilometers.
The initial fare has been reduced from nearly ¥700 to ¥730 yen (up to 2 km) to nearly half from ¥380 to ¥410 (1.052 km), making it more convenient for shorter distances. However additional fares after the initial fare combined with time and distance were raised, so if the distance exceeds about 6.5 km, the cost can become even higher than you expected, so please take care when riding a taxi in Japan! 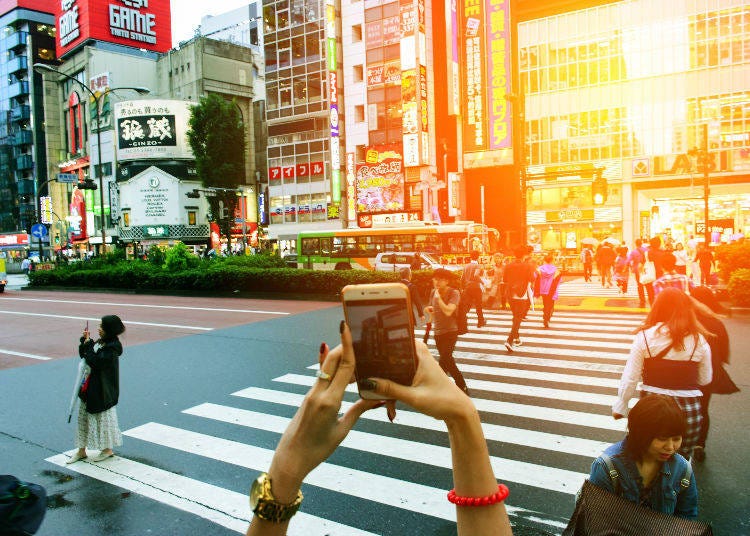 Foreigners who come to Japan from other countries where free WiFi spots abound may instantly feel that this luxury is rather scarce in Japan. Once called "Galapagos phones," Japanese mobile phone manufacturers have evolved their own standards to be slightly different than global standards. With the 2015 legislation allowing world standard mobile phone makers such as iPhone to manufacture phones with an unlocked SIM, even mobile phones purchased in foreign countries can now be used in Japan. 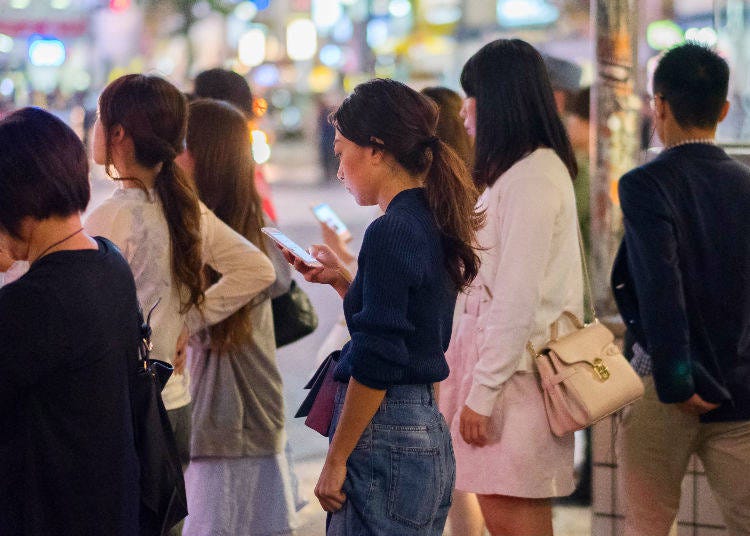 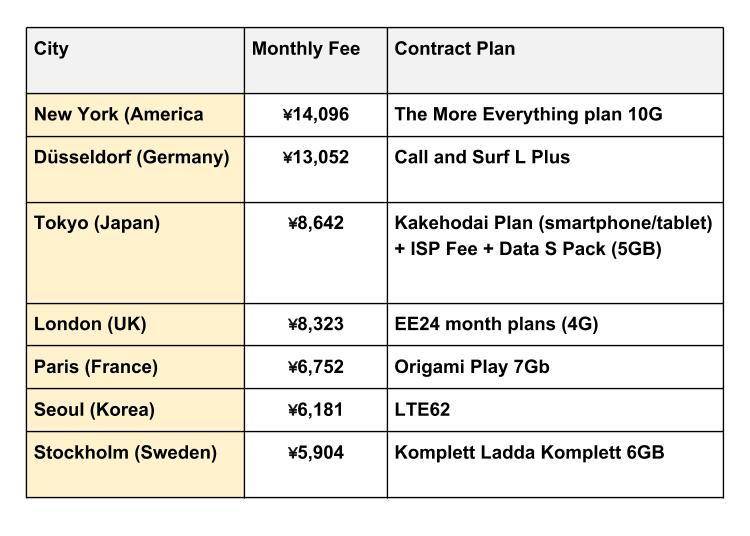 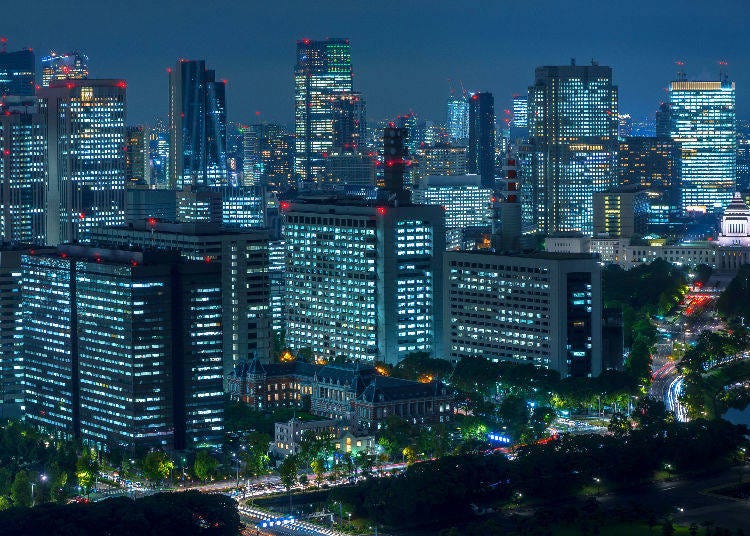 Though essential to the daily lives of everyday people, electricity and gas are notably high in Japan! According to the following surveys by the global statistics company Global Note of major countries around the world, "Household Electricity Expense Ranking by Country" and "Household Gas Expense Ranking by Country," household electricity costs in Japan ranked 11 out of 27 countries, and gas came in second highest amongst 25 countries. 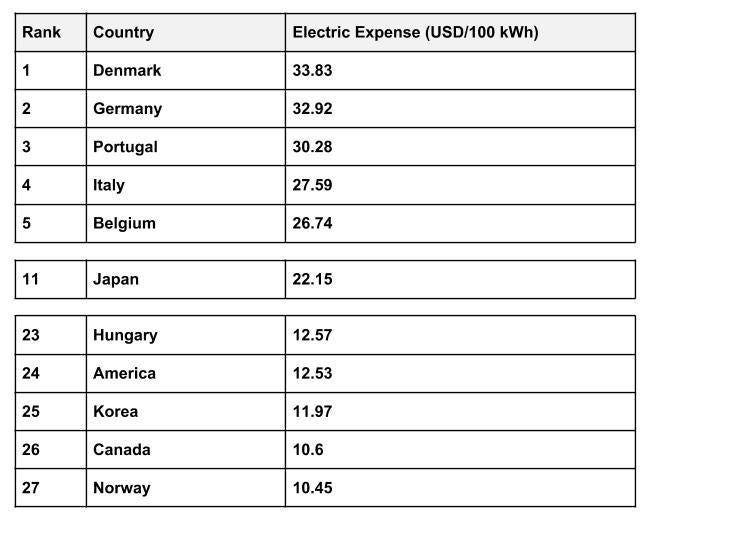 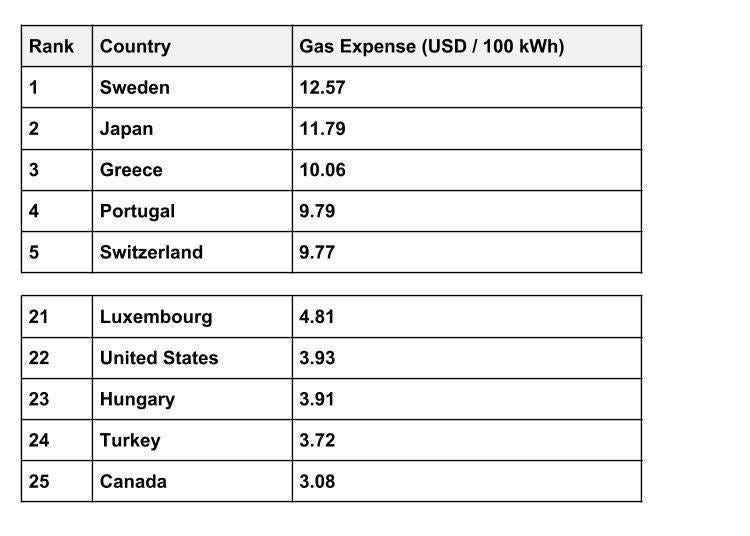 As we can see, Japan has a particularly high 100KW energy unit price, appliance manufacturers have launched many energy-saving home appliances one after another in the efforts to conserve electricity even further after the Great East Japan Earthquake of 2011. But now, exactly how much are these Japanese household gas and electric bills?
According to the household survey by the Ministry of Internal Affairs and Communications, the average cost of electricity and gas bills for Japanese households of 2-5 persons is as follows. 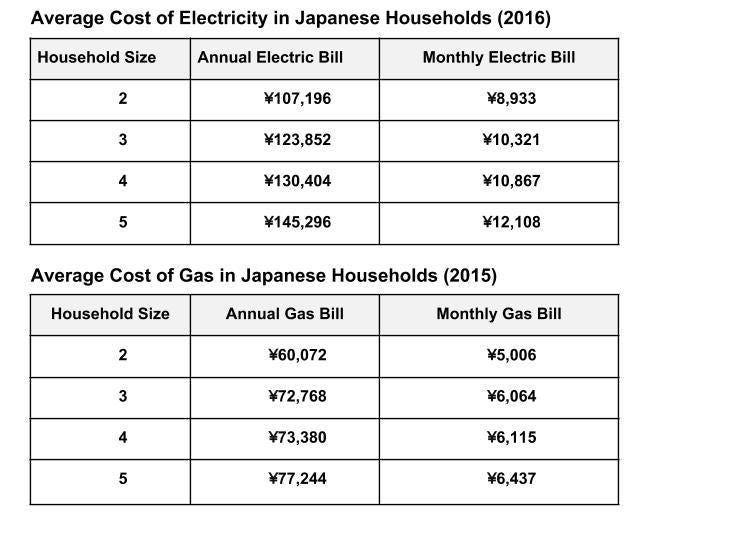 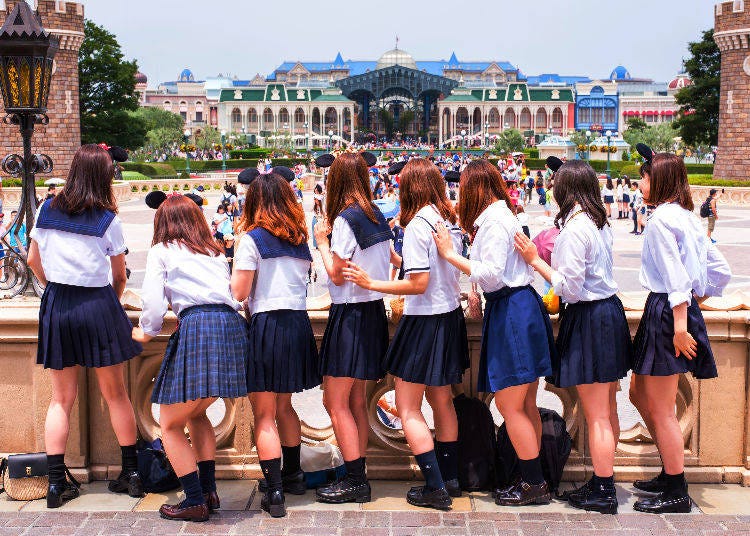 In Europe, countries such as France and Sweden offer free tuition to public universities for their citizens, with low costs in many other countries, so students can choose to go on to higher education without having to worrying very much about the financial burden. And in other countries where the tuition fee is known to be high, such as the U.S. and U.K, scholarships and low-interest financial loans are available. Japan, on the other hand, does not offer much in terms of scholarship and financial aid, and even children with good grades cannot go on to high school or university if tuition fees can not be paid. Even if you choose a public school with relatively low tuition fee, the cost for one child will still come out to about 10 million yen! For private schools, the cost is said to be twice as much!

The following shows the educational expenses for 4-year universities (6 years for medical and dentistry departments). 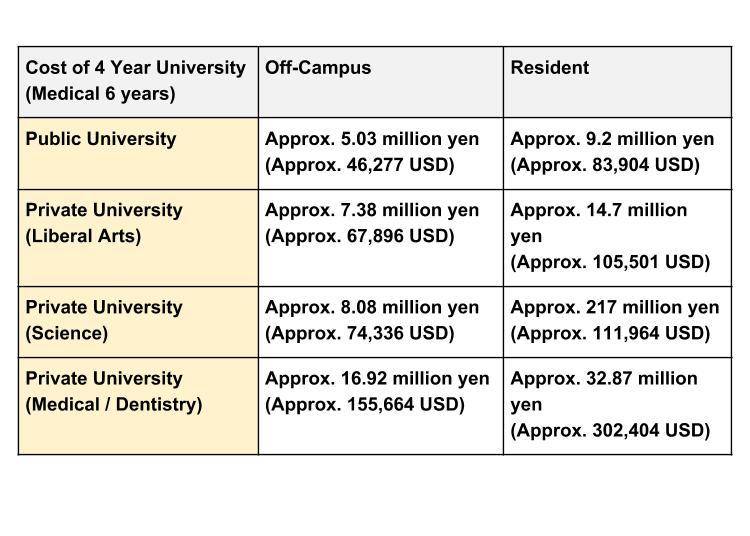 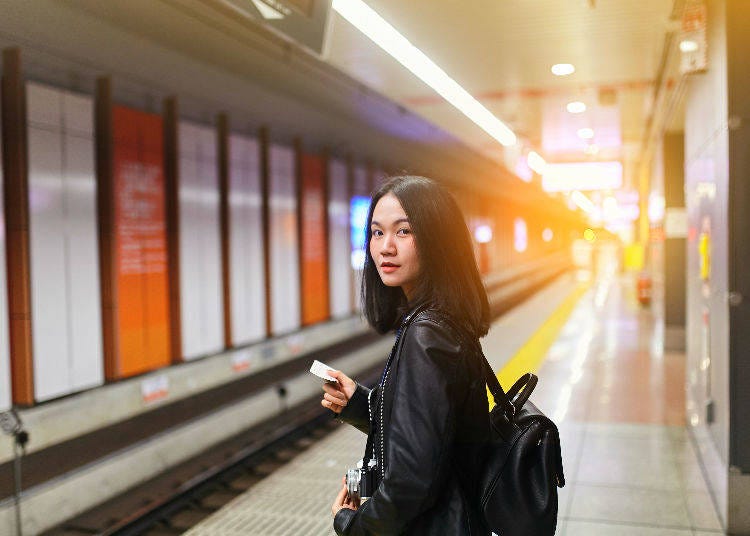 Some of the most expensive items in Japan are taxi fares, entertainment such as movies, and essential living costs such as utilities and education. However, Japanese medical expenses are notably cheap, which is good considering that this worldwide medical system is a particularly important part of our lives. Additionally, you can also enjoy delicious Japanese food and fashion without having to spend so much, with all-you-can-eat-and-drink options, fast food, and fast-fashion, which is another plus even for foreigners in Japan.
With all that being said, now that you know how to navigate the prices of Japan more effectively, with an awareness of what can be costly and what is more affordable, you will be able to more easily and effectively travel throughout Japan.