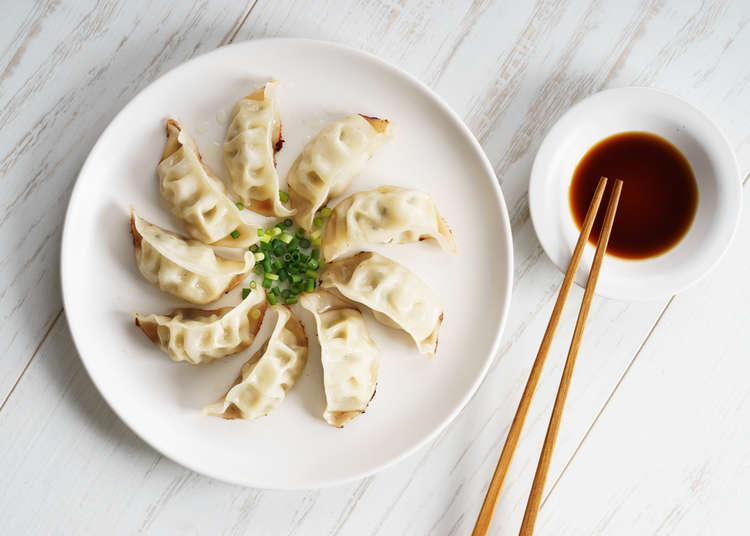 Gyoza are small Japanese dumplings which have been filled with ingredients like minced pork and vegetables. Although they can be boiled or steamed, normally they are fried and then eaten with a dipping sauce. They have been eaten in Japan since the Edo period, so they have quite a long history in Japan but it was after World War II that they really became popular. Japanese soldiers who had served in Manchuria had developed a taste for crispy Chinese dumplings and other delicious foods. So back in Japan they started a new demand for gyoza as its appearance and the way it is cooked isn’t too different to Chinese dumpling, although the flavor is another kettle of fish. Let’s learn more about gyoza!

The 3 Main Types of Gyoza 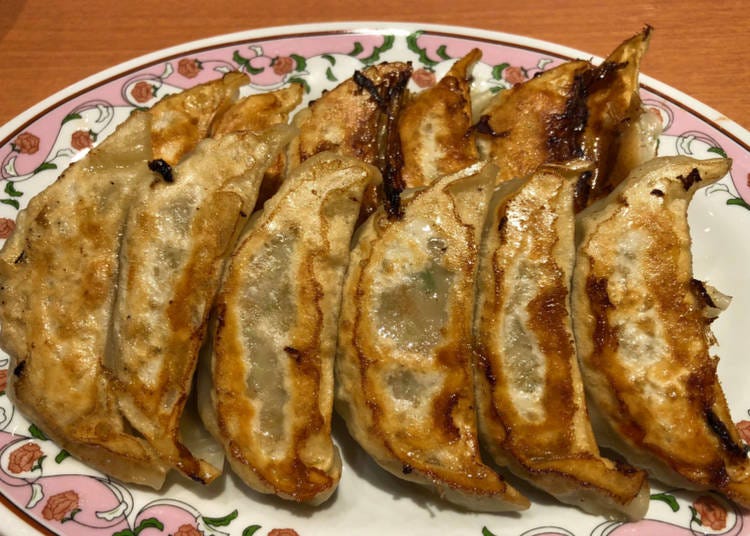 Yaki-gyoza
You are most likely to eat yaki-gyoza in Japan as it is one of the most popular styles of gyoza. While it’s made in a similar way to Chinese potstickers, Japanese gyoza are pan-fried for a short while before water is added and the pan is then covered to allow the gyoza to boil and steam. When the lid is removed the frying continues in order to make the gyoza more crispy. This adds a lovely crunchy finish to the gyoza along with the tender texture of its filling. Some specialty regional styles of preparing gyoza involve frying up bite-sized dumplings in a skillet, and allowing them to stick together as they cook so the individual pieces become one amazing crispy fried batch of gyoza dumplings. 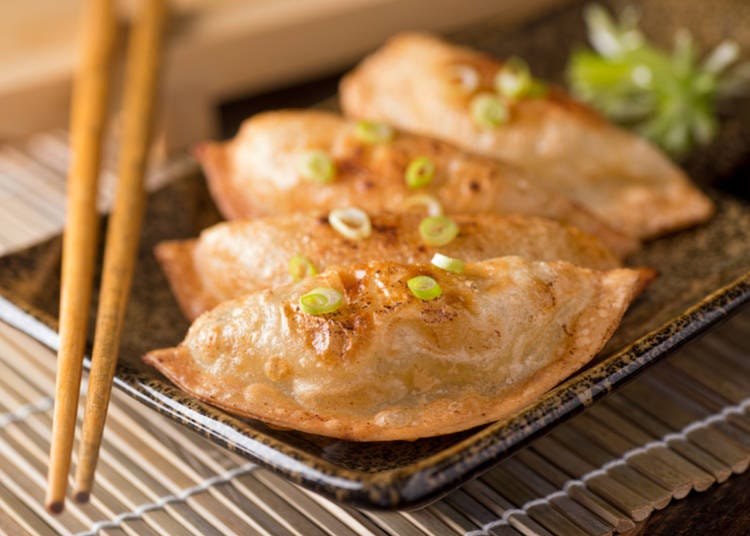 Age-gyoza
Age-gyoza is pretty much the same as yaki-gyoza with one important difference, it is deep fried! It is an interesting variation on gyoza, but you had better be careful when you take a bite as it is pretty hot.

Both yaki-gyoza and age-gyoza can come with different kinds of fillings, such as shrimp, cheese, kimchi and more! 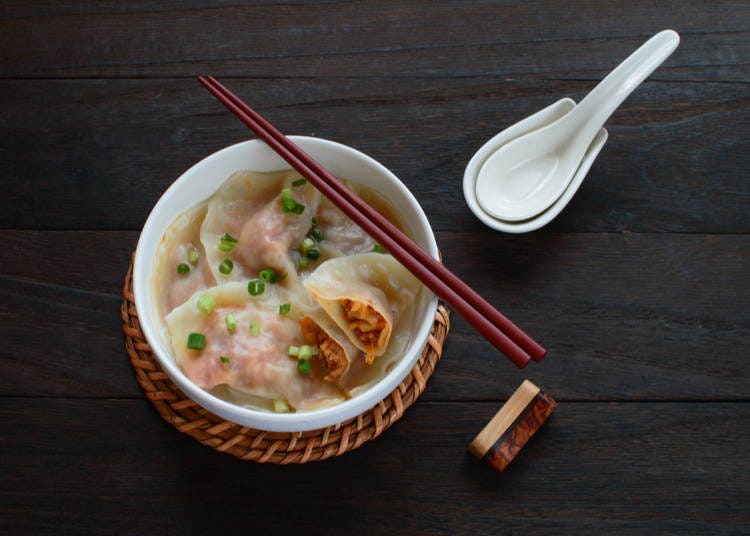 Sui-gyoza
Sui-gyoza is a slightly different verion which is boiled in water or soup broth, this gives the gyoza wrapper a tender and chewy consistency. If you want healthy alternatives to the rather decadent fried gyoza (it is fried in oil after all) then try mushi-gyoza, or steamed gyoza. Mushi-gyoza may be prepared and served in a bamboo steamer basket, similar to Chinese dimsum dumplings.

What's the Difference Between Gyoza and Potstickers?

Broadly speaking Japanese gyoza is quite similar to Chinese potstickers, or jiaozi, as they were originally based on these Chinese dumplings. You can also see how the word “gyoza” sounds not too dissimilar to “jiaozi.” However, there are some differences between these dumplings. For example, Chinese potstickers are doughier with a thicker wrapper, while gyoza typically have a very thin wrapper – partly due to the fact that it’s better suited for frying.

Gyoza also tend to be somewhat smaller than potstickers, intended for being eaten in one or two bites, and also tend to have a more finely textured filling. 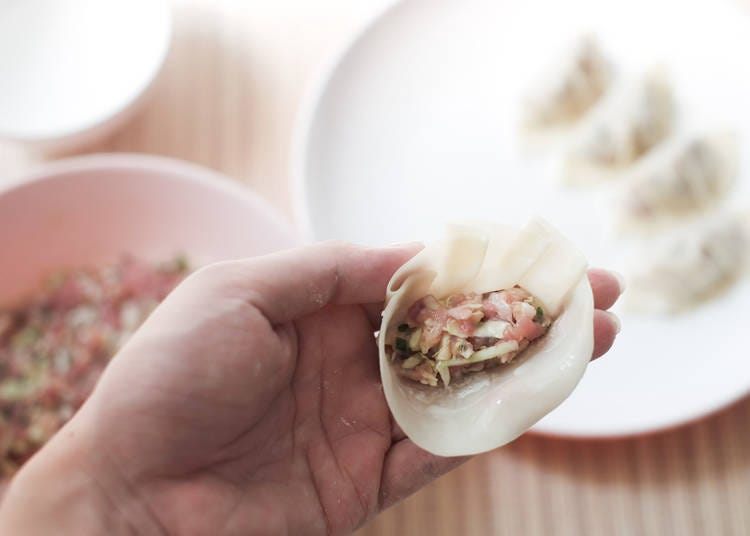 In Japan, the staple filling for traditional gyoza includes a blend of finely minced pork, shredded cabbage, and shiitake mushrooms for a contrast of textures. Some unconventional fillings, besides using lamb, include minced prawn and or other seafood, and even cheese, Japanese shiso herb, or natto (fermented soybeans). Vegans and vegetarian should look out for gyoza filled with crumbled momen (soft) tofu and vegetables.

Gyoza fillings can be seasoned with a variety of flavors. Nira (garlic chives) is one of the most popular choices but onion, garlic, ginger, sesame oil, and sesame seeds are also commonly used.

How to Eat Gyoza 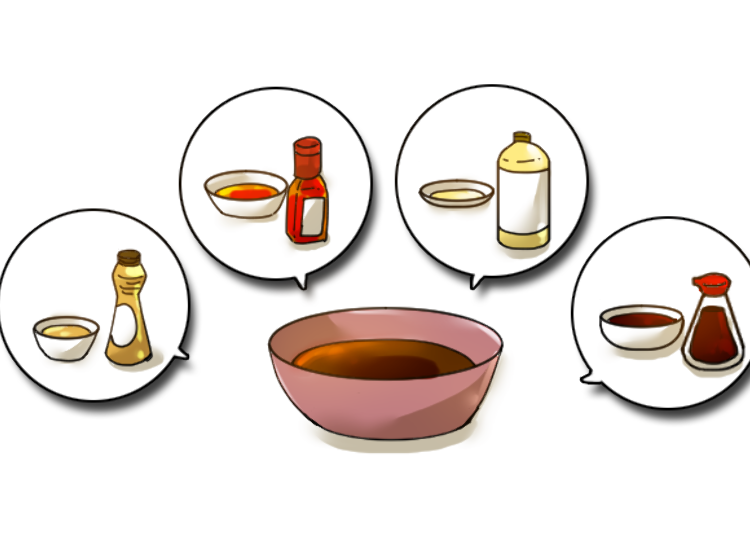 After it has been cooked it is best to eat it straightaway while it’s still hot, though some people like a cooler, or even cold, gyoza, however you don’t just eat it as it is. If you are eating in a restaurant then they will provide a dipping sauce, and if you buy it in a supermarket it will normally come with a sauce.

Some restaurants like to create their own individual sauce or will give you what you need to make your own bespoke sauce, like soy sauce, vinegar, sesame oil, chili oil, and garlic. Sui-gyoza may also be served in a bit of soup or drizzled in ponzu, a citrus soy dressing.

Where to Eat Gyoza in Japan 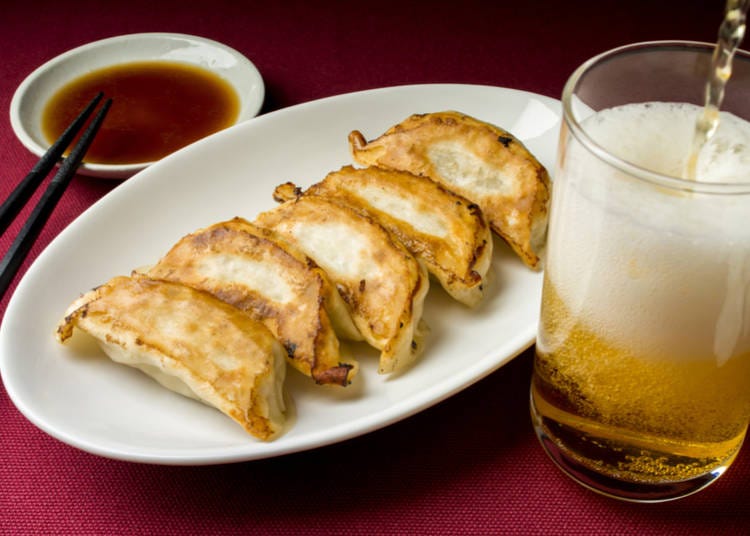 Take-Away
Many restaurants will allow you to order gyoza for takeaway; some street stalls too will have gyoza too. In places like Utsunomiya (about one hour travel from Tokyo) you will be spoilt for choice as gyoza can be found everywhere, from convenience stores to random little stalls.

Chinese Restaurants
For dining out, gyoza is commonly eaten at Chinese restaurants, ramen shops, izakaya, and gyoza specialty stories. “Chuka ryori” (meaning Japanese-style Chinese) restaurants serve Chinese dishes that have become popular in Japan such as fried rice, stir fries, and especially gyoza. Many ramen restaurants, which are also historically based on Chinese cuisine, offer individual sized portions of fried gyoza alongside their ramen. In fact, some ramen restaurants are known even more for their gyoza dumplings than for their ramen.

Izakaya
It is a typical dish at many izakayas, probably because it is a good side dish for groups of people to share. Gyoza specialty shops serve up Japanese dumplings in both group and individual serving sizes, and it’s common to eat gyoza as part of a set with a bowl of rice.

Supermarkets
In Japanese supermarkets you can find both frozen and refrigerated gyoza, all you need is a place to fry them!

Try Different Varieties of Gyoza in Japan to Find Your Favorite Dumpling!

No matter where you go in Japan you will probably come across gyoza somewhere, even if it is just being given out as a free sample in a supermarket, and it is definitely worth a try. It is very popular amongst Japanese people, and without a doubt it is delicious. So next time you visit Japan you should look out for it!

Search for gyoza restaurants!
Gyoza-Dokoro Tachibana: Eat "0-Yen Gyoza" 'til You Drop!
Related: Easy-to-make Japanese Recipes!
*This information is from the time of this article's publication.
*Prices and options mentioned are subject to change.
*Unless stated otherwise, all prices include tax.