HOME Sunny Side Up or Omurice? 6 Japanese Egg Dishes You Have to Try 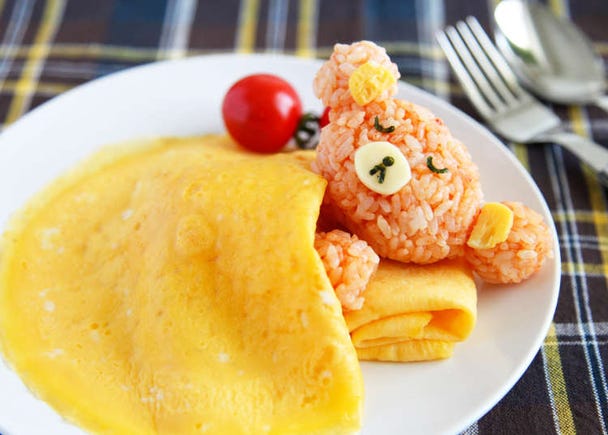 Sunny Side Up or Omurice? 6 Japanese Egg Dishes You Have to Try

Just as in the west, eggs are a big part of Japanese cuisine. Although they may share a lot of similarities, Japanese food culture takes preparing eggs to a whole new level. From dishes prepared with raw eggs to mounds of rice wrapped in egg omelets and topped with ketchup, Japanese have a very unique take on egg cuisines. Don’t let the raw egg part scare you though. These dishes are not only perfectly safe to eat, they’re scrumptious! 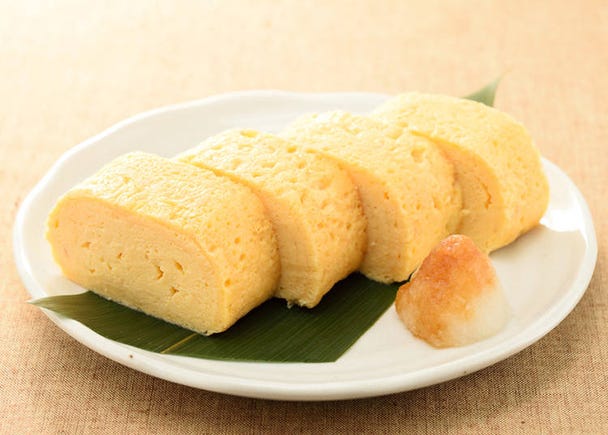 The perfect way to prepare eggs to take with you for lunch! Tamagoyaki, or literally translated “grilled eggs,” is made by stacking up several thin layers of slow-cooked egg. Sugar, soy sauce, or sometimes even sake or mirin are often added for flavor. You may know of them as a type of sushi served at your local Japanese restaurant, but in Japan, they are also often made by Japanese wives and put into their husband’s and children's bento boxes for lunch. Tamagoyaki are often made into a rectangular shape, making them easier to pick up with chopsticks. The shape comes in handy when neatly fitting them into bento boxes as well!

Other than bento, tamagoyaki is also commonly served as part of a traditional breakfast in Japan, along with miso soup, fish, pickled vegetables, and rice. With a delicate and fluffy texture, tamagoyaki seems to melt in your mouth as you chew. Being somewhat of a standard way to serve eggs in Japan, tamagoyaki is definitely worth a try! 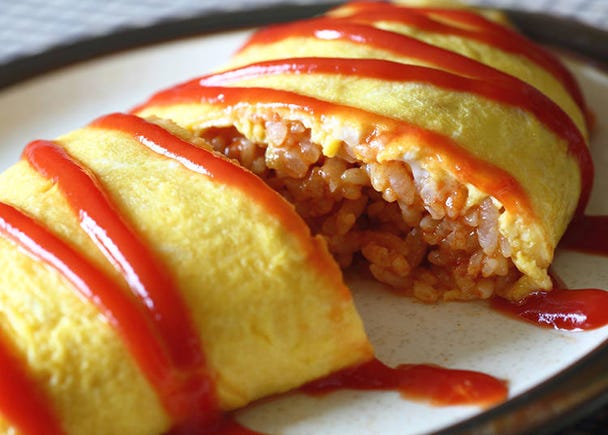 Omurice is yet another example of Japan borrowing an idea from the west and making it arguably better. Legend points its origin to a western-style restaurant in Ginza, omurice is an abbreviation of the Japanese pronunciations of the words “omelet” and “rice.” Just as the name suggests, omurice is made by slapping a juicy omelet on top of a mound of steamed rice, only before smothering it in ketchup. That’s right, ketchup. Given the sweet taste, it’s especially enjoyed by children and frequently appears on the kids menu at family restaurants, but that shouldn’t stop omelet lovers of all ages from indulging in this sweet, savory dish. 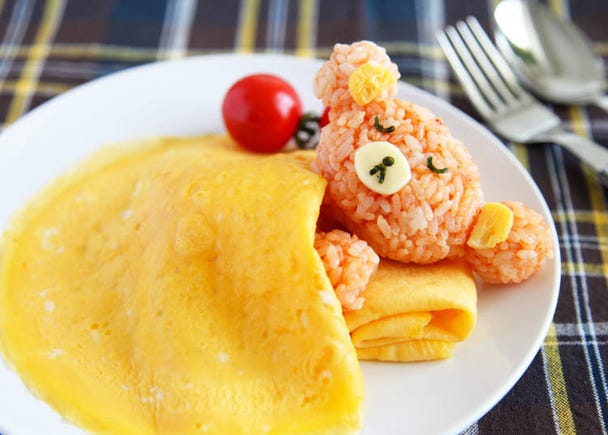 Now popular all around Japan as well as several other countries, omurice can be found at most family restaurants, certain types of cafes, and even pre-made omurice dishes are available at convenience stores or bento shops. Release your inner child and dig into some rice, omelet, and ketchupy goodness! 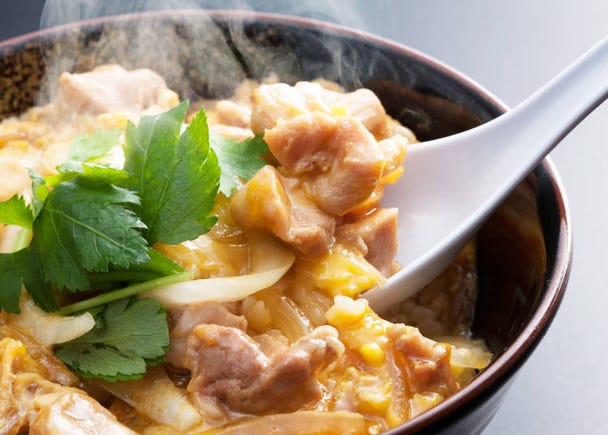 What is Japanese food if not served in a big bowl of rice? Oyakodon is one of many popular “donburi” or rice bowls in Japan. The literal meaning of oyakodon is “parent-child bowl” as the main ingredients are chicken and egg. Scallions or sometimes regular onions are added and all of the ingredients are simmered together before served atop a large bowl of rice. The way the juices from the ingredients seep into the rice makes for a mouth-watering meal that’s sure to fill you up.

Although you can find these in some fancy restaurants, they are usually served as fast food alongside other quick dishes such as soba or udon. If you go into one of these stores during lunchtime on a weekday, you can expect to see the shop filled with Japanese men in business suits getting their fill before they head back to work! 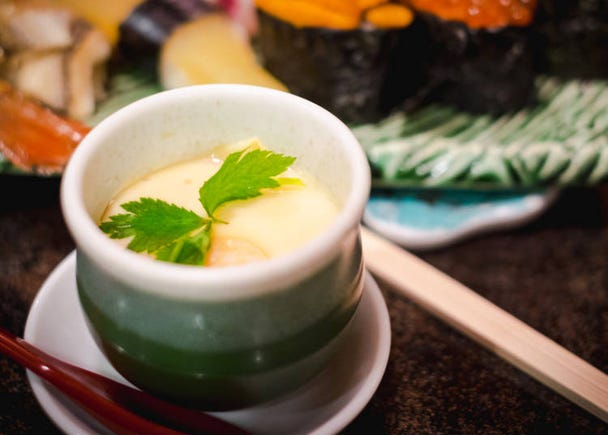 If you like custards then you’re in for a treat! This isn’t so much of a dessert as it is part of a meal, but that doesn’t make it any less tasty. This steamed savory egg custard is packed with flavor with ingredients like chicken, prawn, gingko nuts, shiitake mushrooms, spring onions, and anything else your taste buds desire. As the name suggests, the ingredients are steamed in a “chawan” or tea bowl and it’s one of the few Japanese cuisines that are actually traditionally eaten with a spoon. The custard is generally made with egg, mirin, dashi, and soy sauce to create a silky smooth taste.

This dish is great eaten either warmed or cooled, making it perfect for all seasons! If it is served heated up though, make sure to eat it before it cools down because it’s proper manners in Japan to eat hot food while it’s still hot! 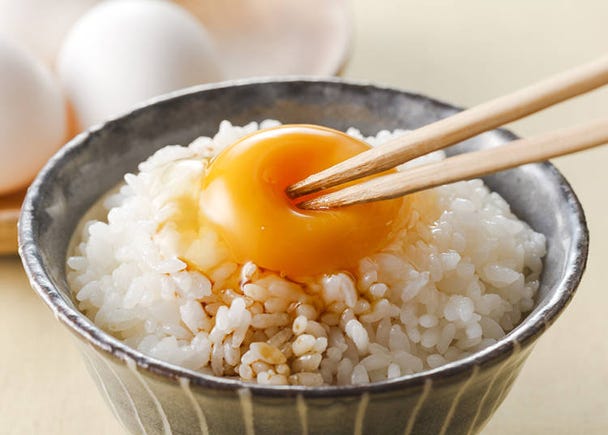 An incredibly simple and traditional Japanese egg cuisine, tamago kake gohan, also known as TKG, is a popular breakfast treat. A very uncomplicated, yet tasty meal, TKG is most commonly made by inserting a raw egg into the center of a bowl of rice, adding some soy sauce, and mixing the three ingredients together until the rice becomes a consistent golden yellow. Other ingredients such as salt or seaweed flakes can also be added if you prefer. There is not much to say about the flavor except that it’s delicious!

Its gooey texture and salty taste is truly a unique experience and is extremely easy to make so it’s perfect for those times that you don’t have the energy to cook or do a lot of dishes! Although it is a simple dish, you can always get creative by adding your other favorite seasonings or even try adding a second egg if you really want to be adventurous! 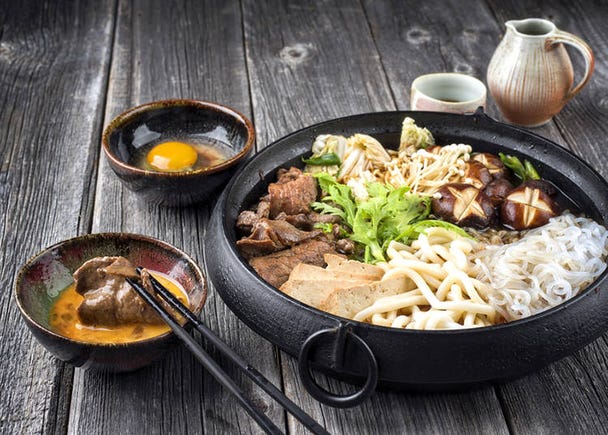 Raw eggs are also key ingredients in seasonal dipping sauces. As winter approaches and you’re looking for a way to warm your body up, look no further than sukiyaki. One of many Japanese hot pot meals, sukiyaki is enjoyed by heating meats (usually beef) and vegetables in a pot, then taking the ingredients out at a time and dipping them in a plate of raw egg before eating them. Sugar, soy sauce, sake, dashi, and mirin are often added to the boiled water, although the exact preparation method varies from region to region. Similar to yakiniku, the beef is prepared in thin, bite-sized slices so that they may be cooked, dipped, and eaten one-by-one.

Sukiyaki can be enjoyed both at home with family or in sukiyaki restaurants. A lot of Japanese tend to have sukiyaki parties with their friends, family, or co-workers near the end of the year . Many restaurants even offer all-you-can-eat deals in which you can keep ordering vegetables and meat to put into the pot until the allotted time is up! 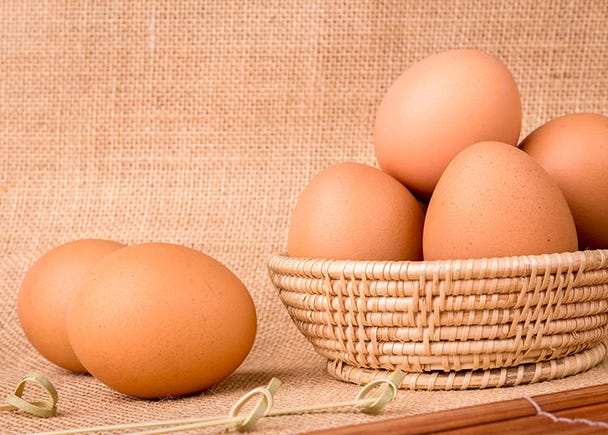 Though trying out new cuisines from new cultures can at times be somewhat daunting, each and every of these egg cuisines is a must-try. If you lack a little bit of courage when it comes to new foods, try tamagoyaki first and work your way to TKG. Although all of these dishes can be made at home, there’s nothing more authentic than the original—so, if you haven’t already, come visit Japan and try out all of these great egg cuisines!