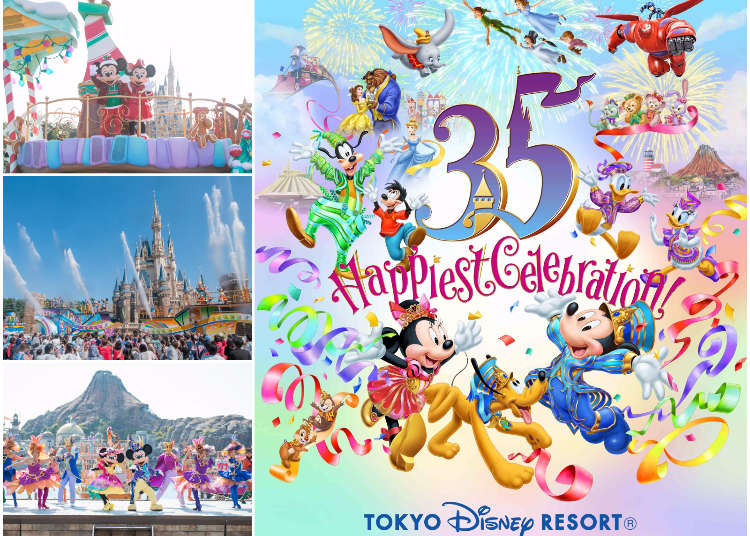 Already planning your Japan trip in 2018? If you're a Disney fan, it's the perfect time to visit! Tokyo Disneyland is about to celebrate its 35th anniversary and its "Happiest Celebration!" events will start from April 15, 2018 to March 25, 2019. With major festivals and seasonal activities planned for this limited time, 2018 is definitely looking to be a lively year!

This article introduces Tokyo Disneyland 35th Anniversary event information, as well as the major themes. Disney fans can check out the itinerary and decide when to visit for a magical holiday! 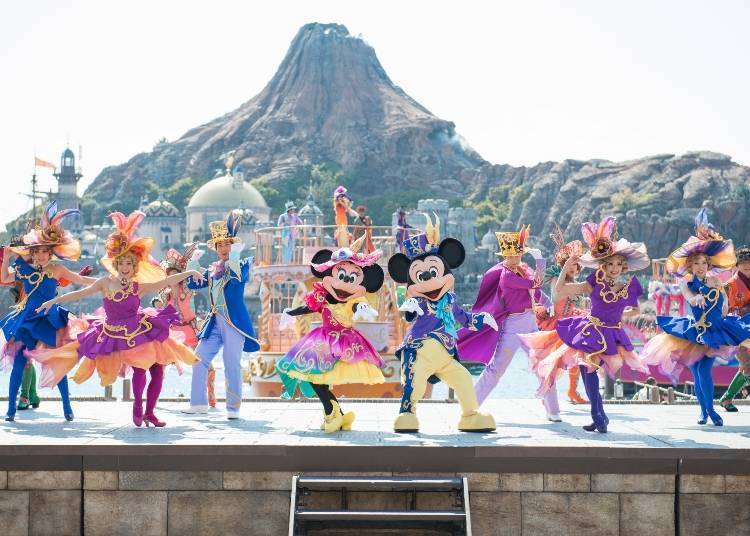 Tokyo DisneySea will be presenting this annual springtime event for a stylish and elegant Easter. The Park will be decorated with colorful Easter eggs and bright flowers, and Mickey Mouse and the Disney Friends will appear with artists to show off their best Easter fashions in the main entertainment, presented in Mediterranean Harbor. 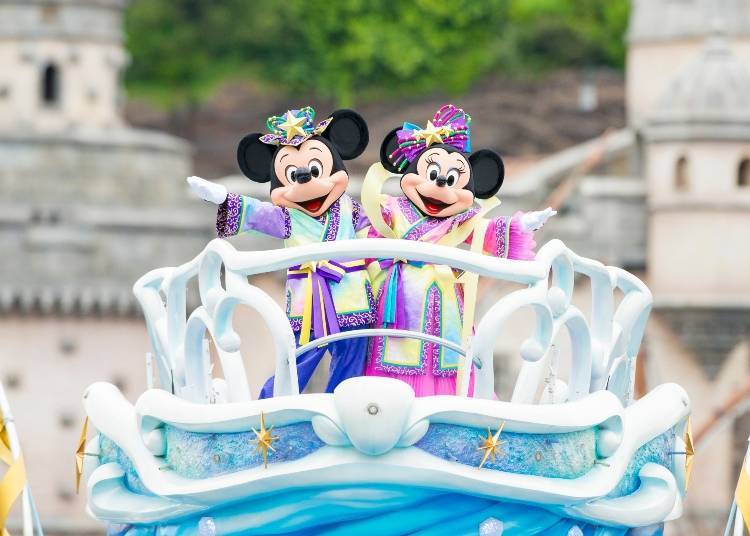 Tokyo Disneyland and Tokyo DisneySea bring a unique feel to this traditional Japanese festival. Mickey and Minnie Mouse will be dressed as Hikoboshi and Orihime, the two star-crossed lovers of this festival, for greeting shows to take place at both Parks. Guests can also enjoy the festival by writing their wishes on special cards to be hung at the designated sites in both Parks. 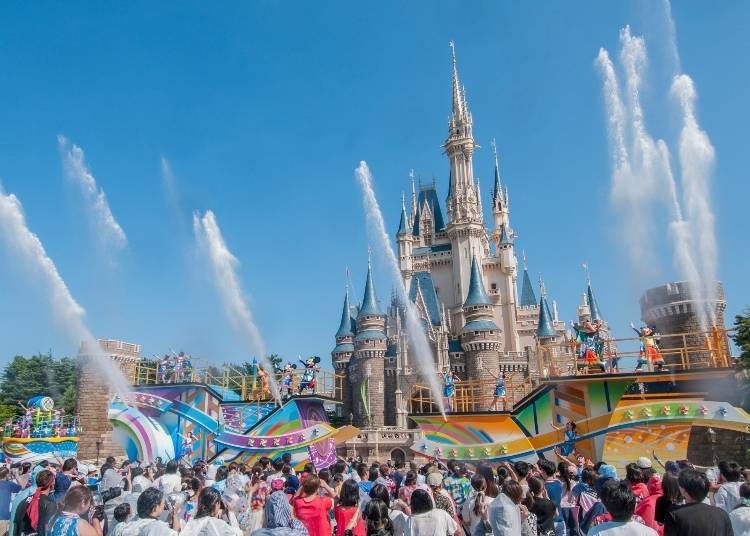 Guests can experience a Japanese summer festival,
Disney-style with this special event. The main entertainment program features a Japanese arrangement of popular Disney songs and lots of spraying water, as Mickey Mouse and the Disney Friends heighten the celebratory mood of the anniversary year. 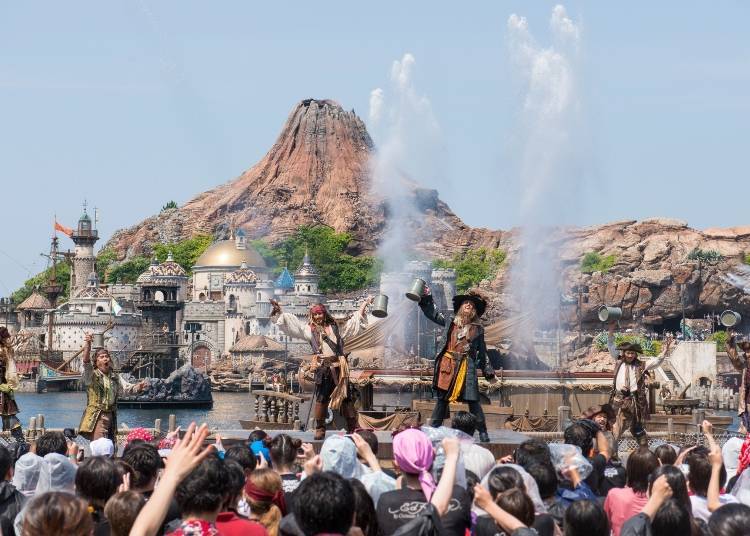 This special event brings the world of Disney’s Pirates of the Caribbean film series to Tokyo DisneySea. At Mediterranean Harbor, Guests can enjoy a show featuring Captain Jack Sparrow, Captain Barbossa and their motley crew of pirates, as well as a variety of atmosphere entertainment presented throughout the Park. The pirate theme is also the inspiration for special merchandise, menu items and decorations, transforming Tokyo DisneySea into a swashbuckling world of pirate fun! 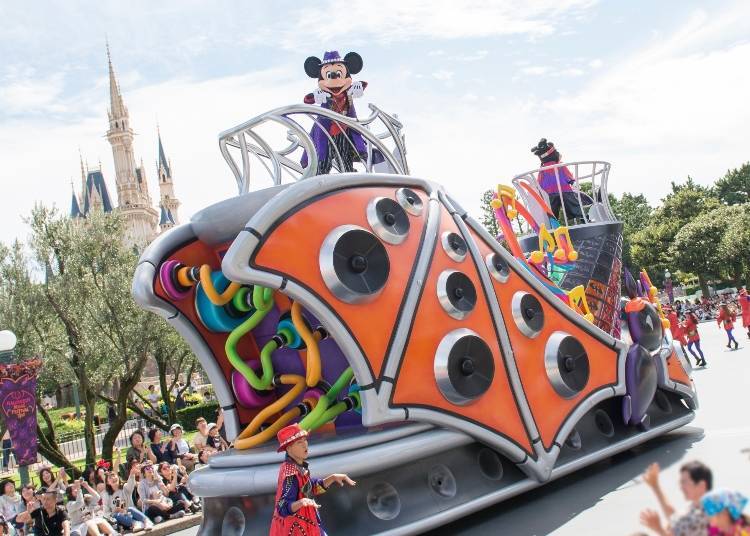 Experience “Disney’s Halloween” unique to each Park.
• Guests can look forward to a new theme at Tokyo Disneyland for 2018. Be prepared for a Halloween that can only be experienced at Tokyo Disney Resort!

• Tokyo DisneySea will present a cool, but eerie Halloween event themed to the Disney Villains*. In the main entertainment program presented on the waters of Mediterranean Harbor, Guests can experience the alluring world of the Disney Villains as they come together with the Disney Friends for a frightfully cool Halloween show. Also during this period, the Tower of Terror will be presented in a special version.

*“Disney Villains” refers to the villain characters who appear in Disney films. 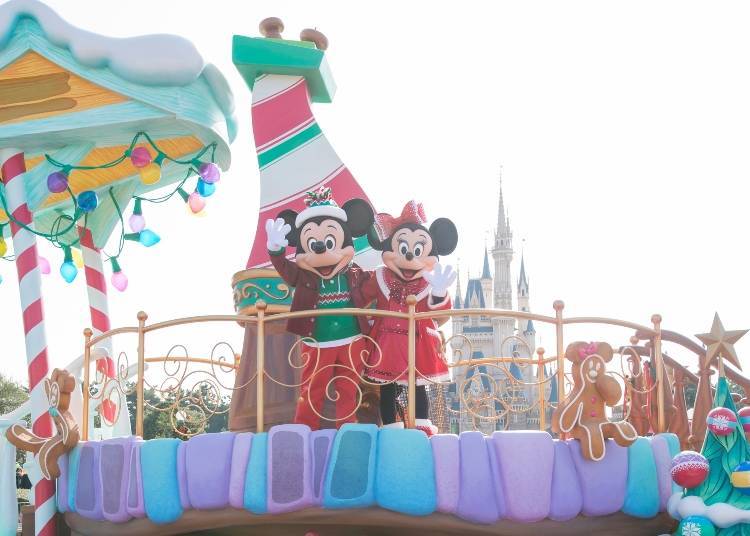 • At Tokyo Disneyland, Guests will enjoy a Christmas themed to “pop-up storybooks full of the Disney Friends’ Christmas fun.” The parade presented along the parade route will bring to life pages from storybooks showing the Disney Characters having fun at Christmastime. The Park will be filled with colorful and festive decorations for the happiest Christmas yet.

• Tokyo DisneySea will feature a new theme for Christmas 2018 which will bring a fantastic and romantic atmosphere to the Park. 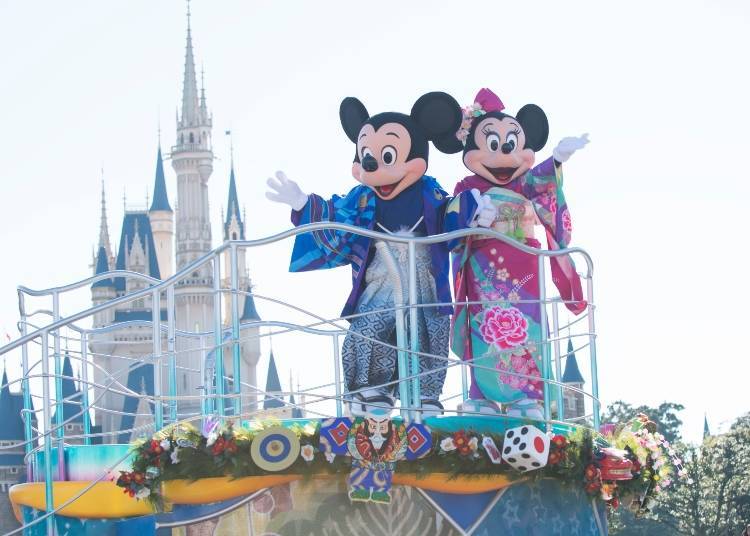 Both Parks will celebrate the start of the year with colorful Japanese-style New Year’s decorations at the entrances, traditional New Year’s cuisine and merchandise featuring the zodiac animal for the year. Mickey Mouse and his Disney Friends will be dressed up in kimono to welcome Guests in Japanese style. 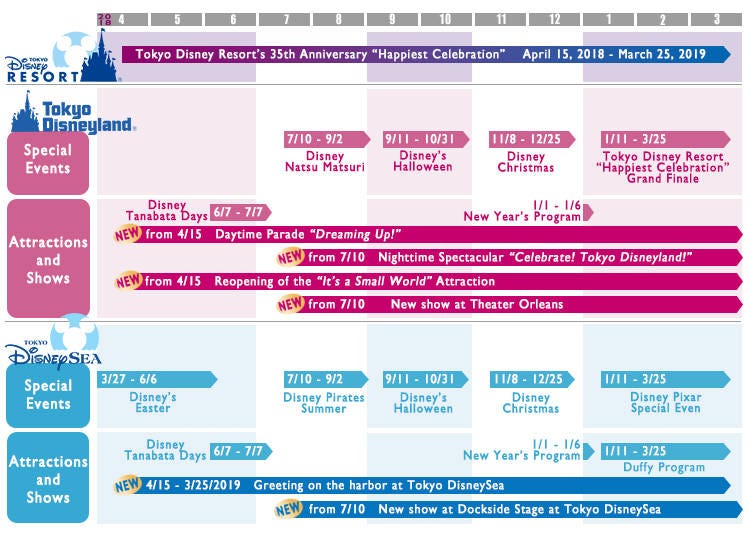 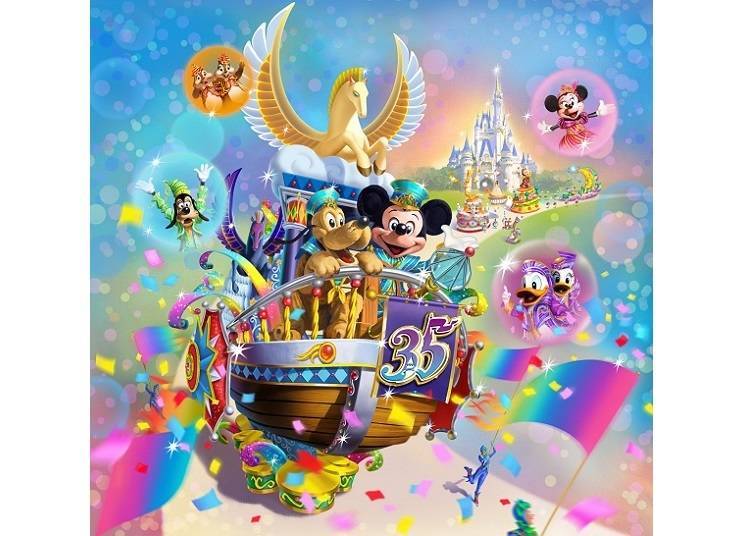 Kicking off the “Tokyo Disney Resort 35th ‘Happiest Celebration!’” is the premiere of this grand daytime parade. Spectacular floats brimming with the colors, dreams and imagination of Disney films will feature characters and images from Fantasia, Beauty and the Beast, Peter Pan and more, including for the first time Big Hero Six. Mickey Mouse and his Disney Friends will take Guests to this world
of dreams.

“Dreaming Up!” will be sponsored by NTT Docomo, Inc.
“Happiness Is Here,” the daytime parade currently presented at Tokyo Disneyland, will end on April 9, 2018. 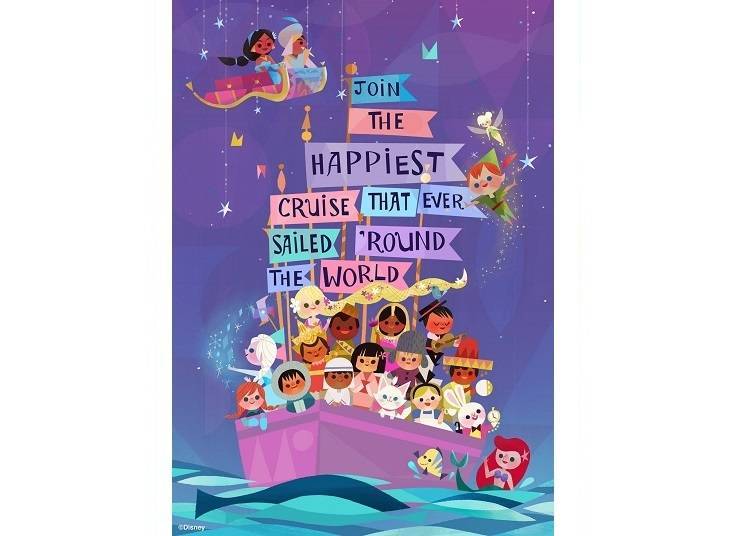 A favorite with Guests of all ages, the newly enhanced
attraction will feature around 40 new figures representing characters from Disney films. The attraction’s iconic soundtrack will be remixed with additional music that evokes memorable scenes from the films. As before, Guests board boats for the “happiest cruise that ever sailed ’round the world” and are welcomed by doll-like children and animals. Elsa, Anna and Olaf from the Disney film Frozen join the cast, together with characters from other Disney films including Alice in Wonderland, Cinderella, Peter Pan, Tangled, Mulan, Aladdin and The Lion King to greet Guests.

“it’s a small world” is sponsored by NTT Nippon Express Co., Ltd. and will offer the Disney FASTPASS service.

Dressed in their special costumes for the 35th Anniversary, Mickey Mouse and other Disney characters, including Duffy and Friends, will greet Guests from on board a special boat on the waters of Mediterranean Harbor. The greeting will take place to the music of the 35th anniversary theme song.

Premiering this summer is this new entertainment presented on a grand scale. The show will feature fountains of water and lights filling the nighttime sky in addition to the colorful images projected onto Cinderella Castle. The show begins with Mickey Mouse appearing on stage and a magical spell that turns the castle into a world of imagination.

Guests will be able to experience various areas of Tokyo Disneyland through images and music.

The Dockside Stage in the New York area of American Waterfront will offer a new show with Mickey Mouse and his pals. Guests will be able to enjoy the ambiance of this themed port through this show which will also feature the 35th Anniversary theme song and other elements during the 35th Anniversary event period.

Performances of “Steps to Shine,” the show currently being presented, will end on March 19, 2018.

A new show featuring Mickey Mouse and his pals will premiere at this open-air theater in Adventureland. Guests and the Disney Friends will share the excitement as lively music plays. During the 35th Anniversary event period, the show will also feature the 35th Anniversary theme song and other elements.

Performances of “Minnie Oh! Minnie,” the show currently being presented, will end on March 19, 2018.

The Grand Finale of this milestone celebration, which ends on March 25, 2019, will immerse Guests at Tokyo Disneyland and Tokyo DisneySea in an ambiance celebrating all the happy feelings generated over the anniversary year. Merchandise exclusive to the Grand Finale will add to the excitement of the 35th Anniversary.

If you're planning to visit Tokyo Disneyland with friends in 2018, you shouldn't miss this chance to celebrate together!