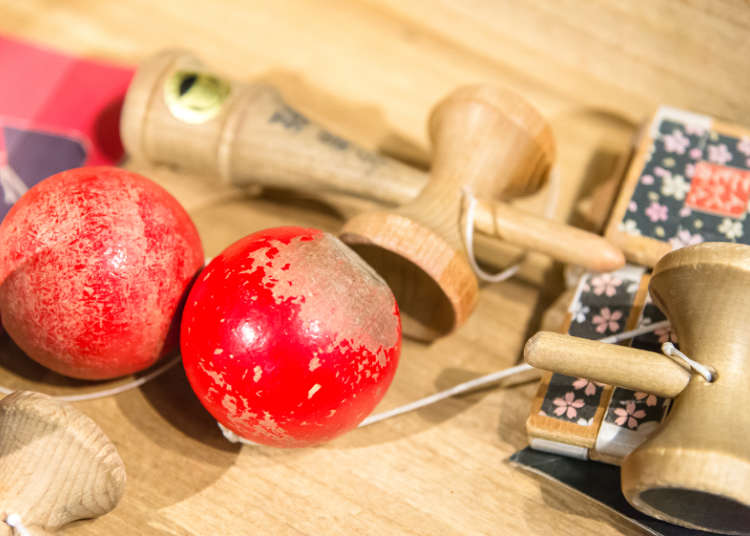 Japan has many traditional toys dating back to the earliest days of its existence. While most of these toys originated in China or elsewhere, each has been modified through the generations to become something uniquely Japanese. 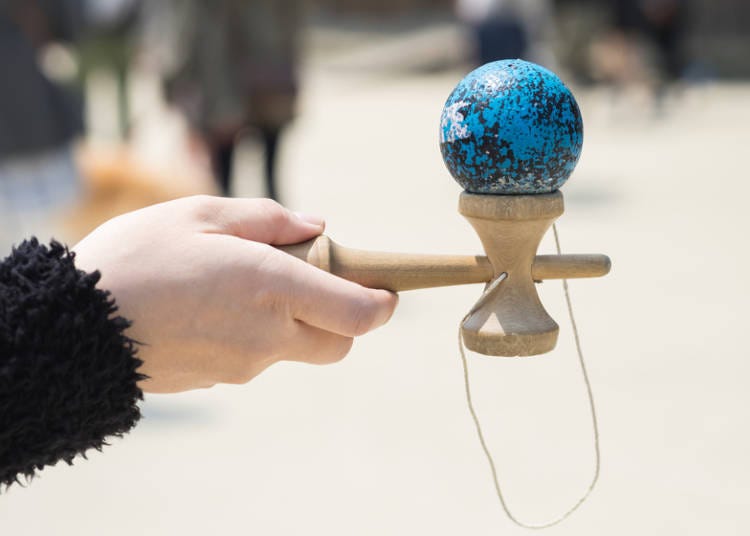 Kendama is a variant of the ball-and-cup game. Believe it or not, the toy first came to Japan in 1777 by way Nagasaki port, and was originally a drinking game. Whoever couldn’t catch the ball in the cup had to take another drink (and we’re sure it became more difficult the longer the game went on)!

The kendama went through several variations before finally settling in its current form--a hammer-shaped toy with cups on both “hammer” ends and a spike at the top. The ball is attached to the toy by a string and has a hole on it to catch it on the spike. The object of the game is to swing the ball up and catch it in one of the cups or on the spike.

National tournaments for kendama are held all over the world, with players performing a dizzying array of tricks to gain top marks. The Japanese Kendama Association uses a karate-like ranking system to identify the skill levels of individual kendama players. 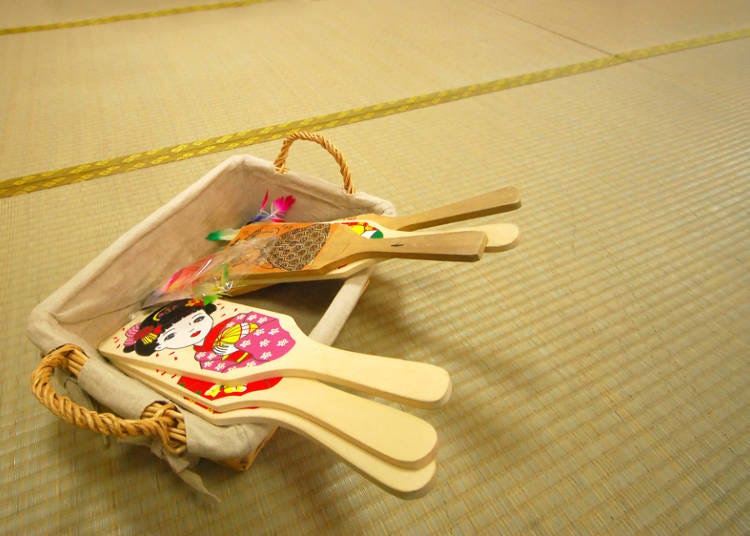 Hagoita, which was originally known as hanetsuki, is like badminton without a net. The players use paddles to hit a feathered shuttlecock back and forth. The paddles, called hagoita (this is where the common name of the game comes from), are usually decorated with the faces of kabuki actors. The object of the game is to keep the ball in the air as long as possible, and the player who let the shuttlecock hit the ground was penalized with a mark on their face drawn in India ink.

The game of hagoita is over 500 years old. The paddles are often collected for their artwork. 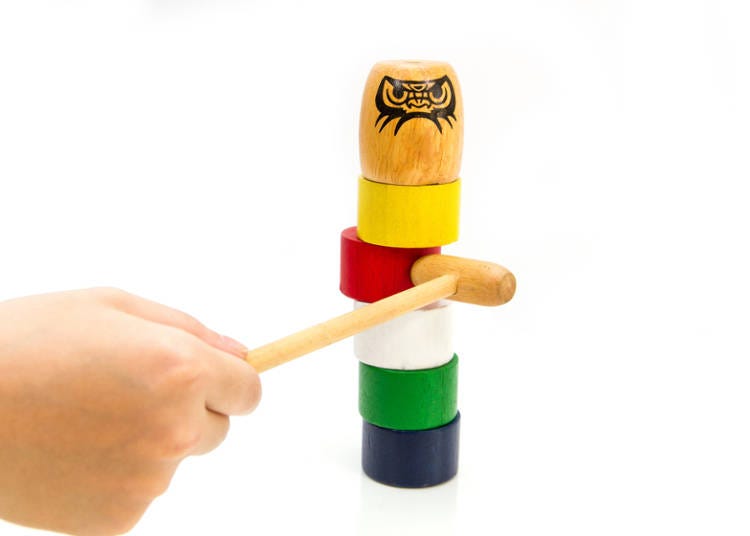 Daruma Otoshi could be considered the Japanese version of Jenga. The game is played with a stack of multi-colored circular blocks topped by an angry-faced wooden doll called a daruma. The object of the game is to use a small hammer to knock the blocks out from underneath the daruma without causing it to fall over.

The daruma traditionally represents the 6th century Buddhist monk Bodhidharma, whose arms and legs atrophied and fell off after he spent nine years continuously meditating. 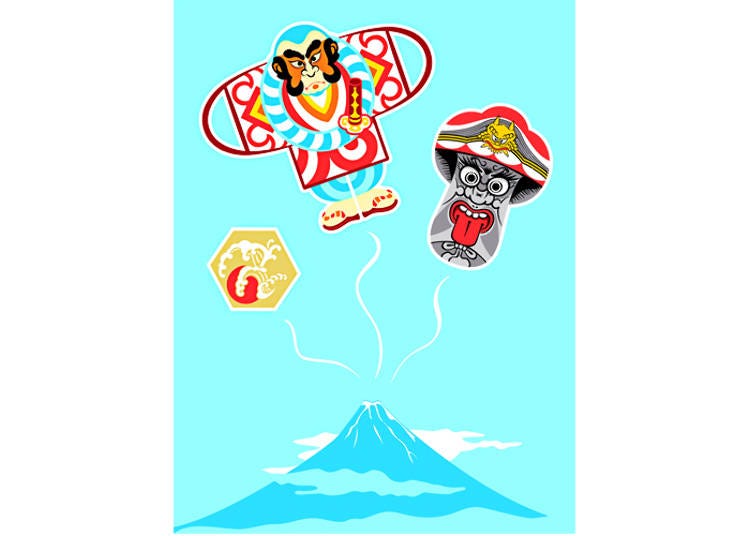 Tako are kites, and are thought to have been introduced to Japan during the Nara period by Buddhist missionaries.

Menko is card game. One player places his card on a hard surface, and the other player throws down his own card. The object of the game is to flip over the opponent’s card either by striking it or using the breeze generated by the throw to blow the card over. If successful, the thrower takes both cards. The winner is the player who has the most cards at the end of the game.

Menko originated during the Edo period. The first cards were cheaply made due to the rough play. Cards are decorated with all kinds of designs, from the Edo period ninja and samurai artwork to modern versions depicting baseball players, anime characters, or video-game monsters. 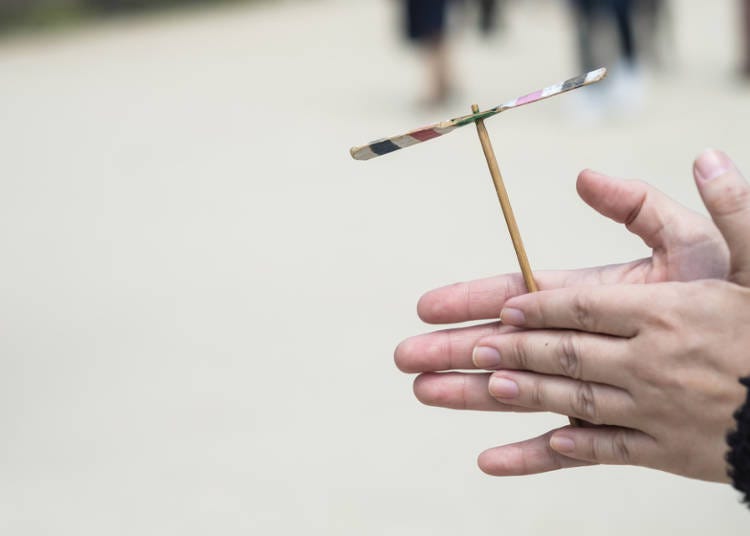 Taketombo, literally “bamboo dragonfly”, is a small stick with a rotor at the top. To play, a person spins the toy between his or her hands and releases it, sending it flying through the air.

Developed in China around 400 B.C., this ancient toy would be the first step towards the science of aeronautics. 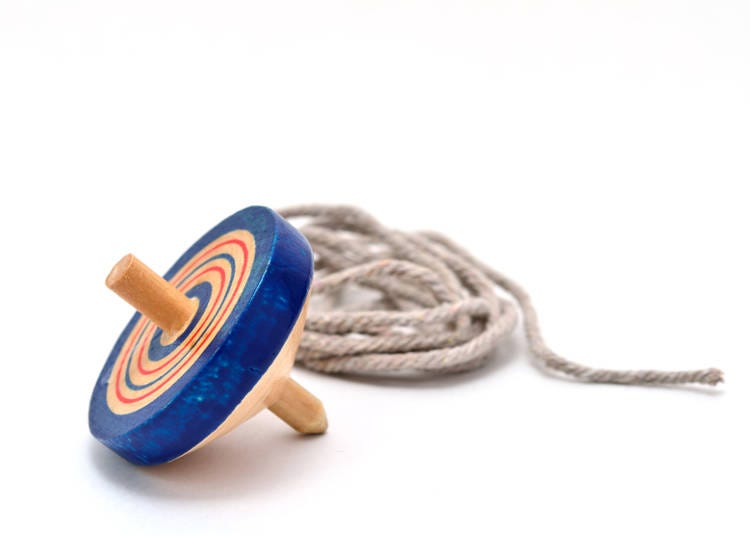 A koma is a spinning top, wrapped tightly with a rope and sent whirling with the flick of the wrist. Koma came from China and were particularly popular during the Edo period.

Of course, little boys quickly developed a fighting game for their koma. Boys would draw a circle in the dirt and pit their fighting tops (now called bei-goma) against each other. The first one to knock the other out of the ring wins!

Does the name bei-goma sounds vaguely familiar when associated with spinning tops? Maybe it does, since koma have evolved with the times. Modern versions now come in many shapes and materials, and even the rules have been updated into games such as Takara Tomy’s Beyblade.