HOME BOSS Coffee: Japan's Best Coffee Comes in a Can?! (But We Tried It Anyway) 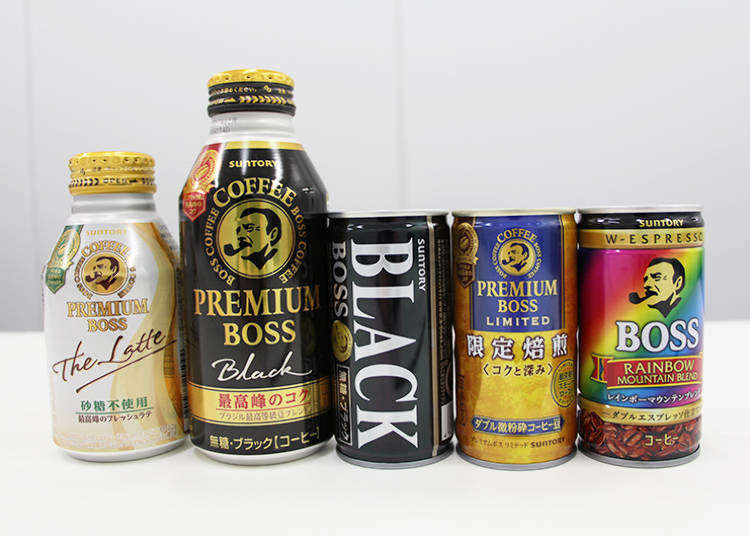 BOSS Coffee: Japan's Best Coffee Comes in a Can?! (But We Tried It Anyway)

Visit Japan and instead of a coffee chain shop, you'll see coffee vending machines on practically every street corner. One of Japan's most popular canned coffee brands is the BOSS coffee series by the Japanese brewer and distiller Suntory.

This series first launched in 1992, and, celebrating its 25th birthday in 2017, has become synonymous with “Japanese canned coffee.”

The brand is also famous for the Hollywood star that appears in its commercials, namely Tommy Lee Jones. Thanks to this, the BOSS canned coffee is also known and appreciated outside of Japan.

This is reason enough for us to put the different varieties of Suntory’s canned coffee to the proof! Our five testers from five different countries gave them each a go. What do they have to say about Japan’s famous canned coffee? Which one will come out on top?

Canned coffee was born in 1950s Japan. With the development of convenience stores and vending machines, canned coffee started to spread to various parts of the world and became especially popular in Asia.

A particularity of Japan is also that vending machines can be found in large numbers and all over a city, not necessarily in the vicinity of a shop or station. You happen upon them on practically every sidewalk! Because of that, canned coffee can be found quite literally in the middle of the street. 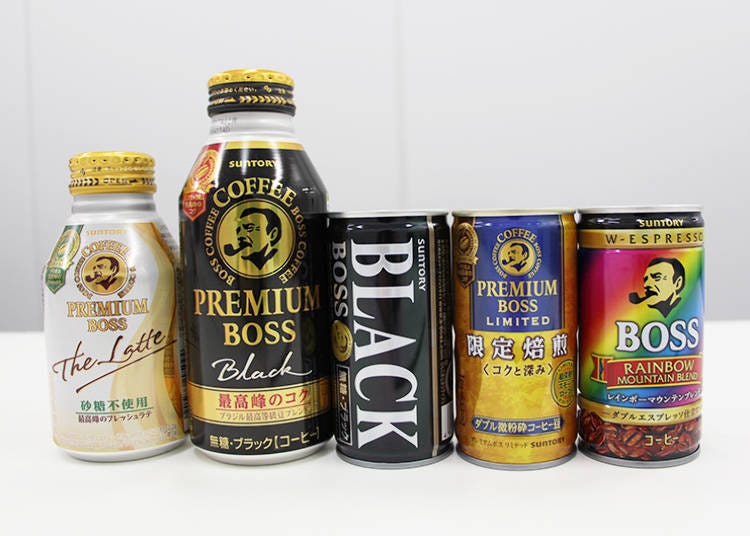 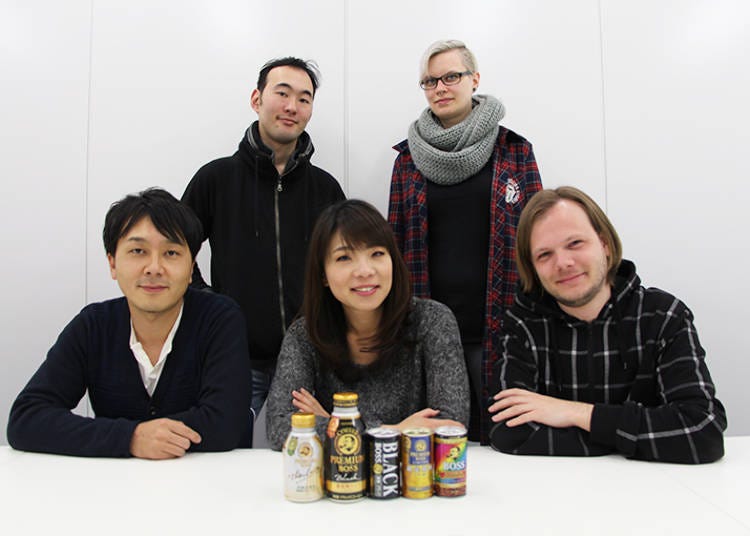 Quentin (bottom right): From the coffee nation of France. He says that in France, people often enjoy an espresso to finish a meal, and he himself is a coffee enthusiast.

Rin (bottom middle): From Taiwan. She loves coffee and enjoys her own dripped brew fairly regularly. Canned coffee not so much, however.

Kim (bottom left): From Korea, a country with many coffee fans. He drinks two to three cups a day, preferring drip and black coffee.

Pamela (top right): From Germany. She loves hot coffee and drinks three to four cups each day. She prefers hers with a drop of milk.

Alex (top left): From America. He needs his coffee both at morning and after lunch, and enjoys a strong brew. 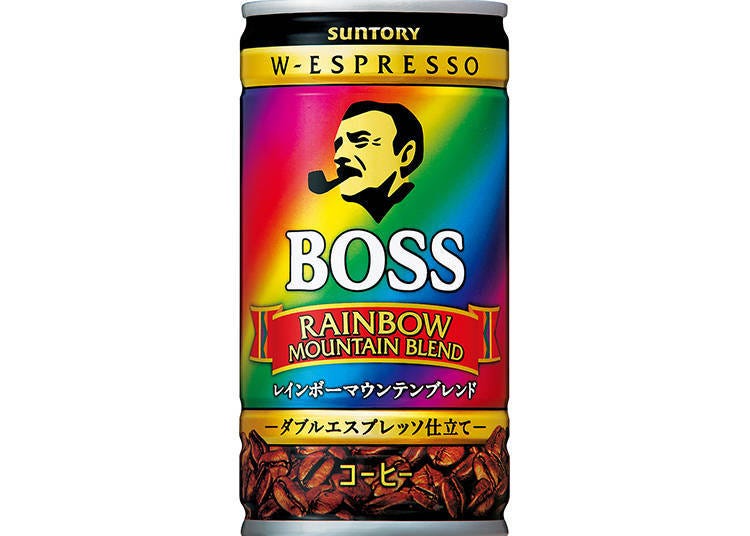 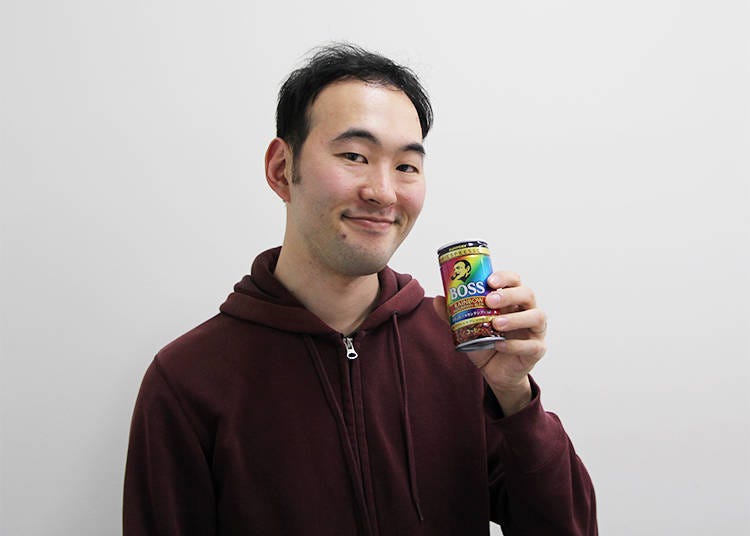 Alex: “For American people, coffee often equals Starbucks. Most folks enjoy their coffee as to-go and as such, coffee certainly belongs to everyday life. Canned coffee, however, does seem unusual to me, which is why I probably hardly ever drink it. This one is very smooth and easy to drink. Compared to the coffee that I usually drink, I think the sweetness is just right.”

Kim: “Sweet coffee is the standard in Korea. The commercially sold coffee types generally contain both milk and sugar. Personally, this one is a bit too sweet for me, but I can imagine enjoying it a lot after a long day of work.”

Hm, the men seem to enjoy the BOSS Rainbow Mountain Blend. Lin and Pamela, however, who don’t like sweet coffee, aren’t too fond of it.

Lin: “Canned coffee is rare in Taiwan. Everyone likes freshly brewed coffee, and so do I. In cafés, coffee with vanilla or caramel flavor is fairly popular, but... mmh... this one is a bit too sweet.”

Pamela: “Well, yeah. The sugary taste is rather strong. To me, this tastes like liquid coffee candy. If you like your coffee sweet, then this might be just right for you, but I wouldn’t recommend it to someone who drinks their coffee black. Germans drink a lot of coffee and many also have their own coffee machines, so they might not become fans of Japanese canned coffee.”

Interesting – as expected, canned coffee seems weird to people from outside of Japan, especially to those who come from countries where fresh brews tend to be the standard. 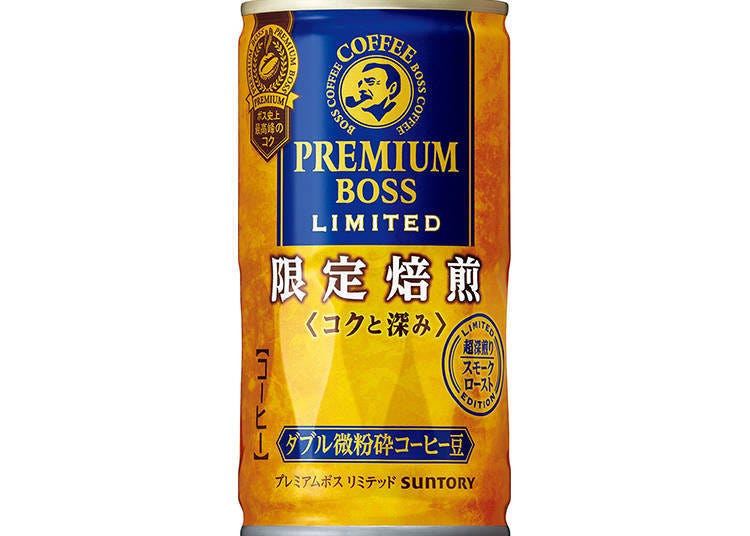 The next one on the list is the Premium BOSS Limited <Koku to Fukami>, which means “deep and rich.” As the name suggests, this is a limited canned coffee with a smoky aroma. Finely ground “super-deep roast smoked” beans are added to the blend, making the coffee taste like a refined cup of coffee richness. The design of the can also hints at a luxurious beverage awaiting inside. So?

Quentin: “This has a smoky flavor, and I like the rich aroma! It’s not too hard and rather refreshing.” 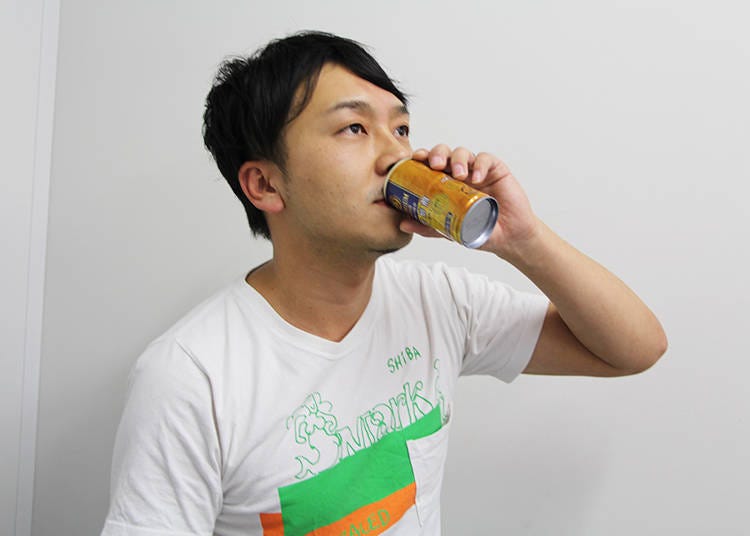 Kim: “Oh, I can smell the roast. That’s a great aroma, it’s hard to believe that this is canned coffee. Korea does have some canned coffees available, but not as abundantly as Japan. People who want to drink coffee usually go to Starbucks. That’s why I’m so surprised that coffee from a vending machine can be that good.”

Apparently, the roasted beans can be both smelled and tasted, and the Premium BOSS Coffee Limited even gets praise from someone who likes drip coffee best! For Alex, the coffee evokes fond memories of home... 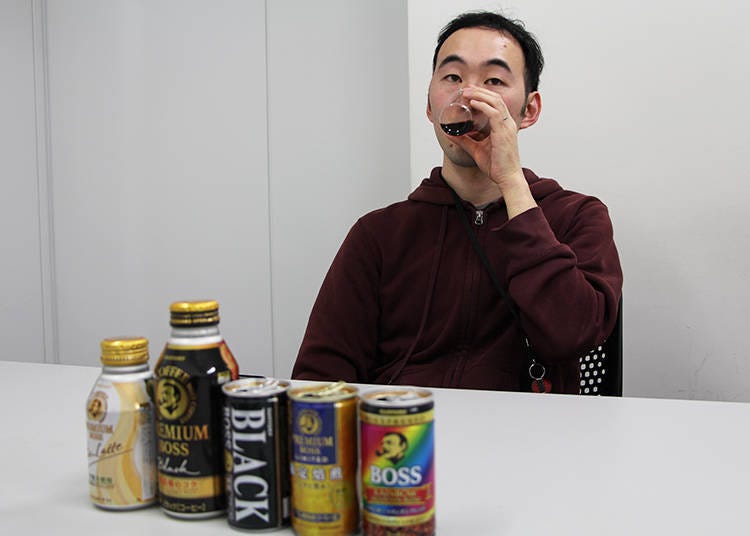 Alex: “There’s a subtle sweetness beyond the bitterness, and it’s more full-bodied than American coffee. Hm, it does remind me a little of the coffee served at a donut shop. Now I’m getting all nostalgic...”

Huh, that is interesting. We'd like to hear more about it, but our testers are eager to try the next canned coffee. 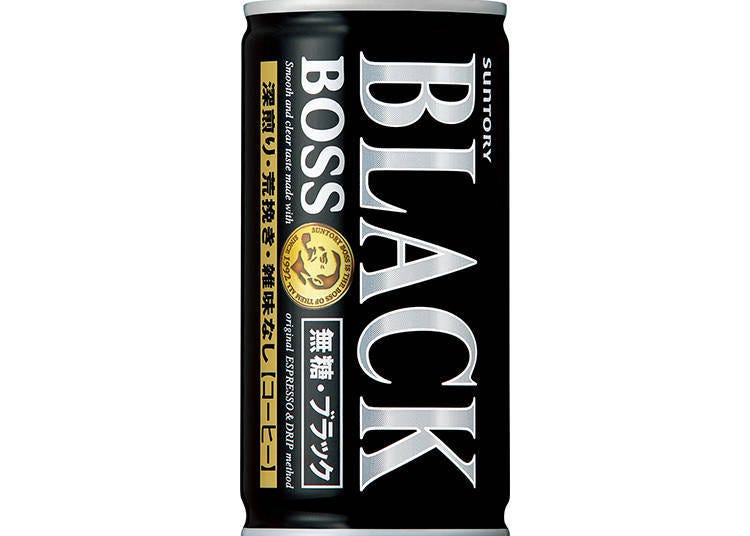 Our next canned coffee, BOSS No-Sugar Black, is very popular among Japanese people who prefer their coffee black – this can represents the concept of “simple is best.” It is characterized by its refreshing aftertaste and since it is plain black coffee, it can be enjoyed for pretty much any occasion.

Alex: “This is very close to American coffee. It’s easy to drink, but it doesn’t have that certain punch of bitterness.”

Pamela: “Personally, I wish this was a bit bitterer. If you like black coffee, it’s a decent choice.”

Those who like their coffee strong seem to think that the BOSS No-Sugar Black lacks in bitterness. Nonetheless, the lack of sugar is appreciated and it may be a great starter drink for everyone who wants to get into black coffee. 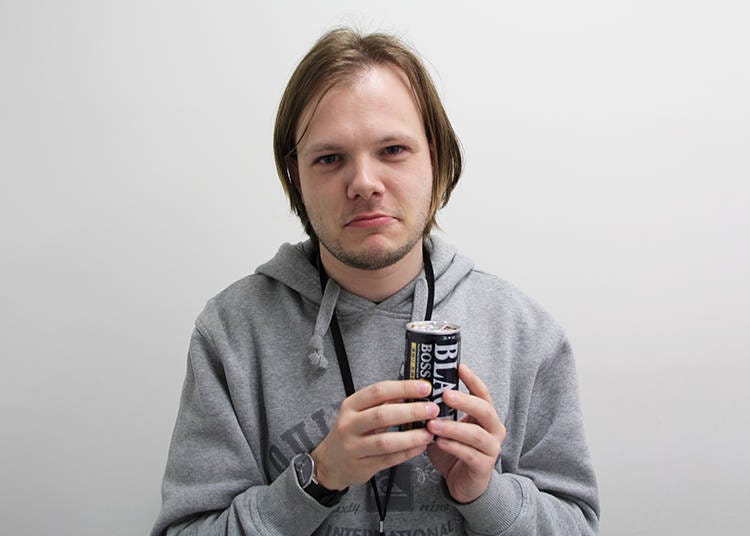 Quentin: “I can’t drink this, this isn’t sweet at all. In France, it is common to drink espresso after a meal, but since I see it as a dolce, an Italian dessert, I tend to put a lot of sugar in it. To be honest, I think it’s hard for French people like me to drink plain black coffee.”

This coffee certainly has Quentin frowning. Maybe our next canned coffee will cheer him up again? 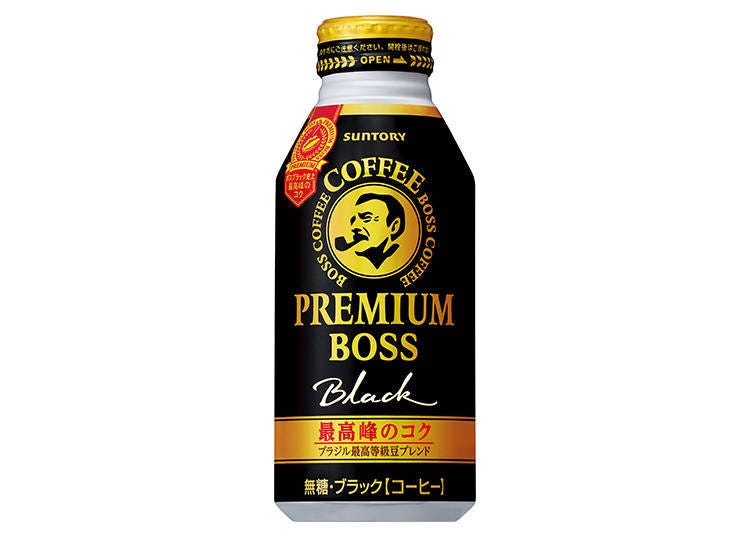 It’s time to try the Premium Boss Black. The last black coffee wasn’t too well received, but this variation promises to be “premium.” It is entirely made with Brazilian coffee beans of the highest grade. The coffee oil extracted from those beans is added to the canned coffee, making it both full-bodied and strong in taste. 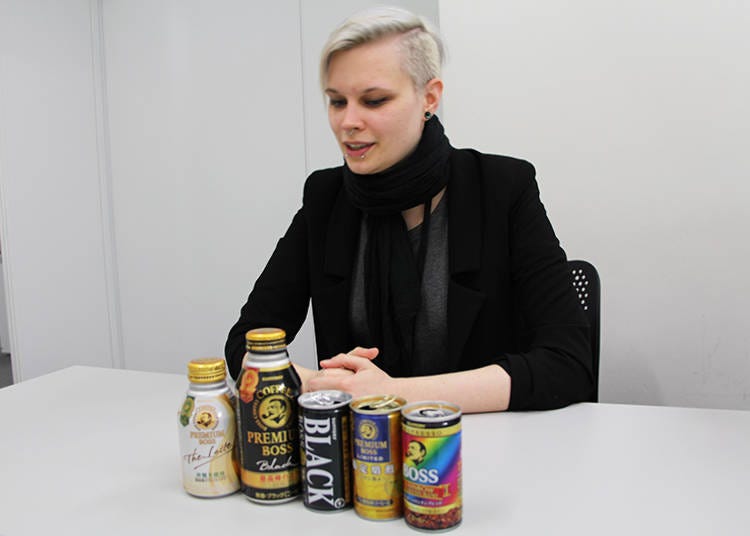 Pamela: “Yeah, this one is much better than the one before. It tastes like proper coffee and has a nice aroma, definitely the best choice for black coffee lovers.”

Lin: “This is delicious! It feels like I am drinking an actual drip coffee. Taiwan’s office ladies always go get their coffee fix in the afternoon, but this canned coffee can be found at any vending machine. That’s very convenient, I like it.”

Oh, the Premium BOSS Black coffee does well with our two female testers who like dark, strong coffee! 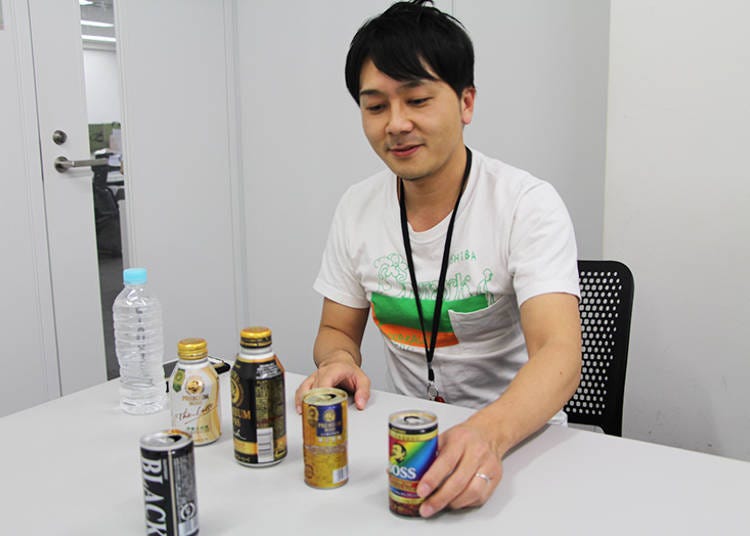 Kim: “It has the bitterness of good coffee, I really like it. It does have a nice, full-bodied taste.”

The men also like the flavor! As Alex mentioned, it seems to be part of the third wave of coffee, a movement that seeks to elevate coffee into the high ranks of gourmet beverages, like wine. People who don’t like strong, black coffee – like Quentin – might have a hard time with it, however. 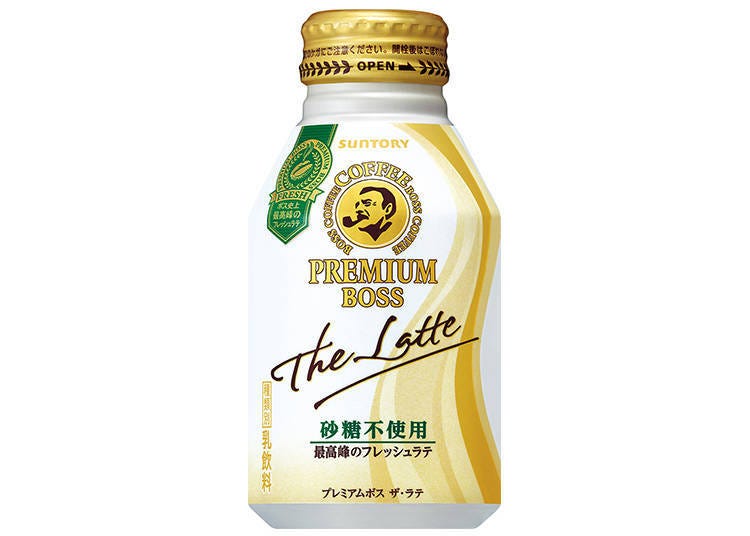 The last thing on our canned coffee testing list is the Premium BOSS The Latte <Sugar-Free>. As far as our arrangement goes, it’s the only latte type that our testers get to drink this time. As this coffee is sugar-free, the original coffee flavor is not muddled at all, but the added milk makes it easier to drink than straight black canned coffees.

Pamela: “This is a nice latte, just the right amount of milk. In Germany, you can find good coffee pretty much everywhere, but this drink comes fairly close.” 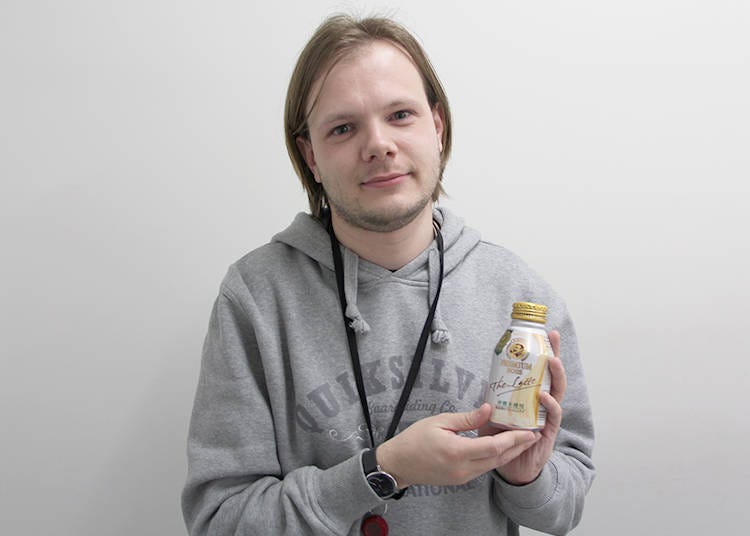 Quentin: “Wow, this is the most delicious one! I like the milk flavor.” 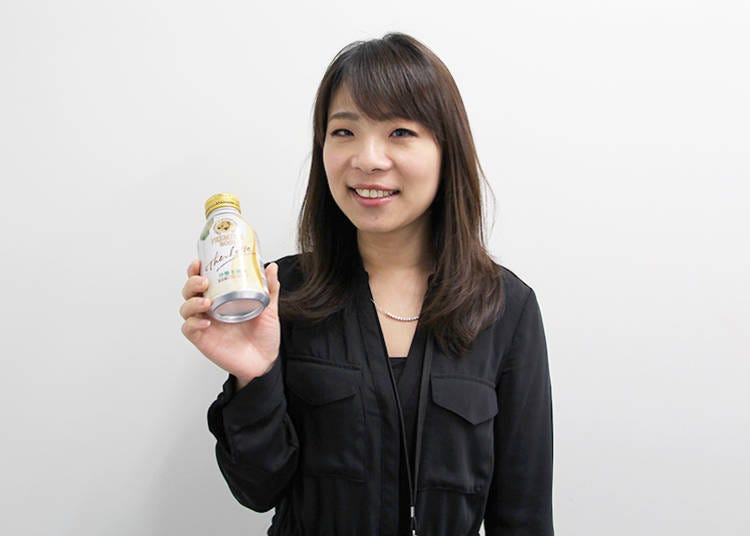 Kim: “I barely drink Latte, but this one is good. It is creamy because of the milk, but since it is sugar-free, the coffee flavor is still very dominant.”

Four people seem to like the Premium BOSS The Latte <Sugar-Free> very much! Alex said “I’d like some sugar in that,” but he did like the milky flavor of this canned coffee.

Which One is the Favorite Canned Coffee of our International Testers?

Well then, let’s look at the results...

The winner is ... Premium BOSS The Latte <Sugar-Free>!

Everyone had their personal opinions about the different Suntory canned coffees and we certainly got to see trends and preferences – and even after the testing ended, the discussion about the dark drink was far from over! The evolution of coffee certainly is amazing, and why don’t you try your way through Japan’s canned coffees as well?