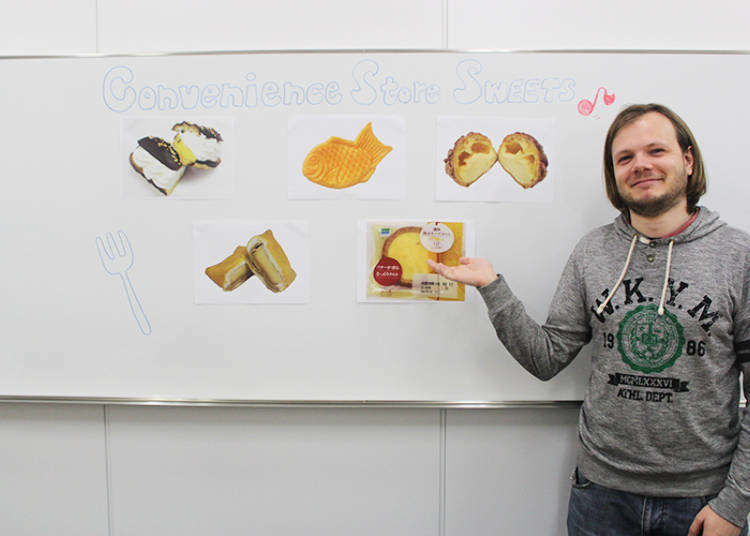 While France is famous as a country of desserts, with patisseries found on many streets which sell all kinds of delicious treats, Japan is fast catching up with its own tasty sweets. In recent years convenience stores have also been stocking cakes and high quality desserts – all at a great low price. 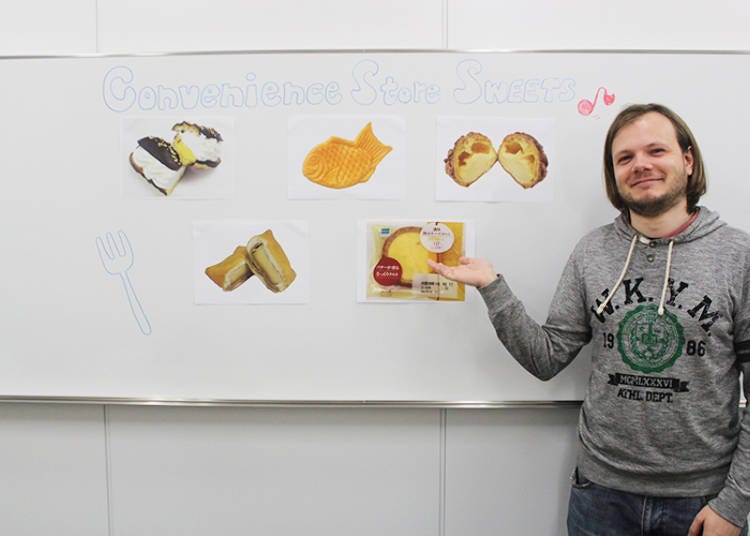 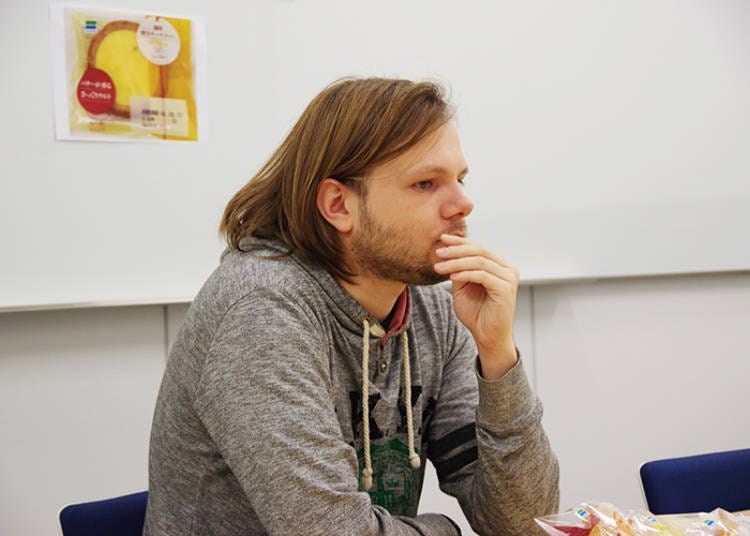 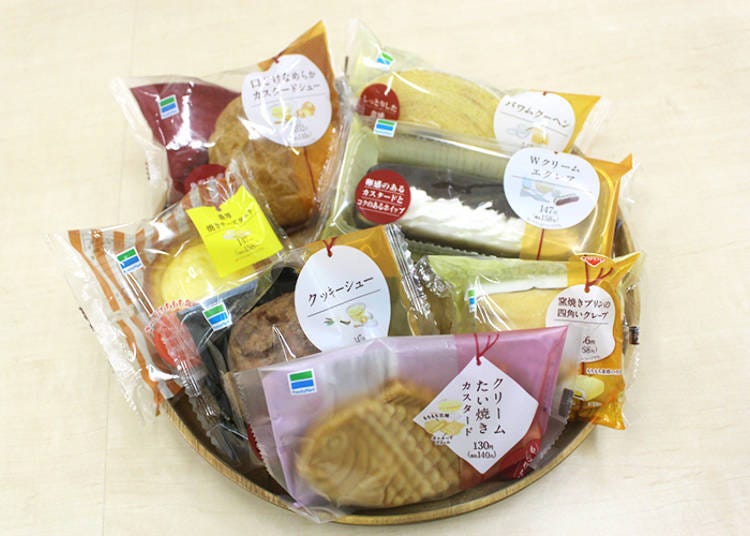 For this tasting test, Family Mart prepared its own self-developed desserts. We asked our subject to try seven types and see what he thinks – let’s see if he finds something that he likes! 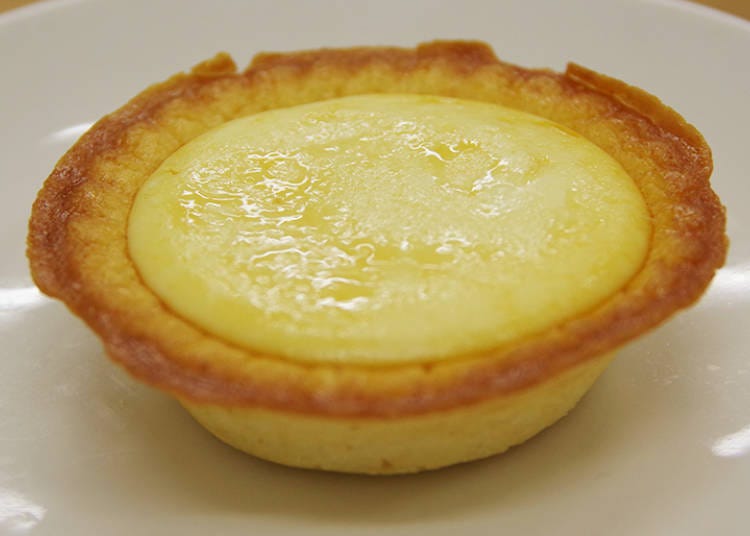 This rich, delicious, tart is made from three kinds of cream cheese from Tokachi, Hokkaido.

Quentin: “I think Japanese desserts look really pretty. Even a convenience store dessert is so pretty”.

It seems like a good start! He already has a high evaluation of the tart’s appearance – but what about the taste? 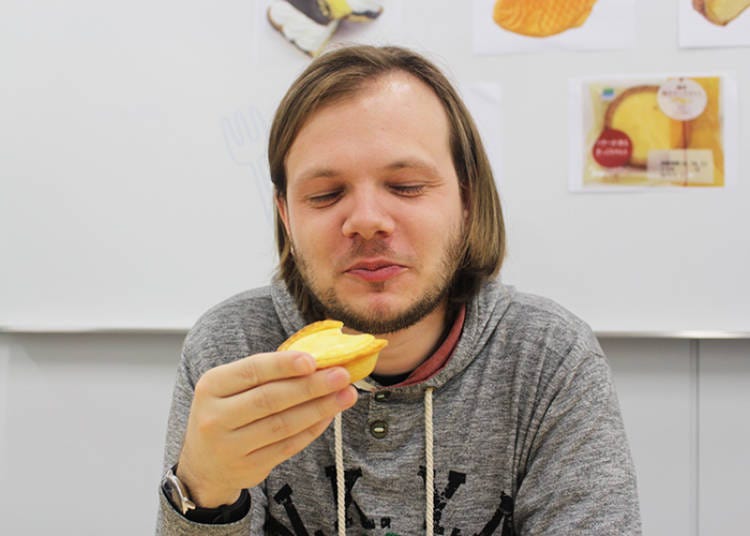 It seems that the taste of this cheese tart is quite different to what Quentin expected.

Quentin: "French tarts are made from fresh fruit or light ingredients, this tart is small, but it's a bit heavy." 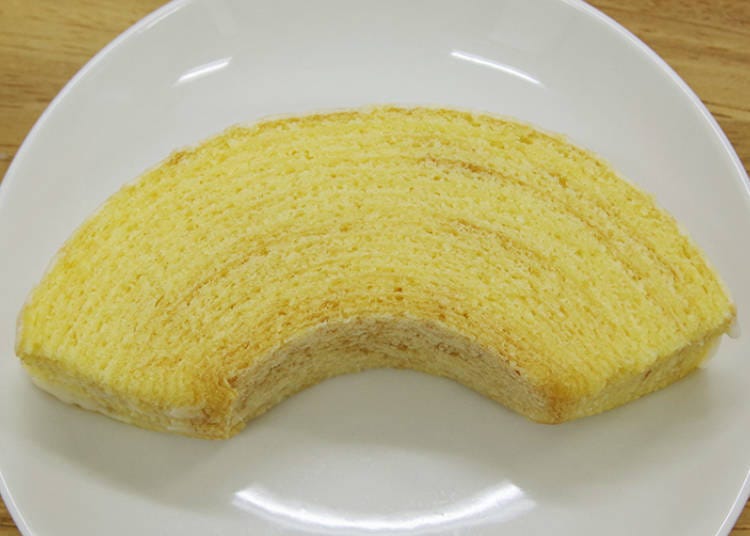 Baumkuchen is an attractive dessert, and one of the most popular in Japan with its moist texture. But, how does it fare with a Frenchman tasting it? 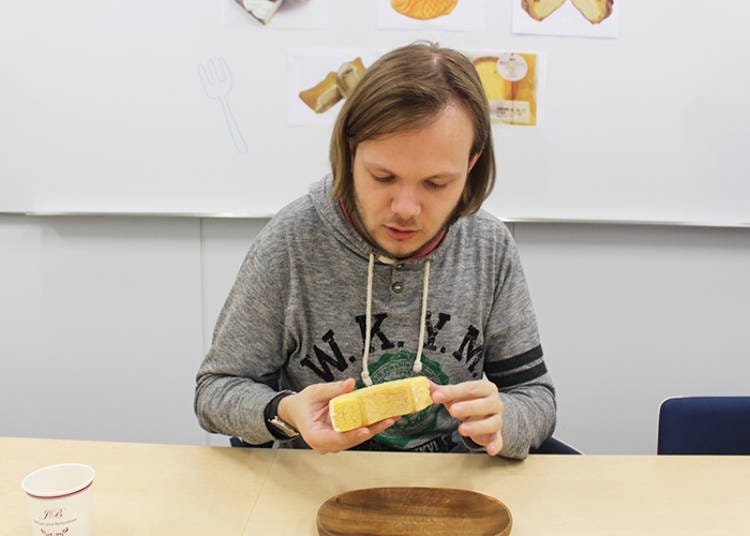 Quentin didn’t know what baumkuchen was, and had never tasted it before! 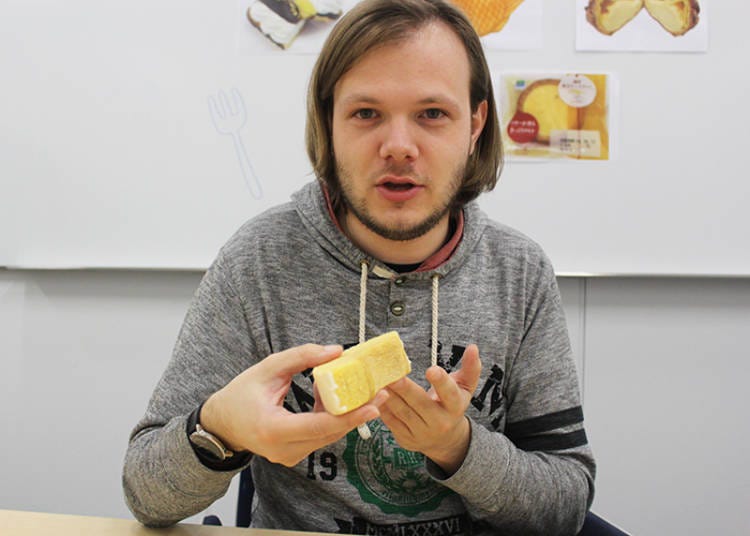 Quentin: "It's delicious! It is simple, but the way it melts in your mouth tastes so great. It’s my first time tasting it, and it’s great”.

Quentin enjoyed his first time eating baumkuchen, but it seems like he would like it to be plainer.

Quentin: “I think there is too much sugar, so it would be better if it didn’t have a sugar coating”.

Although this dessert was delicious for him, it wasn’t quite up to scratch for the Frenchman. 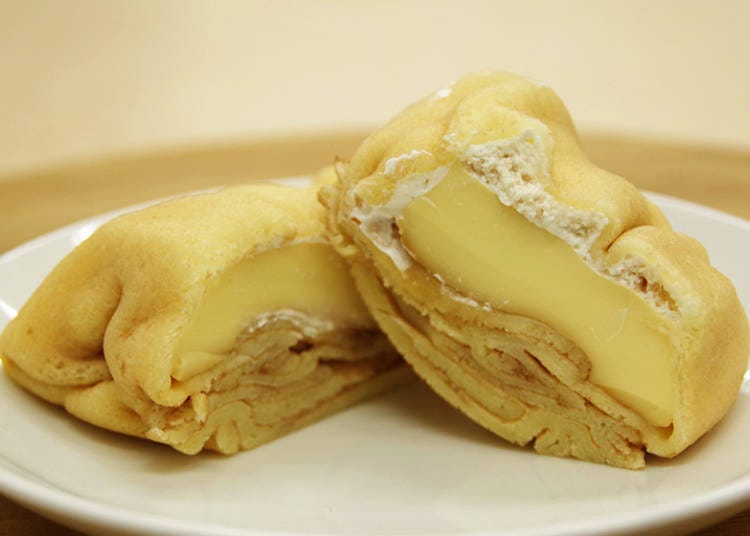 This is a hybrid dessert made with pudding mixed with Hokkaido cream, and wrapped in fine crepe dough! It is bit of a surprising idea to put pudding in a crepe. 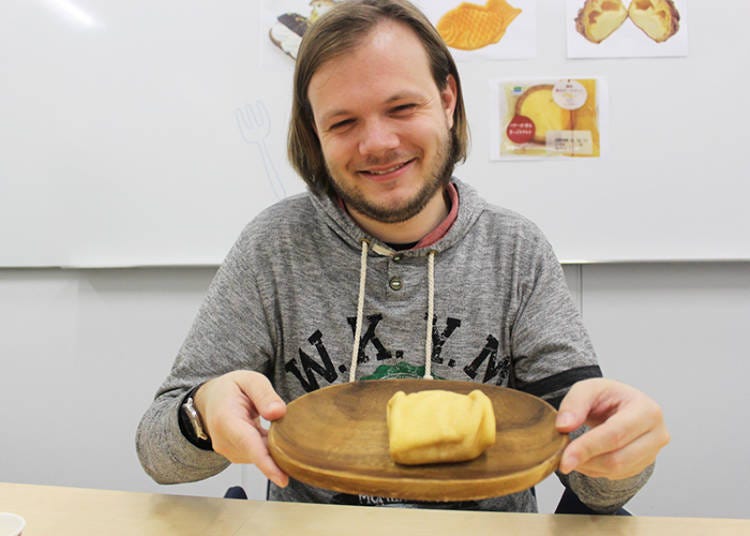 ”I can’t say I am a fan of pudding in itself to be honest,” says Quentin, who laughs when given an explanation about the pudding wrapped with crepe. 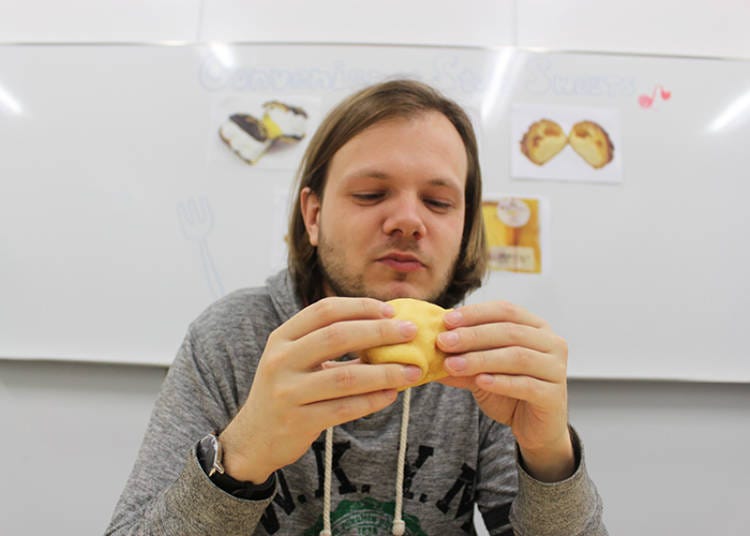 Quentin: “Well, the cream in between is very good, and the crepe dough also tastes very good. I don’t think it's a normal pudding because it seems a bit harder than I expected...but it is delicious”.

Quentin loved the cream; though at first he thought it was a lot of cream! He was impressed by this innovative idea of combining pudding and crepe. 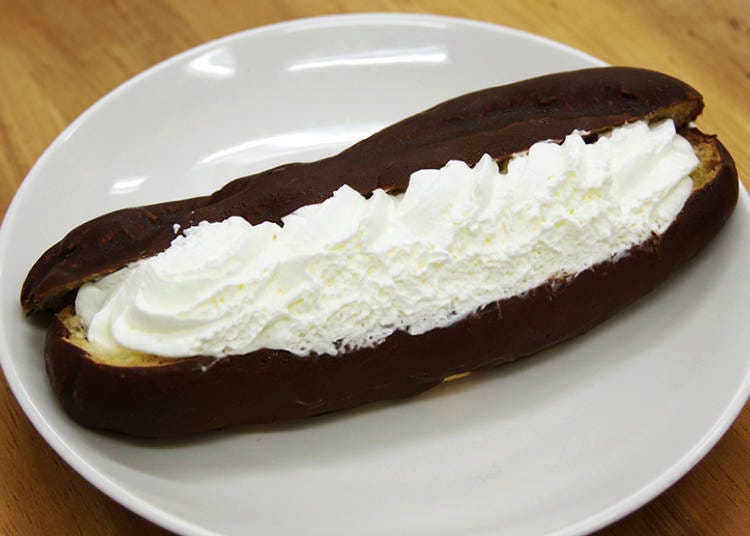 This is a dessert which is adored by people who love sweets that are full of chocolate, such as eclairs.

This is a luxurious pastry filled with two types of cream.

Quentin "I feel Japanese like the letter W ('Double'). Especially, I would say the amount of cream in this is incredible! It's a little hard to eat”. 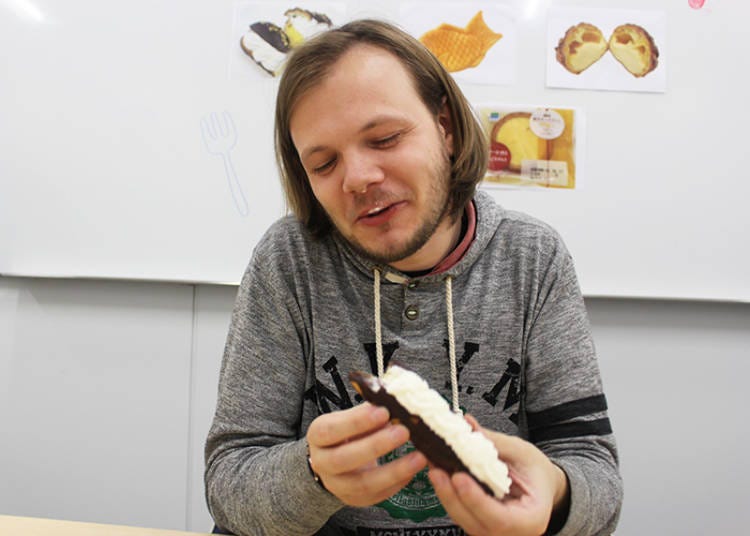 At first Quentin was hesitant to take a big bite of cream, but after one bite his expression changed.

Quentin: “It is quite different from the French original! I think the chocolate and cream match really well. The only thing I would say it that it is a little hard to eat”.

He said it was the best he had ever tasted and highly rated this dessert. It is different to a French éclair, but nonetheless delicious. 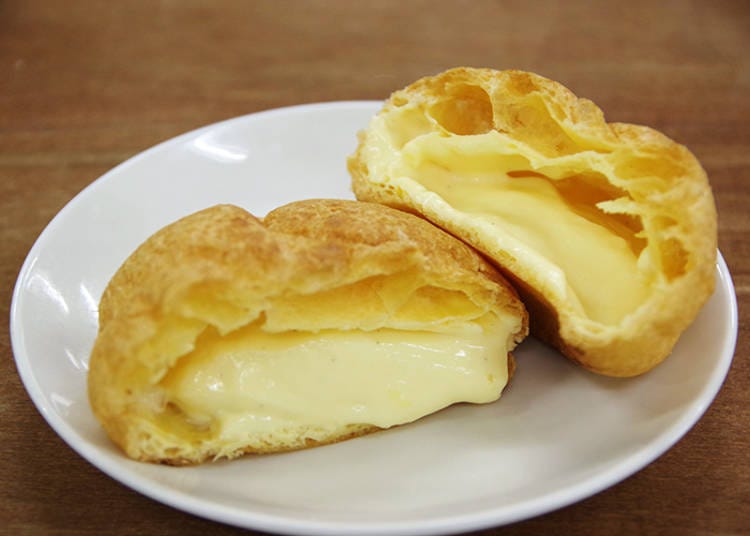 This is a fairly common cream puff; the custard has a melty texture and is made from Hokkaido cream. It has a simple taste, so let’s see what Quentin thinks this time in comparison to other desserts. 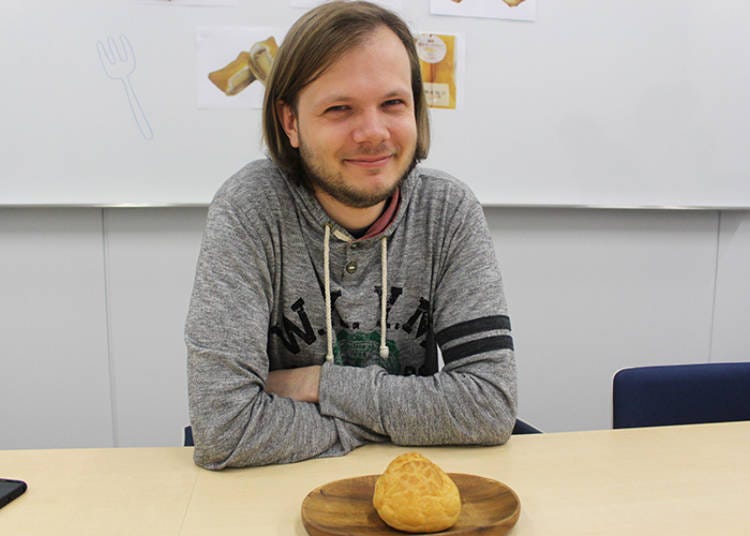 Quentin was quite relaxed and smiling when he saw this dessert, it seems that he often eats it in France.

Quentin: “The Japanese version is really big! In France it is quite small”. 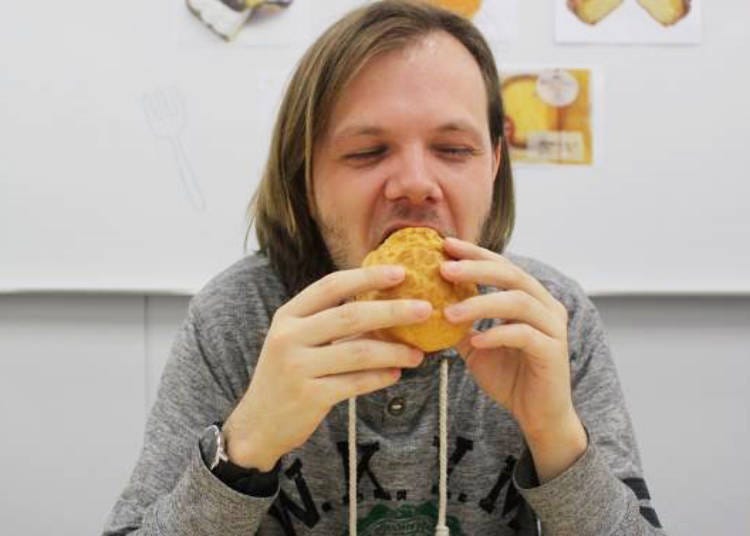 Quentin: “With Japanese custard cream you are pretty much guaranteed a consistent taste!” 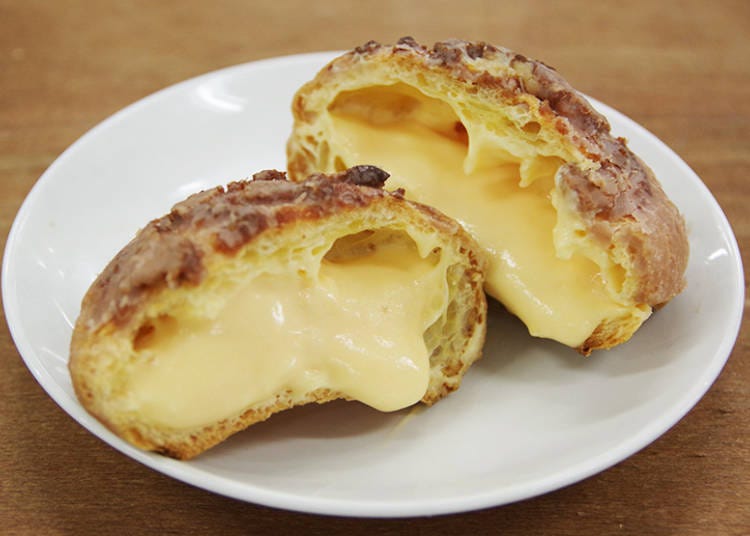 Unlike a basic cream puff, this is a special one coated with sugar and baked with almond cookie dough. Custard cream is also used - blended with Réunion Vanilla extract. 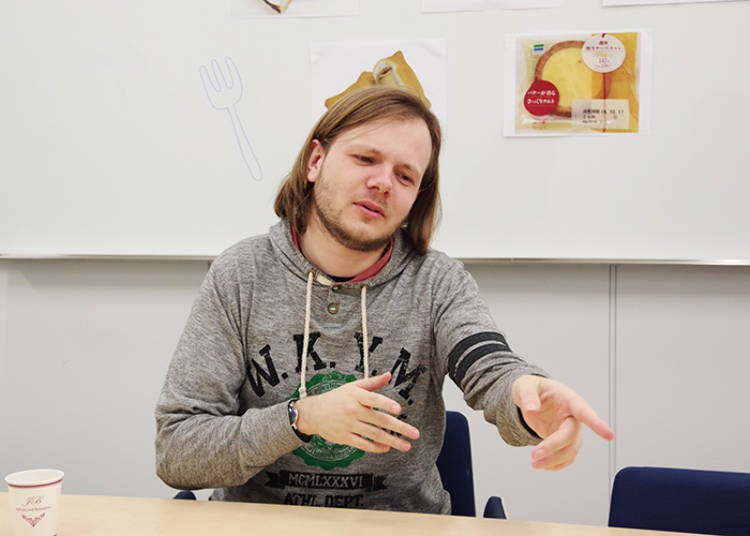 Quentin: “What is Réunion vanilla?”

It seems that he doesn’t know French Réunion Vanilla. It is made from the finest vanilla from the French island of Réunion. 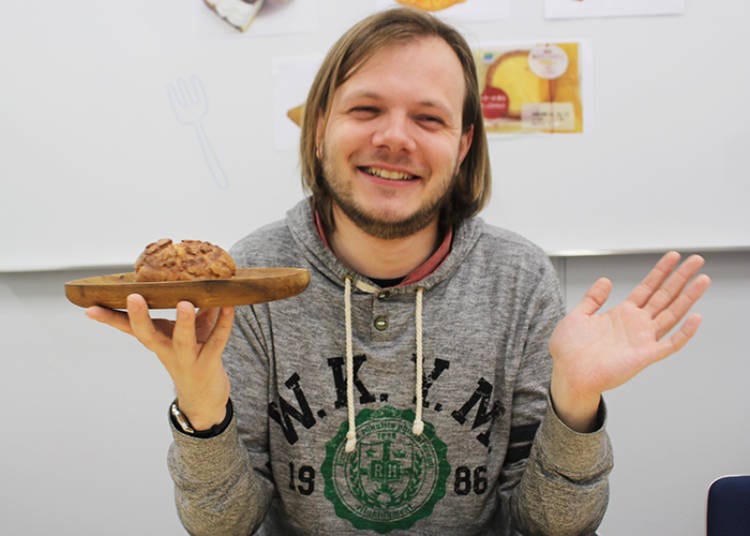 Quentin: “This one...It really has a crust! It also has the power of Réunion vanilla. It’s a little bit different to a cream puff”.

There certainly seems to be a difference in the cream. This dessert also has the unique fragrance of Réunion vanilla, which is quite special. Quentin thinks the cream is pretty great. 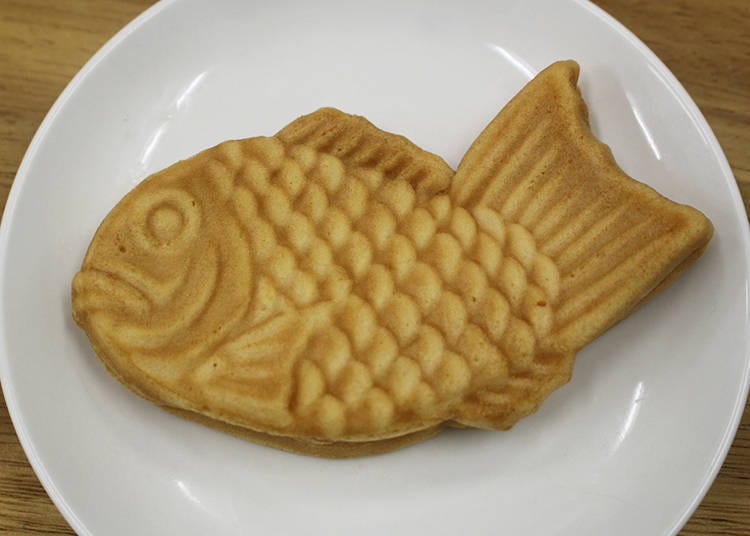 Our final dessert is a traditional Japanese one, taiyaki. This one is full of custard cream.

It is quite popular with foreigners, so we have high expectations for this tasting! 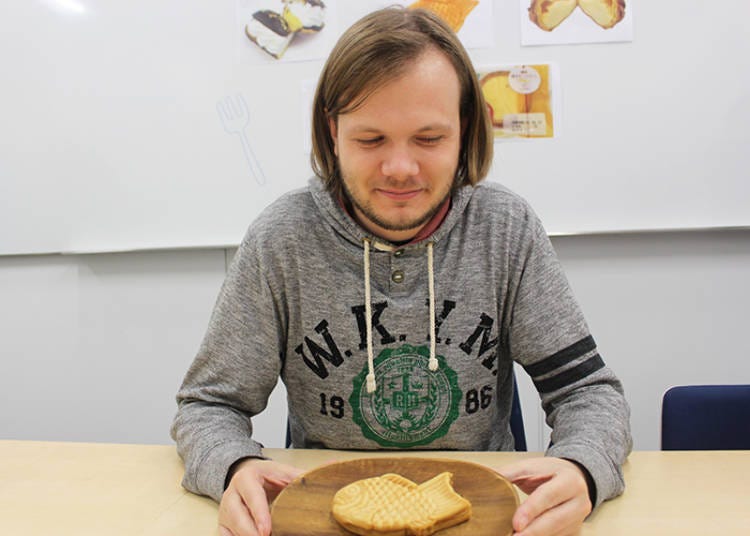 “Actually I don’t like traditional Japanese desserts very much. In particular, I have rarely eaten taiyaki.” 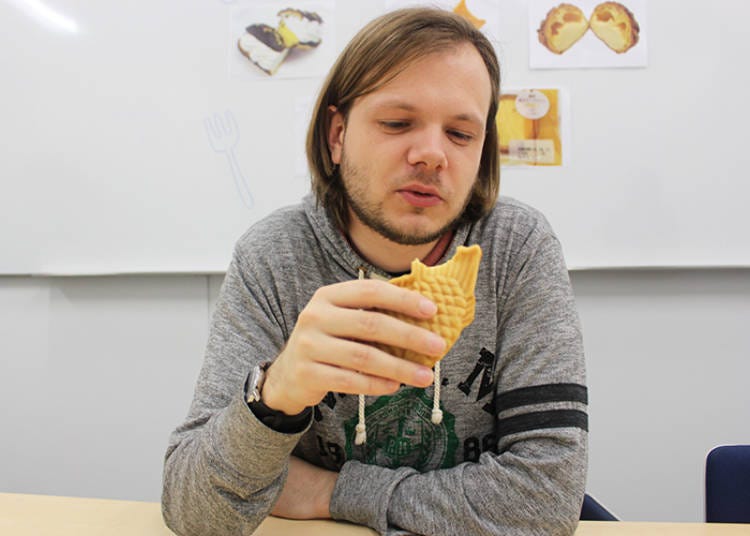 Quentin "Of course I will have a taste... Ahh It is filled with cream, and I like the moderate sweetness of the dough, that’s good. But, I think the texture is too cold.”

In fact, there are surprisingly many foreigners who think the same as Quentin, and aren’t too keen on traditional Japanese sweets. It makes us what he thinks of popular sweets like rice cakes.

Quentin: “I like the texture of rice cakes, but I don’t find them to be very delicious.”

So, what was Quentin’s favorite dessert?! 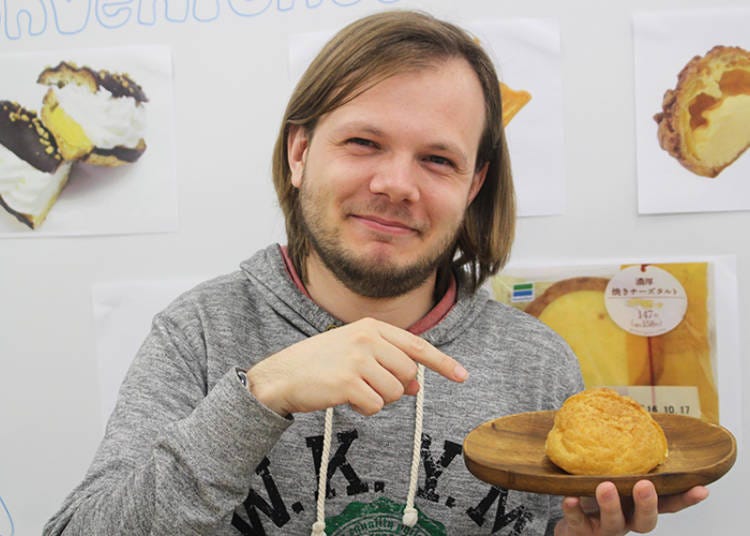 Finally, we asked Quentin to choose his favorite dessert out of the ones he tried today, and the result was the Choux Cream Puff. He loved the consistent taste of the custard cream.

He gave us a few parting remarks on desserts in convenience stores: 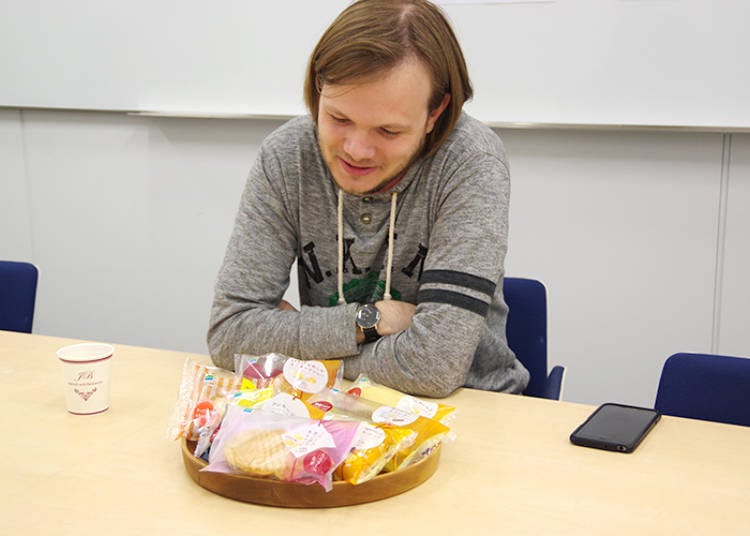 Quentin: “I have been thinking that Japanese desserts are beautiful, but I was surprised that convenience store desserts can have and maintain this kind of quality. I was even more surprised that the quality is comparable to that of a professional dessert shop, although there are differences in taste. Especially, it seems that the simpler the taste, the better it is. I think I'll buy desserts more often when I go to convenience stores in the future!"

7-Eleven, FamilyMart, Lawson: An Insider’s Guide to Japan’s Three Giant Convenience Stores!
*This information is from the time of this article's publication.
*Prices and options mentioned are subject to change.
*Unless stated otherwise, all prices include tax.