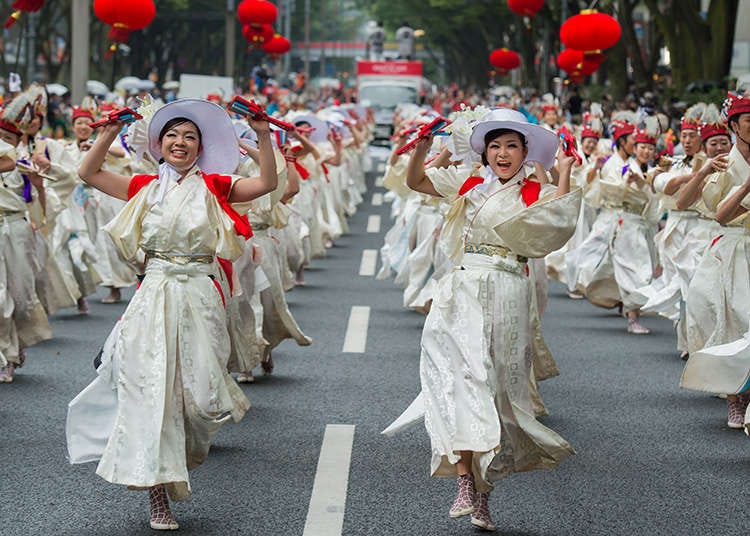 Tokyo Summer Festivals: Dance Away the Heat with Tokyo's Festivals in August! (2019 Edition)

Festivals such as Bon Odori, samba dancing, and yosakoi challenge the summer heat with their energetic performances! Dance away the heat or enjoy these spectacles from the sidelines, sipping a frosty beverage or chowing down on any of the delicious festival foods.

In the scorching heat of Tokyo's summer, these spirited events offer refreshments to Tokyoites and tourists alike! 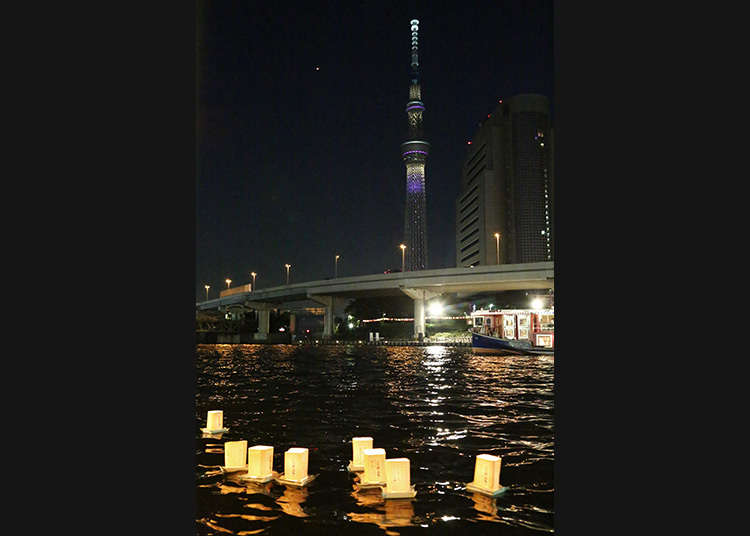 This beautiful festival dates back to the year 1946, when hundreds of paper lanterns were set down on the Sumida River as a memorial to the victims of the Second World War. After that, the Toro Nagashi festival didn't take place for a while during shore protection work on Sumida River but it was revived in 2005. The lanterns travel down the river from the Sumida Park River Terrace, each carrying a thought of the person who set it down. The soft light of the lanterns that glitter on the water's surface creates a warm, almost mysterious atmosphere. Tourists are welcome to take part in the festival and you can register for a lantern yourself on the same day that the festival is held on. 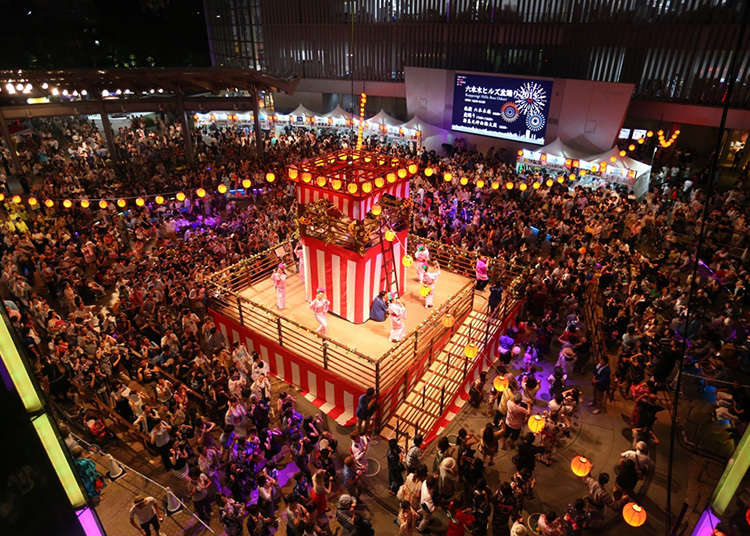 This is a true Roppongi summer tradition: over 55,000 people visited the three-day long festival in 2016. The dance itself is held on the 26th and 27th in the Roppongi Hills Arena and traditionally begins with Roppongi's original song "Ropponjin Ondo", which translates to "the dance of the people of Roppongi". When the people dance around the traditional wooden scaffold to the song's tunes, Roppongi's Obon has officially begun.

During the festival, the shops and restaurants inside Roppongi Hills are also opened, so why not enjoy a delicious gourmet snack in between the dances? There are even special food items to be savored that are available only during Obon. 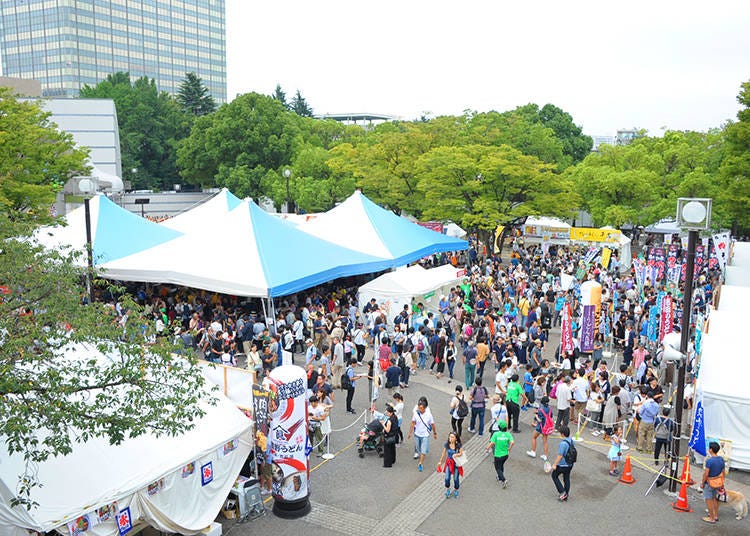 The Koenji Awa-Odori, Festival, held every year on the last weekend of August in Koenji (few minutes from Shinjuku station), with over 10,000 dancers and a million spectators it is one of the liveliest events you can have the chance to see in Tokyo! Thanks to an initiative taken by Suginami City to expand cultural activities to foreign visitors, even in late winter, you have the chance to both see elements from this fabled fest – and even get to learn dance moves! It’s an experience not to be missed.

Discover & Experience Awa-Odori: One of Tokyo’s Most Joyful Festivals 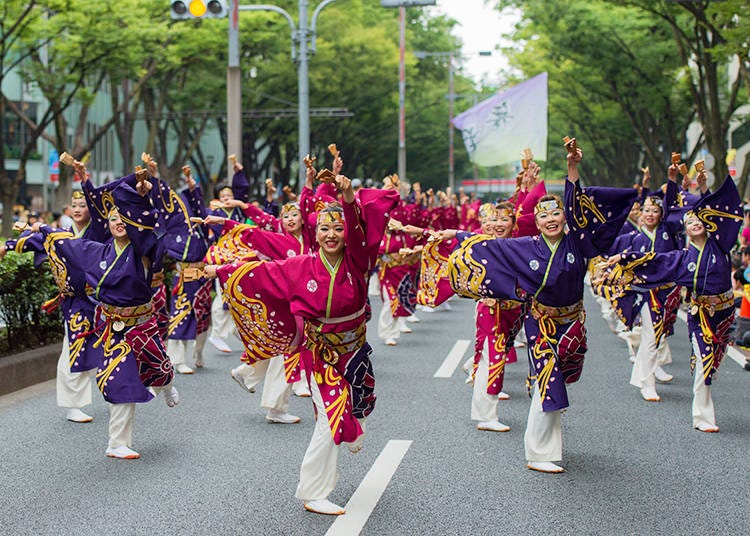 The yosakoi festival was born in Kochi Prefecture in the year of 1954 in the context of projects to revitalize and develop the local economy. Yosakoi makes use of little instruments called naruko that bring sound to the energetic dance of people in colorful outfits. This custom took Japan by storm and today, yosakoi festivals can be enjoyed throughout the entire country. The Harajuku Omotesando Genki Matsuri: Super Yosakoi was first held in 2001 as a shrine festival dedicated to Meiji Shrine. In 2016, 102 teams took part and drew a crowd of about 830,000 spectators. 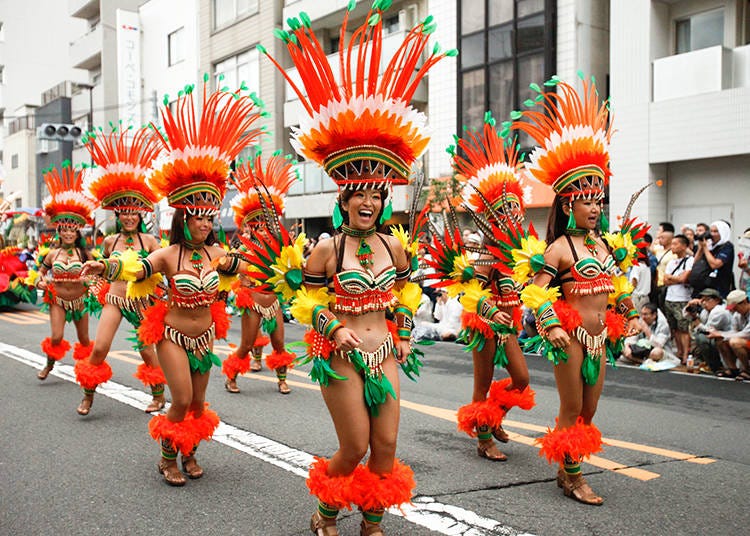 Japan's largest samba parade takes place in Asakusa's summer heat. Ever since its beginnings in 1980, the festival has grown in size and scale every year, leading up to almost half a million visitors in 2015. On this day, samba teams from all over Japan come together, each one of them showing off their costumes and skills under a theme that the teams chose for themselves. The parade starts at 1:30 p.m. 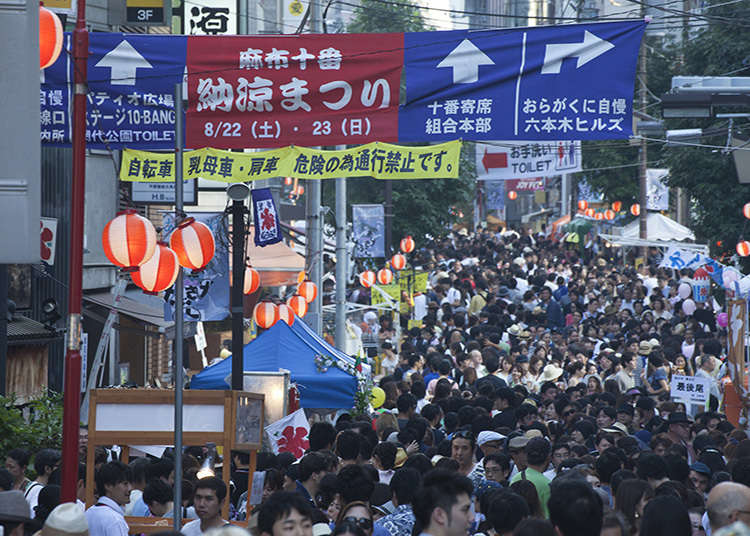 As one of Tokyo's most popular festivals, Azabu-juban Summer Night Festival attracts around half a million visitors every year who enjoy strolling down the street and snacking their way through the night. Azabu-juban is well known as a shopping street of famous luxury and brand stores close to the many embassies. There's also an area called oragakuni jiman which features over 50 cities, towns, and regions from all over Japan offering regional produce and specialties. Taste your way through local dishes, sake, and beer! At a place called Patio Juban is a stage on which dance and music performances are held to entertain the visitors. 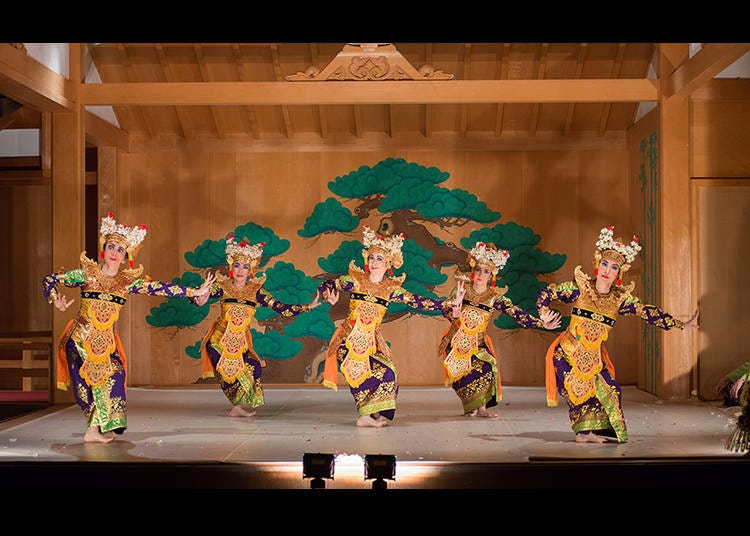 The Asagaya Bali Dance Festival first took place in 2002 and is all about beautiful dance and musical performances from Indonesia’s Bali.
Look forward to a wonderful mixture of traditional and modern Balinese dances, performed by skilled dancers from both Bali and Japan. To give you a taste of local cuisine, various food stalls will tickle your taste buds with specialties of the Indonesian cuisine, Indonesian beer varieties, and more. The festival’s charming atmosphere will make you feel like you’ve been whisked away to the beautiful island of Bali itself! 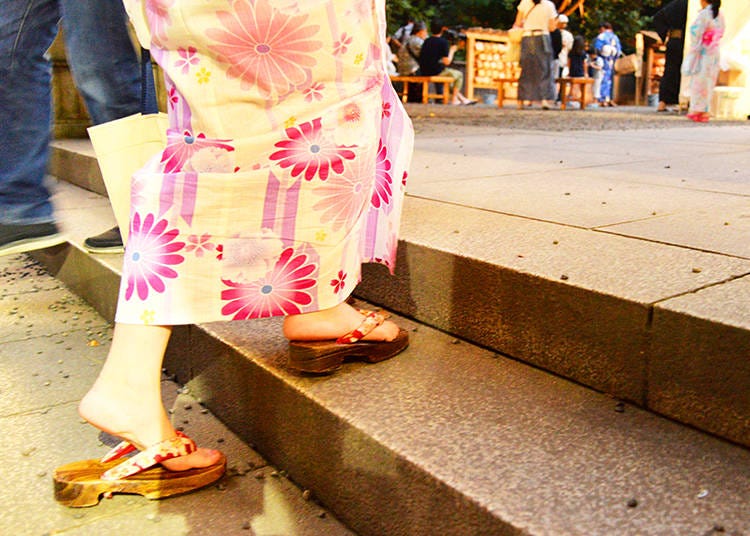 If you’re looking for a summer festival that’ll take you back to older times, look no further than the Nogi Shrine Summer Festival and its amazingly nostalgic atmosphere. Japan’s Showa era is reproduced with authentic costumes and atmospheric lighting, beautifully conveying the charms of the 50s and other decades. Stroll along nostalgic stalls and enjoy classic snacks such as cotton candy or shaved ice called kakigori, while playing the traditional Japanese festival game of “yoto-tsuri.”
Next to the nostalgic atmosphere, various events take place at Nogi Shrine during the festival, Noh plays being only one of them. Make sure to browse the antique market, where you might be able to make an amazing bargain on Japanese antiques!

Nogi Shrine – Discovering Modern-Day Shinto and the Real Last Samurai
*This information is from the time of this article's publication.
*Prices and options mentioned are subject to change.
*Unless stated otherwise, all prices include tax.