HOME Tokyo and Surroundings Tokyo Tokyo Station Tokyo in November: Top 10 Things To Do and See Around the City! 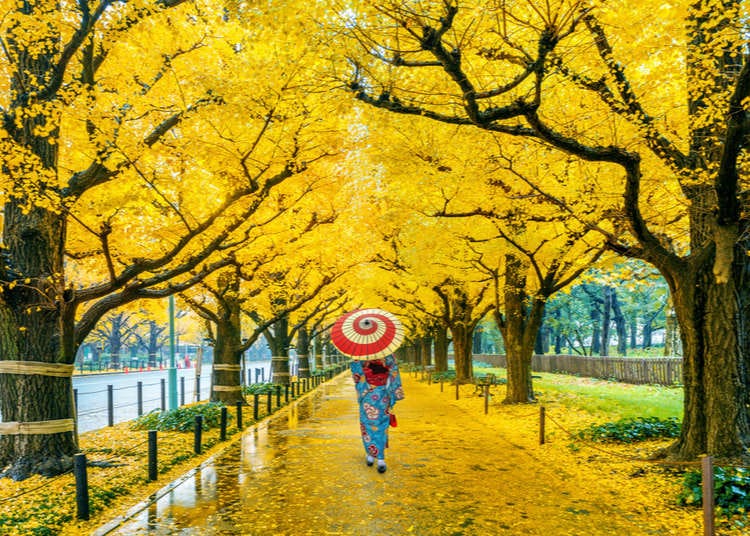 Tokyo in November: Top 10 Things To Do and See Around the City!

November is one of Tokyo’s most popular months for travelers, as the rusty colors of its shifting fall foliage decorate the city’s trees and parklands. Coupled with the temperate climate, autumn cuisine specialties, annual festivals and an illuminating sense that Christmas is just around the corner, November may be one of the best times of year to find yourself the Japanese capital. Here is our list of 10 things you can’t miss in Tokyo in November. 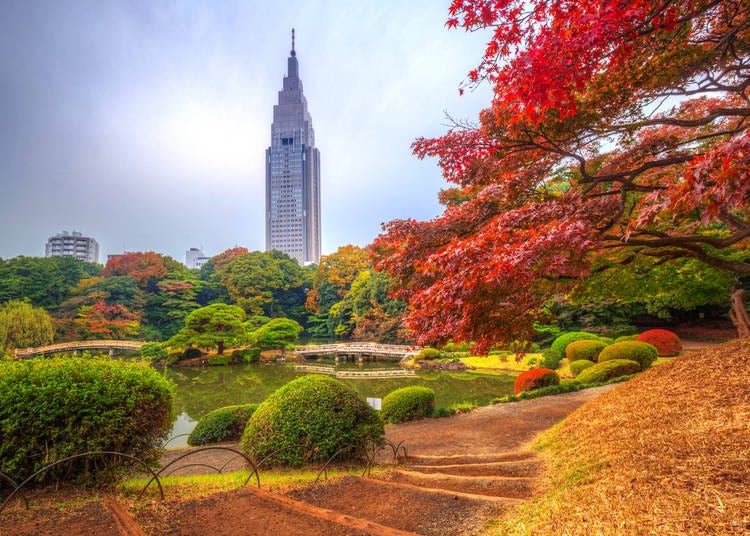 Autumn leaves are known as koyo in Japan

The autumn foliage, or “koyo”, is one of Japan’s most picturesque seasonal phenomena, and the number one draw for travelers to Japan in November. Fiery maple, golden gingko, and orange oak leaves are joined by deep red dogwoods and polychromatic zelkovas. The parks and tree-lined avenues of Tokyo are no stranger to the colors of fall:

Hibiya park, located a stone’s throw from the glamorous Ginza district, is renowned for its striking autumn centerpiece: a 400-plus-year-old tree affectionately termed the ‘risky gingko’.

Ueno Park, famed for its spring cherry blossoms, also takes center stage in fall. The setting, with its idyllic Shinobazu pond, grand shrines and state of the art museums, is a perfect match for the colors introduced by the park’s resident zelkovas every November.

Rikugien Gardens, erected at the behest of a feudal lord at the turn of the 18th century, is one of Tokyo’s finest greenspaces. By day it is a visual delight, but at night in November when the seasonal illumination event lights up the autumn colors, it’s a true sight to behold. 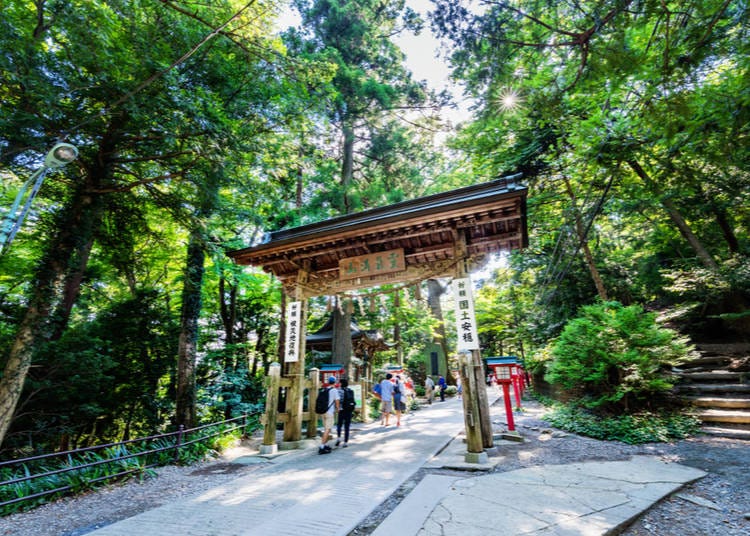 Mount Takao, located about 50 mins west of Shinjuku by express train, is Tokyo’s most popular mountain for amateur hikers. With an elevation of around 600m, several standard trails with incrementally increasing difficulty, and a chair lift, it is very accessible to people of all ages and varying levels of fitness.

In November, many travelers to Tokyo hike Takao to soak up the breathtaking foliage on the ascent. Alternatively you can take the chair lift and snap picks of the innumerable species of tree from the comfort of your seat. However, the nice weather in November typically lends itself to the brisk walk that is climbing Mount Takao. 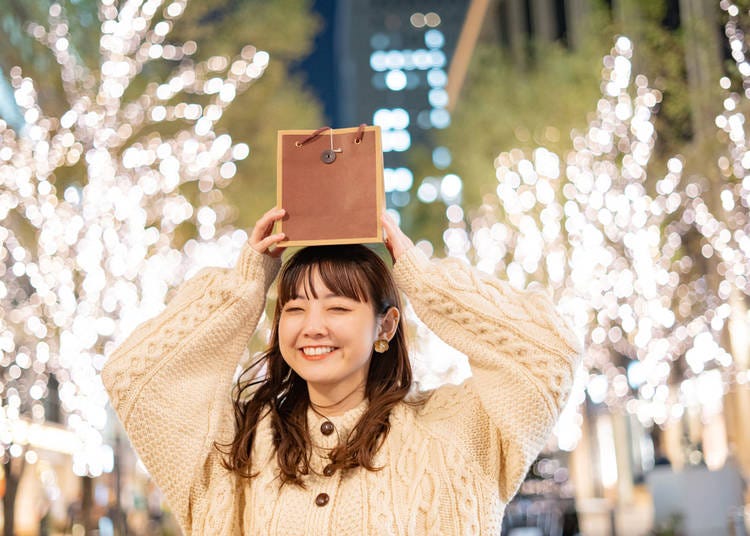 Tokyo is one of Asia’s apparel retail capitals, so you can bet shops get in on the action with competitive seasonal catalogues. As November in Tokyo rolls around, winter clothes start to populate the shelves of Tokyo’s department stores, flagship brand shops, and thrift districts.

Omote Sando, Ginza and Shibuya are among the top neighborhoods for pop fashion brand clothing, with a host of options from mid-range to high-end names. Major department store chains Tokyu, Seibu and Mitsukoshi are always pretty popular. 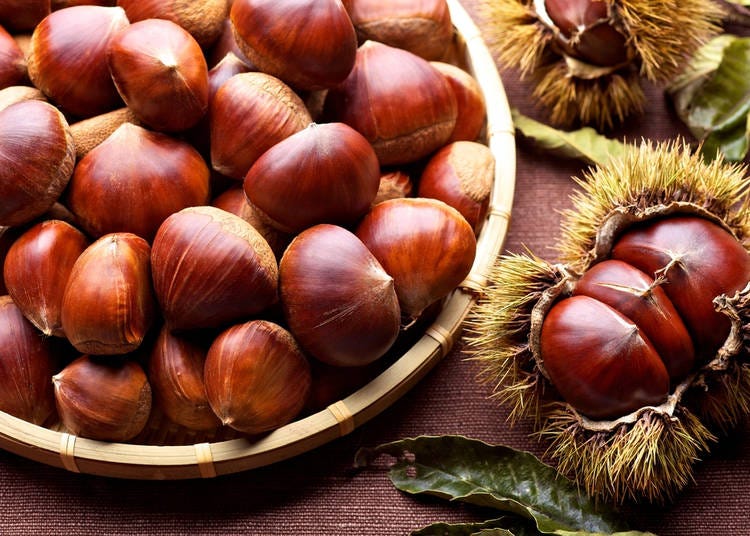 Chestnuts, known as Kuri in Japan, are eaten a lot in November

Every season in Japan is coupled with seasonal cuisine. In fall, fresh fruits, nuts and vegetables expressing the colors of autumn come to the fore.

Chestnuts, or kuri, are a symbol of the season, gaining popularity for their rich and decadent aroma, texture and taste profile. They are eaten with rice in a dish called kuri gohan, by themselves (often sold at street food markets), blended into soup, or are made into wagashi (Japanese sweets).

Japanese sweet potatoes (“satsumaimo”), easily identifiable due to their purple skin also appear on the stalls of street-side vendors in November, or are used for autumn desserts like ice cream and buns. Fruits like persimmon and Asian pear are also at their most delicious in the Japanese fall.

Hot foods such as oden (stewed vegetables) and ramen are used to ward off the cold as the temperature begins to drop. And be sure to sample some astukan (hot sake), with your eveninig meals. 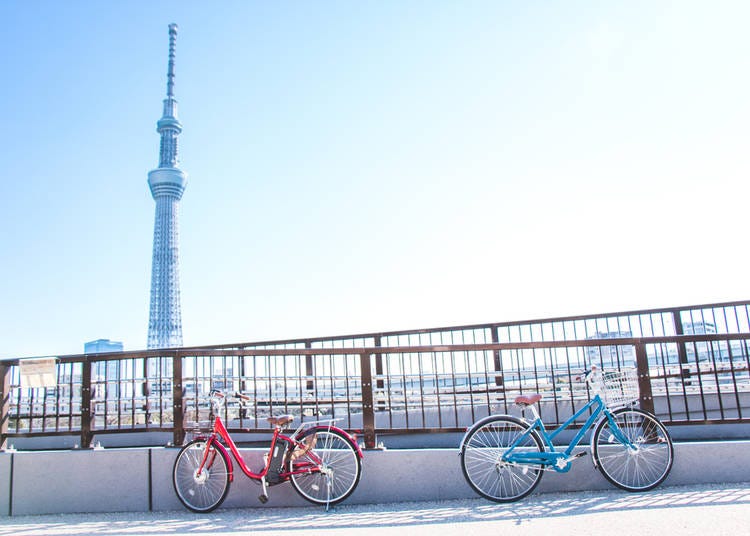 Tokyo is not the greatest city in the world to tackle on foot; it’s simply too big and wasn’t designed to facilitate walking long distances. Cycling however is one of the best ways to navigate chunks of the city, and there’s no better way to do that than with a cycling tour provider.

Eastern Tokyo is the older side of the city, with fewer underground expressways and elevated highways invading cycling routes. This makes it ideal for exploring on two wheels, especially in November, when the daytime temperatures are cool and the fall foliage has begun to brighten up the city’s visage. Several companies offer tours from Asakusa and Sumida to Tsukiji and Hibiya and various districts in between. 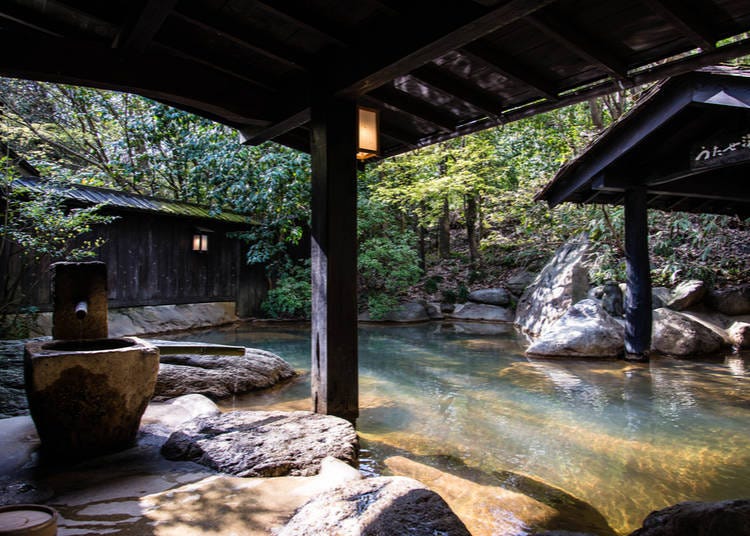 Onsen are a great way to warm up

Hitting up an onsen or sento bath for a steamy soak is a fantastic way to bring your November nights in Tokyo to a close - particularly toward the end of the month as the winter looms near. Onsen water comes from geothermally heated volcanic pools, which is why they are more commonplace in rural regions. Sento however, are (usually) indoor bathhouses with man made pools of heated water.

People don’t usually associate onsen with Tokyo, but Asakusa, Ogikubo and Chofu districts all have onsen facilities. Sento baths are even more popular, as less space and resources are required, so most Tokyo districts will have a local sento bathhouse. 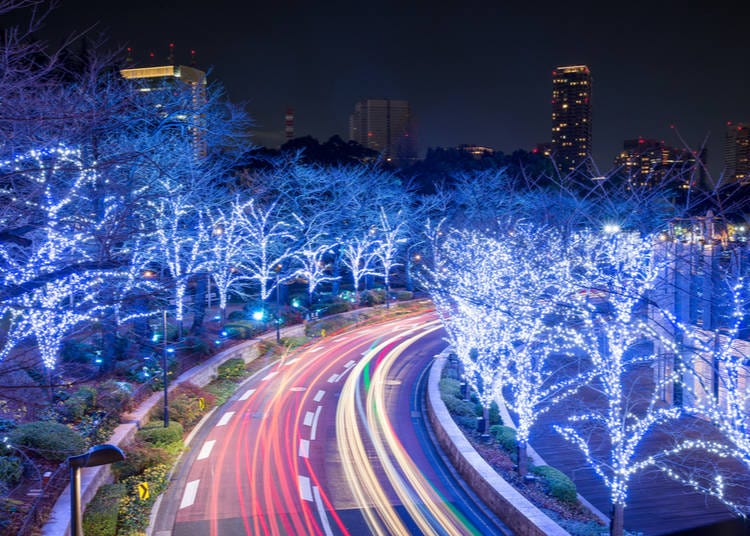 Most of Tokyo’s famous winter illuminations kick off between mid-November and early December. In recent years, illumination events have become a quintessentially Japanese style of celebrating and appreciating their wealth of natural wonders. The winter events, ushering in the early Christmas spirit, may be the most iconic of all.

Tokyo Tower stands at the heart of the city, illuminated in a blazing red, contrasting with the icy colors on the trees to create one of Japan’s great postcard images. But elsewhere you can find dazzling lights illuminating entire streets, pink hues dressing up trees along riverbanks, or even choreographed light shows and fantasy-like scenes throughout the whole of Tokyo. 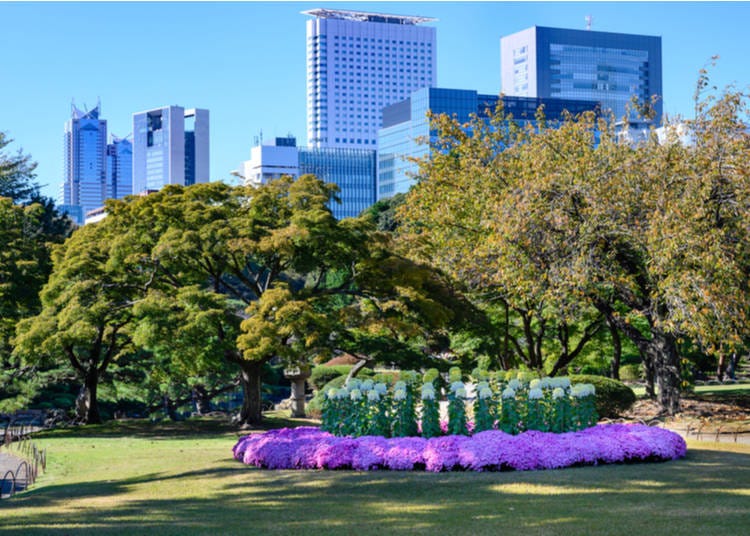 Chrysanthemums are gorgeous in Tokyo in November

Chrysanthemums are revered in Japan above all other flora and plantlife; so much so, that even the imperial throne is named after this autumnal flower. The sixteen-petal variety of chrysanthemum is said to evoke the rays of the sun - another underpinning component of Japanese culture - and its likeness can often be seen on cloth hangings at shrines and temple entranceways. It is the official symbol of the Meiji line of emperors.

You can see this flower in all its splendor every November in Tokyo. Chrysanthemums were strategically planted in many of Tokyo’s public parks, daimyo gardens, and spiritual complexes because of their cultural significance. Festivals that celebrate them also take place across the capital every November. 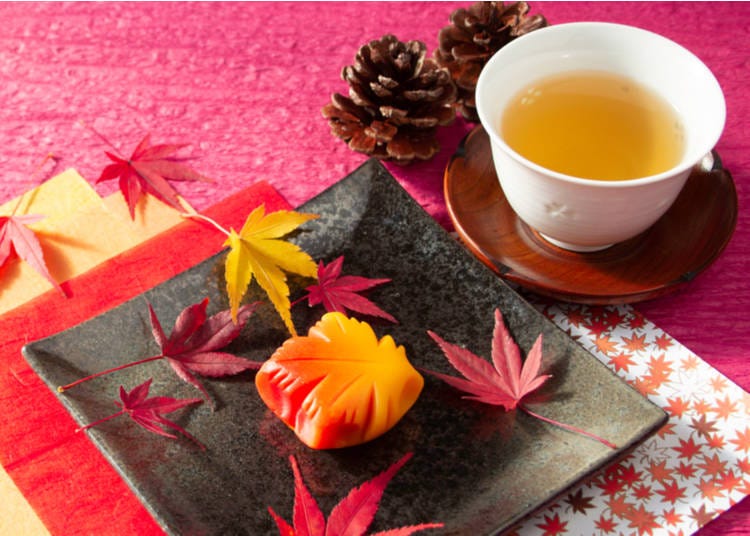 Japan’s globally-renowned culinary expertise spills over into the craft of dessert making, and in autumn there’s a host of seasonal specialties. Kuri dorayaki fuses chestnuts with sweet bean paste inside sweet breads, which can be found in convenience stores. Momiji Manju, maple leaf-shaped buns, are also popular in fall, and come in boxes that make great take-home souvenirs. Kurumi Mochi, walnut rice cakes, are another November top-seller. 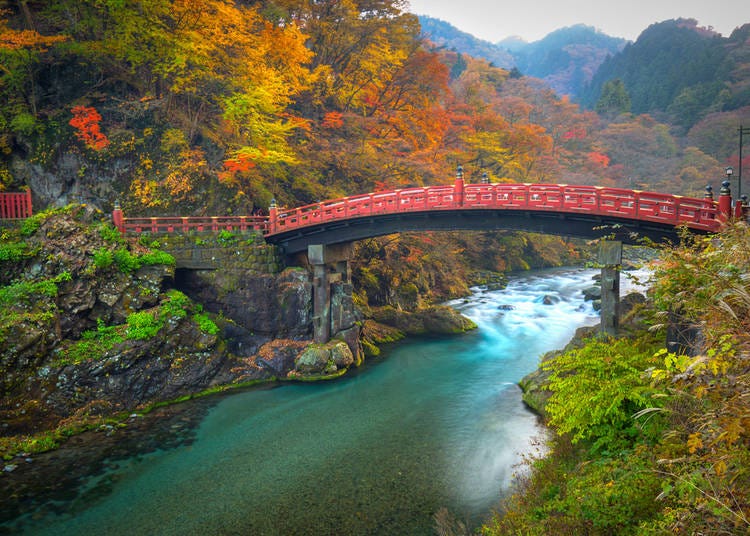 Nikko is known for its beautiful autumn colors

If you’ve got a day to spare in Tokyo, there are numerous day trips and excursions accessible via the capital’s extensive rail network. Nikko, home to the resting place of Japan’s most venerated samurai, Tokugawa Ieyasu, is just 2 hours from Tokyo Station by train. Not only is Nikko a place of spiritual and cultural significance, but it’s also a land teeming with stunning natural reserves.

The misty hills that sweep across Nikko, and the rest of Tochigi Prefecture, are home to primeval forests filled with deciduous trees that shed their leaves in fall. The combination of shrines, temples and fiery autumnal colors make it the best Tokyo day trip in November.

Everything You Need to Know About Nikko!