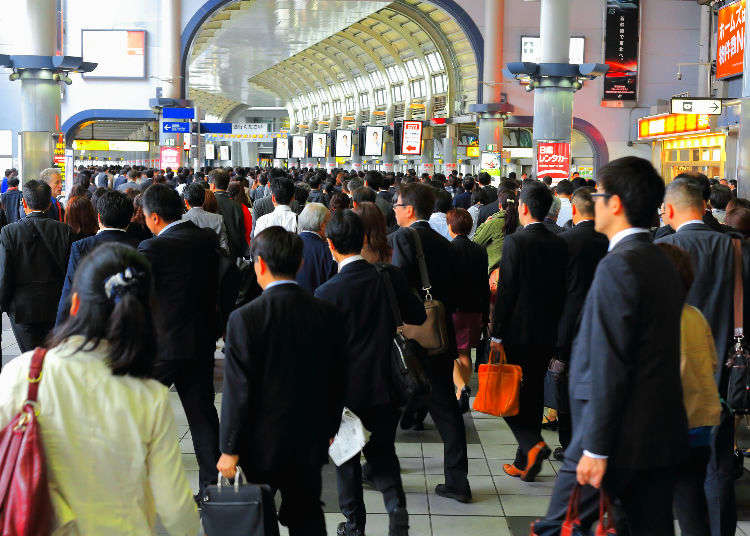 It’s no secret that Japan and the United States are very different, culturally speaking. These differences become especially evident when it comes to working. It starts with the very first step: the job interview.
Both in Japan and the US, companies try to find the candidate that seems to be the most promising one, seems to fit the company best – that much is the same. However, the way of finding the right person for a job is surprisingly contrasting!
To get a closer look at this process and its differences, we asked a man from the United States who started his career at a media business in New York and now works in a Japanese company.

(The following article is based on the interview and opinion of one person and their experiences.)

1) Is This Still Not Over? Japanese Job Interviews Go on for At Least an Hour 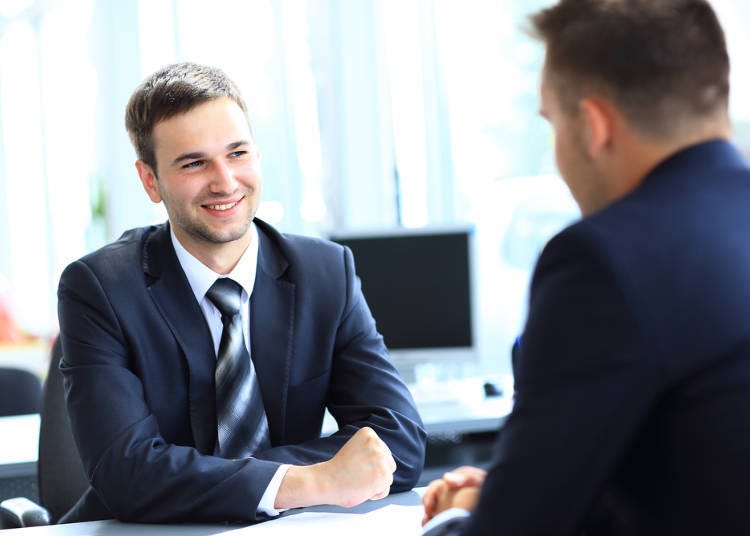 “In America, a job interview is usually over in 10 or 15 minutes. Here in Japan, I found myself sitting in the interview for a full hour, sometimes even an hour and a half.”

In Japan, it is rare for employers to get the spontaneous thought or feeling of “We need this person!” Instead, people opt for a safer option and try to get to know the interviewee as much as possible, which is why the job interview usually lasts for a full hour. On the other hand, an interview that ends early is one of the big scares of Japanese job seekers.

“In the United States, I got the impression that the shorter the interview is, the better are your chances to be recruited. In my case, I landed a job with an interview that went on for only five minutes and I think that isn’t rare. If the interview just goes on and on, you can get the impression that the employer doesn’t really know what to make of you and has a hard time judging you. That’s not a good sign.”

2) Did You Not Check This in Advance...? Japanese Employers Read the Resume During the Interview 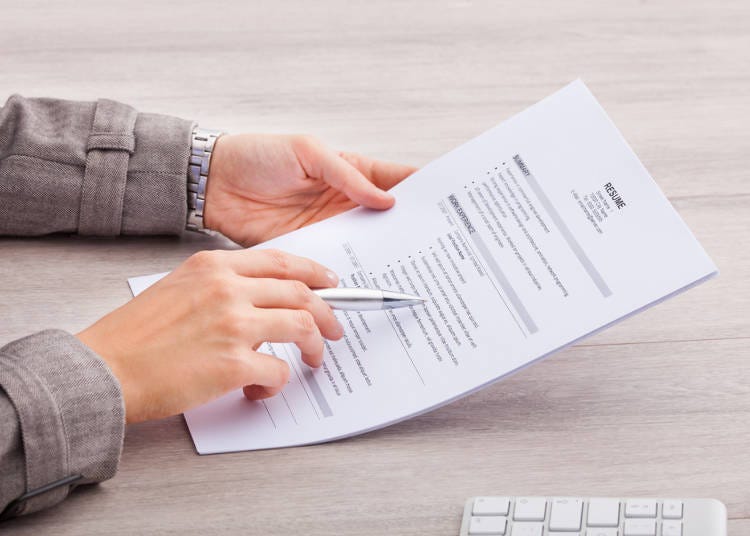 Finding a job starts with sending your resumes to companies that interest you, that’s the same in both Japan and the United States. However, American employers seem to check the resume rather thoroughly before the actual interview. What about Japan?

“I had the strong feeling that the companies didn’t put much research into the people they invited for an interview. On several occasions, I got the impression during an interview that they hadn’t read my resume, at least not thoroughly. I can’t help but feel that inviting a large number of people to job interviews is pretty inefficient. In the United States, I think that a lot of companies put great emphasis on screening and evaluating a person before meeting them, so being invited for an interview means that your chances of landing the job are already fairly high.

3) Why Do You Ask Me About My Hobbies? Personality over Qualification 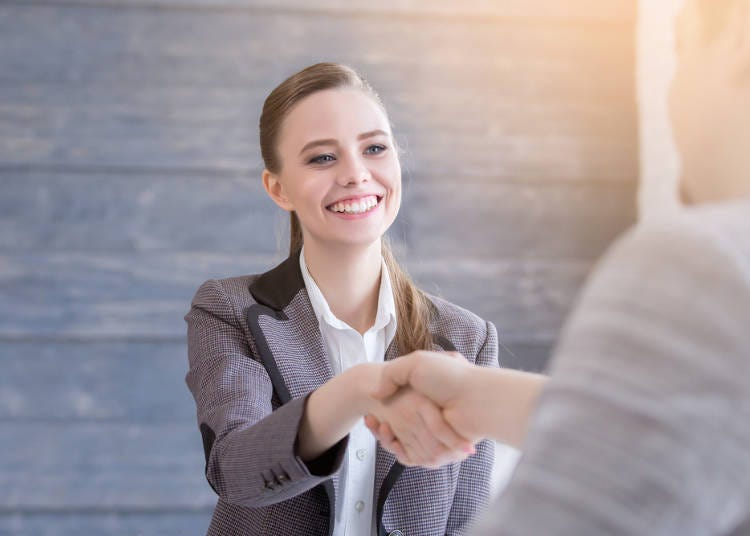 “Personality” seems to be a big factor for Japanese employers but not so much in the United States.

“In the States, I think the main factor that companies care about is qualification, not personality. If they spot a talent, it’s common practice to immediately hire that person. It’s the manager’s job to make sure that it works smoothly.

To make it easy to understand, imagine the anime ‘One Piece.’ Luffy accepts all sorts of strange people into his crew but it’s the best there is. He utilizes talent while paying attention to everyone’s unique character. He’s probably the ideal manager.”

In Japan, it’s not uncommon to be asked about your personal life, such as hobbies, to get to know your personality. But if you want to self-promote during an interview in the United States, focus on your skills and practical experience. 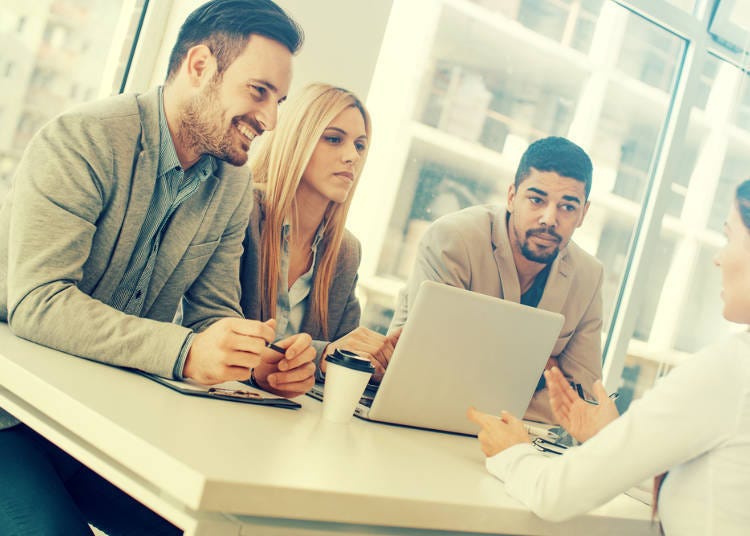 Being asked to speak about your motivation for the job – and the company behind it – is normal at a job interview in Japan.

“I feel like Japanese interviewers ask questions like ‘What do you think about our company?’ and ‘What do you like about our company?’ a lot. If I were an employer, I wouldn’t want to hear answers like ‘This and this about your company is so amazing!’ (laughs) I mean, you’re not working for them yet, are you. So, people look up things on the internet to say about a place, but isn’t that a bit pointless?”

Certainly, questions like that inevitably lead to superficial answers that are prepared in advance. However, theories by job seekers suggest that employers do that to see whether applicants can keep a clear head and stay calm, being well aware that every interviewee is invited by far more than one company and has to prepare accordingly.

5) I Could Sue You for This... Age and Gender Needs to Be on a Japanese Resume 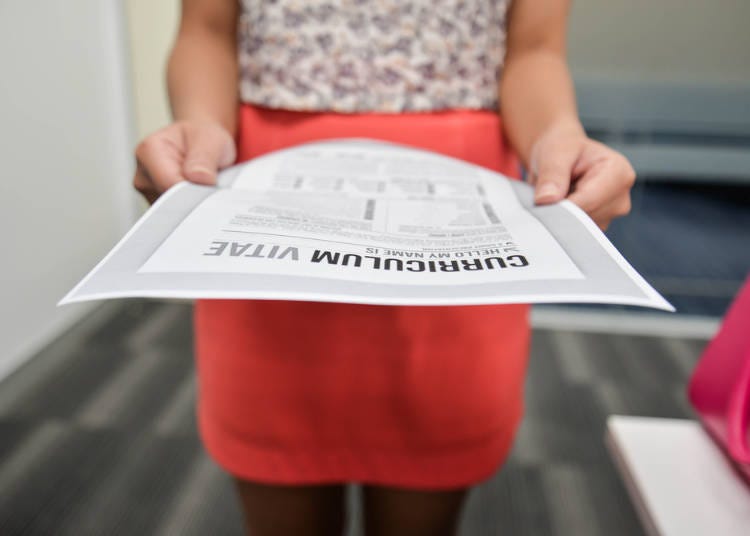 Japanese resumes have a very strict format. So strict, in fact, that it is basically already decided what to write in there. This is baffling to a big part of Japan’s international workforce.

“In the United States, you do not write your gender, birthday, birthplace, or whether you have a spouse or dependents in a resume. Even photos aren’t required, except for certain professions. If an employer in the United States asked for this kind of information, they’d be hit with a lawsuit.”

For reasons of privacy and non-discrimination, information like age, gender, and marital status do not belong on a resume in the United States. In Japan, however, they’re still expected.

6) When are We Talking About Work...? Few Questions About Skills and Experience 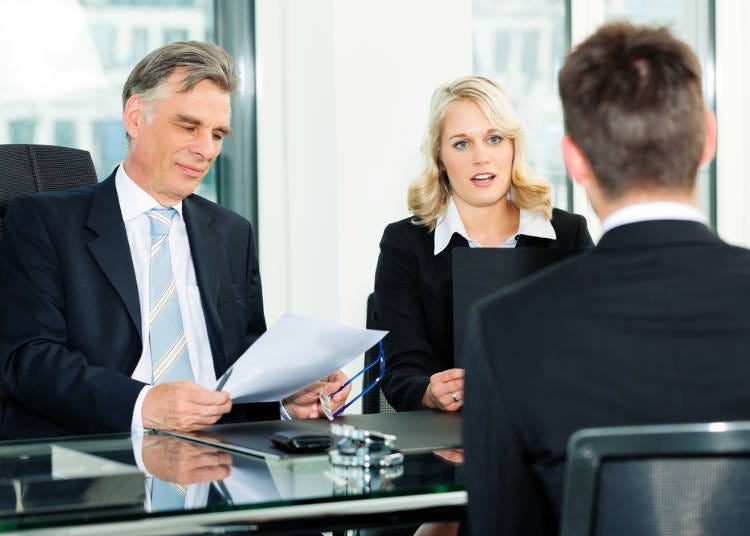 “Job interviews in the United States are all about skill. Whether someone can do the job or not, that is the main and usually only focus. That’s why one’s skills and prior experience are the most important. In Japan, I was actually worried about my possible lack of skill and experience sometimes, but there were few to no questions about them.”

A clear vision of one’s career seems to be the main factor of the job market in the United States. On the other hand, Japan still holds the image of gaining skills and experience primarily at one company, which is also why changing jobs and companies is sometimes seen as questionable at best. This is a characteristic that many job seekers from the West tend to struggle with.

7) Why Did They Bring a Laptop...? The Attention Seems Divided Between You and a Screen 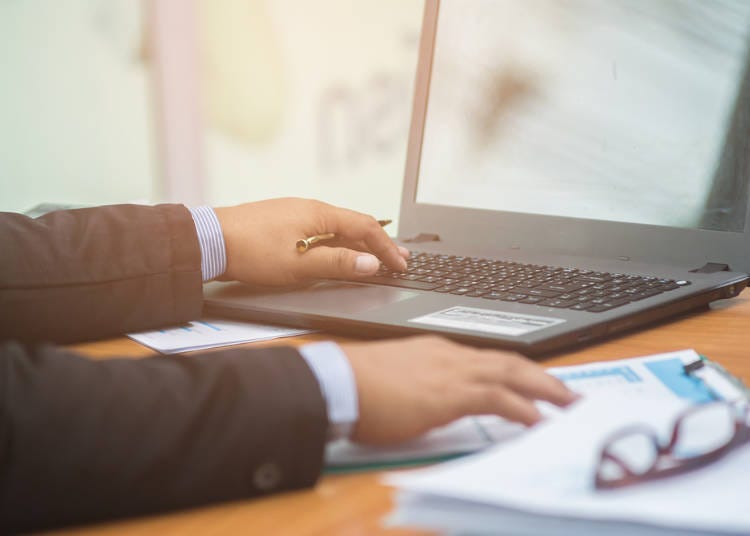 In recent years, the standard image of a Japanese employee in a suit now also includes a laptop under their arm. In conferences and meetings, everybody seems to look at a computer.

“I was really surprised when my interviewer sat in front of me with a laptop. I was wondering whether they’d take notes about the interview, thinking that it might be a person with a weak memory or some such. It feels like someone isn’t paying much attention when sitting in front of an open laptop, isn’t it? It seemed rude to me. It’s not what you would do in a job interview in the States.”

8) Am I Sitting in Court? The Atmosphere is Heavy, Laughter is Rare 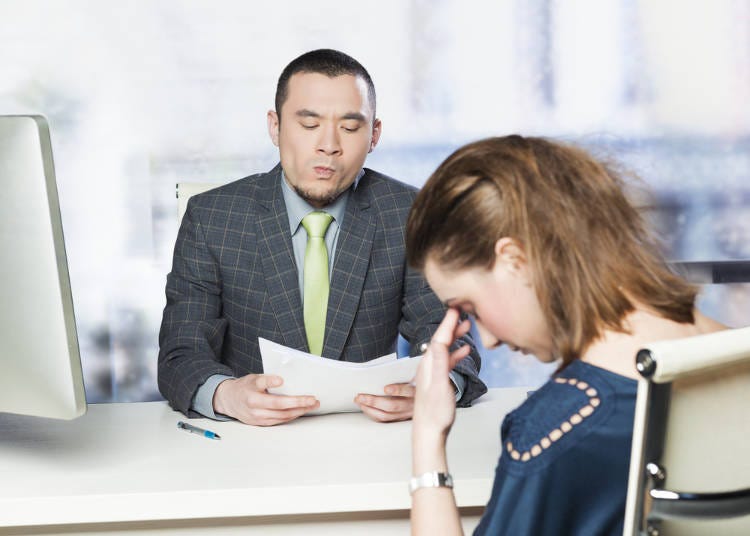 “Whenever I go to job interviews in Japan, the atmosphere feels heavy, like I am being tried in front of a judge! (laughs) It really seems more like an interrogation and some interviewers won’t laugh at all. I tried my best to at least get them to smile, but even then, they just sat there and looked serious.”

Everybody is nervous about job interviews in Japan. You have to sit in a quiet room and answer questions while being checked and judged by the employer – a lot of people have issues with this kind of tension and pressure.

“I think that it’s important to create an atmosphere that people can feel comfortable to talk openly with each other. In America, it’s common to start with an icebreaker before the actual interview begins, but I feel like Japan is slowly starting to do that as well.”

9) Why are There So Many People Sitting in Front of Me? Multiple Interviewers Play Different Characters 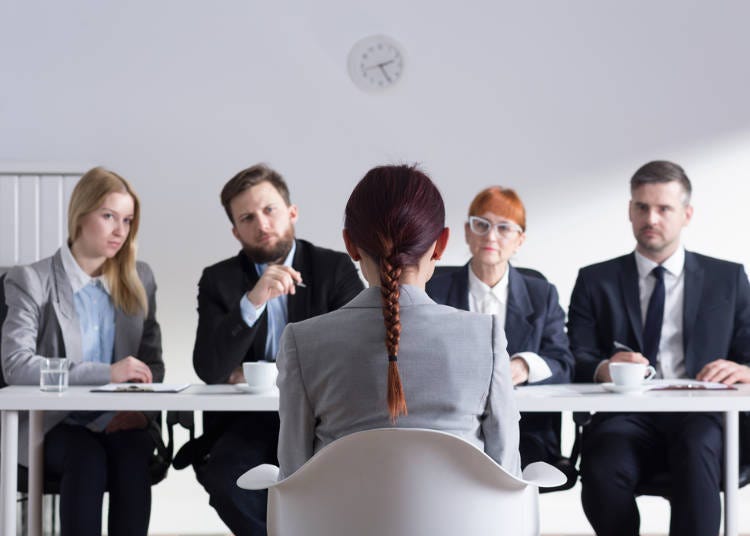 “Maybe it’s because no one wants to be responsible for the decision by themselves? It might be just my experience, but I expected to meet only one person, someone from the top level of the company.”

In Japan, companies tend to deliberately have multiple interviewers with different approaches, such as “gentle, understanding interviewer” and “interviewer who asks difficult questions.” This is to test who applicants react to these different characters, at least that is what a lot of job seekers report. Even so, sitting in front of a line of people is intimidating.

10) Why Do I Have to Train for a Job Interview? Japanese Business Etiquette is Important 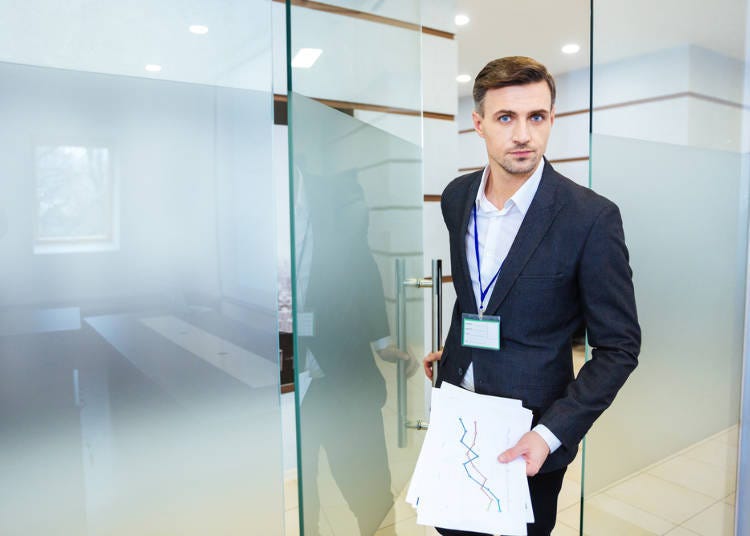 Job interviews in Japan follow a very strict routine, from the first know on the door to the phrase of “shitsurei shimasu,” spoken upon entering the room. Do NOT sit down before you are told to, stand next to your chair instead – a lot of international job seekers struggle with this strict ritual.

Yeah, Japanese business etiquette really is something else for people from abroad (laughs) I also went to a Japanese business school for three months to learn just that. In the States, there’s just no custom of ‘how to knock on the door properly’ and such.” (It's three knocks, if you were curious.)

Even Japanese college students are encouraged to participate in “practice interviews” before starting their job hunt. Business etiquette plays an important role even after joining a company, so it cannot be neglected.

“I actually learned phrases for my self-introduction by heart. ‘My name is so and so. I would like to contribute to your company by making use of my own experiences.’ There, I still can say it without thinking twice about it! (laughs)”

In the United States, companies look for people with the best skills and experiences. In a direct comparison, it can probably be said that there is a much clearer distinction between private and business life in America than there is in Japan.

From an American point of view, many things that belong to a Japanese job interview seem pointless. Japan’s business culture has embraced the concept of “coworkers are like family” for a long time, which is likely where the strong emphasis on personality comes from. While it is certainly true that there is a lot of room for improvement in regard to efficiency, Japanese companies have started to implement an interview style that is more global and takes into account the business culture of all kinds of countries.