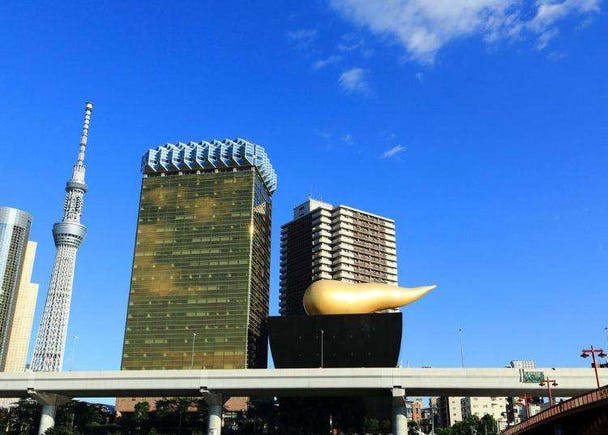 Here are the best Landmarks in Asakusa, with travel tips and more, according to LIVE JAPAN, a top-class travel website for visitors to Japan.

Our ranking is based on the most popular pages viewed by foreign visitors in a given category. For instance, Asahi Group Headquarters, Azuma-bashi Bridge, Kototoi Bridge and other related spots will be listed. Be sure to check them out during your visit to Asakusa! 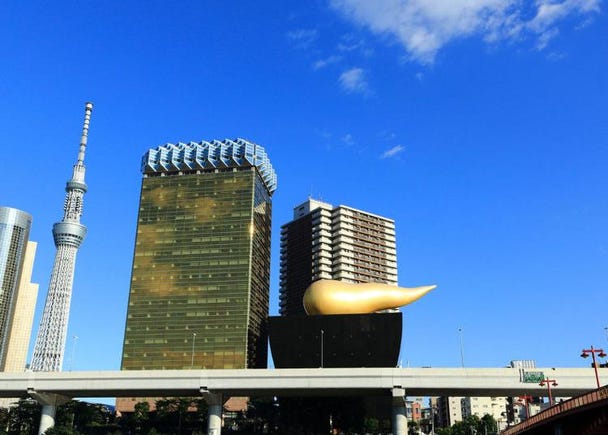 This is Asahi Group's main building, which is located close to the Sumida Ward Office and was completed in 1989. It has a very impressive external appearance; the amber-colored glass and the white wall at the top part represent a mug filled with beer, one of the leading products of Asahi Group.

On the 21st and 22nd floors of the building is a restaurant full of luxurious ambiance, and you can enjoy dining while overlooking the Sumida River and the townscape of Asakusa from 100 meters above the ground. Also, the Super Dry Hall, which was designed by Philippe Starck, a French designer, is located next to the building.

An ”objet” of a fire flame on top of the hall is very eye-catching, as well. Within the Azumabashi building, there are not only an event hall but also a beer hall where you can taste quality-controlled Super Dry draft beer. The closest station is the Asakusa Station on the Ginza Line, Asakusa Line, and Tobu Isesaki Line. 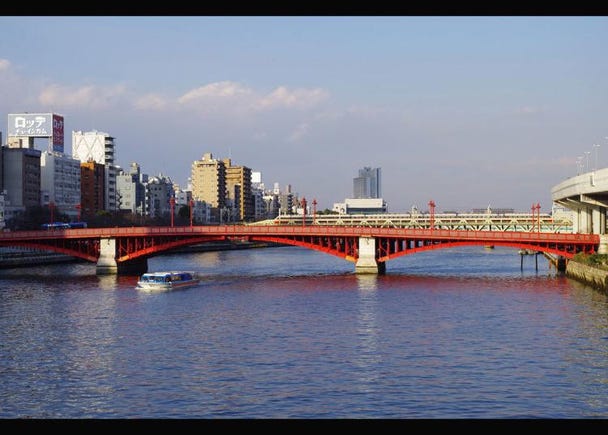 Originally named Ogawa-bashi in 1774 for stretching across the large Sumida river, it was renamed Azuma-bashi following its reconstruction in 1876.

The bridge was rebuilt several times after this, and following the Great Kanto Earthquake, in 1931 the bridge was finally reconstructed into the shape we see now.

Around 300 cherry blossom trees run alongside the Sumida river, the beauty of which can be appreciated all the more from the vermilion Azuma-bashi in springtime.

Even now, sakura festivals bustling with people are held in Sumida park and along the banks of the Sumida River during the cherry blossom season. There is also a boarding point for the Waterbus on the bridge, where you can enjoy views of Tokyo from the river itself. Azuma-bashi can be found immediately outside Exit 4 of Asakusa Station. 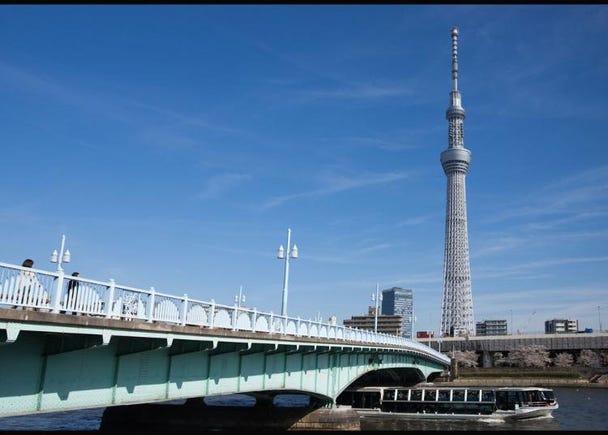 The Kototoi Bridge with its beautiful rectilinear shape was built over the Sumida River in 1928 during the reconstruction project after the Great Kanto earthquake. The 238.7 meter long and 22 meter wide bridge connects National Route 6 (Bokuto-dori Street) and the Kototoi-dori Street. Tiles with pictures of cherry blossoms are embedded in the foot path and you can enjoy cherry blossom viewing over 1 km along the west bank in spring.

It is said that the bridge was packed with people escaping from the fires caused by air raids during the war. To be able to tell the story of the war to the following generations, the main pillar of the bridge is kept in its burnt state as it was right after the air raids. 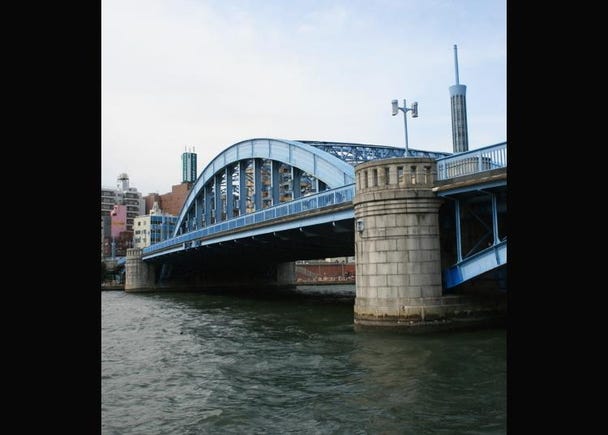 This bridge is named after Komagata-do Hall of Senso-ji Temple. The bridge was built in 1927 to connect Komagata in western Taito with Higashi-komagata, Sumida following the Great Kanto Earthquake.

Before that, there was a ferry called Komagata-no-Watashi, which was demolished when the bridge was completed. The blue, 150-meter-long, tied-arch bridge has a small balcony-like space in the middle — a nice place to take a break, and a popular spot for photographing Tokyo Skytree or the Asahi Beer building with its famous golden crown. Close to Komagata Nishizume Crossing near the A2 Exit of Asakusa Station on the Toei Asakusa Line. 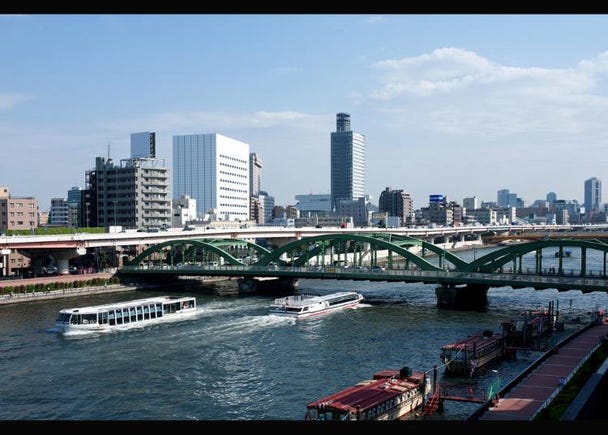 This bridge on the Sumida River, between Kuramae and Komagata Bridges, carries traffic from Kasuga-dori Street. The bridge is called Umaya (horse stable) because during the Edo period, the area had a stable for horses that transported rice to the government.

The original bridge was built in 1874 and relocated several times. Before that, boats were often used in spring for cherry-blossom viewing, and some would capsize; the locals therefore donated money to build a bridge. The present structure was built in 1929 after the Great Kanto Earthquake.

Some 151.4 meters long and bearing a glass ornament of a horse on its main pier, it is the only three-arch bridge with through composite girders on the Sumida. In summer, banks between the Umaya and Komagata Bridges become filled with onlookers during the Sumida River Fireworks Festival. A four-minute walk from Kuramae Station on the Toei Oedo Line.