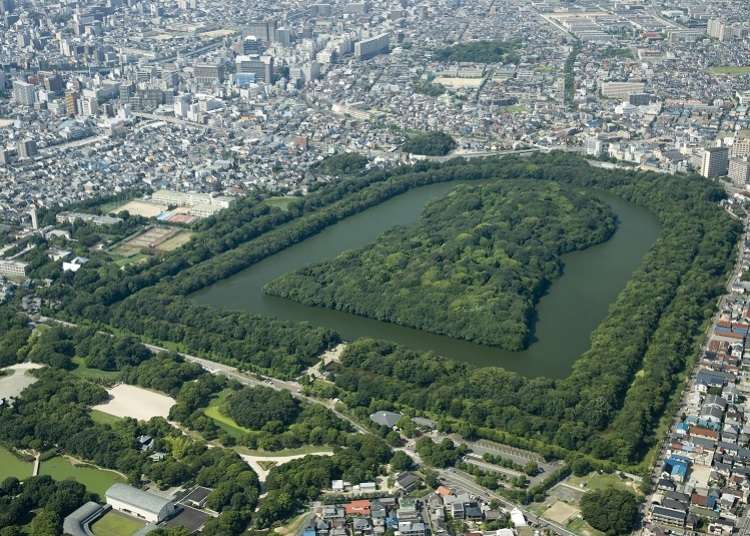 Registered as a World Heritage Site! Guide to Mozu Tombs and surrounding area

The Mozu-Furuichi Kofungun, Ancient Tumulus Clusters, were registered as a UNESCO World Cultural Heritage Site in July 2019. Among them, there are 44 old burial mounds, including one of the world's three largest tombs, that of the Emperor Nintoku. In this article we will explain what kofun, ancient tombs, are, how to visit them, other places of interest, and dishes with an ancient tomb theme. Kofun, also known as megalithic tombs, are gigantic burial mounds that were built between the latter half of the 3rd century and the latter half of the 6th century. They are large mounds in which people of high status were buried at that time. They are configured in the shape of a keyhole described as being square at the front and rounded at the rear, the front area being short so that they very much resemble scallop shells which also results in them as being described as scallop-shaped mounds, their sizes ranging from about 10 meters upwards. The largest one is more than 400 meters in size. 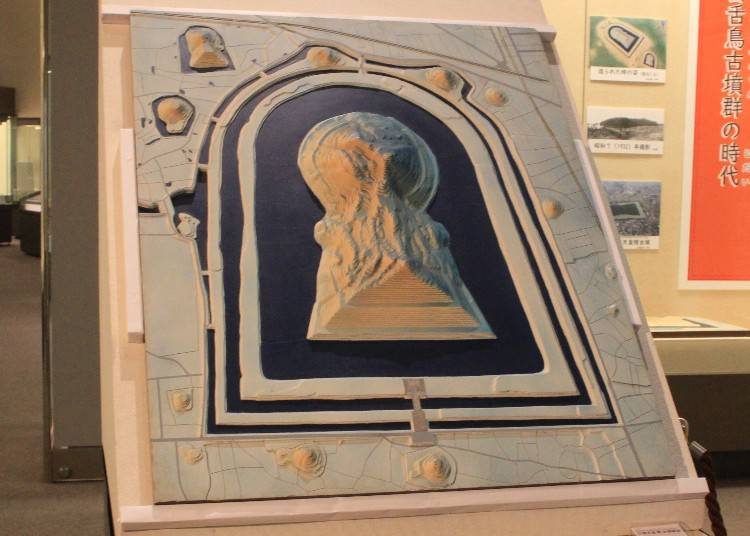 The Mozu Tombs cluster is spread over about a 4-kilometer area going east to west and north to south within the city of Sakai. There are several large burial mounds here, such as the tomb of Emperor Nintoku (the largest mound in Japan), the tomb of Emperor Richu (the third largest), and the Nisanzai Tombs. Today 44 tombs remain, however during the 4th to 5th centuries more than one hundred such tombs were built in this area. Nowhere else in Japan can so many different shaped ancient tombs ranging in sizes and scale be found in one area such as here which also includes the Furuichi Burial Mounds. 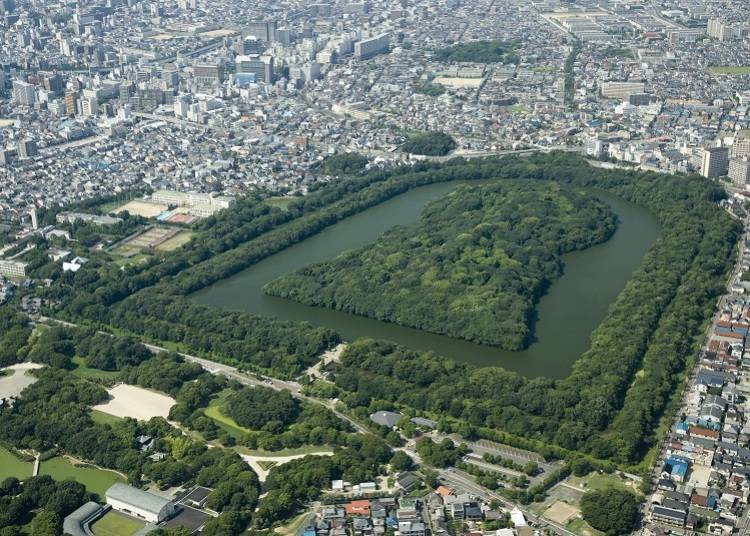 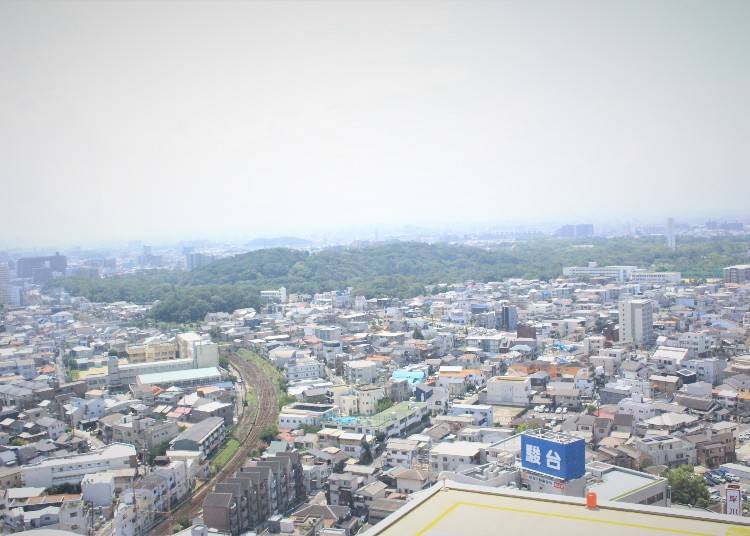 The observation lobby is on the 21st floor of the city hall. From this height of 80 meters you can get a panoramic view of the city from the lobby which revolves 360 degrees making this the highest place from which to observe the tomb of Emperor Nintoku. The tomb is covered in a thick cluster of trees. You can get a good idea of its scale compared to buildings near it. 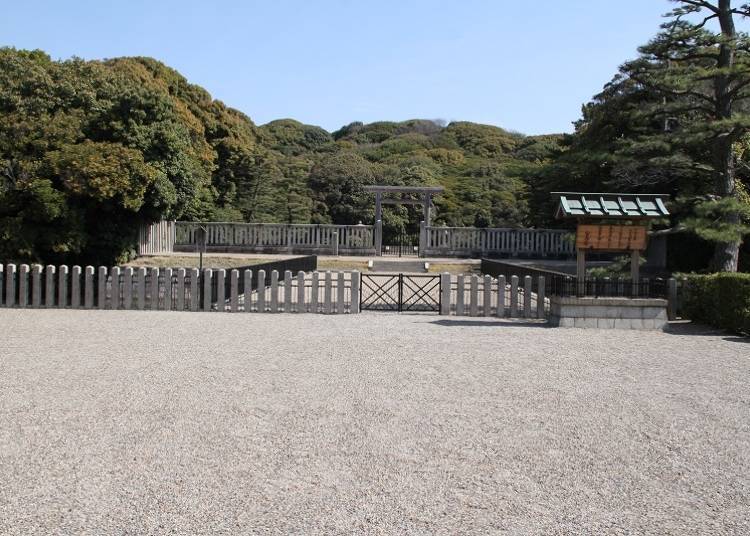 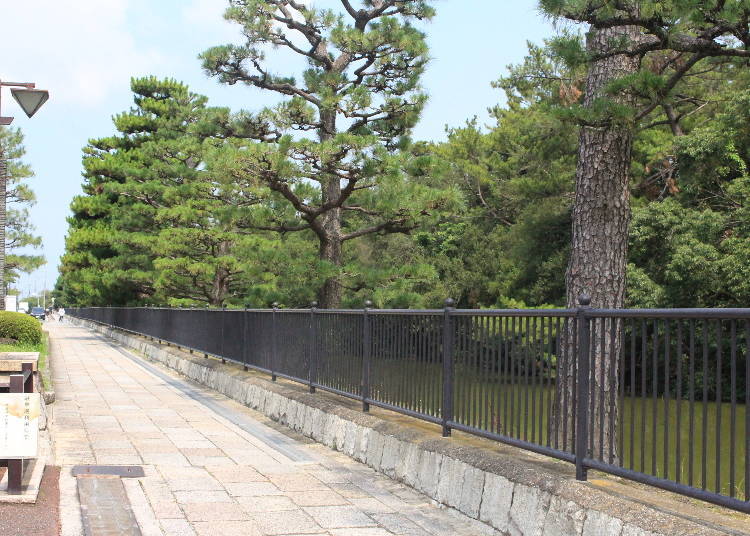 Emperor Nintoku's burial mound, along with the others, are mausoleums of emperors and members of the Imperial Family and as such, entry is prohibited. However, there are sacred areas indicated by Torii gates facing the tombs where individuals can worship or pay their respects. There is such a place at the front of the keyhole-shaped Emperor Nintoku Mausoleum (located at the southern end of the burial mound). This is a good place to visit. There is a 2.85-kilometer long path going around the outer moat of the tumulus which you can walk. Walking along it will give you a good idea of its scale as seen by people of that time.

If you would like to see what it is like inside the burial mound, you can take a virtual tour of it at the museum. 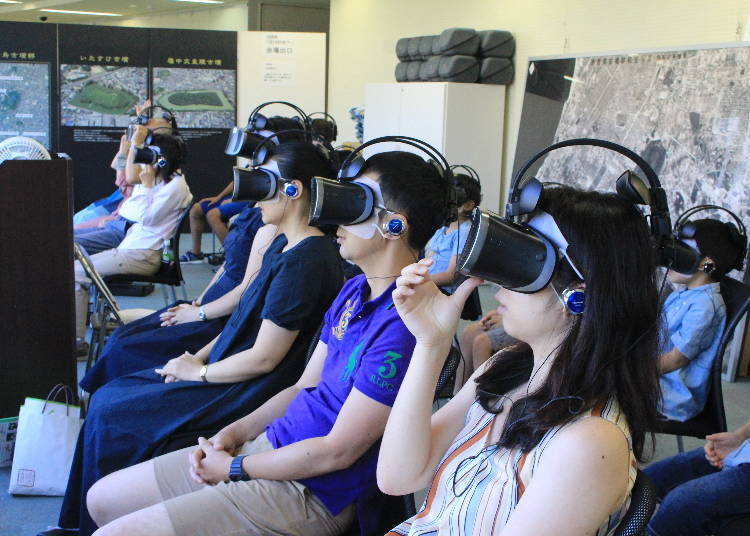 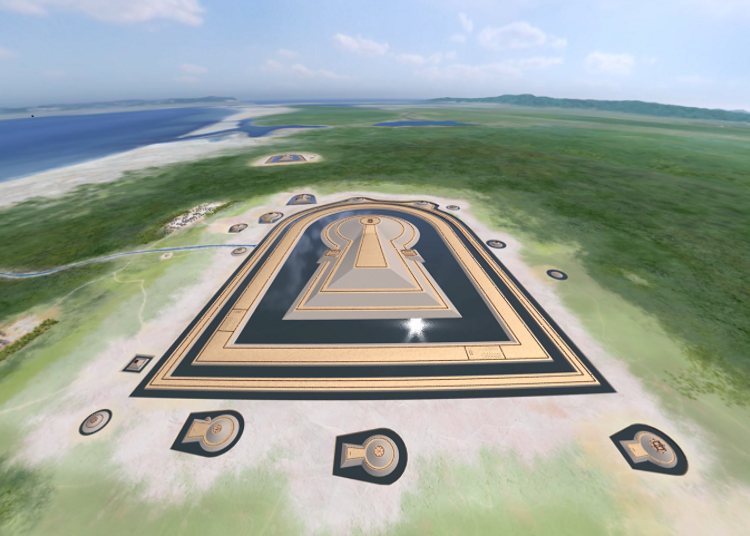 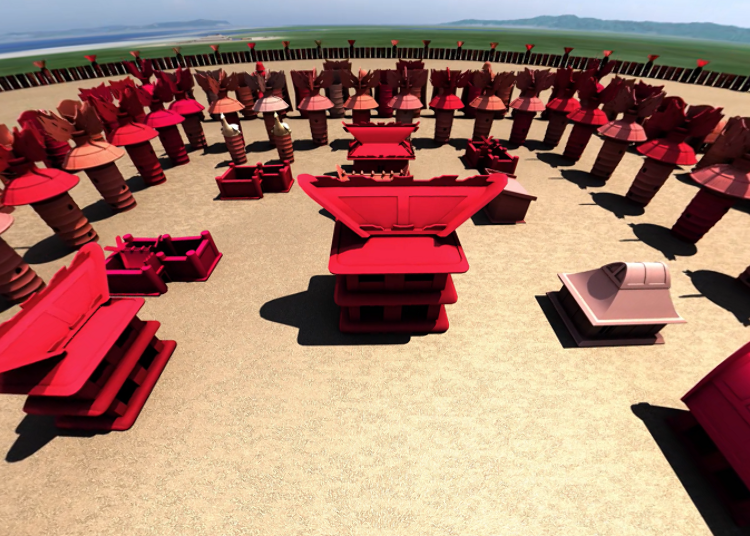 The Sakai City Museum is located in Daisen Park, which is almost in the center of the Mozu-Kofun Tumulus Cluster. There are a number of exhibitions providing information about the Mozu-Furuichi Tumuli as well as artifacts excavated from them and there is also a Mozu-Furuichi Tumulus Cluster Theater that also contains all sorts of information related to the tombs. Highly recommended is the Emperor Nintoku Tumulus VR Tour. Wearing the head-mounted display you will be guided on a tour of the tomb in a 360-degree image that also takes you 300 meters above it for a bird's-eye view of it. You can get a feeling of what the stone interior of the burial mound built about 1,600 years ago, which today is inaccessible, must have been like through a CG recreation of it. 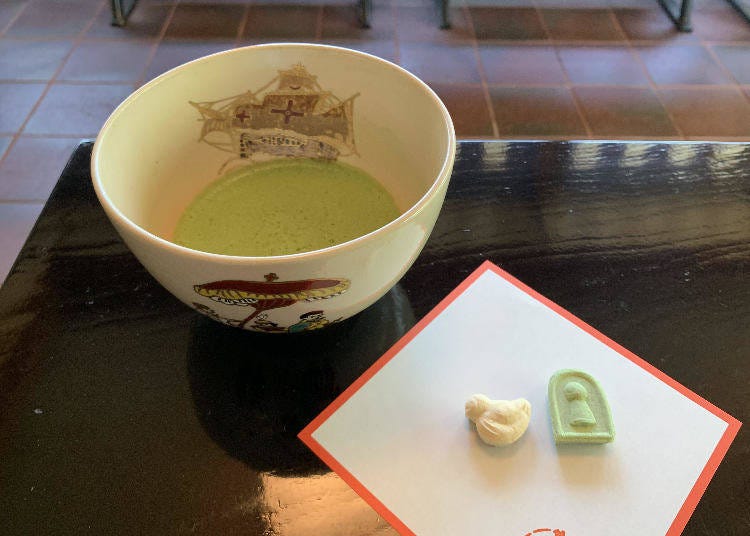 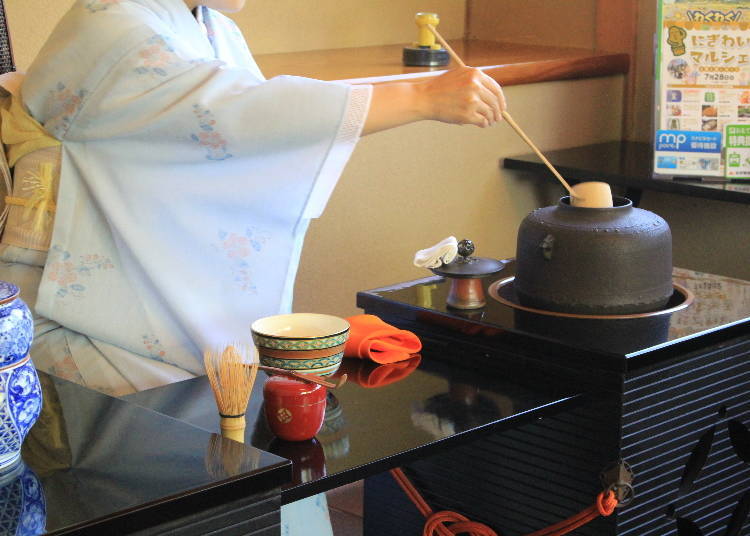 By the way ... there is also the only bicycle museum in Japan! 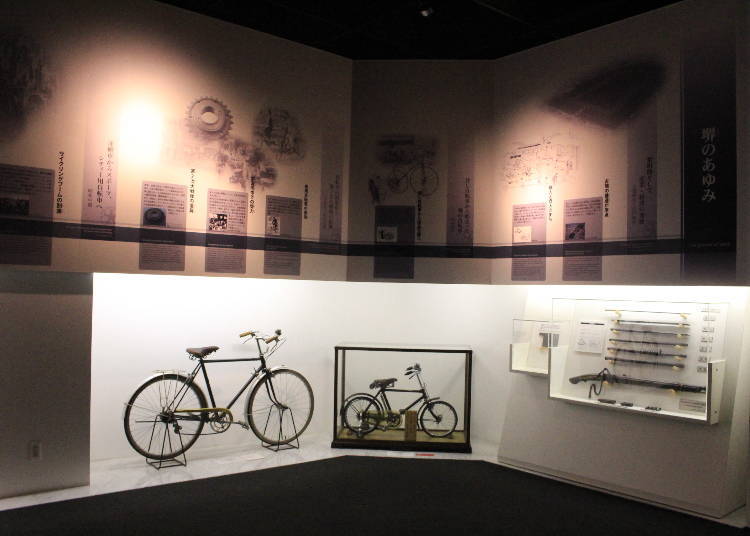 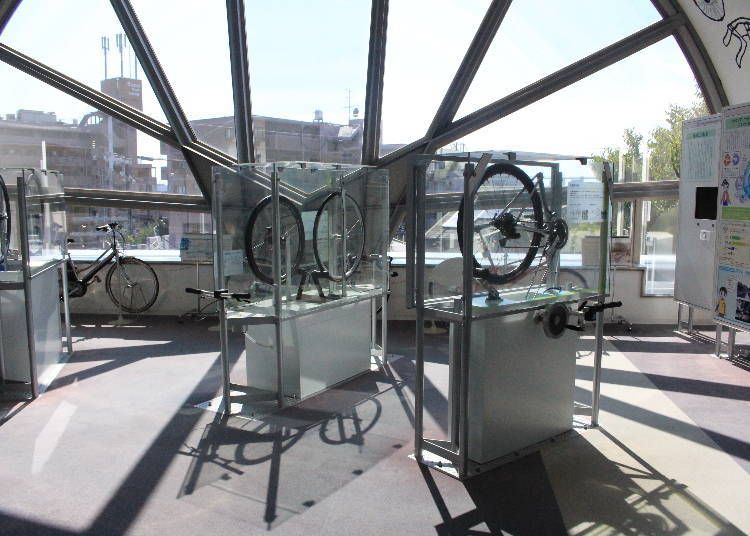 If you want to enjoy tumulus-themed dishes, this is the place to visit 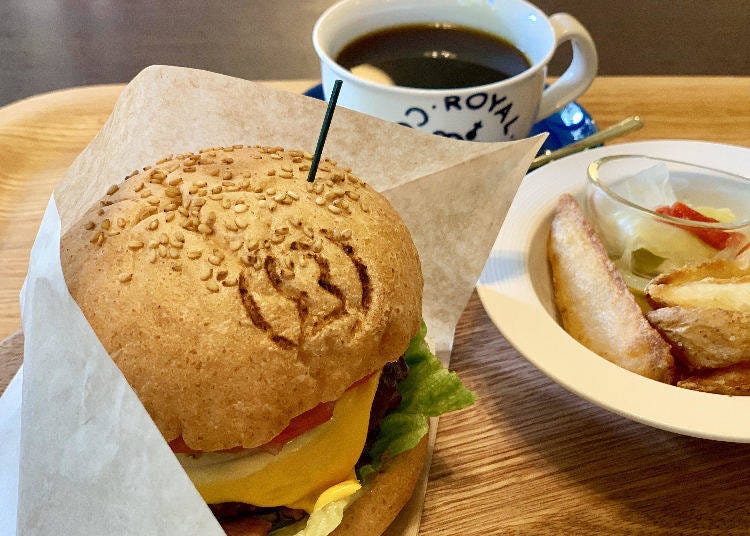 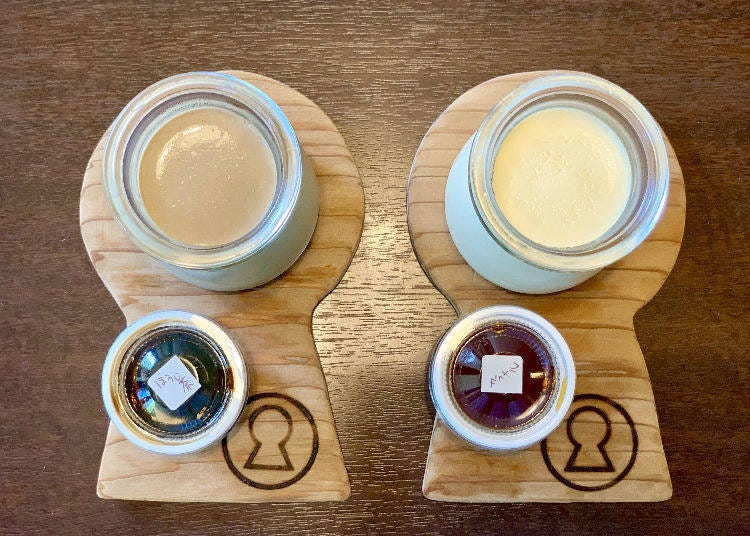