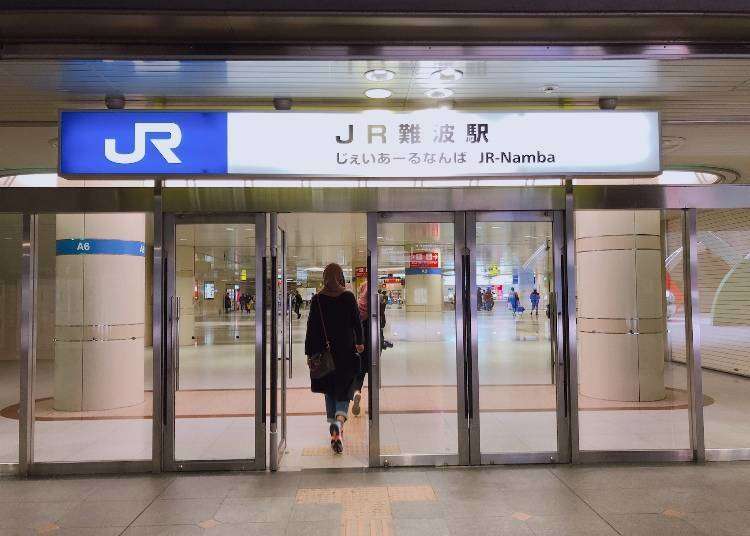 Ultimate Osaka Namba Station Guide: Get Around Osaka's Massive Station and Sights Like a Pro

Osaka's Namba Station will be a destination on your list or at least a place you'll pass through when visiting Osaka. Namba Station is a major terminal providing access to Nara, Wakayama, and other sightseeing spots in the Kansai area.

And so, Namba Station isn’t made up of just one station but rather a collection of six stations. For first-time visitors, it can be a daunting prospect. Fortunately, our writer, who lives in the Kansai region, is here to help you unpack Namba Station, and make full use of this convenient station!

What kind of place is Namba Station? 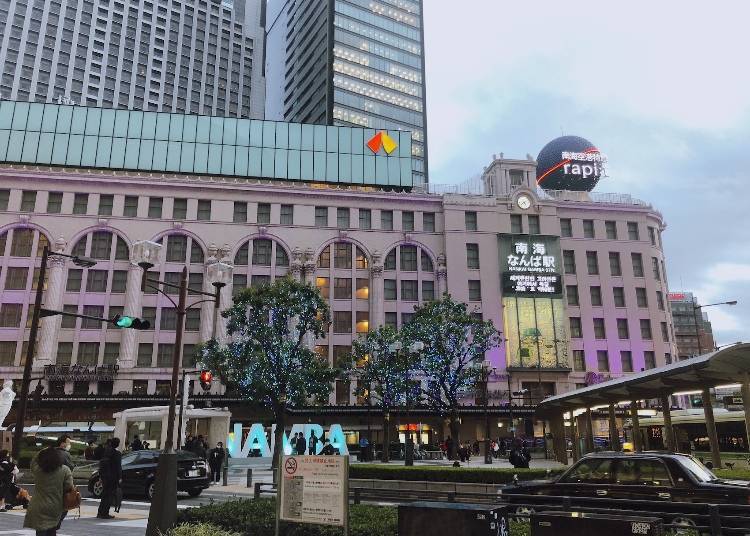 Osaka’s sightseeing areas can be roughly divided into two major groups: the northern area, surrounding Osaka and Umeda stations, and the southern area, near Namba Station.

The northern area is closer to Kyoto, and exudes a more polished and refined atmosphere.

There are six different stations in Namba, so look out!

Depending on your destination, you’ll need to board from a different station, so do be careful not to go to the wrong one! 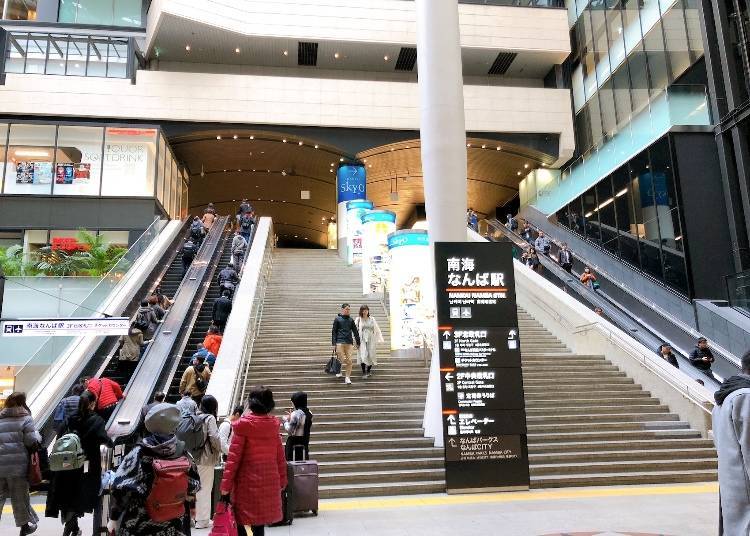 Go up this escalator to reach the platform

The Nankai line’s Namba Station is the terminal station for Nankai Railway, and is directly connected to the department store Takashimaya. You can also conveniently pop by the shopping malls Namba Parks and Namba City from here.

From this station, you can go to Kansai International Airport and Wakayama. Mount Kōya, one of the sacred sites of Buddhism can be easily accessed from here. Take the Nankai Limited Express train from Namba Station towards Gokurakubashi Station, where you can take a cable car towards Mount Kōya Station. The entire journey takes approximately 2 hours and 10 minutes, and costs 2,180 yen one way. 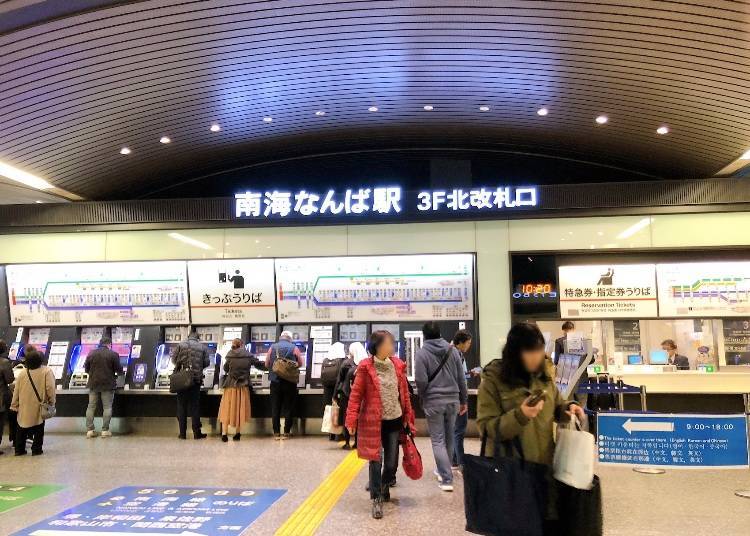 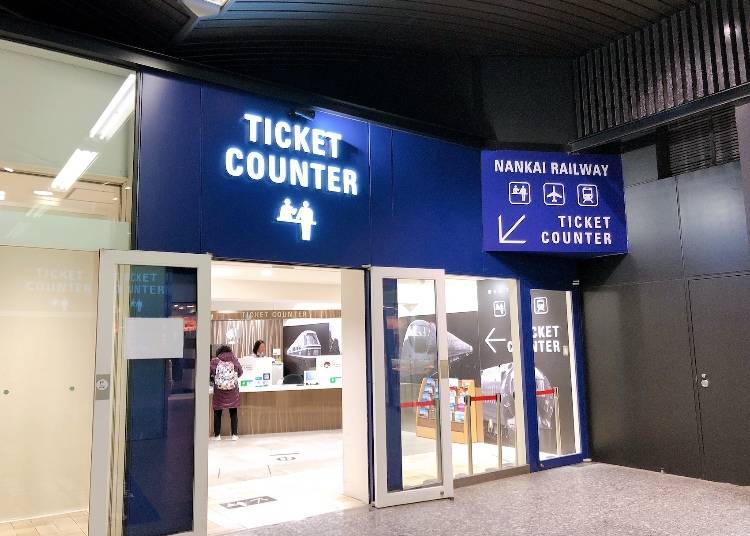 Tickets can be purchased from the unmanned vending machines on the third floor, or for foreign language support, you can use the ticket counter, which opens from 9:00 a.m. to 6:00 p.m. 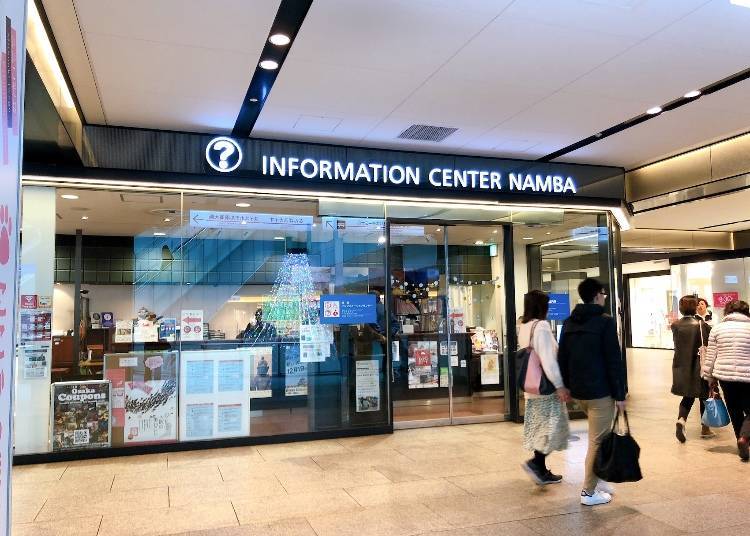 On the first floor is the Information Center Namba, which provides sightseeing and holiday information not just on Osaka and the Nankai lines, but throughout Japan as well. The counter is open from 9:00 a.m. to 8:00 p.m., and provides services in English, Korean, and Chinese, so don’t hesitate to ask for help if you’re lost. 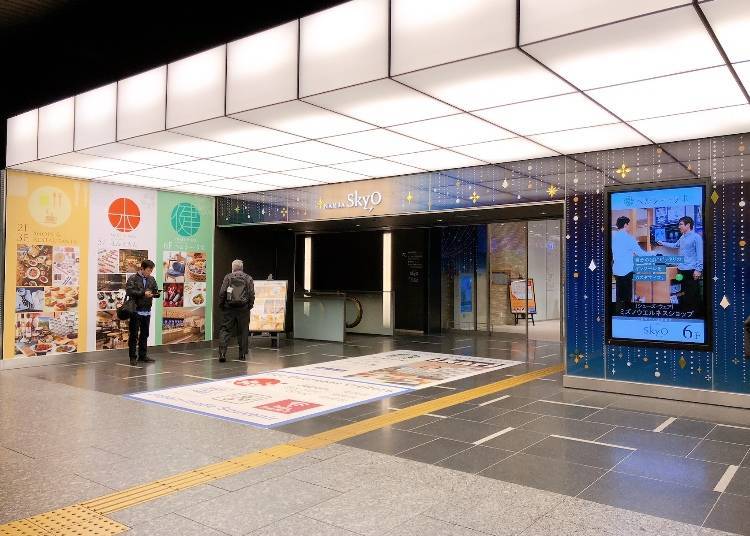 Osaka Metro’s Namba Station: Best for exploring the city itself 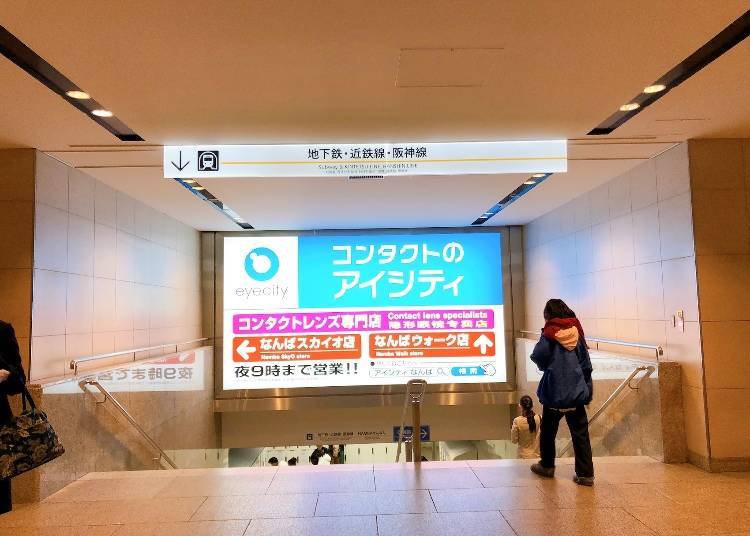 From the Nankai line’s Namba Station, take an escalator to the basement floor and walk straight, and you’ll reach the entrance of Osaka Metro’s Namba Station.

Osaka Metro operates the subway lines that connects all the corners of Osaka city together, allowing you to go to such places as Umeda, Shin-Osaka, Tenmabashi, and Nakazakichō. 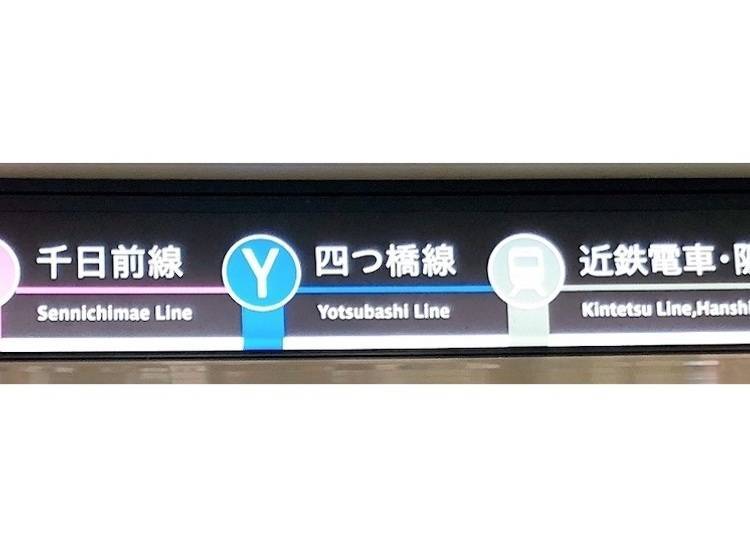 At the basement floor, signs at the ceiling clearly indicate the different lines at the station, along with their English names as well, making it easy to navigate the area. 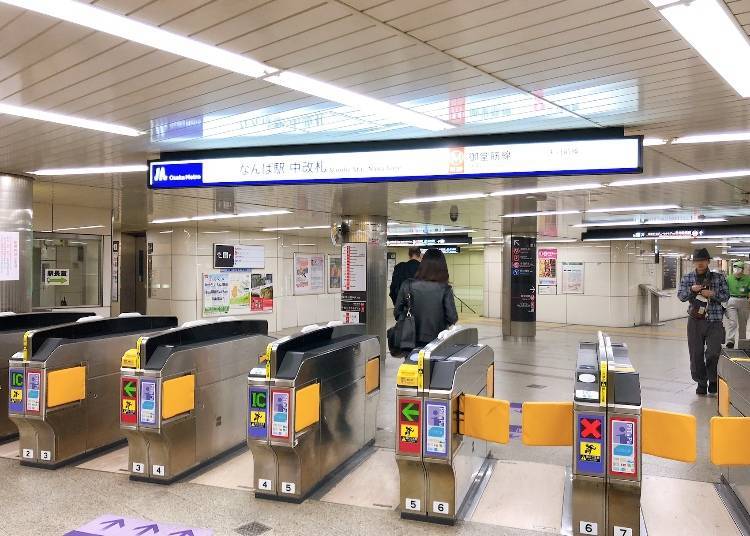 First is the entrance to the Midosuji line’s Namba Station. The Midosuji line is the line that cuts right across the heart of Osaka, making it the most heavily used train line.

Connecting to Shinsaibashi Station, Umeda Station, and Shin-Osaka Station, it’s a terminal station that provides access to many of Osaka’s major sightseeing places. 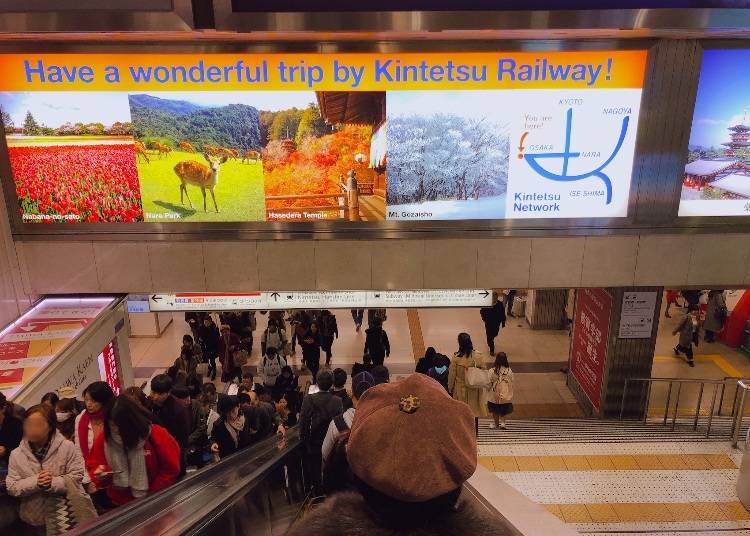 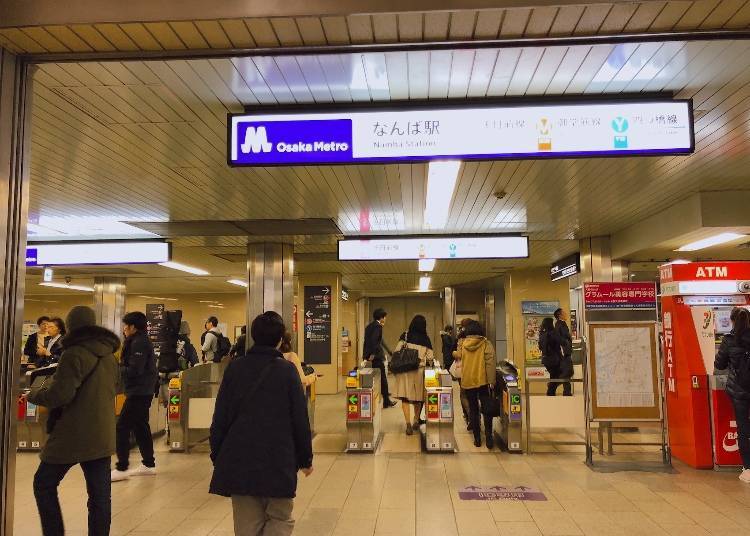 The Sennichimae line connects to the downtown area of Osaka, making it most frequently used by locals. From here, you can easily access Shinsekai, a street oozing with the essence of Osaka. You can also change lines at Ebisucho station in Shinsekai for the Sakaisuji line, which brings you to Kuromon Market at Nipponbashi Station. 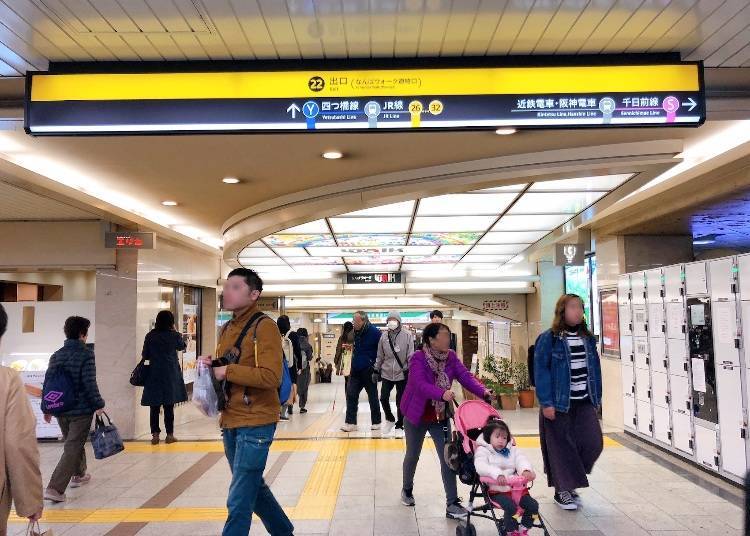 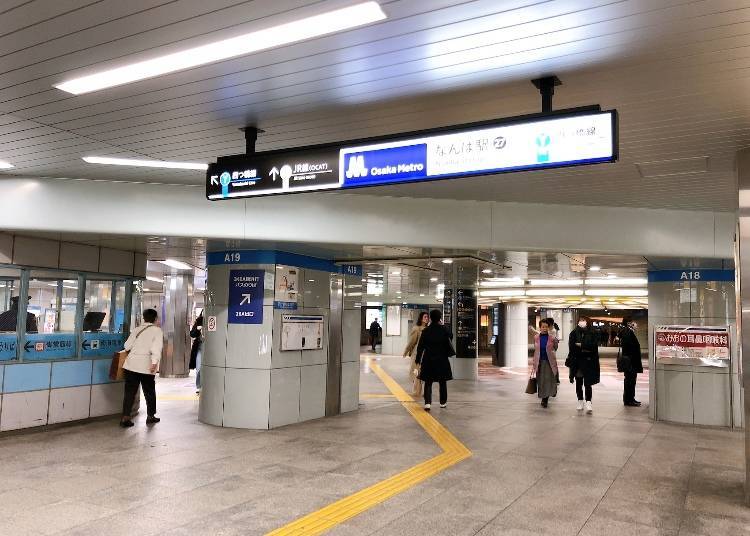 If you don’t take the elevator down to the Sennichimae line and instead continue walking straight, you’ll reach an intersection between the underground mall Namba Walk, and the entrance to the Yotsubashi line’s Namba Station.

The Yotsubashi line runs parallel to the west of the Midosuji line, covering many office areas and financial districts, making it more frequented by office workers and businessmen, than tourists. 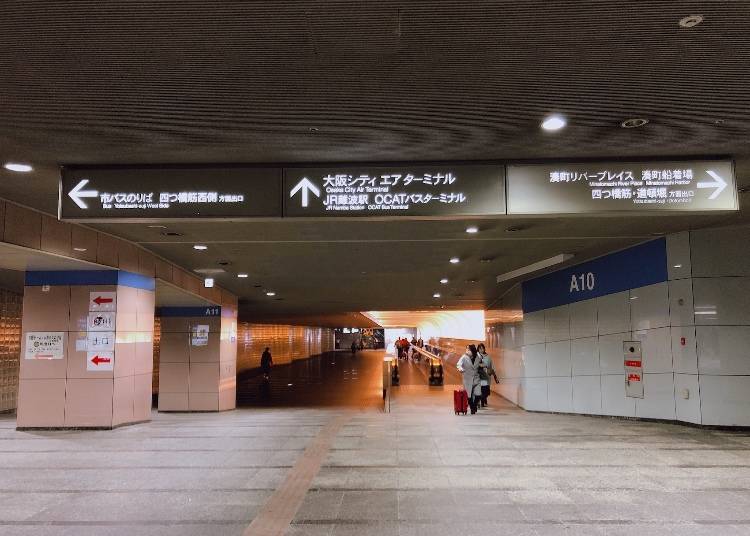 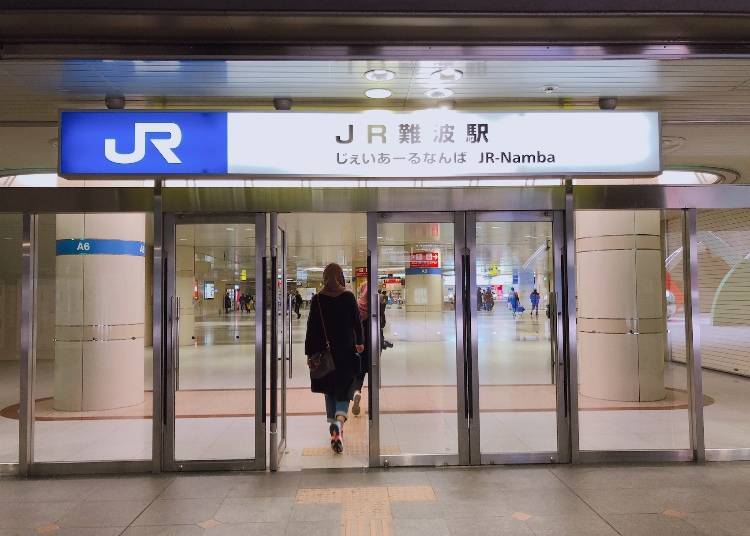 After passing by Osaka Metro’s Yotsubashi line, continue walking straight to reach the entrance of the JR line’s Namba Station. Though the Nankai line’s Namba Station is directly connected to JR Namba Station completely by underground walkways, it can take more than ten minutes to walk the entire way, so do take note, especially if you’re in a rush.

JR Namba Station provides convenient access to Shinimamiya Station, which, like the nearby Shinsekai, has many hostels at affordable rates, as well as Tennoji Station, a downtown area with cheap and delicious gourmet offerings. 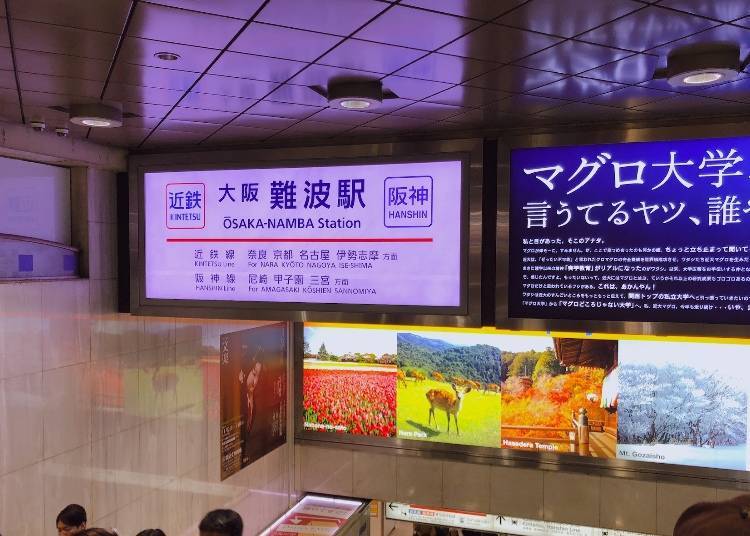 From Kintetsu Nara Station, famous for the deer in Nara Park, to the fashionable shops and gourmet restaurants in Kobe-Sanmiya Station, you can access either location without having to make any transfers. 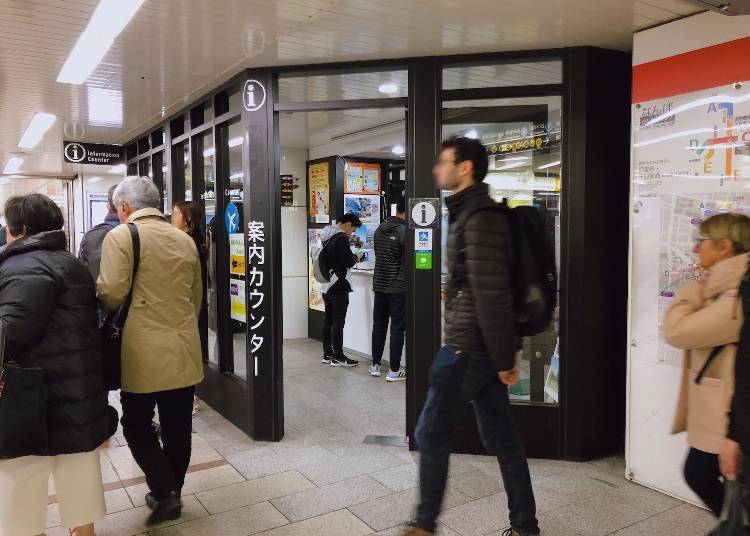 Though there are signboards in the underground streets connecting the Nankai, Osaka Metro, Kintetsu-Hanshin and JR lines, if you do get lost, you can check out the information counter at the escalator in front of the Sennichimae line and Kintetsu-Hanshin line. English, Chinese, and Korean guidance is available too. 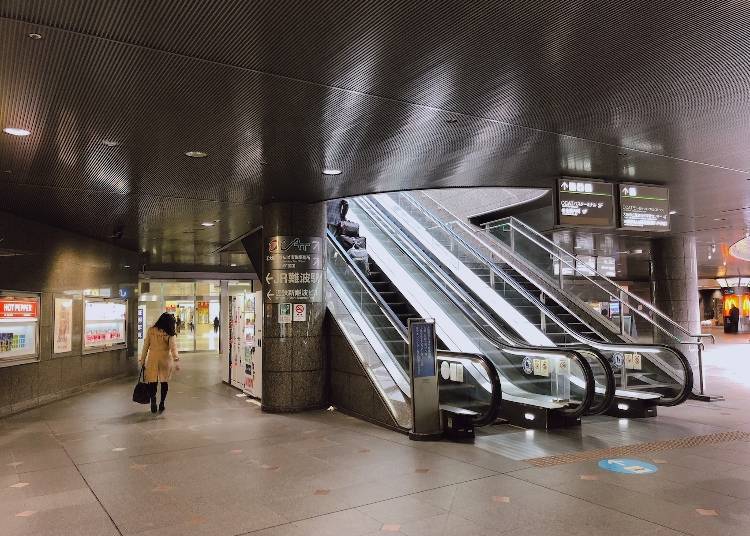 If you’re using the highway bus, you can reach many places from Namba with ease. One of the major bus terminals in Namba is the Minatomachi Bus Terminal on the second floor of JR Namba Station. You can access it from OCAT shopping mall as well.

From the underground street of Namba, head in the direction of OCAT, and take an escalator straight up. 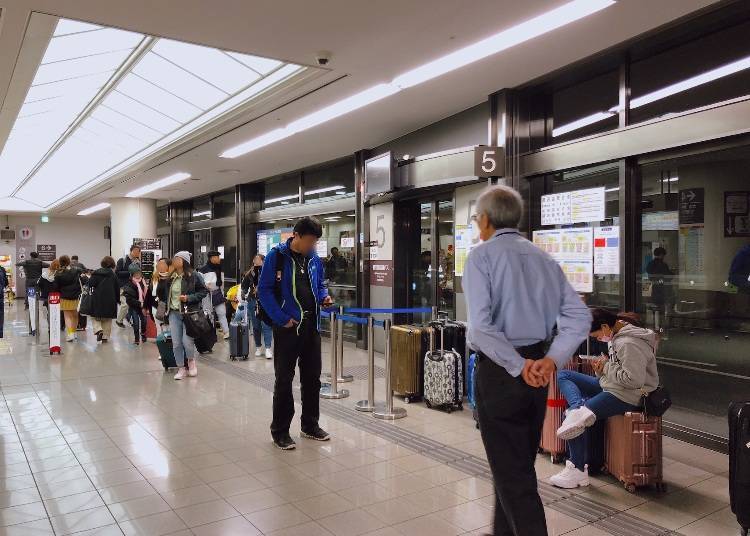 From Minatomachi Bus Terminal, you can head to both Kansai International Airport and Osaka International Airport, as well as travel to various locations around Japan too. Besides the Kansai area, night buses to Tokyo, Kyushu, and Shikoku leave and arrive here too, giving this place a holiday mood. With an abundance of dining options and even massage shops available, even if you do arrive early for your bus, you can pass your time waiting in an enjoyable manner.

It can be a real pain lugging your baggage around while sightseeing. In such a case, you can make use of the coin lockers available at each line of Namba Station. We’ll introduce a few of them. 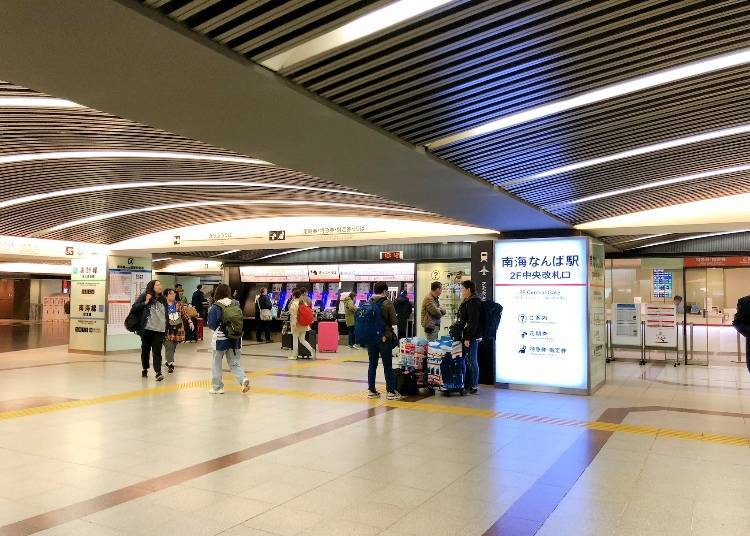 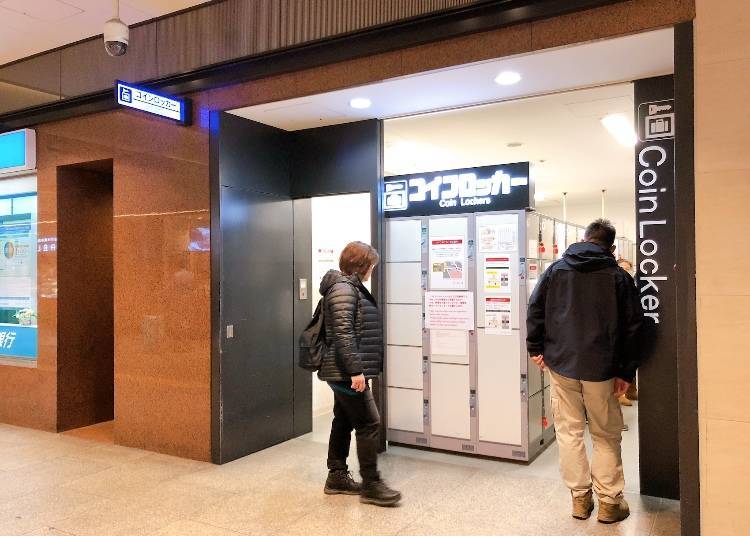 ■First floor of Nankai line’s Namba Station
The first floor has a large and convenient locker space too. During certain times of the day, staff will be on hand to assist you too. Usage fees here also range from 300 to 900 yen. 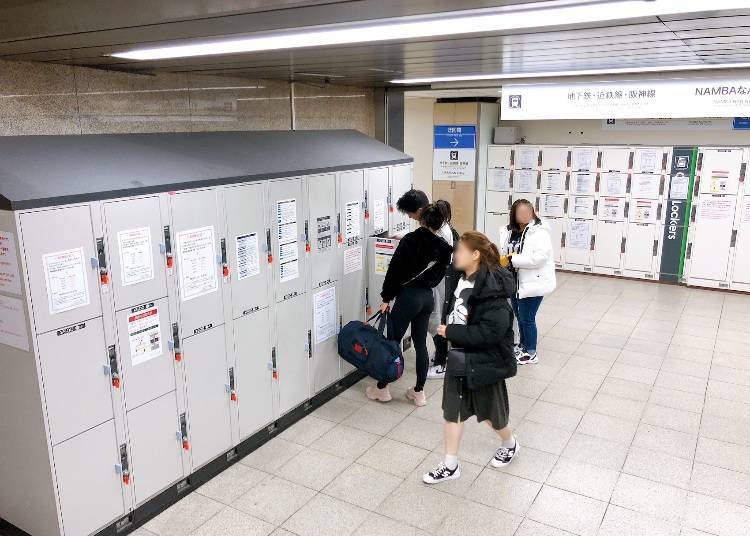 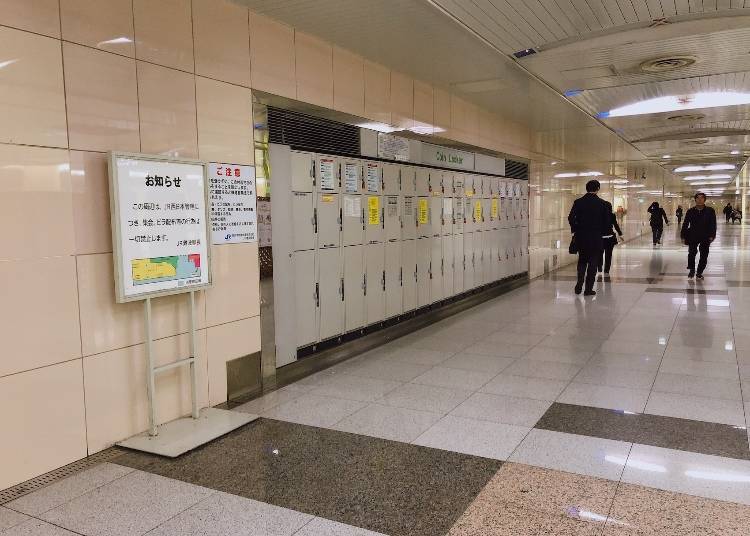 Lockers are available in OCAT too, so you can use those while waiting for your bus.

Shopping and Sightseeing Points of Interest Around Namba Station 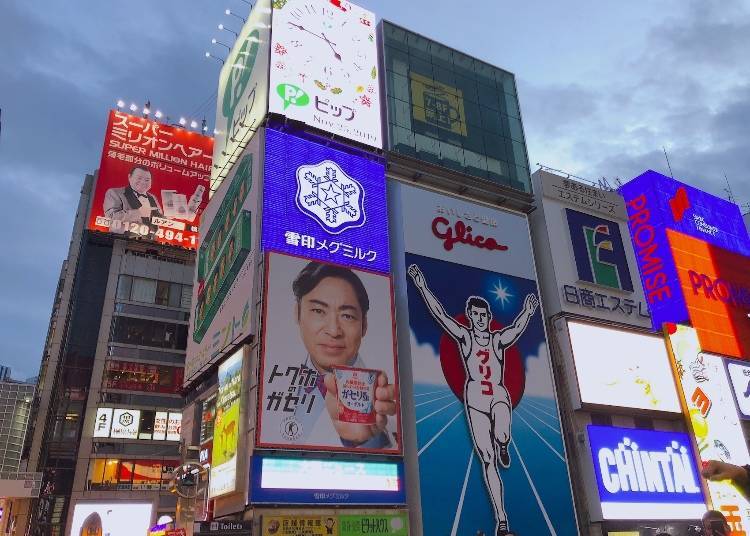 Besides these, Shinsaibashi Station is just one stop away via Osaka Metro’s Midosuji line, while Nipponbashi is just one stop via the Sennichimae line. Both are also 10 to 15 minutes away by foot, and you can easily walk to both with a map as your guide.

For food and souvenirs near Namba Station, this is the place 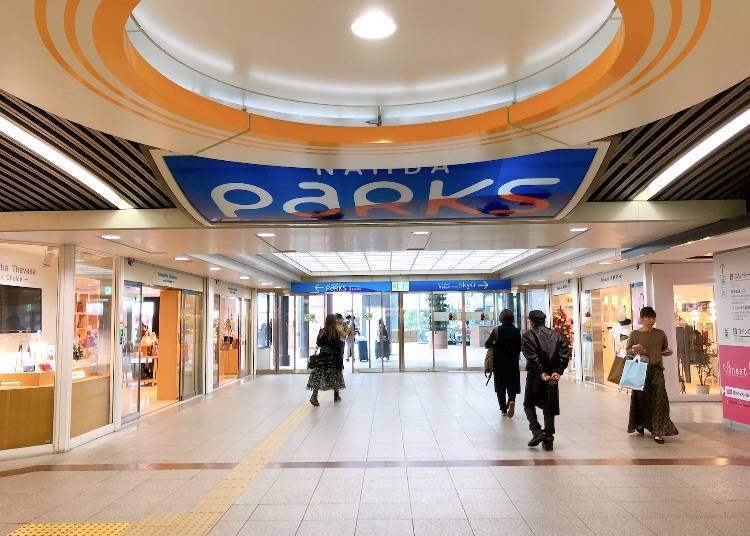 The Nankai line’s Namba Station and Osaka Metro’s Namba Station is connected to the underground shopping street, with numerous restaurants and shops available. We’ll introduce a few shops and eateries near each line.

■Near the Nankai line’s Namba Station
On the third-floor of the central exit, Namba SkyO is on the right, while Takashimaya is on the left. If you descend to the second floor, you can follow signs to reach the fashion mall Namba Parks. Besides getting your hands on many trendy items, there are many restaurants available, as well as the popular capsule hotel, 9hours.

If you head underground, you’ll reach the shopping street Namba CITY, where you can find many fashion-related items and eateries, as well as bookshops, among others.

■Near Osaka Metro’s Namba Station
To the right of the Midosuji line’s exit, is the shopping street NAMBA Nannan. There are cafés available for you to take a breather, as well as shops selling tempura, soba, and grilled chicken, amongst the wide variety of shops in its lineup.

From the Sennichimae line exit, you can reach Namba Walk, an underground street which reaches all the way to Nipponbashi Station. Here, you can find many affordable stand-and-eat sushi restaurants, as well as hotpot, pork cutlet, and eel restaurants, amongst many other eateries.

■Kintetsu-Hanshin Osaka-Namba Station
Inside the ticket gates, there’s a standing eating area called Gochibura Namba, for those times where you’re feeling just a little puckish. Ramen, standing sushi bars, and grilled skewers are available, and it’s fun to just drop by and take a peek.

Make the most of Osaka's Namba Station!

Namba Station, where you can head down to Kansai International Airport, and take a casual stroll around Dotonbori and Ebisubashi shopping street in the southern part of Osaka. With access to limited express trains and highway buses, Kansai and the rest of Japan is in the palm of your hands.

You can have a great time shopping and dining within Namba Station itself, and the possibilities of enjoyment are limitless. Definitely make the most out of Namba Station for a fulfilling holiday!